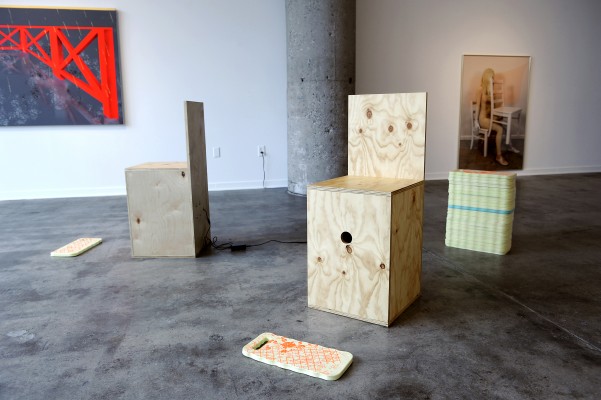 Kupertus’ “Peep Seats” running video loops made collaboratively by the pair, on view for all prepared to kneel. Images courtesy of the artists and Simone DeSousa Gallery.

“Discreet Vulgarities,” which opened at Simone DeSousa Gallery on September 11th, could be accurately billed as a two-person show, featuring the work of photographer, multi-media, and performance artist Nicola Kuperus, and fine art painter and videographer Adam Lee Miller. But it could just as easily be considered a kind of two-headed hydra, with only the technicality of distinctions between two artists who have been in close conversation for two decades of create collaboration, as well as a 17-year marriage during which, according to Miller, they have only spent a handful of nights apart from each other.

On the surface, there are distinct bodies of work that can be instantly attributed to one artist or the other—Kuperus’ contributions largely consist of photography, particularly to capture moments within open-ended performances, as well as interactive sculptures; Miller is a formalist painter of commonplace building materials like gutter downspouts and pine studs, the tight rendering of which initially conceal a series of sly insinuations and vaguely dirty jokes. 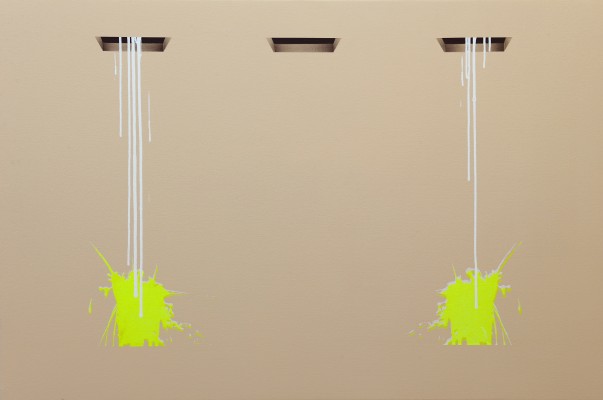 Indeed, insinuation and lowbrow humor is the pulsing thematic of “Discreet Vulgarities” (as the title would suggest)—nothing graphic, nothing overt, but nearly every piece contains a subtle insinuation of the basic animal realities that lie beneath Kuperus’ satin gloves and Miller’s art historical references. Fluids drip from the joints of PVC pipes, gloved hand probe naughtily, two-by-fours emerge from and penetrate painted portals within the canvas. Kuperus’ “Peep Seats” go a bit beyond insinuation, forcing viewers to get on hands and knees if they wish to view through peep holes the collaborative video loops being screened within (foam kneeling pads thoughtfully provided). In another sculptural work, XXX, two wooden chairs nestle seamlessly within each other in a tender tableau of anthropomorphic intimacy. The personification of chairs cuts both ways; a photographic work features Kuperus, in a blonde wig and nude body suit, doing her best to blend in with a stack of chairs, and failing amusingly.

“What A Mess,” the first collaborative painting by the pair. Images courtesy of the artists and Simone DeSousa Gallery.

“Discreet Vulgarities” also breaks some new ground for the pair, who, despite collaborating musically via their band ADULT, have never before created a painting together. Their inaugural effort, “What A Mess” not only ties together a number of the show’s visual motifs—gloves, spills, drips, bright washes of color—but creates a satisfying centerpiece in formally fusing two practices which clearly exist apart only ostensibly to begin with. Kuperus and Miller acknowledge the give and take in their partnership, exchanging help with fabrication or conceptualizing, riffing off each other, making jokes that turn serious—in the way of musicians, of married people, of prime interlocutors. The vulgarities may be discreet, but the impact and resonance of these two artists on each other is obvious, and intensely interesting.