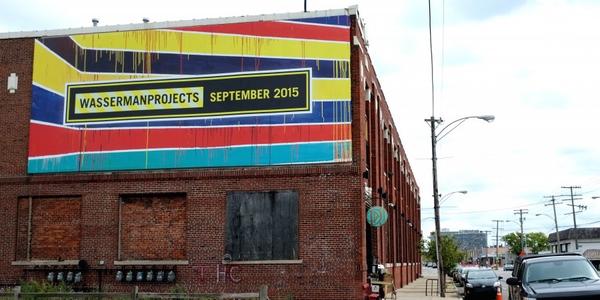 It’s official- the heat is on at Wasserman Projects.

What has certainly been the most hotly anticipated and energetically hyped opening in Detroit’s buzzing Fall gallery season finally exploded last Friday. For the debut of its new, sprawling warehouse-style space in Eastern Market, Wasserman Projects marked the occasion by assembling a nicely balanced klatch of three artists from its wheelhouse, Brooklyn-based painter Markus Linnenbrink, Miami-based architect Nick Gelpi, and Detroit-based sound artist Jon Brumit. Detroit DJ JeedoX was on hand spinning a dazzling array of danceable beats, with guest saxophonist Saxappeal performing on the gallery’s main floor, stepping in and out of the show’s hulking moveable installation, Linnenbrink and Gelpi’s collaborative piece titled TheFirstOneISCrazyTheSecondOneIsNuts. What was instantly clear upon entering the space was that Wasserman Projects is channeling an atmosphere of boundless, cross-pollinating possibility- and that it knows how to throw a party. Outside the entrance an army of valets lingered to provide complementary parking service. Inside, there was a coffee counter, candy kiosk, sumptuous buffet or generous open bar everywhere one looked. In the intimate, tightly interwoven community that is the Detroit art scene, the attendees of Wasserman’s grand opening included everyone on the planet- plus a new and unfamiliar auxiliary from the suburbs, perhaps drawn by Wasserman’s previous identity as a serious gallery located in Birmingham, MI, which up until now has served as Detroit’s Gold Coast of high-end galleries. The festive flavor of the opening was complemented by the playful aesthetic and feel of the work on display, which, even in the overwhelmingly crowded, noisy atmosphere, managed to hold its ground. 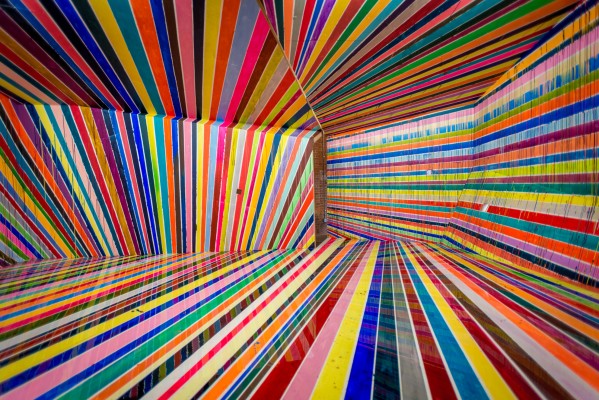 Wasserman’s debut exhibition for its Detroit space is both huge and intimate. The space is literally large enough to encompass self-contained smaller spaces, as in the above-mentioned installation by Nick Gelpi and Markus Linnenbrink, TheFirstOneISCrazyTheSecondOneIsNuts. A full-scale modular home on wheels designed and constructed by Gelpi opens down the middle to reveal an interior painted with bright, dripping bands furnished by Linnenbrink that nearly induce vertigo with their dissemblance to horizontality that veers off into swoops, bends and taut clusters before the viewer’s eyes. The structure was ponderously rolled open at the reception by the Wasserman Projects team as microphoned security docents anxiously waved the audience back- for a moment, the movement of the house as it cracked open like a gargantuan egg took on an uncanny whiff of rupture and destruction. The ghosts of a million destroyed homes and displaced families from the neighborhoods surrounding Eastern Market stood at the door- then all was in place, and the audience could step inside and take selfies against Linnenbrinks’s masterly bands of pure color, which are ruptured at intervals by paint drips that limn offhandedness and fierce control. 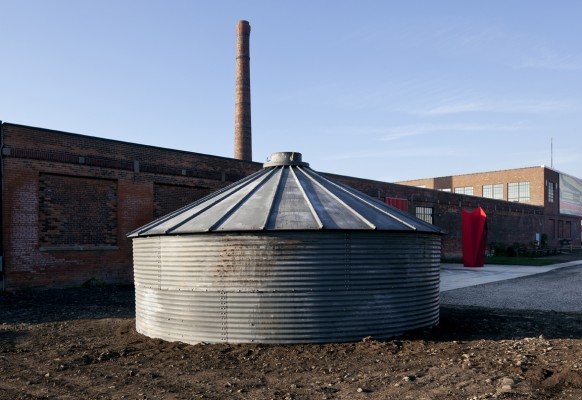 This underlying theme of connection to the rhythms of the city Wasserman Projects has made its new home popped up again in two sound-centered works by Jon Brumit. One resides in a roughhewn structure that resembles a ring of voting booths, atop which the artist perched during the opening, mirroring the performative role of DJ JeedoX across the gallery. The subtle, vibrant sounds Brumit caused to issue from small plastic models of pastries hooked up to old-timey radio speakers, one installed in each booth, were hard to catch over the venue’s blasting soundtrack. Brumit’s other installation, located outside the gallery, provided a perfect escape from the bright, insistent visuals inside the Wasserman space. One ducks into a low doorway cut into the decapitated peak of an industrial silo and sits in near total darkness as a motion-activated, base-heavy sound piece thrums right through the corrugated metal walls and thrusts the body into the microcosmic- like how it would feel to be an atom deep within a stereo speaker. A third sound piece will be broadcast over FM radio on channel —-, completing the exhibition’s engagement with its locality through channels visual and sonic, overwhelming and penetrable. And, in 2016, Belgium-based artist — will bring his massive project—, including a population of live chickens, to Wasserman Projects. As of its grand opening, this space is doing canny, subversive justice to its new location- almost tempting one to wonder what Wasserman Projects won’t roll open in the next few years.