“While the native breeds that descended from the  original chicken (the Red Junglefowl) are evolutionary  dead-ends (being shaped to reflect the typical cultural  characteristics of its community), Vanmechelen’s  cross-breeds are solutions. Many years of  crossbreeding have proven that each successive generation of hybrids is ‘better’. It is more resilient,  it lives longer, is less susceptible to diseases, and it exhibits less aggressive behavior. Genetic diversity is essential, proves the Cosmopolitan Chicken Research  Project(CC®P), which studies the various CCP Hybrids.”-From Koen Vanmechelen’s artist statement/bio, on “The Cosmopolitan Chicken Project” and “Energy/Mass” 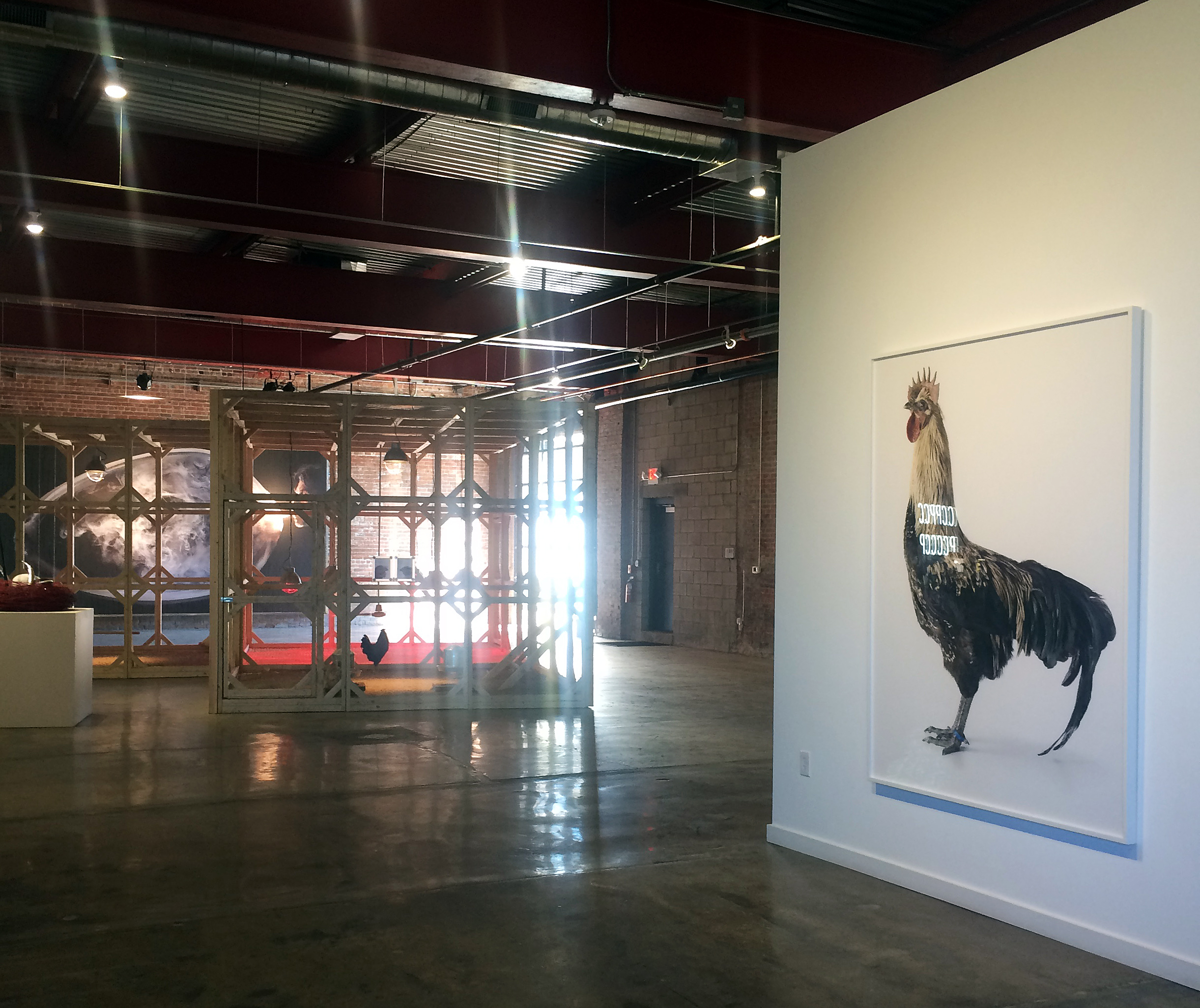 I walked into “Energy/Mass,” the current exhibition at Wasserman Projects, wondering about the distinction between art and science. Having only heard and seen a few snippets of information about the artist, Koen Vanmechelen, and his work, the main question I took in with me was, “how is this art?” This question, in light of many of the openings/panel discussions/bar conversations I’ve found myself in lately, has been puzzling me more and more. There’s much talk, these days, of visual art claiming its rightful place in the hierarchy of sciences, and the importance of visual art (and the humanities at large) in unpacking, interpreting, and finding unique insights into such disciplines as history, mathematics, social justice, and hard science. I fully support this idea- at the same time, it opens a new strain of questioning about what, precisely, can be classified as art practice within the practices of science, academic research, and political activism. Where does studio practice end, and interdisciplinary research begin? How does the one inform the other? An intriguing example of the fertile union between science and art, and how studio practice can maintain its autonomy while exploring in other disciplines, can be found in “Energy/Mass.”

As Wasserman gallerist Megan Keeley reminded me while walking me through “Energy/Mass,” the scientific aspect of the show is hardly trafficking in cutting-edge research. The science of “Energy/Mass” is pretty bare-bones, accepted knowledge of biology and genetics- the processes by which organisms (in this case, chickens) reproduce, and the results of introducing new material into an isolated genetic pool. What “Energy/Mass” explores is a lyrical, artistic interpretation of that long-studied process. The work in “Energy/Mass” presents an aesthetic exploration, backed up by intensive research and field practice, of the processes of reproduction, the surprisingly graceful allegory these processes present for social, historical, and artistic practices, and the vital role visual art can assume in the binding and bridging of disciplines- biological, historical, social, political, and aesthetic.

“The Cosmopolitan Chicken Project” centers on the breeding of chickens. A large coop inhabited by live chickens dominates the exhibition, and exposes its beating heart. Being serenaded by roosters while wandering through a gallery is an unusual experience that made me wish I could incorporate audio into this review. 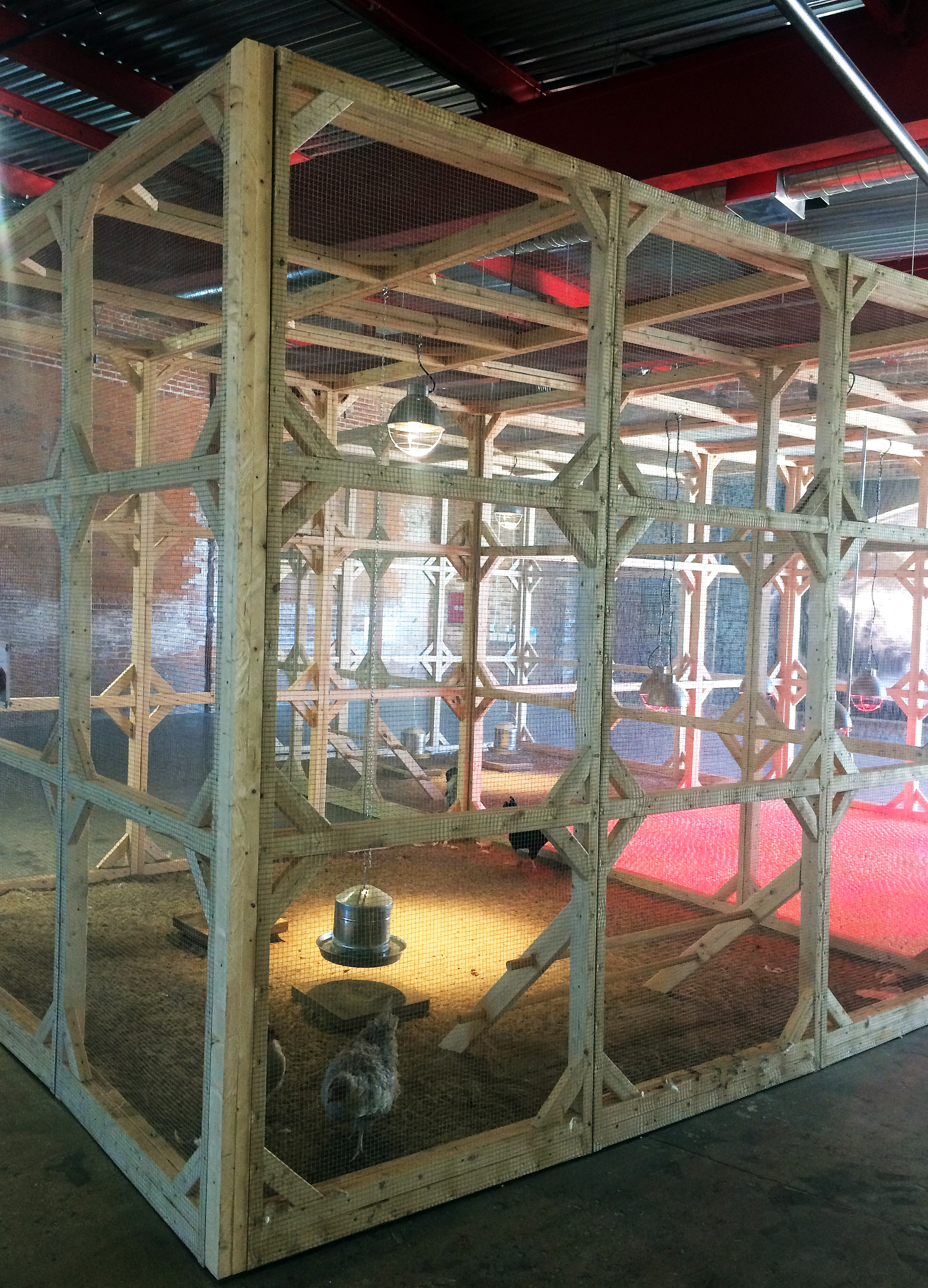 Vanmechelen chooses his breeding combinations based upon human-made geographical boundaries. This illuminates the impact of historical nationalism/xenophobia/political activity of humans upon the processes of natural selection and genetic descent. Apparently, we require the flora and fauna within our geographic boundaries to reflect those boundaries as much as our history and politics do. What results, manifested in regional livestock, is, in the context of this body of work, almost numberless distinct breeds of chicken, each iconic of its geographic region.

Vanmechelen’s “Cosmopolitan Chicken Project” is now in its twenty year generation. It has leapt, genetically, from country to country in a migratory pattern that echoes the migrations of humans from one culture to the next on our journey to globalization. The documentation of this fertile chain- from Europe through Asia, Africa, Australia and into the Americas- is displayed in “Energy/Mass” in works encompassing painting, sculpture, and mixed media incorporating taxidermy (all of the physical specimens that find their way into Vanmechelen’s body of work lived long, healthy lives on his incredible farm in Belgium, and died natural deaths prior to their incorporation).

These lyrical, aesthetic explorations of the sublime subject of birth and reproduction are backed up with huge, red leather-bound volumes filled with indecipherable genetic codes that strike the layman as obscure, and essentially aesthetic, as the more specifically visual works.

This work distills geographic migration- a process which bonds and strengthens- a powerful reminder for us in these strangely xenophobic times. When so much of our political discourse revolves around fear of the other, penetrating our shores, muddying our genetic pool, this work presents a simple, undeniably scientific truth- that cross-breeding, introducing new elements into a long-established system, can only empower.

“Energy/Mass,” A solo exhibition of work by Koen Vanmechelen, is on display at Wasserman Projects through December 17, 2016.