The actions and words of our latest president, the bizarre but predictable choices for his cabinet and advisors, yesterday’s horrifying news of 200 civilians dying in the new president’s escalated bombing of Mosel, Iraq, so reminiscent of the televised Vietnam War — all of this makes us think of the moment of Richard Nixon and of events leading to and following that debacle. Simone DeSousa Gallery presents a collaborative exhibit that beat MSNBC and the other news networks to the punch in this realization. The show, “Delights of the Garden,” is a collaborative meditation/installation on the Vietnam War by Ben Hall, Andrew Mehall, and Jason Murphy, three Detroit artists who are too young to have been there, but who are very conscious of Trump and company’s echo of historical circumstances. 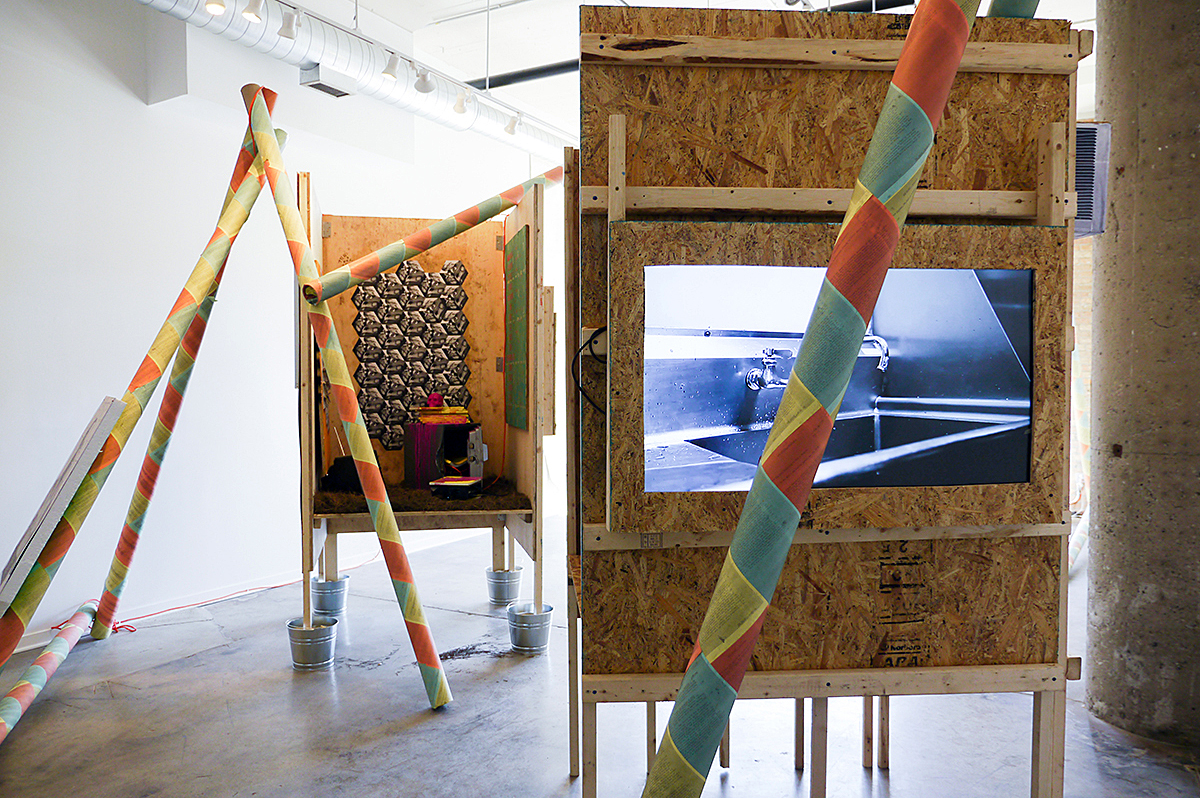 Entitled after the 1977 album “Delights of the Garden,” by the Black Nationalist, proto-hip-hop group “The Last Poets,” the installation is composed of objects, graphics, and videos, an array of materials implying comparisons between the nightmarish circus of the Vietnam era and our contemporary landscape of White House clowns. The album itself listened to by the artists in their youth, is a taut, poetic narrative of the everyday life of the Vietnam era in the face of horrors of nuclear annihilation. It doesn’t narrativize the installation; in fact, as a credit to the artists, it is not even used as a soundtrack for the exhibition but provides a psychological landscape and an amazing evocation of black consciousness at the time. It’s a reference, rather than a part of the installation itself, and well worth (re)listening to, perhaps before visiting the gallery. As such it evokes the condition of young black men forced to go to war while living in a world of excruciating racial prejudice, and thus forced into becoming cannon fodder for an imperialist aggression. (Also check out Defense Secretary Robert McNamara’s “Project 100,000,” a plan that allowed the drafting of mentally or medically unfit soldiers into the Vietnam War). 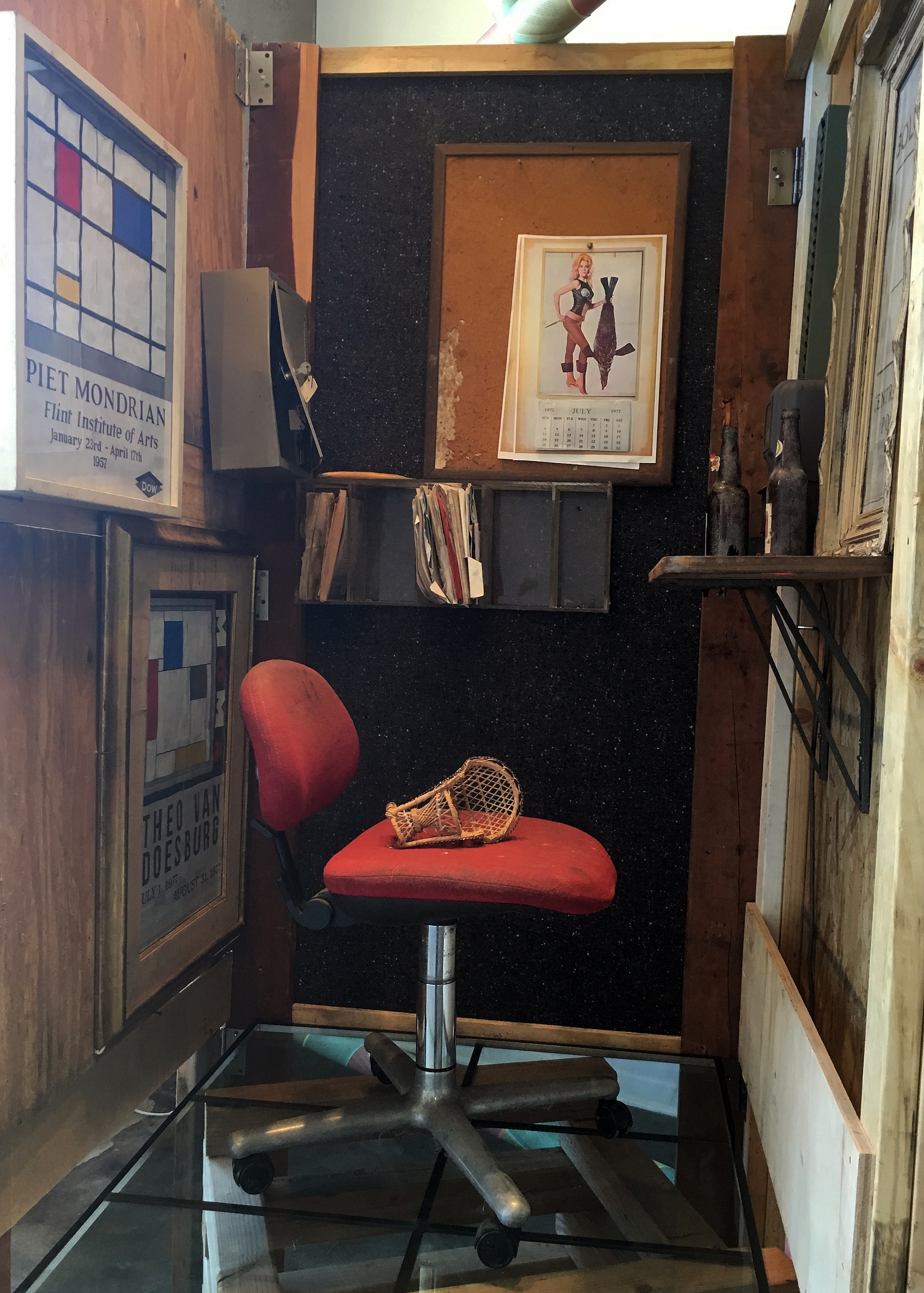 The gallery installation is centered around three dioramas that suggest or frame implications about the culture of the Vietnam era. They are, like many modernist abstractions, inscrutable and need unpackaging. One of the dioramas, containing images of abstract DeStijl artist’s posters, appears as an active studio, a glass floor and modernist office chair, suggests a walk-in painting by Mondrian himself and implicates Dow Chemical in supporting modernism. Dow Chemical, a Midland Michigan based company, was the manufacturer of Agent Orange, among other defoliants listed with banal, cartoony names, in the exhibition, responsible for cancers and the birth of deformed children, that resulted from its use. Anchoring the exhibition on the back wall of the gallery is a remarkable group of fifteen paintings, by the artist-curators, of mission patches that were created by soldiers and worn on their uniforms. These were not official military patches but were designed as unofficial commentary by soldiers, and judging by the content of cartoons such as “Snoopy” and “Felix the Cat,” many of them were quite young. Perhaps most disturbing patch is the “peace sign” inscribed with the words “Footprint of the American Chicken,” ironically of course, since the Peace Movement was an effort to save these same young men’s lives. 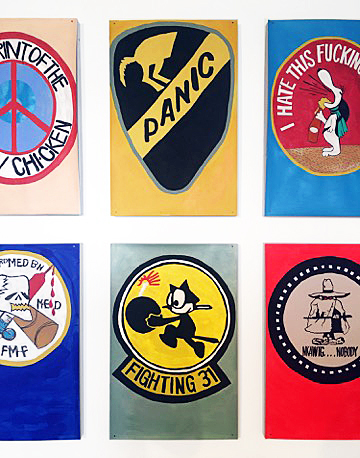 A prominent design feature of the exhibit is a group of long, tubular columns, crisscrossing the gallery and papered in Harlequin-patterned copies of the Pentagon Papers. Uncertainly the Harlequin pattern, a common evocation of Commedia del’ Arte theater, may signify the circus atmosphere of the Vietnam era and the hysterical, comic atmosphere of the Pentagon Papers themselves, and especially the interchangeability of comic figures participating in both Vietnam history and contemporary White House charades. Nevertheless, the Pentagon Papers and the subsequent melodrama of the Watergate break-in, including all of the players in the Watergate cover-up, are featured in the exhibition’s graphics. John Ehrlichman, G. Gordon Liddy, E. Howard Hunt, John N. Mitchell, especially Robert McNamara and Henry Kissinger: these are names all too familiar to anyone who grew up during the Vietnam era, and prefigure current White House players. There is little narrative description of the roles of these actors or of any of the events that took place, but rather the exhibition serves as a prompt for remembering and revisiting the moment while providing a continuing context for thinking about contemporary events. “Garden of Delights” is then a kind of modernist historical sculpture. A text by renowned artist/critic Donald Judd is supplied with the exhibition to warn of the dangers of nationalism and its effect on artistic practice and is a reminder that nationalism, the trademark of our new Presidents regime, affects not only political thinking but our overall ideology. 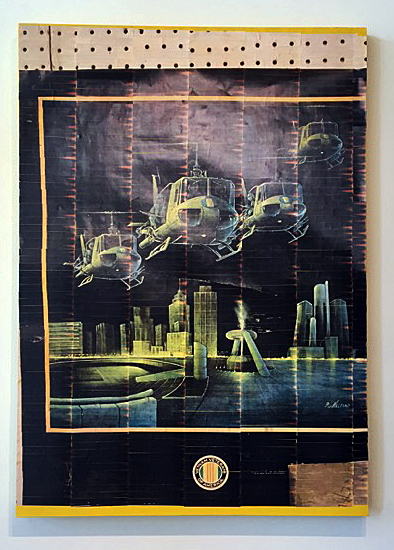 One particularly poignant poster in the exhibition, a copy of which hangs in the Old Miami Bar in Midtown Detroit where Vietnam veterans congregate, is a rendering of iconic Huey helicopters hovering over Hart Plaza on Detroit’s riverfront. It’s a chilling sort of cartooned fabrication that reminds us of our Detroit soldiers who lived and died in that hell. In a separate video on one of the dioramas the famed helicopter is also featured as a toy being pushed into a stainless-steel sink, simulating the dumping of Hueys off aircraft carriers in the evacuation of Saigon in 1975.

We rarely see politics and war as the focus of contemporary art and with a semiological strategy of signing not explaining, “Delights of the Garden” is remarkable installation. It’s a painful reminder for those who grew up amidst the assassinations of the Kennedys and Martin Luther King, the inevitable and necessary birth and growth of Black Nationalism, of the racial revolutions in Detroit and Newark and the rest of the country, of the Watergate cover-up, with resounding echoes in the current White House as well as the rest of America.

Join artists Ben Hall, Andrew Mehall, and Jason Murphy for an informal closing reception for “Delights of the Garden” on Saturday, April 8, 5-6 pm.