Have+Hold, a collaboration of Wasserman Projects and Butter Projects

Showing me around the exhibition Have+Hold, a collaboration between Wasserman Projects at Eastern Market and Butter Projects, formerly based in Royal Oak, curator Alison Wong mused about the concept she and her partner, John Charnota, envisioned when they founded Butter Projects, a multi-purpose gallery space, studio, and community hub for artists that’s been fighting the good fight since 2009. Like the ubiquitous dairy product of its naming, the space was conceived, Wong told me, to encapsulate that essential quality, oft overlooked, that makes everything it touches better. For artists those essentials include space to work and a community engaged in opening dialogs and forging new friendships. Wong and Charnota now command well-earned respect in Detroit and beyond for their brilliant aesthetic and their knack for assembling beautifully serendipitous group shows. 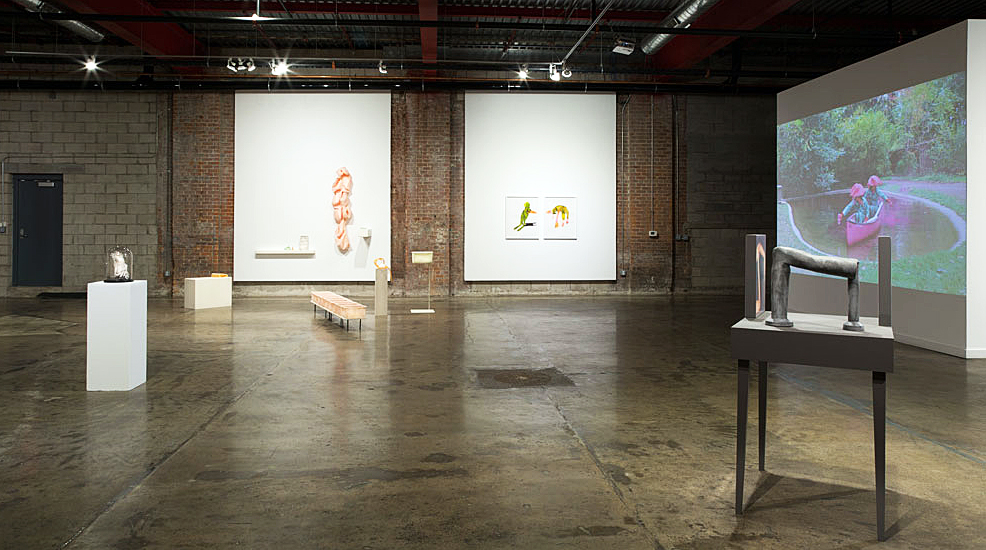 The dearth of prominent female curators has been a topic of conversation around Detroit this summer. Wong, who curates for Wasserman Projects as well as Butter Projects, is on the vanguard of bucking that trend. She has easily transitioned from the intimate scale of Butter Projects to the off-puttingly huge Wasserman space with a cluster of exciting exhibitions. Have+Hold, however, breaks the Wasserman mold somewhat. There’s a warmth to Have+Hold that I haven’t seen in previous Wasserman shows. There’s a healthy emphasis on craft and the (often literal) presence of the hand- the human figure and how it meets and draws nourishment from its environment is the subject of many works. The works don’t feel enshrined in the sprawling space. Each is as inviting and approachable as it would be in the artist’s studio, with the space around them allowing for a more lingering, meaningful exchange. Even still, the works flow and accentuate one another- this is genius curating.

The show begins with a haunting wall of water media paintings by Loren Erdrich, comprising snapshot-like portraits and intimate, raw studies of limbs. 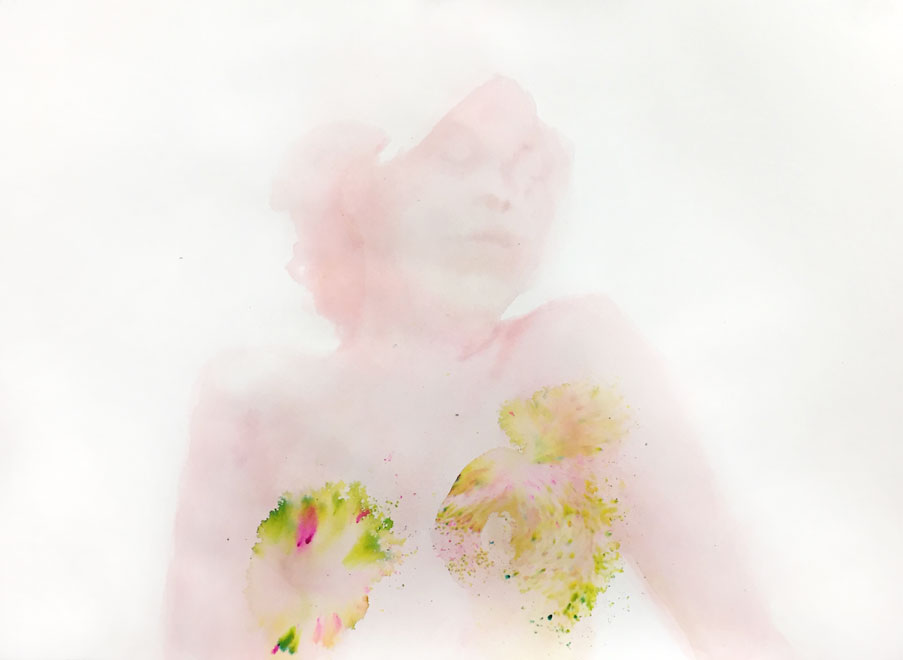 Erdrich’s paintings encompass the most traditional approach to the figure in the exhibition, despite their striking palette and unusual perspectives. From here, things get more wayward. Like stumbling across a sprawled couple in a dark house at night, it’s a bit of a shock to come from the paintings to Kasper Ray O’Brien’s sculpture “Take Me Home.” Made especially for Have+Hold, the piece places two pairs of legs extending across the floor in suggestive semi-undress. The couple’s feet cross just slightly in a gesture that could imply either platonic or sexual intimacy. The dismembered state of the legs ought to feel macabre but doesn’t at all- they evoke a physical turning of joints toward the warmth of another body that you remember in your own flesh while interacting with the piece. 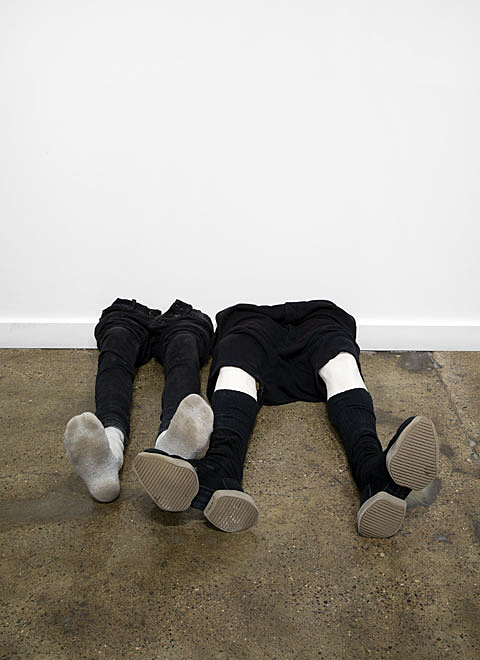 Juxtaposed with O’Brien’s work are two films by Margaret Hull. “Lightly Touched By” is a beautiful meditation on the surfaces of the body, with the artist drawing a latticework of lines onto her hands and feet with a makeup crayon. This ritual body mapping reinforces the visceral response that “Take Me Home” begins to evoke. The nature of tactile memory is further explored in installations by Shane Darwent and Sophie Eisner. Eisner’s assemblage of objects made from cast silicone, titled “Soft and Heavy,” suggests a utilitarian space of platforms and mundane vessels, soap cups, washtubs. Her creamy pastel palette and soft, drippy material render these objects not only seductively tactile but almost edible. Darwent is rapidly establishing himself as a young artist to watch. His structures, which use architectural materials and razor-sharp, life-sized digital prints blur the lines between actual objects and renderings of them, trafficking in a new spin on trompe l’oeil. Heaviness, the inevitability of collapse, the awkwardness of exurban sprawl, and the arbitrariness that defines what is “well-built” all find their way into his work, with unsettlingly cinematic lighting straight from David Lynch.

Ellie Krakow’s mixed media sculptures that combine finely wrought casts, hand built ceramic of torqueing elbows and shoulders with photographs of arms and hands mimicking the cast positions meditate in a cooler, more conceptual way on the nature of embodied movement, while Margo Wolowiec’s woven pieces are a delightful surprise, roping yet another handcraft into Have+Hold and resembling the layered, slightly offset strata of thought processes and memory. 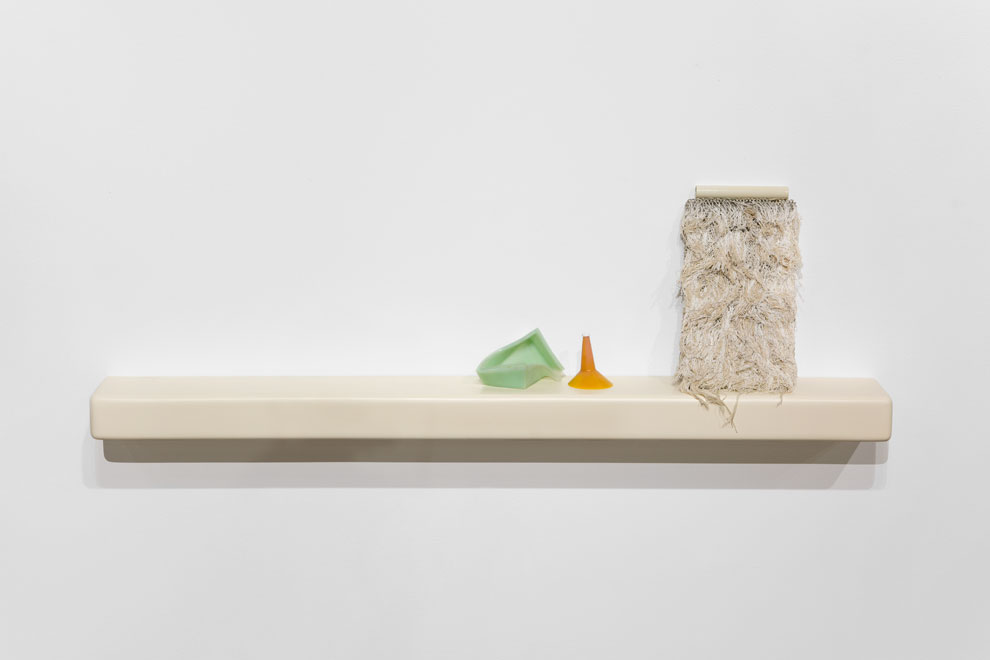 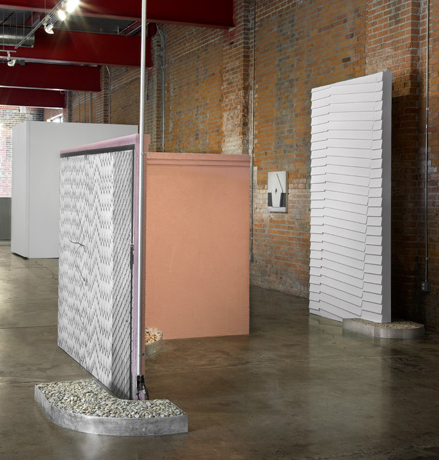 Don’t visit Have+Hold if you’re in a hurry- it’s worth it to take in the broad sweep of the show then slow down and spend a little time with each work. The warmth of the show I referenced above opens most fully with a little lingering and savoring- a harkening back to when life was made up of such moments. Movement, touch, intimacy, homing, and connection well up in a visceral, embodied experience of work well conceived and wrought with love. Have+Hold reminded me that a good show should grab hold of all your senses and leave them stirred and warmed.