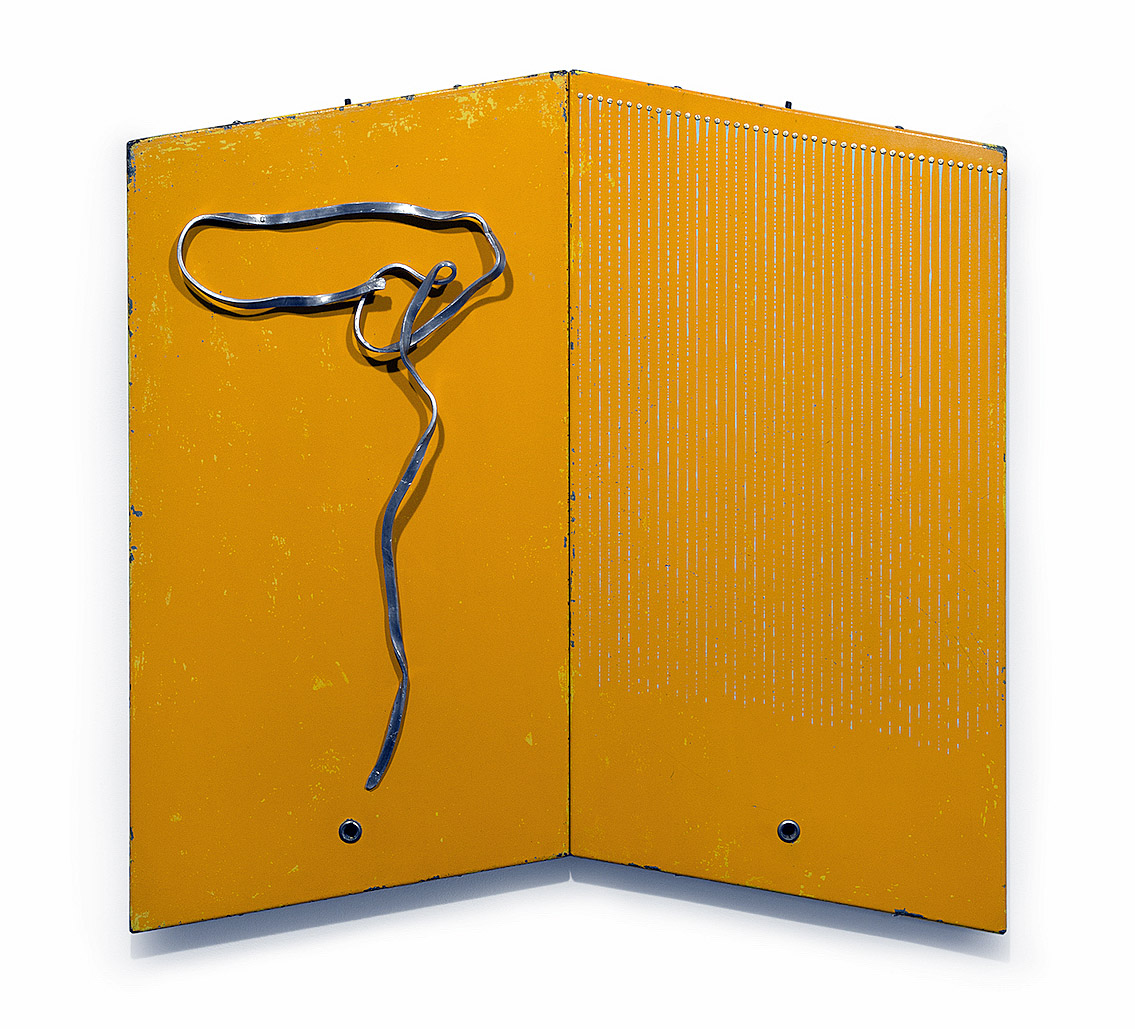 The title of Sharon Que’s current exhibition at the Simone DeSousa Gallery is  taken from one of her sculptures, “Vaporous Quill” which is also a phrase from a poem, “Not a Word in the Sky,” by British pop singer Shiela Chandra. Both Chandra’s poem and Que’s sculpture have an elemental simplicity that beguilingly explores the universe. The poem, in a voice of miraculous clarity, negotiates the sky, searching for some perhaps existential explanation, a language or word, in the vaporous horizon. The sculpture is composed of two amber-yellow, quadrilateral metal panels that, juxtaposed, mirror each other. One panel is subtly inscribed across the top with brass rivets from which fall, like rain, faint blue streaks. Attached to the adjacent panel is a thin strip of aluminum, finagled and caressed into the shape of a wisp of smoke. This is how it goes with Que: enigmatic objects elegantly finessed of hand wrought materials– wood, steel, bronze, glass—arranged in a conscious geometric scheme.

Another sculpture, “Listening Device” is composed of a 3-dimensional, geometrical shaped wire figure embraced by a small painted root and twig system which is “connected” to a small, golden funnel shape. Its title suggests that it is a technological instrument or machine. Both pieces take time to negotiate as does each of the seventeen, small sculptural works in the exhibition.

In the brief gallery guide for the exhibition Que has written: “There is a scaffolding system that exists for each of my sculpture exhibitions made of the interactions with people, nature, music and art that I have come across accidentally or made great efforts to experience.”

This is not, it seems, a simple prosaic statement but one of specific structural purpose. Each of these elements is part of her system of perception and selection of materials and each of them figures into the creation of the final object. There is a strange science at work here. In the same statement, she says “My imagery can take the form of data visualization algorithms.” This isn’t the usual account that an artist might make about how their art looks and works. This is language that comes out of the complex world of information engineering. Que is setting up a platform, the ontology, for her sculptural works. 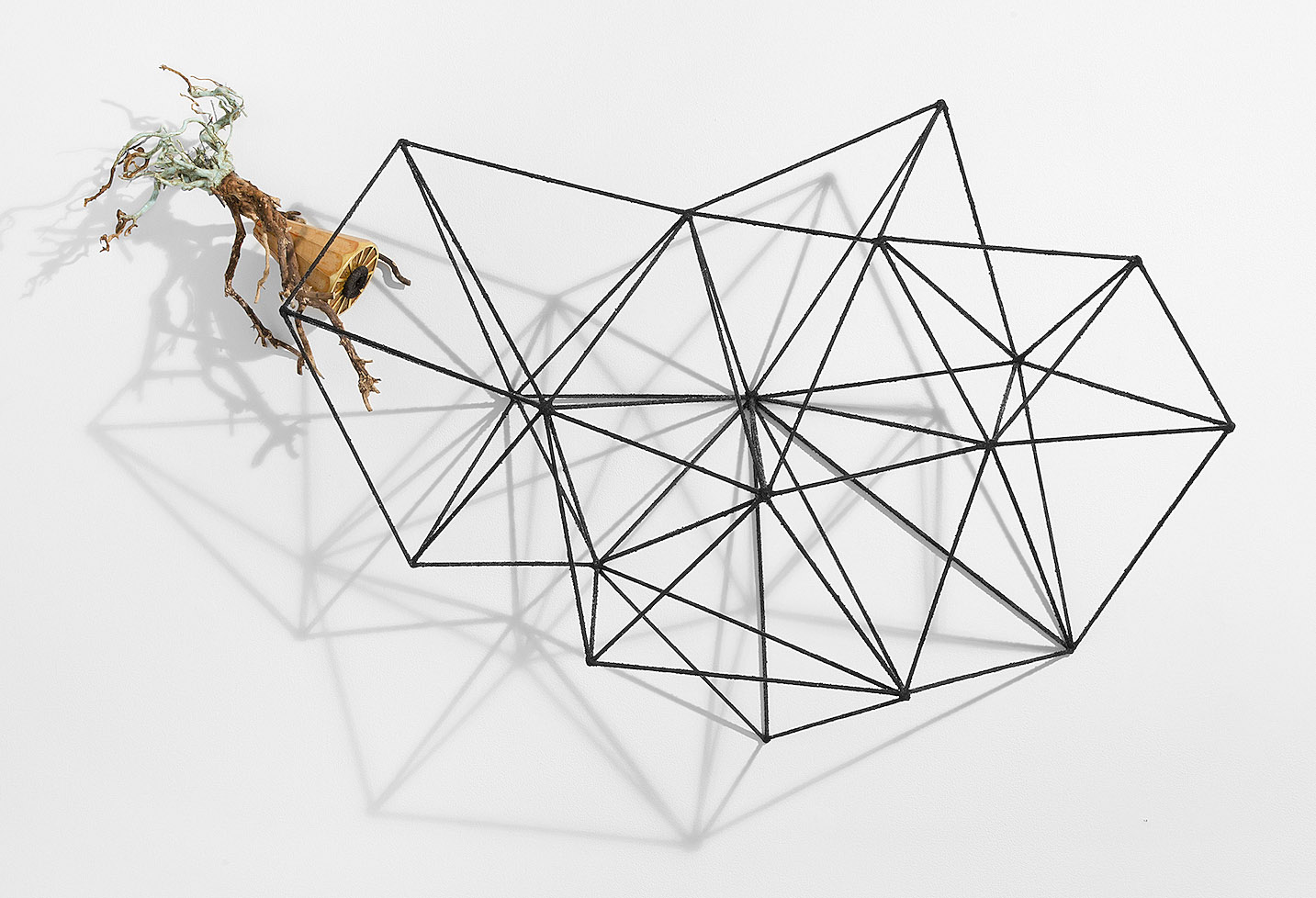 With this in mind, “Listening Device” becomes a complex metaphor about the process of hearing and consciousness. The poet William Carlos Williams said “The poem is a small machine made of words.” Que’s sculpture is similarly a machine. From the complexity of roots and branches interconnecting to the complex crystal structure of nature (illustrated by the wire figure) to the funnel shape of satellites, “Listening Device” is a model or prototype of a hearing machine.

Que regularly references her family’s engineering background and she, herself, was a wood model maker in the auto industry before translating that profession into a violin restoration career. Thus, her art exhibits some considerable skill in handling a diversity of materials—including metal casting and fabrication, wood working, drafting skills, letter press printing–and the inventive forms that her sculptures take suggest a larger, macroscopic, engagement with the world.

Throughout “Vaporous Quill” there are images and illustrations of the elusive phenomena of magnetism. In each of the three “Quiet Revolution” sculptures, for example, there is a print of a woodcut that Que tooled, illustrating the polar forces in an electromagnetic field. “Quiet Revolution 2” appears to diagram the dynamics of a group of orbiting bodies, suggesting in their overlapping trajectories the possible intimacies of their interrelationships. Modestly constructed on a piece of varnished plywood it is beguiling and provocative. Que wrote in her introduction to the Vaporous Quill: “This exhibition is a three-dimensional journal.” The sculptures then function as journals do, notes and speculations on her perceptions of everyday life. It’s a lovely idea. 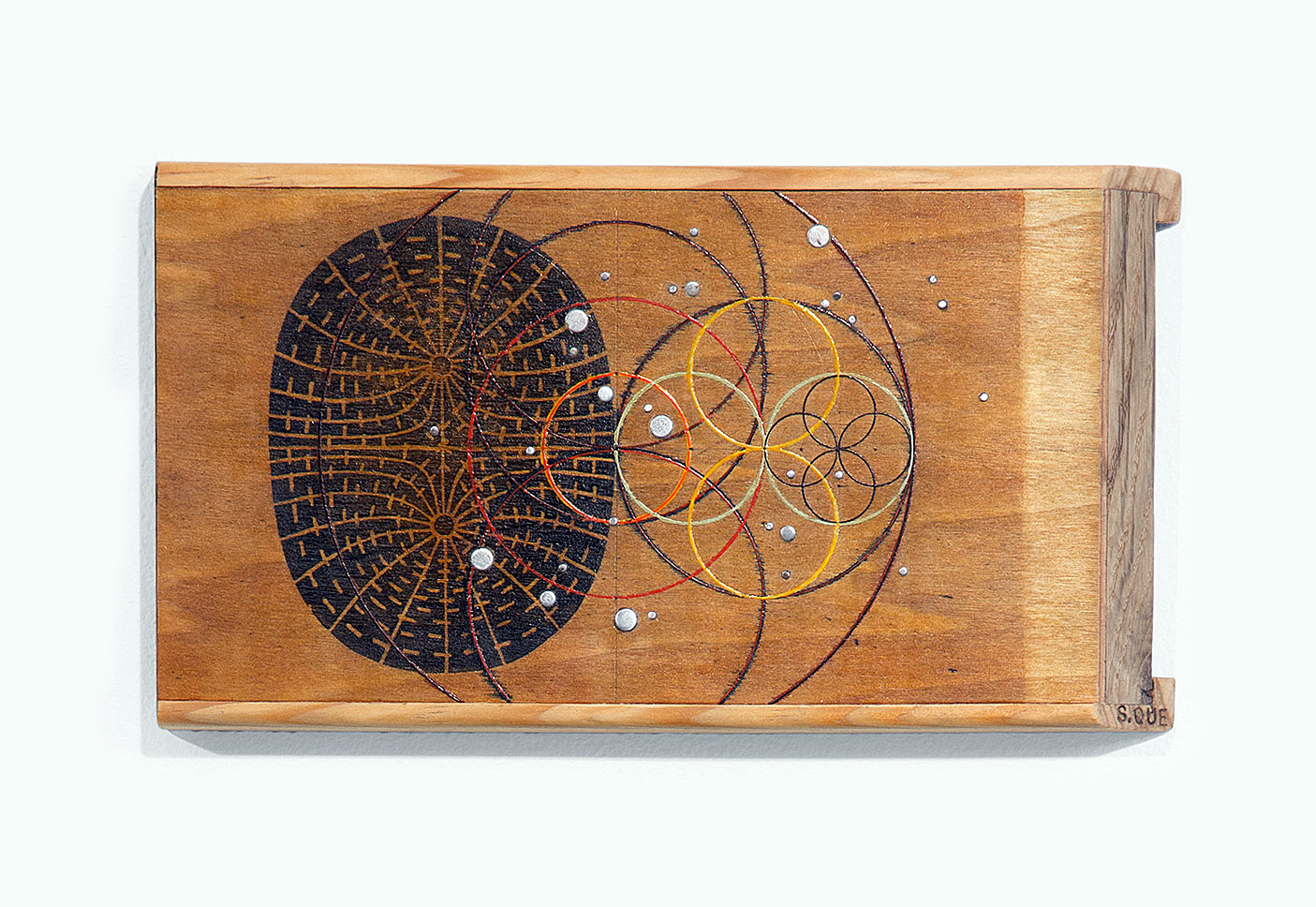 With this science in mind then, “Capture,” a small, almost jewelry sized sculpture, composed of cast bronze balls and steel chain, seems to illustrate one of the prime phenomenon of particle physics, the incomprehensible “electron capture.” If “Capture” is considered metaphorically, in the realm of Que’s world, it may lead to speculation on everything from love to nuclear holocaust. I think there is a bit of the comic in Que.

Que is an artist of ideas, as well as beautiful objects that explode into a long trail of speculations and readings of what they are “about.” Her art is much less abstract than one might at first think. One imagines her advancing into the world, exploring for more and more connections, and bringing back from her sojourns pieces of the world to connect herself to the world and its infinite magnetic connection. 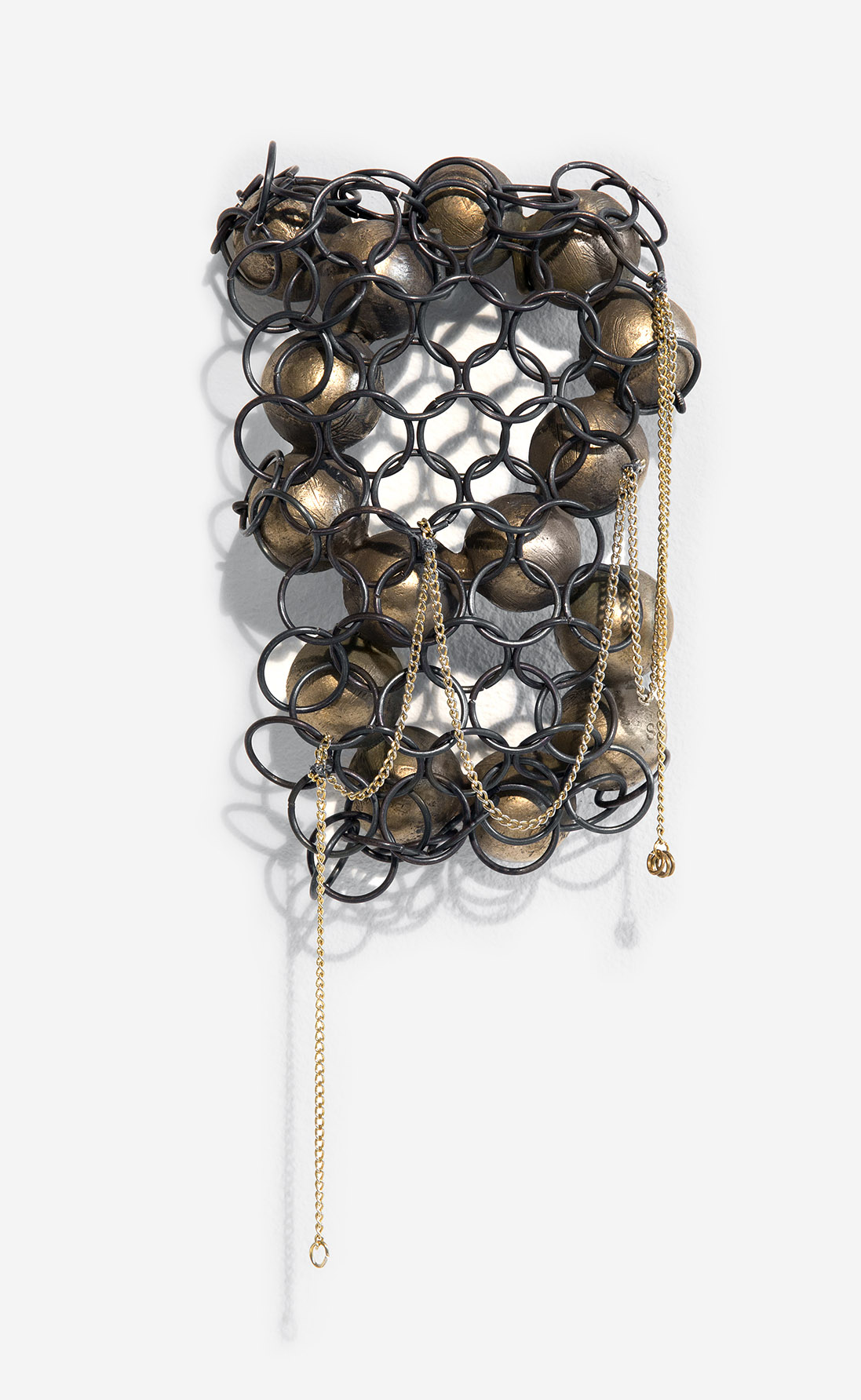