The large black and white, houndstooth checkered cotton swatch hanging on the back wall of the Simone DeSousa Gallery has a diagonal slash across the middle with surgical suture-like stitching holding it together. The sutures cause the fabric to pucker and wrinkle causing a misalignment. Also, punctuating the iconic patterned piece of cloth are mended holes and peculiar embroidered, abstracted shapes. At first sight Mark Newport’s “Amends,” a fragment of cloth that could as well been a fragment of a dated men’s sport coat, appears benign and almost barren. Slowly, however, the ten pieces in the exhibition “Mark Newport: Stitches” gain traction, and a vocabulary of his work develops.

Mark Newport, Artist-in-Residence and Cranbrook Art Academy’s Fibers chair, is best known for his hand-knit, acrylic yarn Superhero costumes. The full-body, knitted costumes of established pop culture’s superheroes–like Batman, the Rawhide Kid, and Spiderman– and others from Newport’s own imagination–Sweaterman, Argyleman, Bobbleman– are life-sized costumes that satirize and perform a feminist critique of male dominated cartoon adventure as well as of the “women’s work” that the craft of knitting symbolizes. Like the empty skin of an animal each of the knitted Superheroes ironically execute a strange and disturbing lifeless dance awaiting the human imagination, searching for emancipation, to animate them. 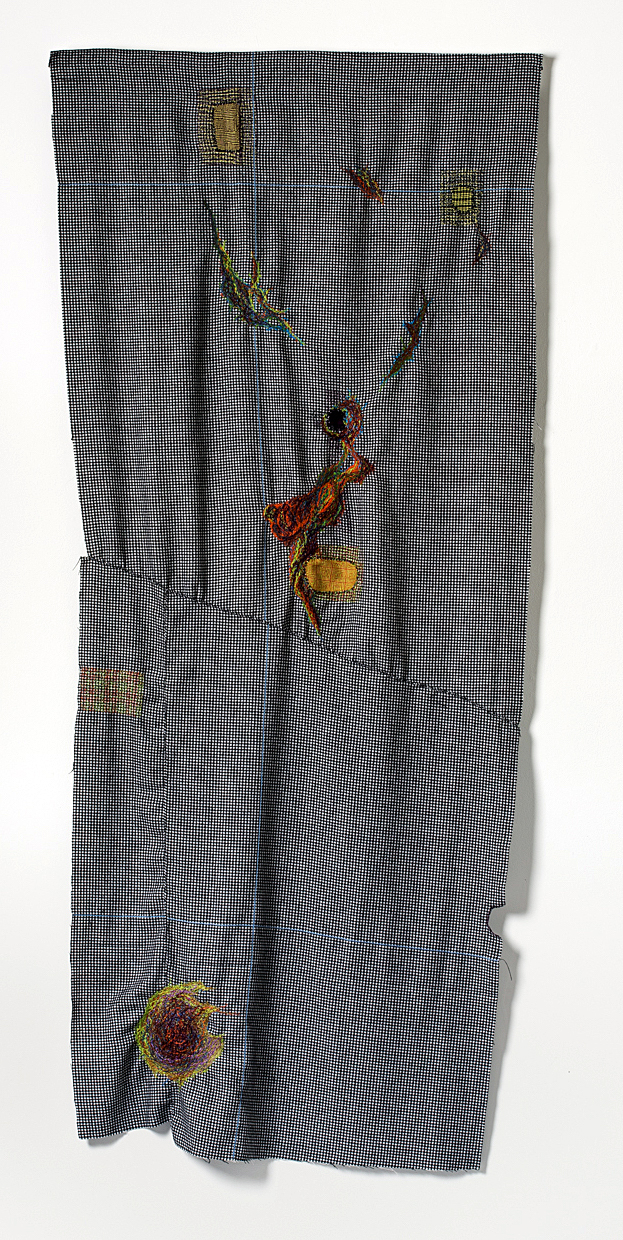 The evolution from his figured, wearable superhero costumes to the current, abstracted, more or less two dimensional images, establishes a symbiotic relationship between the body and its clothing. Superheroes are the opposite of the vulnerable individual body, they are the outward sign of invincibility, and represent in pop culture, that something to believe in. The violent appearing slash across the houndstooth swatch in “Amends,” on the other hand, is a horrifying assault on the conservative, safe, sartorial sign that the houndstooth pattern represents. Like the chain-male of medieval armor, its meshed pattern is an image of self-defense. Its sutured repair is grotesque because it reveals bodily vulnerability. The puckering and wrinkling cloth is the scarred-for-life result. The hanging cloth then is not only the individual body but the image of the collective history of our body.

“Amends” has three holes that have been mended with patches and weavings of other material. In each of Newport’s ten pieces, holes in the cloth suggest both violations and injury to the body’s skin, and their repair a kind of healing. As in healing, mending and repairing is often stronger than the original cloth and becomes something else, a scar, a hybrid perception, and the material is no longer fabric but has become flesh.

Newport has recycled three shirts, five repurposed swatches and two muslin, canvas-like pieces, to execute his mending and, most spectacularly, his embroidery. Two of the shirts, “Redress 3” and “Redress 4,” hang upside down on the gallery wall as armatures for his needlework. Like the tattooed skin of Japanese Yakusa gangsters which are harvested after their death, the shirts hang mercilessly and seem to tell a story. “Redress 4” is an archetypal blue, corduroy shirt with, like a target, a lime green cross-hair stitched across the back. A hole (bullet?) is patched with hand woven houndstooth pattern out of which an embroidered fiery flame explodes. “Redress 3,” a white, almost shroud-like “dress shirt,” a “business man” shirt with four wound-like holes, expresses the same complexity, signifying moments of history, social status and injury. 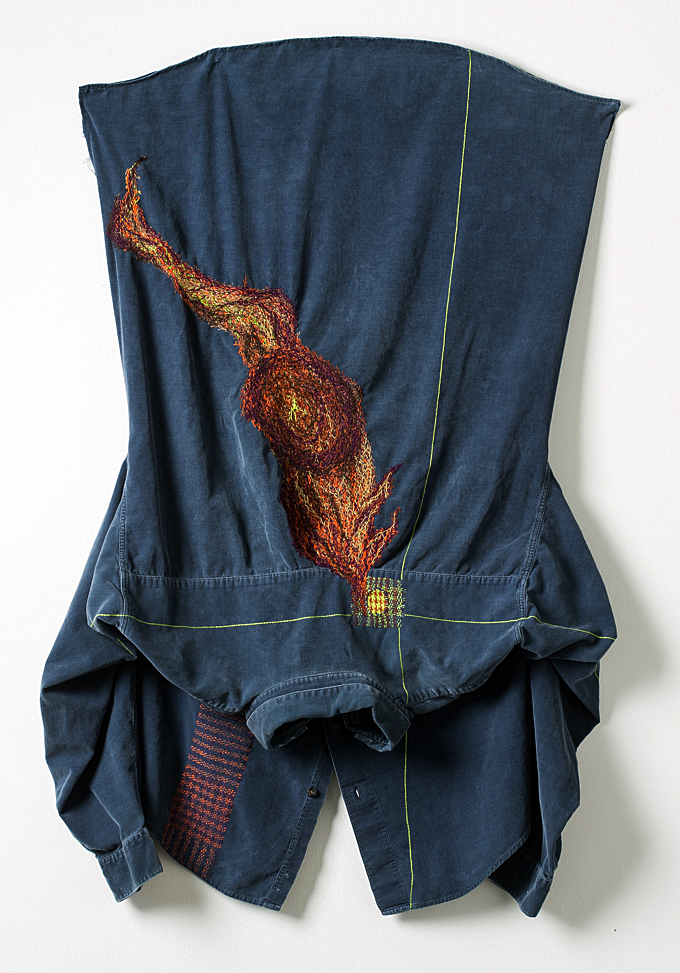 One of the simplest pieces in the exhibition but which may need the most attention is “Repair 4.” A swatch of classic, blue and white, cotton seersucker shirt has a repaired hole. The hole has been repaired with black and white houndstooth wool. The overlapping, transitionary stitching is made with black and white thread creating a muted, almost soft focus image. It is difficult to say that this is a beautiful image, but in its complexity, it is! To unpack appropriately one might need to know that each pattern of cloth has a specific role and identity in sartorial history. Seersucker is a light weight summer fabric famed for its wear by, especially southern, the more genteel classes. Its cultural history is legendary and fraught with issues of class snobbery and elitism. Hounds tooth on the other hand was historically worn by sheepherders in nineteenth century Scotland to keep their nasty weather at bay. It is bound to heraldry and class and clan rivalry of Scotland. To cut to the quick, this clashing cultural history and Newport’s nimble stitching has created a hybrid image/object that befuddles perception and that signifies the complex role of our relationship with textiles. 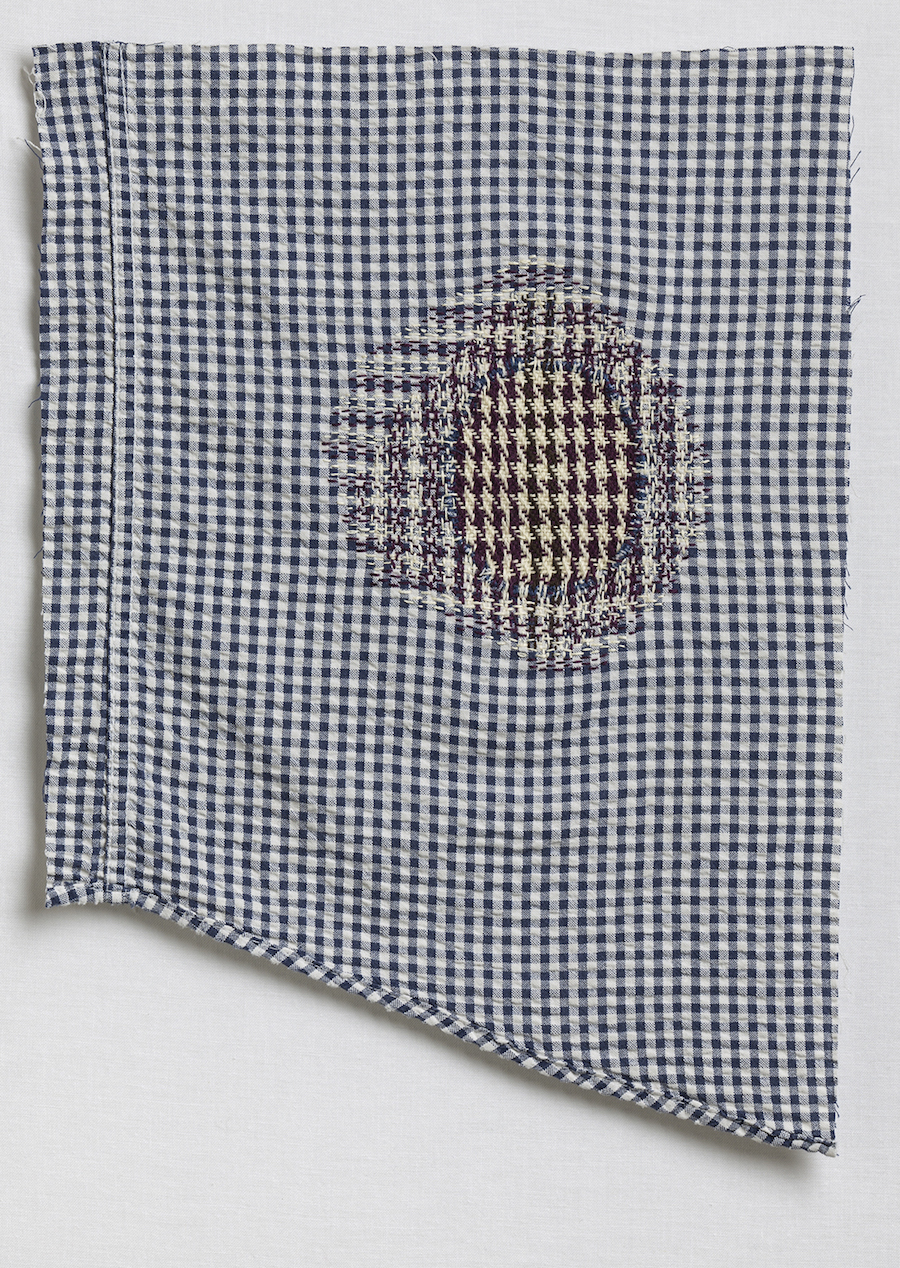 Every work in “Mark Newport: Stitches” has provocative personal, social and cultural history that bears scrutiny. One of the persistent thoughts when exploring the heavily embroidered areas of Newport’s work is the interconnected nature of stitches and images. One of the works on muslin, “Mend 12,” has a sampler-like array of stitches, colors and patterns. Reminiscent of dynamics of Rhizome stem patterns that grow horizontally (think mushrooms) underground, Newport’s stitches create networks that reach out and bloom out with a galaxy of colors and then traditional patterns that speak of our own complex sartorial history. 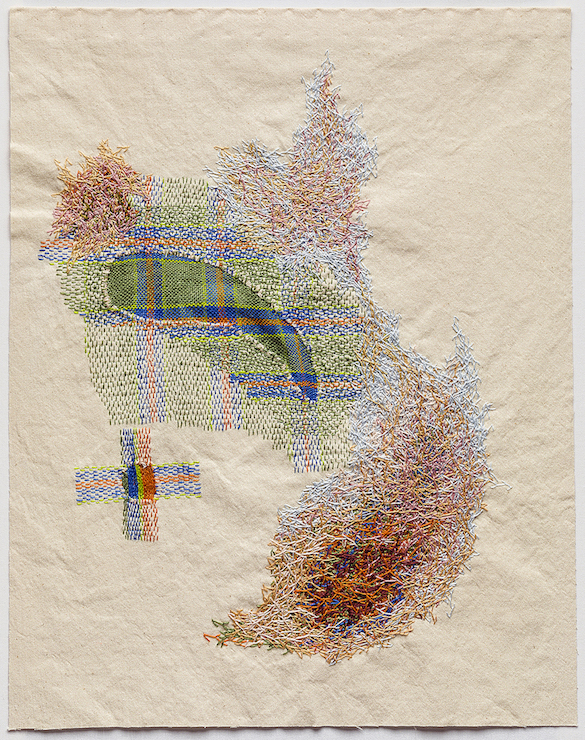