In her recent talk at the College for Creative Studies, Mexican artist Marela Zacarias explained her shift from figurative mural painting to abstract sculpture.  While painting a scarf on a female figure in a commissioned mural, she realized she was much more interested in the abstracted folds and arabesque shapes of the scarf, and its relationship to the history of textiles and women, than in the figure she was painting. Up until then, Zacarias had been painting mostly murals. She explained that the social and political climate when she went to college, particularly at Kenyon College where she was in art school, led her to the political activism of painting murals. Ultimately she combined the sculptural abstract form inspired by textiles, as well as architecture, to create what are essentially abstract sculptural wall reliefs or murals, and unlike a mural, enwrap an object rather than use it as a support. 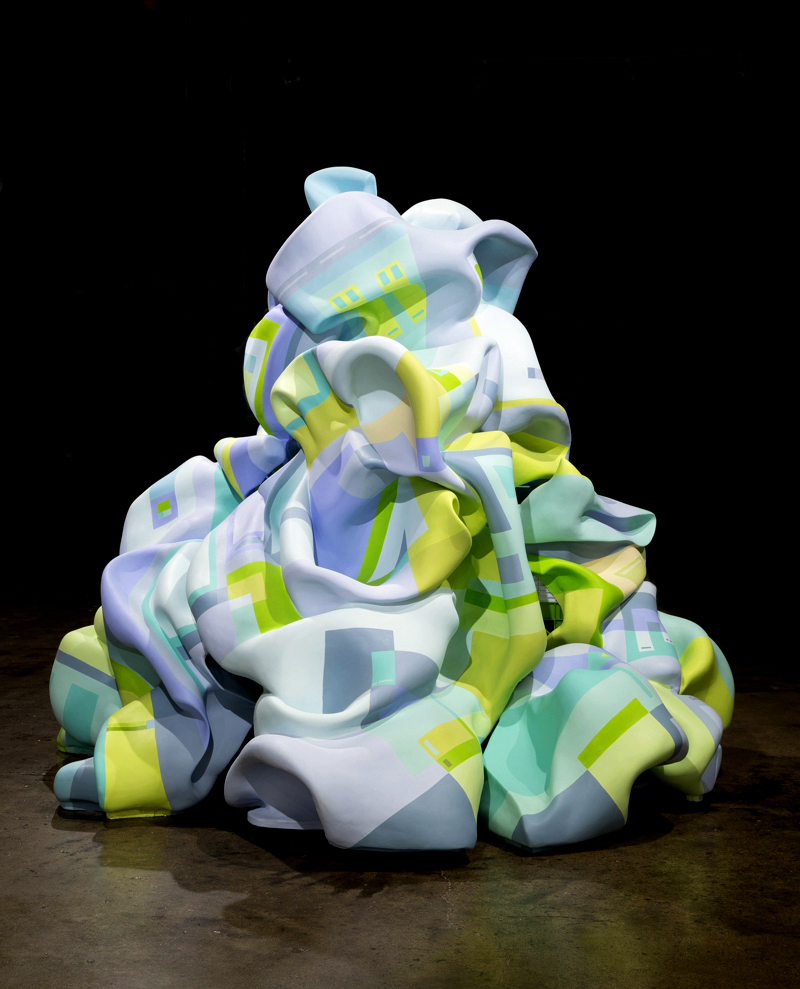 In keeping with her site-specific practice and her interest in Diego Rivera’s Industrial murals at the Detroit Institute of Arts, in creating “Coatlicue’s Return,” the title of her suite of sculpture/murals at Wasserman Projects, Zacarias researched Detroit’s material culture through its architecture, landscape and museum collections. She imbued her sculptures with objects and abstract painting that reference a few of Detroit’s monumental icons. Having grown up with and studied the Mexican Mural movement in Mexico she of course engaged with the Rivera’s Industry murals at the Detroit Institute of Arts. The center-piece then of “Coatlicue’s Return” is a large, free-standing undulating sculpture (enwrapping plastic milk crates, artefactual debris from Detroit life, and suggesting Coatlicue’s nurturing identity.) Composed of nine separate interlocking parts, symbolizing the myth of Coatlicue’s ultimate murder and dismemberment perhaps, they nest together like a puzzle. Referencing both the Aztec myth of the Coatlicue, the Earth/Mother goddess of both Creation and Destruction of Aztec culture, and Rivera’s painting of Coatlicue as an enormous anthropomorphized machine, that both creates (cars) and destroys (the worker). The abstract painting on the sculpture suggest Rivera’s decorative Aztec trim in his Detroit mural. 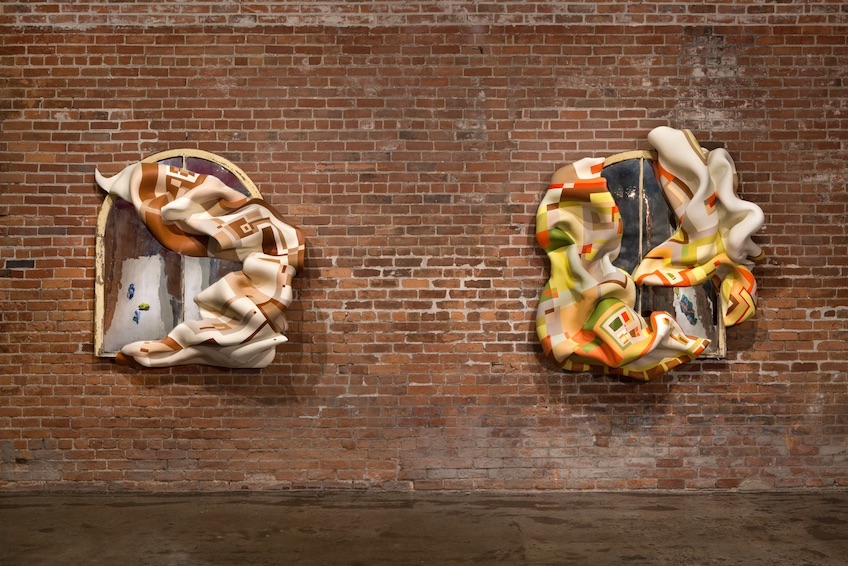 Composed of wood and screen armatures, manually coated with plaster, Zacarias’ sensuous forms take shape through an arduous sculpting and sanding process. Before being painted, they already have a lively, biomorphic presence reminiscent of French surrealist sculptor Jean Arp. Stretching the definition of mural painting, Zacarias, drapes her sensuous forms over architectural details such as locally found window frames and objects like hanging tire swings, recovered from Detroit neighborhoods. Like Mexican women’s use of rebozos, which are lengthy, multipurpose fringed, shawls, employed during child birth and for nurturing and carrying their babies, the draping sculptures suggest the long association of women and draping textiles and by association, the creation of the world. In a sense, all of Zacarias’ sculptures are images of giving birth or of creating the world.

Two sculptures inspired by Rivera’s murals, “South Wall” and “North Wall,” have a very immediate sense of playfulness and giving birth. Both windows, recovered from Detroit’s landscape, have mirrors wrapped in Coatlicue’s birthing textiles, that reflect the beholder, implying that, even now, Coatlicue is at work creating us, the viewers. Both are painted in the respective palette of Rivera’s walls. On her explorations of Detroit, Zacarias visited the Guardian building, the Art Deco office building totally based on Mayan design elements. Painted with the graphic design and colors of the Guardian Building, the wall relief “The Guardian,” suggests the notion of a textile metamorphosing into that space. 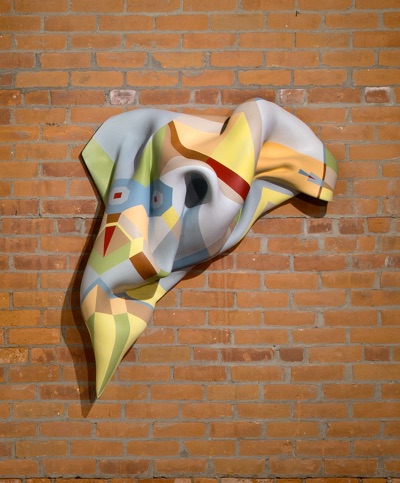 Bookending “Coatlicue’s Return” in the Wasserman Project galleries is New York artist Sarah Meyohas’ project, “Speculations,” which is, judging by her past artistic endeavors, driven by her engagement with the workings of the economy and the organization of the world’s trading and financial market. Once a student at the prestigious Wharton School of Business, her multimedia visual experiments are often beautiful, always slick, and uncertainly, critiques of the vagaries of time and money. “Speculations,” includes four tantalizing photographic images of mirror images reflecting mirror images of mirrors, and so on, into the darkness of infinity. Each photograph of the “Speculations” series is differentiated by an enticing decorative tableau, which is multiplied, and its attractiveness enhanced, by the mirrors. “Pink and Yellow Speculation,” 2015, reflects a coral colored wall into the darkness of infinity, the coral slowly darkening into black, into the unknown metaphorical future. Foregrounding the image is a branch of brilliant yellow flowers that tints the overall image and is magnified, and made even more enticing, by the repetition of the mirrors. Metaphorically, it could be a commentary on the aleatoric nature of financial speculation or specifically on the speculative and illusory nature of beauty and the art market. “Flaunt Speculation, 2018, is the same arrangement of mirrors but surrounded by, presumably, Meyohas own nude body enhanced, comically, by sprays of purple flowers. Most interesting is that in each of the “Speculation” series there is a slight offset to the mirrors, like a winding snake, which in the calculus of the interpolation, in following the arc of mirrors, would come back and bite the ass of the beholder. 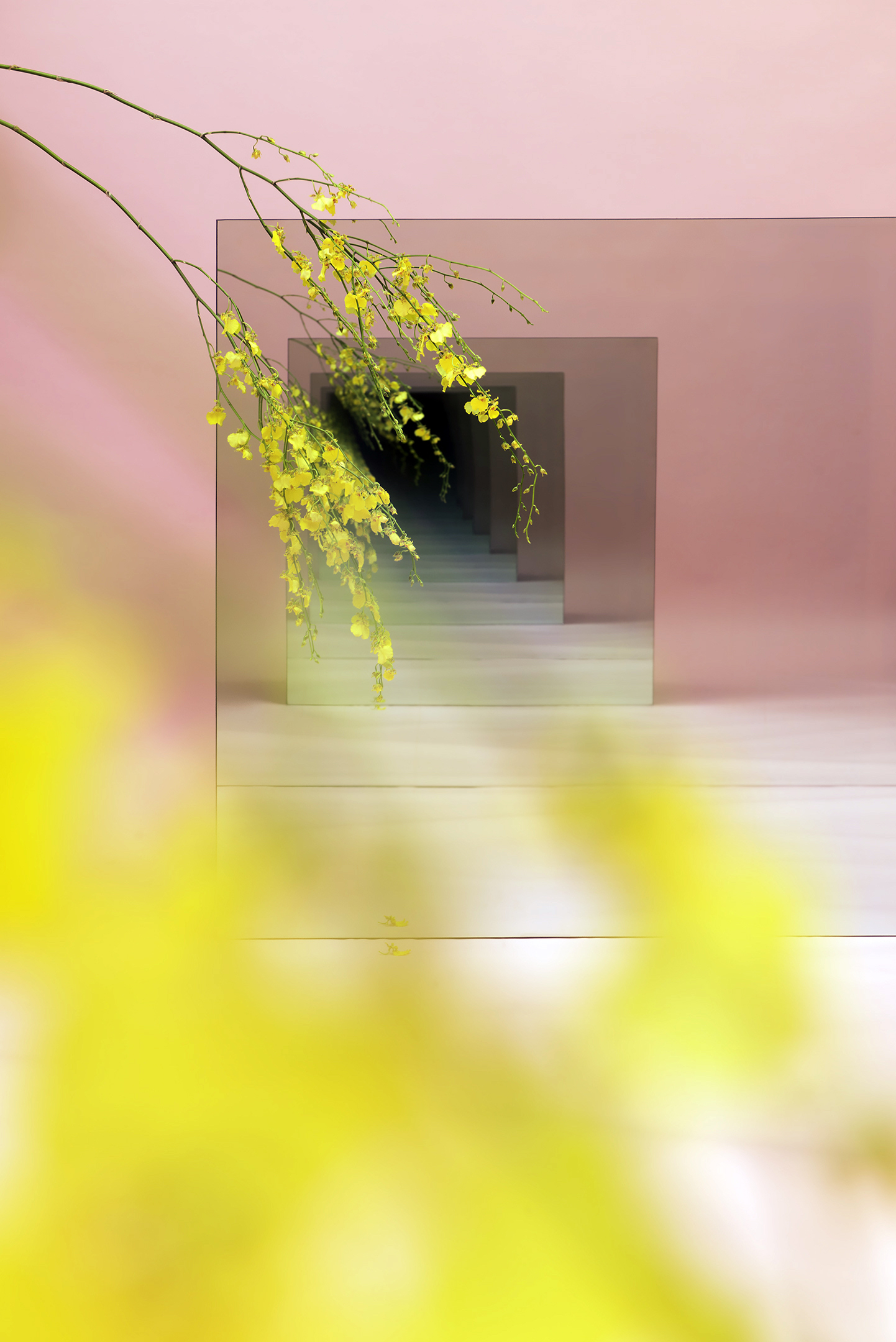 The piece de resistance of the whole exhibition is “Generated Petals Interpolation,” Meyohas’ video installation that employs an engaging room of mirrors and a mesmerizing, computer generated program of an evolving, ever changing grid of rose petals. Meyohas hired a pool of temp workers to pick through thousands of roses, picking the most “beautiful” from each bouquet and photographing a single petal from it. Those photographs were digitally entered into a computer and an algorithm created to select and create an infinite number and variety of petals that are projected onto the wall. The mirrored environment, like the fitting room at Nordstrom’s, reflects a room full of infinity and titillating, pulsating images of rose petals. Like the infinity of repeating images in the “Speculations” series, it suggests and tests the technological generation and replication of beauty and its economy of labor and production.

While both Zacarias and Meyohas engage in a spectacular use of materials and technology there is an equal engagement with ideas formed with a kind of visual literacy (both live in and develop visual ideas) that suggests many compelling contemporary issues. Especially interesting is the engagement that each artist has with time. Meyohas’ images confront the nature of beauty through manipulated technology. In “Speculations” and “Generated Petals Interpolation,” the repetition of the imagery, creates its own seductive beauty in a warp of a circuitous infinity. Time becomes a dizzying and perplexing existential quandary. Zacharias employs a convincing and at once beautiful and frightening Aztec myth to explain the cosmic and local creation of everything.