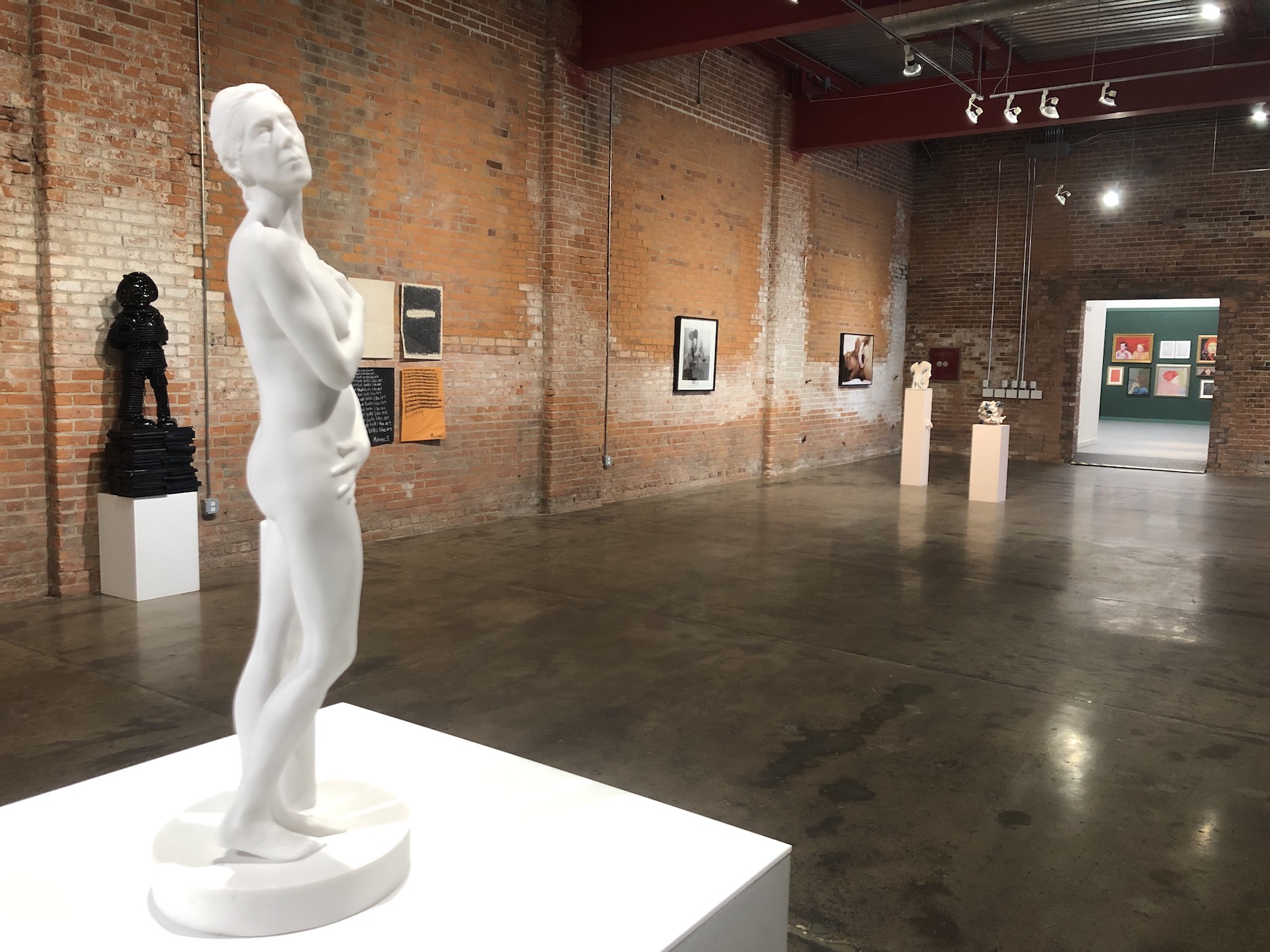 The Wasserman Projects gallery opened a multi-faceted set of exhibitions on January 25, 2019 that is eclectically diverse. The work is divided into a solo show by Esther Shalev-Gerz, an exhibition that premiered at the Swedish History Museum, a group show, Portray, that includes fourteen artists from a variety of geographical locations that draws on previous artists represented by the gallery and includes new artists from Detroit, New York City and beyond.  In addition, there is a retrospective by the American-Israeli artist Felice Pazner Malkin, introduced up front and continues in the rear gallery with representational works of art.  The exhibition also leverages the space at Wasserman which has more square footage than any major gallery in the Detroit Metro area, providing the viewer with a feeling that elevates the work to a near museum-like ambiance.

“Part of Wasserman Projects’ mission is to provide a platform for artists to show their work and to connect with the creative community in Detroit. For our upcoming season, we have the opportunity to present several artists with whom we’ve previously collaborated, like Esther Shalev-Gerz, Ken Aptekar, and Matthew Hansel, among others, creating a continuity of experience and support,” said Alison Wong, Director of Wasserman Projects. “And at the same time, we are excited to introduce new artists to our community to further enrich and explore timely and topical dialogues within contemporary practice” 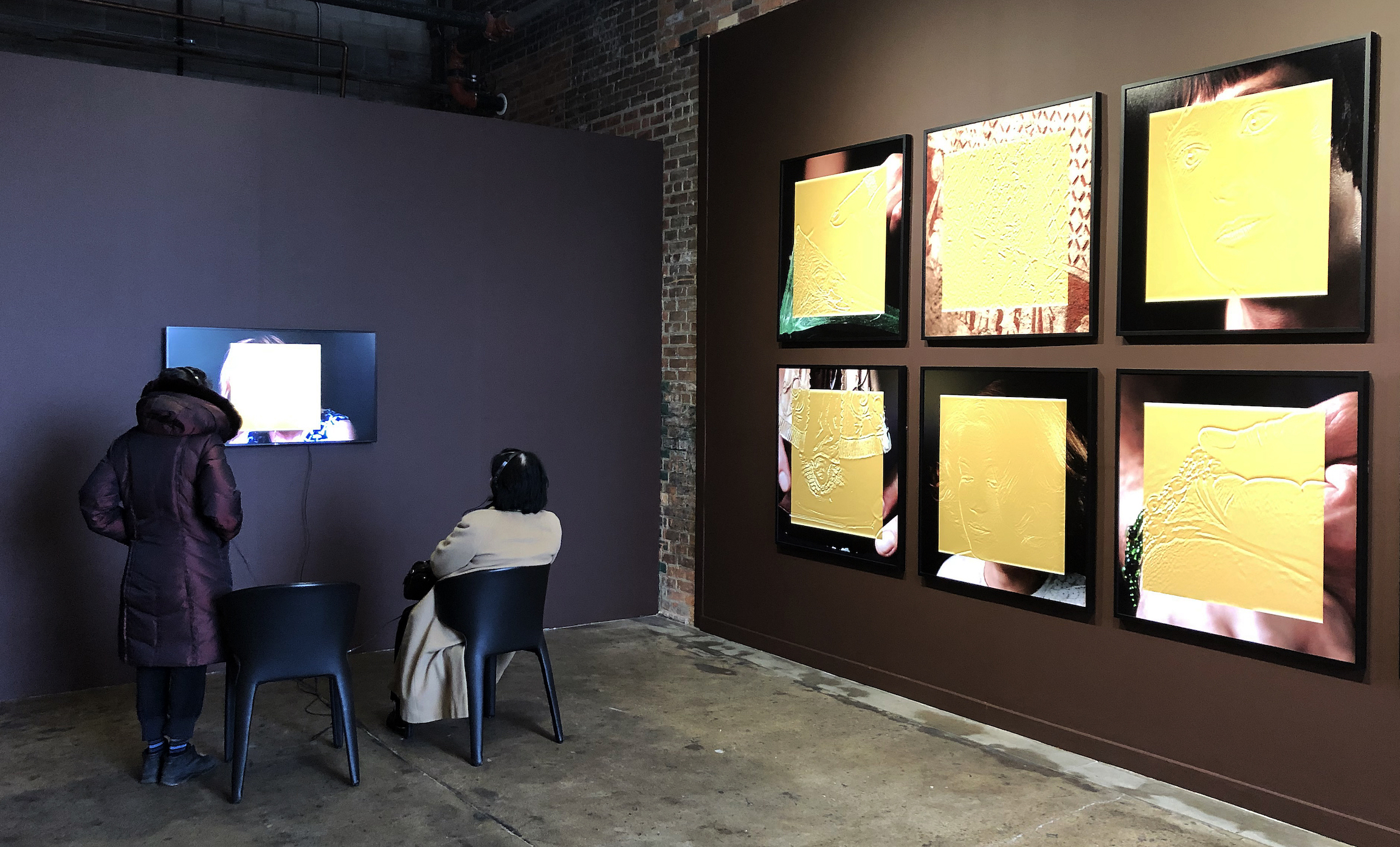 The Esther Shalev-Gerz selections from The Gold Room, are unique in that the artist invited five  individuals who recently found refuge in Sweden to speak to the personal importance of an object they brought with them when they migrated. The exhibition requires the viewer to slow down and understand the process where a golden square floats over the center of the screen.  The work is a combination of photo portraits and a video installation, and which depict some of the featured participants and objects with their faces obscured by a golden panel. 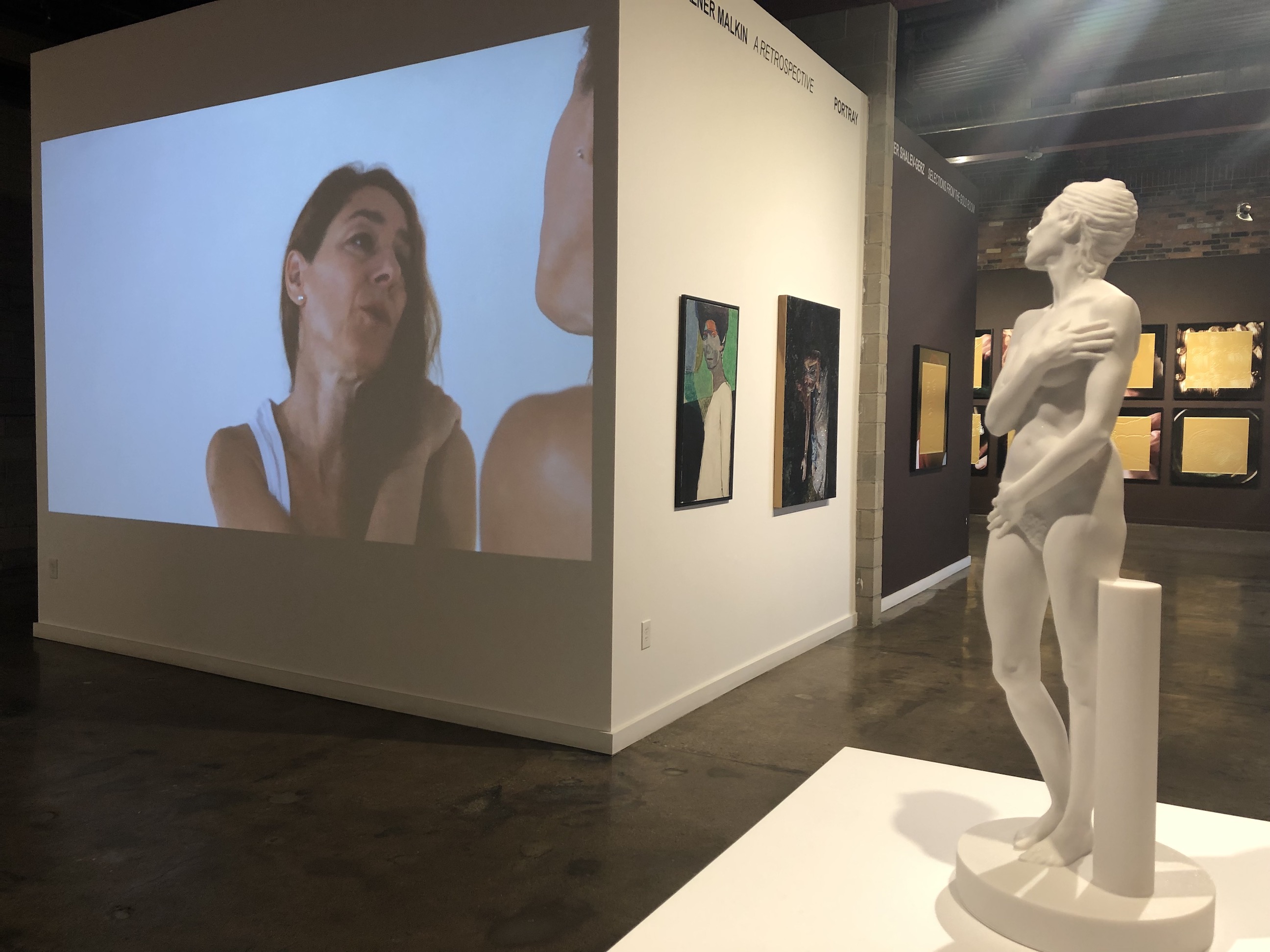 As you move into the large open space and start to take in the Portray exhibition, it is hard not to notice the marble sculpture Aging Venus, where  Susan Silas photographed herself over the course of a decade and created a 3D scan of her changing body, which served as the basis for the sculpture.  She says, “As a child, my bedroom was covered with reproductions of Botticelli’s Birth of Venus, torn from an art book in my parents’ library. It seems to me that at an early age, two of the core values that would inform me throughout my life and career had already established themselves—a love of beauty and love for the female heroine at the center of meaning. Later there were ample quotations from writings and rock and roll lyrics added to the walls. For me, image-making and writing remain intertwined.”

I have not experienced such a pristine marble full-figured self-portrait juxtaposed to a large screen video where the artist sings 1960 TV theme songs into a mirror, creating a double image of herself.  These theme songs include “Happy Trails” from the Roy Rogers Show, and other themes from The Mickey Mouse Club, Star Trek, Superman, Yogi Bear, and Bat Masterson, to name a few.  It does occur to me how that might be perceived based on one’s childhood experience and how that carries an emotional nostalgia for those of a certain age. As in our experience with all art, we bring our own individual experience to the moment.

Susan Silas titles the sculpture A Study for Aging Venus, and in reading her history of this work, one finds out just how much technology was used in its creation and her plans for a larger sculpture.

She says, “The body scan for Aging Venus has generated a set of 2D photographic studies and a set of photographic portraits, created by shooting stills within the 3D space. The object file was used to create a 3D model that stands 11 inches tall which will become an edition. The large-scale sculpture will be cut by a high performance robotized 3D scanner that cuts stone with laser technology. The stone will be Carrara marble chosen from a quarry in Italy and the carving will be done in Italy as well. After the cutting is complete, a traditionally trained sculptor will help me finish and polish the marble. The sculpture will stand roughly seven feet tall from head to foot.”

Susan Silas is a Hungarian-American national living and working in Brooklyn, NY.  She earned her MFA at the California Institute of the Arts.

Continuing with the female figure is the work of Bruno Walpoth, where the artist carves life-sized human figures from blocks of wood and finishes the sculptures with acrylic paint. He repeatedly covers and sands down the surfaces to mask evidence of the wood grain and achieve a translucent, skin-like appearance. The Italian sculptor is the son and grandson of wood-carvers, who grew up in a town known for its centuries-old carving tradition. He traces his inspiration even further back, to the deeply human portraits of early Renaissance painter Piero della Francesca. Within the context of figurative sculpture, it’s interesting and refreshing to see an artist reach back and create something so totally new, a metaphor for all visual art being made today. 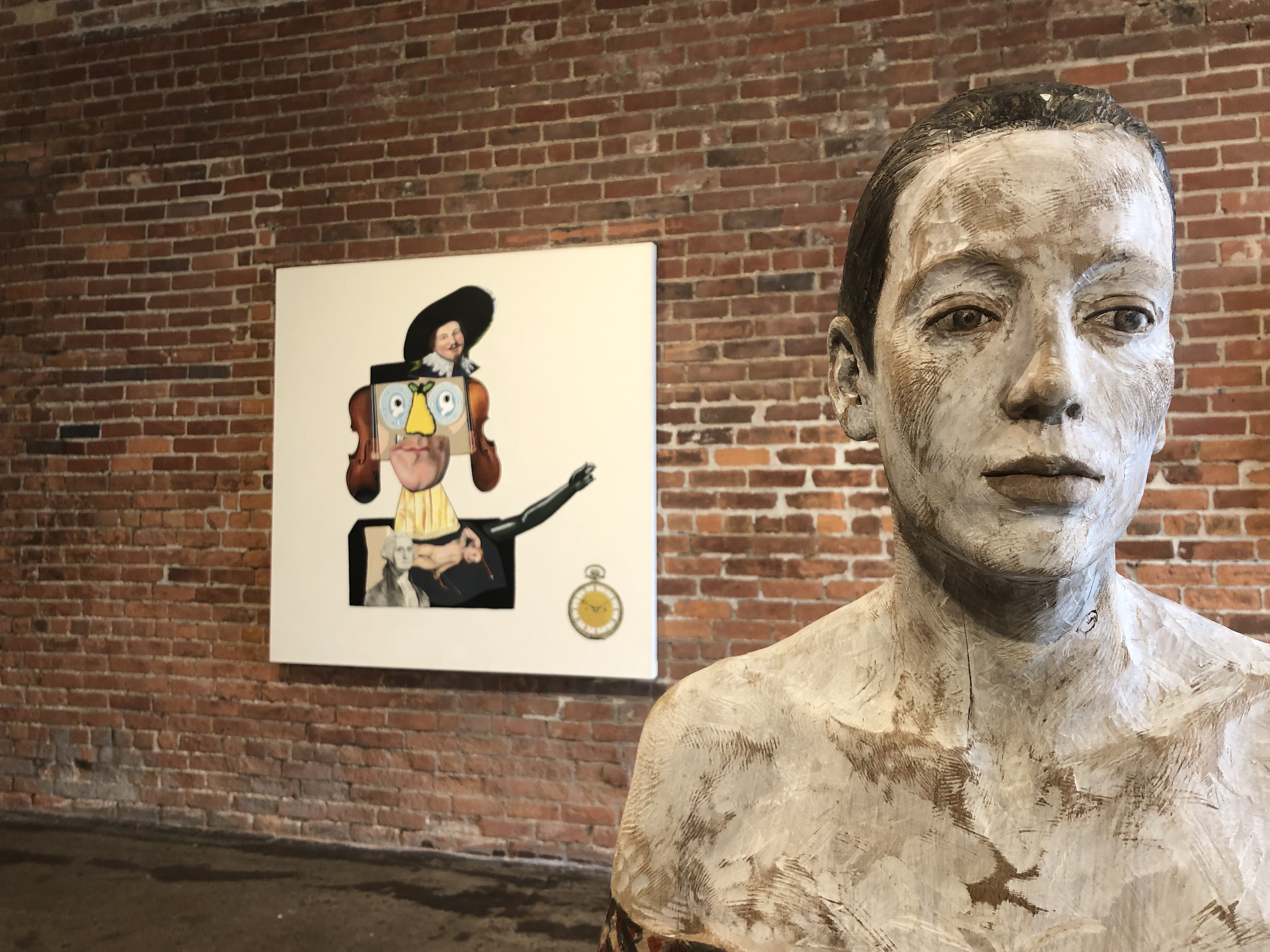 In the background and nearby is the work of Adnan Charara, a Lebanese-American artist from Dearborn, Michigan who has lived and worked in the U.S. since 1982. His collage-like oil painting, Masquerade , assembles classical imagery that strikes a compositional balance using shape, line and color that draws the viewer into his imaginary figure. Adnan bought the historic Astro building in midtown in 2011 and developed it into a multifunctional space, including the Gallerie Camille, gift shop, two store-fronts and his sprawling subdivided studio.In his statement he says, “In general, my art should be viewed as a visual representation of the human condition. The realization of my thoughts and emotions through the creation of my art is a way for me to express my inner self. In turn, I understand that my inner self is merely a particular manifestation of the human condition that connects everybody, and so it may be said that by expressing my inner self and revealing personal truths, I am attempting to reveal truths about us all.” 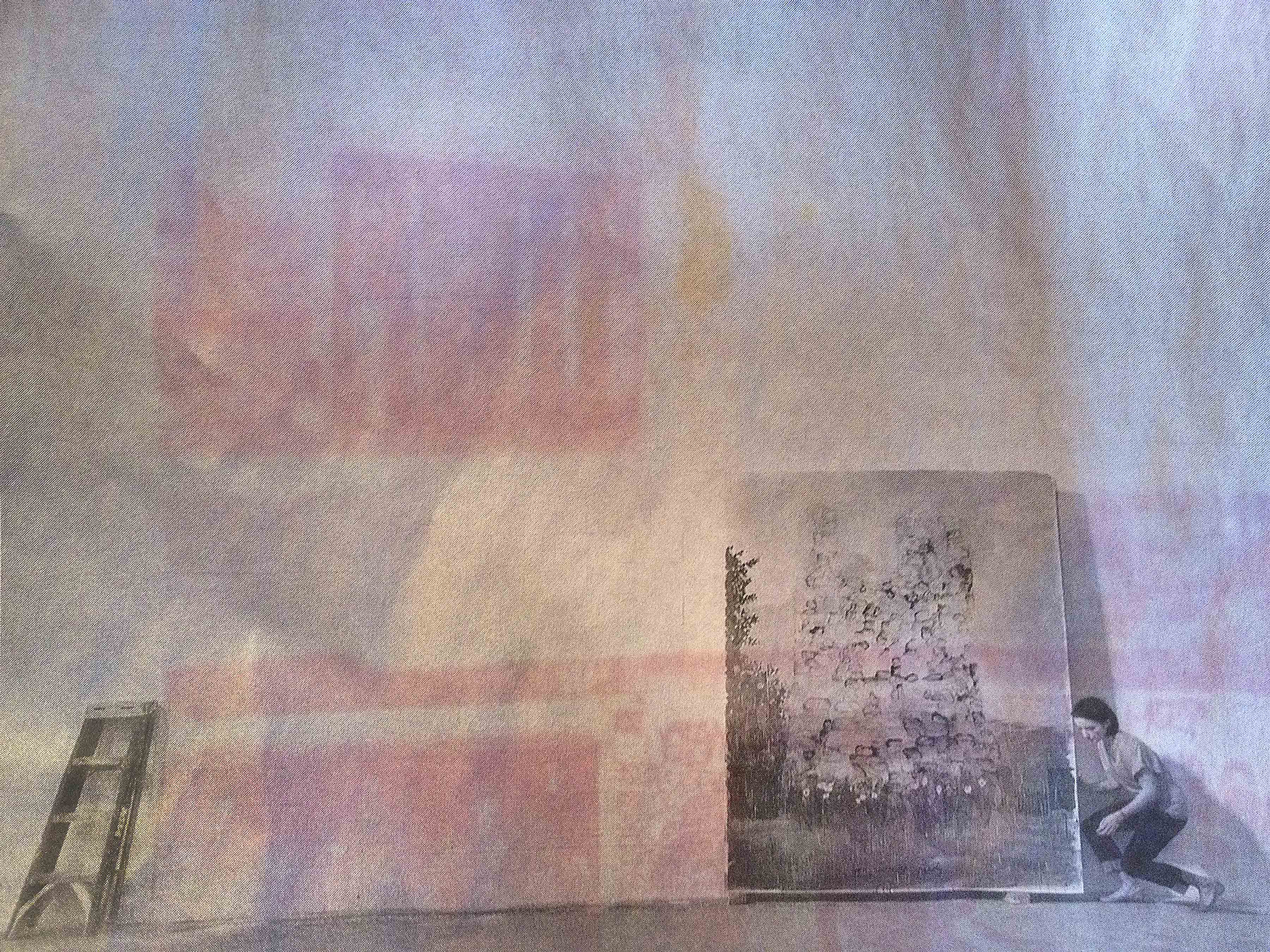 I was drawn to the photographic image by local photographer Donald Dietz, because it seems to transcend the bulk of conventional photographic work in a multitude of ways.  The translucent field of color seems to seep through the backdrop of this kneeling figure and the painting. The composition is based on this large space with objects that feel like drawings as bookends at the very bottom of the frame. It’s as if Dietz is holding up two images like a sandwich and creating a third image.  He says in his statement, “I love finding something that I think would make an interesting photograph and then doing what needs to be done to translate what I saw into the image I imagined it could be. I hope my work leads people to look at things they see every day, and take for granted, in new ways.” 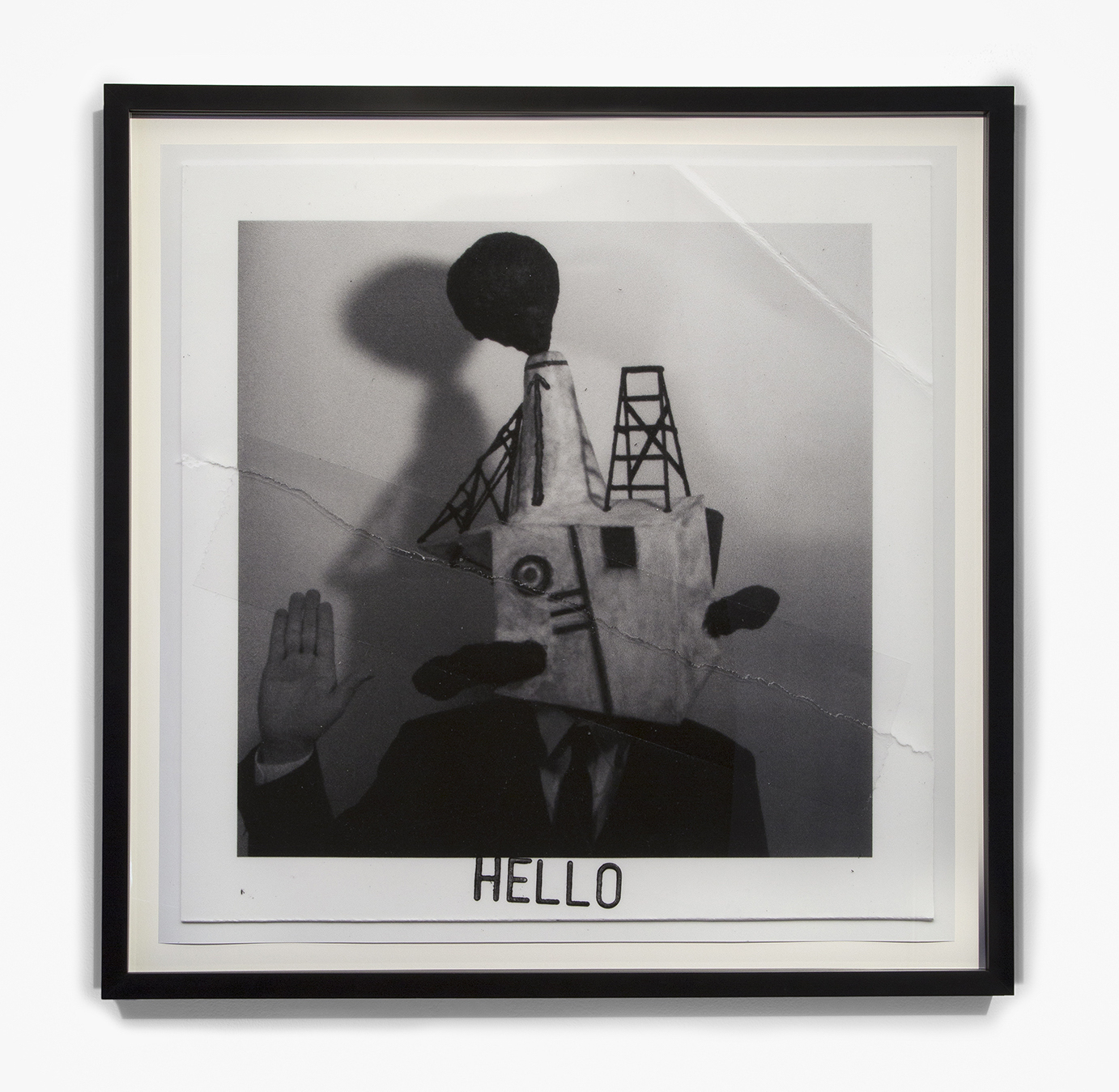 Other than some prints at the Simone DeSousa gallery, a recent exhibition at Wayne State University ( THIS MUST NOT BE THE PLACE YOU THOUGHT IT WOULD BE) was my introduction to the artist Ryan Standfest with a graphic arts approach to an Americanized Constructivist sensibility that seemed dominated by his Rotland MFG. Company motifs post World War I. These formal industrial constructions of paint, ink, and enamel on cardboard reminded me of the Russian Constructivism that rejected the idea of autonomous art. This photograph, Factory Head 1, came from that exhibition and is better explained in that review. For the Detroit Art Review, Glen Mannisto writes, “The diversity of Standfest’s art stretches to performance theater and is represented by an installation of three “masks,” called “Factory Heads,” that he employed in a performance at MOCAD with an accompanying musical composition of factory noise created by Chris Butterfield and Mike Williams. In a sense Standfest’s “Factory Heads” sculptures and performance, covers of Bolshevik agitprop theater, are again in the Russian Constructivist spirit modeled after machine-like factory architecture with smokestacks and are accompanied by a Standfest poem that delineates the abject evolution of the working class.”  He says in his statement, “My enthusiasm for obsolete print ephemera such as comic strips, tabloid newspapers, postcards, catalogs, manuals and advertisements, is intended to highlight the fugitive value of authoritative cultural currency as it advertises our vision of the ideal.”

Wasserman Projects was conceived by Michigan-native Gary Wasserman and opened its doors in a former firehouse in Detroit’s historic Eastern Market, one of the oldest and largest year-round markets in the U.S., in fall 2015. Wasserman Projects is guided by a spirit of collaboration, recognizing that artist projects are best realized and most meaningful when they engage a broad range of cultural organizers, community leaders, and the dynamic and diverse populations of Detroit. The organization works with artists from across disciplines and around the world, presenting exhibitions and performances that will spark a discourse on art, but also cultural, social, or political issues, which are particularly active and timely in Detroit.