There’s a lot to look at and to like in Reflecting Pool, on view until February 22 at Wasserman Projects.  A roster of seven artists, some well-known in Detroit–and some not-so-much–offer up objects and pictures featuring the gallery’s typical conceptual rigor leavened with some welcome visual pleasures.

Esther Shalev-Gerz occupies the far end of the gallery and seems like an old friend returning to the site of her ambitious 2016 installation Space Between Time.  The three archival pigment prints from that show are part of her series The Open Page, a project she executed in collaboration with the Toronto Public Library. They show the disembodied hands and forearms of librarians holding their favorite rare books, and stand up quite well as individual artworks independent of the elaborate intellectual super-structure of her larger works. 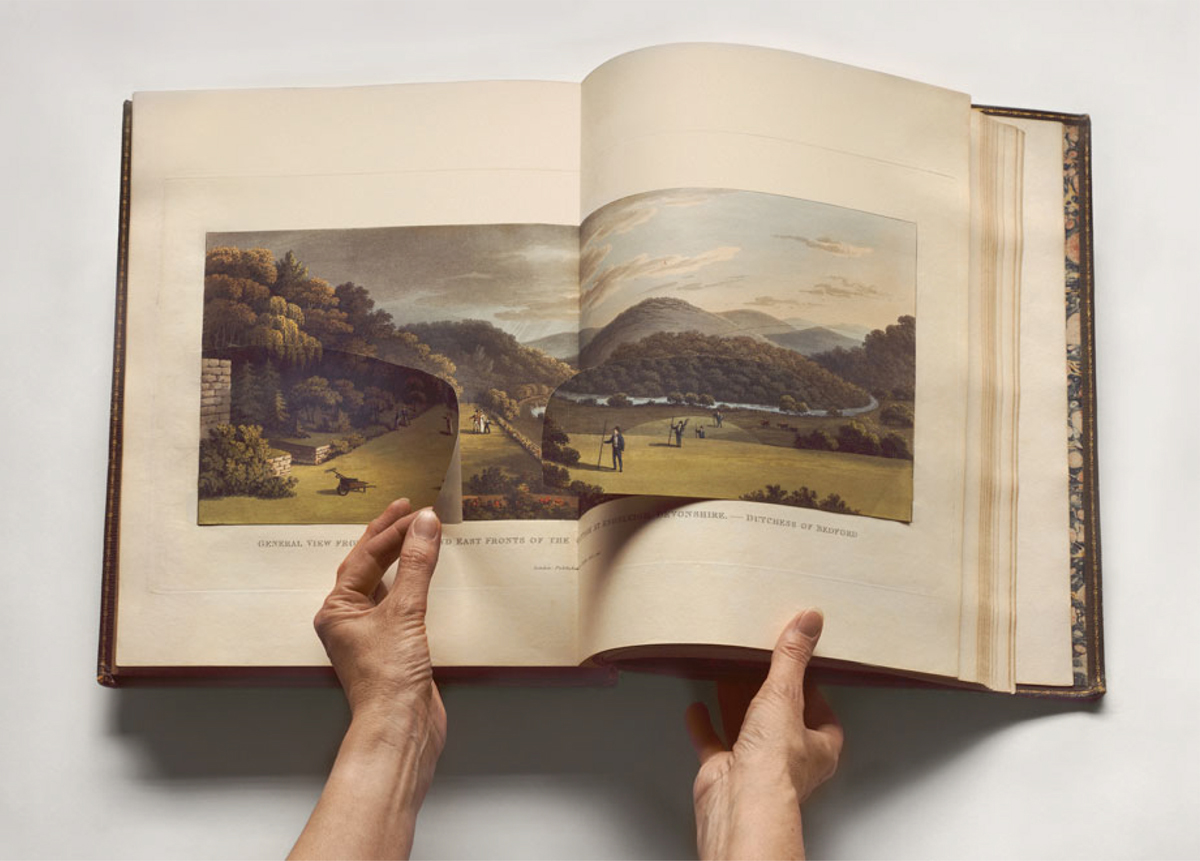 Adjacent to the photographs by Shalev-Gertz, Graem Whyte’s eccentric objects feature his characteristic up cycling and transformation of the substance to the city in the service of his own unconventional vision. In Reflecting Pool, he recycles not only found objects but elements of art history. His Expansion looks like the offspring of a loving relationship between Brancusi and Giacometti, and as part of the same ad hoc installation, a cast aluminum mirror-with-eyeholes entitled The Other Side channels a surrealist-derived object of no known origin. In the same grouping, a cast bronze rubber chicken holds within itself a geode, both a visual joke and a beautiful absurdity. 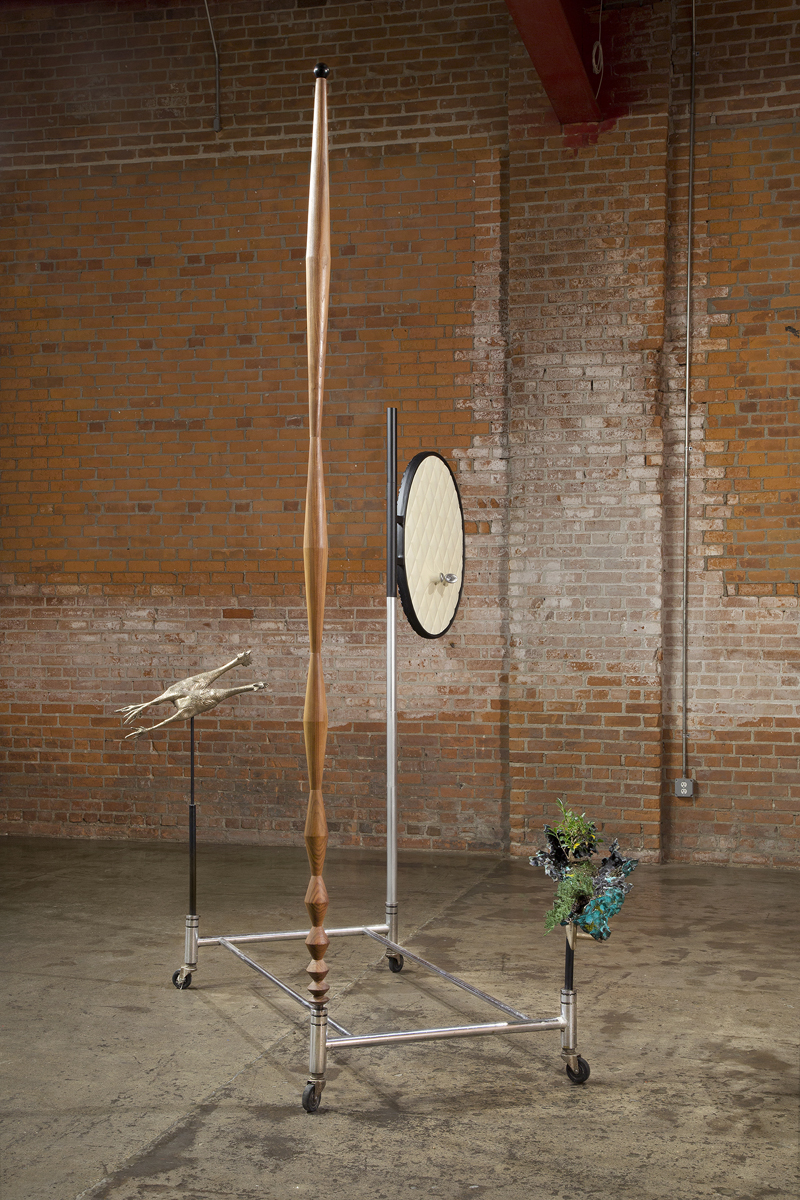 Painter Jacob Feige’s work takes up a lot of space, literally and figuratively in Reflecting Pool. Two small paintings, five free-standing, two-sided pictures and a large diptych reveal him to be an agnostic who wants to believe in painting. He makes his clearest argument in Iconostasis I and II. (The iconostasis is a screen of icons separating the nave from the sanctuary in a church, the common from the transcendent, the everyday from the extraordinary.)  Feige paints and repeats a variety of images on these two large panels –byzantine draperies, ovoid onion-like forms–and onions–traditional icon-style hands and eyes. There is even what looks like a re-cycled painting of a modern mother and child, cut up and applied piecemeal. Thick slabs of paint, split and attached to the surface of the multi-paneled artwork, allow a glimpse of the illusive space behind the picture plane, where miracles are possible.

Matthew Hansel’s technically accomplished compositions mine varying historical styles of painting in a kind of pastiche that sometimes tries too hard to impress and not hard enough to connect (though it might appeal to a viewer with a puzzle-solving mind and an interest in the history of art.) However,  Let There Not Be a Heart as Mine and Show me the Way to Go Home  reveal what can happen when the artist gets out of the way of his own virtuosity.  The latter, in particular, is a revelation, and well worth a trip to Wasserman Projects on its own merits.  Multiple renderings of diminutive china reproductions of Jacques-Louis David’s grandiose Napoleon Crossing the Alps fly across the canvas, propelled by unseen gales. The contrast between the trivial porcelain figures against the sinister grandeur of the stormy seascape aptly puts humanity in its place. 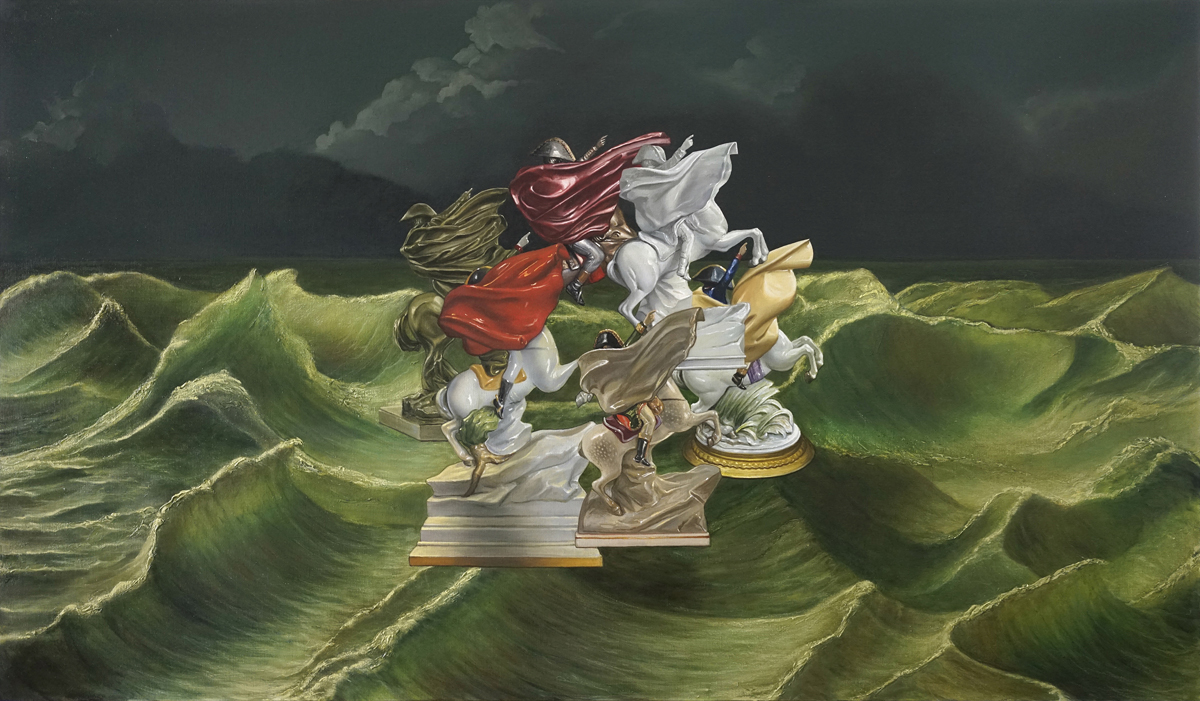 Jason DeMarte knows that we are conditioned to accept photographs as “real” and he has engaged in an elaborate ruse to use our unwary acceptance to subvert those expectations in the service of a larger vision. He painstakingly collages together individual images–birds, flowers, vegetation–into plausible idyllic natural scenes; we only gradually become aware of interpolated human-made elements. Each  landscape hides a narrative of man-made intervention in plain sight. They are deep fakes in the service of deep truth: that the untouched natural world is irrevocably lost.  In this Anthropocene age the only question remaining  is how we will manage the interaction of nature with human technology. 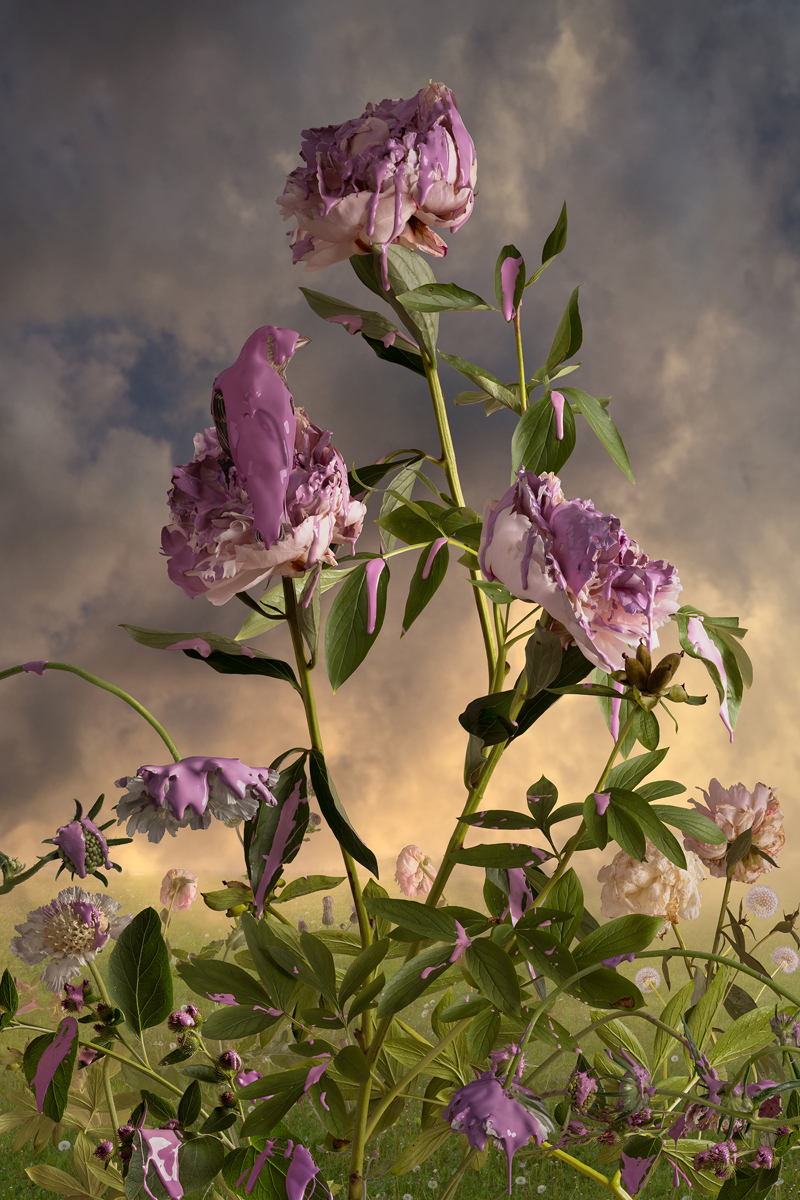 Twenty-six ceramic masks by Efe Bes, an artist best known for his performance on African drums, and four found object collages cast in resin by Virginia Rose Torrence round out the installation. 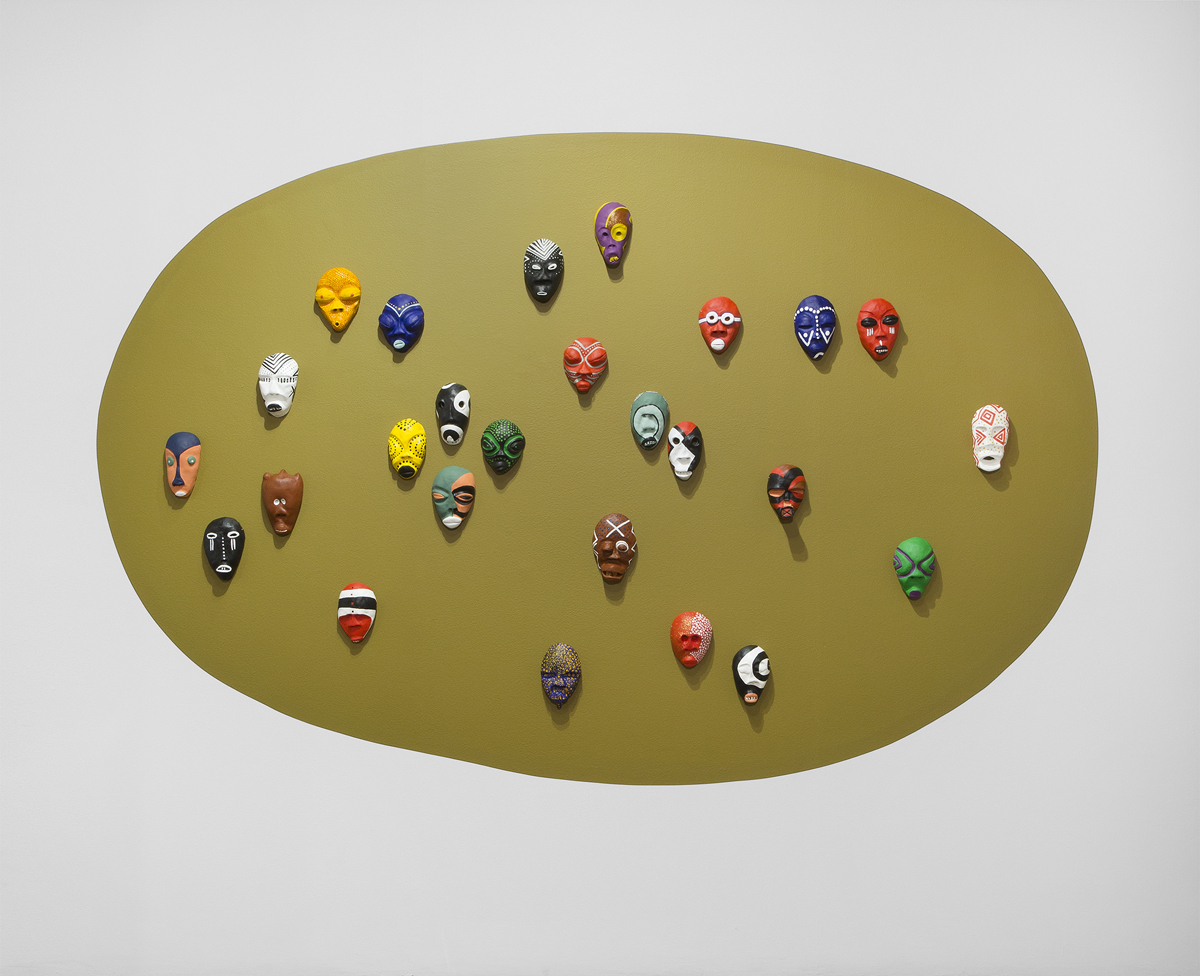 Reflecting Pool, in its totality, contemplates nature and art history, the power of images, the pleasures and perils of technology. The classical and traditional techniques and themes employed by the artists are reflected through a contemporary lens, literally and metaphorically mirroring aspects of the past while serving as a window to the future. 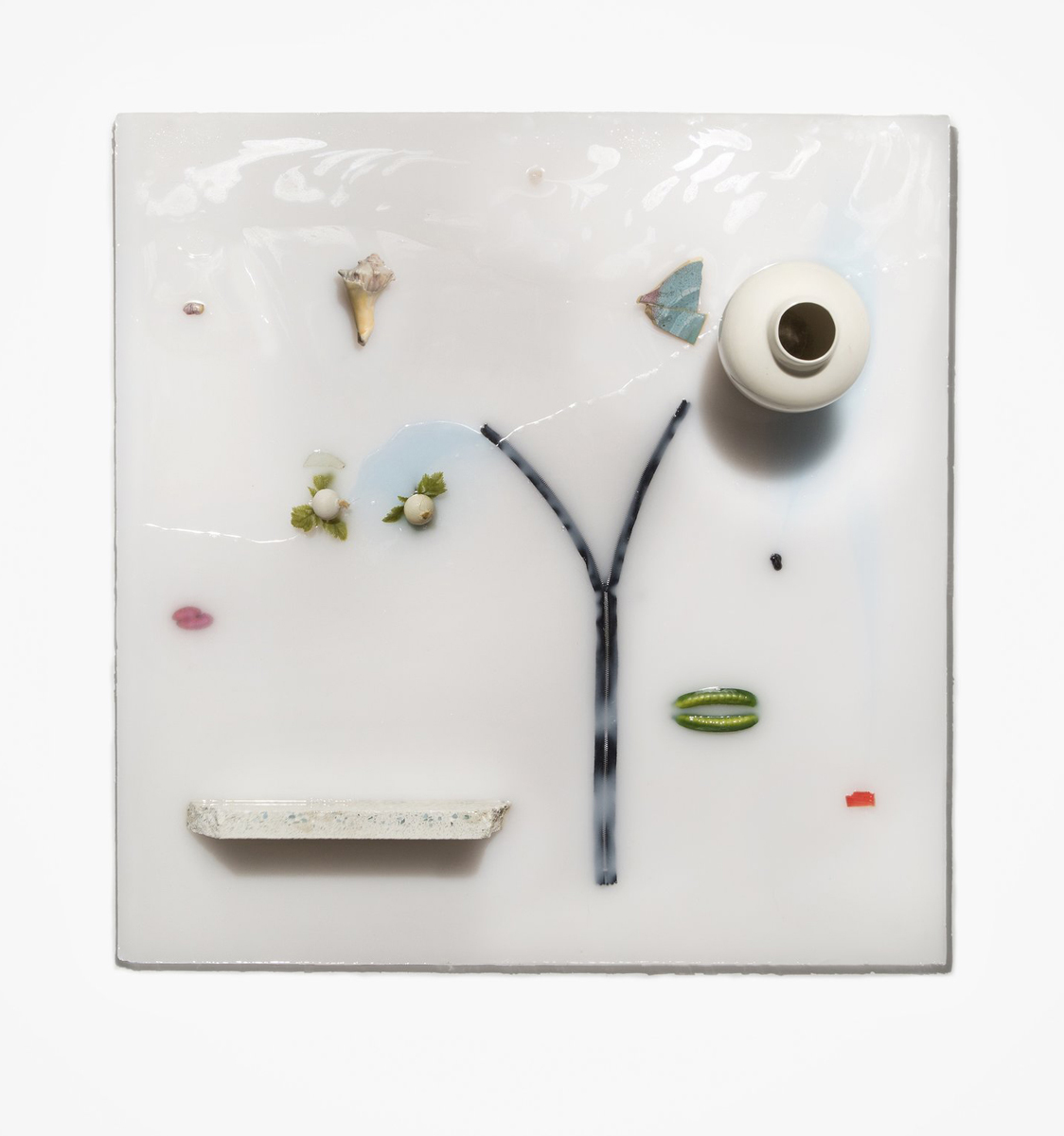