Installation of Michael Luchs On the Fly, new paintings, All images Courtesy of Simone DeSousa Gallery

We live in interesting times. The corona virus pandemic not only dictates whether we go out to eat or meet friends, it also dictates when we will again be able to see artworks in person. On the Fly, a solo show of new paintings by Michael Luchs, will be at Simone DeSousa Gallery until July 30, but the gallery is temporarily closed. One hopes that the space will re-open before that date. Once the world is up and running again, this exhibit should be on everyone’s list of Detroit’s must-see art events. In the meantime, here’s a brief overview of the work, with images, and some thoughts about viewing–and reviewing–online shows during the current stay-at-home regime.

Michael Luchs, art shaman, painter of signs and symbols and prominent member of the Cass Corridor Movement from the 1960’s and 70’s, remains relevant to Detroit’s contemporary art scene into his 80’s, with a new collection of 19 archetypal paintings  that repeat, amplify and refine his preoccupation with mapping the relationship between the material and the spiritual.

The artist’s famous reluctance to talk about his work appears to extend to attaching titles to his images. Every piece in the show is listed as Untitled, with bald sub-headings in parentheses referencing the totemic creatures in each of the paintings–squirrels and guns, rabbit, bird head and fish.  Dates are given (most of the work is recent, from 2019-2020) but the order in which the paintings were produced is not. He might be proclaiming the status of these artworks as platonic forms that exist in the now, outside of time, enduring and immutable.  Or maybe he just resents the prosaic art world requirement that words must be attached to images, interfering with their metaphysical aura.

The paintings in On the Fly are relatively moderate in size, yet manage to convey monumentality with their oversize renderings of the prey animals that populate Luchs’s symbolic world. The artist’s relationship with the ground that he paints on is fraught–he seems determined to aggressively interact with the paper, canvas or panel, stretching, folding, piercing, scratching. With his extensive visual vocabulary of marks and brush strokes, he builds up a tremulous matrix that expresses the essence of the singular totemic animal in each painting. 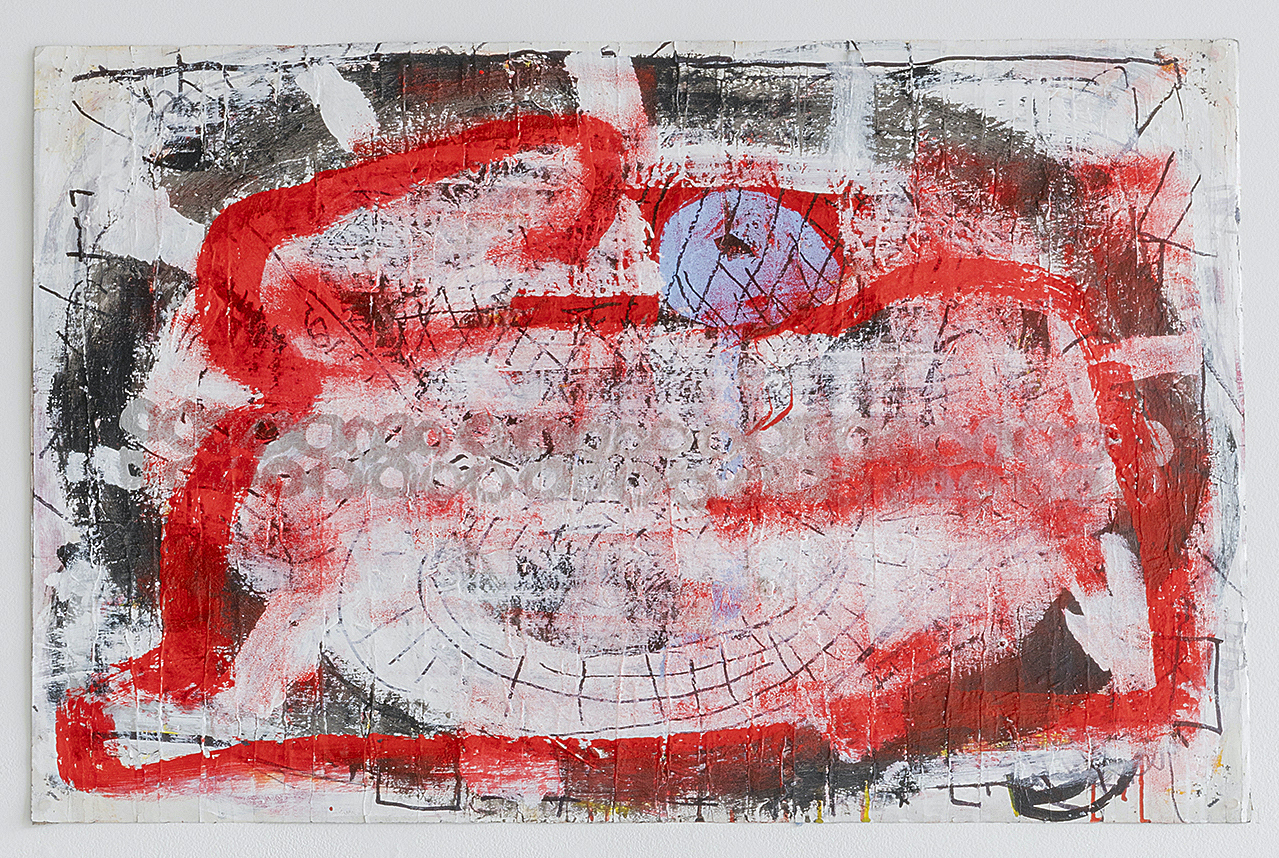 The rabbit appears most often in Luchs’s paintings–there are nine in On the Fly. Lyrical isn’t a term usually applied to his work, but the three sphinx -like acrylic rabbit paintings on paper, stacked one over the other on the gallery’s wall, qualify.  Joyful and exuberant, the red, aqua and yellow palette oscillates satisfyingly with the white of the paper. Bold black brush strokes and jittery marks punctuate and leaven the sweetness of the colors. This is intuitive painting at its best. 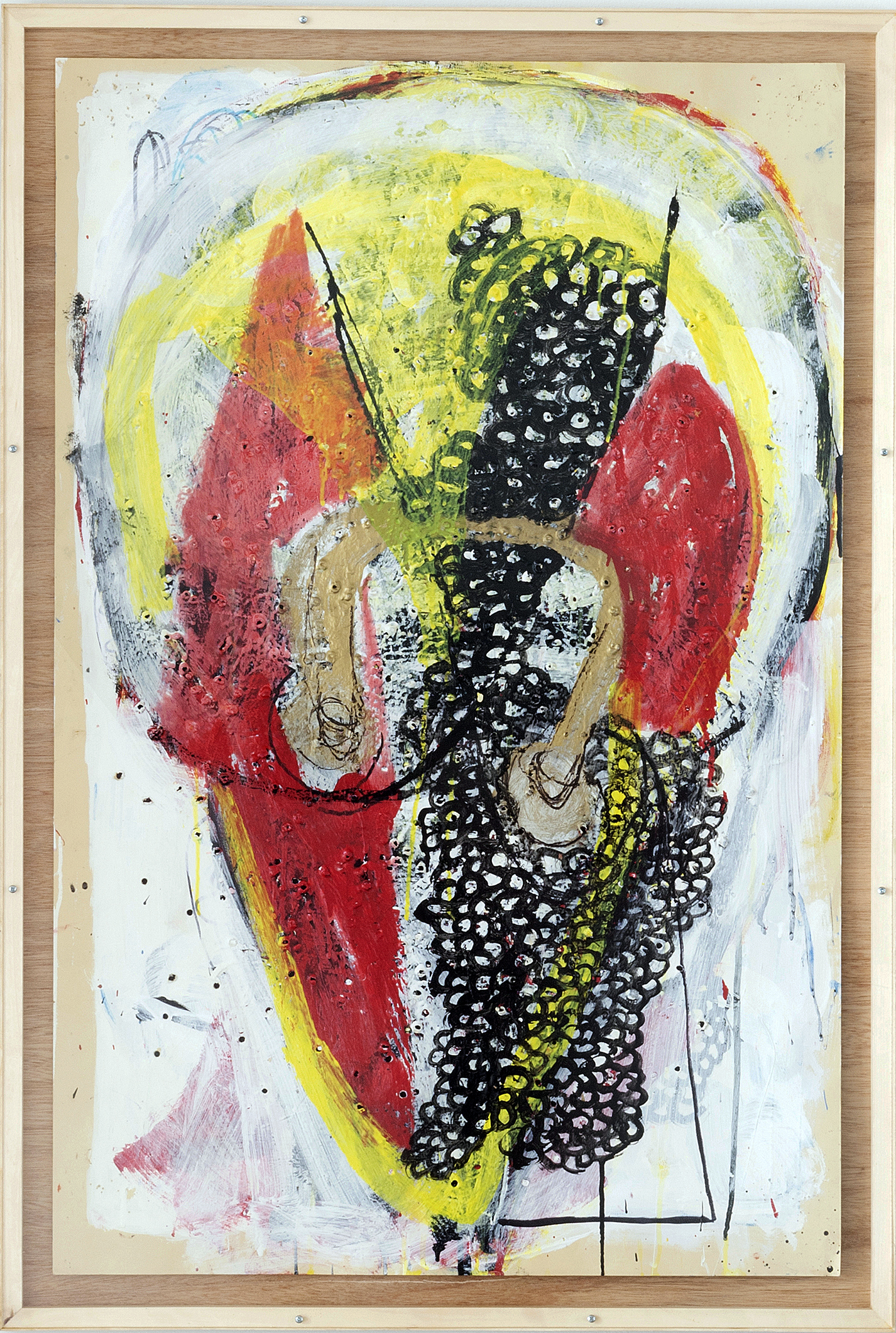 Five other rabbit paintings evoke a more ominous mood. Most are aggressively punctured, and their predominantly red color is less vibrant than anxious. Rays of energy or light or some other mysterious life force extend from some of the images, and in a couple of them, a faint intimation of the fish from another set of paintings seems to have slipped into the composition.  From anxiety we progress to full foreboding in the series of three confrontational birds’ heads. These perforated shapes want very badly to be icons, their round skulls reminiscent of halos. They awkwardly inhabit the picture plane with troubling voids in the lower right and left corners of the compositions.

Luchs’s paintings of fish, (and his two older paintings of squirrels and guns) depend less on single fetishistic signs, and more on the subtle interaction of competing symbols.  In the case of the fish paintings, the circular marks referencing rudimentary clocks or wheels vie for dominance with the barely recognizable fish that swims, literally, around. The linear rings, sometimes accompanied by cryptic letters and numbers, propel energies suggesting the cyclical nature of time. 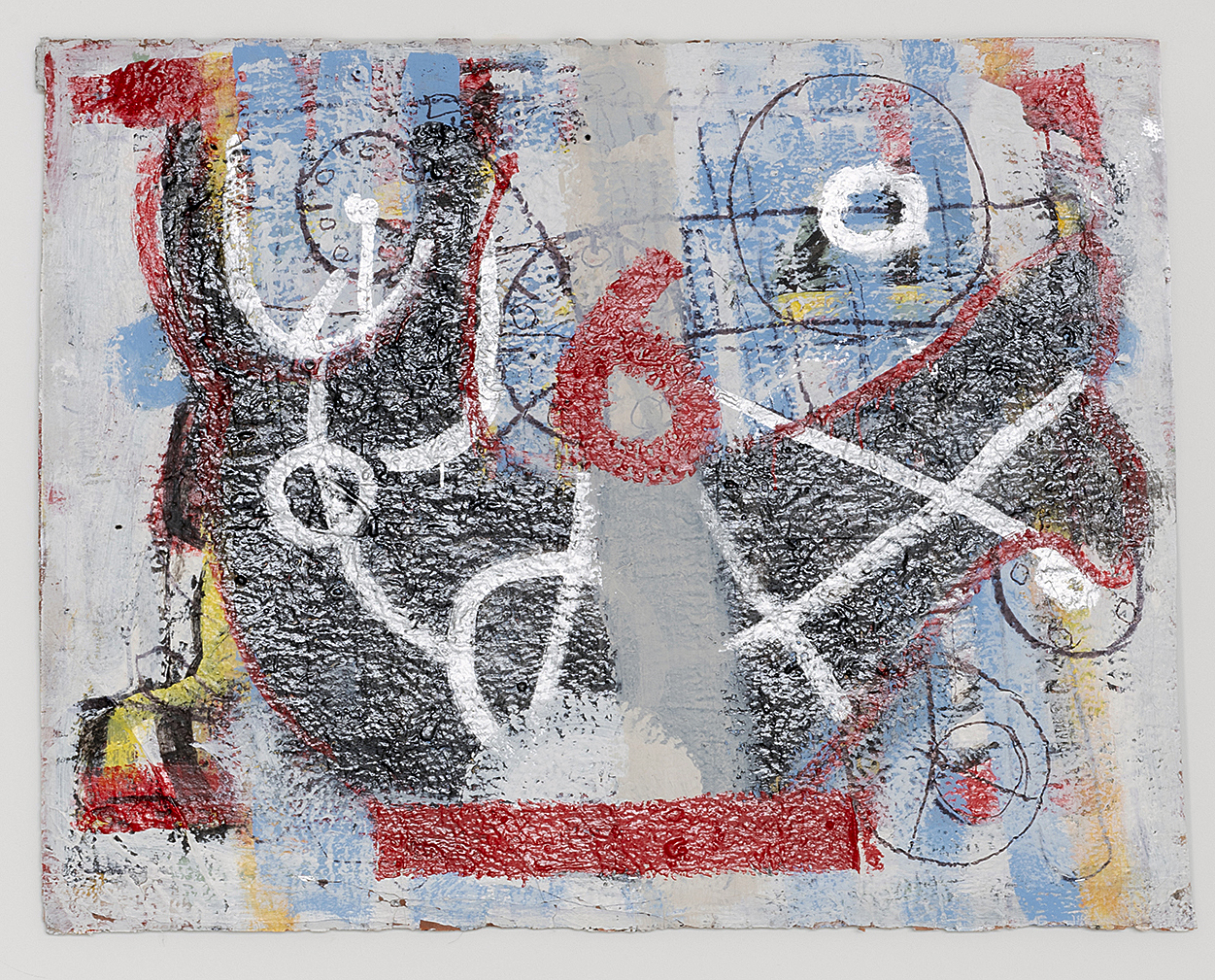 It’s very, very hard to make a good painting, and many artists never find their way forward.  One of the cherished rewards of long experience for a  favored few  is their ever-increasing ability to get it right most of the time.  Michael Luchs is one of that lucky and dedicated number. It’s a particularly cruel irony that the paintings in On the Fly, which depend upon visceral physicality for their psychic charge, can only be seen right now at one remove, in cyberspace. 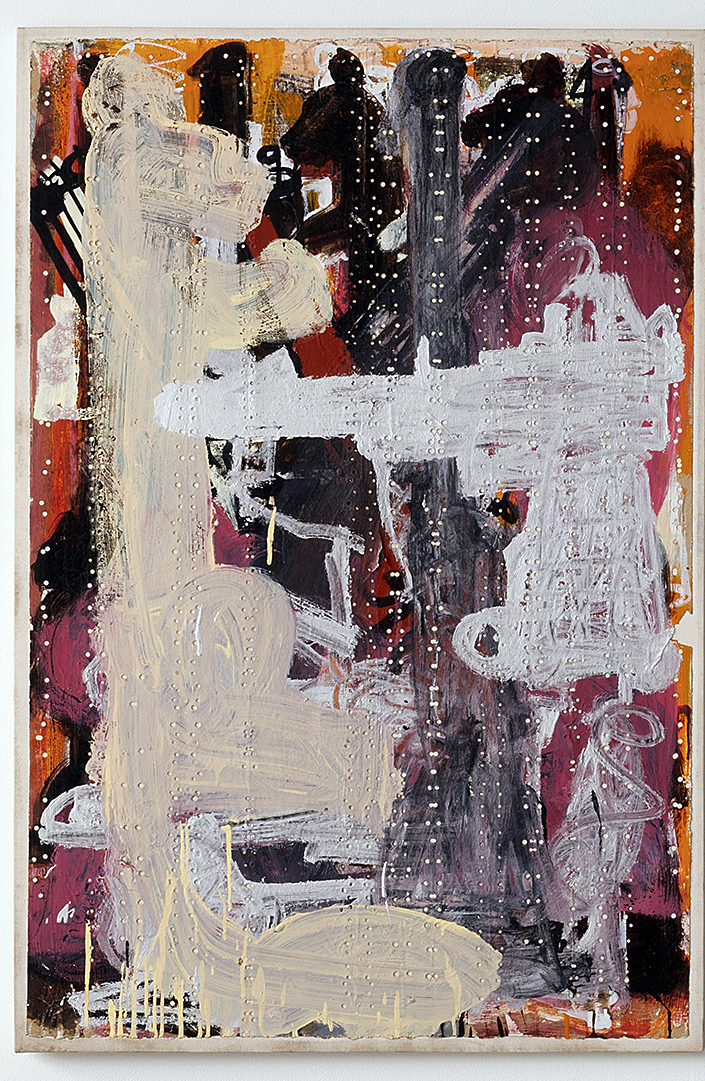 Although the gallery is currently closed because of the pandemic, it’s possible that the restrictions on social interaction will be lifted before the closing date on July 30. In the meantime, I am finding that all online exhibitions are not created equal; fortunately, the images on Artsy for On the Fly are quite high resolution, and about as good as any available on the internet. You can view excellent images of the paintings in the exhibit here.