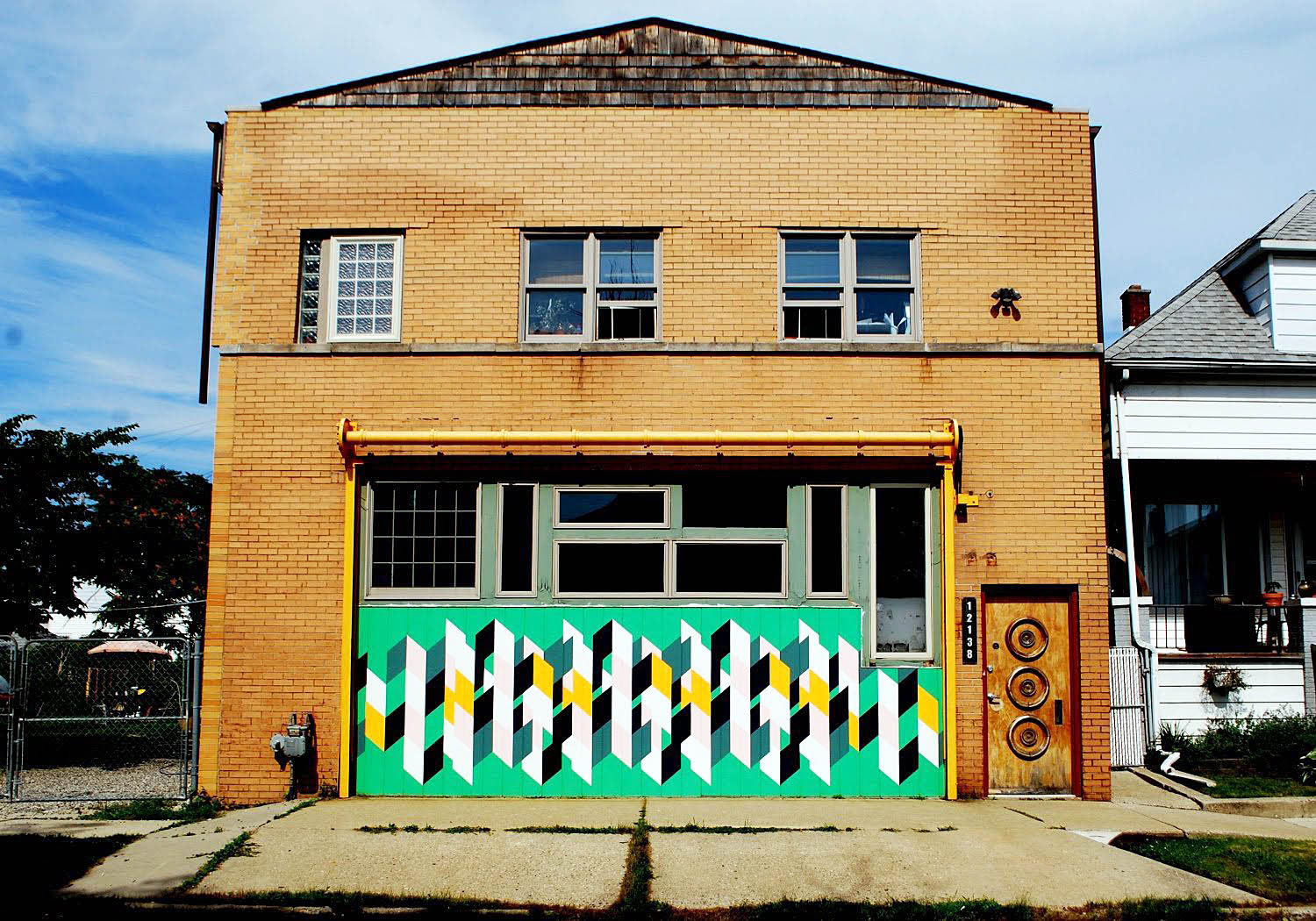 All the world’s a gallery in a time of closed doors and shuttered art spaces. So leave it to Hamtramck — Detroit’s microcosm of storied Eastern Europe and Middle East immigration, rustic industry, and old-world charm that embraces punk rock and pierogis with equal relish — to flex its creative chops to inspire, engage and welcome interaction. Gina Reichert and Mitch Cope’s latest project, Ride It Sculpture Park, combines skateboarding and public art. Chido Johnson co-founded the Zimbabwe Cultural Centre of Detroit serving artists by breaking down borders and boundaries. Chris Schneider continues his own practice as well as exhibits some of the best of Detroit at his Hatch Gallery.

Another of the standouts in this inspiring entourage is Graem Whyte and Faina Lerman, co-founders of Popps Packing and Emporium. There’s no shortage of press on this dynamic couple. I could easily provide a bunch of links and you’d get a solid picture of the buildings they’ve purchased and renovated; and the prestigious grants that allowed that to happen. You’d be well versed in their individual achievements as artists, each in their own right. What’s behind all that is their cultural and social contribution to the neighborhood they’ve helped to transform while raising a family under the same umbrella. 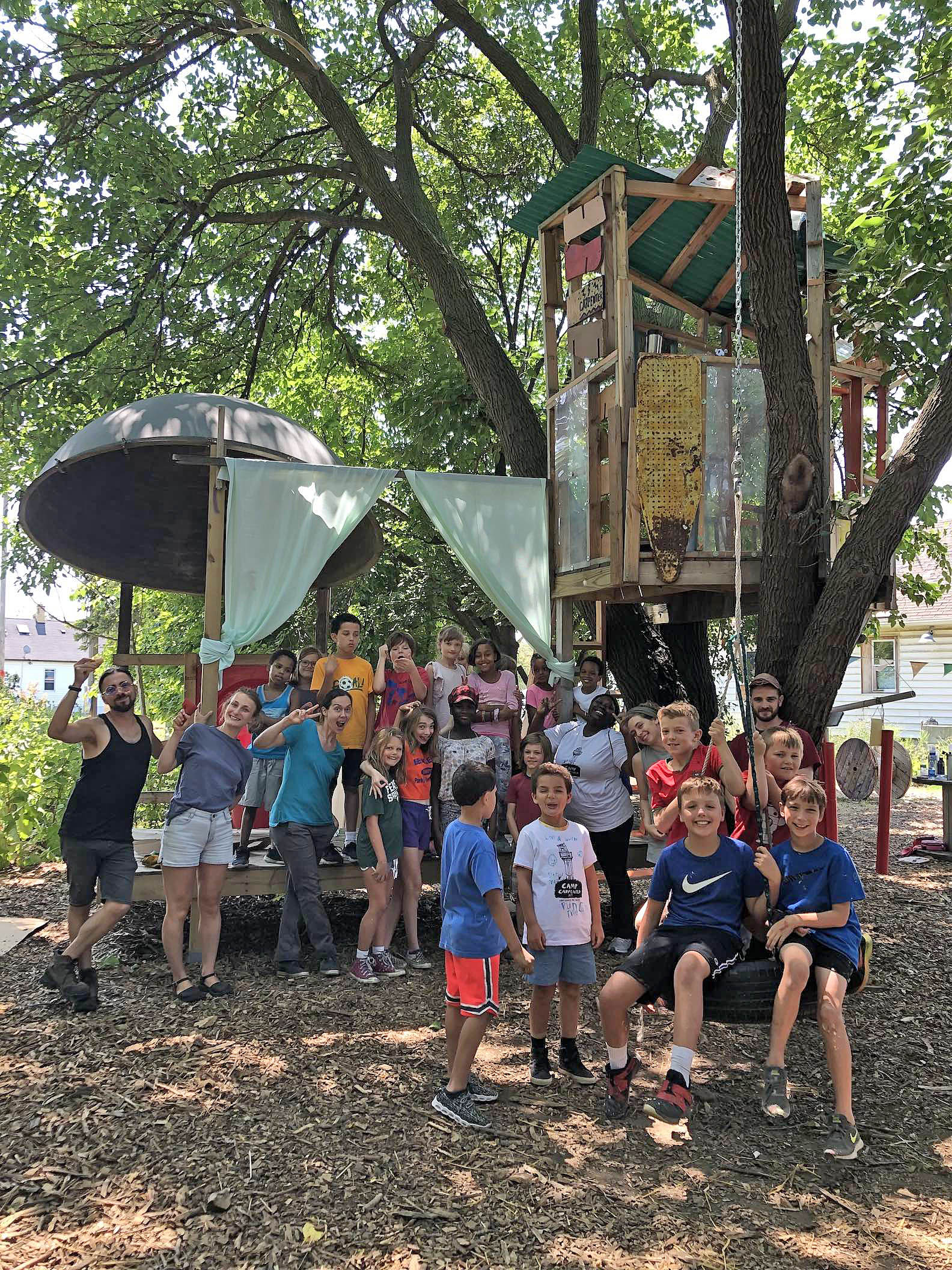 When entering Popps Packing for an exhibition, you’ll likely be greeted by their two dogs. Kids are welcome and are free to tear around the large backyard, inventing games using any of the unusual sculptural structures once elevated and gallery-presented now doubling as playground equipment. A favorite event there is the Pinewood Derby fundraiser. Local artists from all over the Metro area completely ignore all Boy Scout instructions to construct the wackiest, usually unbalanced, excessively heavy and very much, sometimes purposefully, flammable vehicles. These semi-functional contraptions are put to the test in a vigorous racing contest that causes competitors to double up with laughter and feigned agonizing defeat when their car loses to a LED illuminated octopus in a polka dot dress. The party lasts well into the night on beer, grilled cheese and Yuen Hom’s famous rum cakes. 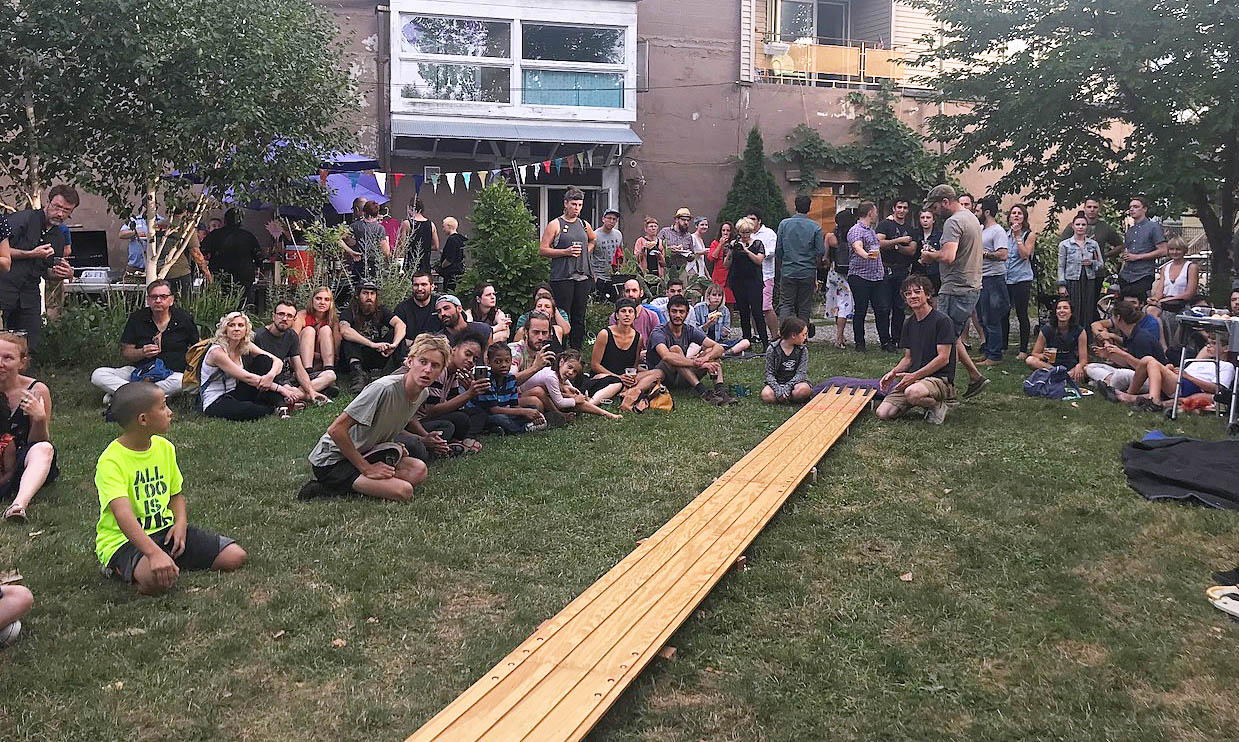 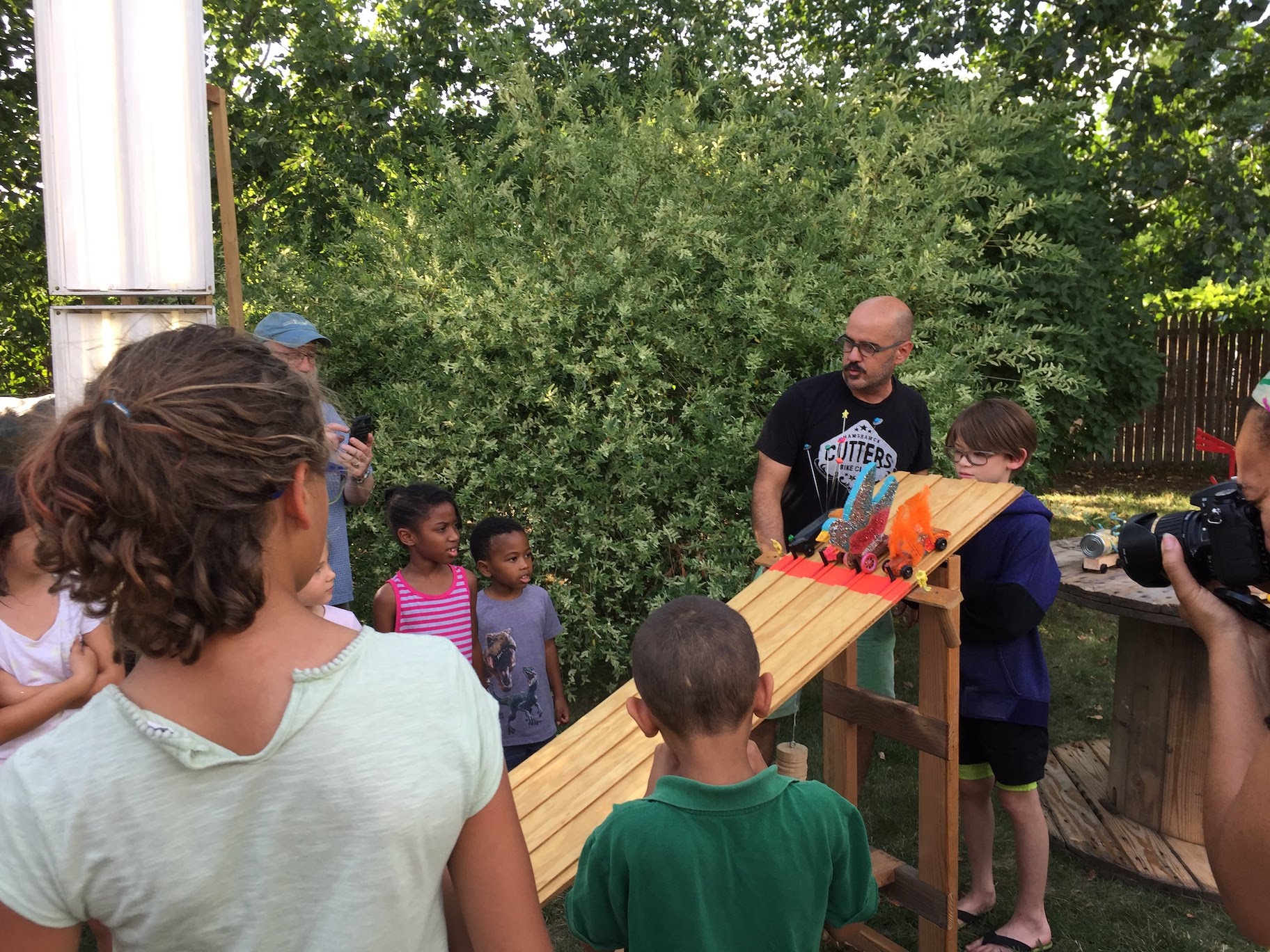 These kind of events draw neighbors as well as artists in a convivial heterogeneous social brew. With a desire to “find space to continue to be fluid with programs that are spontaneous and responsive as opposed to contrived and formalized,” Lerman says. “It’s also walking a fine line between being credible as an art venue and still being a home that welcomes folks in.” While most traditional gallery spaces can present as a bit intimidating to the uninitiated, this easygoing approach welcomes all who are curious. 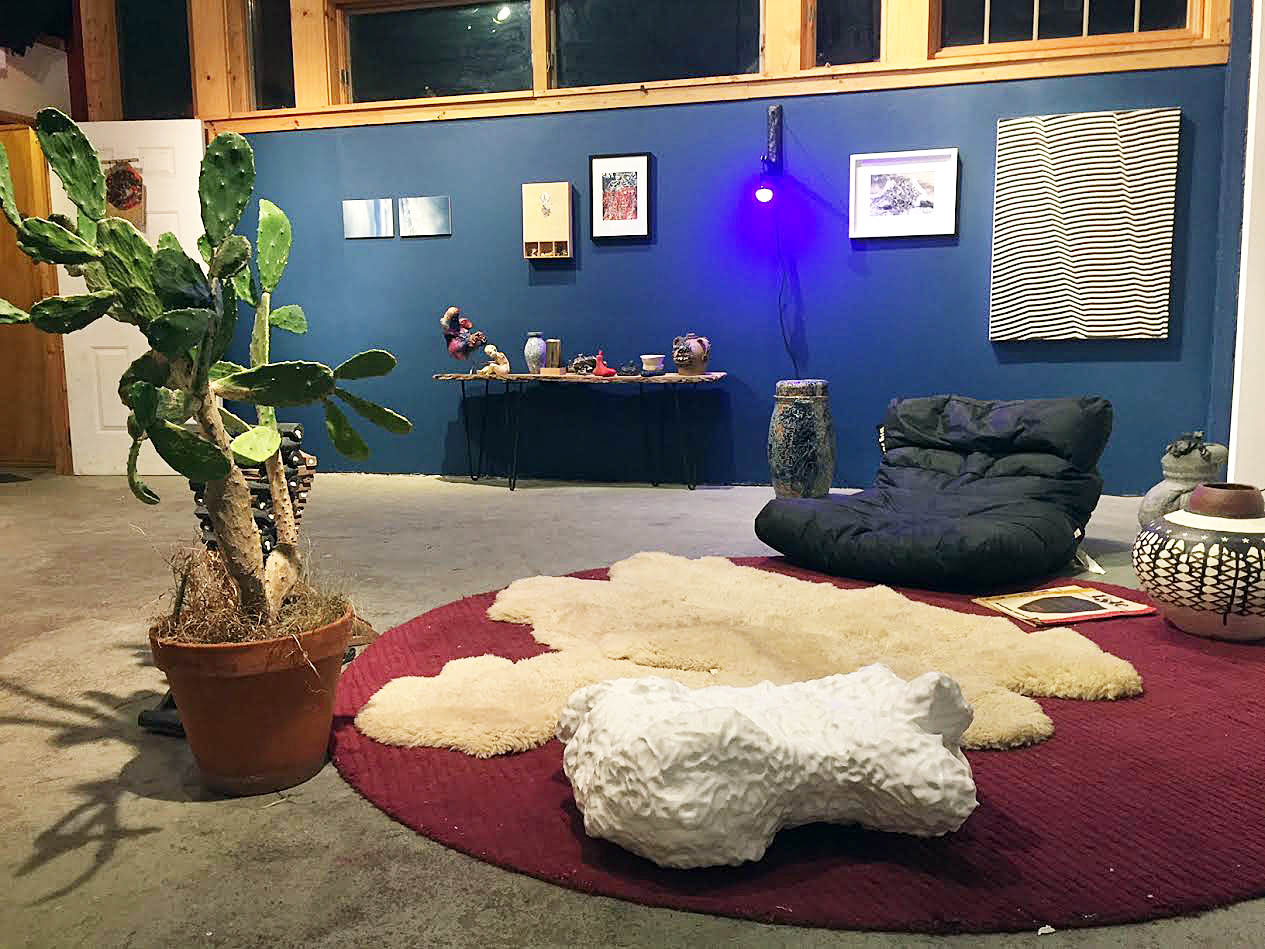 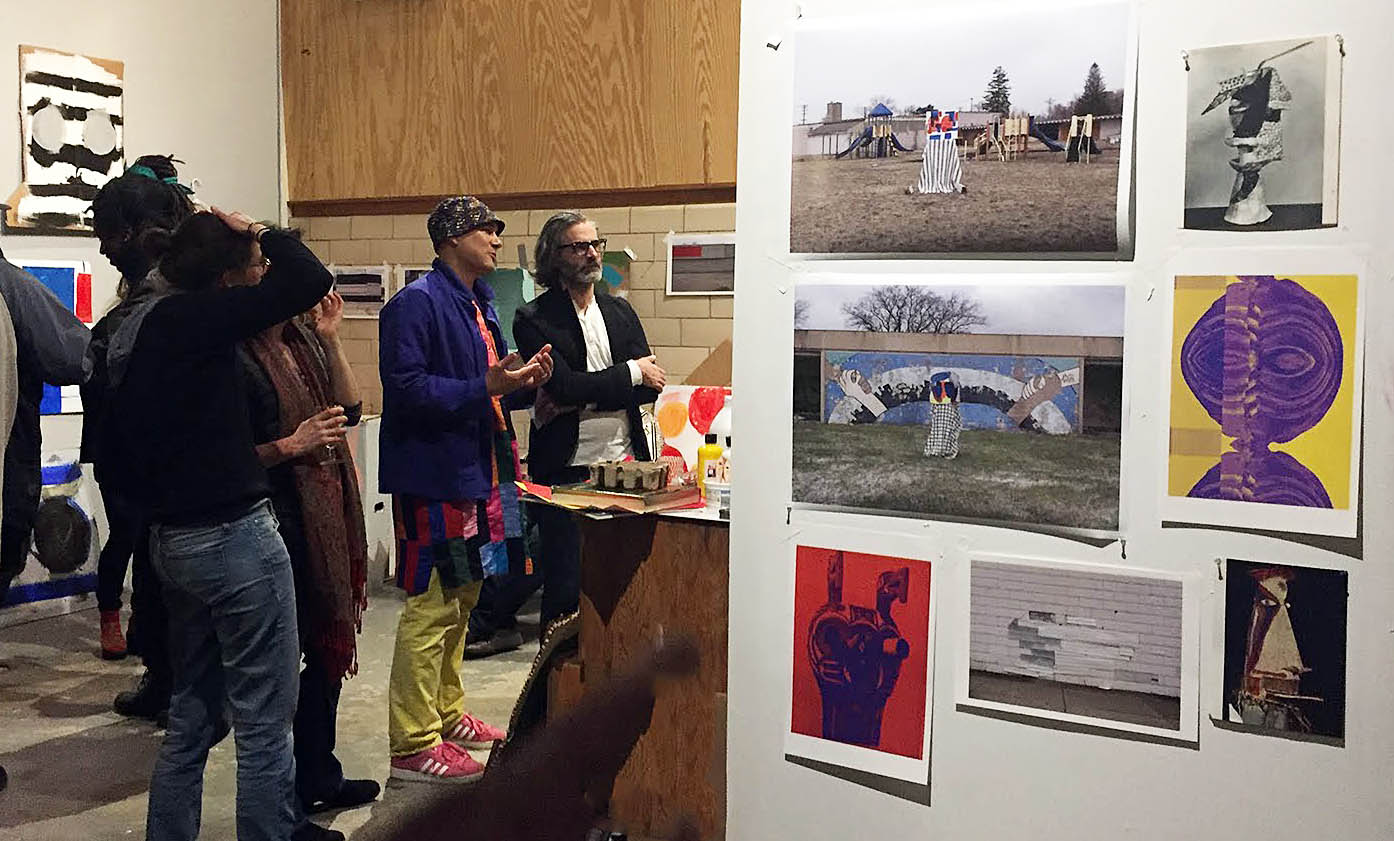 With the arts ecosystem severely limited right now, these innovators adapted to the current landscape by embracing The Pause to step back and reassess their message and mission going forward, emerging as a stronger, clearly focused arts platform. As a community-based ideal and an awareness that not everyone has access to the internet, they aren’t jumping on the Zoom bandwagon but choosing to stick with their holistic approach focusing on a residency-based infrastructure. It’s also afforded some much needed studio time to reacquaint themselves with their personal art practices that have mostly taken a backseat to the steady exhibition schedule and certainly the business of raising a family.

While we eagerly await new work, Whyte’s Remain Calm installation at the Oakland University Art Gallery returns relevant in our current circumstances. Whyte’s tenet that we must ‘remain calm’ in the face of potential catastrophes says, “I’d like to think we can change the course of history if we really want to, even if it seems impossible.” 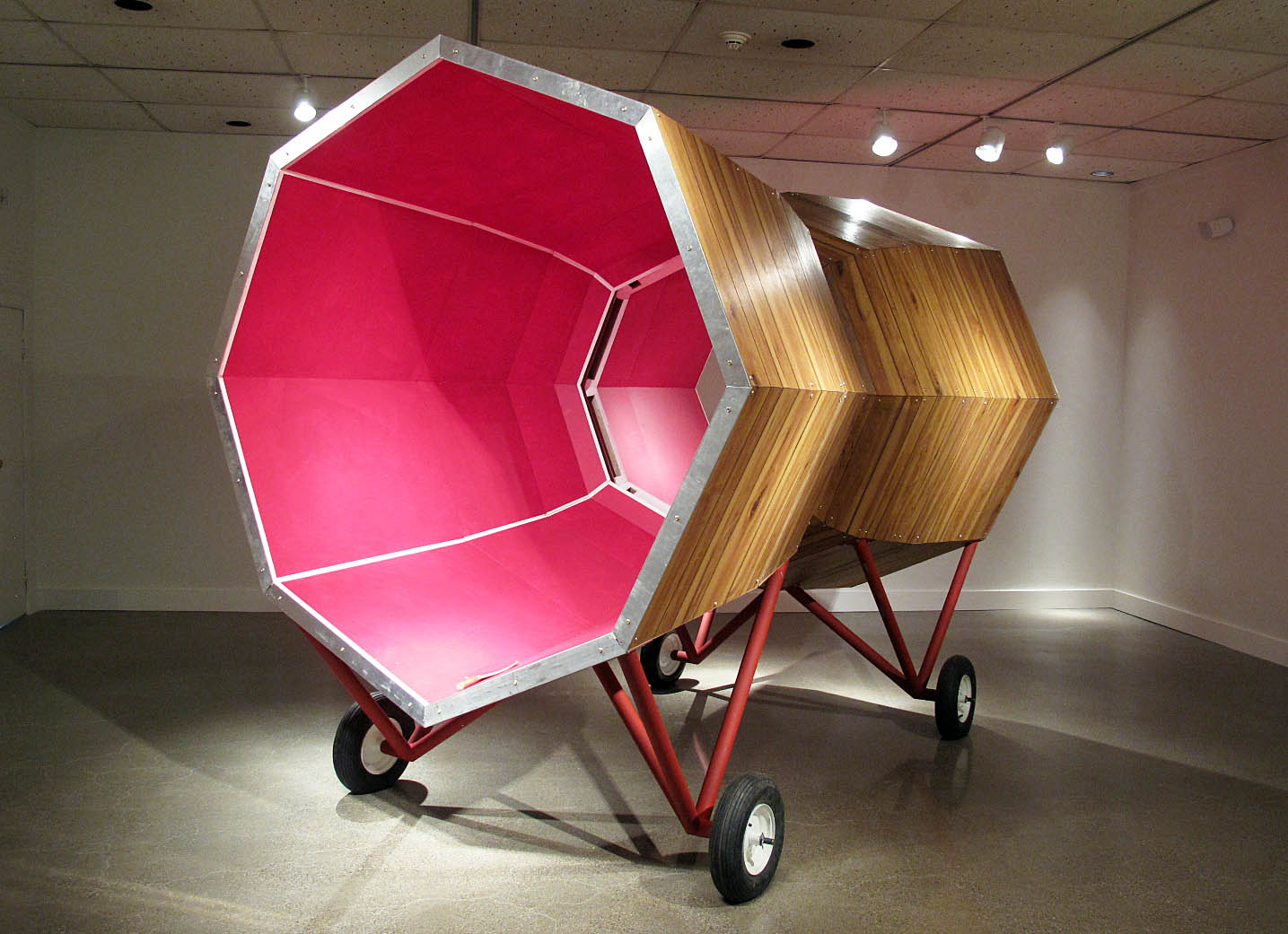 Whyte continues: “Remain Calm was in 2012, and there was a bit of buzz about the Mayan Calendar and the whole ‘the Apocalypse is coming’ thing, and the show was a response to that. There were four main pieces in the show, each one correlating with one of the Horsemen of the Apocalypse, but instead of death and destruction, my approach was to think of transformation. So instead of Death, Famine, Conquest and War, my pieces embodied Rest, Meditation, and Love/Play. Make Love Not War was a sort of ping pong vortex and was a nod to battle, but with the spin of play and positive interaction. I guess the concept of that show relates today as well, as we are all forced to pause and reflect in an uncertain time. And MLNW will be undergoing a transformation of its own in the next couple weeks as it is reworked into a new chicken coop for Popps.” 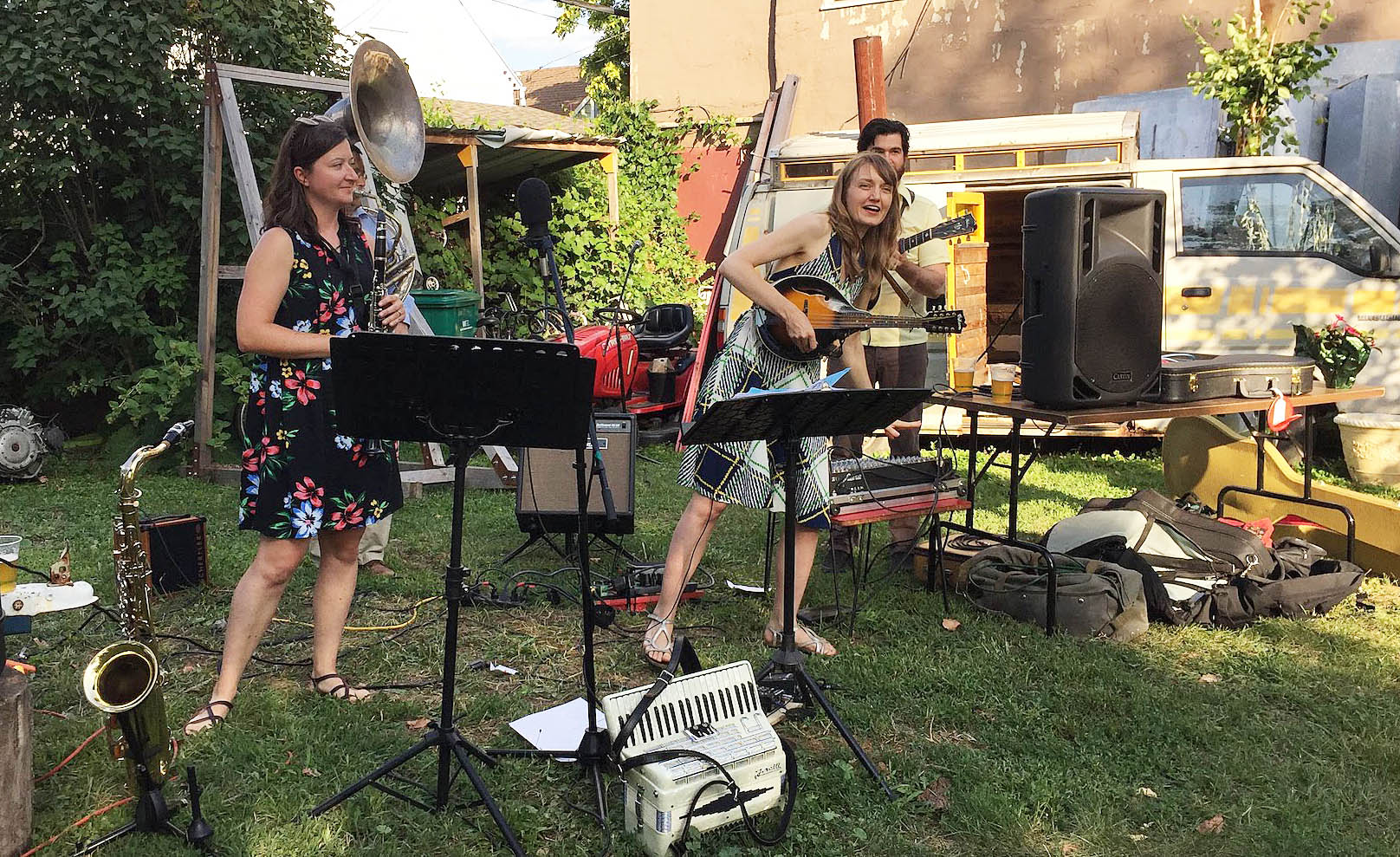 With such a concentration of ingenuity contained in a few square miles, it’s a clear illustration of how energy generated by one inspires another until an entire community is humming with creativity.  Whyte comments, “I’m generally of the opinion that positive thoughts go a long way in determining our futures.” Turn your babushka into a mask, throw on your docs, grab the kiddos and scope out a little hometown live art.