“There is a connection, hard to explain logically but easy to feel between achievement in public life and progress in the arts.” JFK

Culture is at the heart of any great city; integral to its experience and legacy. Without that, its buildings and streets stand cold, feral. The Detroit Institute of Arts’ world class collection was allowed to remain intact through the city’s bankruptcy and continues to be critical to anchoring a community where people don’t just want to visit, but want to invest, live, work and put down roots. The Heidelberg Project endured its share of scathing criticism, and arson, only to stand today as symbol of our fortitude. Charles McGee’s recent sculpture “United We Stand”, installed outside the Charles H. Wright Museum of African American History, continues that call to creative arms. 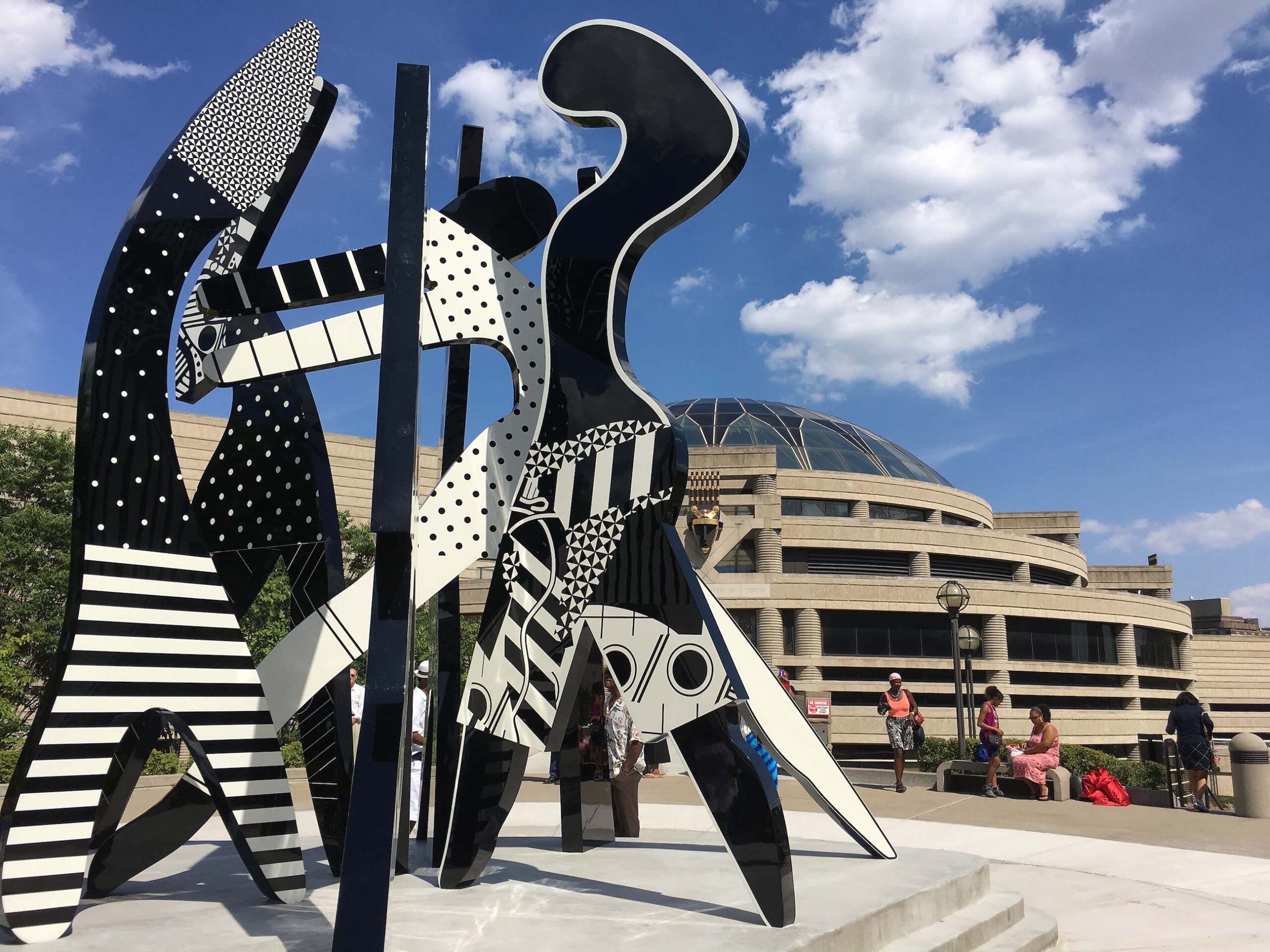 Robert Schefman, Faculty Professor at the College of Creative Studies and an artist of over 40 years experience with public shows, commented, “For centuries, public art has been a responsibility for those who governed, and could afford the funding. In America, theoretically, we are the government, and democracy puts responsibility for public work, with the public. I will assume that there is some agreement on the benefits of placing artwork in public for everyone to enjoy, regardless of their position in society, because the communication of ideas and experiences through artwork of any discipline enrich us all.”

However, he continues, “When we talk about public art, we change how we relate to our spaces. Change is a double edged sword, and the changes are not always desired by current residents, no matter how much it will beautify, or improve an environment. A mural is placed in a space that draws more people into the area, and the look of the area, altering the way the current occupant feels about “their” space. People often fight change.” Case in point is the installation of “Waiting”, a 17-foot bronze sculpture by internationally acclaimed artist KAWS. The piece is sort of a cross between a Disney and an M. Night Shyamalan character. To say it provoked a strong response is an understatement. Whether attracted, repelled, confused by it, most can’t resist taking a selfie with it. It does what art is supposed to do, engage with the viewer. 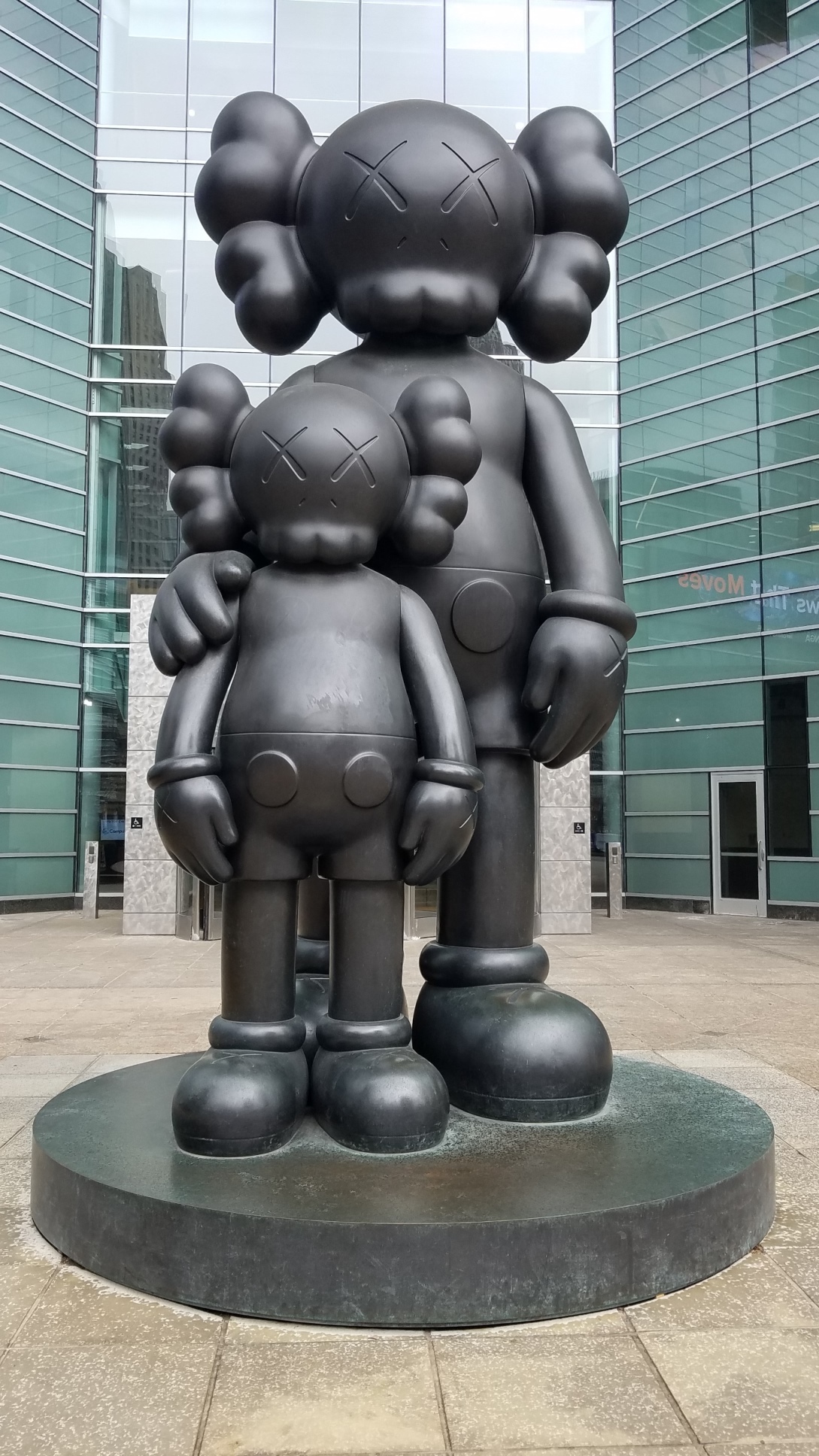 Born from a public art project on New York City’s High Line, John Sauvé enlisted students from a local school where arts funding had been cut. Very quietly and with little promotion, a silhouette of an orange man sporting a fedora began appearing on city rooftops. Now known as The Man in the City International Sculpture Project, the on-going installation is comprised of 60 sculptures located on the rooftops throughout the City of Detroit and Windsor. The Man in the City Project creates a metaphor for life that transforms the skyline and encourages people to look around. It’s an ingenious vehicle to highlight this city’s sensational architecture as well as prompt the viewer’s sense of their place within the city. In our increasingly busy lives, our faces habitually planted in our handheld screens, the sudden materialization of a bright figure incongruous with its architectural host gives pause and a moment to remember ourselves and our community. 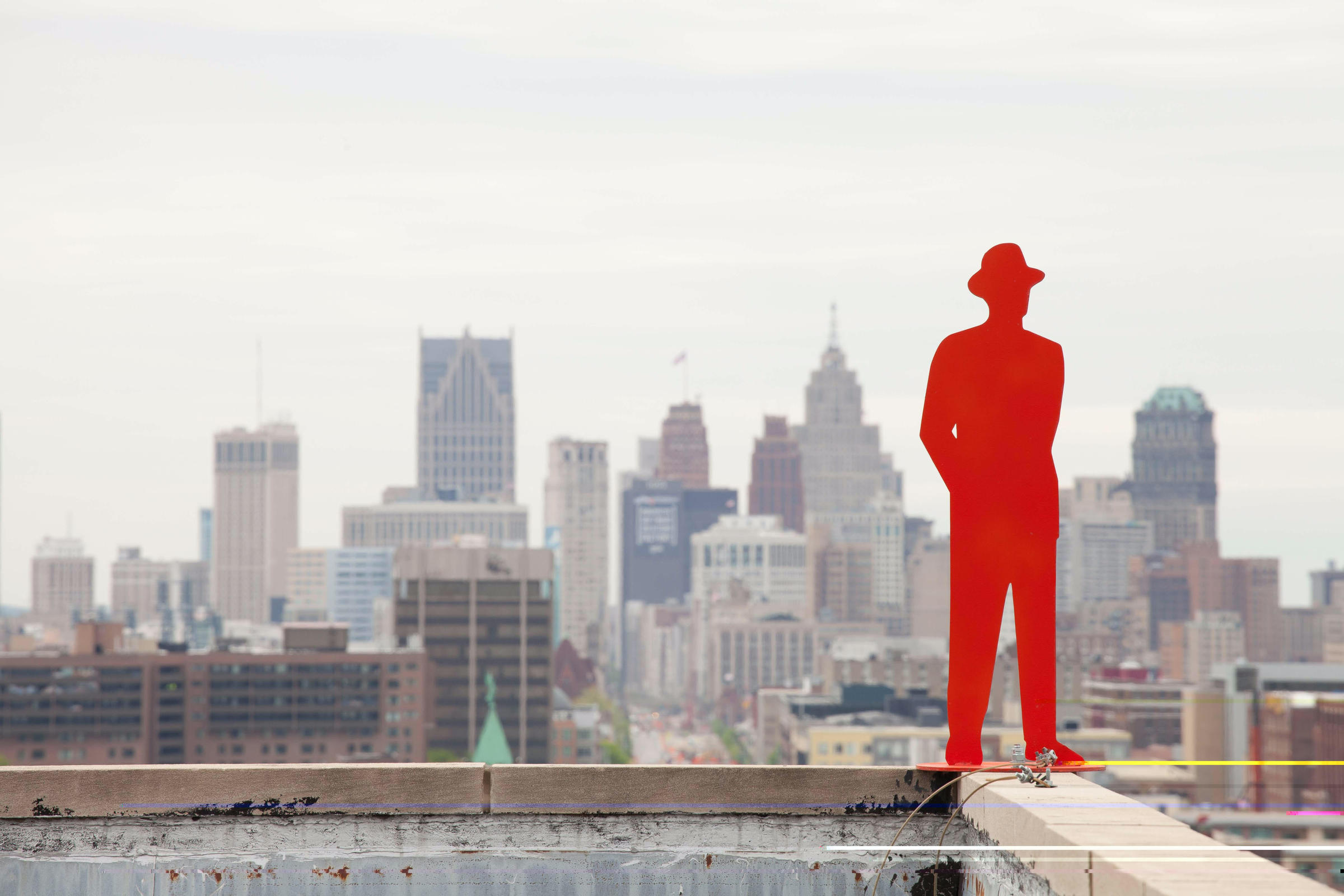 Until recently public art traditionally consisted of elegant sculpture arranged in neatly manicured gardens or parks leaving two-dimensional art relegated to gallery and museum walls. Graffiti has been around since Lascaux Cave’s Paleolithic I-was-here paintings. Contemporary inscriptions became ubiquitous on any modern city’s decaying buildings. Rough and raw, quickly written, it was considered an emblem of decline and abandonment. As the global spotlight on Detroit’s ravaged neighborhoods grew brighter, images of that blight were distributed worldwide. What those images failed to convey was our soul. Detroiters know how to grind. Our resilience has been historically expressed through note and rhyme. Today, it’s described in canned brushstrokes, metals and ink. Indigenous graffiti has evolved from a name scrawled under a bridge somewhere into beautifully executed pieces displayed proudly where everyone can see them. Bold and immediately recognizable styles envelop buildings from Eastern Market to the Creative Corridor. As Schefman stated, there is resistance to change. Those first towering blasts of color, although legally commissioned, still carried the old stigma. Is it vandalism or is it art? 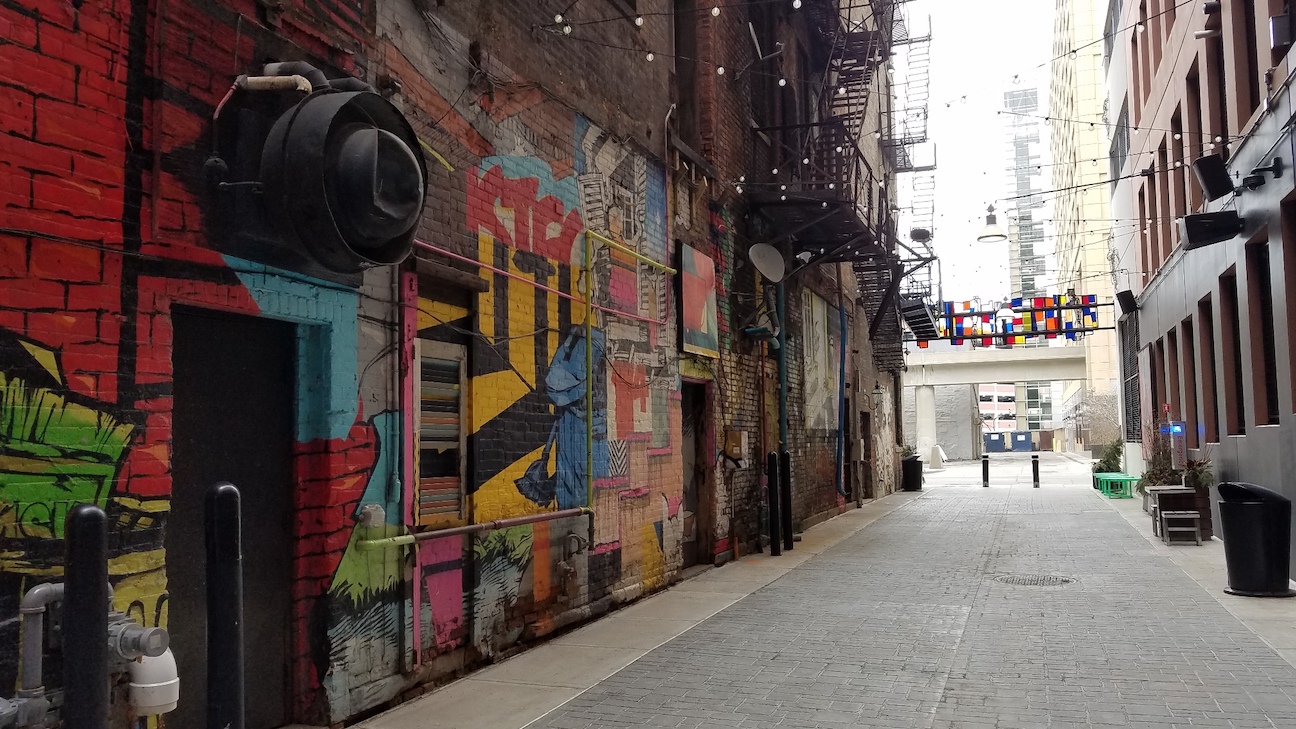 One the highest concentrations of street art in the world is The Belt/Z Garage’s international collaboration of writers. You can’t miss Shepard Fairey’s mural on One Campus Martius. His smaller piece “Pattern of Destruction” is part of the Belt, a culturally redefined alley between Broadway and Library Street showcasing a gauntlet of creative minds including Cleon Peterson, Nina Chanel Abney, Pose, Hoxxoh and our own Tiff Massey. Peterson describes his images of faceless street fighters as “a gray world where law breakers and law enforcers are one in the same; a world where ethics have been abandoned in favor of personal entitlement.” Tiff Massey references African culture in her work and says, “It’s always going to be large. It’s always going to be in your face.”  Their work turns a meal, a couple cocktails and a packed gallery opening into a raucous street fair. 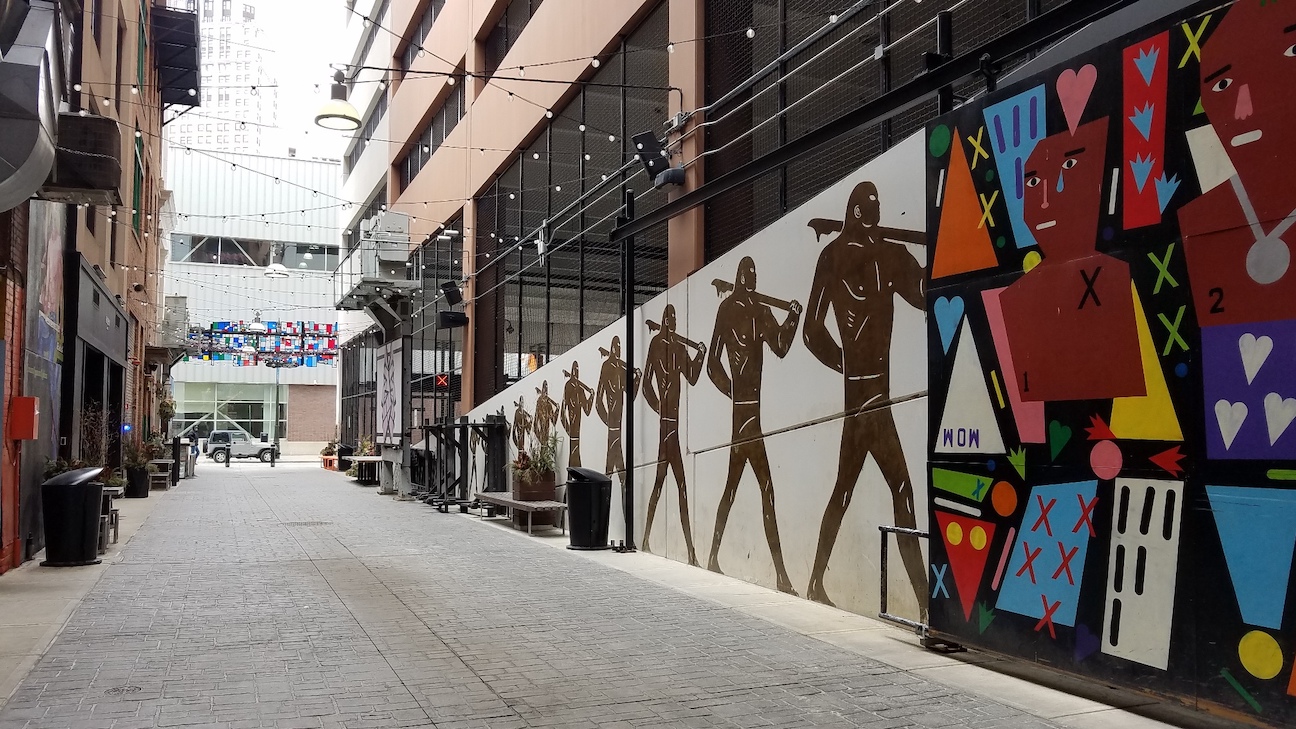 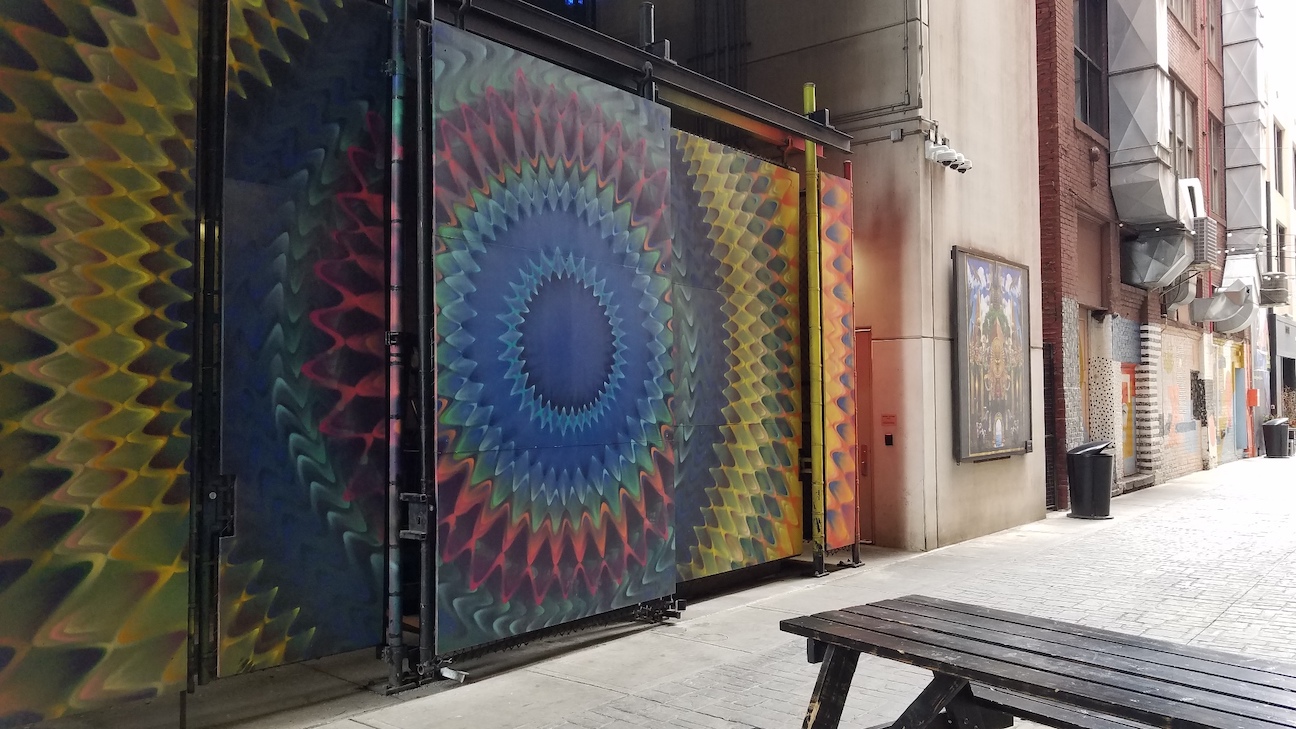 This genre has gotten such attention Detroit hosts the annual event Murals in the Market organized by 1xRun and located primarily in Eastern Market. The sprawling festival draws artists from all over the world. It includes local writers Malt and Fel3000ft who collaborated on a piece for the festival. I caught up with artist Malt, who has prominent aerosol pieces in the Dequindre Cut, Lincoln Street Art Park as well as a few remaining underground tags from when he started writing in 1994. His style was inspired by skateboard graphics from the 80’s. Strong color, hard black lines. He says, “Graffiti has always been here. People evolved and got better. Everyone’s still doing their thing just on a larger scale.” Public interest has helped him out tremendously. Before it was all out of his own pocket. Now he gets commissions and has gallery representation. “There’s been a huge progression over the last 10 years. It’s rad. People respect it. It attracts more people to the city.” He adds, “I’d rather look at a colorful wall than beige cinder block.” Amen. 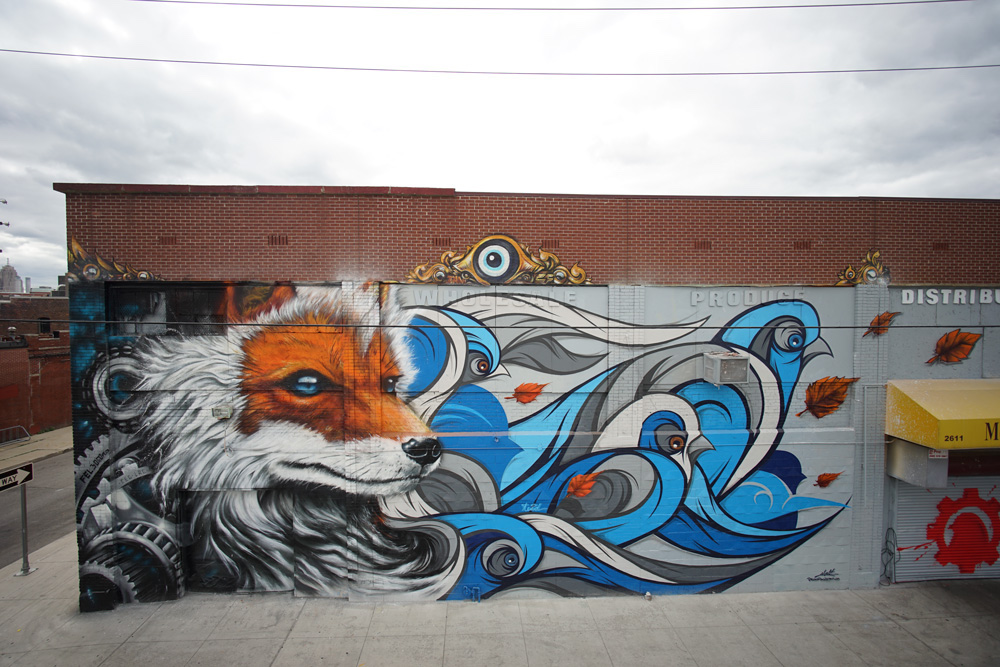 Malt-Fel3000ft collaboration 1xRun Murals in the Market, courtesy of the artist

No more cloak of darkness with a backpack full of cans. This art form is legit. Love it or hate it, the work is stunning, fun and livens up how we look at life. I still have mad respect for an old school tag dangling on a freeway overpass. As with any art form, how’d they do that?