ANTHROPOCENE Paintings and Drawings for the New Normal

KA Letts’ title ‘Anthropocene’ refers to the current geological-time epoch where humans have the greatest impact on the Earth’s environment. The term was first introduced by Nobel Laureate Paul Crutzen in 2000 and has gained popularity in elite scientific circles. Humans are the first species keenly aware of our drastic planet-scale influence causing mass extinctions of plants and animals, pollution of the oceans and alteration of the atmosphere. Letts’ work references this phenomenon through myths and stories from our shared cultural history. 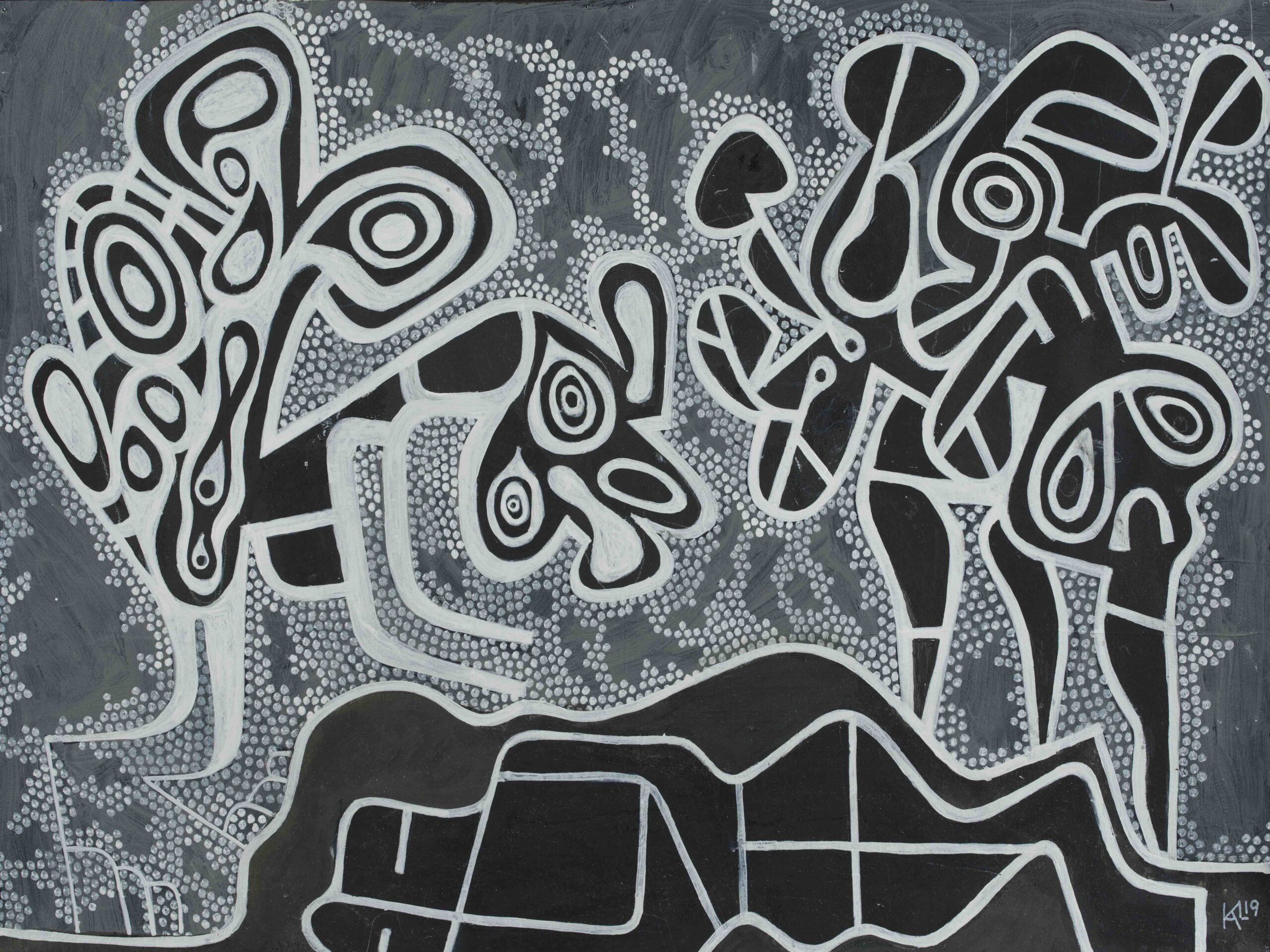 In Greek mythology, Phaeton is the bastard son of the sun god Helios. In an attempt to prove his paternity, Helios gives Phaeton permission to drive the chariot of the sun through the heavens for a single day. Phaeton is unable to control the horses of the sun chariot, driving them too close to the earth and scorching it. Zeus stops the madness with a thunderbolt, killing Phaeton. Letts draws on indigenous Aboriginal art using one-dimensional geometric shapes accompanied by a Seurat dot-style application that permeates Australian contemporary work. Her style strongly aligns with Native Alaskan artwork that conveys spiritual and physical activity through a similar use of line and shape. The black and white palette allows the viewer to focus on the characters whose physical expression communicates their emotional response to the lifeless soul crumpled at the bottom of the picture. 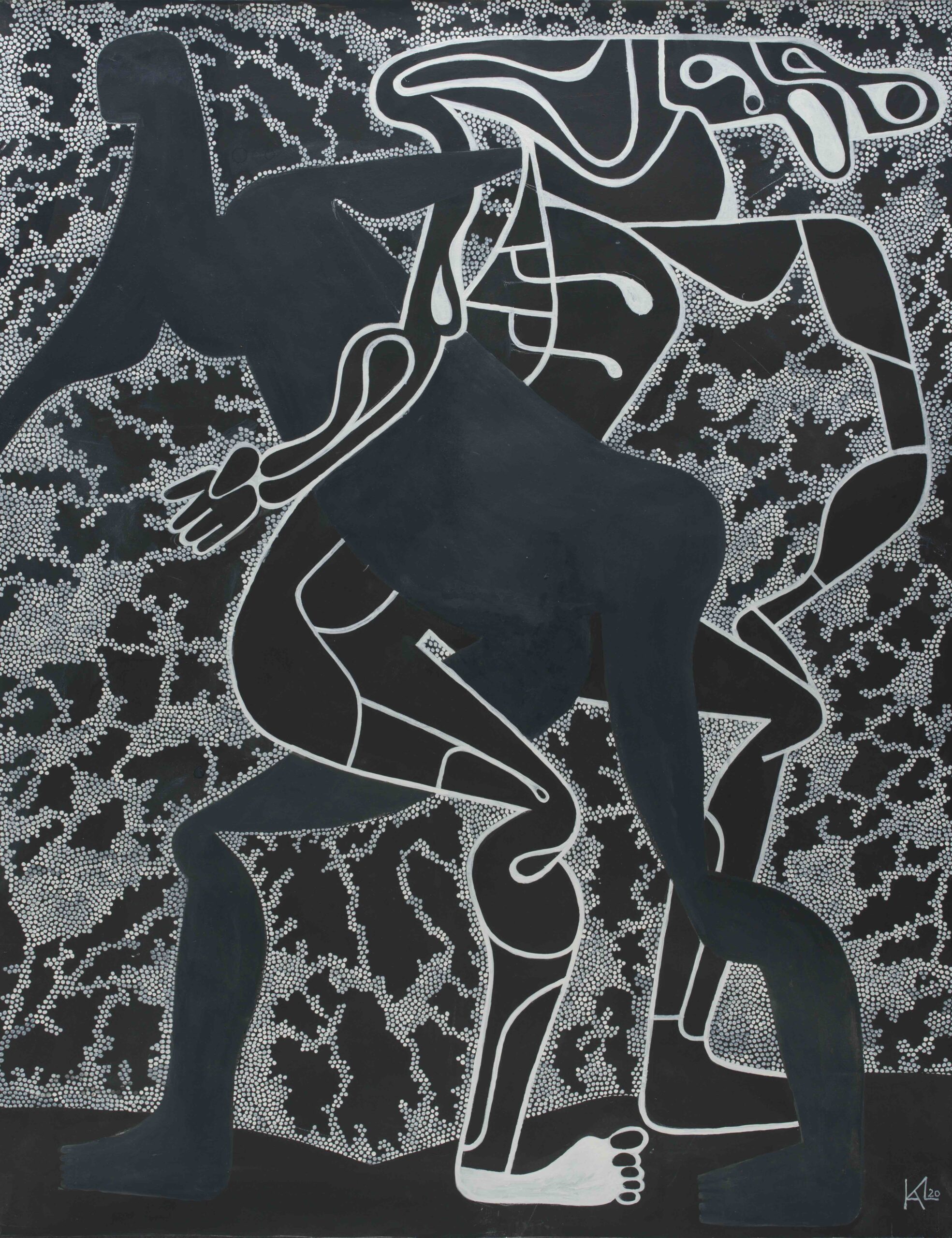 The scale of Encounter immediately demands attention. Before unpacking the subjects and their message, the image twists and moves, inviting a closer look. Upon discovery of the intertwined figures, their intimacy is disclosed. Because one figure is flat black and the other is rendered in that primitive style, this could as easily be a tryst between lovers or a god tangling with its seeker. 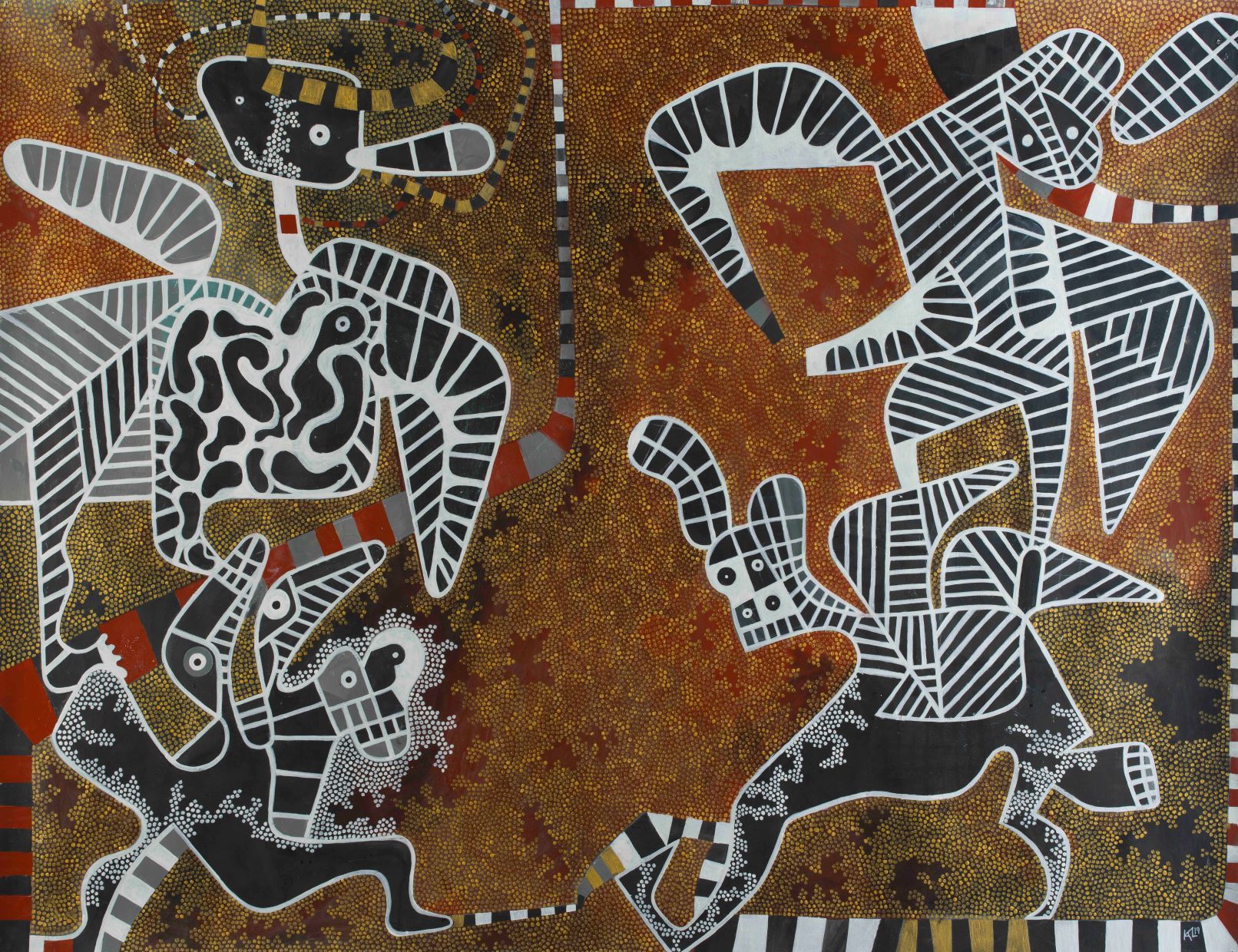 In Three Angels and a Harpy, we are permitted colored pointillism that affords some warmth. Upon first glance, these bending and dancing figures immediately remind of Detroit’s Charles McGee’s striking graphic white patterns on black. There is a very subtle checkered line that snakes through this piece, belting the characters together. It’s difficult to separate the subjects, but no matter. This composition is lively and commands the eye to circumnavigate the picture excavating for interpretation. 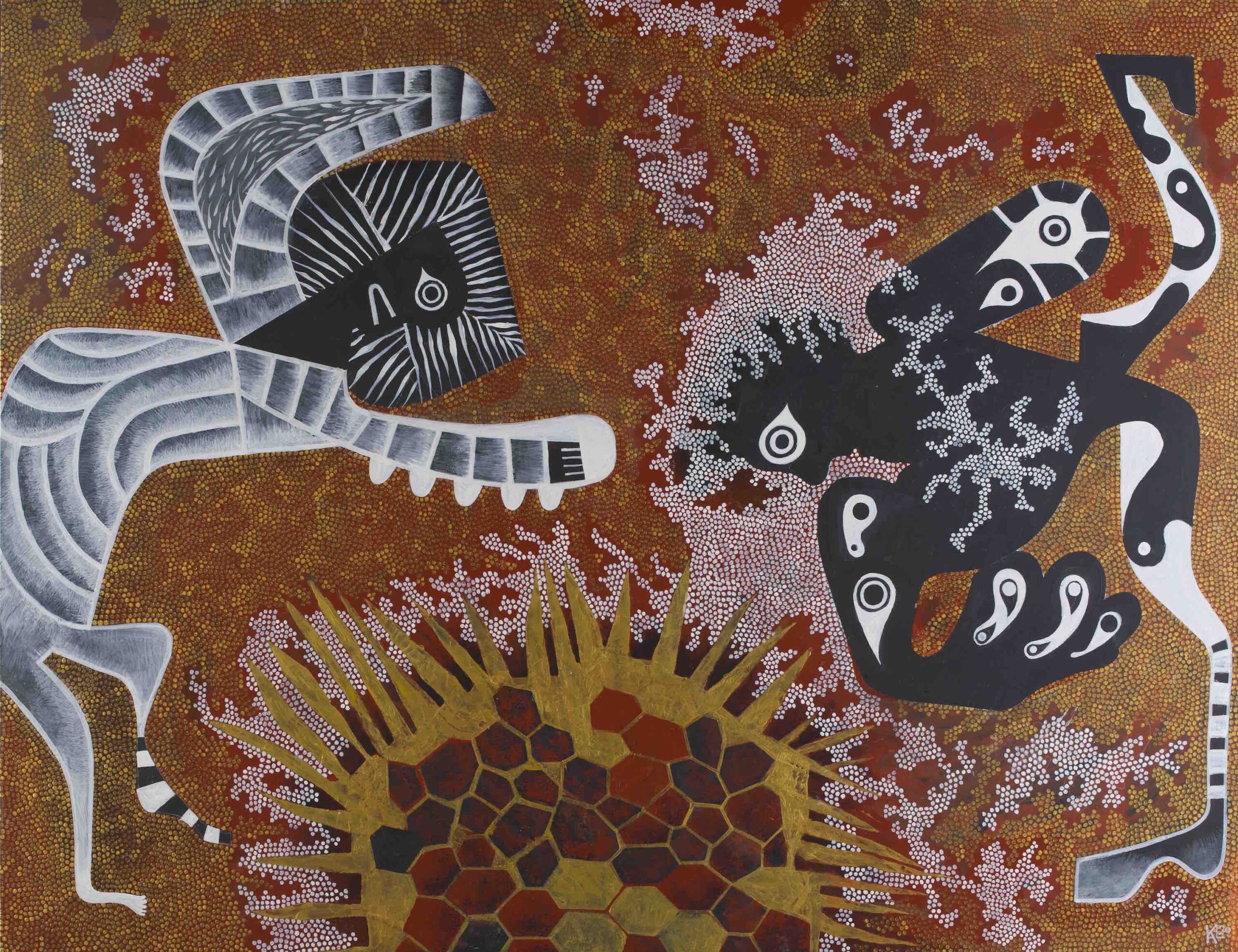 Burning Earth’s character on the right seems to have pitched the erupting fireball while the character on the left shouts in horror “Don’t do it!”. Gods at odds and humans pay the price for their whims. What’s great about this piece is it reads like a mosaic. It’s only upon close inspection the viewer can discern the fastidious application of colored dots. These marks create an almost tactile background. The progressive color values grant necessary dimension behind flat subjects. 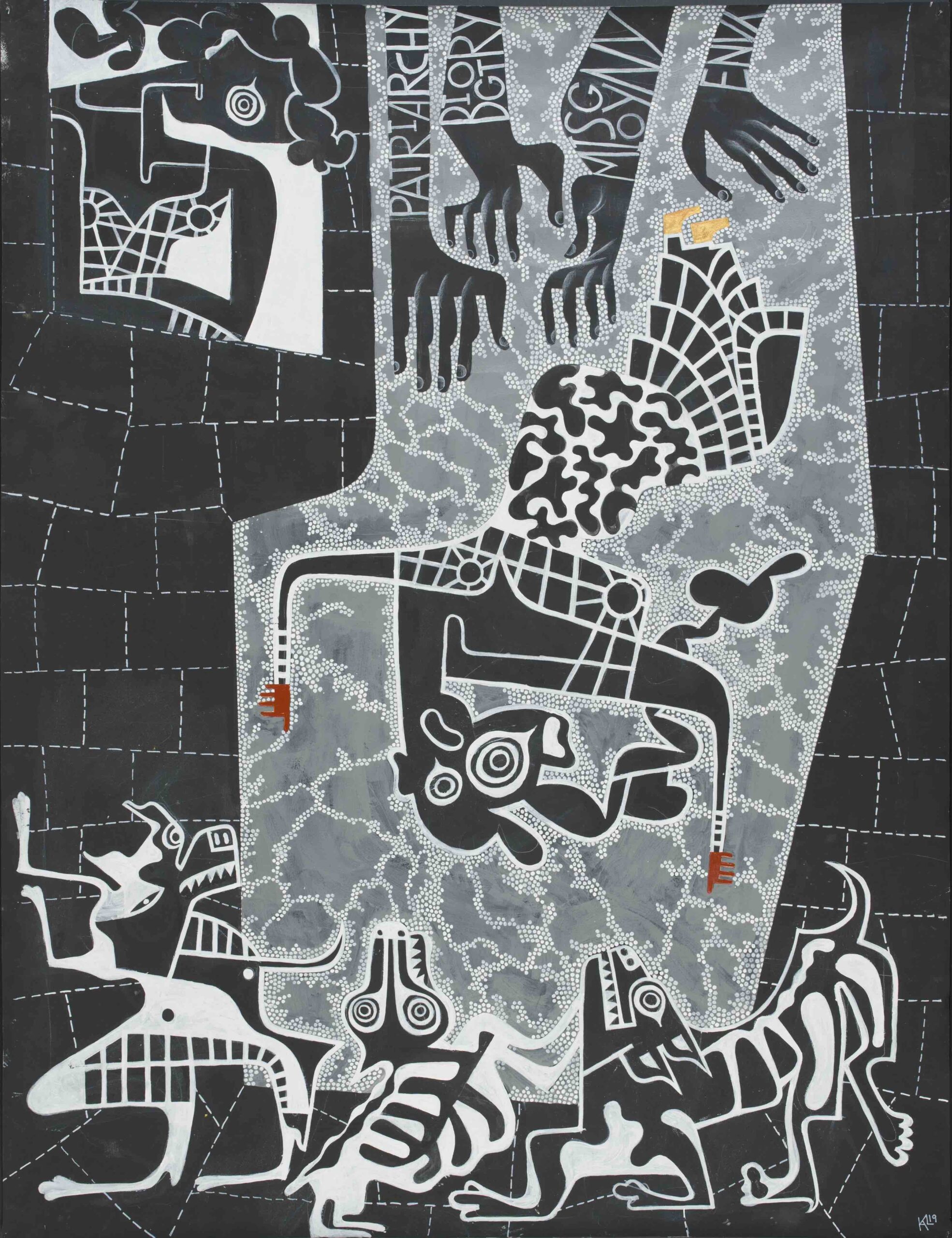 Martyrdom of St. Jezebel is a dramatic piece. Jezebel has been released by judgmental hands, plummeting toward the vicious dogs of fate while an onlooker considers the matter. Letts’ training as a set and costume designer reveals in the stitching of the black structures. Jezebel’s tiny hands and feet are the only afforded color describing her delicate circumstances as well as her person. The text, although not particularly necessary, is well camouflaged and is secondary to the horror of the story taking center stage. 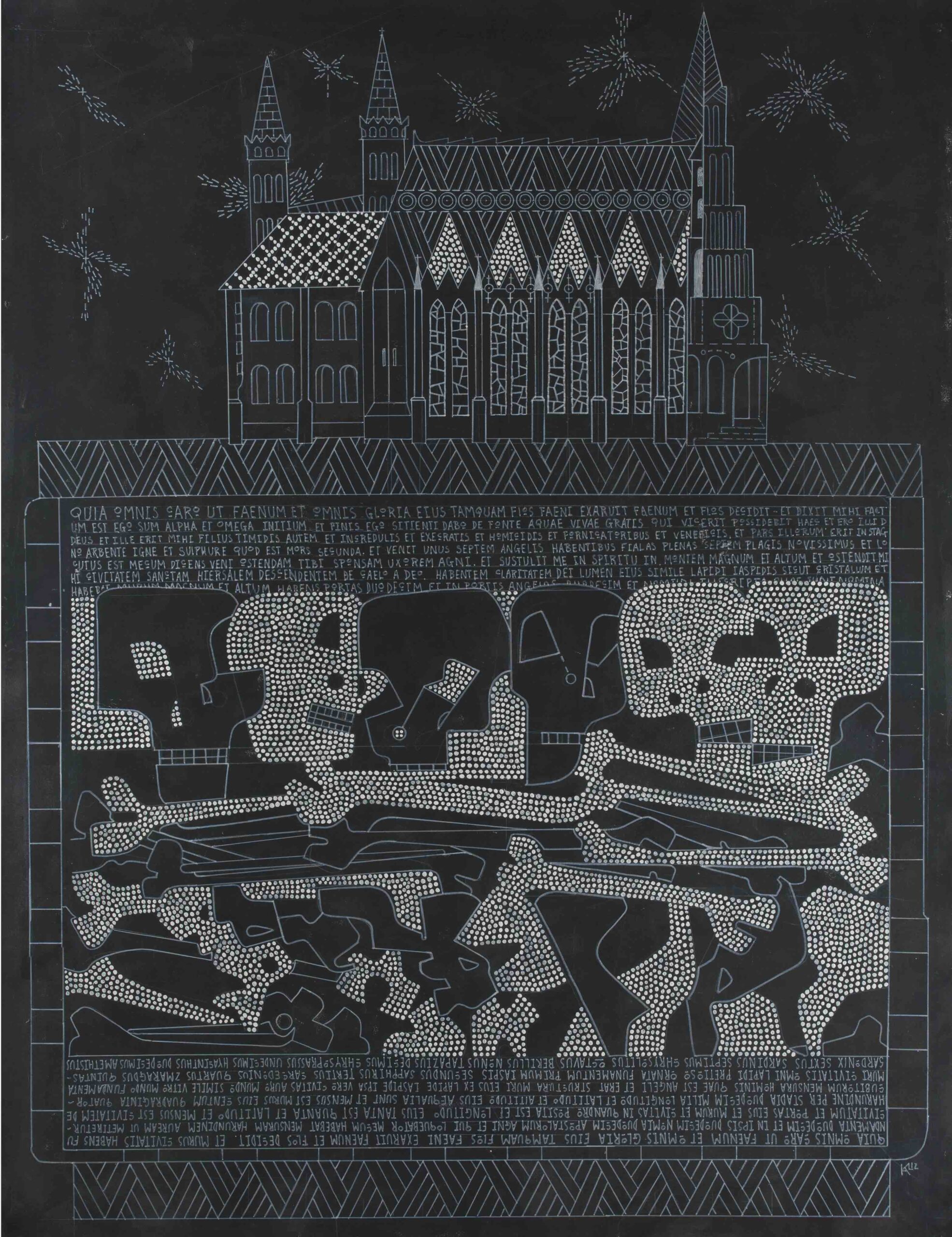 Reliquary resides in the small vestibule ahead of the gallery entrance and can be easily missed, which is tragic because it’s a fabulous piece. Dark and ominous, the skulls call to the European catacombs where overflowing cemeteries had to be relocated in subterranean tombs. Out of respect for the dead, the bones are mindfully organized and stacked in patterns. Several inscriptions, paintings, statues and ornaments can be found in these sacred tunnels, often depicting and exulting Christ. Most religions attach spiritual power to coveted relics. The Catholic Church would have inscribed any religious artifacts in Latin signifying its power. Letts leaves the translation of her mystical text to our imagination.

In a contemporary landscape of interdisciplinary and/or conceptual art shows, straight up painting, when it’s well executed, is a real treat. The skill it requires to invoke an emotional response without controversy, indecipherable imagery or optical tricks is to be admired and celebrated. At a distant glance, Letts’ work appears graphic and precise. Moving in for close examination, the meticulous craftmanship of the brushwork is evident. Artwork has to stand on visual merit, hopefully both compositionally as well as emotionally, or it’s not worth bothering with the written statements. It’s not entirely necessary to read into Letts’ myths and metaphors to enjoy her work. It visually captivates on face alone.

ANTHROPOCENE Paintings and Drawings for the New Normal by KA Letts is on view now through October 3, 2020