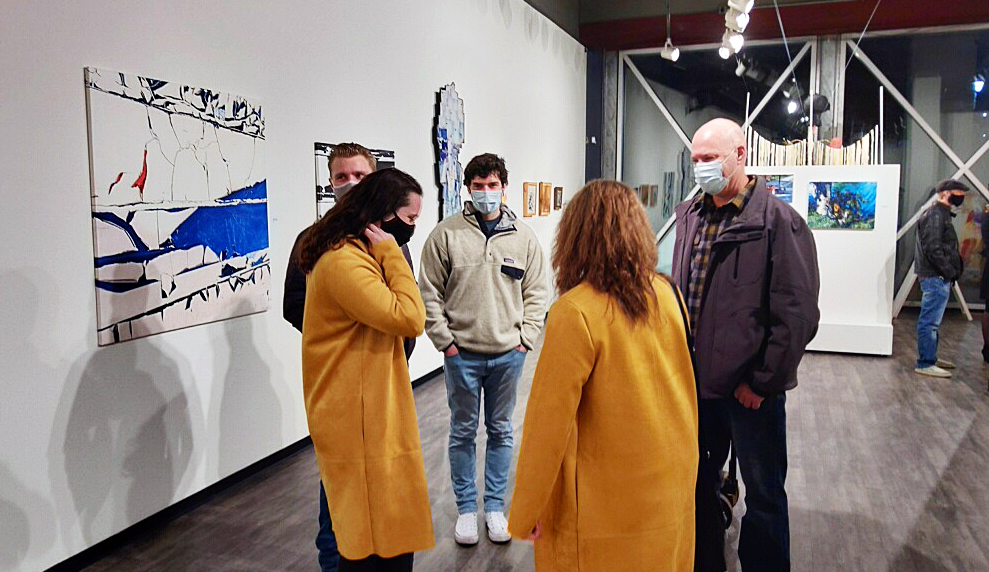 Curated by Holliday Taylor Martindale, “The Salad Days” is a Shakespearean idiomatic expression meaning a youthful time. The millennial renaissance of Detroit from 2000 through 2012 heralded self-made artist run spaces. With rent low and space unlimited, artists gravitated to this inclusive paradigm shift to bring engaging shows. Emerging from a prosperous decade and a world reshaped by the internet, it was a new beginning as much as an awakening. Salad Days explores the subculture and practice of artists who were working in Detroit in the aughts (2000s) while featuring current work reflecting an age of genesis and collaboration. 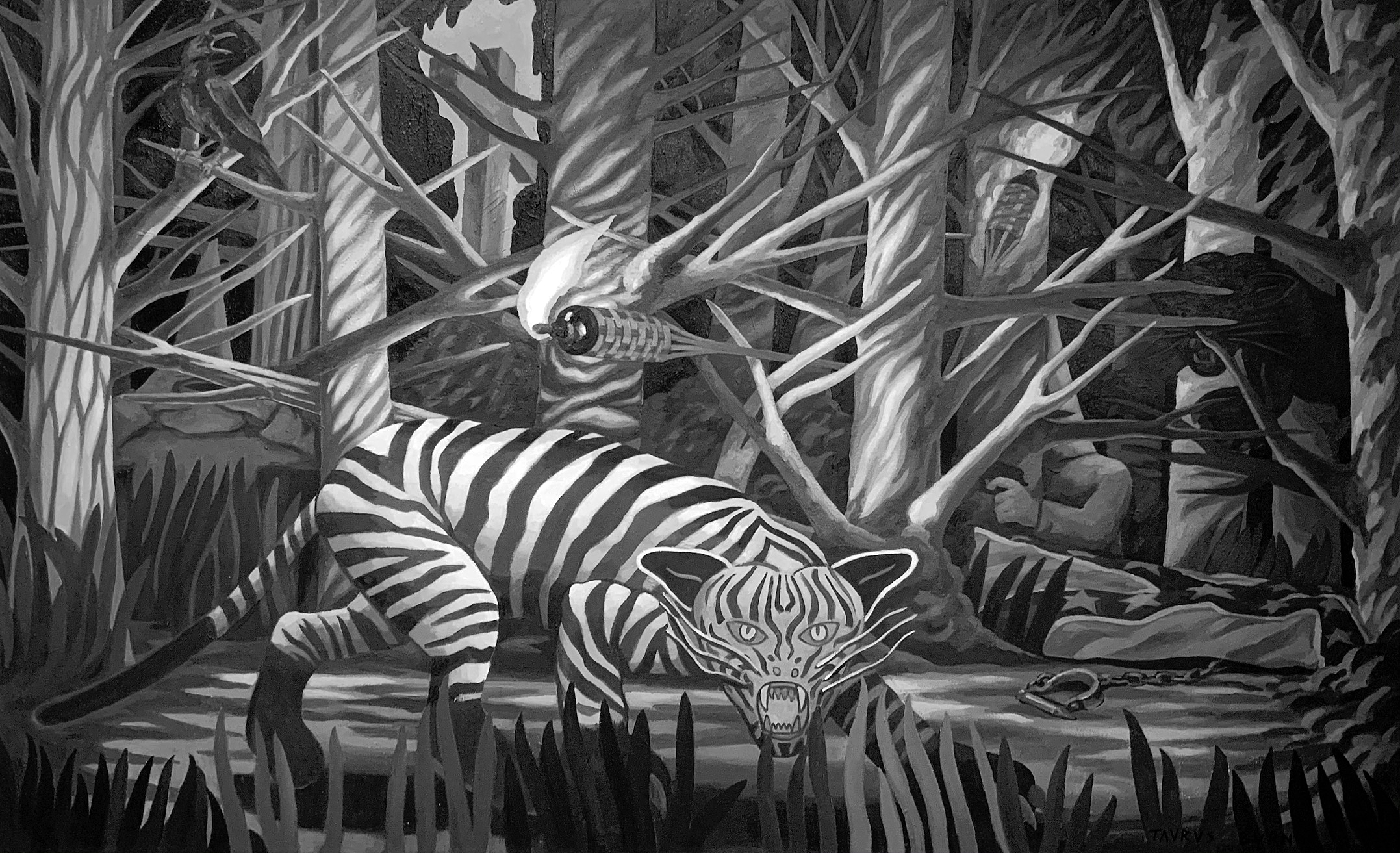 Taurus Burns, The Hunt For Equality, oil on canvas 48” x 72” Image courtesy of the artist

Straight out of a nightmare comes The Hunt For Equality by Taurus Burns. Wickedly spiked branches trap a fantastical half-human creature while its hunters lurk in the shadows behind the twisted bark of complicit trees. The black and white palette fosters a scenario where present danger is felt, but not clearly seen. Under a draped confederate flag, a manacle and chain waits for its captive. A cross burning behind ghostly, pointed white hoods easily identifies the assailants. A harbinger crow warns from a branch high above as a modern-day lynch mob torch strikes down.

Burns interprets, “With this piece I wanted to capture the feeling of being hunted because of the color of your skin, while depicting the challenge of navigating America’s often polarized landscape as someone who is biracial. The panther here is inspired by both the Black Panther Party and the White Panther Party, both of which fought for Black empowerment against systemic racism. This panther wears the stripes of a zebra- a term sometimes used to describe children who have one black and one white parent. Tiki torches recall the “Unite the Right” rally in 2017 where supporters of the rising white nationalist movement gathered together in a show of strength, and Heather Heyer was killed when one of them drove his car into a crowd of people protesting the rally.” 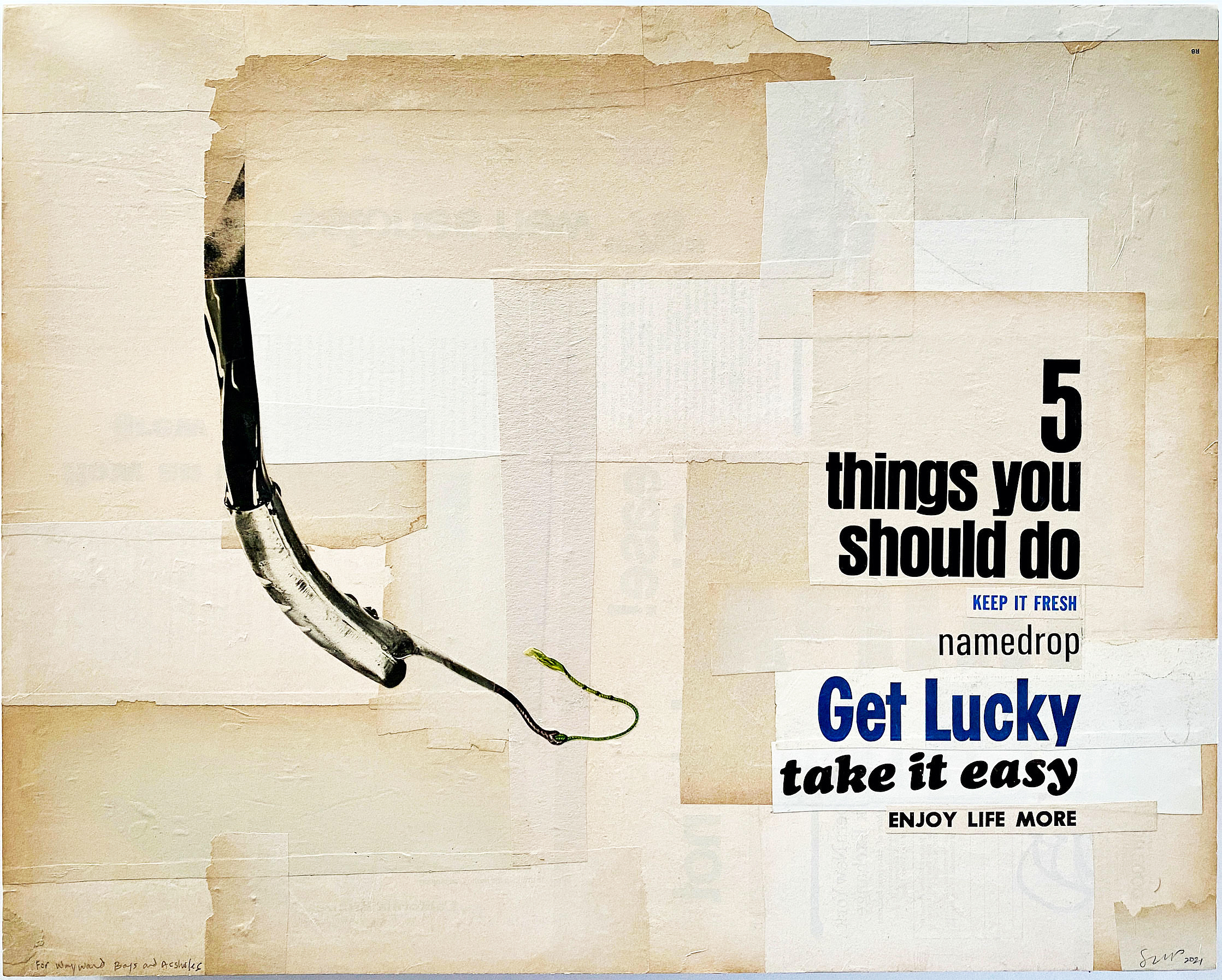 Scott Northrup communicates his always personal message in a quiet, but bold way that asks the viewer to slow down and pay attention to the details. The reductive techniques he’s honed through sculpture, printmaking and film narrows the focus to content. For Wayward Boys and Assholes he’s collaged three pieces of paper including a scrap of a photo printed across the fold of a magazine page. The assembled image is an upside-down oil can spilling its contents and embellished with a green tassel tip from an illustration of a whip. Cloaked in Northrup’s trademark snark is ruthlessly honest dialogue. He openly flirts with the viewer, teasing a response from a shy grin to an audible chuckle. He is the master of calling out well-guarded secrets. 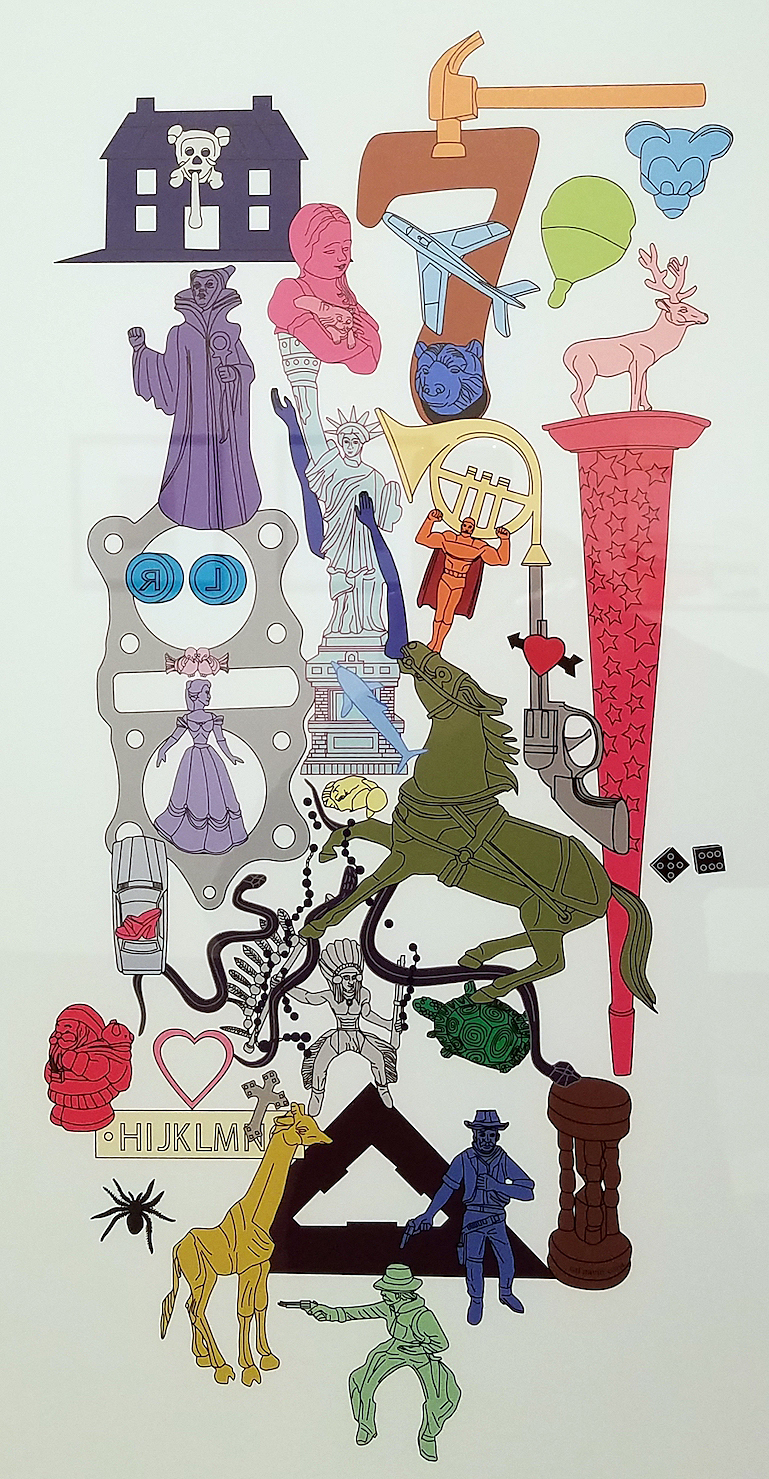 Cal Navin’s Liberty I spills a toybox onto the page inviting us to remember childhood afternoons immersed in enchanted landscapes and adventures with mystical friends. The series began with 3D images of nostalgic toys as a way to mourn her dearly departed brother; toys they had played with, things that reminded her of him. She translated those images into layered digital drawings to tell her story. Her imagery and palette convey playful delight. Navin creates her imaginative characters with love, kindness and a whimsy most of us set aside long ago. Her reminiscence indulges the relationship the random playthings have with each other and our formative creativity. 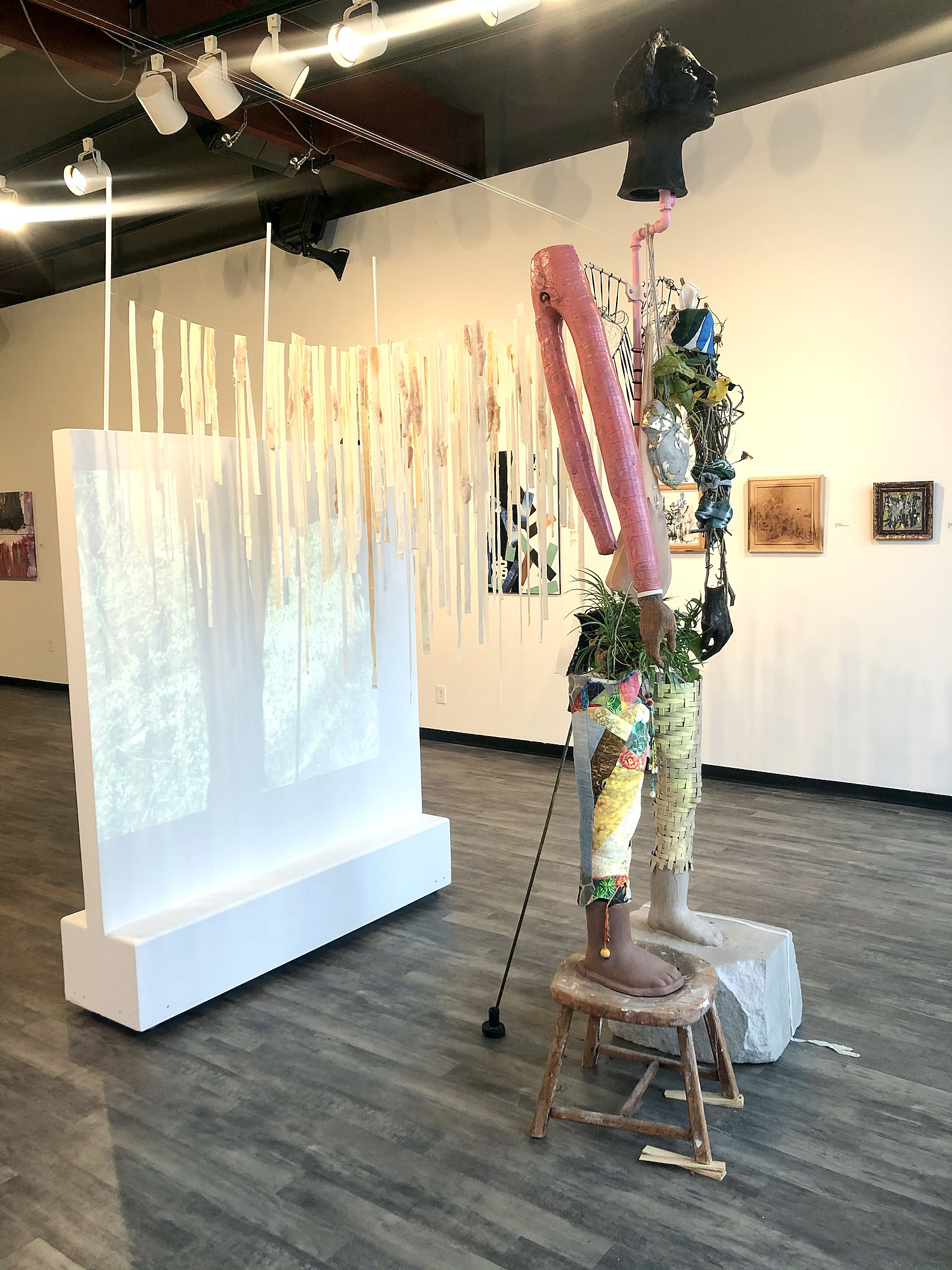 Installed in the east end of the gallery is a loosely constructed but recognizable figure comprised from a cacophony of materials. Ari is a collaborative project orchestrated by Chido Johnson. He began by carving a left foot in stone, then invited sixteen artists to join him imagining a body. Halima Cassells contributed a cement cast heart embedded with her sister’s and grandmother’s jewelry representing family combined with plants depicting life itself. Graem Whyte attached a left arm, which he’d had for thirty years patiently waiting for a body. Floating, dripping scraps of translucent material cast using her own fingers, Lisa Tolstyka provides a transitional element through “touch”.

Living in the midst of Covid, each artist came into the installation space independently adding their contribution to Ari’s body. They recorded their experience with the body, which they shared online to be witnessed through a digital window to the public. In the tradition of an exquisite corpse, a method by which a collection of words or images is collectively assembled. they did not know what Ari would become. Although working in isolation, they called each other to better understand how they physically connected and functioned together. This in itself reflects the time we live in.

Since the exhibition’s cohesive thread is the artists themselves—when and where they were working during a particular period—the work is as varied as they are. Genres range from photographic collage, found object sculpture, abstract painting and loosely painted street scenes. Themes run the gamut from intense social commentary to pointed sarcasm. What is on display here is not only the freedom and brilliance of a simpler period but artists devoted to their practice with passionate support for each other and their community.