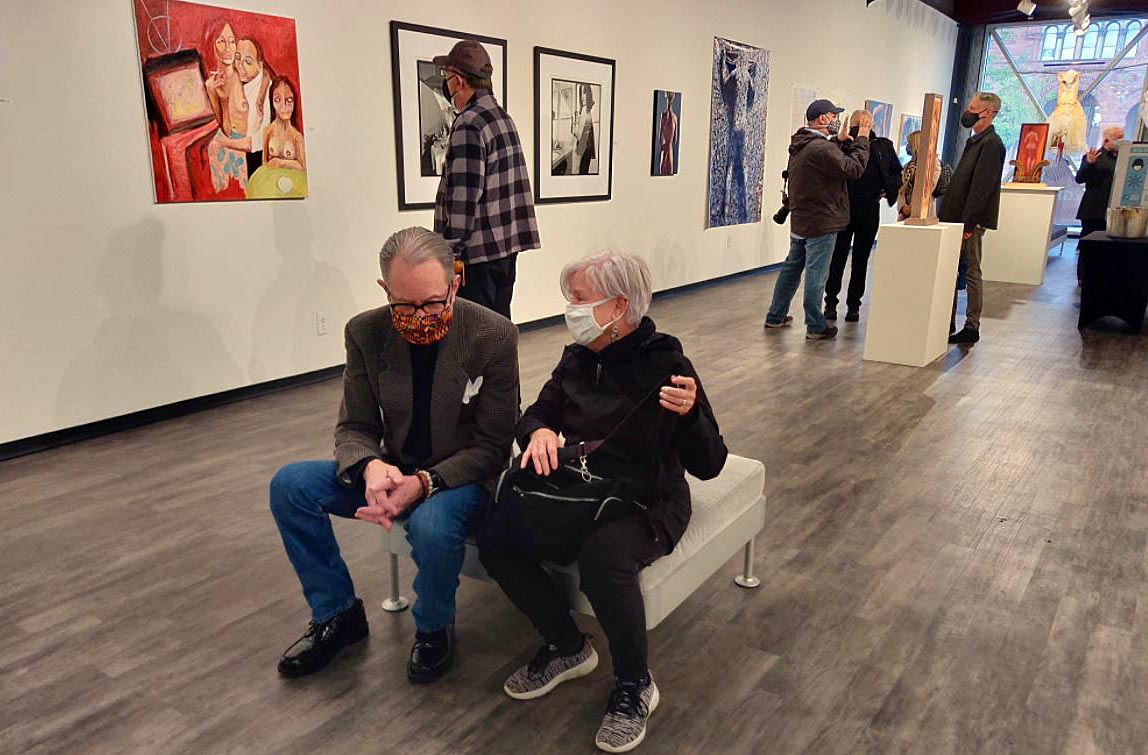 ¿GENDƎR? is an exhibition of how artists depict gender, using their own thoughts and experiences. Some explore outdated gender stereotypes, roles, and sexuality while others confront societal norms. In the 21st century, the idea of gender has had many reformations, and the new lexicon reflects that: cisgender, binary, non-binary, gender fluid, androgyny, transgender, and gender pronouns. The show is but a glimpse into the myriad of possibilities. Curator Gary Eleinko invited artists, who regularly employ the figure in their narratives, to select works that calibrate perception toward the varied facets of gender. 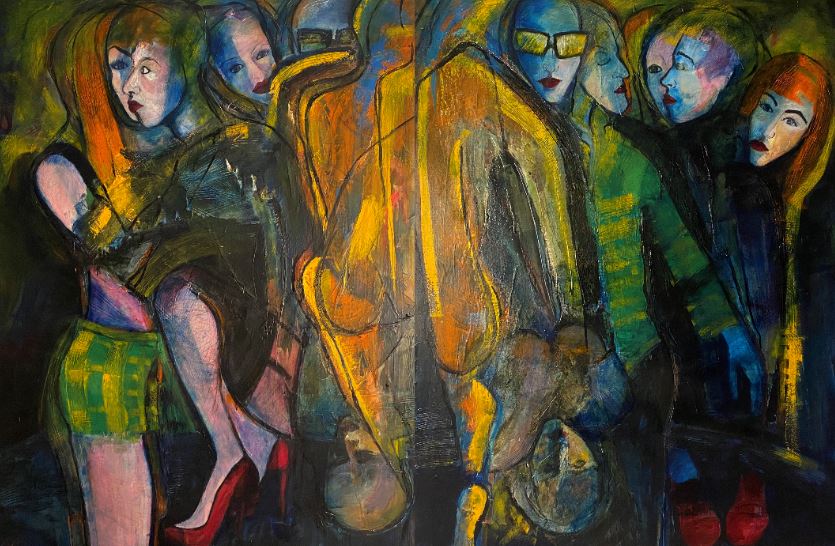 Miroslawa Sztuczka’s figurative diptych Under The Skin describes a gender spectrum through its striking palette in thickly applied expressive strokes. Those charged marks afford a noticeable contrast to the smoothness of the faces. The melee of figures are arranged in what reads like a glamourous party complete with fame hiding behind sunglasses. The left side of this piece contains those who identify as feminine, recognizable through the generally accepted symbolism of heeled red pumps accessorizing bare legs. To the right, pants resting on flat red shoes are cast as the masculine inverse. Humanity meets in the center blending into the gender fluid, agender and non-binary spectrum. The bold yellow figure exuberantly breaks free from social confines leaving the two mysterious figures at the bottom, symbolizing the constrained concept of binary man/woman only, to be squashed by the liberated throng. 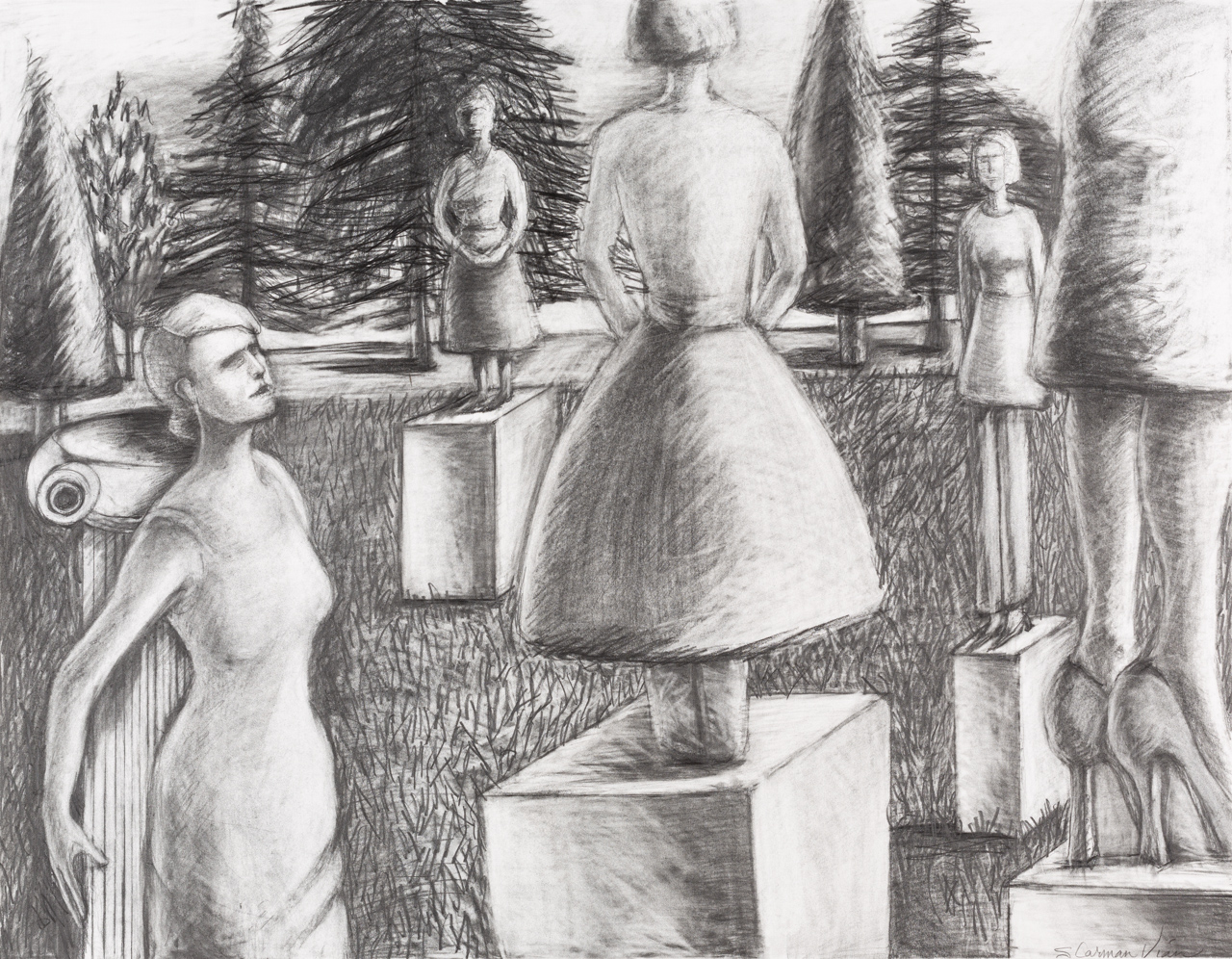 Monumental statues of men presented in commanding poses advertising their power and achievements litter parks and public places. The glaring absence of legions of accomplished women yet to be immortalized in a similar manner is the subject of Sue Carman-Vian’s Women At Their Heights. Carman-Vian’s creatively nimble mind imagines a park elevating these uncounted women to their long denied status. The viewer is reminded of a woman’s long-standing relegated role of sexual appeal via high heels while the woman’s placement on a pedestal indicates the importance of one’s social and intellectual accomplishments. This imagery presented in graphite renders the scene dreamlike yet does not wilt. The strong narrative isn’t distracted by the pull of color. Fine detail executed by the direct hand of the artist makes this a very personal epistle. 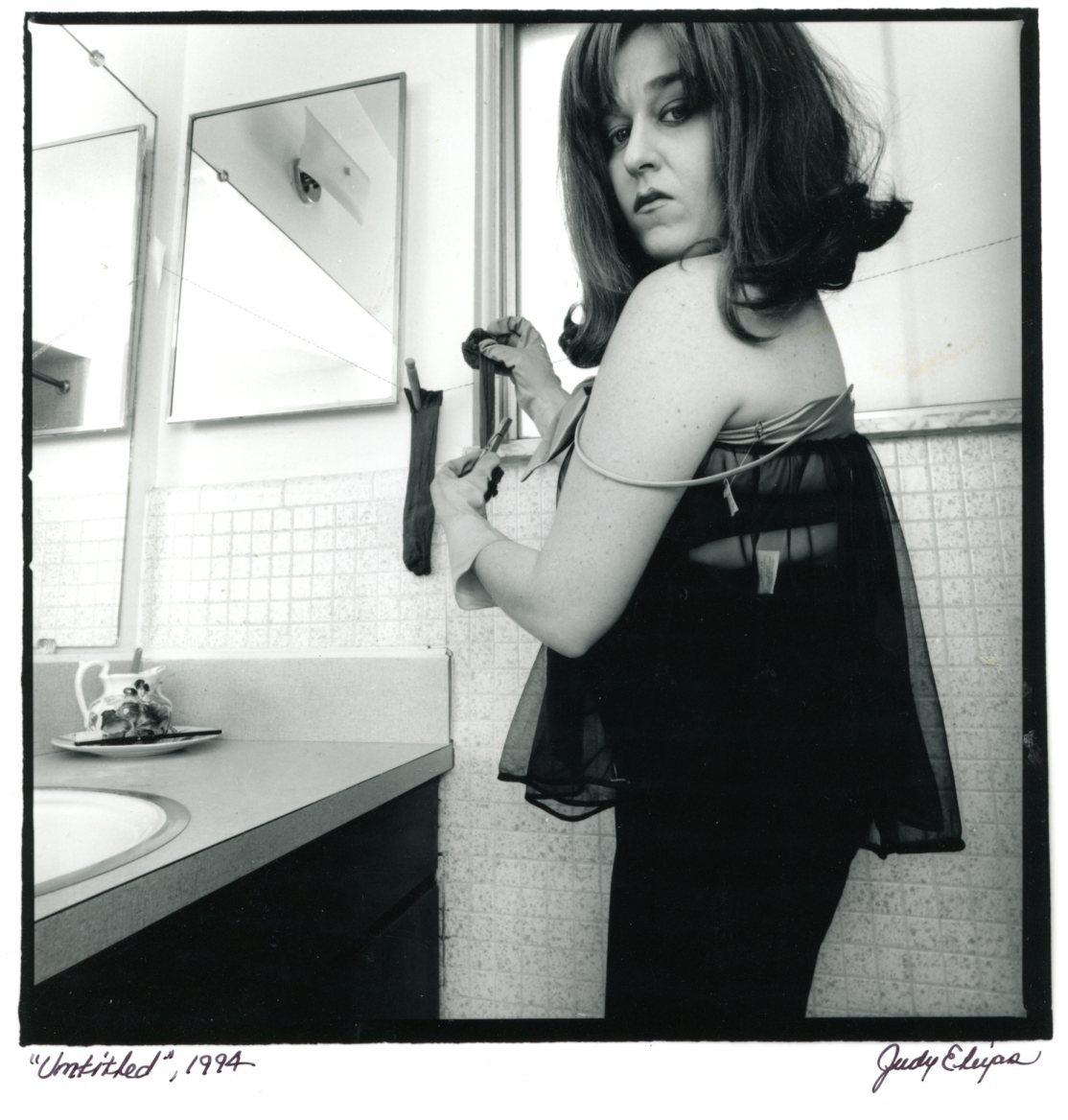 Judy Eliyas addresses female roles with a  similar sensibility to Carman-Vian’s, though uses the medium of black and white photography to communicate her story. In Untitled (Woman Hanging Stockings In The Bathroom), Eliyas inserts herself into staged domesticity with a slice of humor by including the viewer who has ambushed the now annoyed subject in a private moment. Eliyas’ images harken to a softer Cindy Sherman-like genre in her autobiographical scenes. The absence of color combined with selected settings and costuming make these images feel dated yet they tackle very contemporary constructs. 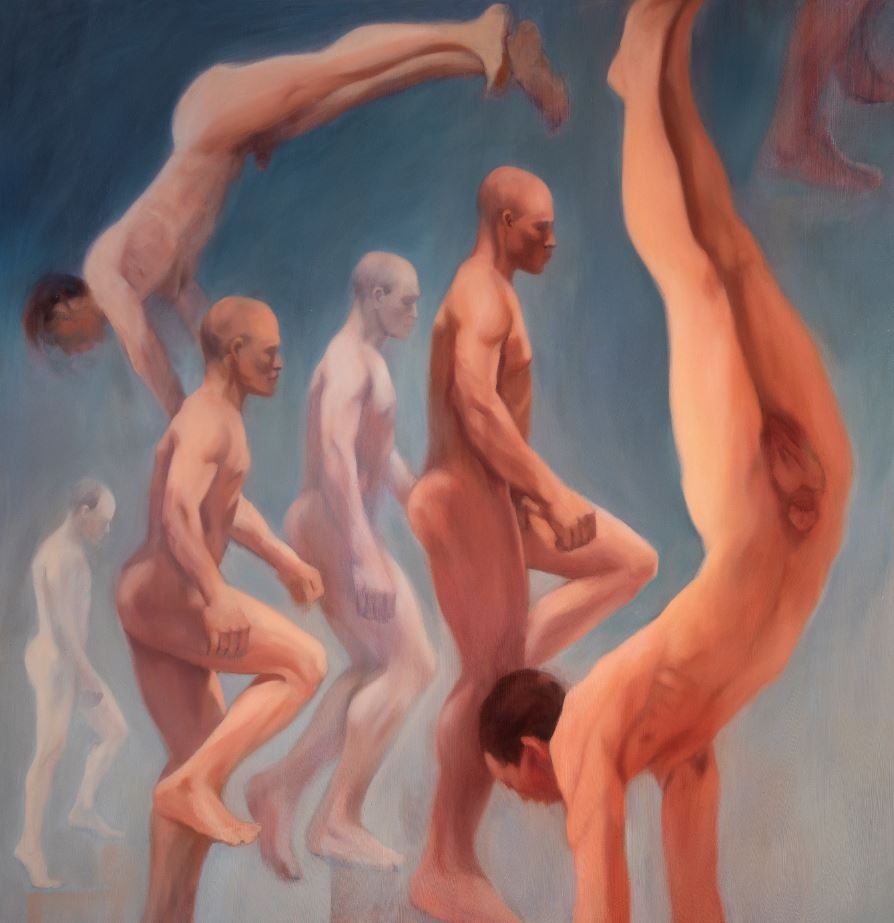 Upon initial glance, E-Male is a bit of a compositional jumble. Traditional portraiture tends to a solitary figure relaxing in the center of the canvas; a sleepy gaze fixed somewhere out of the picture’s range. In this painting, Claudia Shepard has defied convention by drawing on the pioneering photography of Eadweard Muybridge to give us a body in motion. There is a discernible evolution-of-man sequence, representing the progression of the masculine and its changing perceptions. The circle is completed by adding leaping figures illustrating progressive thinking and interpretation of what it means to be male. This includes representation in the nude portrait genre, where the ubiquitous female form has dominated for centuries due to archaic concepts of beauty. 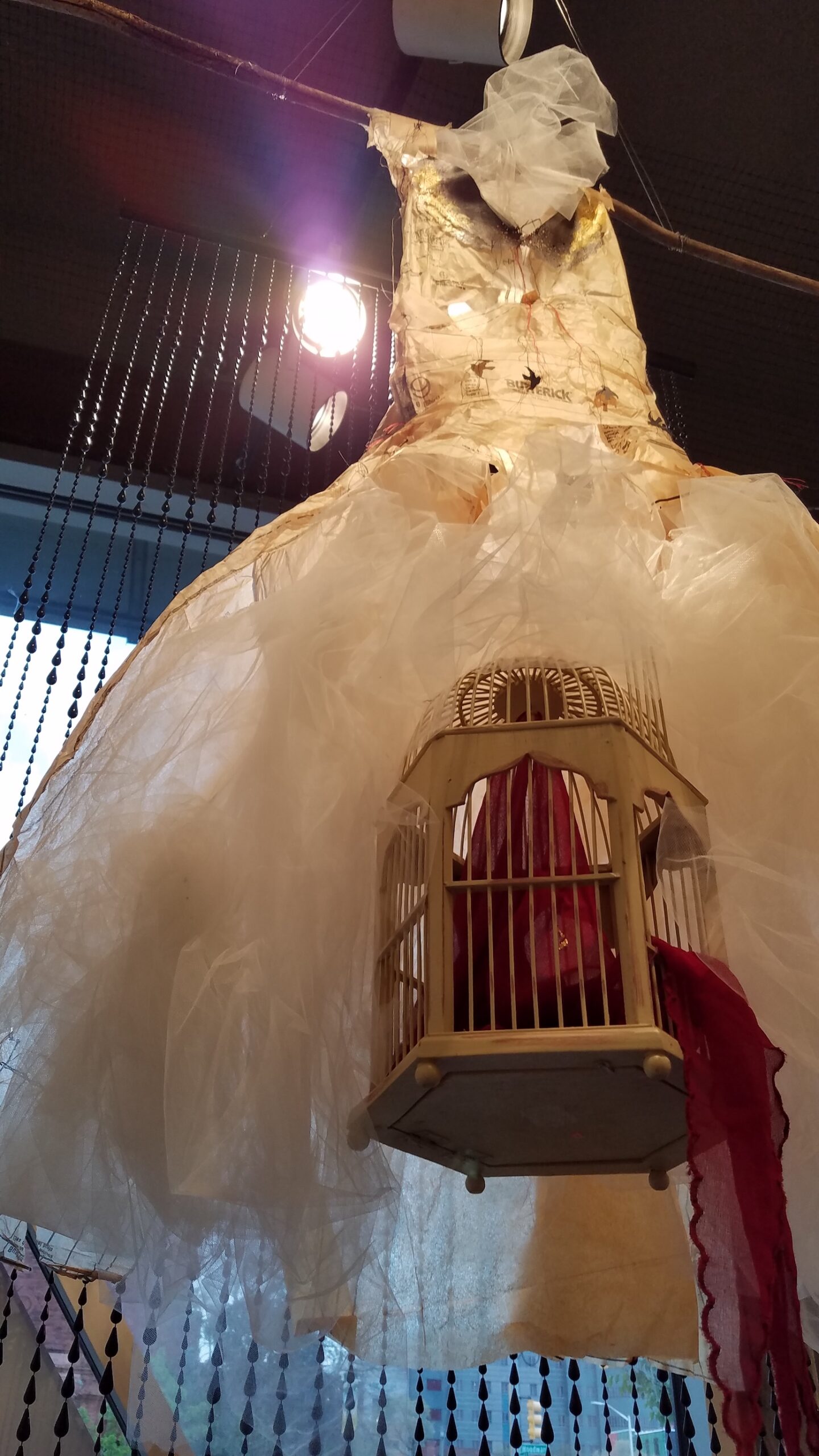 Sabrina Nelson addresses the figure through what it wears, offering clues to a person’s identity while doubling as personal armor. When choosing to represent the feminine through wardrobe, the dress is a garment that universally registers as female energy. You Ain’t Never Gonna Fly employs fragile patterned tissue paper to illustrate human vulnerability as well as the skin itself. It looks good but can be torn easily. The birdcage represents the womb embellished with a ribbon of crimson hemorrhage. This imagery is significant in that only those who were born female possess a womb with the ability to gestate life. Nelson chooses to suspend her dress aloft, suggesting our self-identity and value precariously dangle on a delicate thin string. At a distance, Nelson’s dresses float and flatter. Upon closer inspection, the complications of negotiating one’s life is woven into the seams and imprinted on the skin.

This show makes a concerted effort to represent the multitude of voices in the gender conversation. A captivating self-portrait by Darryl DeAngelo Terrell remarks on a transgender experience. A thoughtful, fata morgana image by Feather Chiaverini portrays a non-binary account. John Hegarty delivers more traditional but harshly realistic portraiture. These works visually chronicle a sliver of a complex and evolving narrative on who we are as humans, revealing the beauty, tenderness, fragility and brutality that comes with embracing diversity. Many different flowers make up a bouquet. “Our ability to reach unity in diversity will be the beauty and the test of our civilization.” -Mahatma Ghandi.