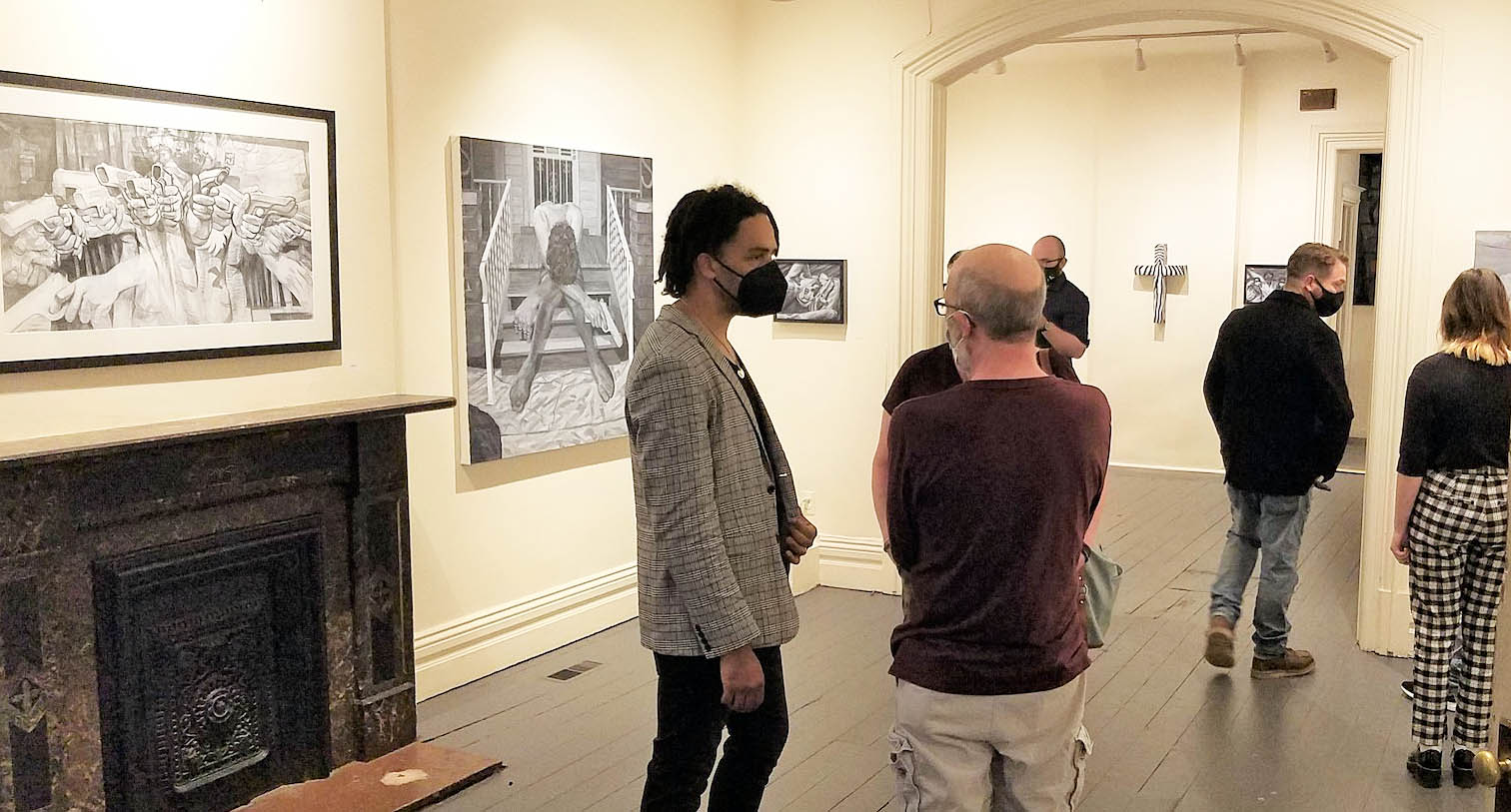 The recently reopened Detroit Contemporary, now located at 487 West Alexandrine in Midtown Detroit, presents new work by Taurus Burns in Defensive. Taurus Burns’ primary focus is on figurative realism and the influence of race, politics, and history on the self, family, and community. His autobiographical scenes describe systematic racism through the use of portraiture, anthropomorphism, and allegory. The black and white palette was chosen to represent Burns’ biracial heritage and a distinctively divisive world view resulting from society’s relentless subjugating treatment of the Black race. In this exhibition, Burns explores his personal experiences and struggle to get through that oppressive societal wall. 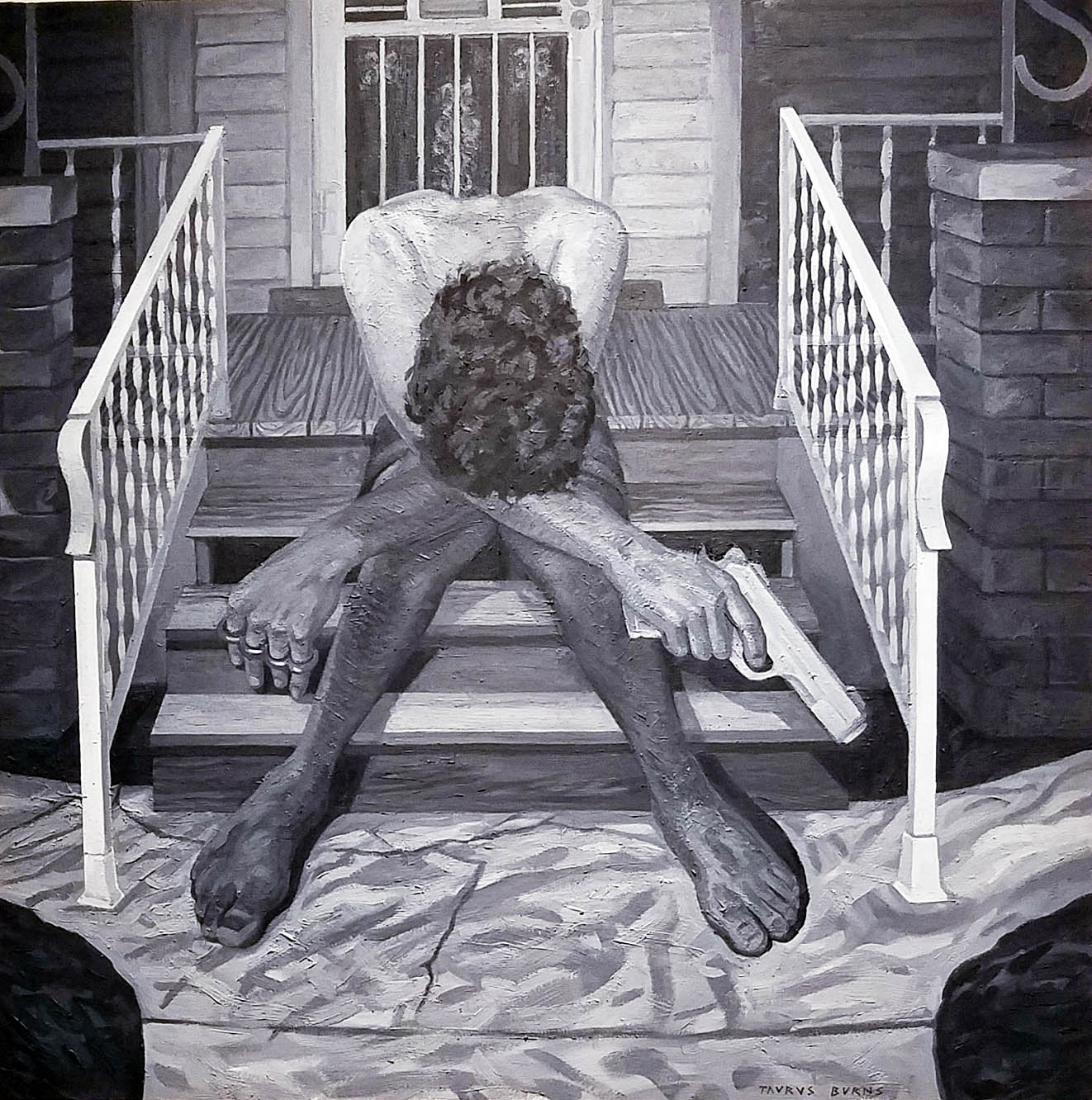 Burns was 17 and had just graduated from high school when Rodney King was brutally beaten. Shortly after, the LA riots ignited when a jury acquitted four police officers for the use of excessive force during the arrest of King. As a young biracial man lacking enough life experience and wisdom to fully process these incidents, they were mentally stored until the events of last summer erupted to bring them back to the fore. The Graduate begins to unpack the terror and trauma of what happened in Burns’ youth. In a snapshot, he describes utter hopelessness while an apparent necessity for self-defense takes root. Attention to detail, such as right-handed brass knuckles and a metal railing painted in perfectly executed perspective, allows the viewer to meditate on this life-altering account. 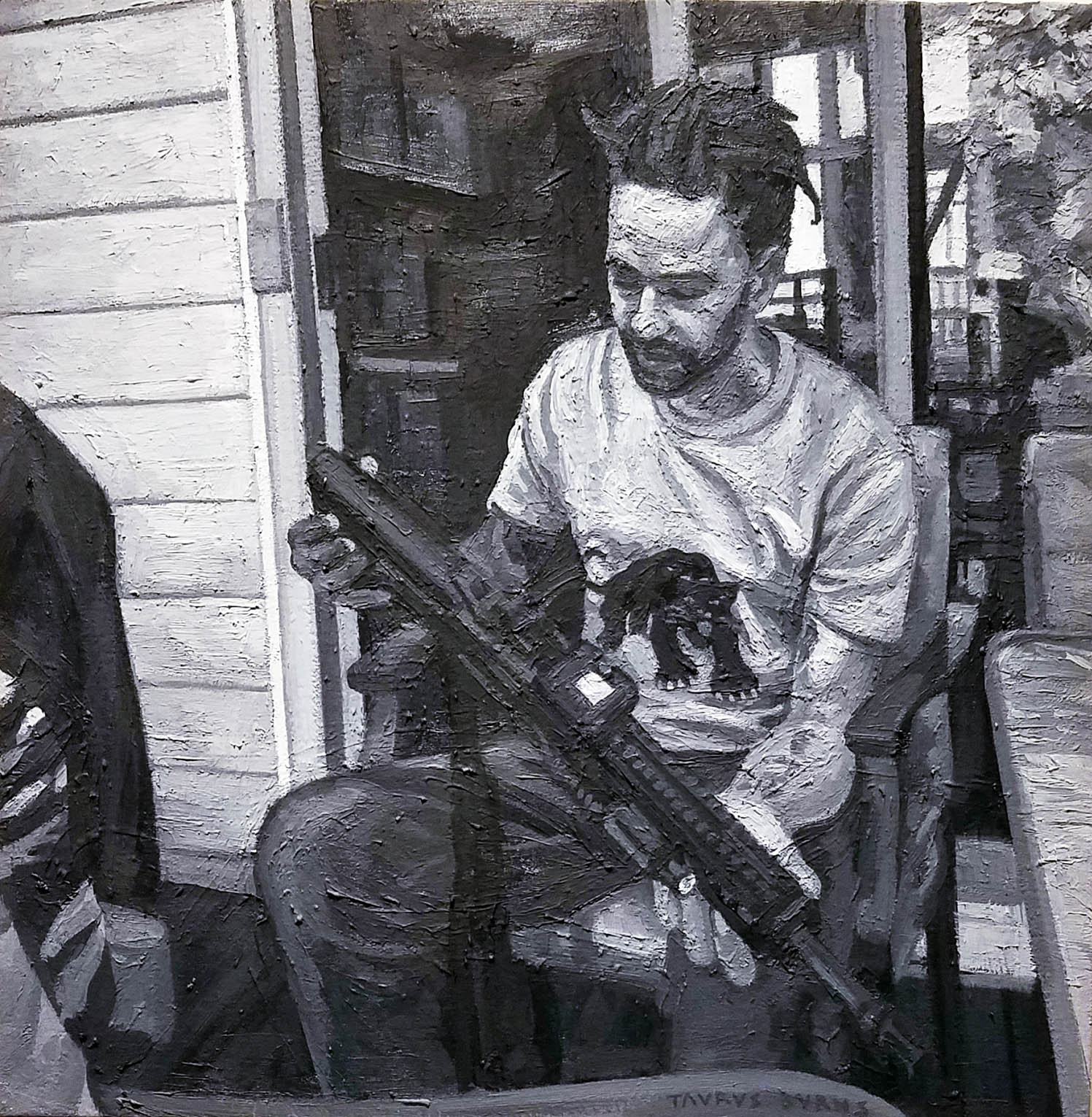 Taurus Burns, The Panther in Me II 22×22 oil on canvas

Burns has been using the panther image, inspired by the Black Panther Party, in recent works. Burns often paints his panther wearing the stripes of a zebra—a term sometimes used to describe children who have one black and one white parent. The Black Panther Party practiced open carry armed citizens’ patrols, or colloquially “cop-watching”, to monitor the behavior of the Oakland Police Department officers and challenge police brutality in the city. The Panther in Me II is heavily textured in thick layers of paint. The reflections in the sliding glass doors are so well rendered that the viewer sees the front yard and a glimpse of shelving and pictures inside the house. The panther icon is subtly placed on a T-shirt while the subject examines a rifle, preparing himself, mentally as much as physically, to protect himself and his home. 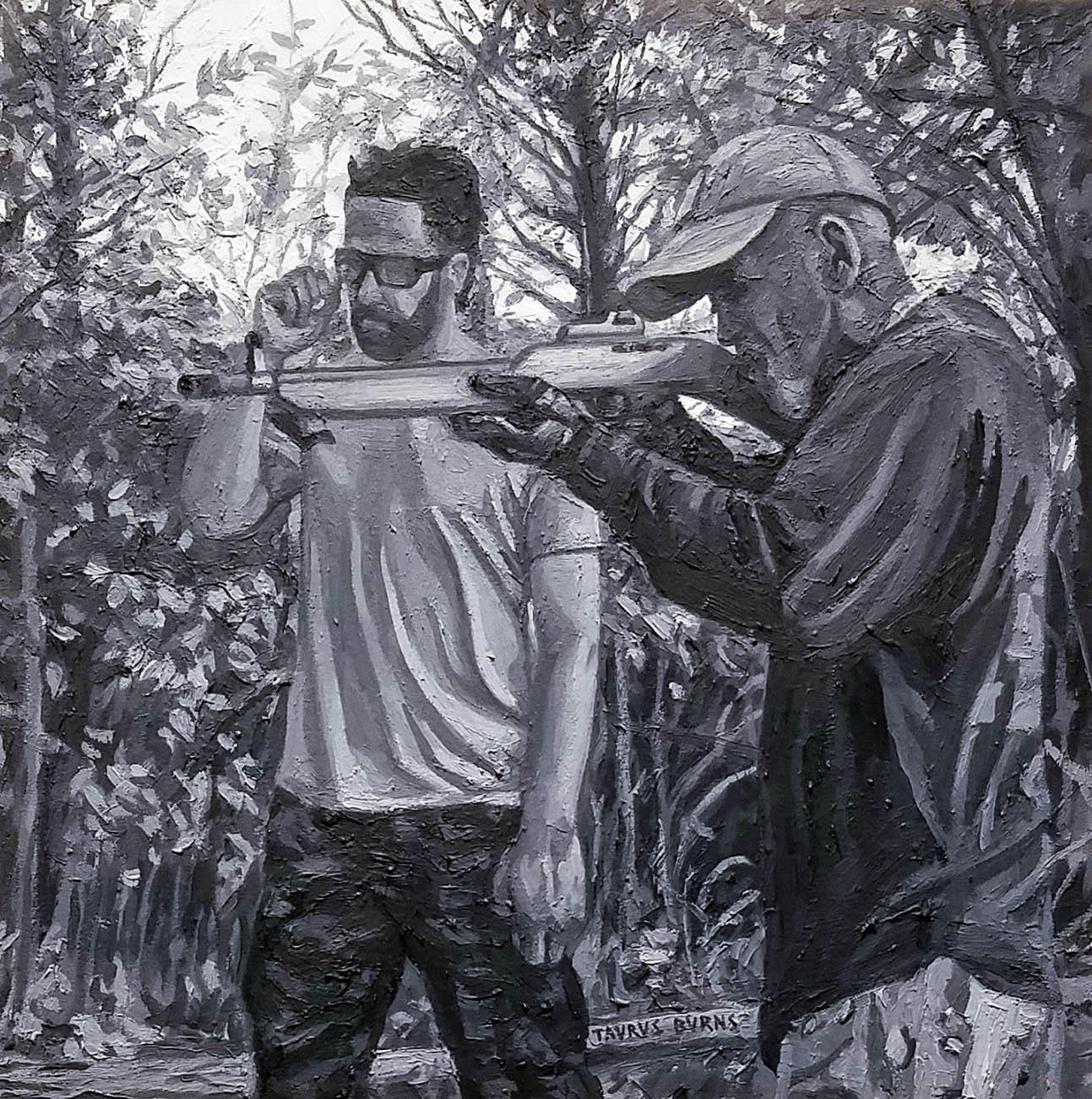 In Training Day II, one generation passes down knowledge and wisdom for responsible gun ownership to the next; the teacher concentrates while the student pays close attention. The thin silhouette of the baseball cap on the older man’s head and the bend in its bill creates a visually tangible object while the wearer’s greying beard indicates he’s the elder of the two practitioners. Since these pictures are monochromatic, the use of shadow and light is critical to effectively communicate the subject and the space it occupies. 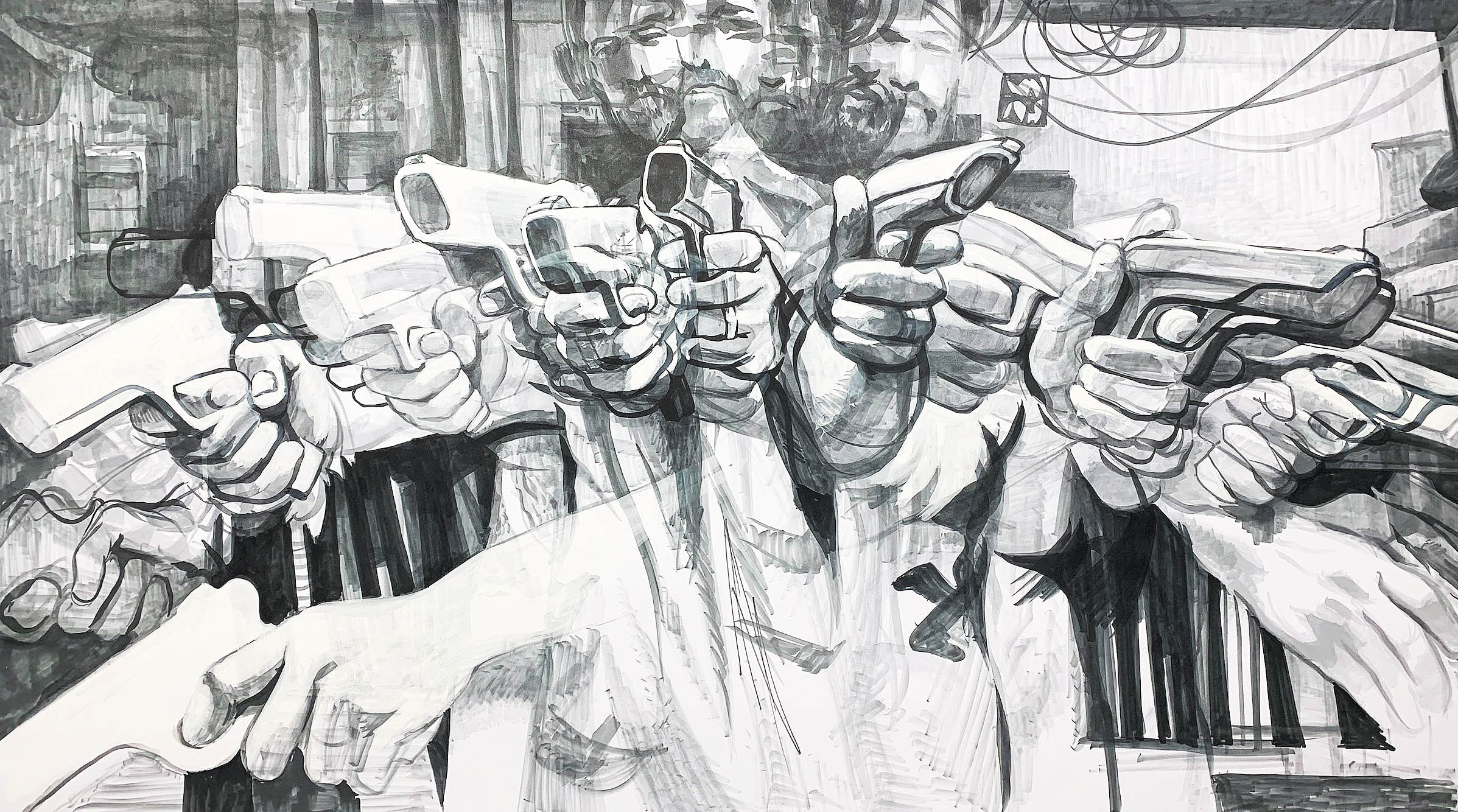 Triggered’s double entendre fires both bullets and trauma in quick succession. This piece moves, the shots rolling across the paper. Ink and gouache’s light touch reveals the artist’s hand at work. The stop-action sequencing suggests the shooter is following a moving target. The work appears unfinished yet effortlessly delivers its warning. 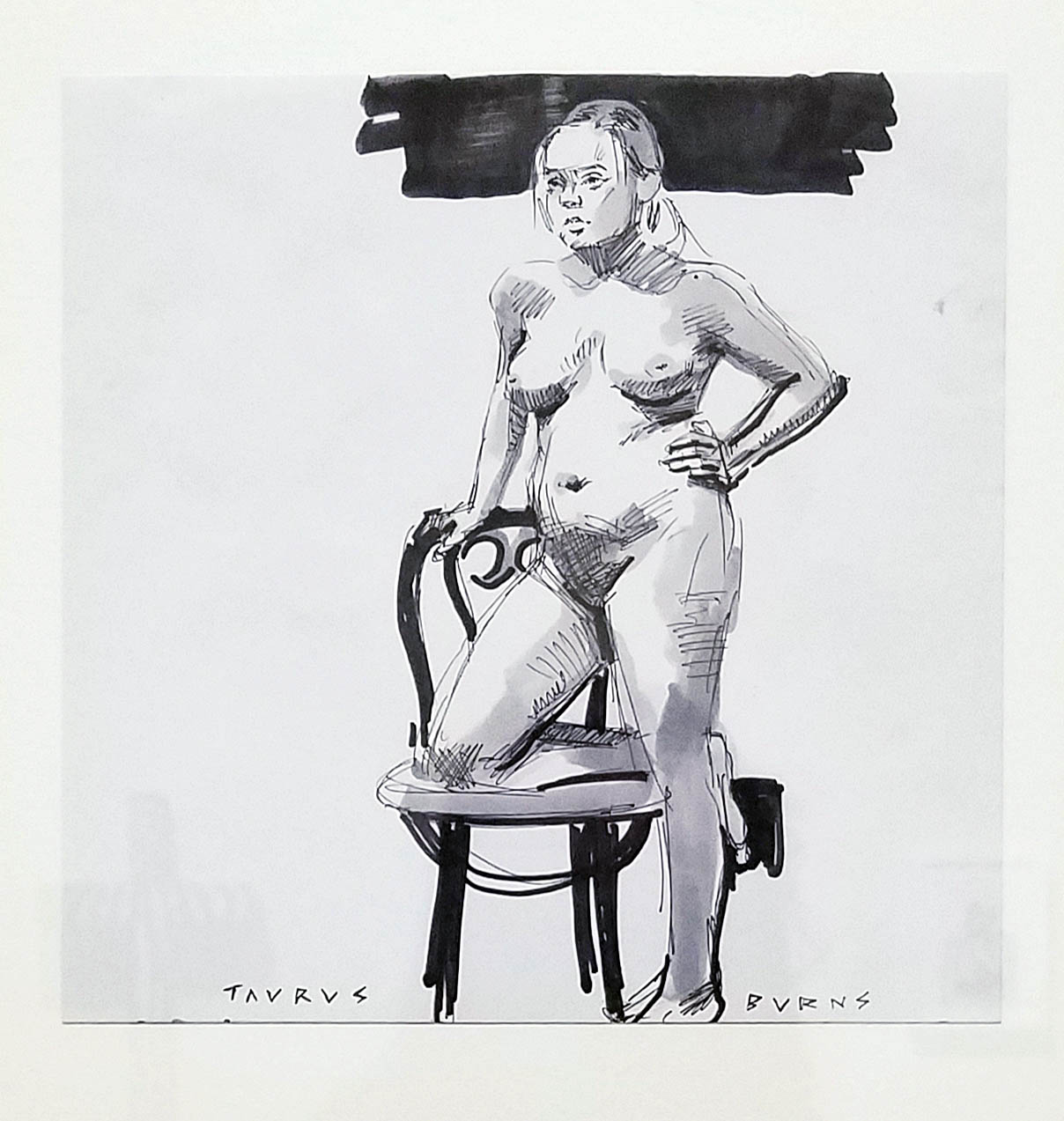 The figurative studies are lovely in that they afford a window into how Burns works. With very little material, gestural lines with a quick wash of shadow demonstrate the artist’s skill. The figure is in perfect proportion, gently resting her knee on the chair. A swipe of black behind her head grounds the space. The finished artwork is the culmination of years of study and practice. Figurative being one of the most complicated subjects to render well, these drawings indicate Burns is in command of his subject.

George Floyd’s murder was the flashpoint for all of the weight Burns has carried since The Graduate. Nick Cave is another Detroit artist who was moved to action by the Rodney King incident creating his first Soundsuit to hide a person’s physical appearance to escape judgment and the subsequent physical and/or verbal assault. Walking through life trying to at once hide yet defend your intrinsic right to not only exist but flourish is exhausting, maddening. Burns’ current work is polished and refined, thick and expressive. Burns has perfected his narrative and become a masterful storyteller. 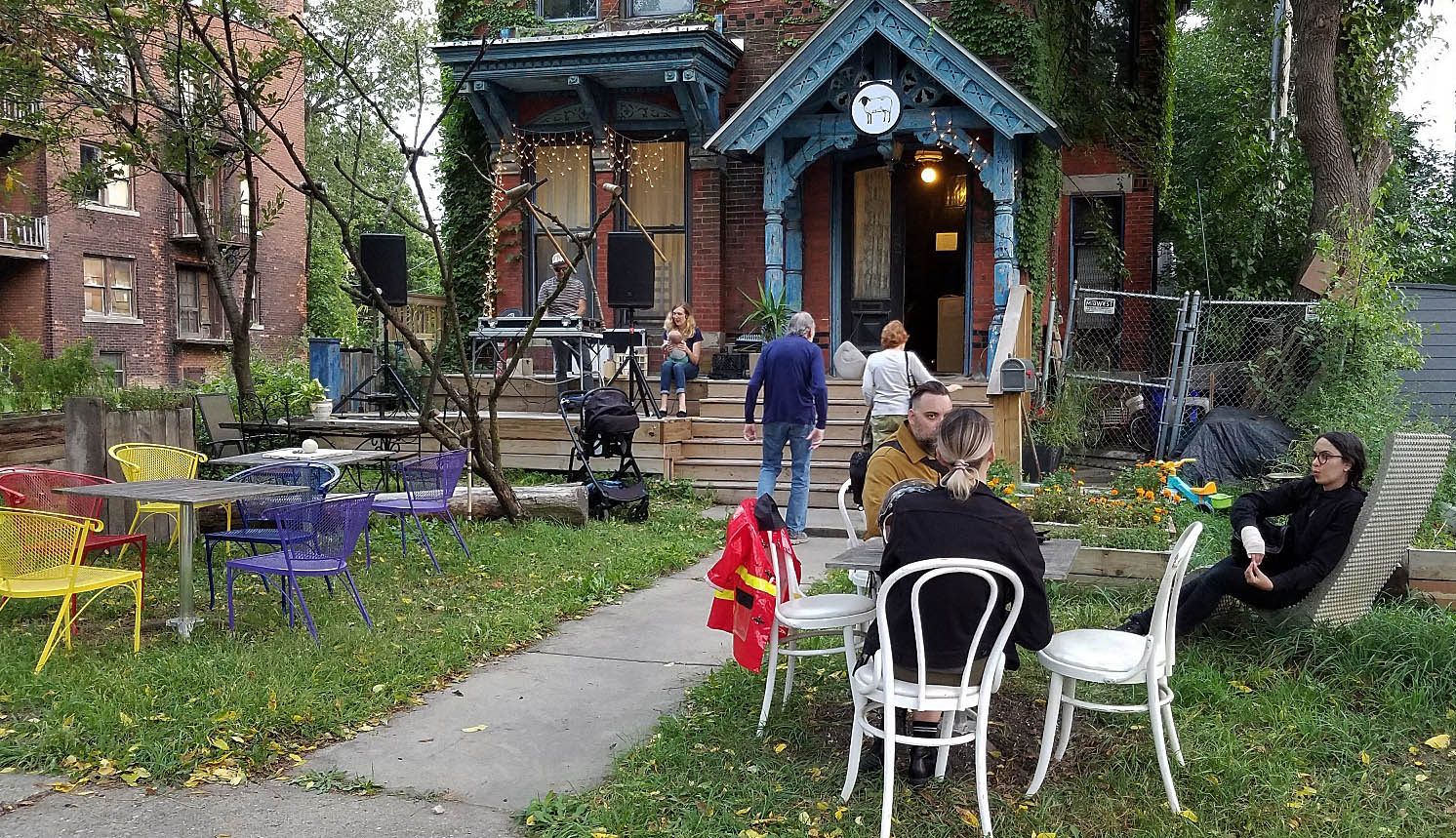 After an immersion into theater production and socially conscious endeavors, Aaron Timlin and Detroit Contemporary return, installed in a gorgeous indigenous house in the heart of Midtown Detroit. He’s put together his opening season with artists he’s known and respected for years: Diana Alva exhibited in August, currently showing Taurus Burns, followed by Clinton Snider in October, Ray Katz takes over in November, and fan-favorite the Biennial Actual Size Show is on for December. The gallery is on the first floor of this architectural gem, with plans for theater and multi-media pursuits coming soon to the second floor. This new space is set to be a hive of creative thinking, making, and exhibiting.

As Detroit, and the rest of the country, regains consciousness from not only the pandemic but our collective societal impact on both the physical and mental health of our communities, these two innovators don’t just talk about change. They make it happen.