Duplicity from Without and Within: Molly Soda, Sheida Soleimani, Sofia Szamosi, and Dessislava Terzieva 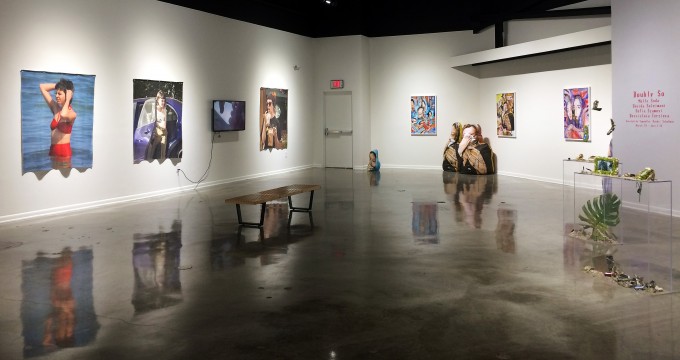 Installation Image – “Doubly So” All Images Courtesy of Clara DeGalan

“Doubly So,” an exhibition conceived and curated by Samantha ‘Banks’ Schefman of Playground Detroit, that opened last Friday at Center Galleries at Detroit’s College for Creative Studies, features four up and coming artists exploring identity within social media from a (surprisingly illusive) outside perspective. The four engage with what builds an identity in the age of social media which, essentially, comprises being constantly seen, and our conflicted desires both for privacy (another increasingly illusive phenomenon) and for maximum exposure. That frisson between a desire for and retreat from exposure is grappled with most tellingly in the work of two of the artists, Molly Soda, and Sofia Szamosi. Both primarily feature their own faces and bodies in their work in “Doubly So,” and the impression is that they are objectifying themselves in an aim to draw discourse of the exhibitionism of the female body in popular culture back into the hands of women. 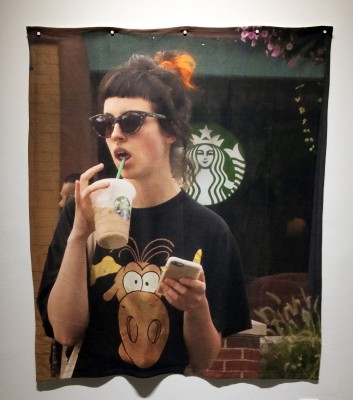 This practice has been pretty widespread in women’s art since the 1970’s (Szamosi’s archive of selfies strongly reference Hannah Wilke’s photographic self-portraits in content and form, and her film “Tarred and Feathered” channels the visceral imagery of the Abjectionist movement.)

In “Doubly So,” Szamosi’s identity unpacking feels a bit outdated at first look- the knee-jerk response is that this argument has already been made, again and again, and is past its vital currency. However, it still possesses the power to unsettle. Moving along Szamosi’s selfie chronology, taken in photo booths between 2005 and 2015, I couldn’t tell whether I was tired of seeing her body or jealous of its beauty. This uncertain response that wells up in me pretty much every time I am confronted with such work is a clue that our relationship with depictions of the female body, even by other females, is far from liberated or resolved. 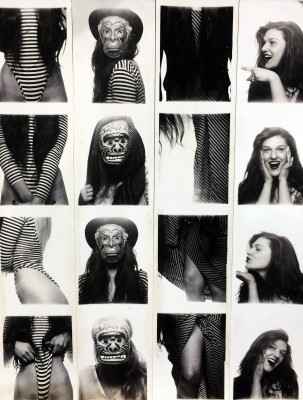 Molly Soda has gained critical acclaim for her work in and about social media, and she plays with its tropes really cleverly. Her website (mollysoda.biz) is hilarious- for a moment you truly fear you’ve stumbled onto a bit of porn-saturated malware that is going to eat your computer alive, tiny gyrating women and pixilated graphics abounding. Her work in “Doubly So” follows Szamosi’s in winking exhibitionism that seeks to subvert assumptions about the exposure of women in social media. Soda poses as various celebrities caught in paparazzi shots as they fill parking meters, climb out of cars, pause for an ill-fated moment of unselfconsciousness while wading in the ocean.

There is an interesting commentary here on the scorn heaped upon these women for daring to appear in public in an un-camera-ready state. The large-scale portraits are printed on fleece blankets in a nod to commemorative kitsch- and perhaps a suggestion that we draw comfort from the exposed humanity of these pop culture goddesses. But should we? Are these images not as objectifying and offensive as the idealized, photo shopped guises we are used to seeing celebrities in? Soda’s work in “Doubly So” left me with a grim suspicion that autonomy of image in social media still alludes women, and it’s a problem we are going to have to spend a few more decades thinking our way around.

Soleimani and Terzieva, by contrast, do not place their likenesses into their work in “Doubly So,” which creates a wholly different dialog with identity’s plight in social media. So much of our engagement with the online world revolves around the persona we create for ourselves there, it’s easy to forget what that world is doing outside of our identity-building enterprise, and how the signals we receive (and do not receive) from it are informing or misleading us. Terzieva’s sprawling installation of twining USB cords, false flowers, and technological baubles in various states of decay comments on the mounds of obsolescence we leave in our wake in our hunger for ever swifter, sexier, newer conduits. Her sculptures of moss-coated smartphones embedded in piles of organic material are beautiful, and could have stood on their own without the prefabricated environment installed around them, which becomes a bit distracting. Terzieva’s best sculptures have old-school magnifying glasses affixed to them, through which one sees these objects blown up into delicate terrarium-like landscapes, in which the cell phone becomes strangely monolithic, or dissolves altogether into glittering shells and pebbles. 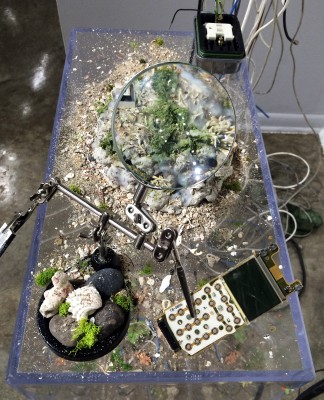 Soleimani’s work, bright and bubbly though its surfaces are, instantly grounds this digital universe in the grimmest of real calamities. Her series of archival pigment prints, and their accompanying soft sculptures, present portraits of Iranian women who have been publicly executed for what the governing regime in Iran defines as crimes, such as defending themselves from rape. Voices of dissent under a totalitarian government are rapidly squelched- the freedom with which we share our political beliefs on Facebook, and other social media is as much taken for granted in the United States as is the objectification of women’s bodies for worship, derision, or personal affirmation. Soleimani’s work achieves ever refining tension between sensual beauty and hard-hitting political content- her elaborate collages juxtapose brilliant colors and moist glittering surfaces with dismembered body parts and visual fever dream montages of oppression, control, rebellion, and terror. Her work in “Doubly So” tones things down a bit formally, maintaining the bright palette but letting the subjects of her portraits engage the viewer more quietly and directly, with stunned but defiant gazes and wringing, desperate hands. 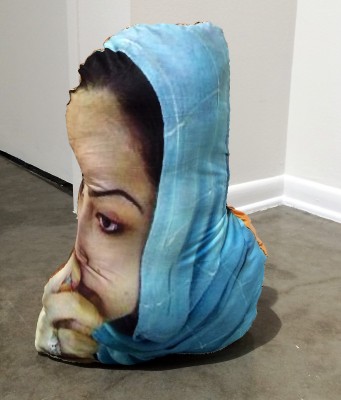 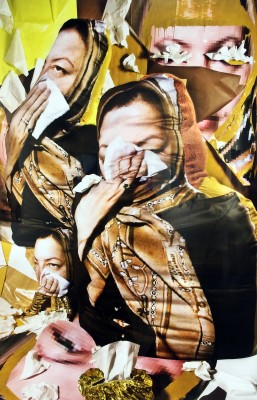 Soleimani’s soft sculpture portraits of these doomed women call to mind a passage from Lewis H. Lapham’s preamble essay to the Spring 2016 issue of Lapham’s Quarterly, the theme of which is “Disaster.” “…( a joint venture of money and machine), the danse macabre surrounding us onscreen reduces human beings to things- broken toys, smashed dollhouse furniture… Too far removed or arriving too late on the scene, the camera doesn’t grasp the human response in the eye of the storm.” The doll-like construction of Soleimani’s sculptures evokes the loss in translation of the real horror of these women’s lives and deaths, glimpsed briefly via digital stream. As the press release for “Doubly So” is careful to note, “Though it has been an ongoing political struggle for American women to fight for gender justice and equality, it pales in comparison to the totalitarian government of Iran that will sentence one to death for speaking up against them on such social media streams as Facebook.” “Doubly So” attempts to find common ground between the struggle for autonomous identity faced by American women and the daily life-and-death struggle Iranian women must undergo, yet, as the press release cannot help but state, the former struggle simply pales when juxtaposed with the latter.

“Doubly So” is on display at Center Galleries at The College for Creative Studies March 19 through April 23, 2016