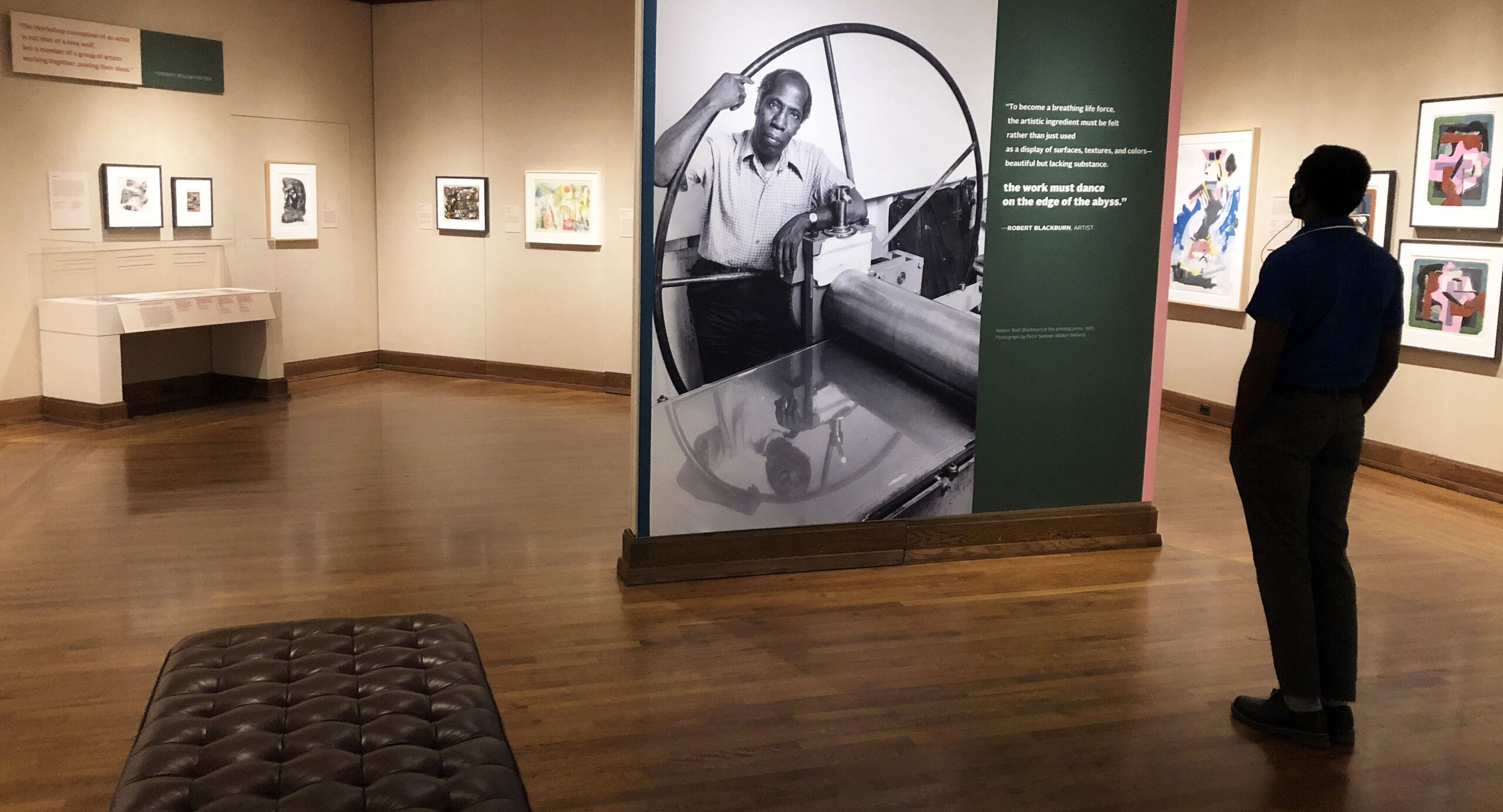 Robert Blackburn and Modern American Printmaking brings together over 75 works of art, from multiple collections, to celebrate and emphasize Blackburn’s unrelenting dedication to a collaborative artistic community and the accessibility of art making to all. The exhibition chronicles Blackburn’s life through visuals and text. Placards strategically placed throughout the exhibit offer breaks between the works and section the pieces based on relevant themes. They also provide visitors a storyline through the exhibit, rather than overwhelming them with a large haphazard grouping of works. At the onset, viewers learn about Blackburn’s beginnings. He was born the child of Jamaican immigrants in Harlem, New York just as the Harlem Renaissance was beginning. New York was also still experiencing the transitional period of the Great Migration, which together brought an influx of Black people who relocated to New York from many other areas of the country.

African American artist Charles Alston was part of the movement to New York from the south.  He played a crucial role in educating Blackburn as a teen and encouraging his interest in art and activism. Similar to Alston, a number of other artists played a role in Blackburn’s artistic development and he, in turn, maintained those values and continually aided other artists throughout the remainder of his life. Blackburn’s establishment of The Printmaking Workshop in 1947 changed the trajectory of many artists’ lives by creating a community and offering a space for artists of various skill levels to learn from each other, experiment, and perfect their technique. 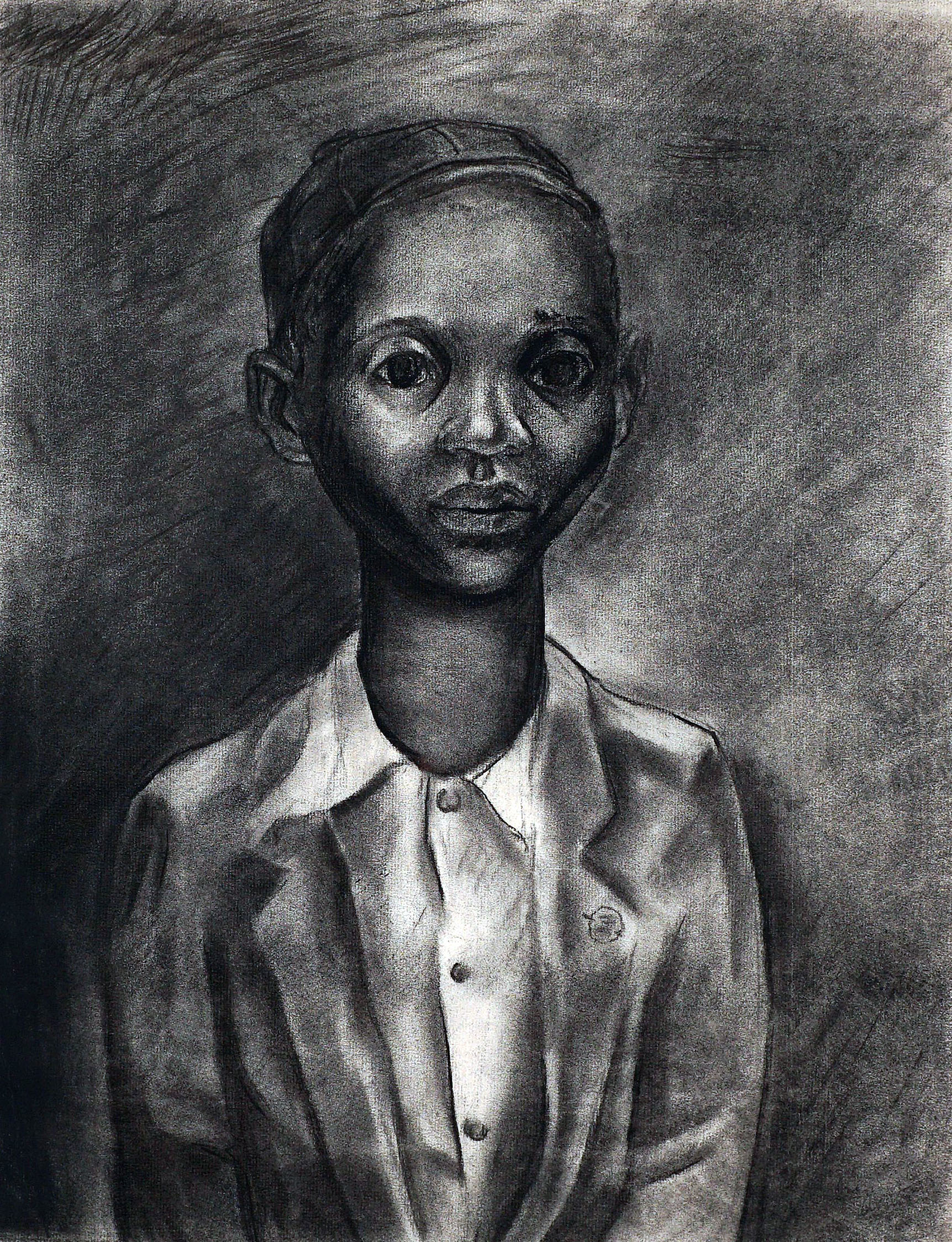 The exhibition ebbs and flows through multiple spaces, leading the viewer through a journey and introducing new artists and artistic techniques with every turn. Within the first gallery space is a very distinct 1949 Charles White lithograph, “John Brown”. True to his aesthetic and the conceptual nature of many of his lithographs, the rendering of the solo figure in the work depicts White’s graphic style, brilliant use of light and shadow, and poignant subject matter. John Brown was an American abolitionist leader from the nineteenth century who dedicated his life to ending slavery. Brown’s legacy is two-fold. Within many Black and abolitionist communities, he is thought of as a martyr because of his participation in the assault on the federal armory at Harpers Ferry, Virginia, where he sacrificed his life. However, he is often criticized as well because of his use of violence within his abolitionist tactics. White’s piece was printed by Blackburn and honors Brown by including the seriousness, determination, and visionary nature that’s applauded as part of his legacy. White and Blackburn maintained a relationship as friends throughout their careers and Blackburn printed many of White’s works. 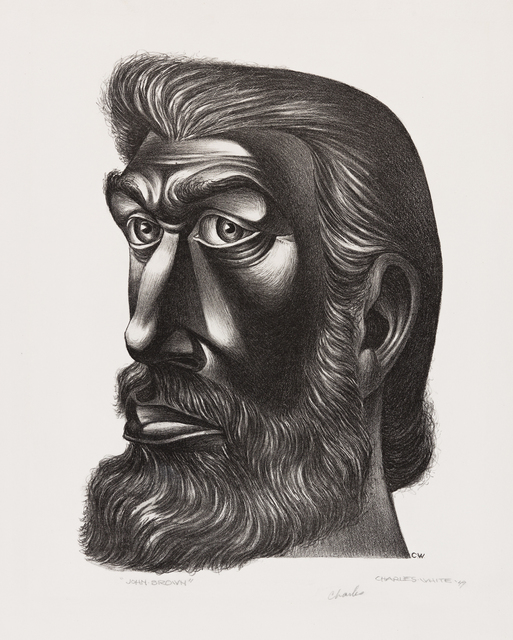 A great majority of the works in the exhibition were printed on paper through linocut, woodcut, and lithograph processes, yet Faith Ringgold’s 1984 “Death of Apartheid #2” was made by intaglio printing with a relief roll on canvas. From the beginning of her career, Ringgold  addressed social issues, often centering on overt and underlying racism. The abstraction in this work makes it particularly interesting because Ringgold’s most well-known works are predominantly figurative. The print also stands out visually because of the simplicity of the curvilinear aspects, the red color choice, and the layering technique used. Nonetheless, the commonality of interests in activism throughout the developed printmaking community was pronounced within many of the artists’ work, including Blackburn’s. 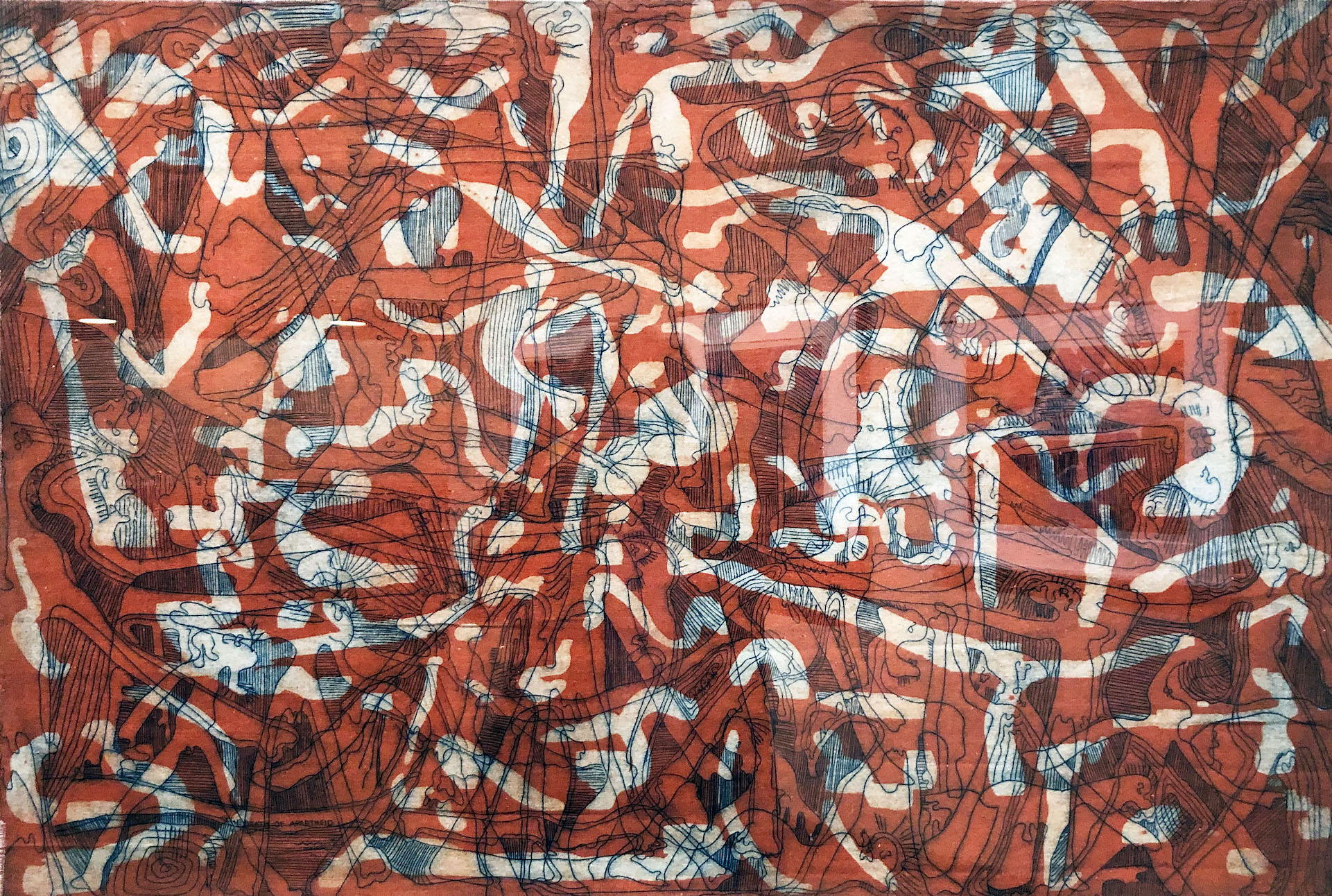 Although small in scale, one work that is prominent within the context of the exhibition is Blackburn’s “Refugees (aka People in a Boat)”. Blackburn printed the work during his late teen years, already displaying his craftsmanship and interest in commentary around complex social issues. The work portrays a group of individuals in a small boat navigating calm water, yet it is subject to multiple interpretive possibilities. The ripples surrounding the paddle boat hint at movement and the simplified landscape offers information regarding the distance between the group and the shore. Their previous location and destination are left as mysteries to the viewer.  Blackburn gives visitors an idea of subject matter and social relevance with the title, leaving the context and more conceptual understandings in the hands of the audience. 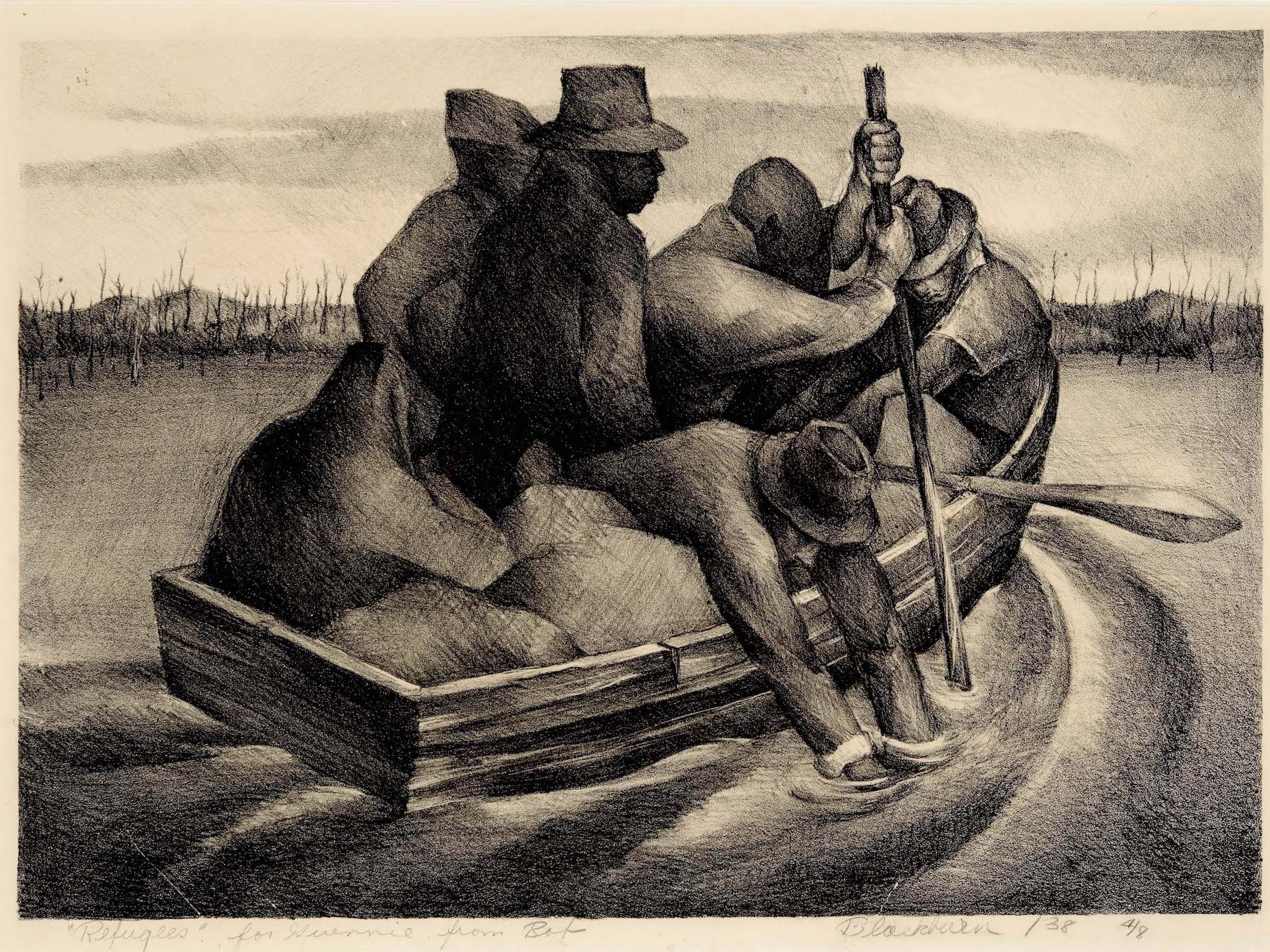 Robert Blackburn, Refugees (aka People in a Boat), Lithograph, 1938

Just ten years later, Blackburn’s work experienced a shift to more abstracted forms, which remained a focus throughout the rest of his career. With his friend and teacher, Ronald Joseph, Blackburn began creating vibrant, abstract gouache paintings based on still lifes consisting of everyday objects. As he continued, Blackburn’s works became more abstracted. Many Black artists made a similar decision around the same time, contradicting the expectation of Black artists to concentrate their work solely on addressing social and cultural issues. Joseph and Blackburn instead experimented with the power and visual language of shape, color, and line. 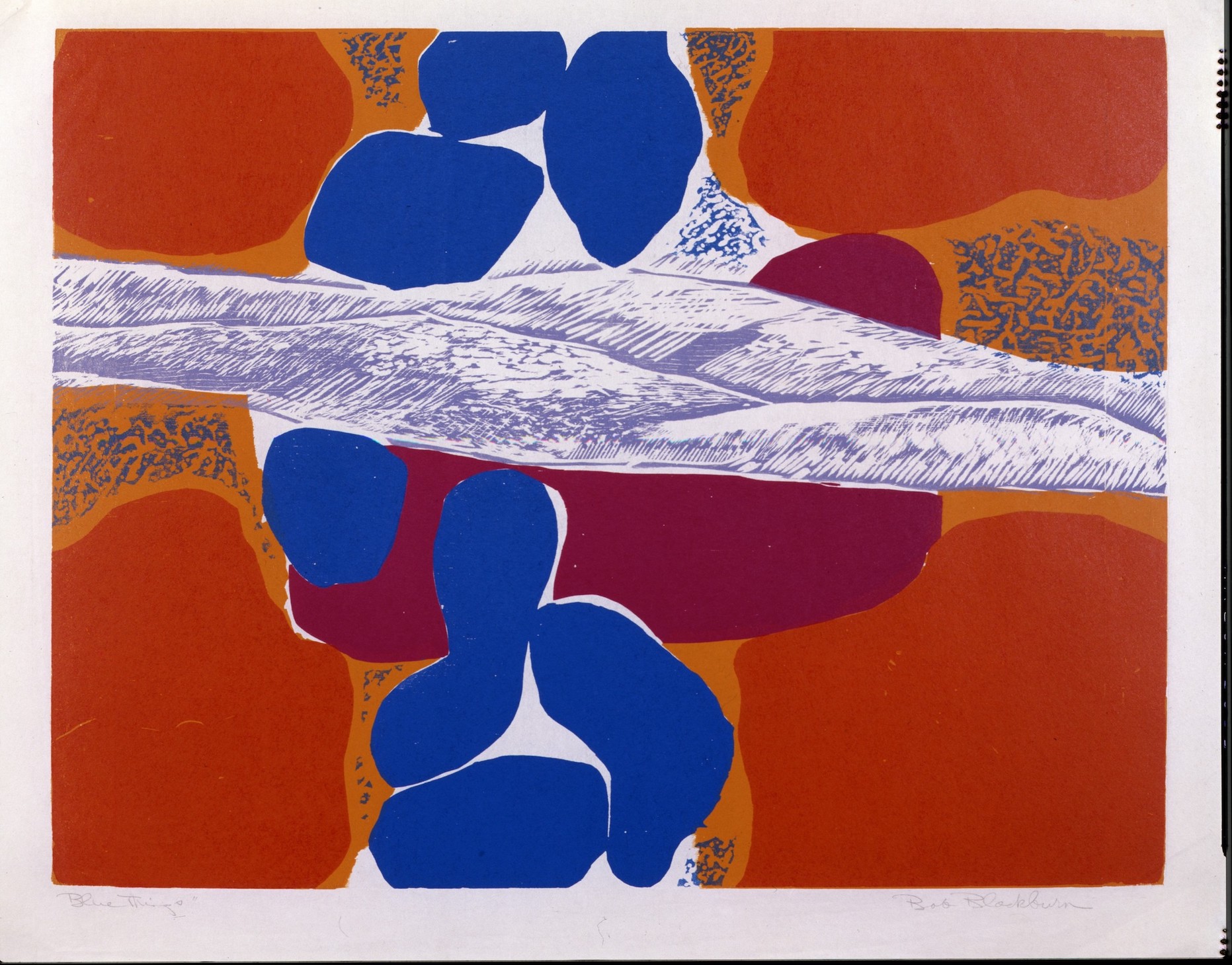 Mildred Thompson’s “The Third Mystery” is installed with no additional descriptive text. Assumptions can be made regarding Thompson’s intention and the meaning of the work, yet what’s most important is always the work itself. What makes the piece stunning and arresting is the centralized grayscale merging within abstracted forms, penetrated from multiple directions and entry points by Thompson’s signature linework. 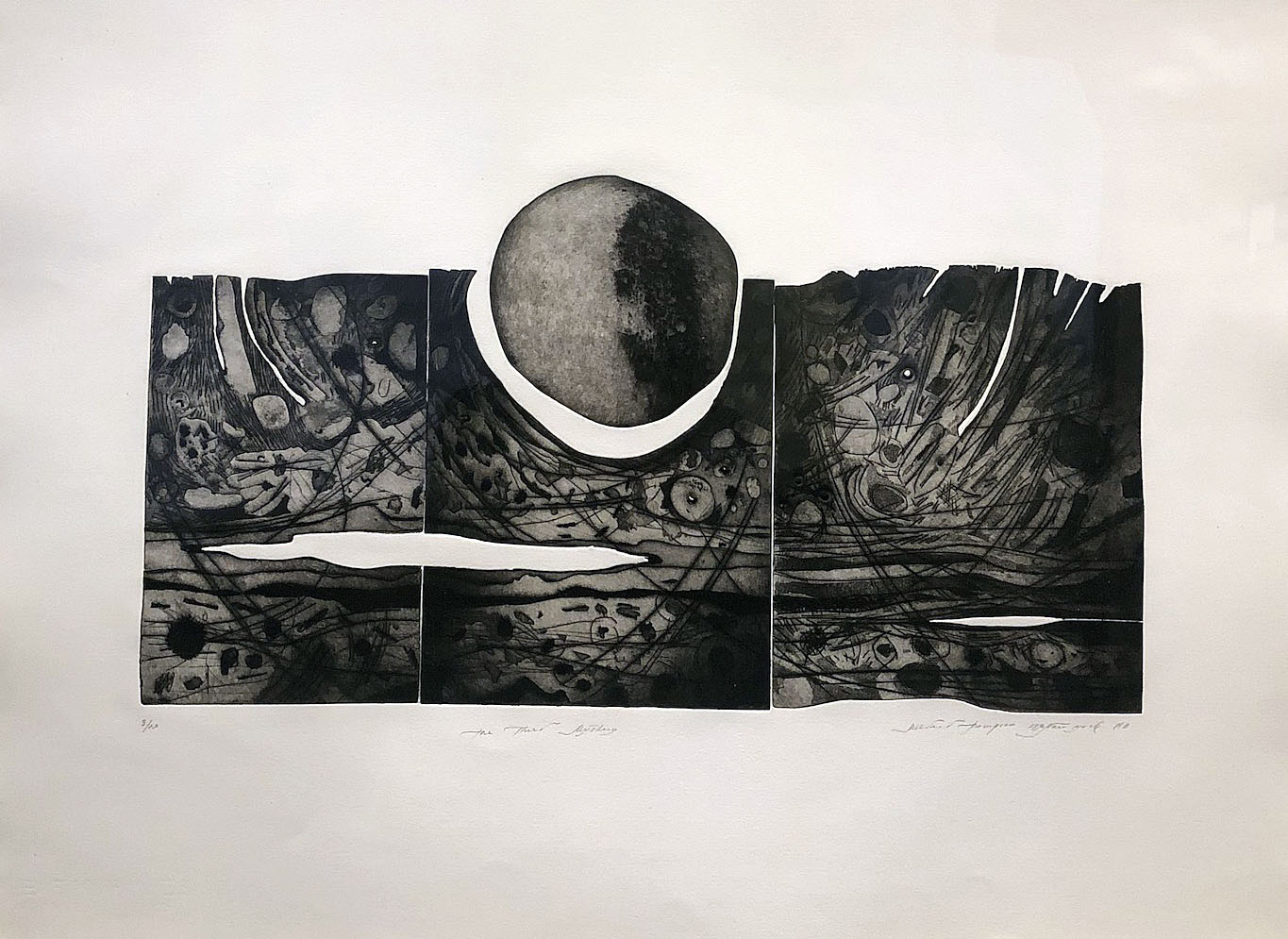 In keeping with the tradition of Blackburn’s desire to teach and make the process of creating accessible to all, brief definitions, descriptions, and examples of artistic techniques are included in the exhibition. Two small adjacent gallery spaces in the center of the exhibition examine woodcuts and etchings. The two separate spaces showcase works by members of Blackburn’s artists’ community as examples of each process. 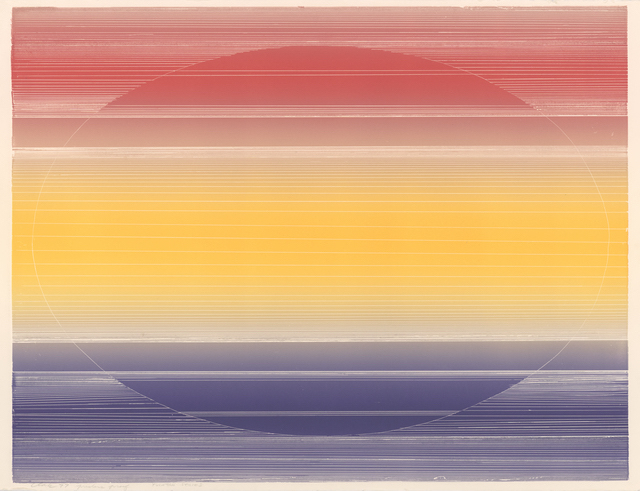 The exhibition culminates with a color lithograph bookending the show. It highlights the most significant aspect and the connecting thread of the exhibit, Robert Blackburn himself. The image of Blackburn printing from a lithographic stone was created by African American Detroit-born artist Ron Adams the year before Blackburn’s death. After Blackburn’s life of transforming the printmaking realm, investing in the careers of some of the most well-known artists of the last century, and ultimately proving the importance of artistic communities, Adams’s print is a perfect tribute, honoring Blackburn at the end of his life. 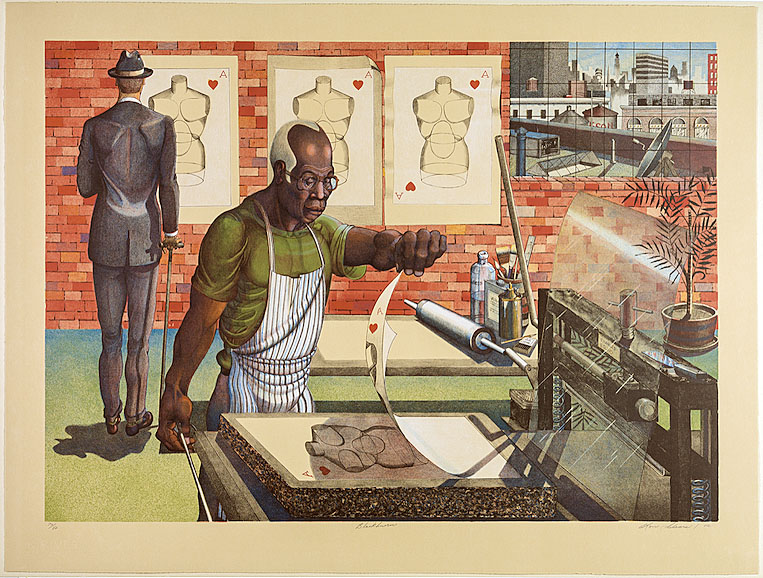 Of course, the exhibition features multiple incredibly brilliant works by Blackburn. Along with his innovation as a printmaker, an overarching theme of the exhibition is his unwavering dedication to the many artists who impacted his life and the lasting printmaking community they became. He wasn’t satisfied with receiving opportunities to create artwork for himself. He wanted printmaking to be available to all artists, at any skill level, and that’s exactly what he created through The Printmaking Workshop over seventy years ago

Robert Blackburn and Modern American Printmaking was organized by the Smithsonian Institution Traveling Exhibition Service and curated by Deborah Cullen. It will remain on view at the DIA through Sunday, September 5, 2021.