In his first solo exhibition with David Klein Gallery, Robert Schefman presents a series of works exploring the hidden world of secrets. Via social media, Schefman asked followers to send him one personal secret, no names attached. Protected under a cloak of anonymity, Schefman coaxed quite a few people out of their shame and guilt to reveal the darkest of grave-destined secrets. These confessions became the framework for this series. The paintings are allegorical visual poems inviting the viewer to peer into the subjects’ private space glimpsing their angst or discomfort. Particularly striking is “On the Edge of the Moon,” wherein a woman seated alone on the beach in an ordinary kitchen chair, faces out toward the gloom. She appears to be contemplating her circumstances while the rhythm of the surf calms and comforts. A vital component of this painting is scale. At 78 x 120”, the viewer can mentally walk right into this scene illuminated only by the headlights from a waiting car. 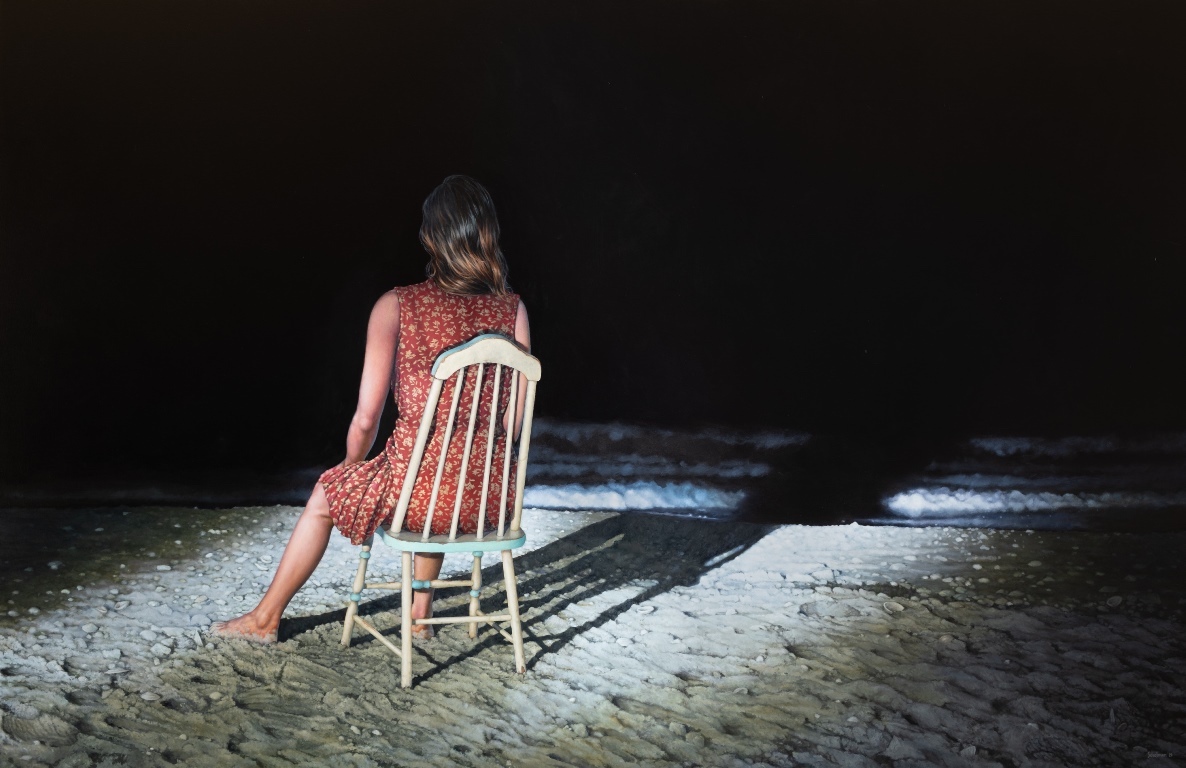 Visually poignant is “In Love with My Best Friend.” Unable to declare his love, possibly at the expense of a valued friendship, the unrequited lover sits amongst tokens of lovelorn and childhood toys, possibly symbolizing the length of the relationship. A bare light bulb harkens to harsh interrogation, coercing the admirer to give up his ghost and confess. His head is slightly bent toward his chest, implying the burden he carries on his broad but heartbroken shoulders. 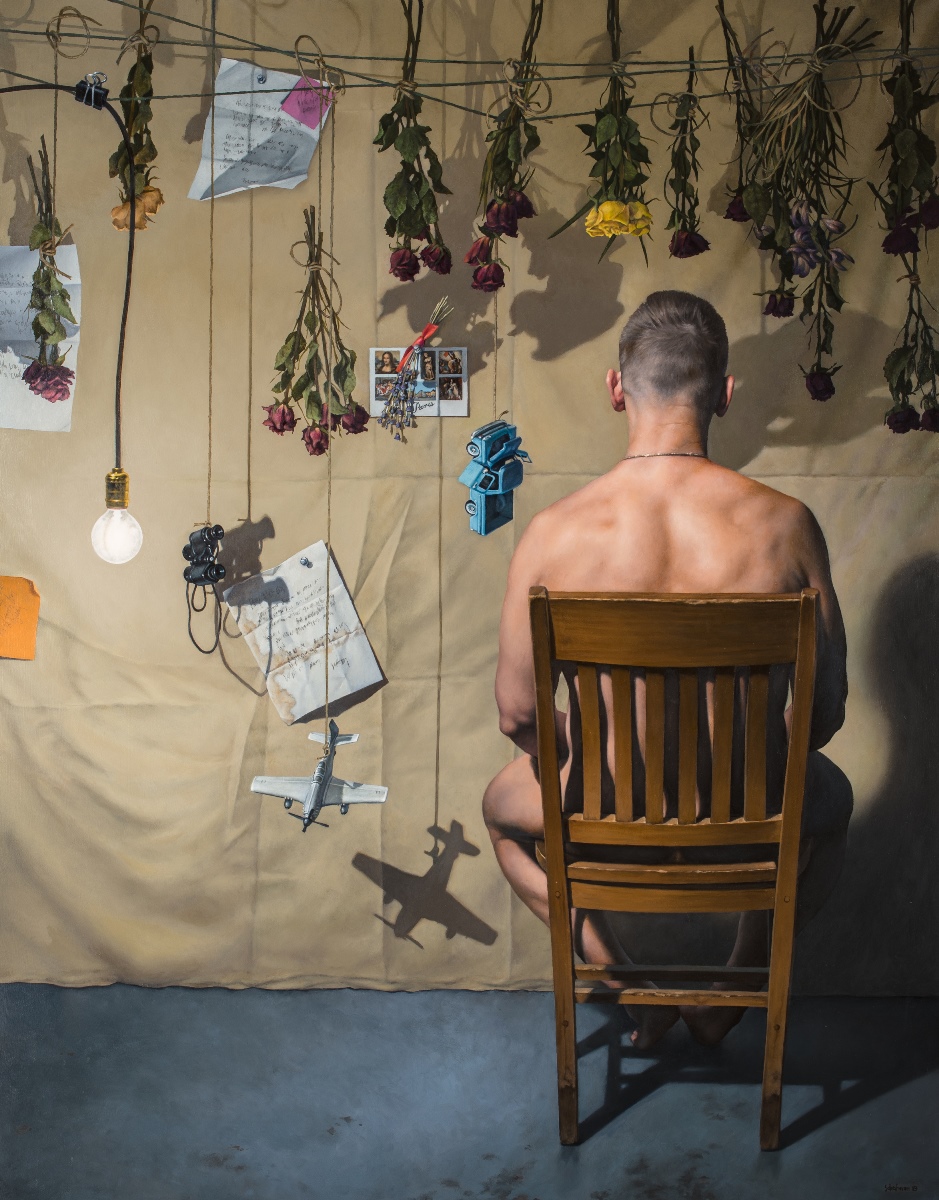 Using our familiarity with texting and Twitter, the laser cut words-only pieces, devoid of a supplied visual reference, allows the viewer to consider their secrets. As a painter, reading “Someone Else Did One of My Paintings and I Signed My Name” caused my left eyebrow to rise in Scarlett O’Hara judgment. Identifying with an author makes the show somewhat participatory and taps into empathy on shared common ground. #metoo 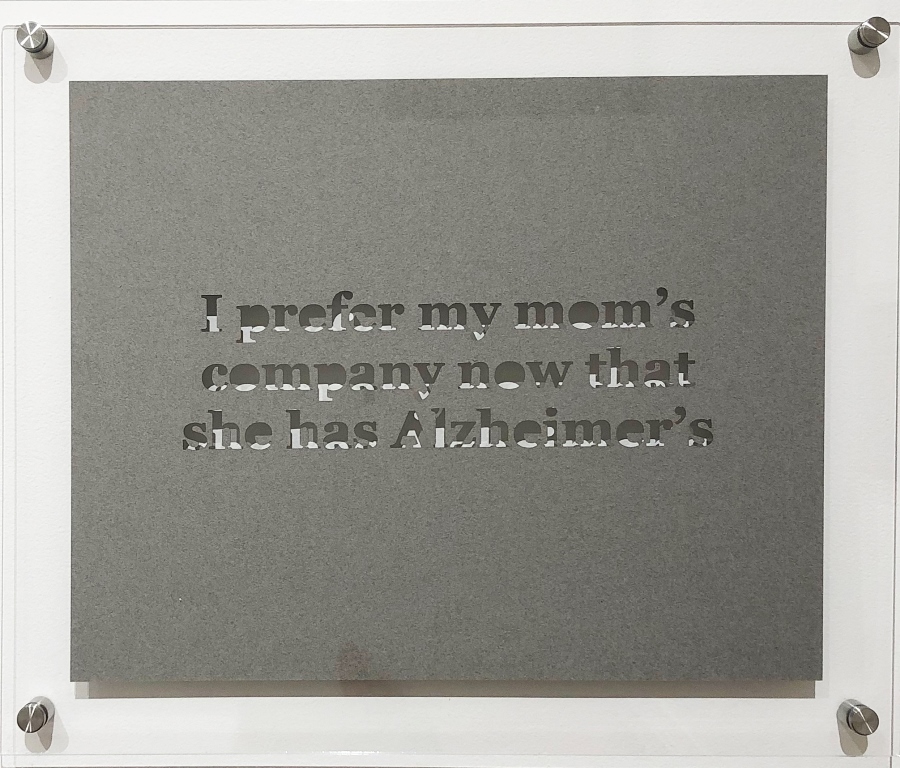 Robert Schefman, “I Prefer My Mom’s Company Now That She Has Alzheimer’s,” laser-cut paper 16 x 20″ 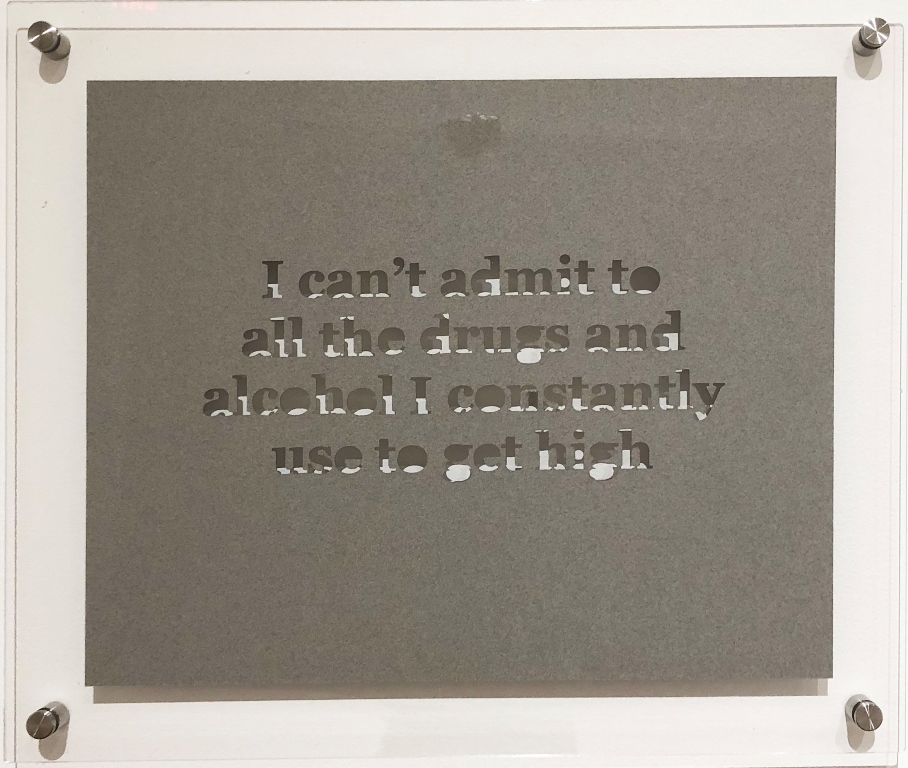 Robert Schefman,  “I Can’t Admit to All of the Drugs and Alcohol I Constantly Use to Get High” laser-cut paper 16 x 20″

Technology lends to speed and convenience. It made collecting this subject matter considerably easier. What makes this show genuinely compelling is mindful, patient execution. Schefman deftly wields his paintbrush with the best of the Renaissance Italians, masterfully telling dramatic stories through light and shadow. Throw in a side of Dutch trompe l’oeil, and the illusion is astonishing. Upon close inspection, however, it is surprising and delightful to discover the brushstrokes are looser than anticipated affording a soupçon of personal expression. A very relatable image is “Secrets.” In an attempt to silence his torment, this secretary seeks to ‘bury the evidence literally. I get that this image is metaphorical, but the idea of a thief on the precipice of capture, hastily disposing of material that will surely convict him, is far more romantic. 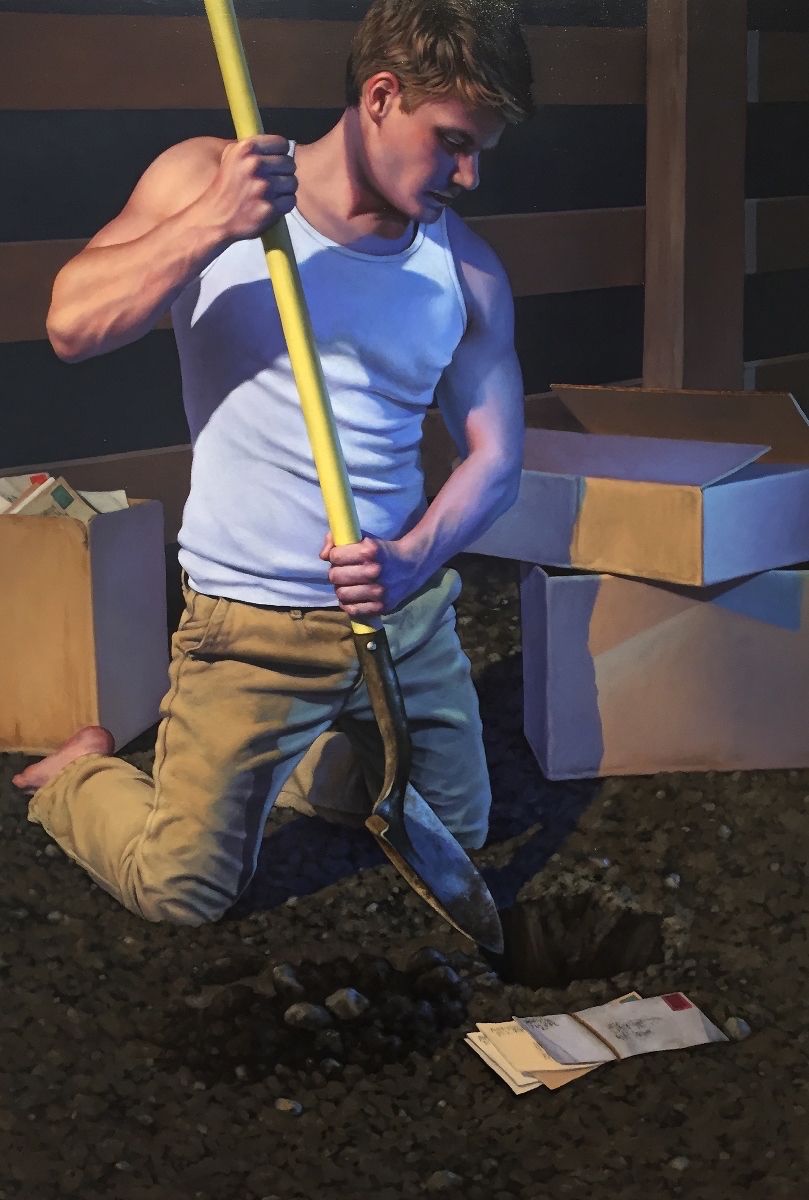 KF: Assuming the models aren’t the confessors, why are most of the subjects’ backs turned?

RBS: Point of view is a valuable element in the narrative, with implications for both content and visible form. It accomplishes a number of goals. The back of a figure gives the viewer an easier opportunity to project themselves into a subject, rather than an encounter a specific person. In “The Edge Of The Moon,” point of view was used to keep the viewer isolated from the figure on the beach, and still experience the intersection of earth, water, sky, and self.

KF: Your genre has historically been an illusionist narrative via sculpture and painting. Why spell it out now with the text-only/no image pieces?

RBS: So much of the “Secrets Project” was generated by words that I wanted to honor the written word with pieces that focused on them. I have a long history of making paper sculpture as well as 2-dimensional work, and developing an idea with these elements resolved itself in a pointed way.

KF: What about your secrets? Are they lurking somewhere in this series unidentified?

RBS: Most of the secrets fell into categories; experiences, fears, and obsessions that we all share, myself included, but the rule of the project is anonymity, so my secrets remain.

Technology has permeated just about every aspect of our lives. From the comfort of our sofa, we command our smart devices to deliver groceries or name a state capitol. (I shudder to think what’s being recorded.) Many people are using social media channels as a crowdsourcing confessional, looking for validation from strangers as often as from people they actually know. It’s getting harder to maintain personal privacy while we demand transparency from public figures. Some feel relieved when they finally clear the slate. What about the participants in this project? Did this action unburden the keepers and free them from their prison? Ask Alexa. 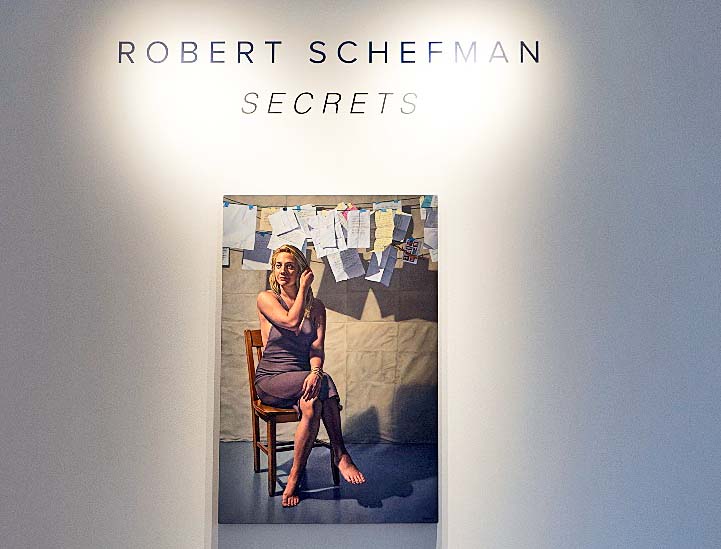 “Robert Schefman: Secrets” remains on view through December 21, 2019 at the David Klein Gallery