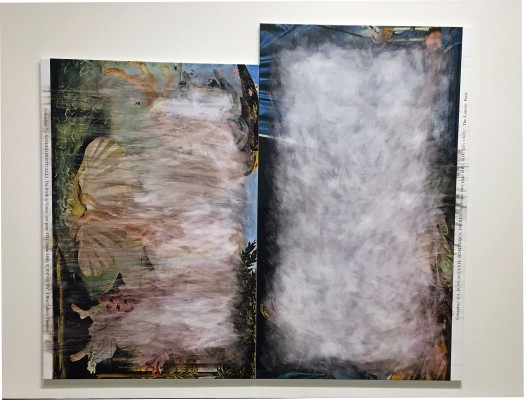 Greg Fadell is part of the Detroit Affinities Program, a series of solo exhibitions at Museum of Contemporary Art Detroit (MOCAD), beginning in September 2014 with John Maggie and continuing through January 2018. Ten artists, half from Detroit, and half from outside areas will exhibit during that period.

“We try to bring a broader community together around issues. It’s about letting us understand ourselves better, it has also provided a broader network for local artists and elevated them onto the national and international stage of contemporary art, including showing their work outside Detroit,” says Elysia Borowy-Reeder, executive director of MOCAD.

Mr. Fadell’s work opened May 15, 2015 and includes two-dimensional work, three dimensional work, and video. The two dimensional work is taken from museum posters where the imagery is worked over with chemicals in a kind of abstract expressionist manner. For this observer, the work is not a parody, like in Marcel Duchamp’s Mona Lisa L.H.O.O.Q. 1930, but in some sense could be interpreted as a ready-made with an alteration. Throughout the exhibition, Fadell pays careful attention to the size and shape he presents where he intentionally smudges the art history reproductions, leaving some reveal. When Andy Warhol screened a Campbell Soup can, some thought it was a spoof. When Roy Lichtenstein enlarged a frame from a comic strip, there were those who thought he was putting them on, and when the minimalist, Ad Reinhardt made an all-black painting, the work challenged most viewers’ patience. And some will remember when Robert Rauschenberg made a drawing with an eraser, titled Erased de Kooning Drawing, in 1953. All of these works build off an intellectual idea that an artist’s work is embedded in the viewers explicit knowledge of the process of making art: an artistic moment. Windows in Paris, where he was drawn to the soap-like swipes on vacant retail display area, inspired Mr. Fadell’s work. He came back to Detroit and soaped some windows, and then he soaped some large canvases and called them Nothing. His exhibition at the Simone DeSousa Gallery in 2012 was called Nothingness. No image is not new, but what is new is Fadell’s use of famous, well celebrated historic imagery that has been smudged over. If I had to call it something, I might call it a Dada practice by a skateboard enthusiast. 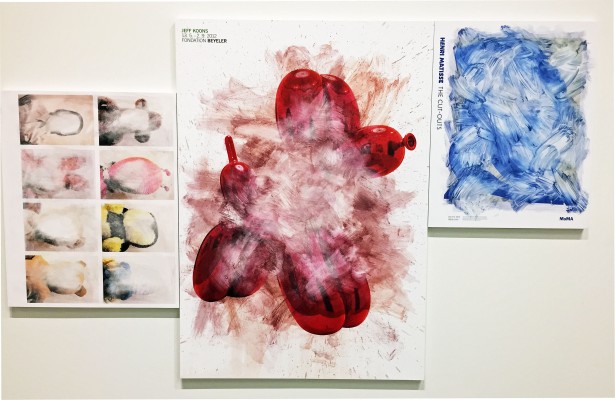 I posed a few questions for Greg Fadell.

Ron Scott – How and when did you first get interested in making visual art?

Greg Fadell – As long as I can remember I’ve been into artistic ways of expression and I consider skateboarding, which I’ve done since I was six years old, the first and most important one. When I was young I also enjoyed drawing, in high school I was really into photography, and I chose to study film in college. Lately I’ve leaned toward painting, but I let my ideas dictate what medium to choose.

RS – Having heard your talk, you mentioned being bored by art history?  Did you mean the art history classes that bored you?

GF – The literalness of how art history is treated bores me. I have always thought what lies between the lines of “historical facts” is more interesting.  I view art history as mostly opinions that are fluid and malleable, so why not shape it my own way and create something more interesting than the ideology that is presented and usually just parroted.

RS – Do you like or have criteria for the art museum posters that you select, or is that arbitrary?

GF – It is not a question of liking or disliking – I look at the posters and the imagery I choose as a tool.  If the tool fits my purpose, I use it.

RS – Is there any relationship between your skateboard work and your visual artwork?

GF – For me skateboarding is more than an activity – it is a mindset; a way of thinking that permeates my work consciously and subconsciously. 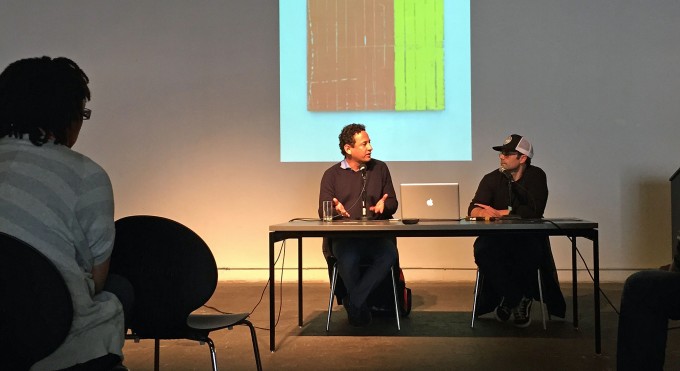 Greg Fadell gave a talk with curator Jens Hoffman on the Saturday following the opening. Along with some slides, he made the case for his work using historical references and some chronological slides of his earlier work. Today it’s commonplace for venues to have the artist present, and for this viewer it was important to hear how the artist came to his conclusions. Overall, the work seems like an investigation, one that takes information and makes changes to the imagery. The transition from his pure abstract work to these altered museum posters seems logical and may give him some traction in terms of authenticity. A question might be would I like to have one in my living room? If I am a collector who is looking to be the first to enjoy the novelty, maybe so. Fadell seems to use skateboarding as a metaphor for his life: Anything is possible. Take action and be yourself and tap into the creative flow.