Magical realism is the watchword of the Whitney Snow solo retrospective on display at the Scarab Club – the first since the painter’s passing in 2006. Snow certainly captured the spirit of magic realism, wherein surreal or “magical” elements are introduced to otherwise everyday scenarios. Likewise, his large-format paintings contain many cultural and art-historical allusions, as well as a symbol set designed for sly, if somewhat abstracted, political commentary – another imperative of magic realism as a device is its use in holding a somewhat whimsical or disruptive mirror to society or culture. In these respects – and in terms of realizing technically well-rendered tableaus – Snow’s work is very successful. 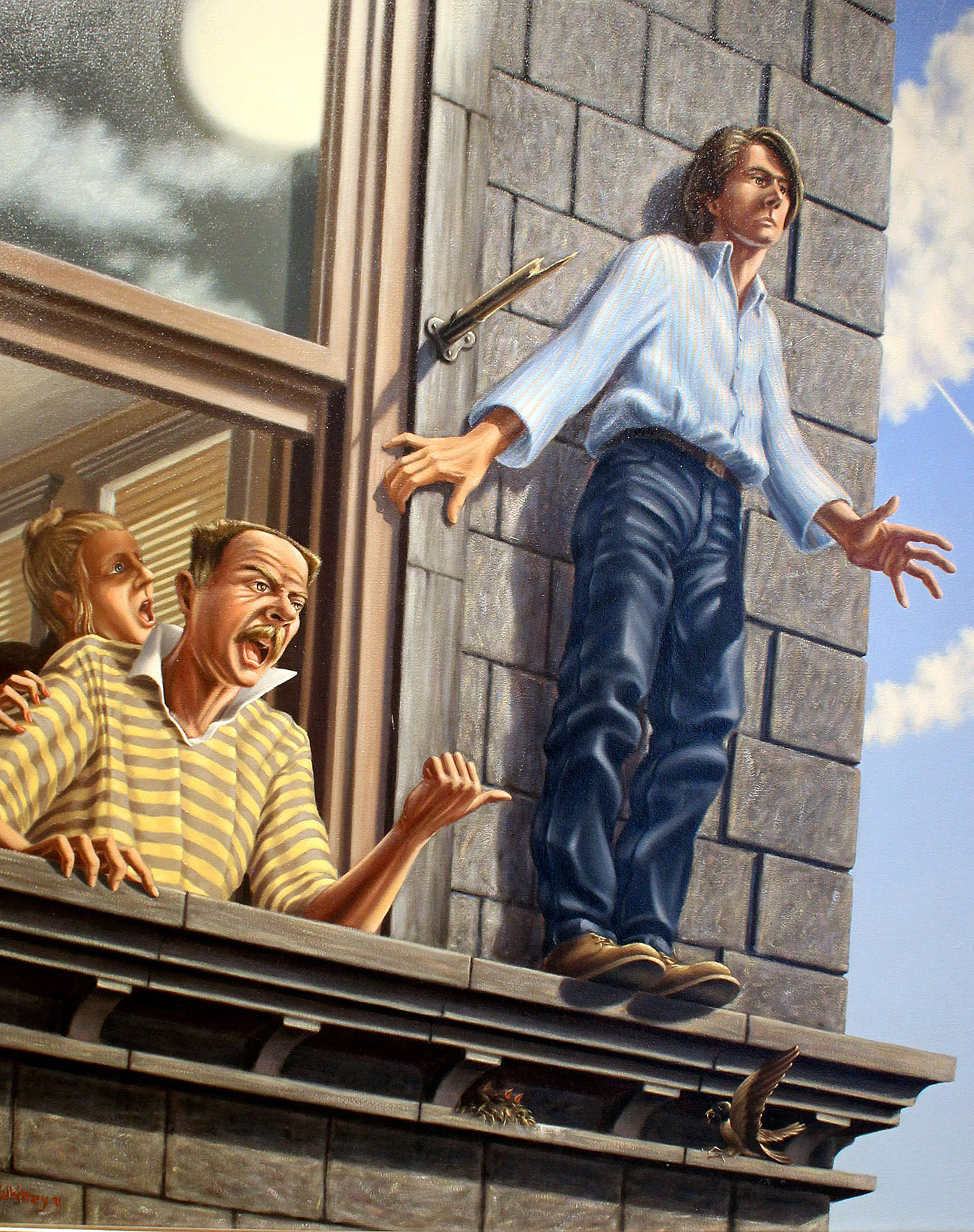 Whitney Snow, Living on the Edge

But there is a creeping sense of vagueness that makes it hard to digest these images, on some level. Snow’s scenarios are, at times, amusing, but their magical elements leave them steeped in a kind of cartoonishness that makes it a challenge to take them very seriously. There is a fable-like quality to their narratives – again, much in alignment with the history of magic realism – but these protagonists engaged in foolish or nonsensical pursuits seem largely unmoved by their surrounding circumstances. One might expect a glimmer of consternation from the subject of Technology on my Back, who is being ridden like a backpack by a green demon of gambling and internet addiction, but there is barely a frown. One might anticipate high drama from the subjects of Living on the Ledge, a couple standing at the window addressing a third person poised to jump off a high ledge – the man on the ledge seems utterly indifferent, and the one at the window seems, at most, peeved. The de facto expression for Snow’s subjects is a deadpan. The experience of viewing his paintings is much like hearing about a crazy dream someone had last night – doubtlessly, each element is all terribly meaningful…but it lacks a kind of visceral immediacy to engage the viewer. This is particularly surprising, in light of Snow’s rather virtuosic ability to visualize his dreams. 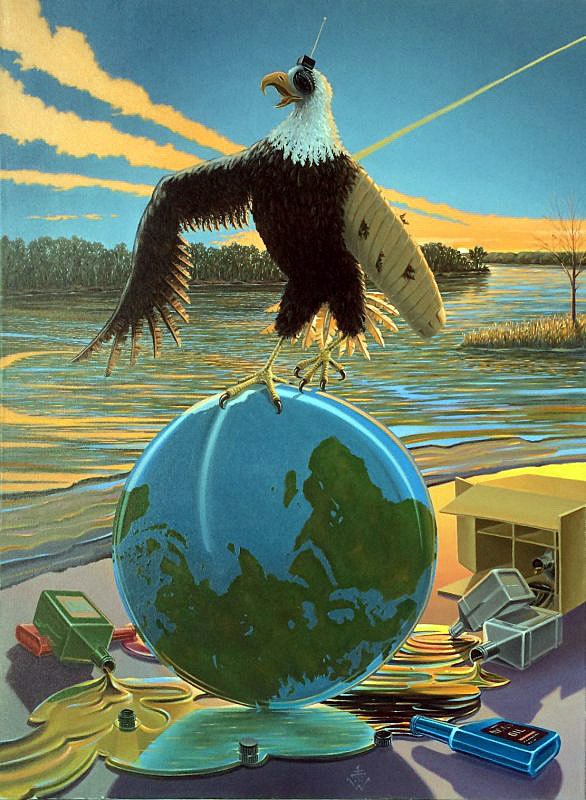 Arguably, this does not represent a problem. Indeed, all of these things – dream states, nonsense, and reality-disconnect – fit within the stylistic mechanisms of magic realism, and that being the stated parameters for Snow’s oeuvre, it is rigorously on-target. So, too, there is a wealth of symbolism, both in the form of pop cultural references and the complete canon of art history, from Roy Lichtenstein to the Greek muses. One imagines that a well-versed art historian could be happily occupied for some time identifying and picking apart these Easter eggs. This viewer, however, remains unmoved. Snow’s work seems to be a failing of both the magic and the real – too fine in its details to embrace abstraction, too wedded to some kind of discernible references to transcend the source material. The Easter eggs are just sitting there, right in the middle of the lawn; picking them up offers little satisfaction. And though it is wrong to fault an artist for making work that lacks relevance a decade after his passing, the current-day political stakes honestly feel just a little too high to swallow social commentary as generalized as American Sunset, wherein a bald eagle with a broken wing (get it?) sits atop an upside-down globe (get it???) soaked in a pool of spilled motor oil (GET IT???). 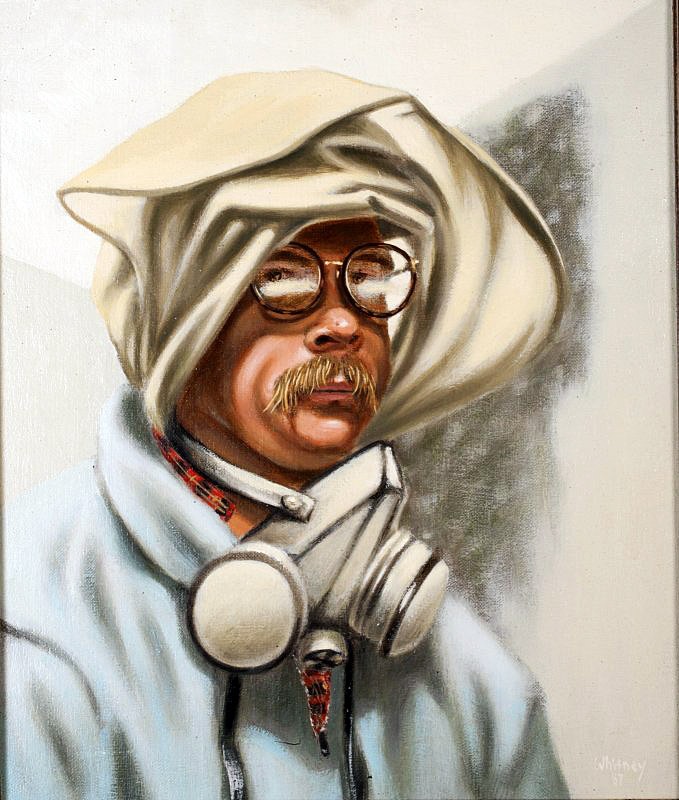 Whitney Snow, Self Portrait of a Painter

Really, this might not stand out so starkly if it weren’t for the striking quality of the few examples of Snow’s “realism” paintings. Denver Skyline is about as straightforward a subject as one could encounter – the view out a window, blind half-drawn against a cloud-filled sky, clock on the sill, and just a few buildings visible. All of Snow’s ability to render fine details is applied to the exhibition sole believable female subject, in Portrait of a Woman. The woman makes piercing eye-contact, actualized to herself, and by extension, actualizing the viewer. Self-Portrait of a Painter seems to suggest that Snow took himself at least a little bit seriously. These images have a kind of quiet dignity, and demonstrate that Snow was capable of something beyond madcap imagery and imagistic political satire. In a poetic missive titled “The Illusion of Light,” Snow reveals a deeply painterly sentiment:

“It can teach us joy through observation and work
and when the day is done, we can return to the dark
with a heightened sense
of the infinite cycle of light and dark.  – Whitney Snow

One detects a hint, at least, that this master painter perhaps defaulted overmuch in the direction of his impish spirit; press beyond the magical veil, and you find a more serious sentiment. It is that gravity, more than Snow’s fanciful and magical tableaus, which inspires great curiosity in this visitor to his mind palace.