Gallery Project, one of the most ambitious annual art exhibitions in the region, returned with a roar this month, opening its fourth installment on Monday, August 1st with Re:Formation – which will remain on display in the former department store at 600 Jefferson Ave in downtown Toledo, Oh through Wednesday, August 31, before moving to its second location at the Ann Arbor Art Center (117 W. Liberty) on Friday, September 9, and remain on display there through Sunday, October 16. As in previous years, the exhibition draws some 50+ local, regional, and national artists together around a theme, however, the tone of this year’s theme – Re:Formation – strikes a markedly different note than last year’s theme, Wish List. Co-curators Rocco DePietro and Gloria Pritschet were compelled to pursue a more pointedly political theme this year, and the resulting submissions demonstrate the success of that aim. 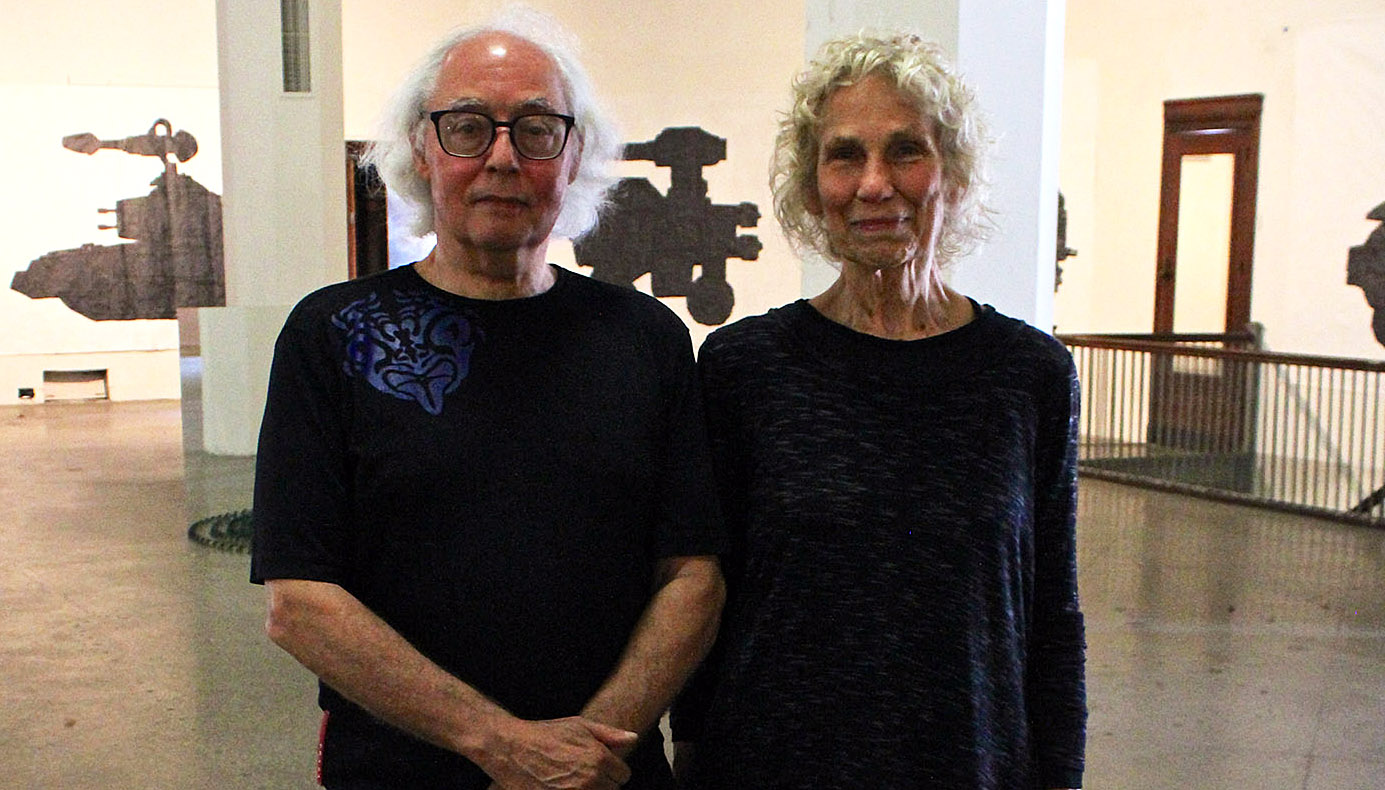 “Last time there was a focus on hope,” said Pritschet, in an interview with Detroit Art Review, “but something shifted, right around November of last year, where people who had never spoken out began standing up, and we knew we needed to re-form around that concept.”

DePietro can pinpoint the moment more exactly: “Everyone had a different tipping point,” he said. “For me it was the shooting of Tamir Rice.” The ever-mounting documentation of increasingly visible human rights abuses has left both DePietro and Pritschet moved to consider what power art has to affect human issues, and sought to create this year’s Gallery Project as an effort to “express the new form that’s taking shape within art.” 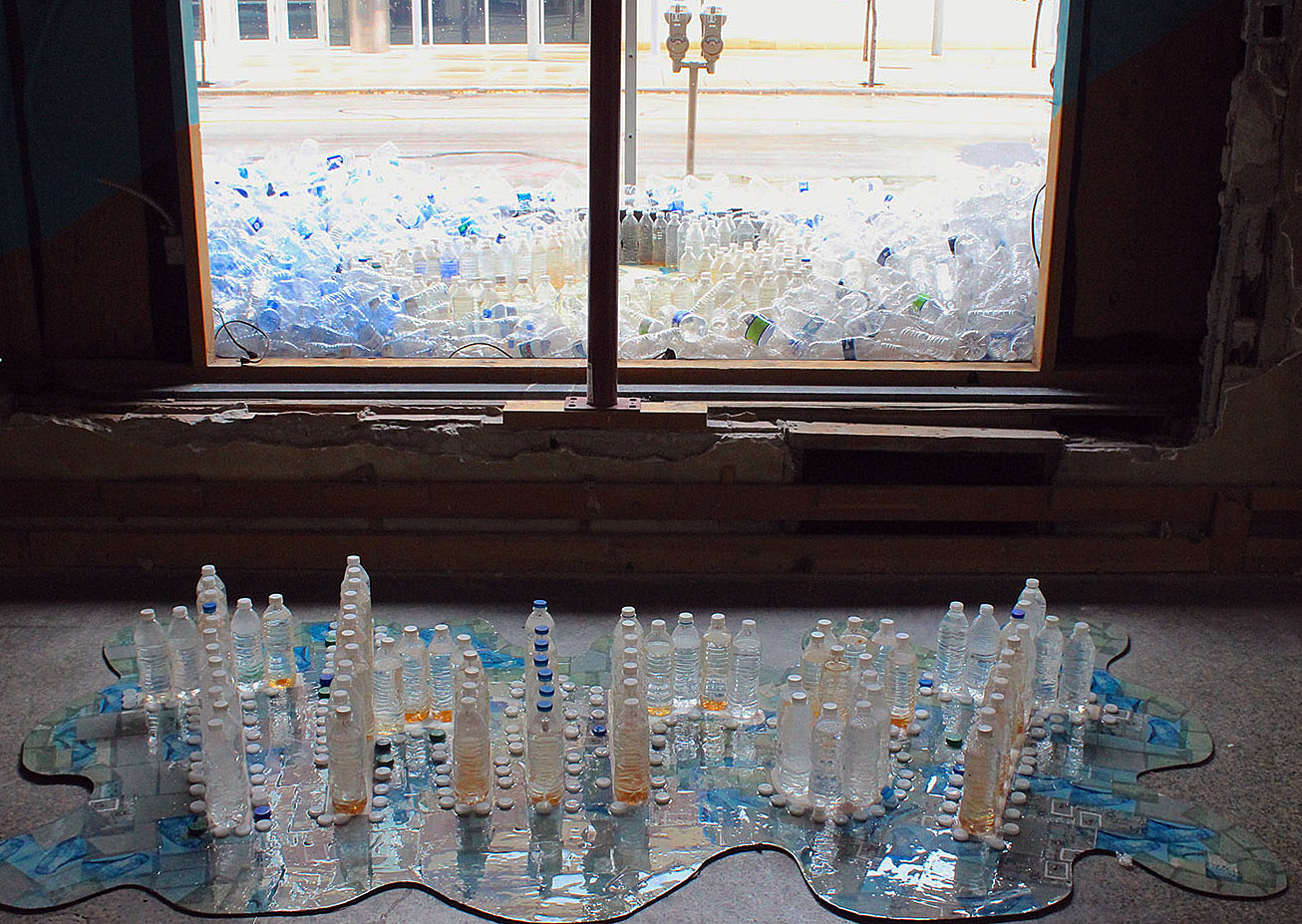 The output varies – as one might imagine, given the vast cross-section of artists included in the show – but a few thematic elements emerged strongly. The Flint water crisis was central to the show, both literally and figuratively. One of the front window displays recreates a collaborative installation originally done in Flint by Desiree Duell (Flint, MI). The piece, which jumps the bank of the window bay and spills out onto the main gallery floor, is comprised of dozens of disposable plastic water bottles – the woefully insufficient temporary measure provided en masse to Flint residents in lieu of a potable water system – outlining the form of a fallen child. The bottles on the floor inside, activated by LED lights, spell out “THIRST.” A series of photographs by Darryl Baird (Flint, MI) capture elements of the Flint water system: Eroded Manhole, Underground Sewer Line, Runoff Control Sewer, and others, each vignetted with a dreamy circular-crop more usually applied to glamor photos. 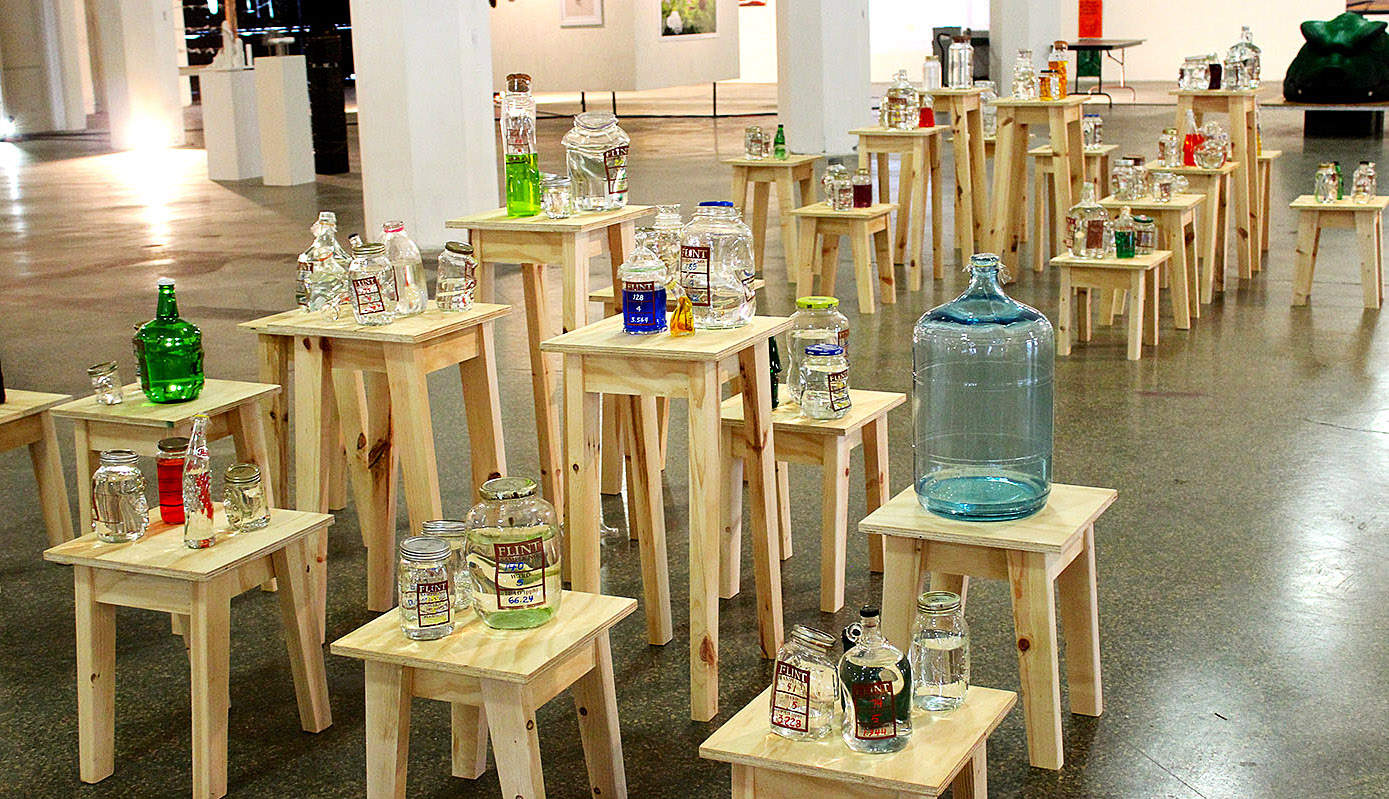 The largest piece in the show is a sprawling installation by Mark Bleshenski (Bay City, MI), Plumbum, located in the middle of the showroom floor. The installation, which draws its name from the Latin word for lead (because lead was used in plumbing in ancient times), collects 100 water samples from Flint faucets into various receptacles, and arranges them into clusters atop two groups of meticulously crafted wooden stools of various heights. The craftsmanship and object repetition is aesthetically engaging – it is a carefully assembled collection, with many forms and colors present – and even playful, as some of the vessels are warped into unexpected shapes and some of the liquids contained within are bright Kool-Aid colors. It is only as one draws near enough to see the data tracked on each vessel that the scene shifts from madcap collection to mad science. 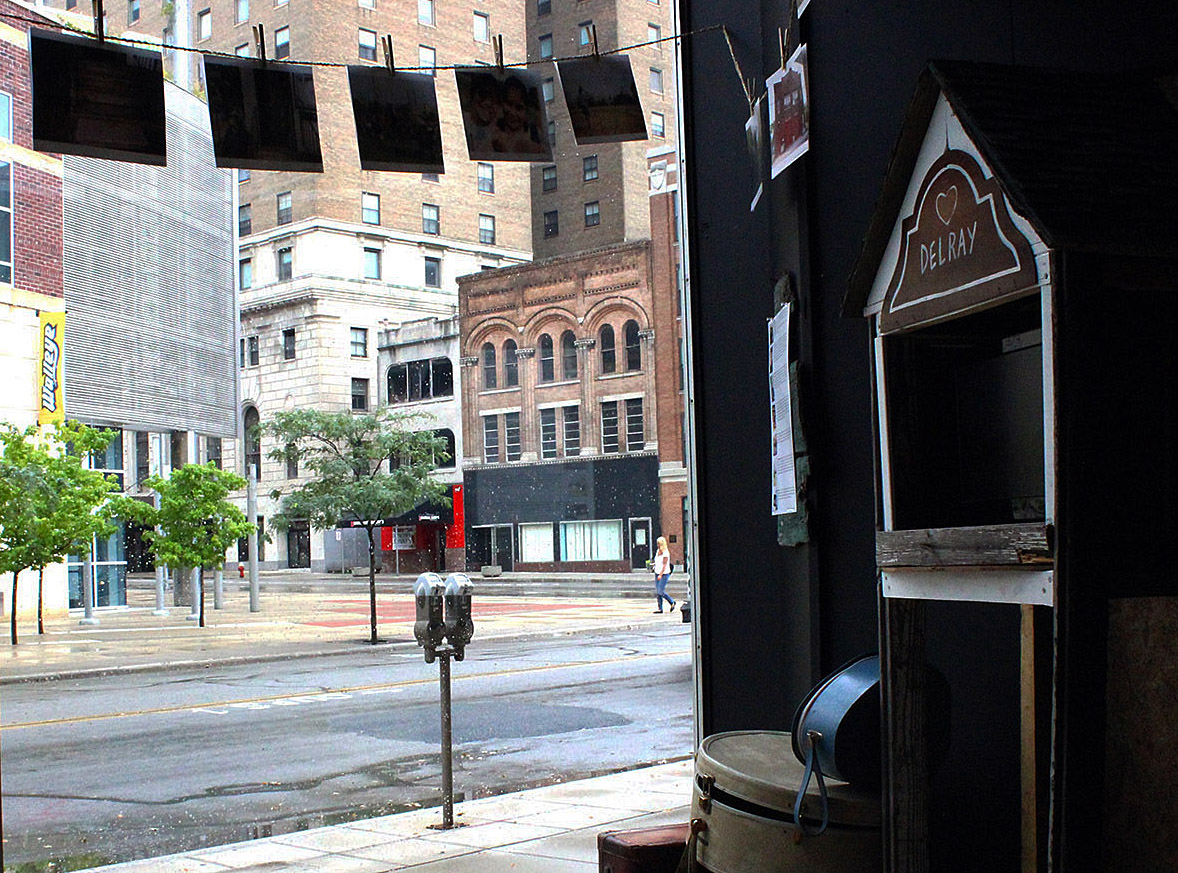 Indeed, data visualization is a recurring theme throughout the show, and increasingly a mainstay of activist art. It seems that artists posses a unique power to process information that might otherwise remain comfortably abstract into aesthetic terms that hit closer to home. Some use a kind of visual synecdoche, as did Pritschet (Ann Arbor, MI) with her In Memorium installation, that neatly layers tiers of children’s shoes, painted black, into a morbid little mound strewn with bullet casings. Others take a documental approach, as did Julianne Lindsey (Detroit, MI) and Elton Monroy Duran (Detroit, MI), whose front-window installation, DELRAY Project, represents an ongoing effort to collect materials, photographs, and audio recordings from the Delray neighborhood, which is slated to be the future site of the Gordie Howe International Bridge in Southwest Detroit. 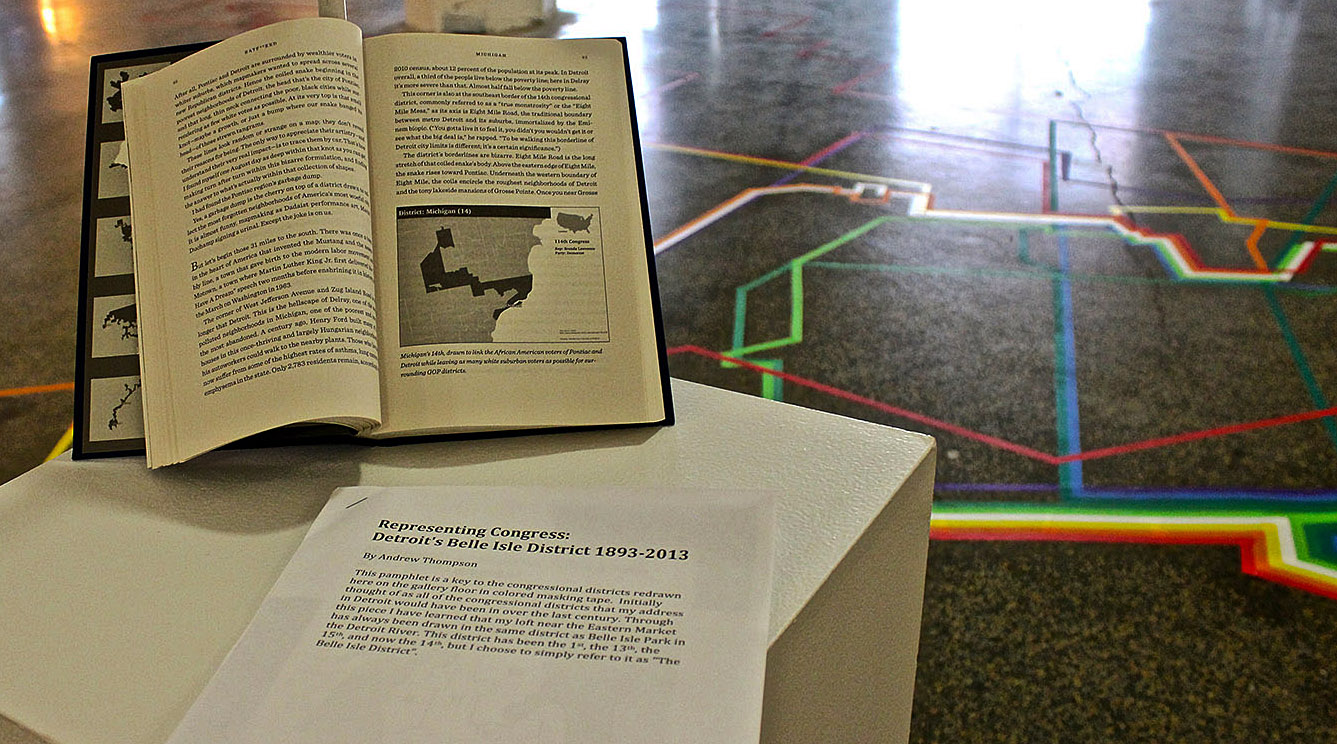 Artists may also be dealing with literal data, as did Andrew Thompson (Detroit, MI) with Representing Congress: Detroit’s Belle Isle 1893-2013, which overlays each successive congressional redistricting of Belle Isle over 120 years in a different color of masking tape. This deceptively simple piece not only underscores the mutability of ostensibly fixed systems upon which our society is built, but additionally nods to the ages-old practice of gerrymandering, which seeks to rearrange or otherwise manipulate a given electoral constituency, so as to favor one party or class.

The current political climate may be a reasonable corollary to this shift in tone for Gallery Project. Last year’s show came in the midst of the Obama presidency, a time of triumph and great hope for progress. With this year’s presidential election shaping up around fear politics on both sides of aisle, it seems fitting – if somewhat demoralizing – that we’ve gone from a mindset of making a wish to speaking out in protest. But, as Prtischet says, “These are the reactions. People can’t be quiet anymore.”

Gallery Project is speaking loudly, and the message is clear – problems abound, direct action is required, and art can no longer satisfy itself with raising awareness. Reformation is coming.