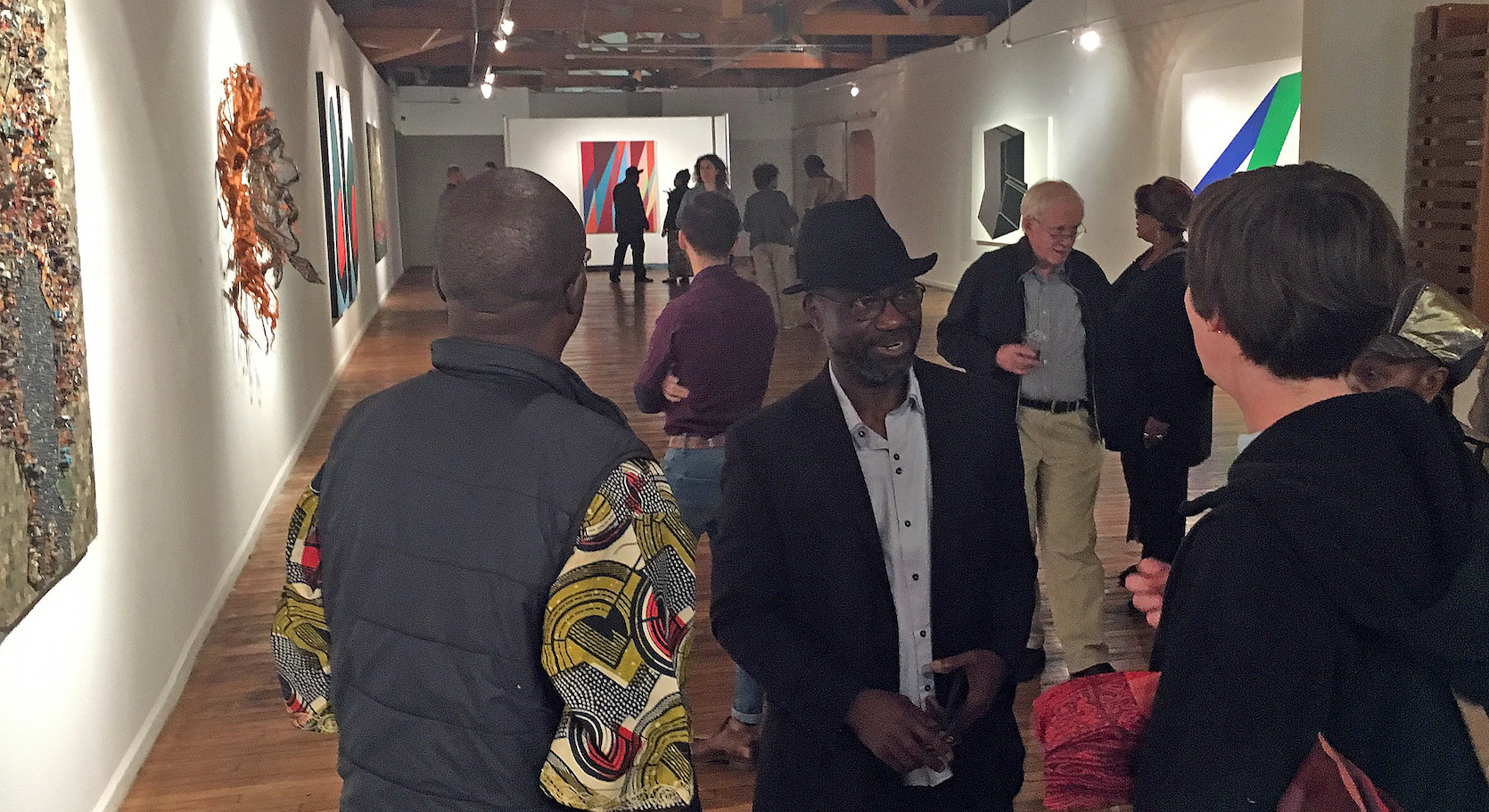 Installation Image, all images courtesy of the N’Namdi Gallery

Curated by Nigerian born artist Osi Audu, “Abstract Minded: Works by Six Contemporary African Artists,” at the N’Namdi Center, is an exhibition that surveys a confounding issue in the history of modern art, which is the lineage of the use abstraction in contemporary African art. For most people, their first association with African Art is ethnographic and stereotypical otherness, but also the exotic richness, of “primitive African iconography.” Thanks to the Detroit Institute of Art’s great African collection, many of us have grown up with that legacy. But now it is truly refreshing to get a glimpse of internationally known contemporary African artists in N’Namdi’s iconic space. 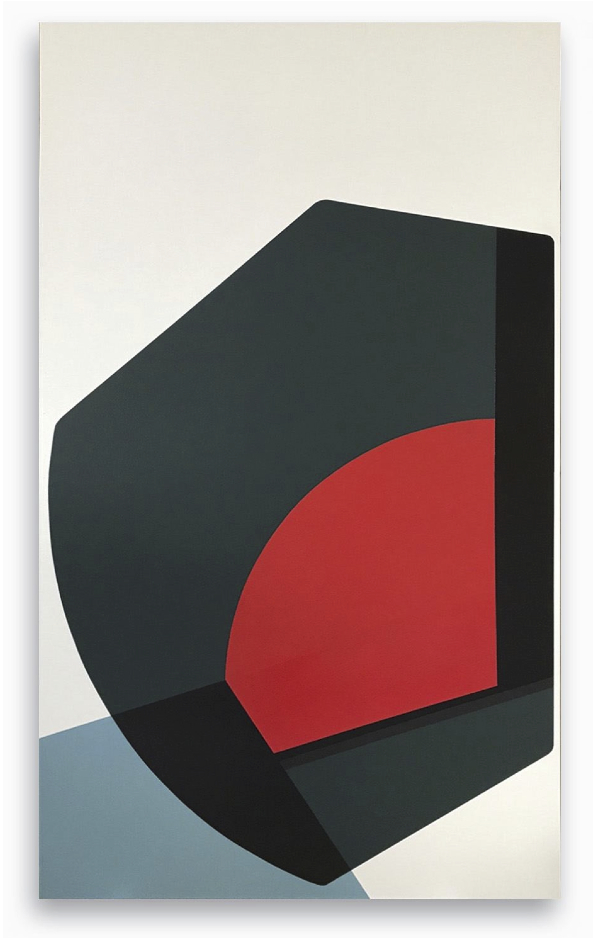 Each of the five artists represented in Audu’s selection employs abstraction in a unique and revelational way, showing the effect of over thirty years of economic globalization in general and on art practices in particular. Serge Alain Nitegeka is a Burundi-born artist living and making art in Johannesburg, South Africa. While there are only two of his paintings in the exhibition, Nitegeka’s work participates in a dialogue with the dynamics of geometric abstract shapes and, in his drama of the manipulation of tilted planes, of geometric, colored shapes engaged in a Constructivist tradition. We can go back to the beginning of the century to the Russian Supremacists and El Lissitsky to find the origins of this work. Much of Nitegeka’s inspiration, the gallery guide explains, comes from a fascination with the built infrastructure of Johannesburg itself, the highways and buildings and basic structure of its urban landscape, in other words, contemporary Africa. He has achieved an international reputation for his large-scale installations.

Equally renowned is the work of Ethiopian artist Elias Sime, whose work echoes the bricolage strategies of many Detroit artists. In pieces composed of reclaimed electronic components — hundreds of cell phones, computer mother-boards, miles of color-coded wires — Simes constructs, with obsessive mastery, complex images of delicate line and color that are metaphorical in thinking about the interconnectivity and dependency of all of our lives on a global scale. They are also quite simply sublime in effect. From his “Tightrope” series, “Tightrope Contrast” is magical. Each of the eighty 8”x12” panels of which it is composed can be read as independent, abstract cartoon landscapes or topographical maps, suggesting an epic tapestry of tangled narratives.

From the same series, “Tightrope: Mobile2,” fiendishly composed of thousands of discarded cell phones, is a giddying delight when one thinks about the millions of voices and words that occurred with these phones and that the sculptural relief represents. It is a triumph in recycling, as well a majestic work of art!

For one gnarly reason, Osi Audu, the curator of the “Abstract Minded,” and Elias Sime have the most amount of work in the exhibition and that reason is the cost of insuring the works of art. Quite simply it is outrageously expensive to bring in and insure many high-profile artists’ works. Nevertheless, and thankfully, Audu and Sime are well represented with four works each. 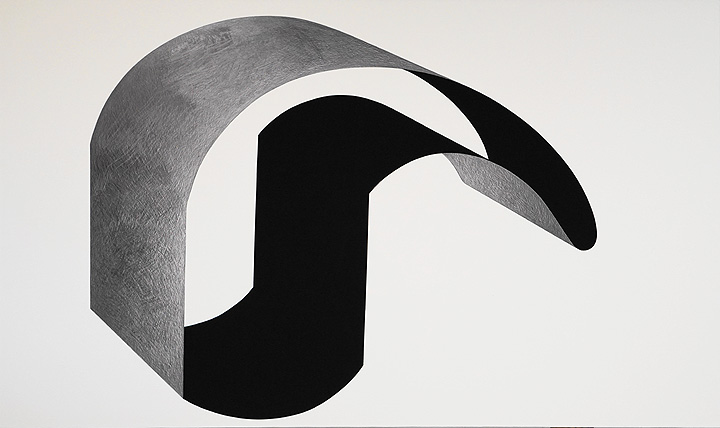 Sime and Nitegeka have focused on the material culture of contemporary Africa — buildings and highways, the technology of cell phones and circuit boards — translating these modern materials into geometric forms in the universal language of abstraction. Osi Audu, on the other hand, in a complex negotiation of the ethnographic history of the Yoruba philosophy, has turned the history of African cosmology back on itself to create conceptual self-portraits. Proceeding from the Yoruba belief in the architecture of the head as a model of the inner and outer head, of the spiritual and physical, Audu has explored African identity through its art. Employing the Ogoni, Benin, and Etsako peoples’ tribal masks, he has used that process of mind, the analytical process of seeing a form called abstraction, to invent alluring new shapes that he calls, without irony, “self-portraits.” In a sense, the process seems to negate the ethnographic reality of African culture on behalf of the currency of the global language of abstraction. However, the forms that have emerged become, in and of themselves, identities. The “Self-Portraits” become logos of the real. Audu’s strategy only succeeds because of their fundamental success as images; as enigmatic shapes, they carry a mysterious presence that is equal to that of the tribal masks themselves. “Self-Portrait: Benin Head,” composed of reflective graphite and light-absorbing black pastel, while carving a unique geometric shape, with a sense of inside and outside, of African spiritual interiority and physical exteriority, diagrams a presence that is complex and elegantly composed. 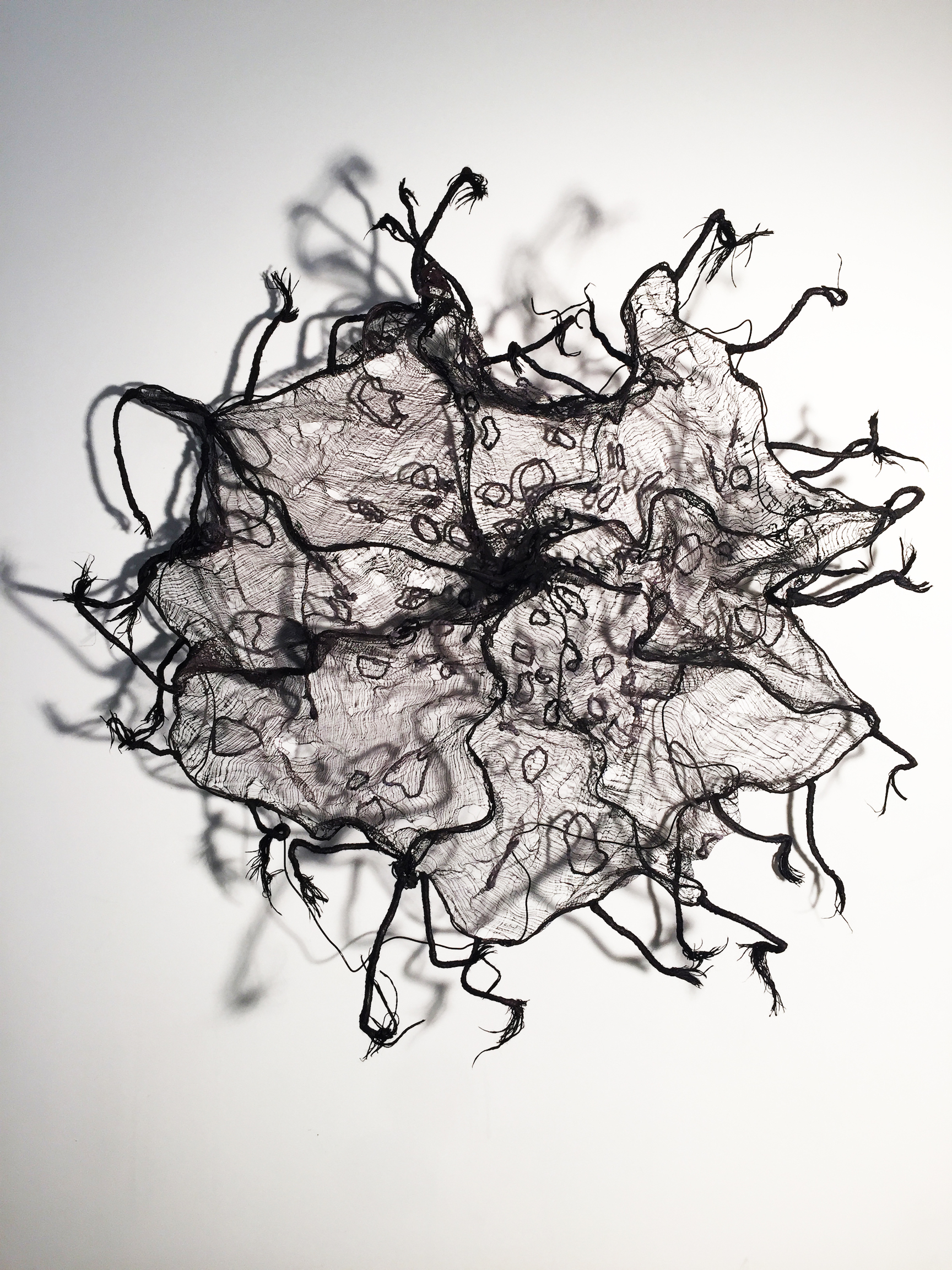 Nigerian artist Nnenna Okore’s remarkable mixed media wall sculptures are composed of found and repurposed materials — threads, buttons, wire — and achieve their presence by mirroring the vital growing processes and unique forms of nature. The delicate webbing in “Threads of Time” inscribes, in the processes of tribal arts, her working hands in the abstract expressionistic process of the image. The braiding, matting, twisting, and weaving — akin to abstract painting’s vigorous expressionistic gestures — all echo tribal hair-style techniques and textile fabrication but simultaneously locate the object in both a cosmopolitan and a tribal landscape. 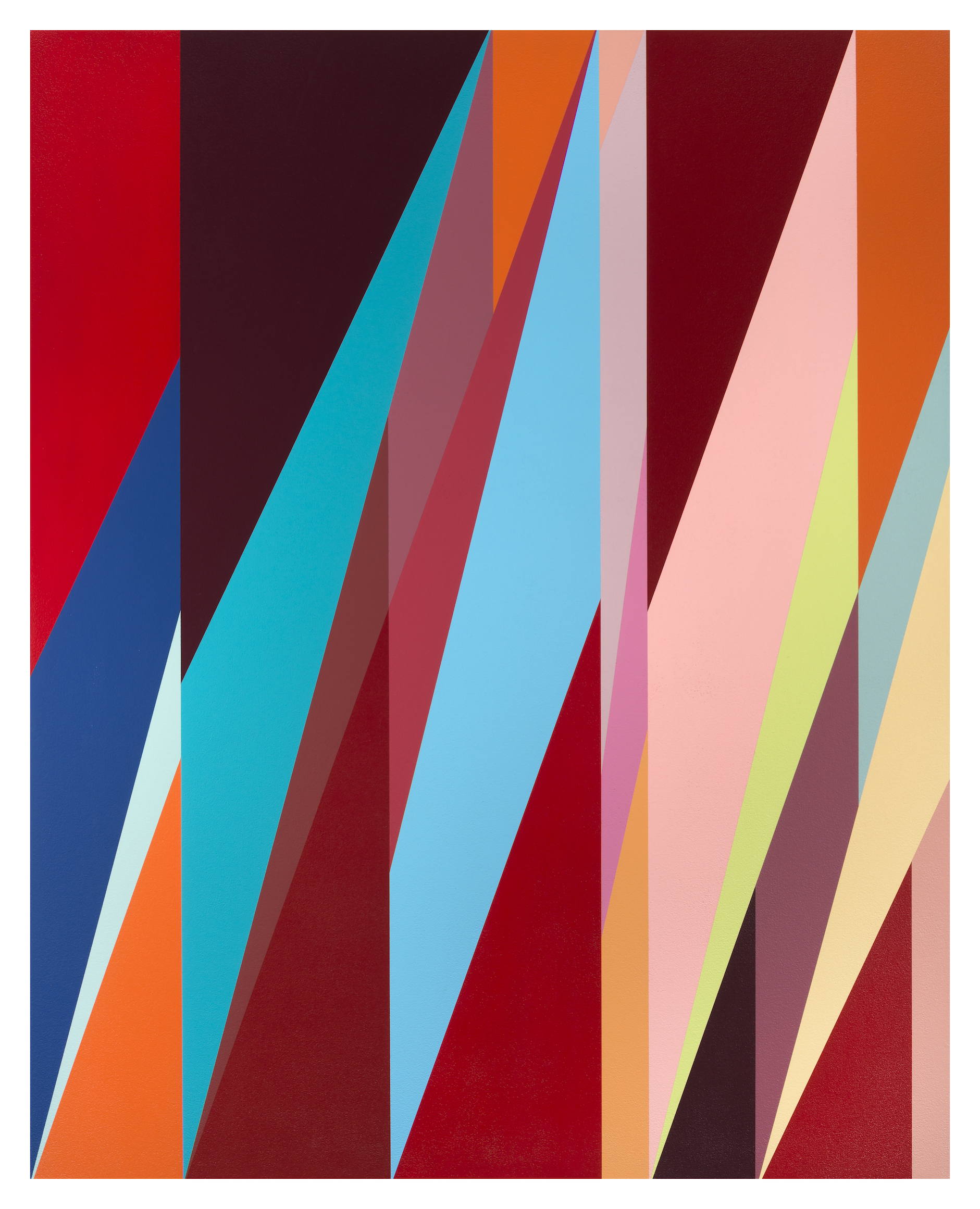 Like Nitegeka’s Constructivist-inspired paintings, we would like to see more than one work by Nigerian-born Odili Donald Odita, but one senses in his painting “Metropolitan” the celebratory vision of interlocking splinters of light and color that are metaphors for the human imagination. And like Nitegeka, he has painted huge architectural installations that, while referencing artists such as Color Field painter Kenneth Noland, are original and awe-inspiring.

Osi Audu’s “Abstract Minded” exhibition places the idea of abstraction not in the tradition of Western art history, but rather in the history of ideas and philosophy. The process of abstraction that he characterizes in contemporary African art is a mode of thought that is fundamental to a worldview, rather than an art history term, and in a very real sense posits Detroit as a site of this dialogue.