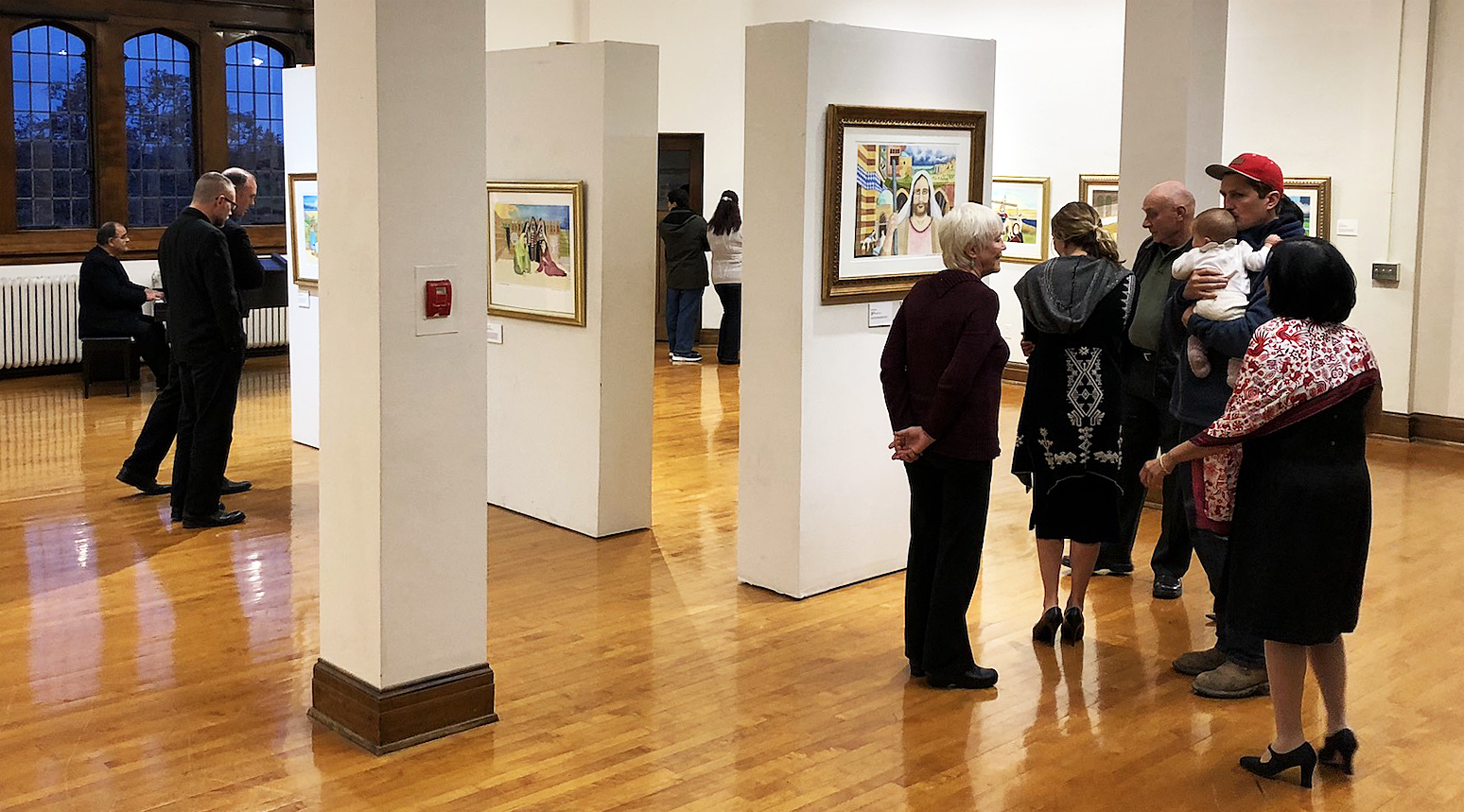 Installation, Events in the Life of Jesus Christ, 2018

The contemporary chasm of indifference on the part of the haute art scene to Western religious art of a devotional nature (Christian art), is absolutely uncrossable to anyone in the world of art patronage and criticism. In rare instances, however, artists themselves have attempted tenuous bridges over that chasm. Georges Rouault managed to achieve recognition as an artist through his powerful images of Christian religious figures. Christian imagery, so long a significant theme of art in our culture has evaporated. The triumph of avant-gardism in a post-Christian secular age is dogma held with neo-religious fervor. In recent decades very few artists of renown have let it be known they might actually be devoutly Catholic. Andy Warhol was quiet about his Catholic faith but daily visited St. Vincent Ferrer Church in Manhattan for Mass or to pray. The cult of celebrity and splintering into theoretical camps keep artists of faith isolated from each other, but hopeful signs appear. There are some artists today who are actively working toward a re-emergence of a serious voice for Christianity in the arts, specifically, the visual arts. Catholic art societies have been established in New York, Chicago, and elsewhere. Artists who are Catholic are answering the call and challenge of St. Pope John Paul II in his “Letter to Artists,” to “enrich the cultural heritage of each nation and of all humanity.”

Ron Scott Teachworth is one such artist.

Mr. Teachworth has an MA from Wayne State University and has for years been an abstract and landscape artist, working primarily in acrylics on canvas and watercolors on paper. It was his encounter with Fra Angelico’s frescos at the San Marco Convent in Florence, Italy, particularly The Annunciation, which compelled Mr. Teachworth to express his own conversion experience through visual art. Beginning with an Annunciation of his own, he painted scenes from the life of Christ, not consciously working toward a series, but desiring to express his own deep allegiance to the Gospel. When his Annunciation was accepted into the juried biennial St. Vincent College Catholic Arts Competition in 2014, Teachworth was greatly encouraged to study the masters’ interpretations of the life of Christ. This effort would culminate in the current series of twenty paintings done over the course of a decade.

The exhibit is in the beautiful Marygrove College Liberal Arts building and is entitled Events in the Life of Jesus Christ. The watercolor paintings chronicling the life of Jesus are commensurate with Teachworth’s spiritual development as a Catholic. The works are an openly sincere expression of the faith that can transform a life by changing the heart. They contain nothing of the modernist’s obligatory irony, or the cynicism brought to bear when dealing with the main theme that formed and informed Western culture for two millennia. They are true, in the sense that they are an honest telling of the Gospel story by someone who believes in that story even now, in the face of brash materialism and hostile disbelief. 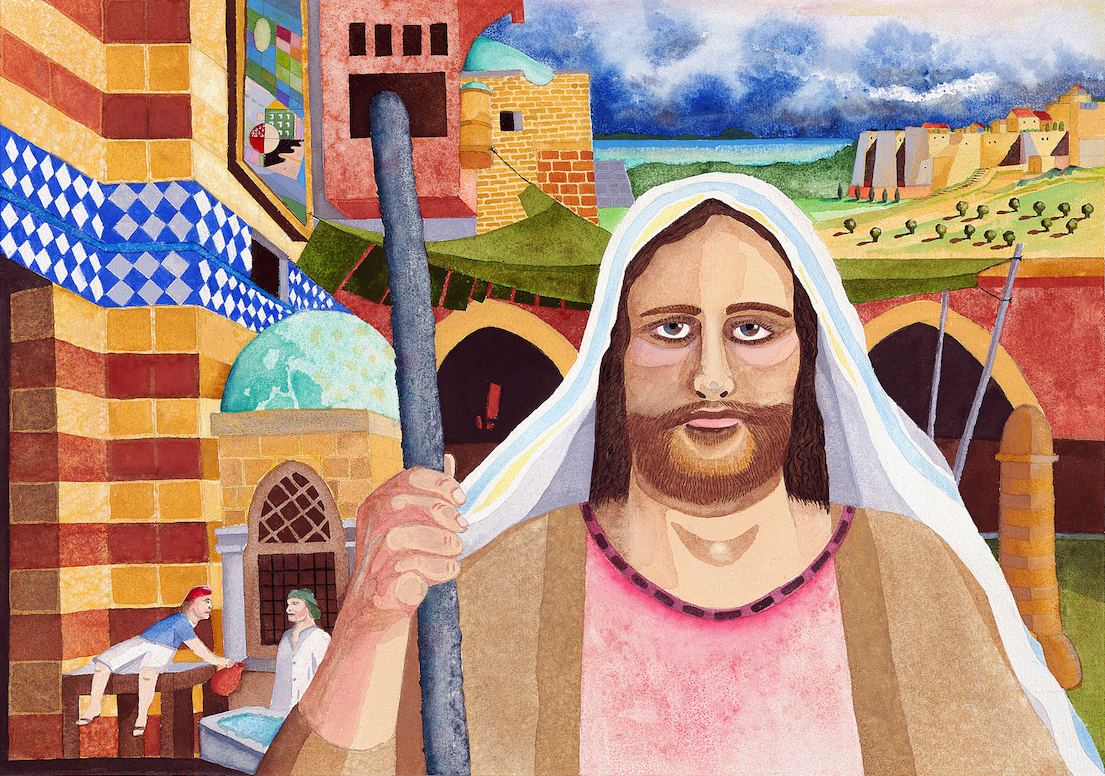 Upon entering the gallery space, one is met with an image entitled simply Jesus Christ, a recent painting (2018) of the mature Man Who’s story we are about to see unfold. Its composition is a fitting introduction to the manner of composition Teachworth employs in all of the paintings. Though the central figure or figures dominate, the backgrounds are always worthy of close scrutiny. They will contain other figures, symbols, buildings and landscapes whose meanings are sometimes obvious, other times open to interpretation. Always they are carefully patterned and painted, conveying a sense of thoughtful devotion to both the craft of the artist and the subject of the work.

Teachworth’s palette is richly chromatic but not overly so. His colors are lively without jarring, and though somber when appropriate, are never dreary. Forms are defined with subtle tones layered or placed next to each other to blend softly, while in other places, edges and values are sharply distinct to define contours; all done with an assurance of purpose. Watercolor can be an extremely difficult medium to control, but Teachworth seems to have accomplished it. The exhibit overall is consistently visually engaging and pleasing to look around at. Each piece shines on its own, and builds on what has come before; it then leads one to go on to the next painting and event in the story. Though done over a period of ten years, the paintings hold together well as a continuous narrative, making for a cohesive series and exhibit.

The majority of the pieces in the exhibit are based on incidents recorded in the Gospels. However, in Mary Visits Jesus, an incident is depicted which is not in the Holy Scriptures. Perhaps because the story is unfamiliar, the painting is all the more intriguing. The figures are shown outdoors. Jesus is shown as a young man at a workbench while His Mother is to the side as if having just entered the scene. Her right hand is on Jesus’ forearm; Her left hand and face seem to express an entreating manner. Jesus’ head is down, bent to His work, though He seems to be aware of His Mother’s presence. There is a river (the Jordan?) behind the figures, and on the other side, a continuous line of buildings indicating a city. 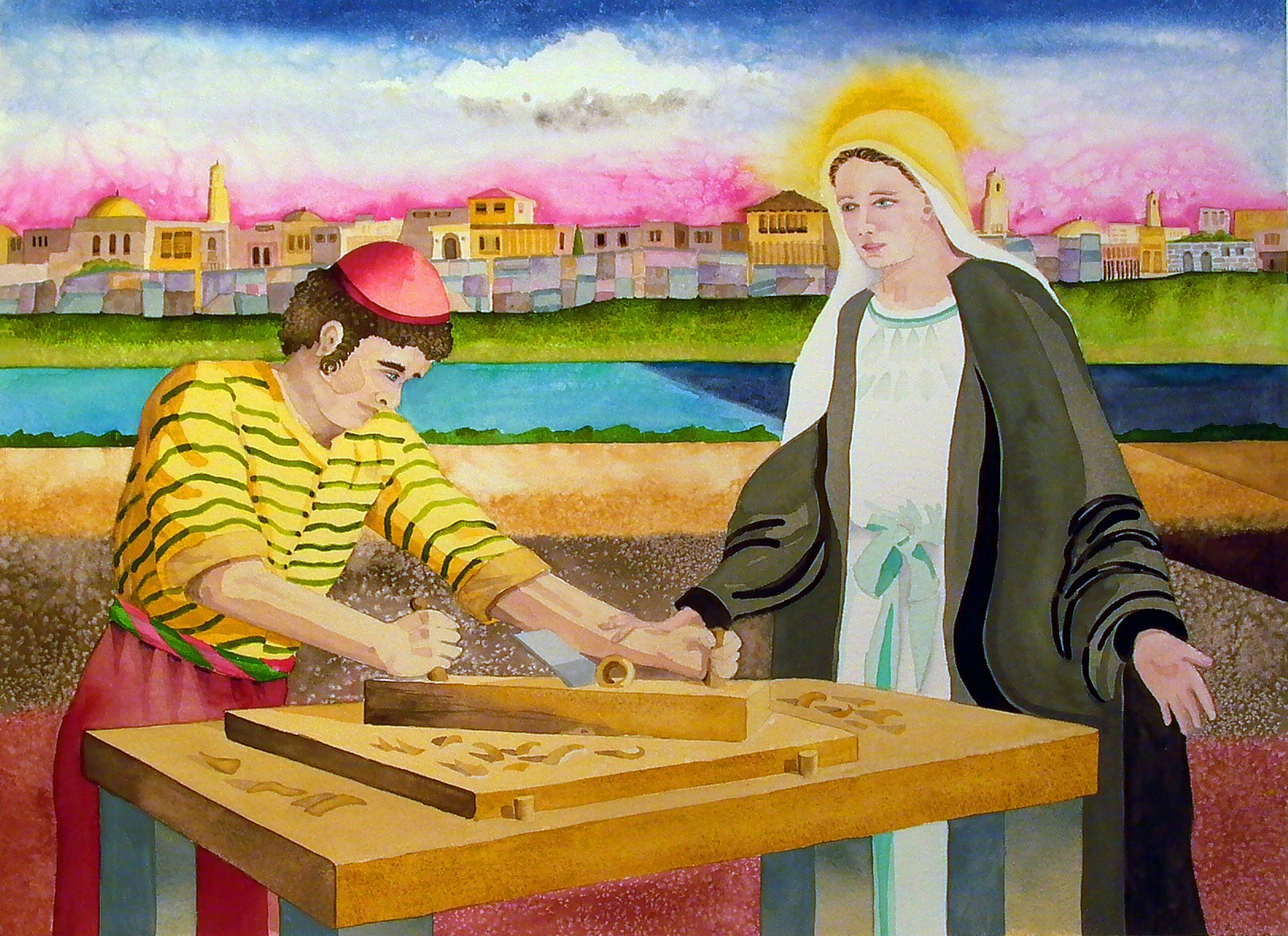 Curiously, it is only Mary who has a halo of golden light around her head. Jesus does not have a halo, only a yarmulke. Does this indicate that she is, for this moment, the one inspired by the Holy Spirit? Is she entreating Her Son to look up from His work to the wider world beyond – across the river to the people who need Him? This is all reminiscent of a scene which is recorded in the Gospel of John, the wedding feast in Cana, when Mary simply informed her Son of a particular need, trusting the outcome completely to Him. 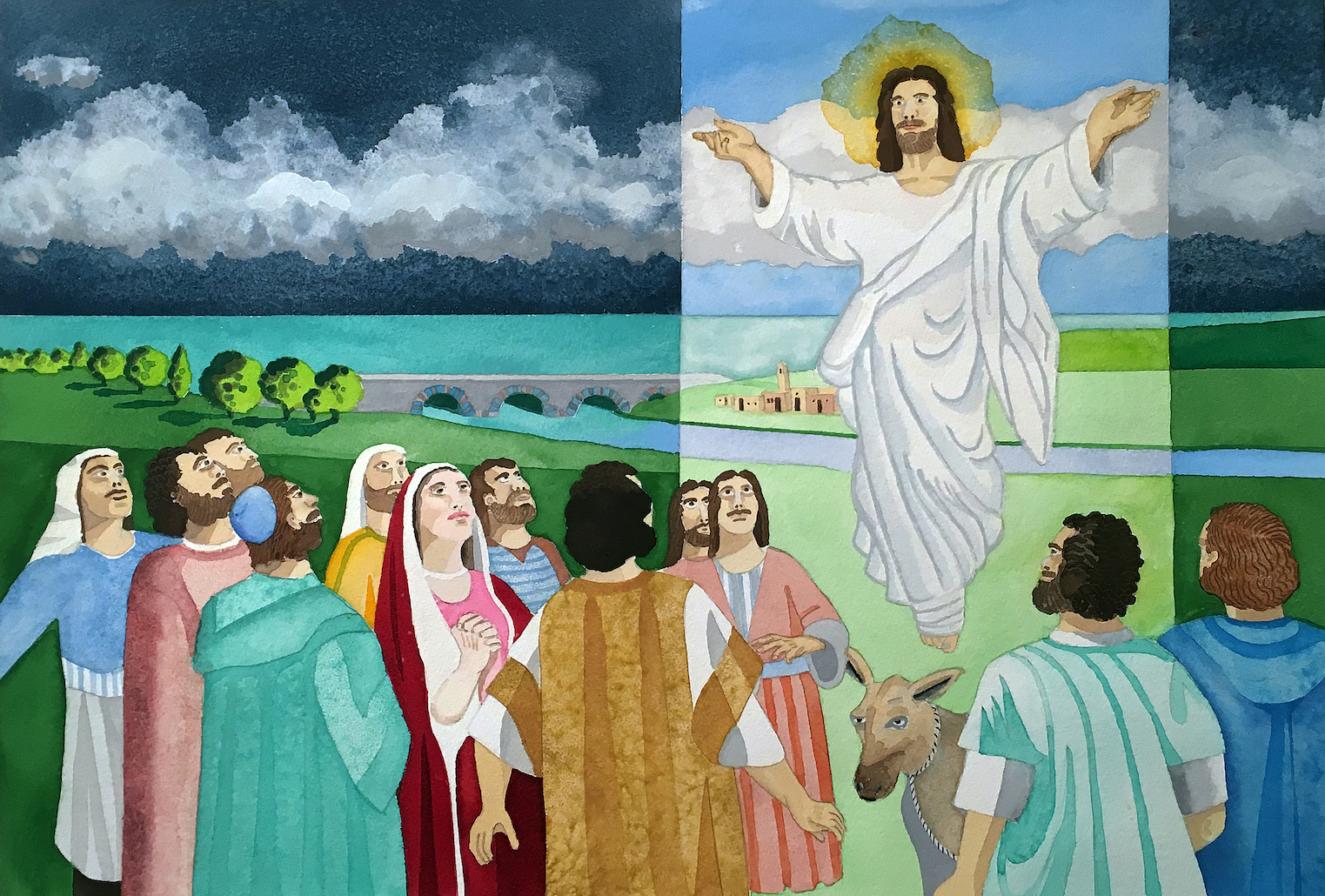 In the Ascension of Jesus Christ, Teachworth demonstrates his graphic design sense to meaningful effect. The figure of Christ and three of His disciples (Peter, James, And John?) are shown enclosed in a column of light. Also in the light is the figure of a donkey, the animal Jesus rode into Jerusalem on Palm Sunday, when the common people hailed Him as their King. Jesus is shown in the air above the three looking up at Him. Is the light surrounding them meant to show the close friendship these three shared with Jesus? The entire group of the disciples and Mary are shown in a peaceful and expansive countryside as they look up to Jesus’ accent. The setting seems to speak of the calm reassurance the followers of Jesus must have felt seeing Him alive again and hearing His promise to “be with them always.” The sky, however, is filled with large cumulous clouds. Could they indicate the storm of persecutions that will break out when this little band upsets the whole world with their preaching of the Gospel of Jesus?

Though it has been denigrated for many years, figurative painting is currently undergoing a strong and widespread resurgence of practice and interest (it has always been an essential component to the expression of the Christian faith.) It is to be hoped this renewal of interest in depicting, and honoring, the highest good of the created order, the image of God in humanity, continues with a vital urgency. Visual art has endured the greatest degradations in the post-modern art world, as compared to other art forms. For most people, contemporary art no longer amuses or befuddles. They simply ignore it. The current art scene serves no purpose in their lives; its products and its heroes appear openly hostile, when not merely aloof. Most people return the favor in kind, and are uninterested in art, or are baldly contemptuous of art world pretentiousness. A new type of artist is needed. One who, while conversant with developments in visual culture, is not enslaved by fashionable trends or blinded by the pursuit of infamy and mammon, but who is a practitioner of lucid visual languages. People have need of a space for contemplation, a window to transcendence, an idea that can uplift, ennoble, and provide relief from the burden of banality. Artists can give that to people.
With this exhibit, Ron Scott Teachworth has taken his place among such artists.