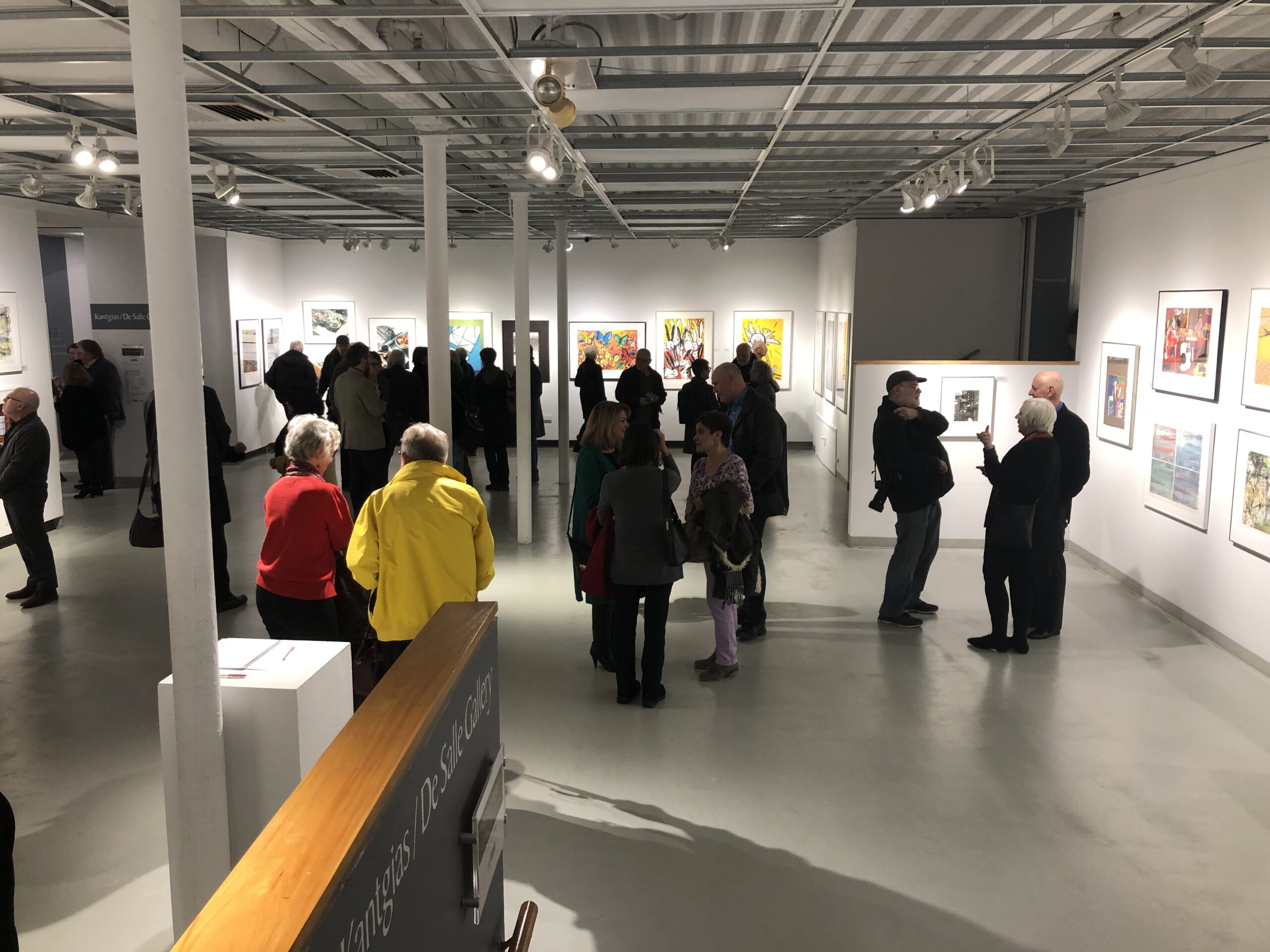 Installation Image, Glimpse: Fine Print Selections from 1980-2020 is on view in the Kantgias-DeSalle Gallery, All images courtesy of Stewart & Stewart

The Birmingham Bloomfield Art Center opens and celebrates forty years of independent printmaking and publishing by Norman and Susan Stewart. Glimpse: Fine Print Selections from 1980-2020 is on view in the Kantgias-DeSalle Gallery.

From the beginning of the 1980 decade, not far off Telegraph and Quarton Road, sets a small bungalow converted from a gardener’s house, once part of the Book Family summer estate, on Wing Lake that would become the studio for the master printer Norman Stewart.  Fresh from his MFA at Cranbrook Academy of Art in 1977, he continued his work as an artist, and began the process of inviting artists to come and reside in the studio to create their editions in printmaking. Likely one of a kind in the country, the renovation included living quarters to the visiting artist leading to a vibrant and productive relationship that would last for many years.

Although there are several exceptions, the majority of work presented by Stewart & Stewart is screenprinting, (occasionally known as “silkscreen,” or “serigraphy”) where ink is pushed through an applied stencil on a stretched fabric frame against the surface of the paper. Sometimes there is only one screen (Martha Diamond, Vignettes) in this exhibition and as many as 32 screens ( Hugh Kepets, Astor and Catherine Kernan, Traversal I) for a single print.  Unlike many other printmaking processes, a press is not required, as screenprinting is essentially stencil printing and usually produced in editions.

Although early roots of screenprinting can be traced to the ancient Orient,  the artistic expression that began in the United States was in the 1930s. Among the earliest were Harry Gottlieb, and Ruth Chaney, that went on to include nationally known artists such as Josef Albers, Bridget Riley, and Andy Warhol. Although we see other printmaking techniques by artists used in this exhibition that include archival pigment prints, relief prints, lithographs, cliche’-verre, and intaglio prints such as etchings and aquatints, none of these execute the kind of cumulative range of modulation, color, and transparency, and surface treatment as thoroughly as the screenprinting process.

Nancy Sojka former curator of Prints and Drawings, Detroit Institute of Arts remarked,  “These prints are a small part of Norm and Susan Stewart’s living legacy which currently stands at more than two hundred editions — excluding additional 100-plus monoprints by several different artists from among the thirty-five with whom they have collaborated. This prodigious body of work could not have been realized without having a bold vision tempered with sound judgment, extremely hard work, good bookkeeping, and a persistently positive outlook. Over the course of these last four decades the Stewarts have remained true to a central guiding principle.” 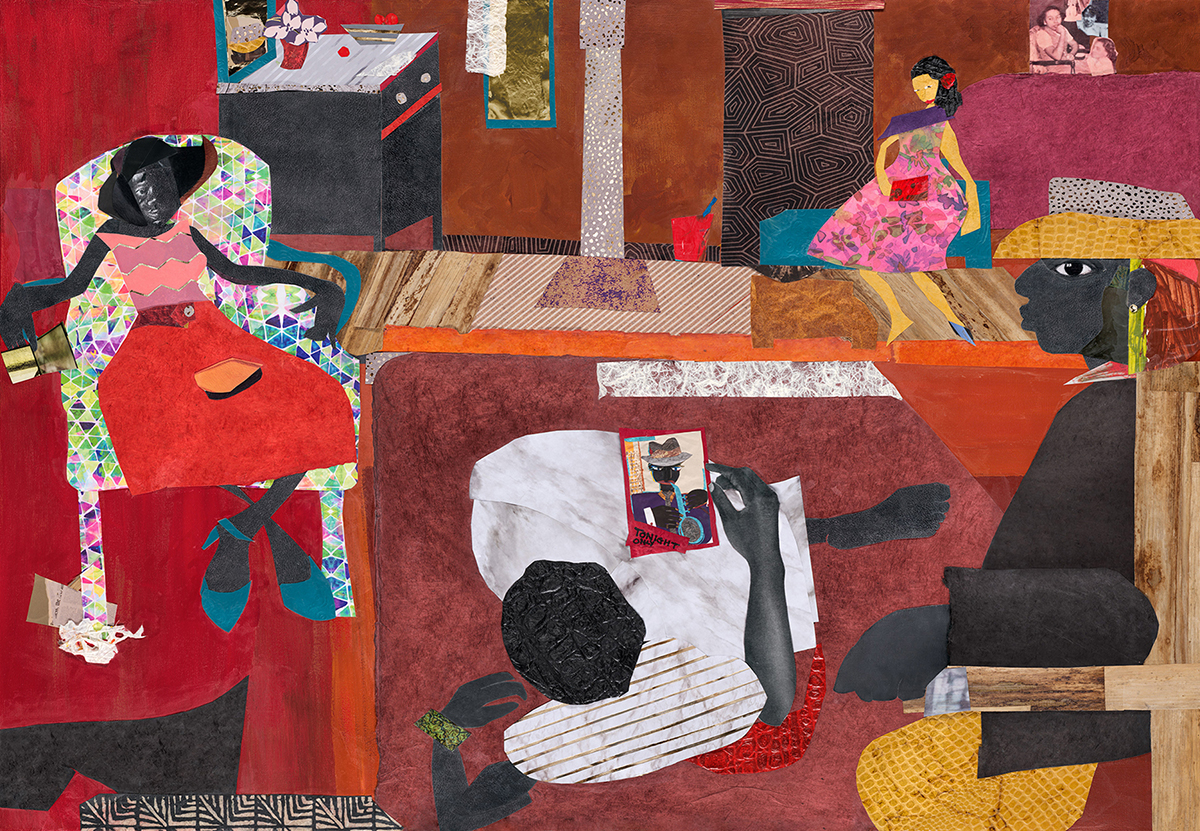 Judy Bowman’s work has arrived on the art scene in Detroit after a hiatus from working as an educator in the Detroit Public School System and raising her family of ten children.  After graduating from high school, she began taking art classes at Spelman College, Atlanta, while adding  classes at Morris Brown College and Clark Atlanta University, majoring in Art.  The large paper collages as in Mary Don’t You Weep,  flatten perspective and call out to Romare Bearden to appear, are reflections on her rich life experiences.  Her focus relies heavily on composition and color, and folk felt subjects that seem to be filled with images of family, relationships, love and faith, and the African American community.  The honesty of Bowman is in full force in these slices of colorful cut and pasted paper. 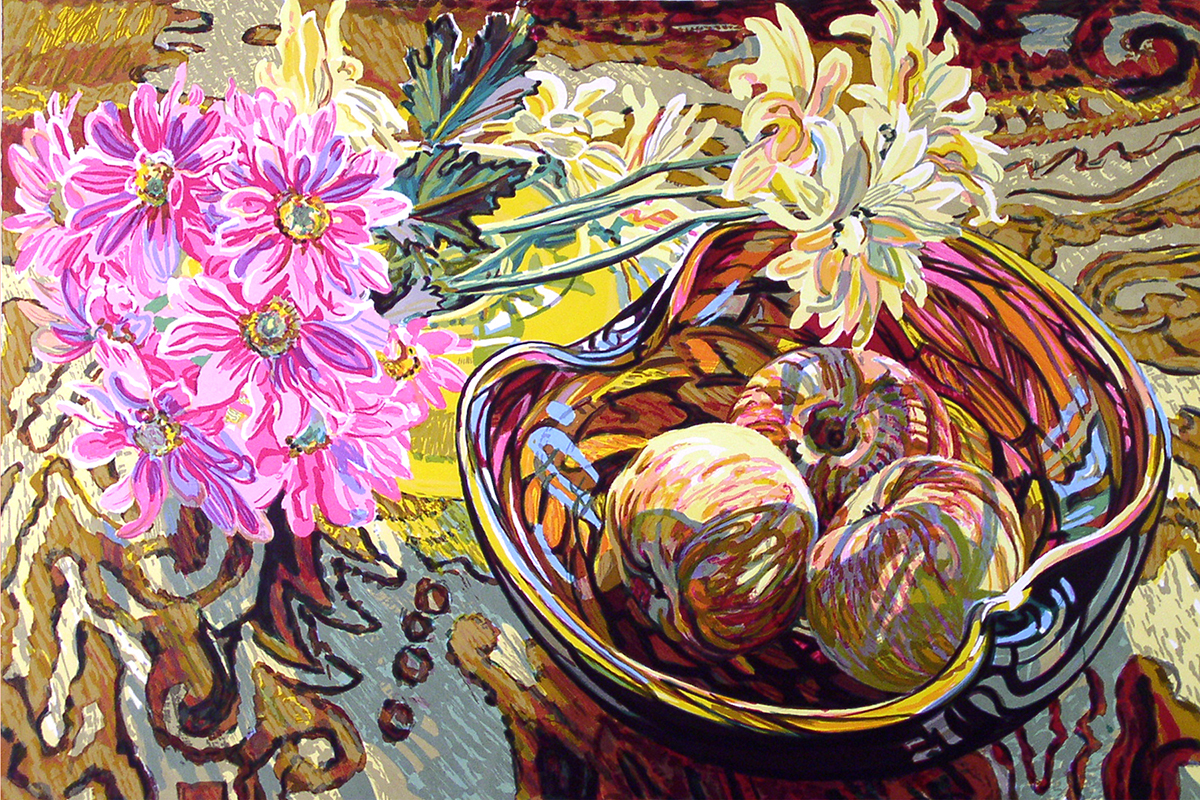 Janet Fish is known primarily for her densely detailed, richly colored, complexly composed still life work often lit with an intensity that matches its informational overload, Fish revels in the delightful inherent contradictions of her elective craft. The objects that serve as armatures for color and light in her work are exuberant in their state of flux.  The conceptual, formal, and iconographic history of the still life genre confirms our own experience.  Fish earned her MFA from Yale in 1963 and is an artist who does oil painting as well as printmaking, lives in New York City, and Middleton Springs VT, and is represented by the DC Moore Gallery. During her evolution, her fellow classmates included Chuck Close, Nancy Graves, Robert Mangold, and Richard Serra. The tight-knit group who formed an intense, ambitious, competitive genus that motivated one another to develop and defend their work. In her work, Leyden, light plays the leading role in both subject and background. Janet Fish created ten fine art screenprint editions in residence at Stewart & Stewart’s Wing Lake Studio starting in 1991, and her impressive body of work included a fine art screenprint edition commissioned by the Detroit Institute of Arts in 1996. 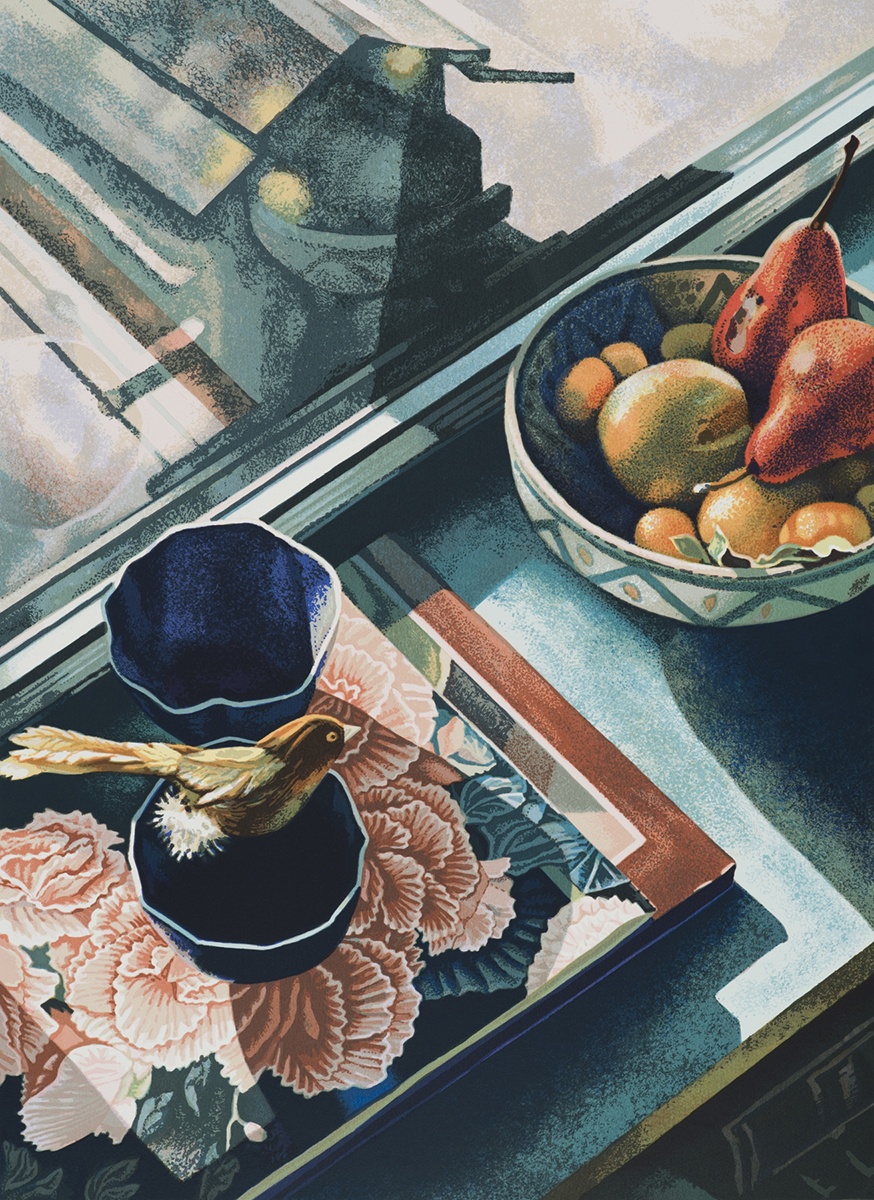 In her work, Ellen’s Window, the 20-color screenprint, looks down from above with this elegant diagonal composition of a bowl of fruit, cups on a tray, and window reflections. She says in her statement, “I make art to wake up, to dream, to understand, to speak to my colleagues, the world. My media includes painting and printmaking.” A nationally recognized painter and printmaker, she has taught at Massachusetts College of Art, UCLA, Rice University, and Hartford Art School; and been a visiting artist at many institutions, including Harvard University and Artist Proof Studio, South Africa. Jane Goldman was born in Dallas, Texas, and earned her B.A. degree from Smith College and M.F.A. from the University of Wisconsin. 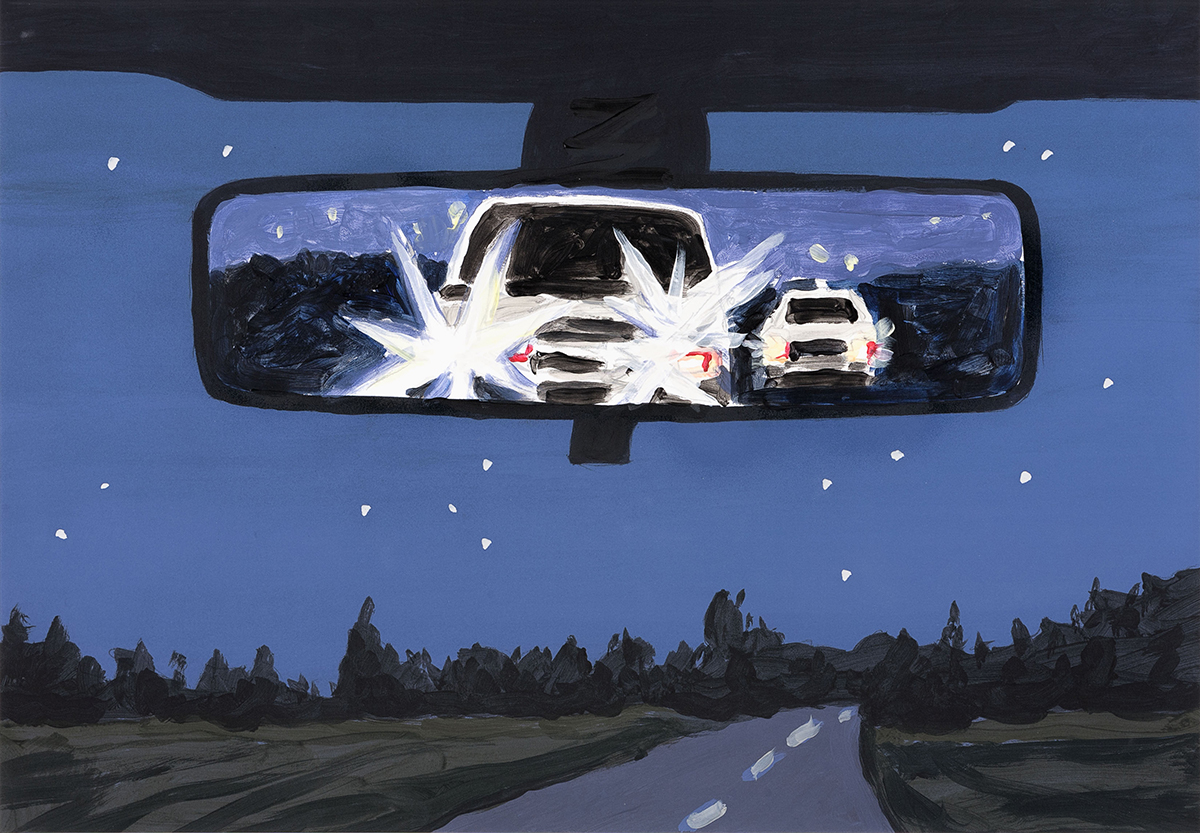 Richard Bosman’s  Rear View Night B, is one monoprint/hand painted, as part of a series of images that include this review view mirror composition. The print image has a naturalistic palette with expressionistic additions of white, pushing toward the viewer with a kind of aggressive intimacy. Over the years, he has a list of themes that have driven the work: Profiles, Copy Cats, Doors, Artist’s Studios, Modern Life, Rough Terrain, American History, and Wilderness.  Bosman was born in Madras, India, in 1944 and raised in Egypt and Australia. He studied at the Byam Shaw School of Painting and Drawing in London from 1965 – 69 and at the New York Studio School from 1969 – 71. Bosman is the recipient of a Guggenheim Fellowship, and his work has been exhibited extensively, including solo shows at numerous international galleries, as well as in group exhibitions at venues including the Museum of Modern Art, the Walker Art Center, the Whitney Museum, and the Brooklyn Museum. The artist lives and works in New York City and Esopus, NY. 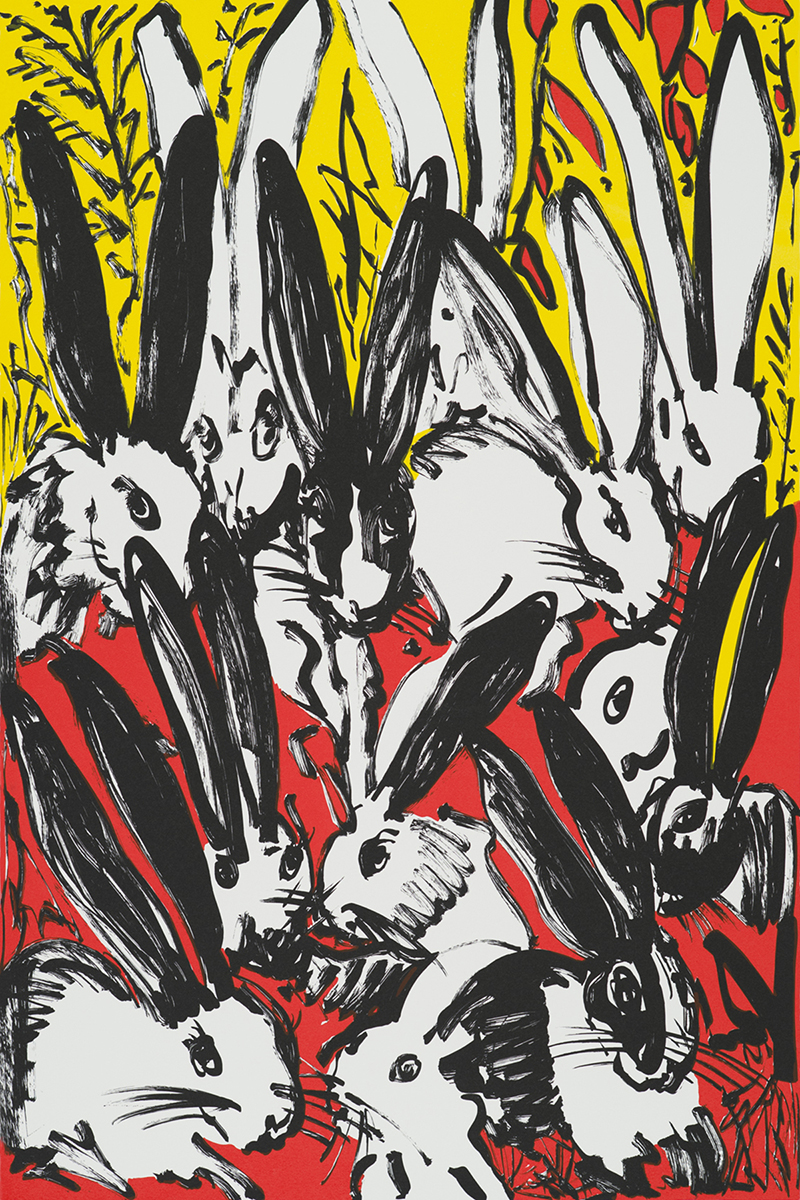 Since 1977, Hunt Slonem has had more than 350 exhibitions at prestigious galleries and museums internationally. His work, Lucky Charm, is just a part of his many portraits of exotic birds, insects, and a variety of animals executed in a loose and expressionistic style that often includes the repetition of bright, colorful images with black outlines. His Neo-Expressionistic paintings of rabbits and tropical birds may be based on his personal aviary.  Slonem says. “But I’m more interested in doing it in the sense of prayer, with repetition… It’s really a form of worship.”  He studied painting at Skowhegan School of Painting & Sculpture in Scowhegan, ME; of Painting & Vanderbilt University in Nashville, TN; and earned a Bachelor of Arts degree from the Tulane University of Louisiana. Slonem’s works can be found in the permanent collections of 250 museums internationally, including the Solomon R. Guggenheim Museum, the Metropolitan Museum of Art, the Whitney Museum of American Art, the New Orleans Museum of Art and the Joan Miro’ Foundation.

Those who specialize in printmaking, understand that there is a close collaboration that is required between an artist and a printer in realizing any print, of course with an occasional artist who works entirely alone based on a specialized set of circumstances. Stewart’s approach is a balance between his own sensibility and that of the artist supporting the creative thought and conception with the technical sequence required by the process.  The outcome is a paradoxical blend of formal and non-formal elements that the viewer reads simultaneously. The appearance of around the clock ease masks the strenuous work, complex technical skill, and long hours that actually define the activities of the artists.  Stewart, often accompanied by assistants, has brought hundreds of new editions and monoprints, into being for the last forty years.

Stewart & Stewart has published an on-line catalog:  Collaboration in Print, now available at StewartStewart.com to read and/or download for later reference.

Each artist name in this exhibition and catalog has a link to his/her images and biography.

The  Birmingham Bloomfield Art Center’s exhibition  Glimpse, produced by Stewart & Stewart now runs through June 18, 2020 by appointment.  Simply call the BBAC at 248.644.0866 in advance of your planned visit.