Where do Black people go during times fraught with pain and sorrow?

Peter Williams’ query is one with a storied lineage within the Black community. Over the course of 45 years, Williams, a senior professor of painting at the University of Delaware with time spent in the Detroit arts community and as a professor at Wayne State University, has tackled problematic social structures of white supremacy and discrimination with uncensored perspectives. Curious and inquisitive, he is often in a state of mental travel and critical culture investigation within his practice.

These themes set the foundation of Peter Williams: Black Universe, an Afro-futuristic narrative that takes the viewer on a journey through consciousness and pursuit of a better life. Within this universe, Williams creates a melanated race who travels to outer space with hopes to discover new planet homes and an end to systemic constructs of oppression, racism and injustice.

Co-curated by Larry Ossei-Mensah and Rebecca Mazzei, Peter Williams: Black Universe exhibits at Trinosophes and Museum of Contemporary Art Detroit (MOCAD) through January 21, 2021. The installation is experimental and actively fuses abstract strokes with contemporary figuration. Narration and Transitions at Trinosophes begins as a meditation. Its energizing colors, use of repetition and symmetric designs flirt with sensuality, sarcasm, spirituality and identity. Through use of abstraction, Mazzei notes that the viewer is experiencing a “painter’s painter” working through ideas and experiments that create space to sort through ideas. 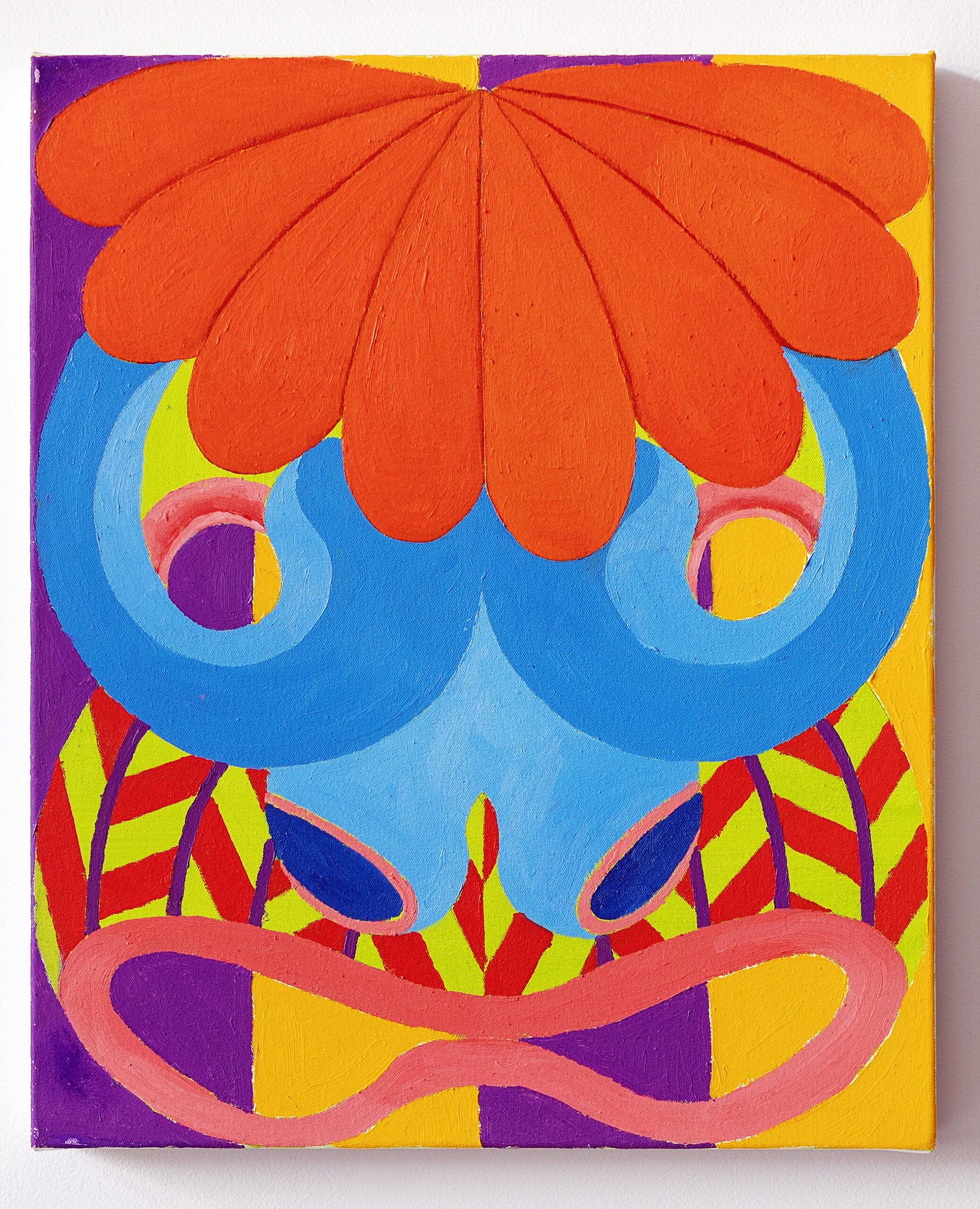 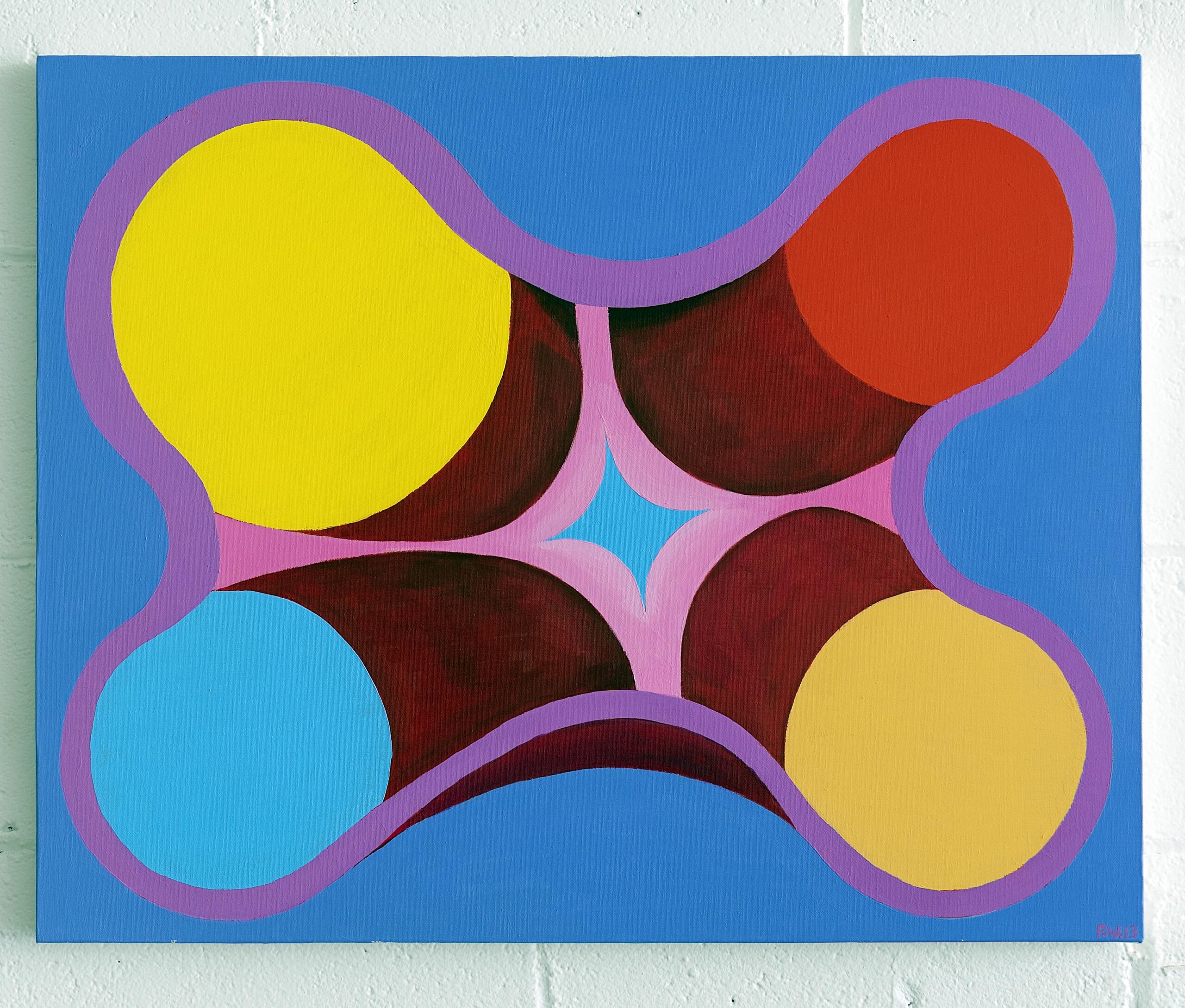 Bird Man closes Narration and Transitions. The active piece steers from the serene and transitions to dark humor and an evolving narrative. The larger canvas preludes Williams’ Black Exodus suite of paintings on view at MOCAD. The figurative composition is a self-portrait of the artist after a major surgery. A bit disoriented, the subject sits, appearing unbothered, in the middle of the frame with a dragon devouring his slumped body. Movement seems to be controlled by the wizardry figure in the lower right corner raising its wand. This sense of energy and twist on a thematic composition that could be viewed as defeat, may be informing what’s to come. 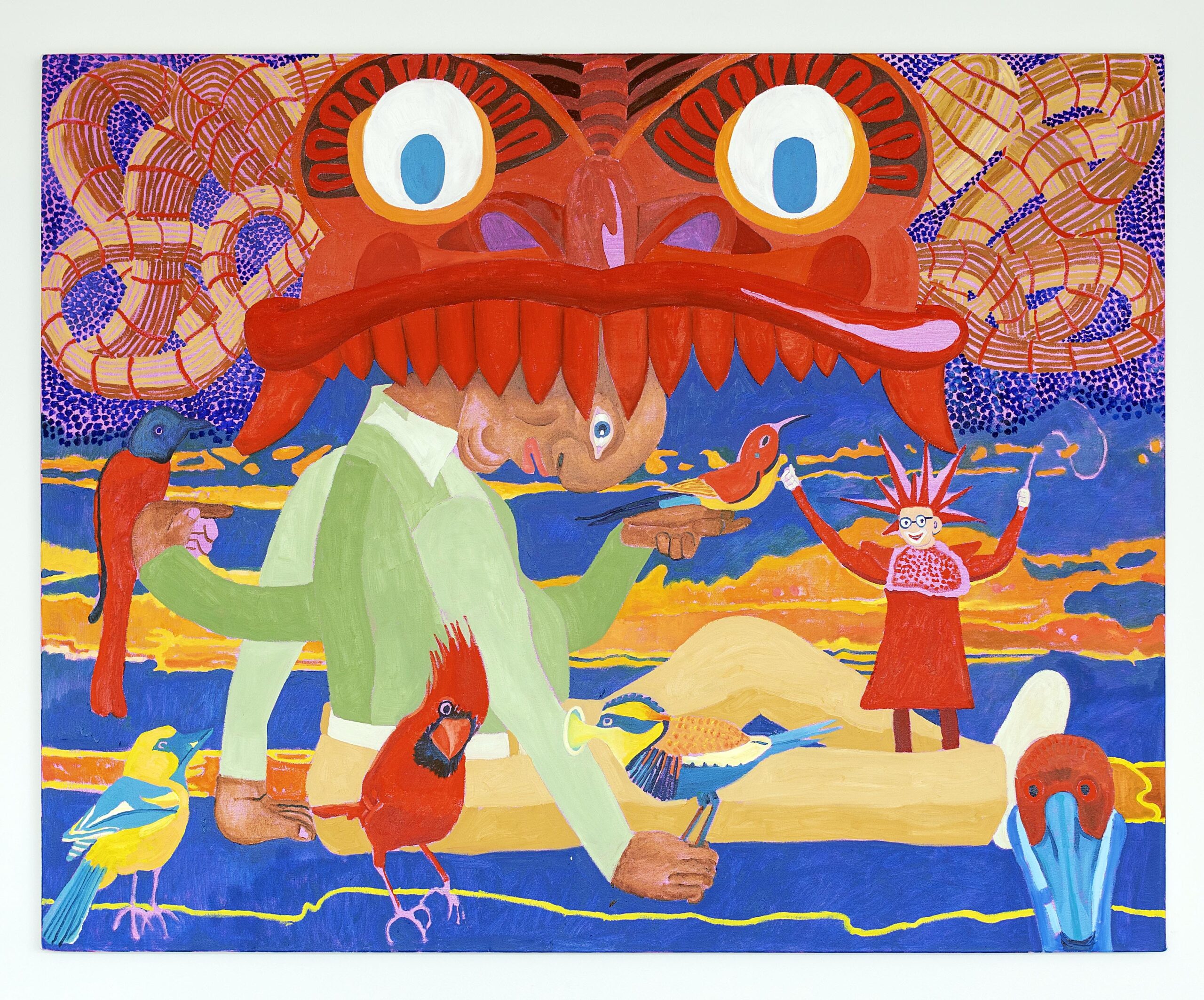 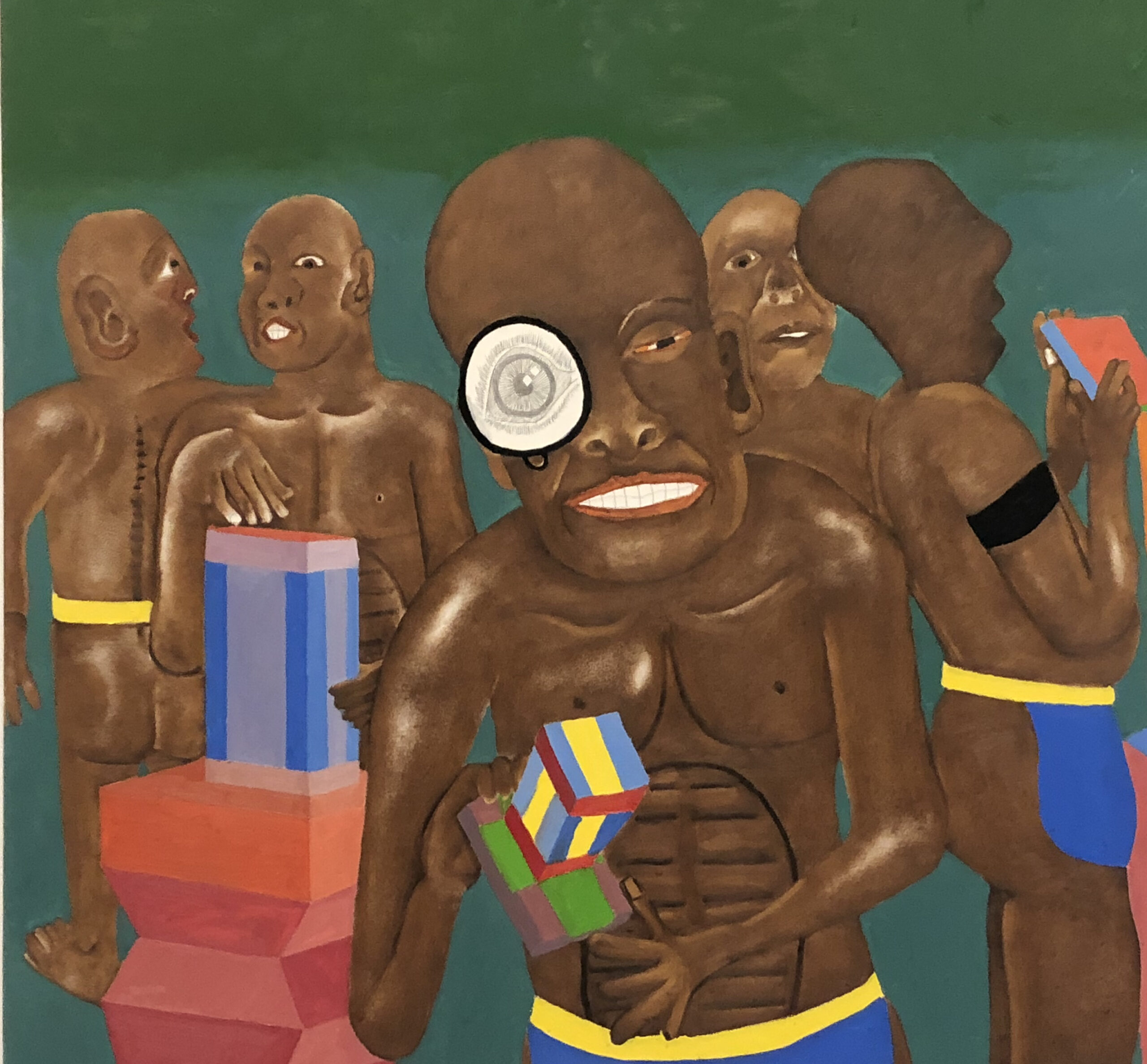 MOCAD’s Black Exodus gets to the gristle of the narrative using color as a luring factor toward bigger ideas and societal confrontations on large canvas. Here, Williams uses dark humor, allegory, art history, and witty satire as a way to challenge us to confront the truths about society and ourselves.

In Spectacle, blackness is on display. The tone is blunt and touches on the eerie and invasive feeling of being watched and observed. The figures are constructing the building blocks of their new alien planet. Wearing garments from historical myths, they have a heightened awareness of their surroundings but make no effort to perform, if you will, or oblige the onlookers’ expectation for something to happen. The last laugh, however, is owned by the “spectacle” with his sharp, hard gaze refocusing the lens by peering through a monocle implying a shared curiosity and the discomfort of surveillance. 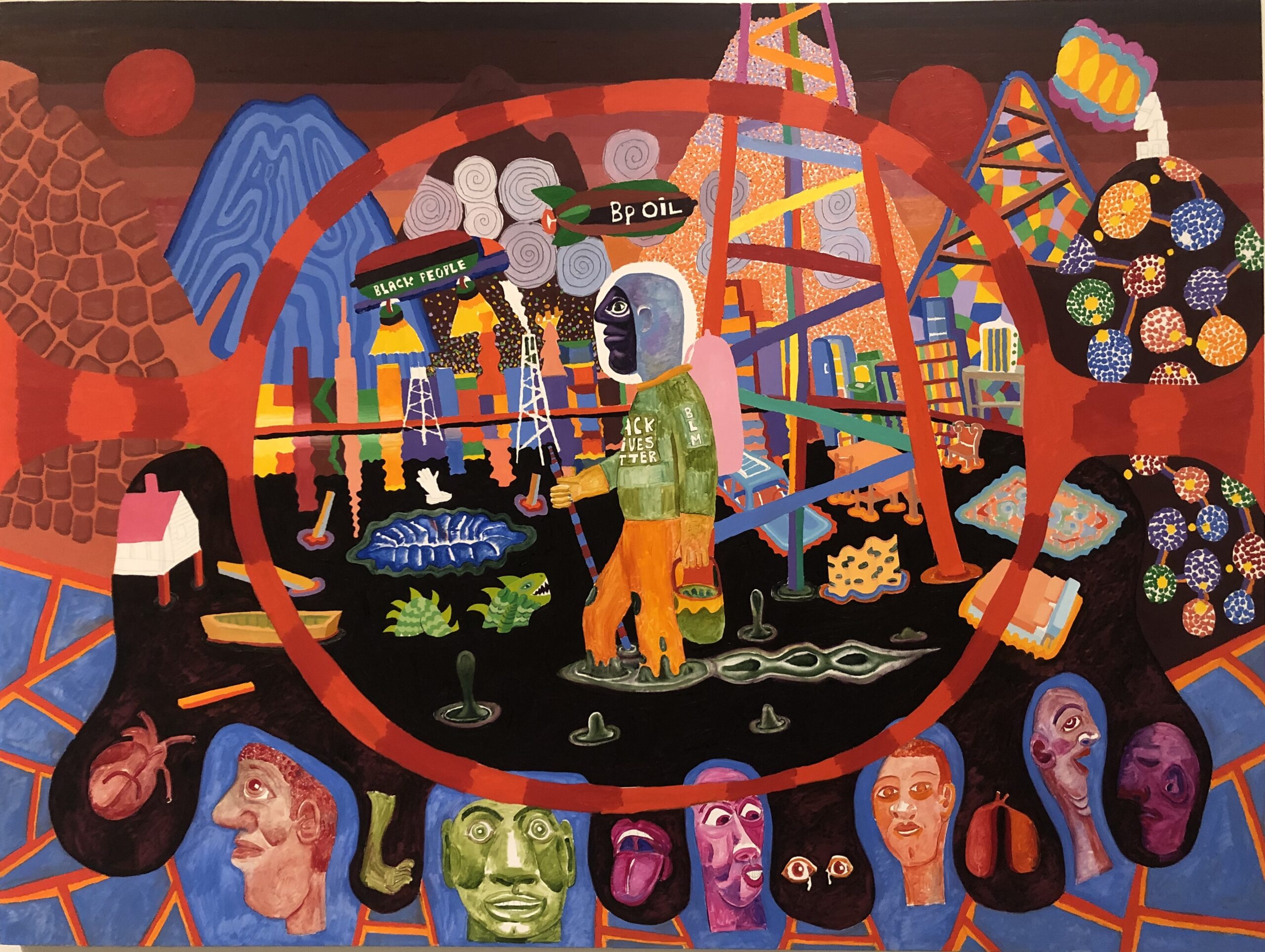 Ossei-Mensah worked with Williams in 2018, for a show at the CUE Art Foundation, and speaks to the allure of Williams’ knowledge and experimentation with color theory. “It’s a common place to enter while suggesting that you spend more time not only looking at the full picture composition but paying attention to the details,” he says. “These are the little norms that I think make Peter such an incredible, not only artist but just a thinker reflecting on the Black experience.” 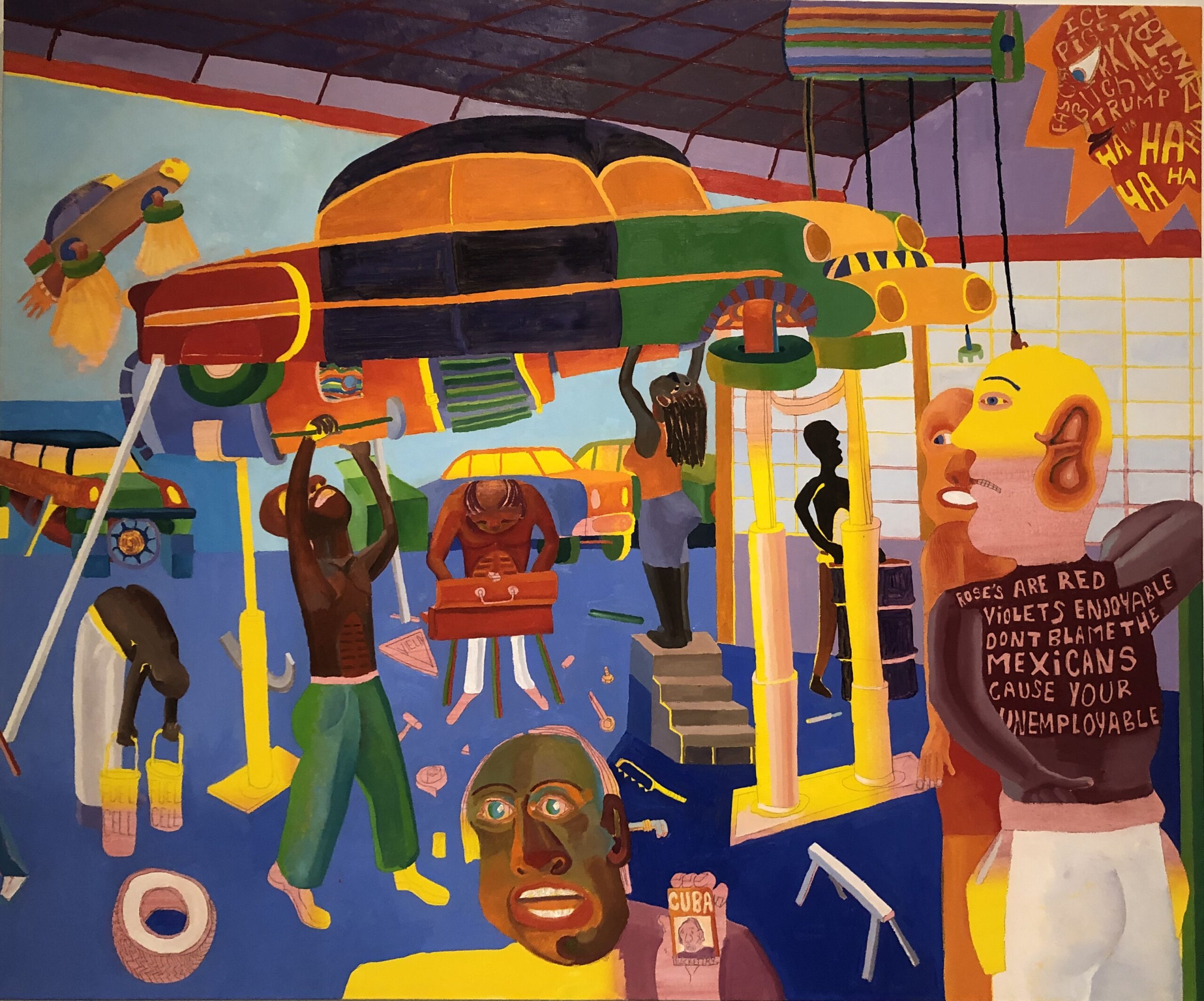 The central element in Black People’s Oil  is the figure trudging through swamp-like oil in a spacesuit emblazoned with ‘Black Lives Matter’ on the front and the letters ‘B L M’ scrolled on the arm of the suit. A ‘BP Oil’ blimp flies above, likely referencing the 2010 oil spill that deeply affected the Gulf of Mexico and another flying car resembling the Pan African flag reads ‘Black People.’ A goggle lens frames the Black figure in the space suit. The piece is a complex visual suggesting routes of escape, but also questioning if that means something better or the type of desired difference that alleviates one from oppression and despair.

Rockettry doesn’t answer that but serves as a call to action. Here, Williams paints a community of people working together to build their mode of transportation and way out of a corrupt and disastrous planet. Car parts and tools are scattered, men and women work individually and collaboratively on vehicles. There’s a lot of  movement on canvas that offers commentary on the inventiveness that can be birthed within a confined environment. The details are pivotal as Ossei-Mensah references. Notice the brown man slumped over holding cans of fuel cell,  another holding his Cuba identification card, and a  community member wearing a shirt that reads: Roses are red/violets enjoyable/don’t blame the Mexicans cause your unemployable. In the upper right corner, a burnt orange, sun-like shape overlooks the community working to create a way out, but this is not a beam of light. The words: Fascist, Pigs, KKK, FBI, Lies, Bitch, Ice, Trump with multiple HaHas are carved on the figure. The community continues on their mission.

I Fell From the Sky references the history of painting the human form. We see astronauts floating in a “suspended state of consciousness” and uncertainty regarding their future – a testament to the present day in the midst of a global health pandemic,  hyper-visible racial and political tensions. The astronauts hands are  covered with white gloves, referencing the minstrel show and television shows illustrating Black people as cartoon buffoons. The visual statement traces a traumatic past that has seeped into mainstream consciousness in various forms from  — some of which holding such an aesthetic appeal the foundational roots have been obstructed from memory or a desire to know. But Williams doesn’t paint frivolously. History is significant even while the artist deciphers thoughts and colliding worlds.

The figure at the core of the canvas is flying in a space suit designed with stitches of Kente cloth – an homage to Ghana in West Africa. The symbolism here is communication. Gold articulates status and serenity; yellow is fertility; green speaks to renewal; blue aligns with spirit and harmony; red is passion and black represents a union with ancestors and spiritual awareness. These elements arrive in the conscious state, perhaps serving as a guided language for Williams while conceptualizing the series and dialogue that discusses the Black experience. 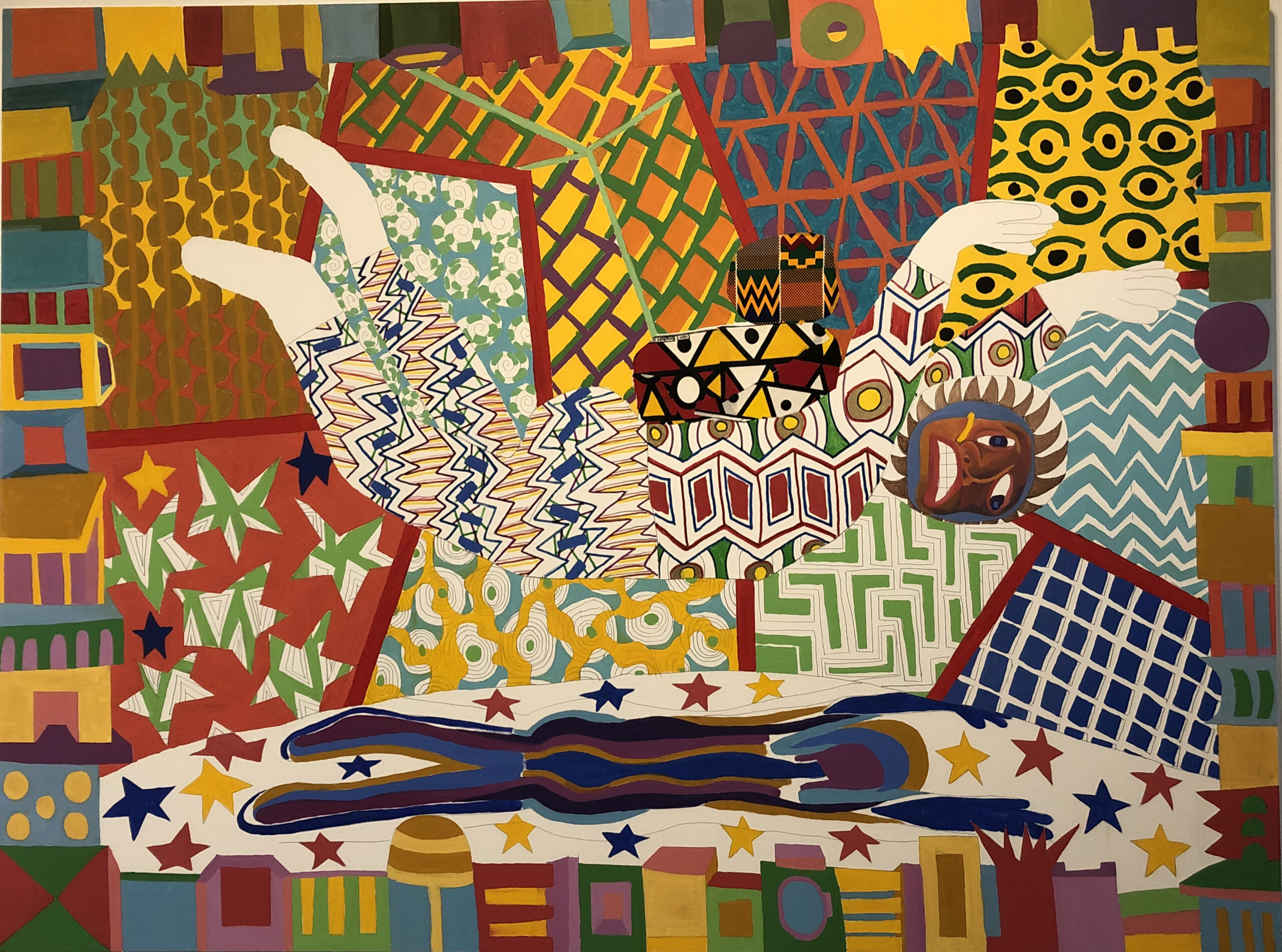 Peter Williams is an educator and artist with the condition of Black lives always at the forefront of his creative transport. In Black Universe, we journey along an experiential thinker and conversationalist en route to another world within and beyond the known. He extends the invitation to use your imagination when digesting the complexity of his works and exploring how to come to terms with the world that presently exists. The solution does not rest in escapism that suggests something new is better, but the power to choose and decide how to make the lives we lead on this planet our version of utopia.