The insertion of a work of art into the public sphere through mass media means is a dictum of Chicago-based Nigerian American visual artist Adeshola Makinde, who began his career as a self-taught practitioner three years. Having established the framework of a photomontage artist, “collage commissions” such as “the beauty is…FEEL STRONGER TOGETHER!,” 2020, executed for Nike, or “A year on from George Floyd: how laws allow police to use fatal force,” an illustration for a news report by the Guardian, recombine text and images from various print and media outlets into an art of political messaging that lacks ambiguity.

Designing work for reproducibility in the urban sphere, Makinde garnered public attention in Detroit in 2019 with a text-only black and white highway advertisement on W. Warren Avenue and Wesson Street. The rented billboard featured a found political slogan from the Civil Rights era, “We demand an end to police brutality now!,” writ large in white capital letters on a solid black backdrop, situated opposite a Coca-Cola bottling warehouse on the other side of the street. 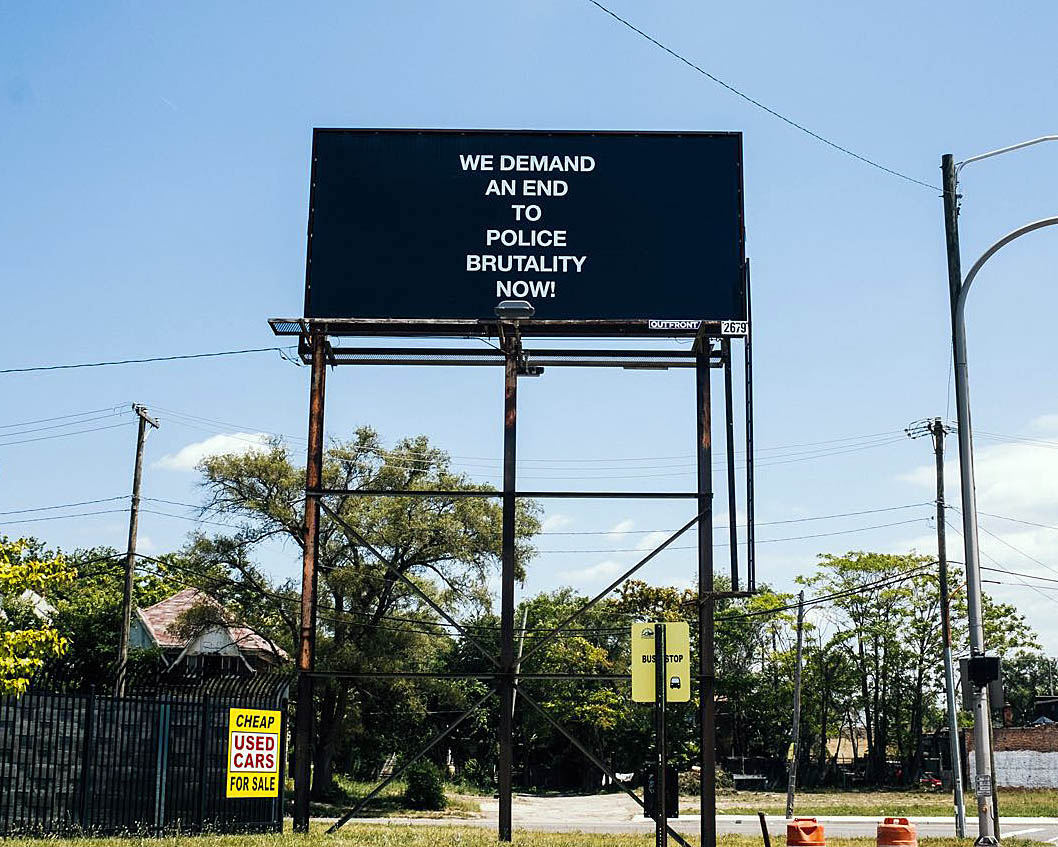 As is well known, during the mid-to-late 1960s conceptual artists began to respond critically to how institutions shape our daily lives by incorporating language into art. Makinde’s practice extends some of conceptual art’s presuppositions, namely that art as text can be distributed anywhere: in fashion magazines, on walls, like advertising, in bus stops, or in social media contexts, in attempts to reach a wider non-art and art audience alike. A turn to language in visual art challenged the very nature of art, altered its appearance, often accompanied by a strategic insertion of text into commercial circuits of distribution. As part of a nationwide campaign with 29 billboards in 22 cities, “We demand an end to police brutality!” was accompanied by additional political slogans such as “We protest school segregation,” “Black power,” and “Free all political prisoners.” In this series, Makinde shifts a personal expression of street protest into a commercial context to broadcast messages of discontent even louder. To bring found Civil Rights era slogans into the context of art also pays attention to the work we do with words when we protest.

This becomes particularly evident in his recent solo show at Playground Detroit which shifts the premise of the billboard project into the space of an art gallery by working with text silkscreened onto canvas. Aptly titled RELEVANT by local curator Juana Williams, the exhibition makes a strong case for the continued relevance of a fight for social justice. As racial oppression has deep roots in U.S. history, the struggle for civil rights and racial equality began decades before the 1960s and it continues to this day. The timely exhibition incorporates the sentences from the billboard campaign into a plethora of twenty-eight political slogans, all of which stem from the Civil Rights era transcribed by Makinde off banners and hand-held placard signs seen in historical photographs of street demonstrations from the 1960s. 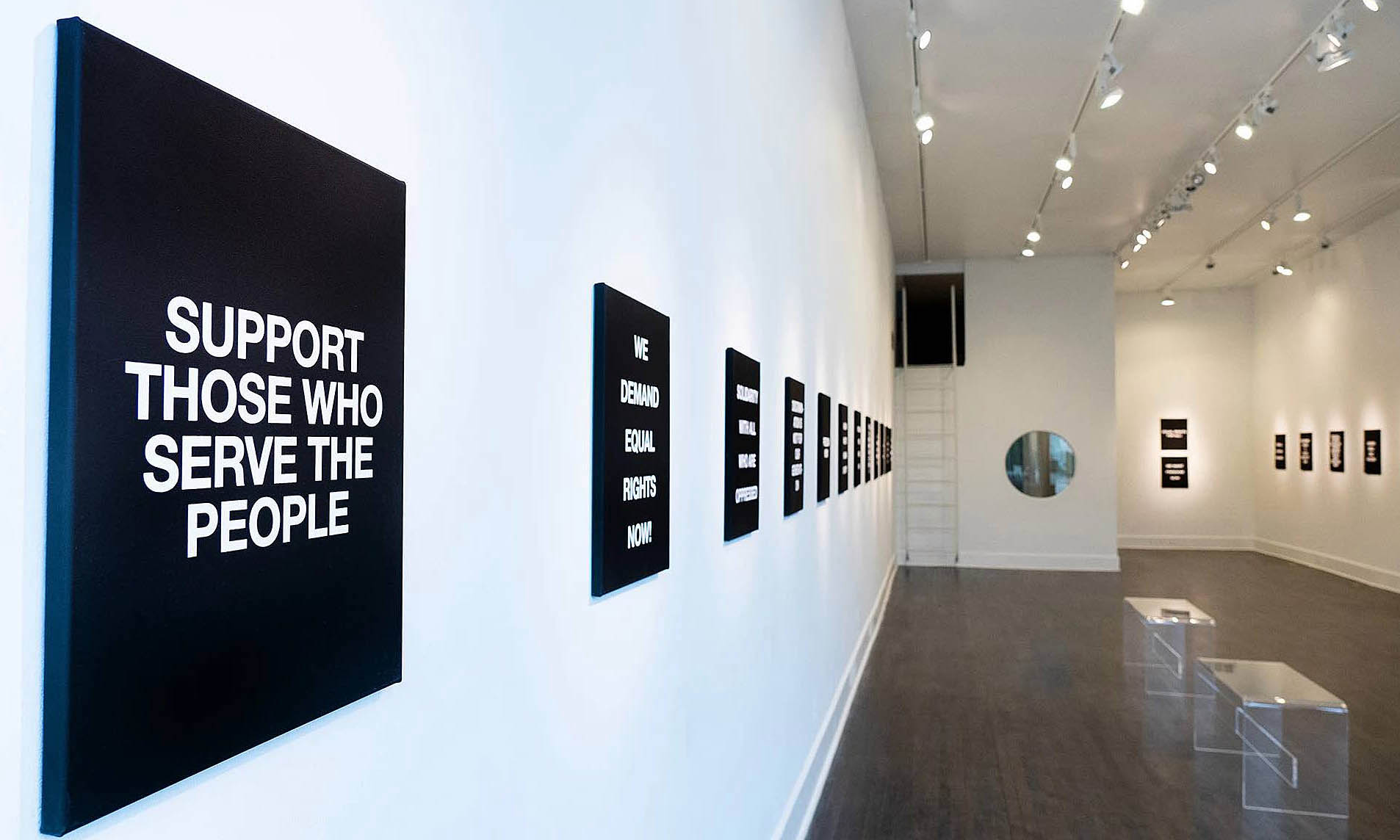 Upon entry into the long rectangular exhibition space on Gratiot Avenue near Eastern Market, on the left wall one can read “Support those who serve the people” and “We demand equal rights now!”. Text in white, sans serif capital lettering, is printed onto identically sized 16 x 20-inch black canvases. As an expression of protest and discontent, often without the backing of powerful institutions, letting your voice be heard is most effective in simple, concise, bold, and repeatable words. Makinde’s design choice echoes that typefaces in protest signs are often without a serif at the end of a stroke, set in capital letters, and feature a mono weight letter style without thick and thin line transitions as they ought to compete for attention in a crowded street or media space. The canvas fabric is neatly pulled around the edges of the stretcher so that the pictorial work takes on an object dimension. The wall on the opposite side of the room features the phrases “All power to the people,” “We shall overcome,” and “Equal opportunity and human dignity.” 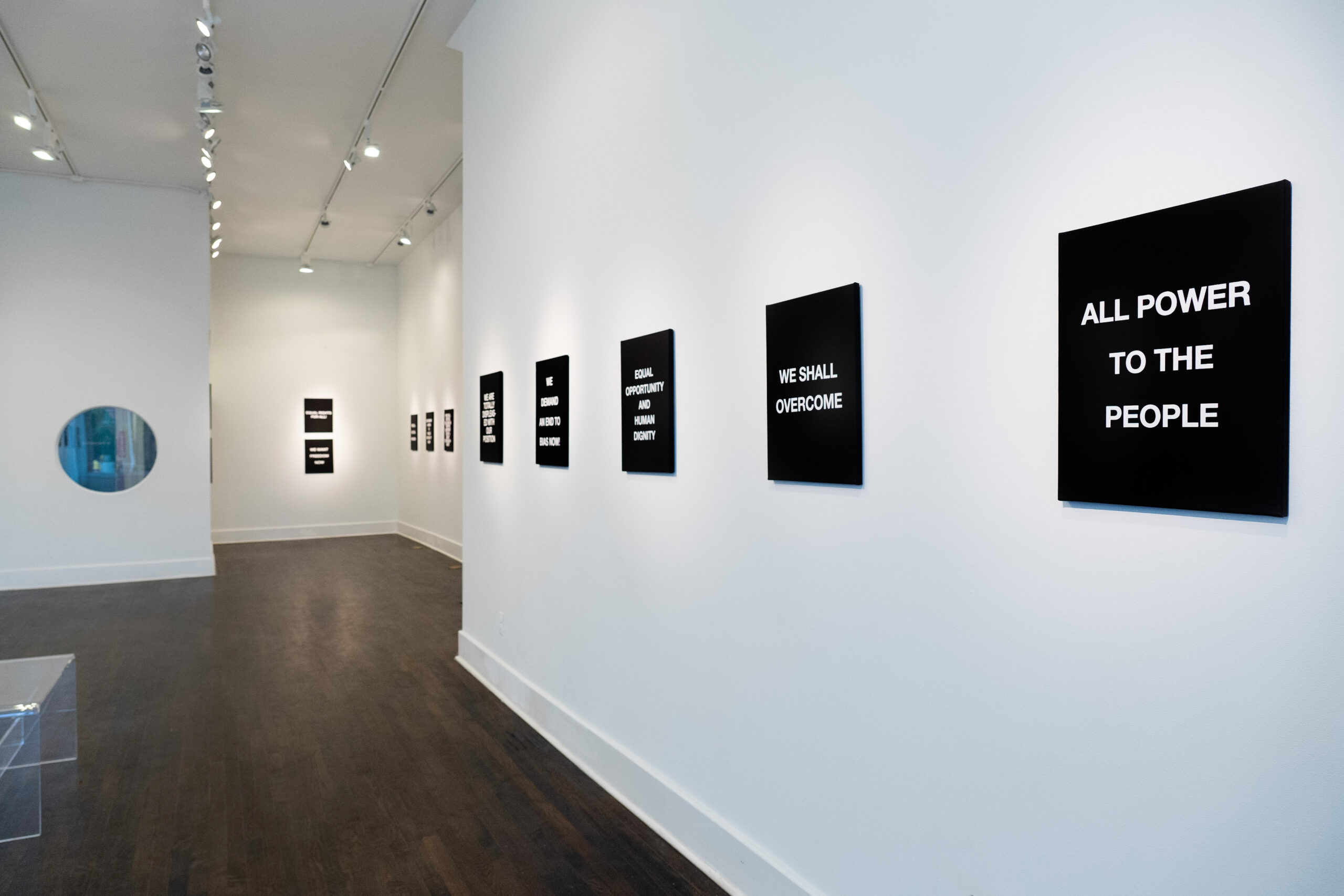 Merriam Webster dictionary defines “people” as “human beings making up a group or assembly linked by a common interest” and “the mass of a community as distinguished from a special class.” While a linguistic message such as “All Power to the people” does not diminish in emotional force or urgency of appeal over time, “the people” as the entity that is addressed is a fluid category up for change. In addition, by using instructional verbs that issue a command (“support,” “honor,” or “free all”) and by employing the personal pronoun “we,” Civil Rights era messaging was both direct and inclusive.

Makinde’s citations are exact quotations without alterations to the language. However, the 1960s aesthetic of placards tended to be in black on white, often collapsing two messages onto a single hand-made sign. We might read the artist’s choice of white on black, instead of black on white, as an allegory on his own experience of being Nigerian in a mostly white suburban Chicago neighborhood where discourse, education, and history were written by white people. He refers to his practice as “a journey into Black consciousness” which is the result of a missed encounter: “My upbringing is precisely why I approach art the way I do. I was raised in the Chicagoland suburbs and in my younger years attended predominantly white schools. This is something that shapes my work today, due to the fact that it was such a stark difference from the life I led at home with my immigrant parents from Nigeria. By going to schools with this sort of racial makeup, I didn’t learn a great deal of Black history, if at all.”

One of the canvases in the exhibition, “HONOR KING: END RACISM!,” is accompanied by a T-Shirt and yard sign limited-edition with the same slogan. 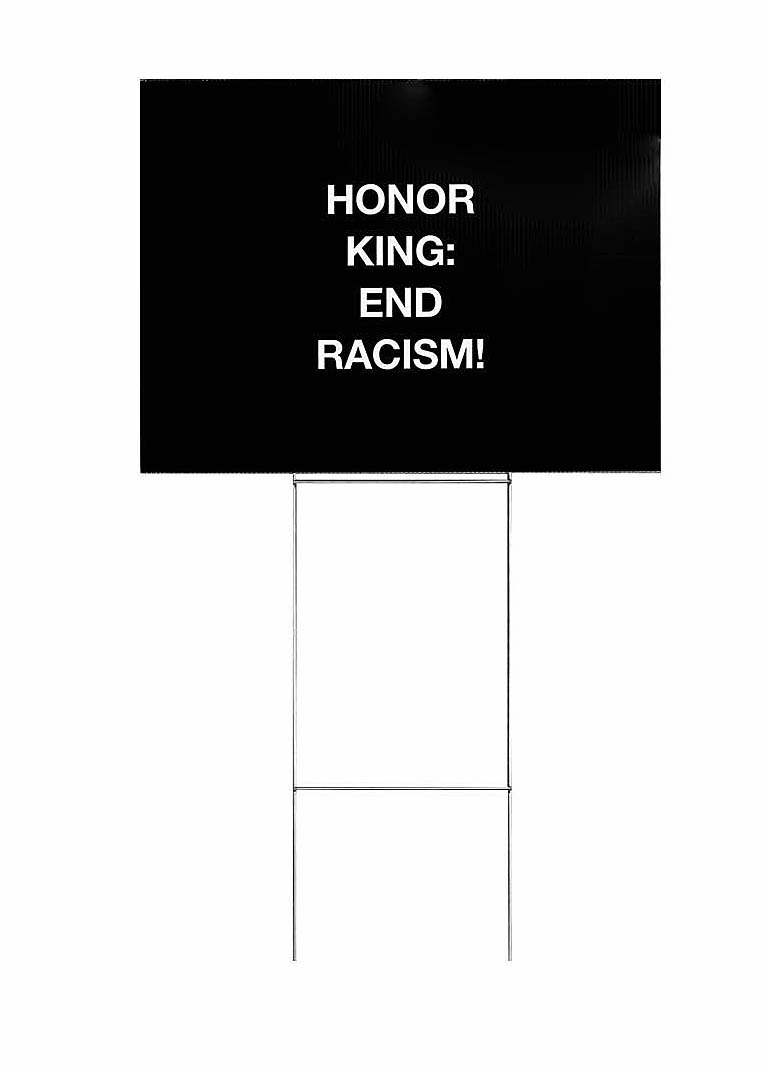 We can wear the shirt in our daily lives and plant the sign in our front yard. This allows us to participate directly in the performance of dissent, and it cleverly appropriates techniques from political campaigning for the purpose of protest art.

The exhibition has additional reach beyond the gallery space in a poster campaign. The slogan “Free all political prisoners,” alongside the announcement for the exhibition, is pasted onto twenty abandoned street facades in Detroit. 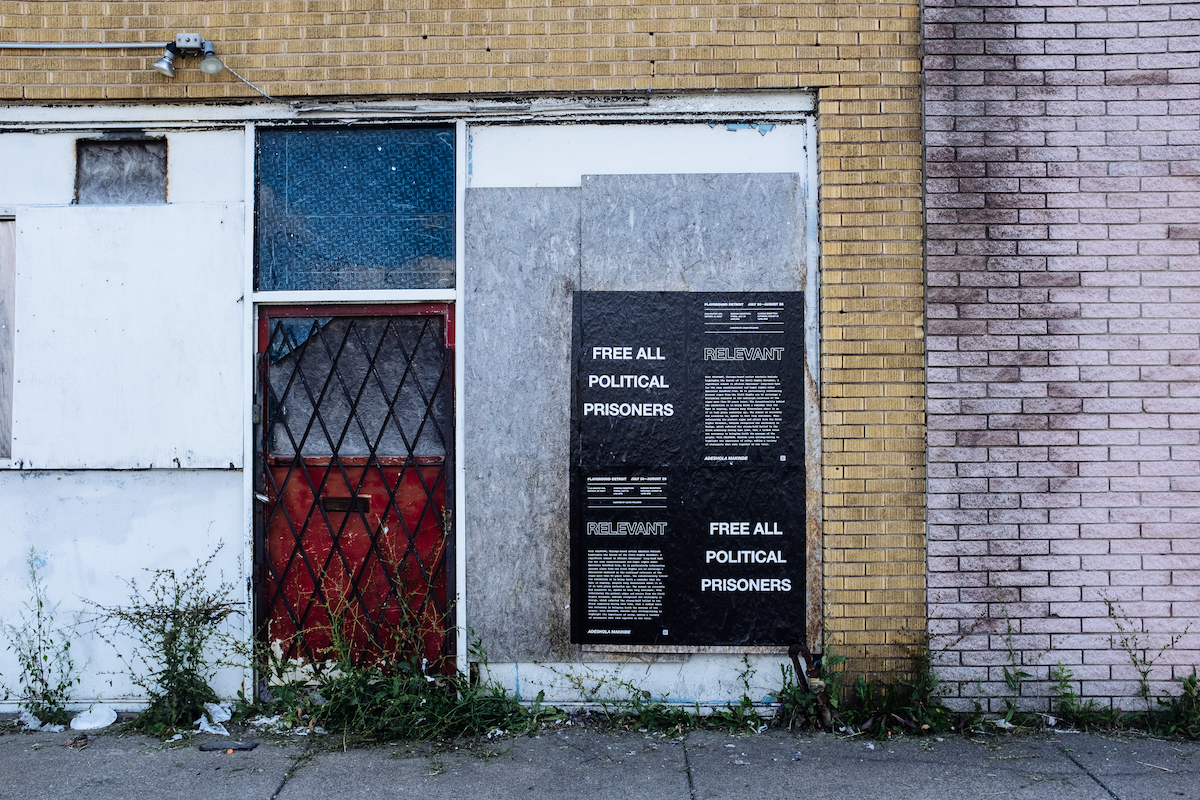 Most of the locations are placed along the historic Grand River Avenue which radiates out from downtown into the suburbs. As one of the city’s main traffic arteries, it is a busy thoroughfare that connects the inner city to outer residential areas, reaching as far as Lake Michigan. Abandoned spaces and derelict facades along the Grand River corridor stand in stark contrast to the urban revivalism of Detroit midtown or downtown where abandoned storefronts with decaying commercial lettering are mostly an image of the past. The RELEVANT posters blend the political with the commercial, the artistic with the political, and the contemporary with the historical.

RELEVANT pays homage to how Detroit was a city where black people embraced black power activism much earlier than in most other cities, and it isolates those slogans that have the most timeless ramifications for a cultural movement that has its historical roots in African American activism but is by no means limited to it. Famously in Detroit slogans such as “We demand equal rights now,” “Vote for freedom,” and “We demand an end to bias,” were visible during the Walk to Freedom in Detroit on June 23, 1963, after which Martin Luther King Jr. delivered an impassioned precursor speech to “I Have a Dream,” advocating against civil rights inequalities, police brutality, housing segregation, unfair wages, and gender imbalances. Makinde’s sorting out of popular slogans with dated historical references (such as “Stop Jim Crow” or “Join the N.A.A.C.”) makes a strong argument for the continued relevance of a fight for social justice today.

Lastly, looking into the history of individual slogans, the Civil Rights era emerges as a movement with a plurality of voices. “All Power to the people” is a popular anti-establishment slogan employed since the 1960s in a variety of contexts by pro-democracy movements, youth anti-war protests, or other social movements. Initially used by young people to protest oppression by older people, the so-called establishment, it was appropriated by the Black Panthers to protest the rich ruling class domination of society by white people. The famous slogan “Black Power” is directly attributed to the Panthers whose radical ideology of self-determinism is not synonymous with King’s more inclusive dictum of “All the power to the people.” 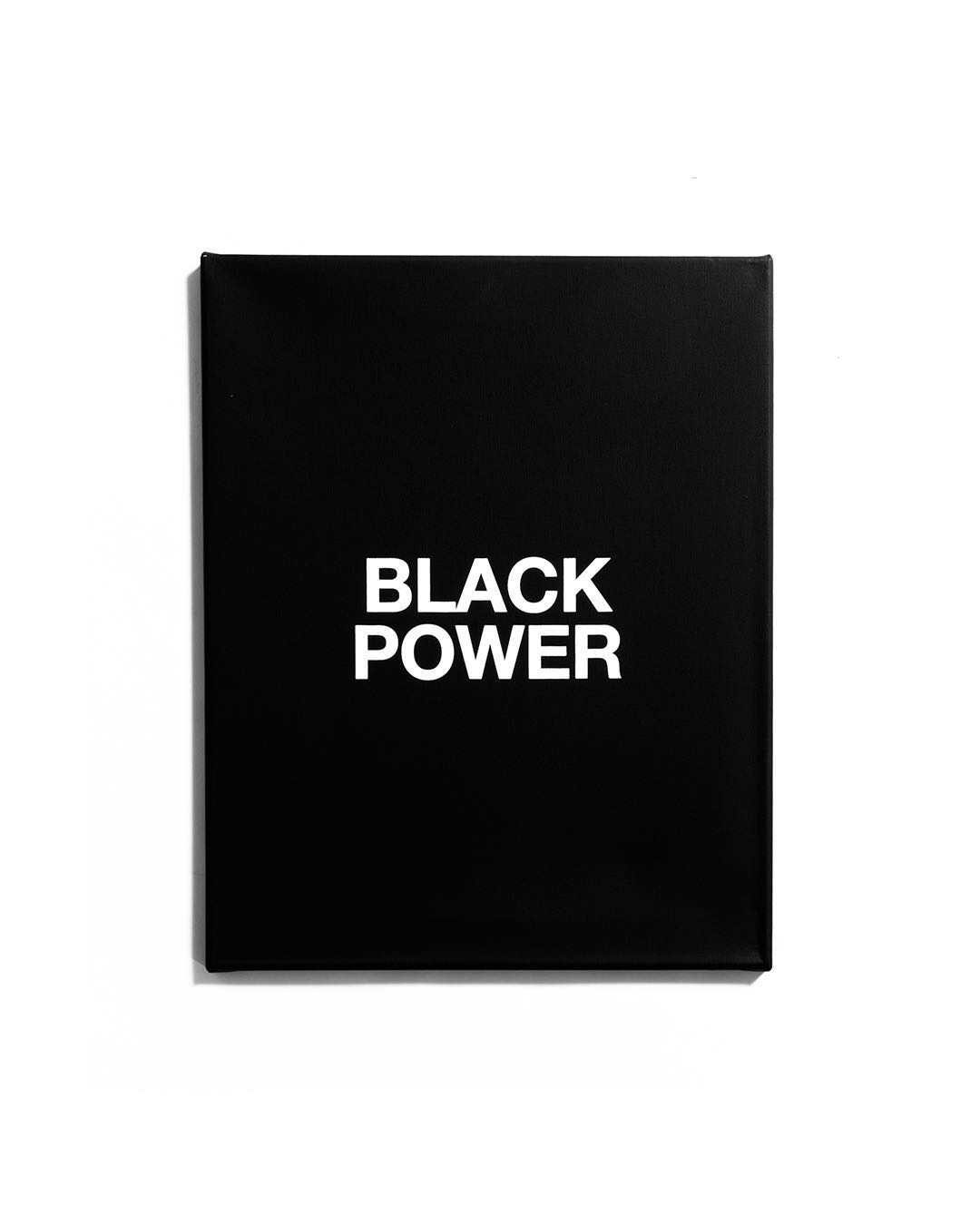 Over the past year, the language of protest has been in high demand and Makinde’s prescient show offers much food for thought. Who are the people, then and today? Who is fighting the good fight today? Are you part of the people? RELEVANT also offers up valuable insights into the history and the aesthetic of protest. Commentators have likened the recent political strife to that of the 1960s and expressed disbelief that the country has arrived at such a divided and volatile state. It is time for disbelief to make way for analysis. RELEVANT reminds us of the complexities of the historical moment generally referred to as the Civil Rights era and it shows the need to better understand the performative dynamics of protest and the rules of the language of dissent that fuel it.