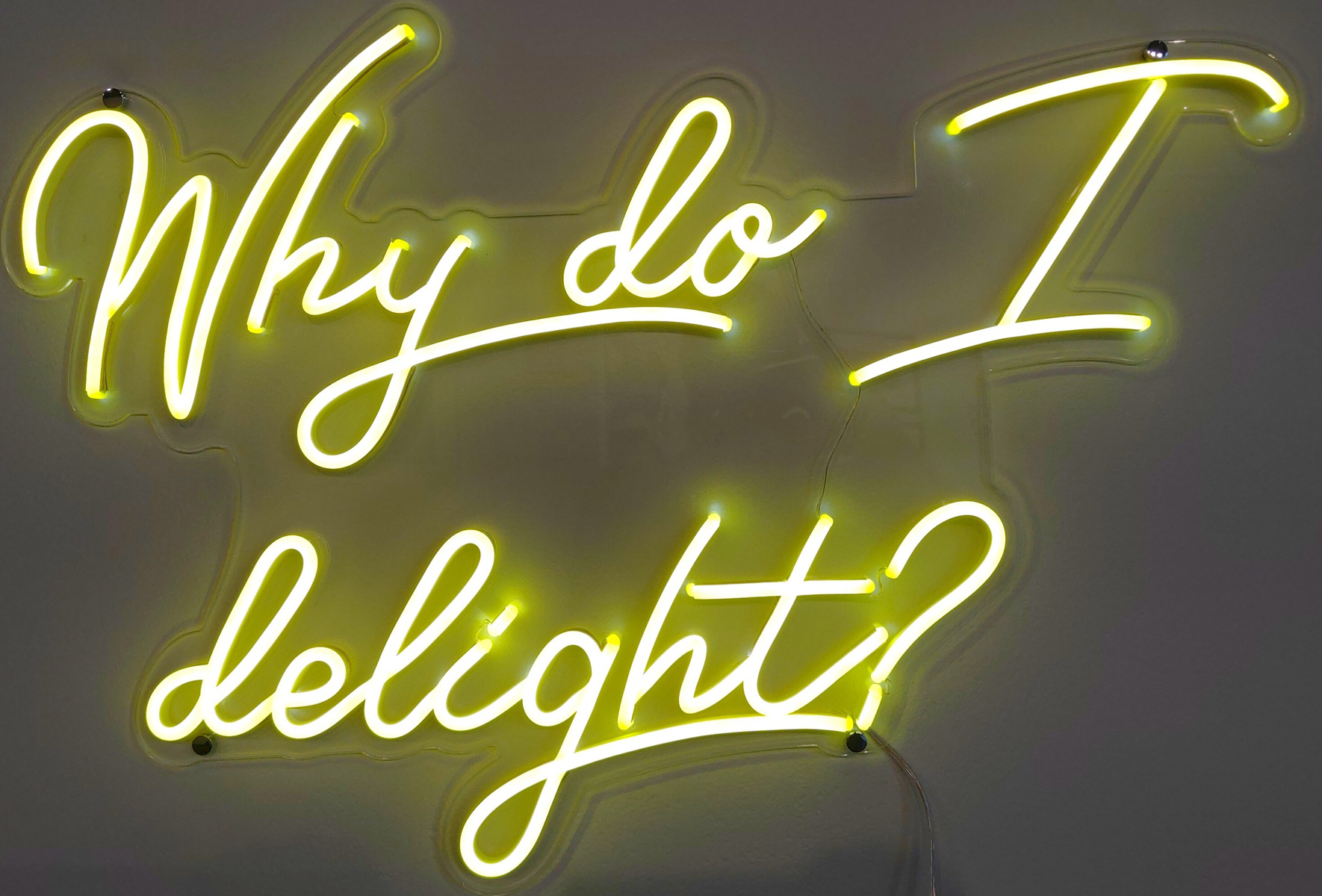 Why Do I Delight, by Shirley Woodson, 2021, neon signage, photo courtesy of Detroit Artist Market

Shirley Woodson: Why Do I Delight, a solo show and retrospective exhibit honoring the work and life of 2021 Kresge Eminent Artist Shirley Woodson, opened on September 24 and will be on display at Detroit Artists Market until October 23. The thirteenth Detroit recipient of this honor by the Kresge Foundation, Woodson is an accomplished artist, a veteran educator, an avid collector; she has also been a mentor to countless young Detroit artists throughout her 60-year career. In addition to this exhibit and as part of a celebration of her many contributions to the cultural life of the city, she is the subject of a recently released monograph produced by the Kresge Foundation, entitled “A Palette for the People.”  She is also the recipient of a no-strings-attached $50,000 prize. 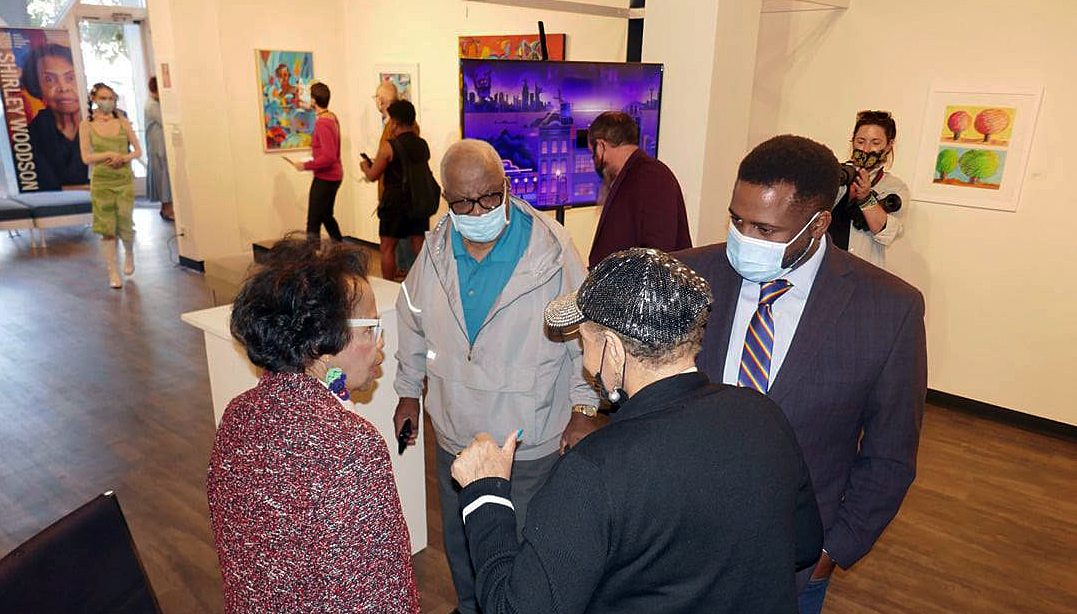 Woodson is a lifelong Detroiter.  Her family moved to the city in 1938 from Pulaski, Tennessee, searching for opportunities denied them in the Jim Crow South.   They prospered here and set down deep roots. Woodson says, “In those days, everyone wanted the same thing, I think, opportunity, opportunity.  We found it in Detroit and never looked back.”

In childhood, Woodson found her twin loves, art and education, and has devoted her life both to making art and to sharing it with young artists as an arts educator. Woodson graduated with an M.F.A. in painting from Wayne State University in 1958, followed in 1965 with an M.A. in education, which enabled her to pursue a career teaching art in the Detroit Public Schools, Highland Park Community College, and Eastern Michigan University. She later returned to the Detroit Public Schools as an administrator to supervise the art education program.  Peter Crow, who worked as an art teacher under Woodson’s leadership, describes her influence:

“If you want to say something about Shirley’s impact on art teaching in Detroit schools it would be that it was Shirley who set the high standard for art teaching in the city. She insisted on hiring qualified teachers and, if possible, teachers who were also artists. This was, I think, her philosophy. But it wasn’t necessarily new. She felt that she was carrying on a tradition of high standards in Detroit for the teaching of art, one that she knew as a student and when she was teaching.”

Speaking from the perspective of a former student, multi-disciplinary artist Elizabeth Youngblood remembers her first impression of Shirley Woodson in the classroom, “I remember her looking too close to our age, too young to be the teacher.  I also remember how much fun she brought.  Shirley believed in me making art before I did.”  Youngblood describes Woodson’s influence on many young Black artists as pivotal: “If she didn’t make a piece of art at all and only worked as an arts administrator who’s done everything for so long to make sure other people could make art, and kids could have some real-life idea that there are such people, artists, out there, that would be enough to celebrate Shirley Woodson.“

But of course, Shirley Woodson could and did–and does–make art. Even as she taught and mentored young artists, co-founded and led organizations like the National Conference of Artists, organized shows, ran galleries, and collected art, Woodson has maintained an active and productive studio practice. The current retrospective at Detroit Artists Market serves up a range of work the artist has created throughout her career, as well as some new artworks in a surprising variety of media. 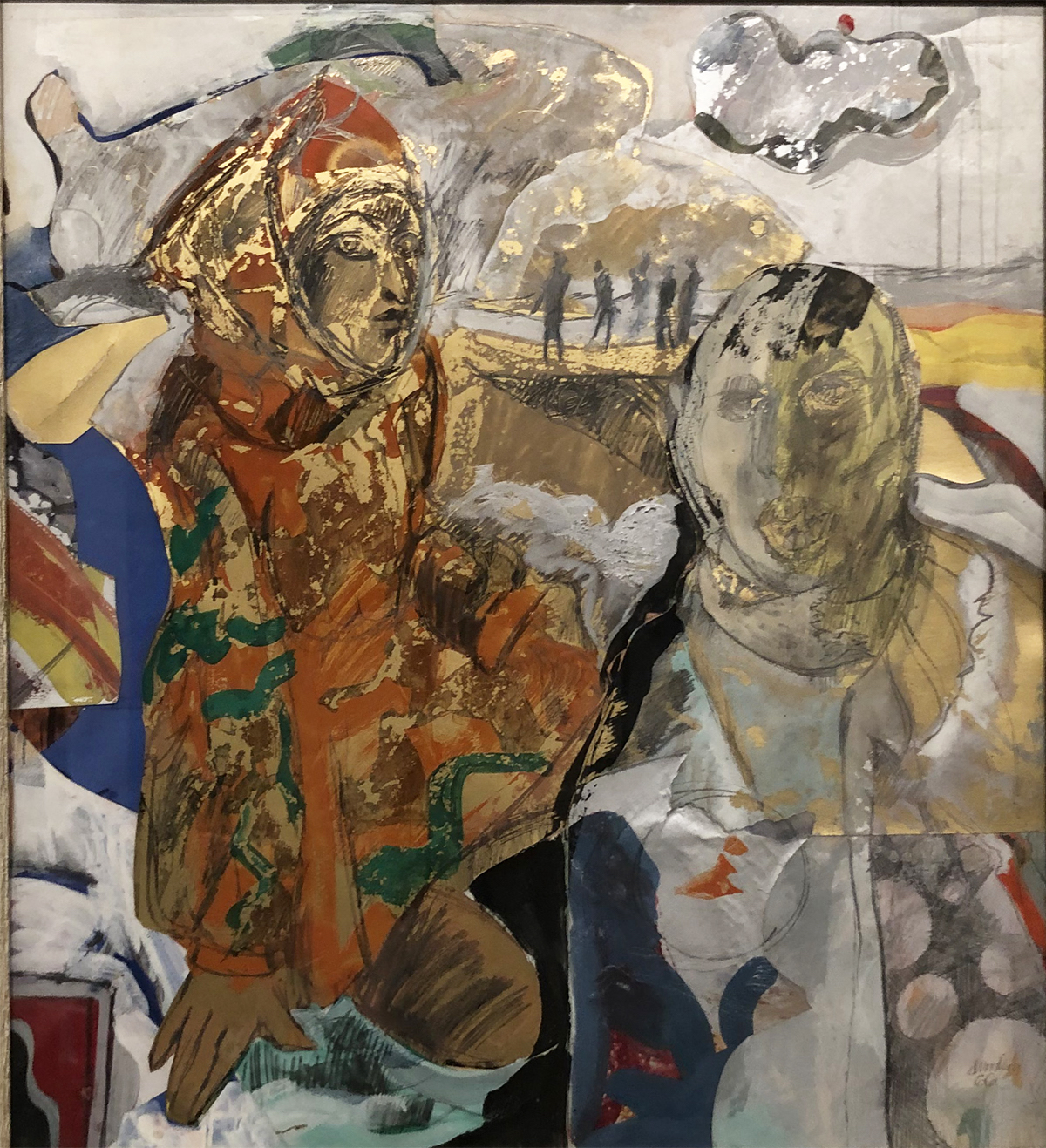 An early work, Beach Scene, sets the table for themes and subjects Woodson has returned to over the course of her career.  Painted in 1966, the painting features shrouded female figures that face the viewer in the foreground, setting up a distant spatial relationship with the silhouetted presences on the faraway beach with a roiling sky overhead.  Compared to her later work, the palette is fairly monochrome, though specks of gold leaf give a welcome sparkle to the hazy surface. Adjacent to this rather subdued and small-scale piece, Dreams #3, from 1995, functions as a declaration of the artist’s intent to follow her own inclinations as a colorist and as a painter of signs and symbols. 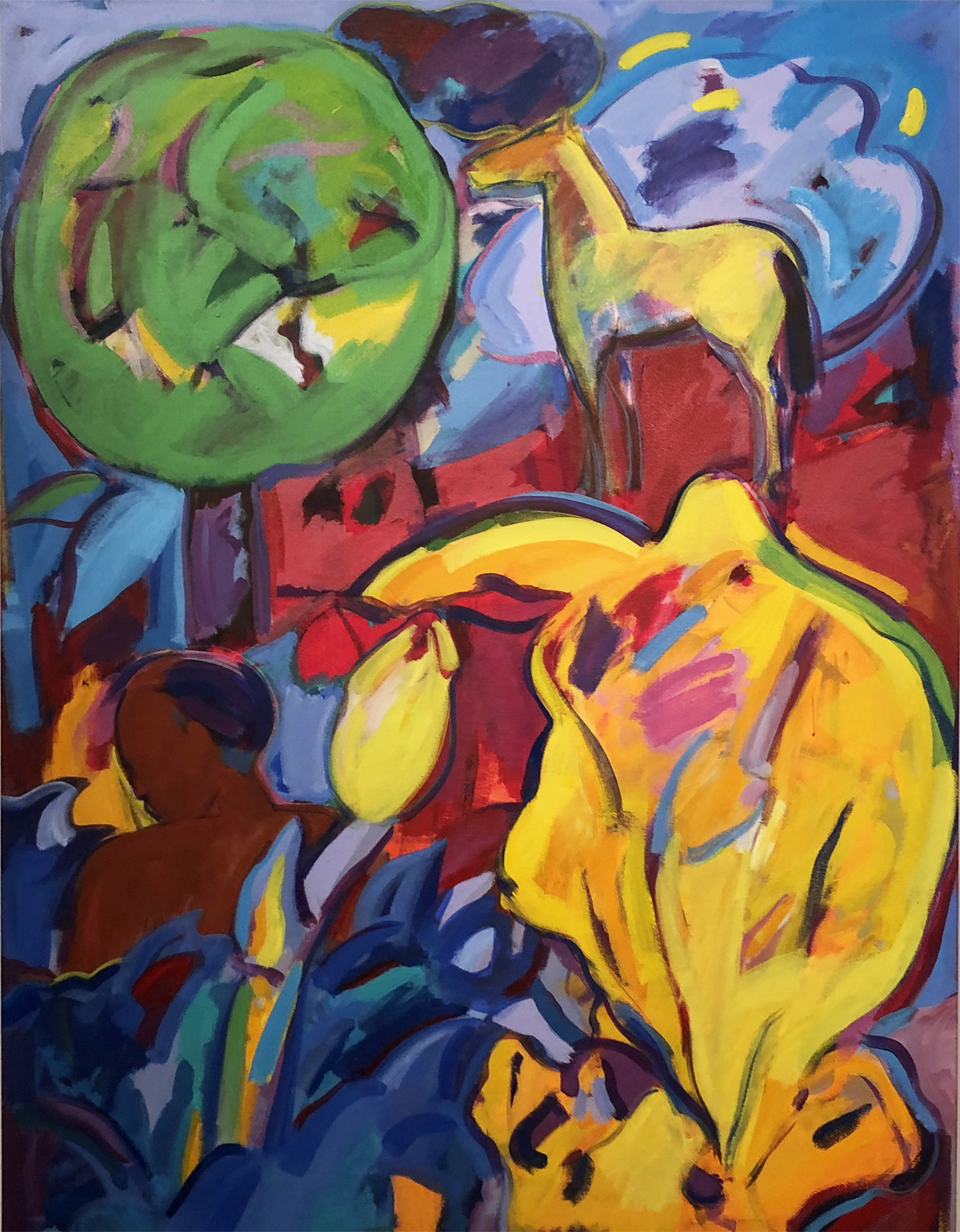 The curator of Why Do I Delight, Leslie Graves, has included a sizeable collection of oil pastels from the 1990’s in the exhibit, which seem to show the artist moving toward complete abstraction.  The perfunctorily rendered trees in these compositions barely nod at representation, focusing instead on flat circular planes and their relationship with each other. Woodson employs the premise of the tree forms to explore the interaction of the colors within the ovoid shapes. 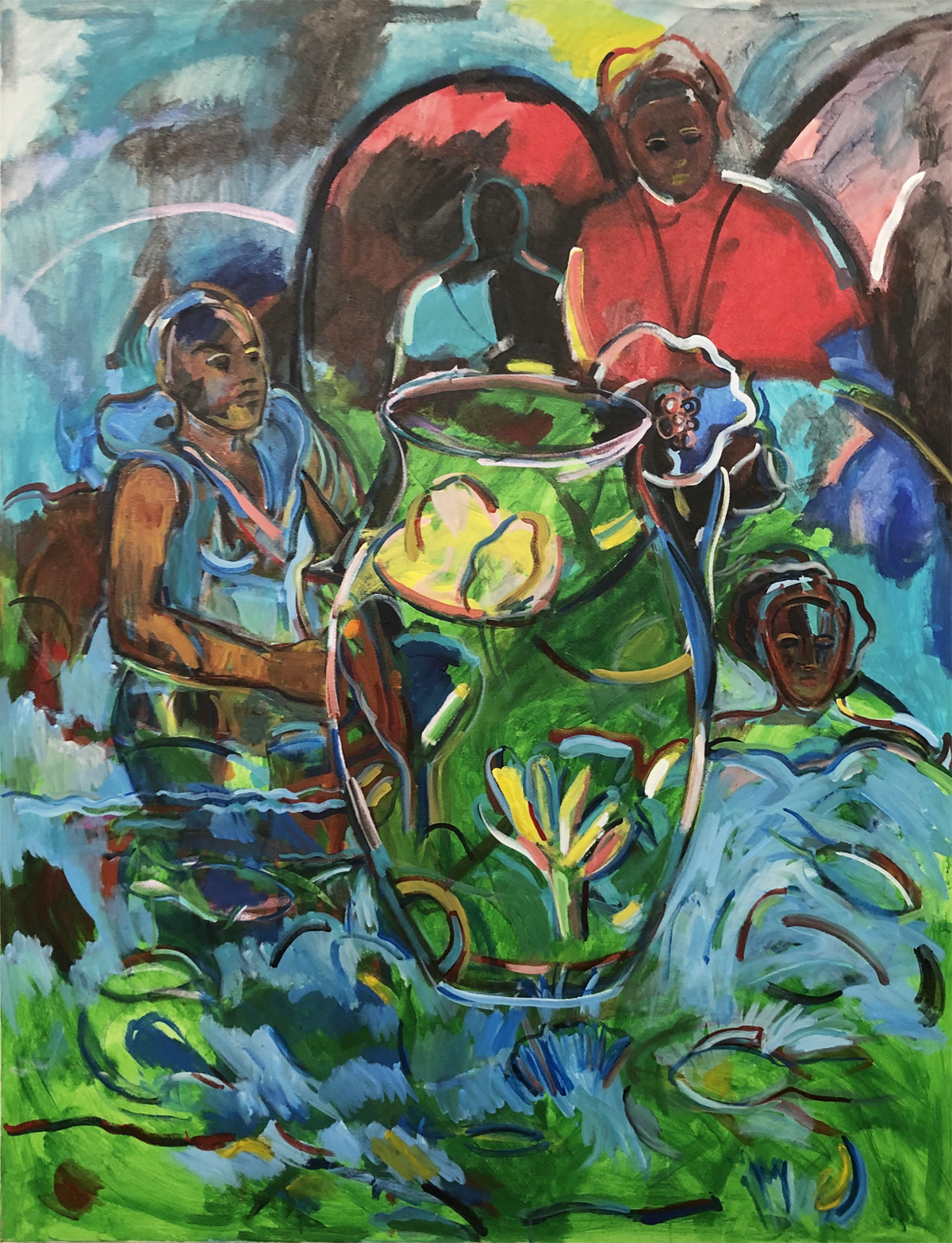 Three large paintings from 2021 show that Woodson is still actively exploring the parameters of her mature style, which is characterized by lush color, gestural brushwork and a flattened picture plane. Elements of the background and the foreground meet and mingle in a visual conversation. It’s only fair that Fauves like Henri Matisse and Raul Dufy come to mind when looking at these paintings, since they were among the first European avant-garde artists to make a study of African and Oceanic art.  Woodson returns the favor here, employing the visual syntax of European painters to suit her own–African American–purposes. Green Vase Nocturne for Toni Morrison is typical of this most recent work, a lyrical composition that suggests a twilight fish pool, the outline of a vase super-imposed and refracting wavey images, all surrounded by shadowy figures.

In a somewhat startling departure from her previous work, Woodson displays some new text-based artworks in Why Do I Delight, and in particular, has included a couple of neon pieces that bear witness to her lively interest in contemporary trends and her ongoing appetite for exploration. The wistful line “Why do I delight?” appears in glowing yellow,  taken from a poem that the artist wrote for her late husband Edsel Reid, while nearby, the words Being Pedestr-ian, in basic white, adorn the gallery wall and resonate with her wry humor, precisely describing what she is not.

Receiving the Kresge Eminent Artist award certainly marks a well-deserved honor in Shirley Woodson’s life, but based upon the work in her current solo show at Detroit Artists Market it is abundantly clear that her creative career is far from over. As she herself eloquently puts it: “The artist is always confronted with the next step.  You learn to see every step of the process as a question: What can I share with people? What do I still have to say?”

She adds, “I’m listening and waiting.” 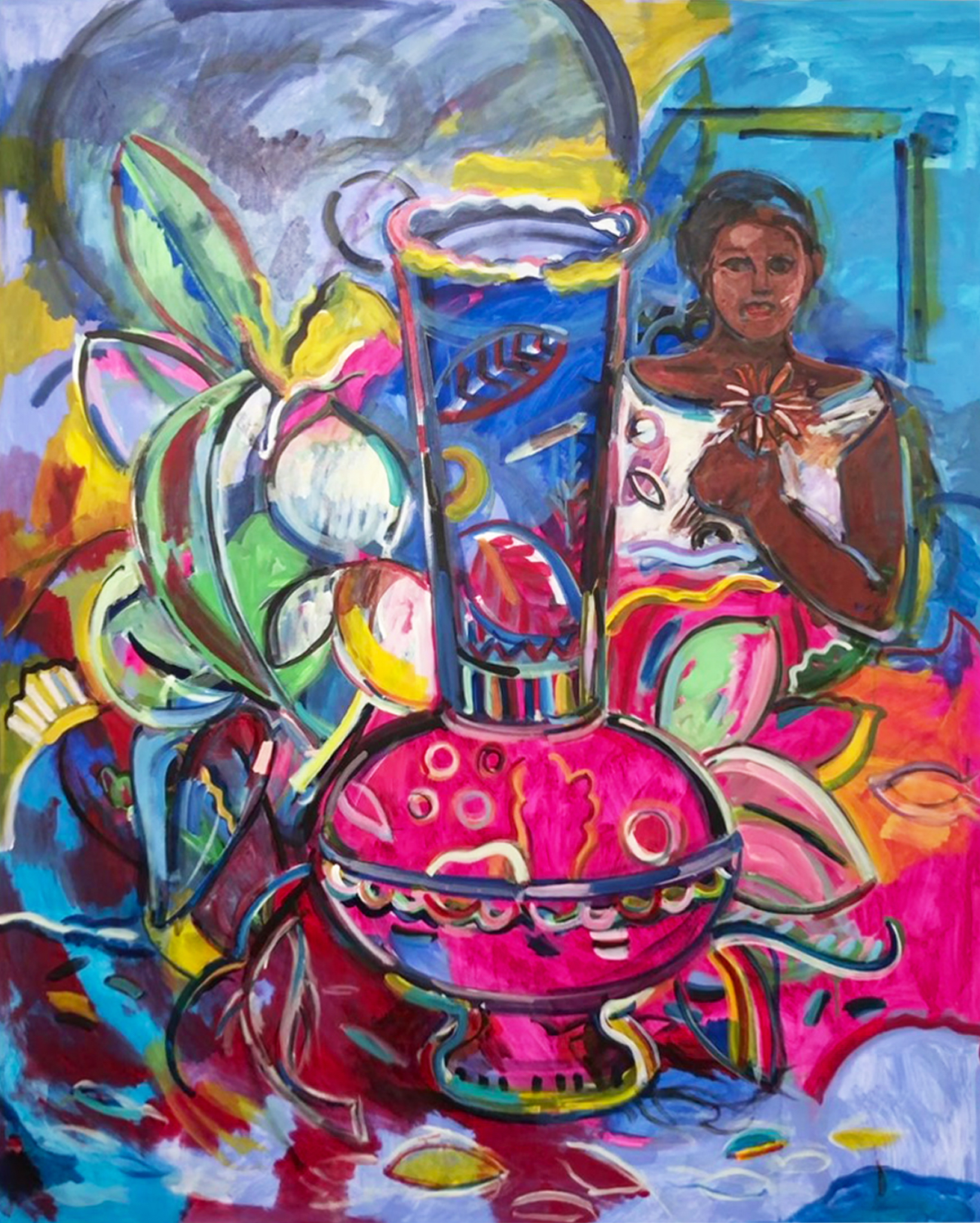 Shirley Woodson Celebrates Her Retrospective Exhibition at the Detroit Artist Market through October 23, 2021