By Her Hand: Artemisia Gentileschi @ DIA

By Her Hand: Artemisia Gentileschi and Women Artists in Italy, 1500-1800 at the Detroit Institute of the Arts 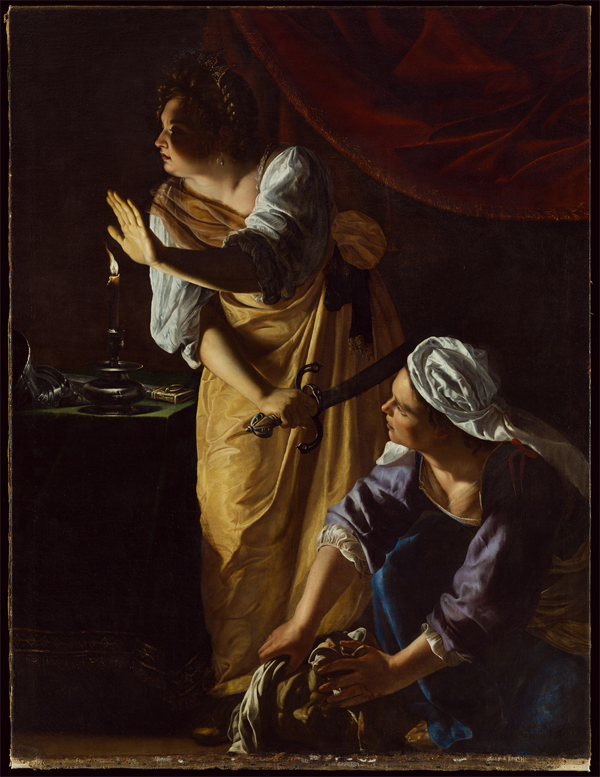 Judith and Her Maidservant with the Head of Holofernes by Artemisia Gentileschi, 1523-1525, oil on canvas, photo DIA

If you are suffering from the cold gray February doldrums and you’re looking for a short vacation from wintry isolation, the Detroit Institute of Art has a solution for you. “By Her Hand: Artemisia Gentileschi and Women Artists in Italy, 1500-1800” offers a tightly focused survey of masterpieces by women artists, some famous and others less so, in a warm and inviting setting. The exhibition spotlights compelling stories and transcendent artworks of the anomalous female Italian art stars who managed to make remarkable art—and conduct successful careers–in an age when few women had access to the knowledge and tools to make art at all.

In a series of adjoining galleries, visitors are expertly guided by the organizers from the Detroit Institute of Art and the Wadsworth Athenaeum Museum of Art on a three century-long tour of women artists who were significant and highly successful in their time. Some of the most famous surviving examples of their work are on view, as well as some fascinating additions.   The exhibition tells each artist’s surprisingly varied life story:  how each managed to conduct a successful arts career in a cultural environment that did not welcome women. 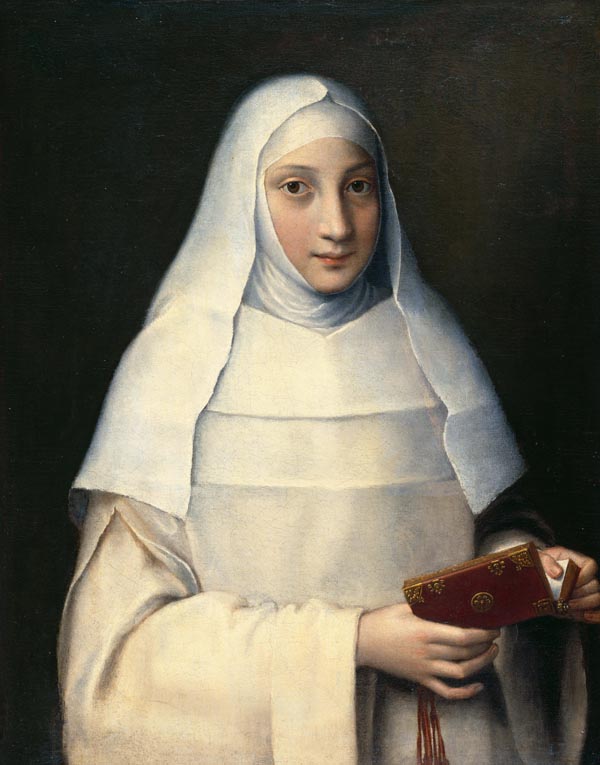 The Artist’s Sister in the Garb of a Nun by Sofonisba Anguissola, 1551, Oil on canvas, photo DIA.

The exhibition starts off with a bang. Sofonisba Anguissola’s striking portrait of her sister Elena dressed as a nun hangs in solitary splendor on its own wall at the exhibition’s entrance.  Painted when Anguissola was only 16, this emotionally resonant white on white likeness foreshadows her future prominence as an internationally known portrait painter.

Unlike most of the artists in “By Her Hand,” Anguissola was not the daughter of a professional artist.   Her noble Cremonese father, Amilcore Anguissola, was an enlightened proponent of education for women. He arranged for all six of his daughters, of which Sofonisba was the eldest, to receive instruction in Latin, music and painting. Already a local art celebrity at a young age, she was known for painting a large number of self-portraits which served as calling cards advertising her skills. She was sufficiently celebrated in her twenties to be invited to join the Spanish court of Philip II in Madrid, where she later painted the portrait of Infante Don Fernando in 1573 which is now on view in the gallery. Unfortunately, not many of her paintings survive; most of the artworks from her Spanish residency were lost in a 17th century fire.

Each of the four artists who share the gallery adjoining the entrance found her own path to success in the cultural environment of her day. As was usual at the time, Fede Galizia, Orsola Maddelena Caccia, Lavinia Fontana and Diana Scultori all gained access to the art world through connection with their artist fathers, but from there their stories widely diverge. 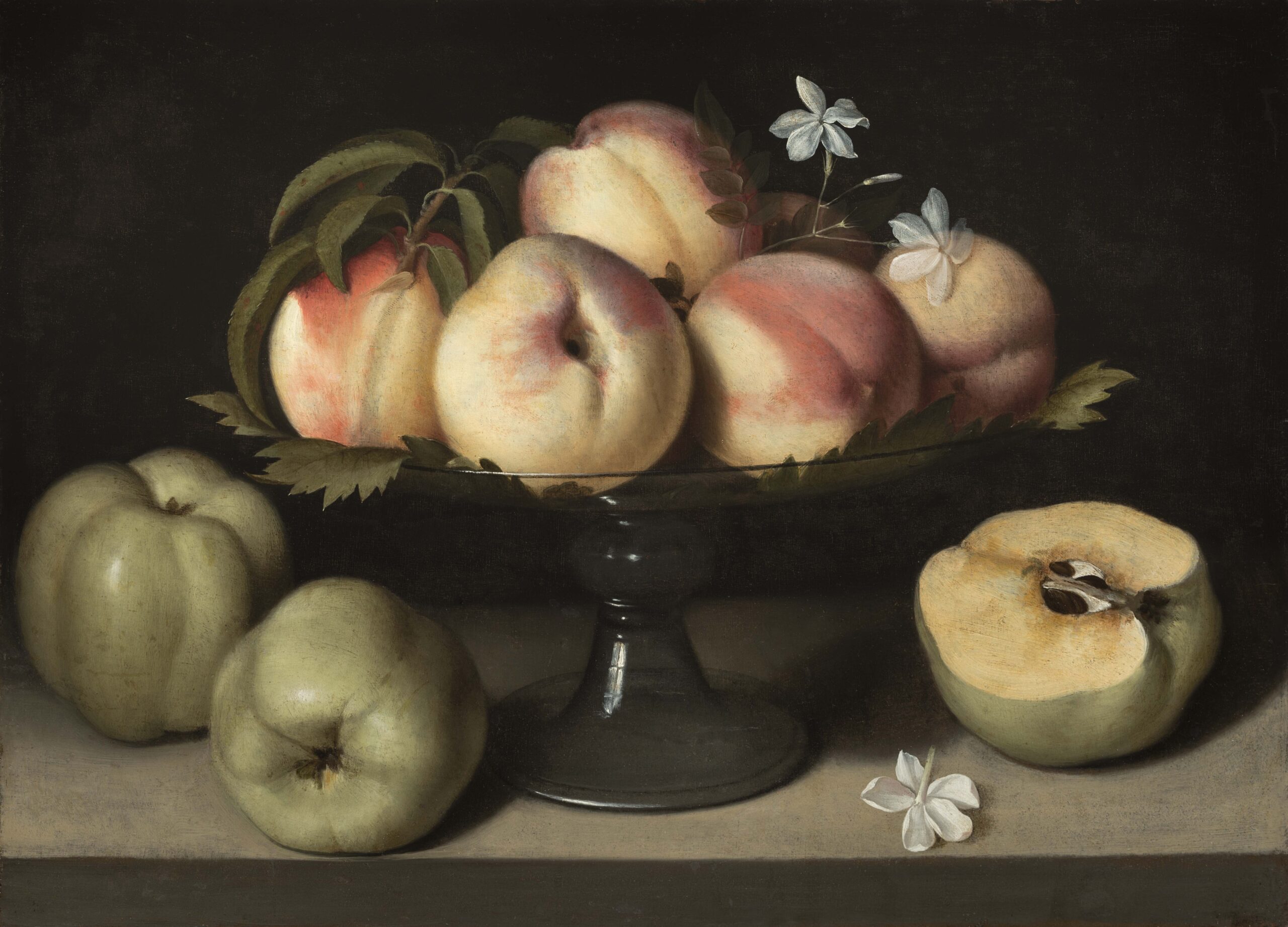 Fede Galizia (1578- c.1630), the daughter of a well-known painter of miniatures, chose to concentrate on portraits and religious scenes, but was particularly admired as a pioneer in the new genre of still life.  The very beautiful, modestly sized Glass Tazza with Peaches, Jasmine Flowers and Apples featured in this exhibit is typical of her work. In it, a centrally positioned bowl of vibrantly colored fruit almost invites the viewer to reach out for a delicious taste. 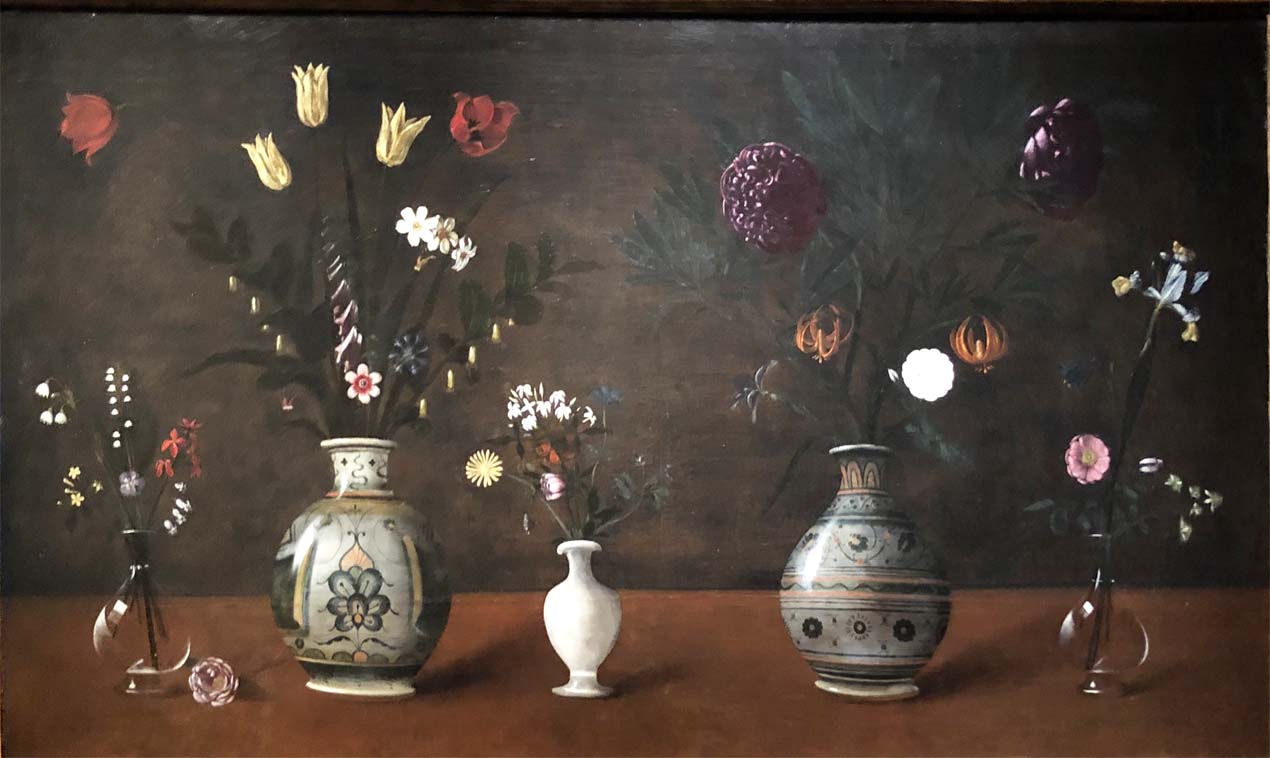 Vases of Flowers on a Table by Orsola Maddelena Caccia, 1615-25, oil on canvas, photo K.A. Letts

Perhaps the most interesting life story of the four is that of Orsola Maddalena Caccia (1596–1676).  Her father Guglielmo Caccia, a Mannerist painter, founded the Ursuline Convent at Moncalvo to shelter his six daughters from the political turbulence of the region. Caccia later became abbess there and encouraged the nuns to make art as a means to support the convent. She herself painted religious scenes as well as spiritually symbolic still life compositions. (Coincidentally three of Caccia’s paintings, which are vanishingly rare outside the region of their production, were recently donated to the Metropolitan Museum of Art in New York, where they now are on display in the newly reinstalled European painting galleries.) 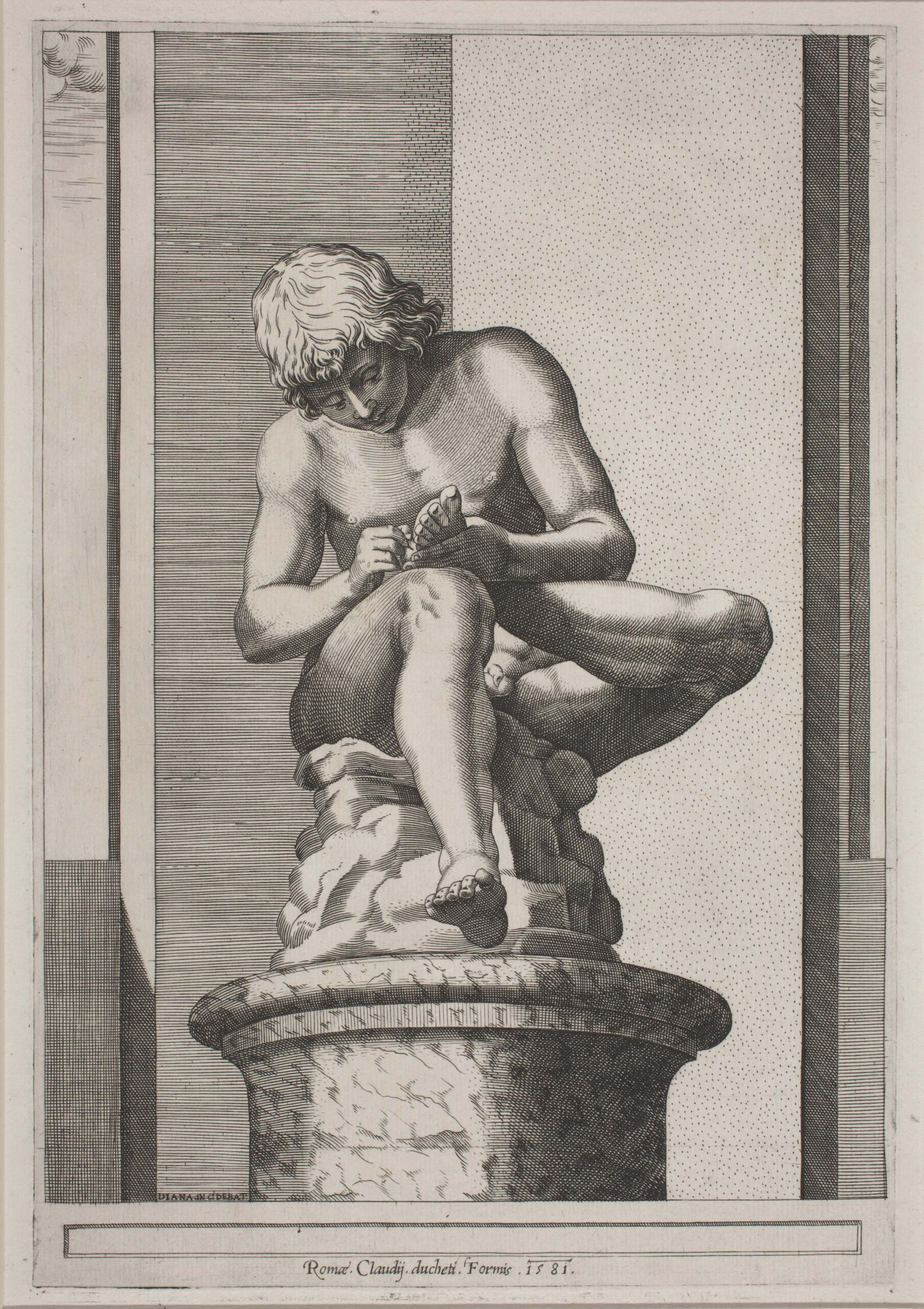 The engraver Diana Scultori (1547–1612), learned her craft from her father and used her expertise to promote the fortunes of her architect husband, Francesco da Volterra, during their long and productive professional lives in Rome. Lacking a strong foundation in drawing, and like many other engravers, Scultori often used other artists’ work as the basis for her prints. Most of the drawings for her engravings came from her husband, her father, or an artist with whom she was acquainted. She was well known during her life as a savvy businesswoman who promoted the interests of her family through the acquisition of the Papal Privilege, a kind of license that allowed her to make and market her own work.

Of the four painters in this gallery, Lavinia Fontana, (1552-1614) was probably the most famous during her lifetime. She had the good luck to be born in Bologna, where attitudes toward women in the professions, including art, were unusually enlightened. She was trained by her father Prospero Fontana and had a highly successful career as a portraitist, as well as a painter of mythological and religious subjects. Her meticulously observed and psychologically penetrating Portrait of Ginevra Aldrovandi Hercolani shows why the artist was greatly admired by her contemporaries. 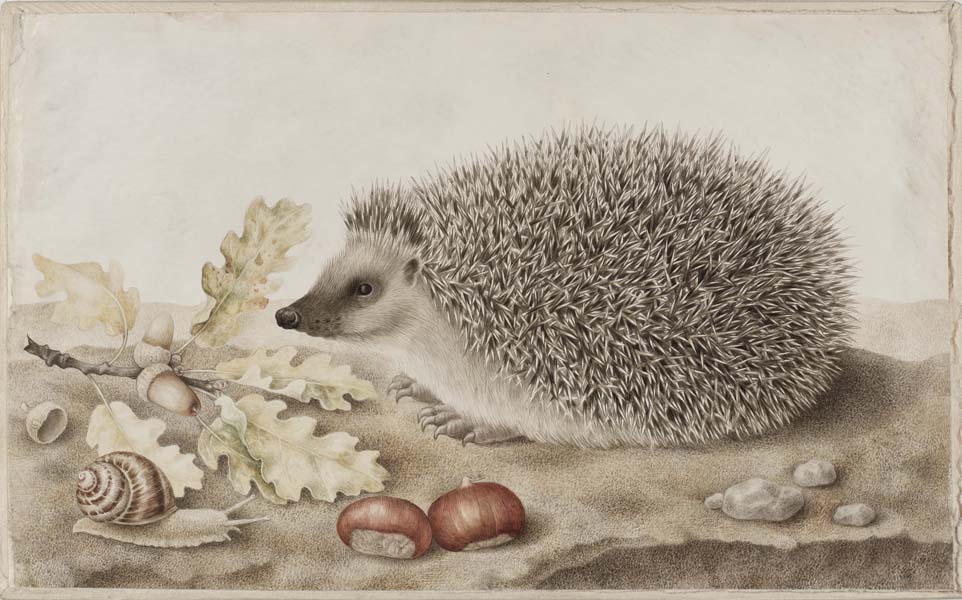 A Hedgehog in a Landscape by Giovanna Garzoni, 1643-1651, bodycolor on vellum, photo DIA

The sensitively rendered still life paintings of Giovanna Garzoni (1600-1670), are a highlight of this exhibition; they reward the viewer’s attention with a palpable sense of connection to the artist and her world. Garzoni, who never married, was essentially an itinerant painter who created work for wealthy patrons in Venice, Naples, Florence and Rome. The accuracy and intimacy of Garzoni’s gaze is particularly evident in her wonderfully realized Hedgehog in a Landscape. Each quill of the little creature is lovingly depicted; his soft undercoat is in delightful contrast to his pointy claws and twitchy nose and the chestnuts in the foreground look good enough to eat. 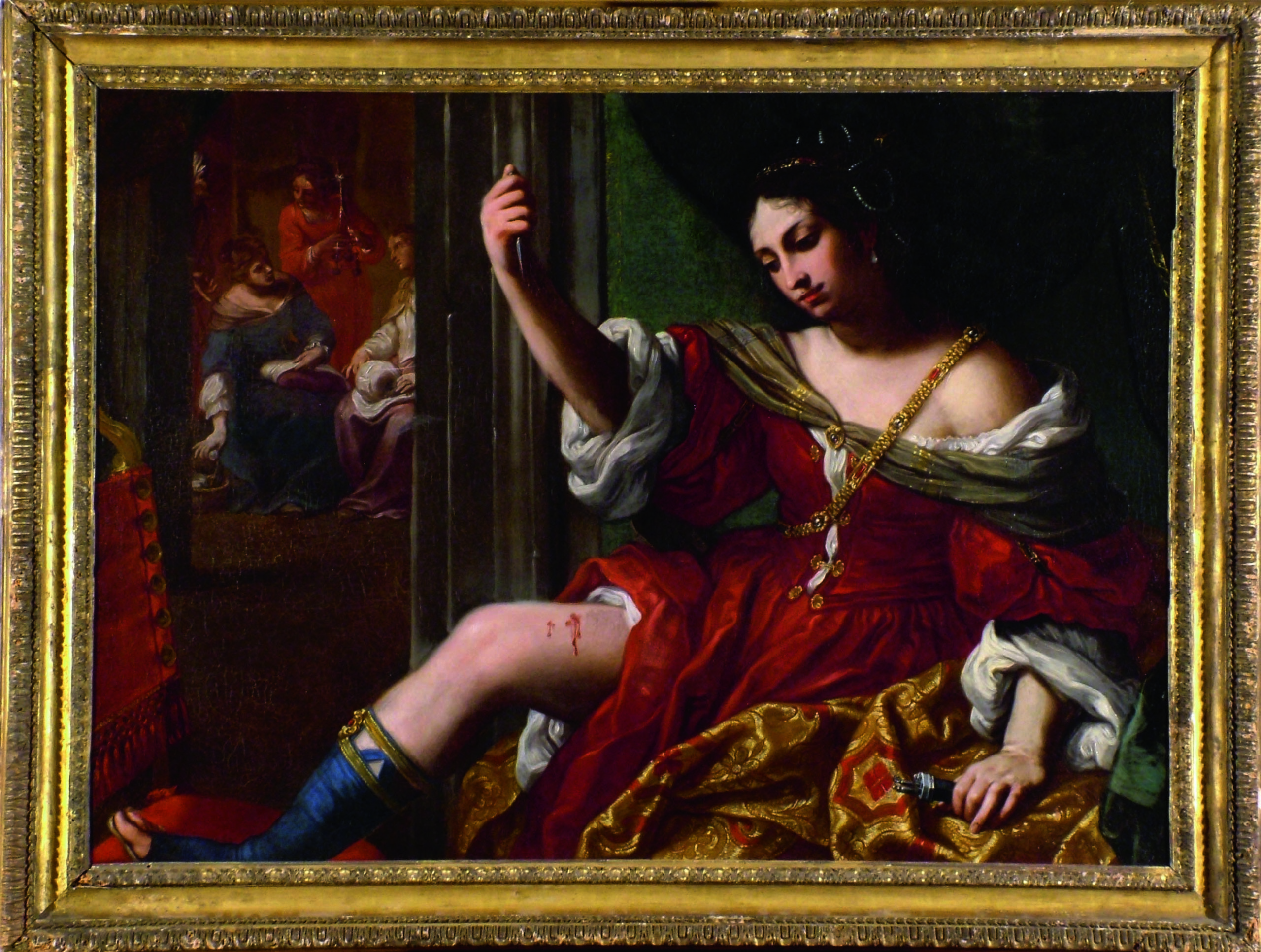 On the opposite wall of the gallery from Garzoni’s artworks, we find the prolific Bolognese painter Elisabetta Sirani (1638-1665). Throughout her short but intense career, Sirani painted a wide range of subjects, from portraits to allegories to religious themes.  Not only was she the source of a remarkably abundant body of work, Sirani founded a painting school for aspiring woman artists. Her painting in this exhibition, Portia Wounding Her Thigh, is remarkable for a number of reasons.  In addition to the rarity of the theme, the veiled eroticism of the subject’s exposed thigh and her dreamy facial expression make this composition startlingly complex on a psychological level. To a modern eye, Sirani’s choice of self-cutting as a mark of female agency may seem fraught, but there is no denying that this is a major painting by a woman artist from the Baroque period. 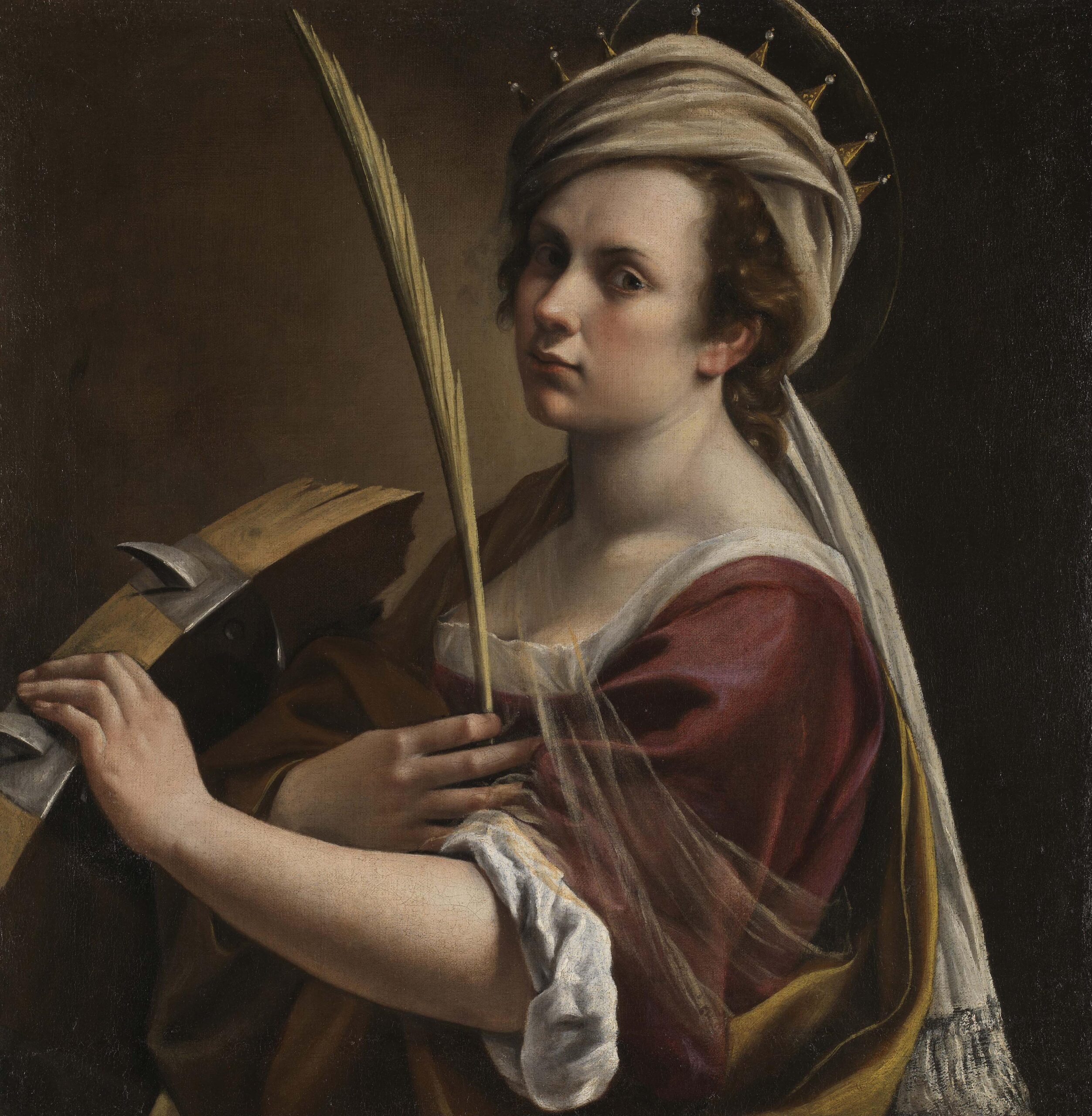 The central placement of Artemisia Gentileschi’s famous painting Judith and Her Maidservant with the Head of Holofernes, one of the gems in the DIA’s permanent collection, leaves no doubt that she is the star of this show. The subject of the virtuous Judith triumphing over the villainous Holofernes was a favorite of Renaissance and Baroque painters, but Gentileschi (1593-1652/53) tells the story here with remarkable energy and immediacy. The cinematic play of light and shadow across the face and arm of Judith and the powerful dynamism of the two women united in murderous sisterhood makes this painting unique.

In acknowledgment of Gentileschi’s well-deserved status as the quintessential female painter of the Baroque era, the museum has produced an informative and insightful video that puts her in art historical context and provides welcome detail for understanding of Gentileschi’s life and times. 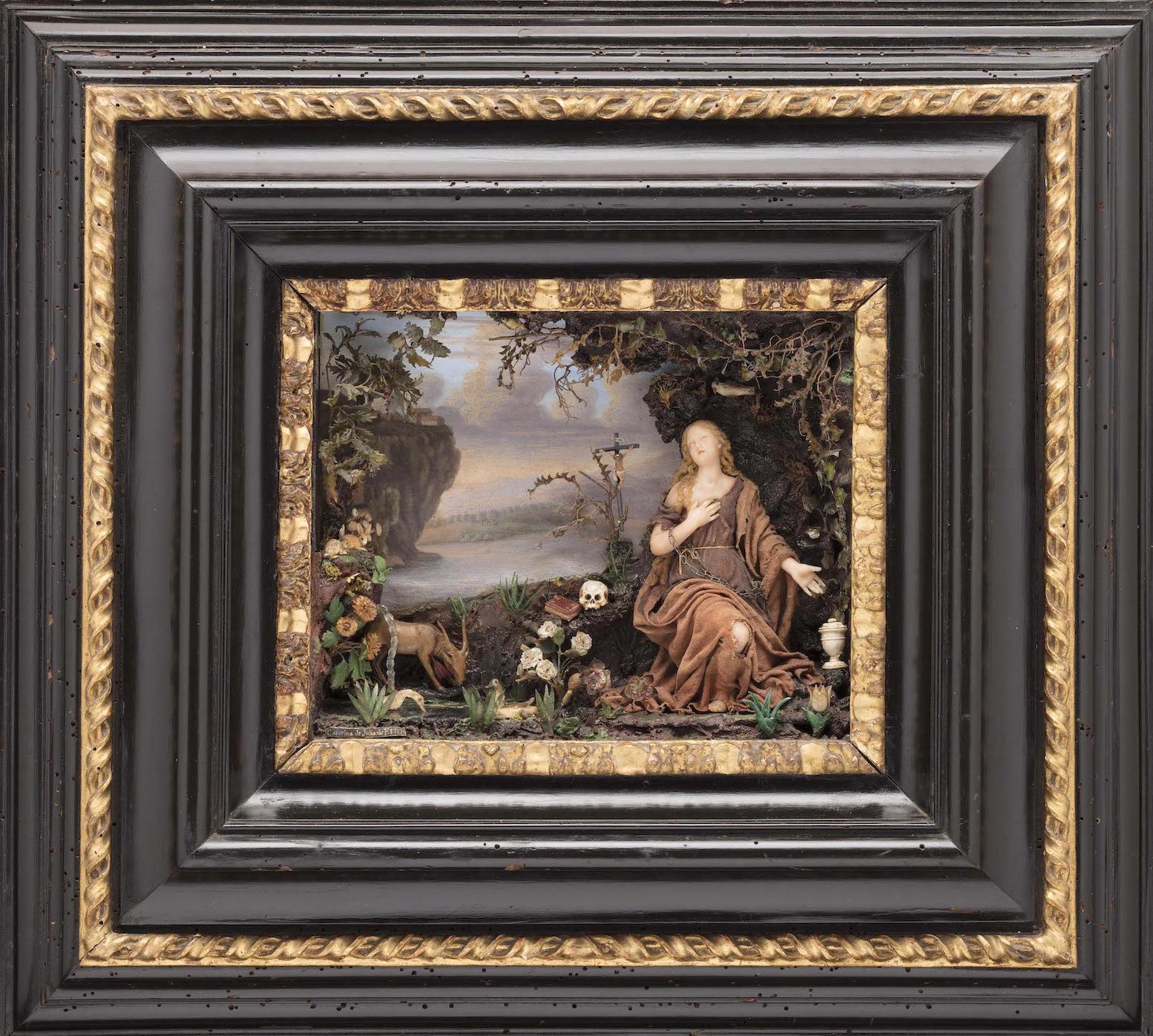 The final gallery in the exhibition, which features work by women artists from the eighteenth century, suffers from a puzzling sense of decline in the energy and scale in the work. Or possibly the bravura visual fireworks of the paintings by Elisabetta Sirani, Giovanna Garzoni and Artemisia Gentileschi in the previous gallery are simply a hard act to follow. Of some interest is the lone 3-dimensional piece in the show, Penitent Magdalene by Caterina de Julianis (1670-1743). The diorama, which is part of the DIA’s permanent collection, contains a small female wax figurine in a wooded environment, surrounded by animals and symbolic elements. The exhibition ends as it began, with a single painting, a  restrained self-portrait of the Florentine artist Anna Bacherini Piattoli (1720-1788), currently on loan from the Uffizi.

The virtuosic and often transcendent work that comprises “By Her Hand: Artemisia Gentileschi and Women Artists in Italy, 1500-1800” will be on view at the DIA until May 29, 2022. This expertly curated and enlightening exhibition tells the story of women artists who were eminent and highly successful in their time but were often rendered posthumously obscure through misattribution of their work to more famous male artists and other forms of art historical neglect. Shows like this are an important corrective to previous critical malpractice.

While the exhibition’s press release lists the Detroit Institute of Art and the Wadsworth Atheneum as the organizers of “By Her Hand,” it would be a shame not to acknowledge the contributions of the co-curators of this expertly researched and beautifully installed show by name: Eve Straussman-Pflanzer, former Head of European Art Department & Elizabeth and Allan Sheldon Curator of European Paintings at the DIA (and now Curator of Italian and Spanish Paintings at the National Gallery of Art, Washington D.C.)  and Doctor Oliver Tostmann, Susan Morse Hilles Curator of European Art at the Wadsworth Atheneum.