Marcia Freedman’s one-person exhibition, Memory & Observation opened April 10, 2015 at the Birmingham Bloomfield Art Center in the Robinson Gallery. It introduces the audience to twelve oil paintings with an underpinning of the figure in some paintings and objects in others. Ms. Freedman’s work, a style that could be aptly described as Abstract Expressionism,  is part of the art movement that developed in New York City during the mid-1940. These paintings are rooted in the 1950’s work by Willem de Kooning, Robert Motherwell, and Joan Mitchell, and Freedman continues in that genre much like a composer of classical music continues to compose after the work of Beethoven, a jazz musician inventing music in the style of Miles Davis, or a writer composing a sonnet after Shakespeare and Frost. 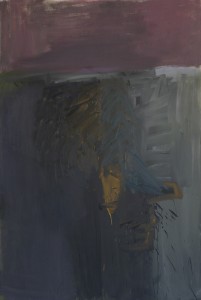 The painting Baby It’s Cold Outside  leaves behind any reference to the figure and divides up the vertical composition using color, form, and gesture. The muted color palette and probing brush gesture is intuitively sophisticated. An audience will immediately sense the spontaneity of execution and wonder how these expressions manifest themselves. The answer starts with the title of the exhibition, Memory & Observation. The critics Clement Greenburg and Harold Rosenberg wrote extensively about this post-war, Abstract Expressionism movement, where they describe the artist mannerisms after moving on and away from representational painting. They explain that the myriad of gesture that reveals itself in an abstract expression is unconscious feelings that result from a life experience. For the Abstract Expressionist painter, the canvas is an extension of the artist’s mind where they explore issues of personal and social identity.

In her artist statement, Ms. Freedman explains, “My intention is to allow the painting process to lead the way opening up the work to wider questions, political and social….The physicality of the paint joined with resultant symbols creates a narrative and dialog between self and materials, revealing a personal history that remains ambiguous. The resultant images are mostly abstract, but, in fact, are based on the constant inquiry into the reality of life experience.” 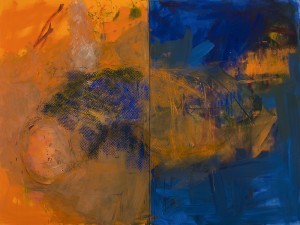 In the large two-sectioned painting, He Said, She Said, Ms. Freedman juxtaposes complementary colors in a type of imagery where the foreground and backgrounds are reversed. The textured surface using a blue pattern invites the viewer for closer inspection, questioning where there is an object present. The opposing forces create a tension that provides the viewer with its power and intrigue. Ms. Freedman describes her work as ambiguous, and there in lies the meaning…different for each viewer.

Marcia Freedman holds an MFA from Wayne State University and has been exhibiting in the Detroit Metro area since the mid-1980. Her work is part of numerous public and private collections.