Though I flatter myself that I am a somewhat avid runner and yogi, I was not prepared for the hardcore booty-shaking that artist Jessica Frelinghuysen led her audience through at the opening of her new show, “It’s Exercise Time!” last Friday at Popp’s Packing art space in Hamtramck. I guess at such events my body is in rest-and-present-yourself-well mode, most of my energy going into chit-chatting and craning my neck to get a glimpse of the work on display around the clusters of opening attendees. One doesn’t stand by and observe at Frelinghuysens performances, however. Indeed, the very designation of “audience” collapses before Frelinghuysens’ boundless energy, quick wit, and all around fantastically grounded presence. It’s also a safe bet that you’ll find yourself diving into some activity that you wouldn’t hitherto have dreamt of doing in a gallery setting- which is exactly the point.

The walls around the gallery were posted with Trail Fit-esque exercise instruction graphics explaining how to properly do lifting reps with large bags of rice and knee-lift-and-punch sets while singing along to “Eye of the Tiger” (which happened to be playing over the sound system while I read that particular instruction- the invitation became irresistible.) Interspersed between instruction graphics were surprisingly lovely photographic portraits of Frelinghuysen going through her workout paces at many unconventional sites around Hamtramck- tossing sides of meat in Bozek’s meat locker and lifting a huge bag of onions outside Al Haramain Market. She told me a funny story about that moment- as she struggled to lift the unwieldy sack, a man in very conservative Yemeni dress pulled up and parked right in front of where she was lifting. He watched, without budging from his car, and when she finally got the fifty-pound bag lifted over her head, he burst into a sudden round of applause. It seems Frelinghuysens’ energy is just as infectious outside the gallery space. 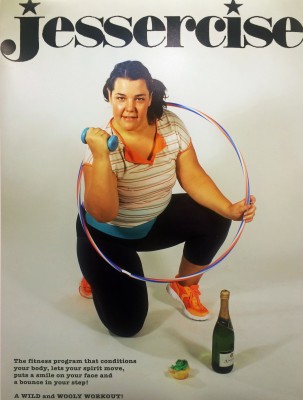 “It’s Exercise Time” has transformed Popp’s art space into one easily mistaken for a small, mom-and-pop gym, except for the bottles of champagne that are there for both lifting and drinking purposes. This effect was pushed still further at the opening, as folks gathered around Frelinghuysen while she mounted the carpeted platform, dressed in full rainbow-hued workout regalia. She proceeded to lead us in a lengthy, fast-paced, serious cardio workout that had me out of breath inside of three minutes- Frelinghuysen broke a sweat, loosened up and launched into the next round of time-steps and air punches. Here the long tradition of displays of endurance in performance art was channeled with a lightness and hilarity that suited the bright palette and self-deprecating humor of Frelinghuysens’ exhibition. One by one, audience members were drawn into participation, as enchanted by the artists’ unaffected, funny, down-to-earth performance style as that man outside al Haramain Market. The total (and somewhat surprising) absence of irony in Frelinghuysens’ manner helps, as well. In a setting where people tend to be very concerned about how they appear, the extent to which we all followed her example, cutting loose and just having fun with our bodies, was a revelation.

All of the best performance artists I’ve seen in action assume characters that are somewhat amplified versions of themselves. Frelinghusen is a natural at this. While her performances certainly bear a trace of the theatrical- she assumes a particular garb and enters her performance space, be it the gallery or city street, with a point to make- she inhabits them in such a way that she never stops feeling present, accessible, to her audience. Significantly, she refers to the clothes she designs and wears for her performances as “uniforms” rather than costumes. This points to the importance of the uniform as an entry point, cultural signifier, and problem-solving accessory. Frelinghuysens’ many bodies of work all have a problem to be solved as their starting point. Her ongoing “Paper Helmets” series aims at solving problems of personal communication; her “Coffee Cart” performance at Cranbrook aimed to remedy the absence of available coffee for Cranbrook students and staff. “It’s Exercise Time!” makes up one part of her exploration of a somewhat more complex problem- the vast divide between “art” space, and the rest of the world. 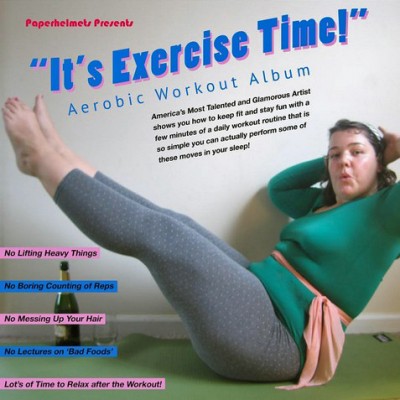 Her impetus to dovetail gym culture with gallery culture, she told me, lay in her long-standing, serious commitment to both worlds, and how odd it seemed that her social life in the gym was so completely different than her social life on the art scene, when the two disciplines (of the body, on the one hand, and the studio on the other) bore such a close resemblance to one another. She pointed out that endurance, commitment, and serious play are all common factors between the two worlds. That resemblance extends to the aesthetic, as well- she noted how the white, clean walls of the gallery closely resemble those of the gym. Transplanting the gym to the gallery, with a veneer of humor over seriously exploratory intent, proved delightfully disruptive to the usual flow of an art opening. Frelinghuysen manages such actions with a light, humorous touch which leave people in the art world and outside of it feeling tickled and intrigued, rather than confused and defensive. She noted, “If it’s disrupting everyday life a little bit, then I’m interested in it.” Disruption is the calling card of so many performance artists- not so many manage to channel it into actions for positive engagement and change that flow identically inside and outside traditional art-viewing spaces. Frelinghuysen has already moved past those boundaries- and is playfully beckoning us to follow.

30 Americans @ the Detroit Institute of Arts