50 years @ the Detroit Institute of Arts 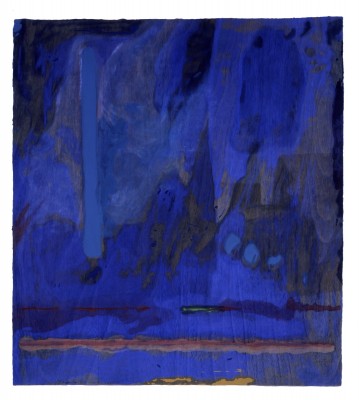 At the center of the City of Detroit’s heart is the Detroit Institute of Arts (DIA). For many reasons, including its world famous collection, exhibitions, events, film theater, classes and workshops, the DIA serves as an aesthetic anchor to the entire metro Detroit area.

The December 15, 2015 opening celebrates the DIA’s 50th anniversary of one of its long-standing auxiliary support groups, Friends of Prints, Drawings, and Photographs (FPDP) with an exhibition curated by Nancy Sojka, head of Prints, Drawings and Photographs. The exhibit, 50 Years of Collecting Prints, Drawings and Photographs, marks her retirement from the DIA where she has worked since 1988. During her tenure she has organized more than 40 exhibitions from the DIA’s collection, including Ordinary People by Extraordinary Artists: Works on Paper by Degas, Renoir, and Friends (2014–15), Picasso and Matisse: The DIA’s Prints and Drawings (2012-13), Government Support of the Arts: WPA Prints from the 1930s (2009–10), The Big Three in Printmaking: Dürer, Rembrandt and Picasso (2006); Martin Lewis: Drawings and Related Prints (2000); Prints by Terry Winters: A Retrospective from the Collection of Robert and Susan Sosnick (1998–99), and Prints and Drawings in the Age of Rubens (1994).

“Over the years Nancy has organized dozens of exhibitions drawn from the museum’s rich collections of prints and drawings,” said Salvador Salort-Pons, DIA Director. “While we will miss Nancy’s ingenuity and expertise, we wish her the best in her retirement.”

“During her tenure at the Detroit Institute of Arts, Nancy Sojka has provided passionate scholarship, connoisseurship, and exposure of the graphic arts to an expanding citizenry from the Michigan counties of Wayne, Oakland and Macomb and museum attendees from far beyond Metropolitan Detroit.” says Norm Stewart, Director of Stewart & Stewart.  “The exhibitions she has presented in the Schwartz Graphic Art Galleries represent a curator with exceptional knowledge of graphic arts history, a keen awareness of contemporary graphics, and an understanding of the developing technologies that will shape what is to come.”

The exhibition provides a small glimpse of the complete collection showing 125 art objects, (from a collection housing approximately 35,000 objects, that breaks down to 10,000 photographs, 10,000 drawings, and 15,000 prints) which includes a good number of local artists.

Commenting, “The exhibit, What’s New – Recent Acquisitions in 2004 was evidence of the adventurous way in which Nancy grew the collection of art on paper at the museum. Nancy was very supportive of the artist’s in Detroit who worked on paper and I am deeply appreciative for her support over these many years.” by Doug Semivan, Art Chairman of Madonna University. 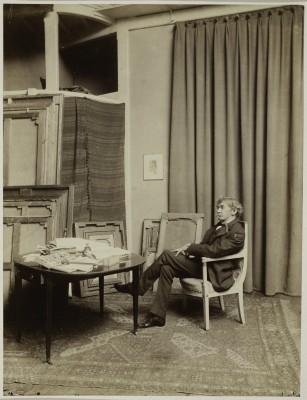 French photographer, Paul Francois Arnold Cardon, or Dornac, specialized in personalities, and took this 17 X 14 photo in 1892 using the albumen print process mounted on board. The photo captures a rare moment of James A. M. Whistler, the American-born, British-based artist in his studio whose Yellow House, Lannion is also part of the exhibition. This image is a moment in time just as the art of photography starts to develop throughout Europe. The photograph was a gift of Leonard and Jean Walle.

The Hungarian photographer André Kertész spent many years in Paris and is known for his aerial black & white compositions that often capture the effects of low light casting long shadows on his subjects. After his education in 1912 at the Academy of Commerce in Budapest, he eventually found his way to Paris, where he spent the majority of his life producing portraits, streetscapes and distortions. When I visited the Getty Museum in 1996, the museum had recently purchased all of his remaining work and had just mounted a retrospective. Kertész brought a unique vision to the art of photography and influenced generations of photographers that followed. 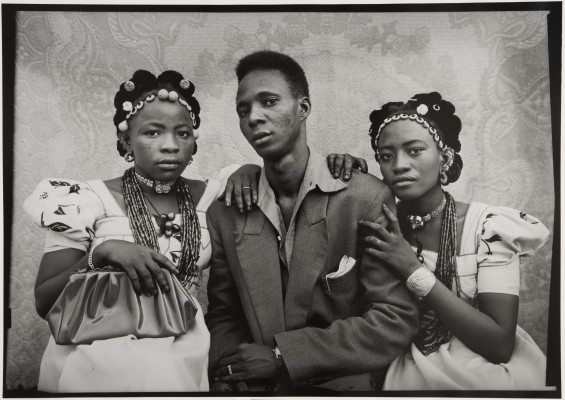 The untitled 24 X 20 photo print by Seydou Keita typifies the work by this photographer from Bamako, Mali who spent much of his life photographing the people of this once-French colon. The self-taught photographer was introduced to his Kodak Brownie Flash camera in 1935 by his uncle and went on to pursue a career as a professional photographer. His strict sense of formality is combined with his ability to develop a level of intimacy with his subjects and capture a moment that withstood time. This photo was a museum purchase, with funds from William and Ellen Kahn. 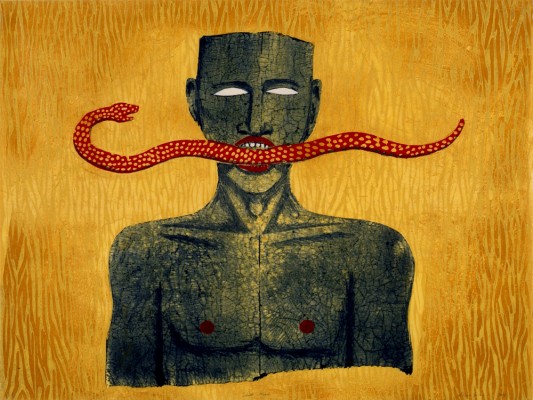 A younger artist from the west coast, Alison Saar, has created a color woodcut and lithograph, Snakeman, 1994, (a gift from Marc Schwartz). She is a well known African-American artist whose work explores themes of African culture and spirituality. A recipient of a Guggenheim Foundation fellowship and a fellowship for the National Endowment for the Arts, Saar’s work has often included a variety of materials (bronze, lead, tar and wood) with which she creates a highly personalized amount of cultural context in her painting, sculpture and print formats. 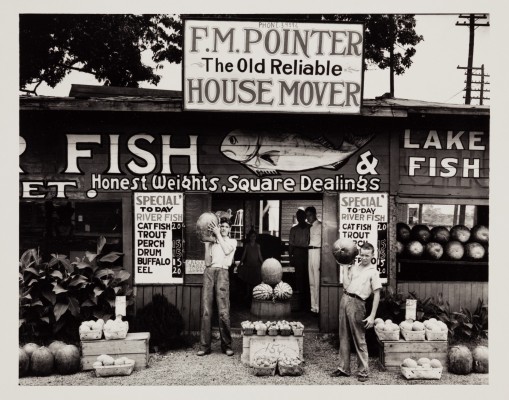 It could be said easily that Walker Evans is one of the most influential artists in the twentieth century and the progenitor of documentary-style photography in the United States. Although I had read about his work during my college years, it was the retrospective of his work at the Metropolitan Museum of Art in New York City in 2000 that left an indelible impression. Born in St. Louis, Missouri in 1903, Evans spent a year at Williams College where he indulged himself in literature and where he first envisioned himself as a writer. Fortunately for the art world, Evans gradually redirected himself toward photography. His lifetime of photography took him through the Depression years during which he worked alongside Dorothea Lange, Arthur Rosthstein, and Russell Lee as part of the government New Deal agency. He had been assigned to capture the essence of American life. His black & white images were of people found along the roadside, cafes, home interiors, and small town main streets. The photograph, Roadside Stand, from 1936 is a gift from Beverly Franzblau Baker, in memory of Morris D. Baker.

This aquatint and dry-point print from the work of Richard Diebenkorn, Folsom Street Variation III, 1986, gives us information about a West Coast abstract expressionistic painter who also engaged in printmaking. Best know for his abstract landscape series, Ocean Park, Diebenkorn’s work seems rooted in the outside world. His works on paper also included drawings using gouache and crayon, but it is his large body of painting that retains a quiet and distinctive intensity while presenting the viewer with an informal use of space, as oppose to, say, Piet Mondrian. The print is a gift from Dr. and Mrs. Robert J. Miller and Dr. and Mrs. Robert Moss.

The 125 pieces selected by Nancy Sojka and her staff for the exhibition 50 Years of Collecting Prints, Drawings, and Photographs serves as a nice send-off for Sojka and her years of work at the Detroit Institute of Arts. In this exhibition, she pays some attention to the Detroit artists in the collection, including Stanley Rosenthal, Janet Hamrick, Bill Rauhauser, Norman Stewart, Dave Jordano, Doug Semivan, Susan Campbell and others. As the public focuses on exhibitions of painting, sculpture, film and installation, let us not forget about the drawings, various print forms and photographs that rest in this grand collection at the Detroit Institute of Arts.