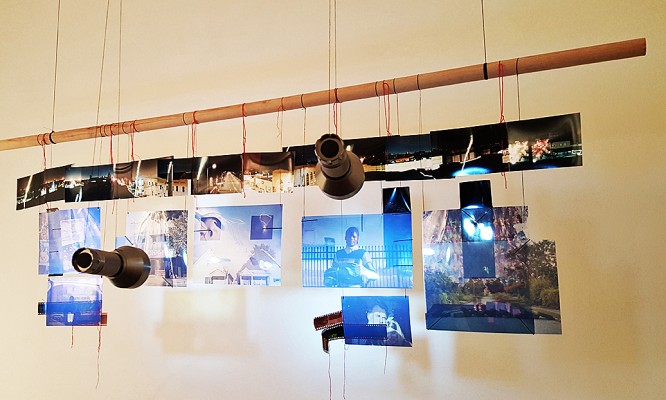 The stated objective of Photo Pool: Photography Based Art Beyond Photographs at Public Pool is clear from the title—Curator Noah Elliott Morrison has assembled a collection of artists attempting to use photography as a jumping-off point for artistic exploration that goes beyond the conventional boundaries of the medium. In this respect, the show is very successful, with five artists (including Morrison) that take their photographic inspiration in wildly divergent directions. 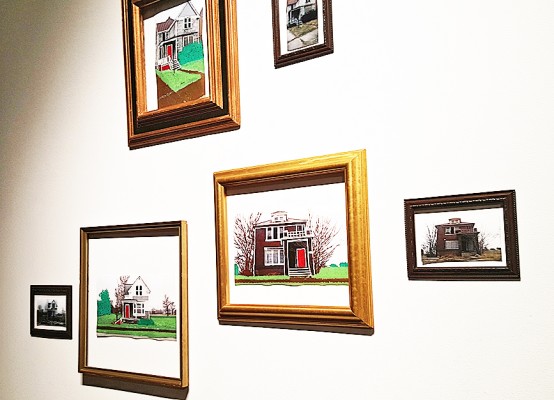 The immediate impulse is to place these presentations into a kind of hierarchy of relative closeness to conventional photography, but the impossibility of doing so reveals the success of Photo Pool in collecting artists that both embrace the photographic medium and consciously dismantle it. Brandon Christopher, for example, begins with relatively straightforward portraits of abandoned Detroit homes, but violates the purity of these as photographs by pairing them with colored-over versions of the same images, effectively rendering the homes as though drawn by an imaginative child. 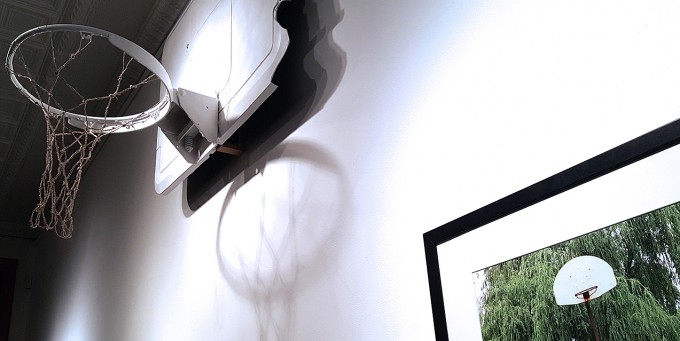 Ash Arder uses photography as a logical means for documentation, in her explorations of found objects in and out of context. In “Net Worth 1,” a photograph features a rusty basketball hoop on the street, displayed in juxtaposition with a white-washed version of a similar hoop, its makeshift net hand woven from stinging nettle fibers. Nearby, a second piece of the installation titled “Strange Fruit” is comprised of a set of three (faux) red apples suspended within another matrix of nettle fibers; close viewing reveals a barcode sticker with the unmistakable Air Jordan logo visible through the loose knit of nettles. As with Christopher’s work, the photographic elements ground the subject in physical reality, even as Arder begins to weave these elements of the material and cultural world together to paint a sinister tale. 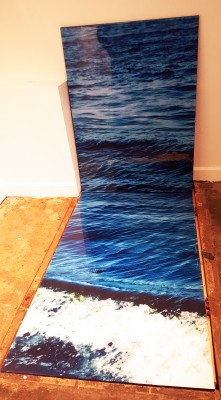 One might argue that Trisha Holt’s piece, which sits a floor level, is the most directly photographic. It appears to be a largely unaltered image of a large body of water in two segments—the serene surface stretching back to fill the plane of an image leaning against the wall, a small wave cresting to break within the piece lying flat on the floor. But Holt’s use of these two vectors plays a neat trick of incorporating this incongruous image seamlessly into the gallery space, having cleverly fitted her floor piece into the trap door that enables basement access from the gallery. Holt’s work often negotiates new dimensionality in photography, playing off the odd tricks of perspective that occur when photographs with their own depth are reincorporated into new images (much like the dislocating effect of posing for a picture next to a cardboard cutout of a celebrity). Her piece manages to create a sense that the wave might break across the gallery floor at any moment. 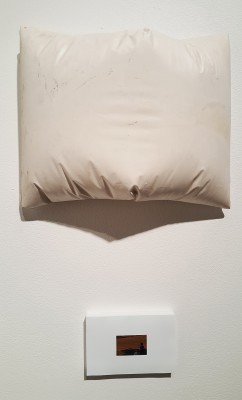 Challenging as they are understated, an installation of pieces by Ben Saginaw fall perhaps the farthest outside conventional photography—a great achievement in a show filled with mixed media. Two pillow forms cast from dense plaster are on display above two small photographs that feature indeterminate scenes in progress; in one, a small girl appears to be shooting a handgun. The pillows, which are ostensibly soft and harmless, are in fact heavy. The girl, Saginaw states, is shooting cans with her family on a summer evening in Detroit. So close to the anniversary of the death of Tamir Rice, a young boy shot by police for playing with a toy gun in the open-carry state of Ohio, the image cannot help but remind us the high stakes surrounding what we think we see, when we see things.

Suspended before the gallery’s back wall is Morrison’s own work, which layers semi-translucent photographic images taken in Hamtramck into a dense patchwork of visual information, lit up by a hovering flock of flashlights. Morrison’s intention was to create a metaphor for the densely layered qualities of life in Hamtramck—the installation is best viewed from behind, as the flashlight beams enhance details from each layer that remain distinct in the visual chaos.

From lake views, to the comforts of home, to life on the streets, Photo Pool: Photography Based Art Beyond Photographs lives up to its title in a focused and satisfying way that leaves this reviewer itching to revisit the medium.

50 years @ the Detroit Institute of Arts