Oakland University Art Gallery invites the audience to an installation that includes objects and performance. 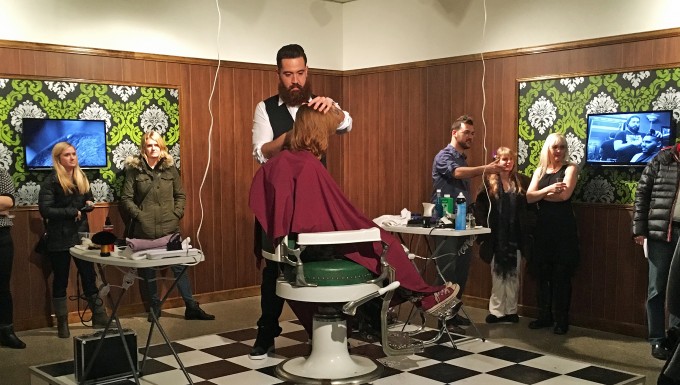 The installation work by Carlos Rolón/Dzine at the Oakland University Art Gallery is called Commonwealth and was created by this first generation Puerto Rican artist from Chicago.

Its title makes reference to the Commonwealth of Puerto Rico, a self-governing unit voluntarily grouped with the United States even though it remains an independent country. A post-colonial perspective melds Rolón’s memories of his youthful Hispanic cultural that includes a diverse hybrid of carefully crafted objects, installation, and performance that inform his work.

One entire gallery space is devoted to the re-creation of a 1940’s urban Barbershop that includes wall paneling, flooring, barber’s chairs and four surrounding video panels that display the hair cutting process. Rolón says “My intention is to introduce the Barber as artist/sculptor and how the barbershop creates a home and safe-haven to allow for freedom of expression.” The site-specific installation is inspired by a photograph by Jack Delano, Barbershop in Bayamon 1941, and on the opening night, two barbers were on site to provide haircuts to attendees. My interest was piqued because of my relationship with the Puerto Rican culture after having been immersed via my marriage for forty years. The food, music, religion and way of life have been part of my life since the early 1970’s. 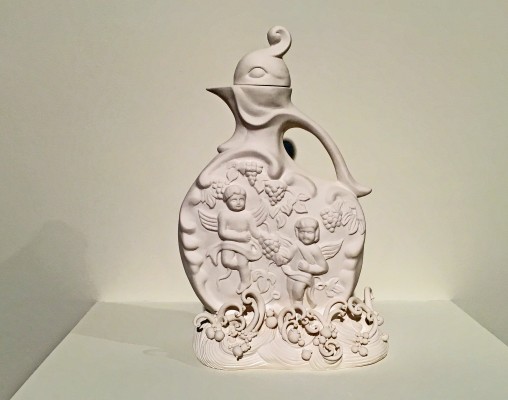 The porcelain vase/pitcher was designed by Rolón but produced in China and replicates some of the faux objects his mother collected when he was a child. For a family steeped in religious traditions, these type of porcelain objects represented high cultural art based on objects that you might think belong to an aristocracy, as do silk flower arrangements and clocks imbedded in ceramic frames. Adding these types of objects to the exhibition recreates markers or icons within Hispanic cultural traditions. Typically, these pieces were on display in ornate wooden display cabinets along with wedding favors and family photographs, all part and parcel of the culture. 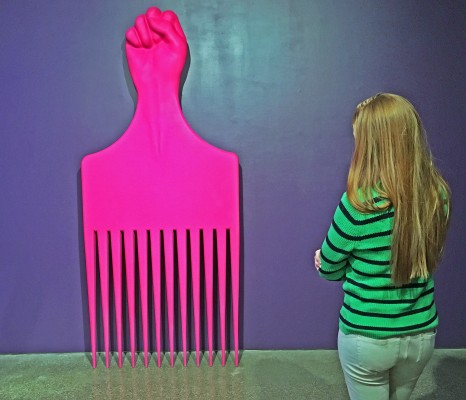 Included in the exhibition is a large and carefully crafted ‘pop art’ object, the Afro hair pic that includes a clenched fist as part of the handle, both symbols during the 1970s in urban cities. The cultural object here is used to shape hair and represent the Black Power Movement, prominent in the struggle against the establishment and a promotion of self-determination. This is yet one more part of Rolón’s installation, creating an environment that paints a picture of his early personal and cultural memories. 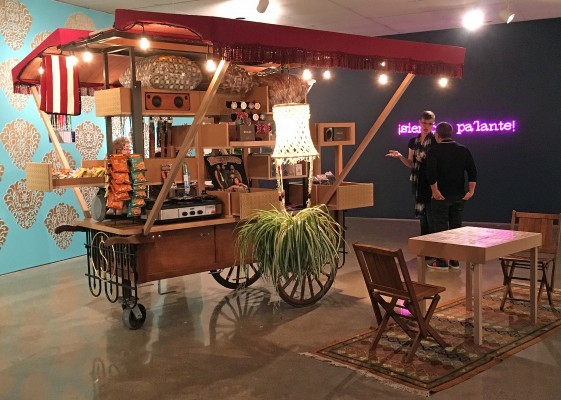 In cities like New York or Chicago, there was a time when the vendor cart was commonplace. These carts represented all kinds of ethnic food, from hot dogs, pretzels, bagels, and blintzes to the Hispanic cart that sold tostones, empanadas, fritas and pasteles. The nomadic vending carts were located in neighborhoods where people sought a bite on the go. In his piece, Nomadic Habitat, Carlos Rolón/Dzine intentionally uses the memory of the cart to recreate a replica as a symbol of his cultural. First on exhibit in “The Potential of Spaces: The Arts Incubator helps bring the Chicago Architectural Biennial to the South Side” from the Chicago Art Institute, the piece articulates the relationship of culture to the community.

For me, writing about installation and performance art feels a little like a rubber band, causing this writer to stretch his experience to include new and emerging forms of artistic expression. Certainly there is a tradition in installation that includes British Artists Andy Moss, and Jamie Wardley, who created The Fallen, a visual display at D-Day landing on the beach of Arromanches in France, and Rain Room, by Berlin-based collective Random International where at Rice University you experience the rain without getting wet. Most recently at Art Prize 2014 in Grand Rapids, Michigan, Anila Quayyum Agha’s installation Intersections, casts a delicate web of shadows by filling a room with carefully crafted patterns from a laser cut wooden cube powered by a single light source. The result was a room illuminated with lace-like geometries cast onto the surrounding walls, and like Carlos Rolón/Dzine, she says, “For me the familiarity of space visited at the Alhambra Palace, created memories of another time and place from my past.” Both artists used memory and culture to form their biographical oeuvre.

Perhaps this brings me to the role of the Oakland University Art Gallery in exposing its audience of students, faculty and community to new trends in all forms of art, free from commercial purpose. The Oakland University Art Gallery has been leading in this respect for a number of years and continues to set the bar for others. University based galleries have the financial base to support such important endeavors and play an important role in educating the community in Metro Detroit.