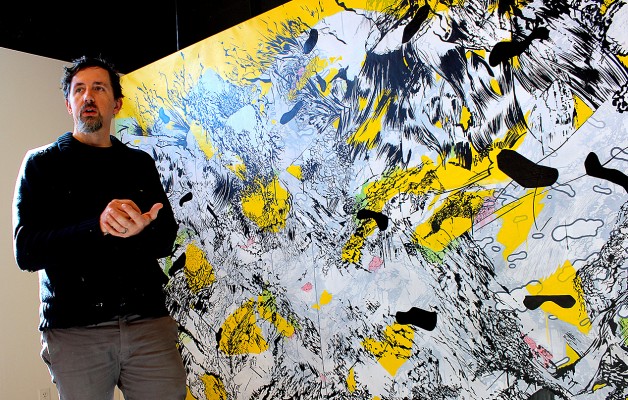 Matthew Bandsuch during his artist talk, alongside Pile, the largest work in the show, which took him months to execute

Artist Matthew Bandsuch has a successful career as an illustrator, providing satirical and figurative visual components to national publications including The Washington Post, The New York Times, and The LA Times, and local ones such as Hour Detroit Magazine. The Detroit native and CCS graduate relocated to Chicago in 2001, and in addition to his illustration work, has nurtured a painting practice that has yielded inclusion in shows around Detroit and Chicago. “THE WAY NOT THE WAY” is a solo show of recent work exhibited at Popps Packing from March 26 through April 16, and demonstrated Bandsuch’s range as an artist and obsession with process. 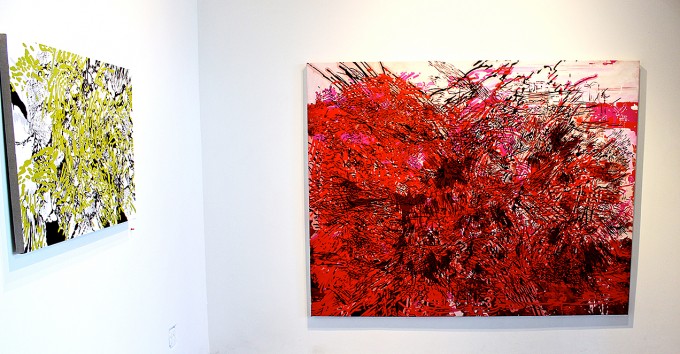 Matthew Brandsuch, It is so. (left) and Brunt, oils on linen

The large-scale painted drawings (Bandsuch prefers to consider them “drawings” although they are made with paint on canvas) are filled with layer atop layer of visual noise, and would be arresting on their own, but are especially surprising in contrast to Bandsuch’s very legible work as an illustrator. When you consider that the definition of illustration is to illuminate or clarify a subject through visual example, Bandsuch’s paintings reveal a shadow side to his strengths as an illustrator—that of an abstractionist. During an artist talk for the show’s closing on April 16th, Bandsuch outlined the process that inspired the body of work on display, beginning with a single sculptural work—a smooth-planed and geometric “model of a rock” made from anthrachite coal, that he replicated in folding-paper form. Looking at the cut marks left behind in the process of creating the paper cutout, Bandsuch found the shapes that became the basis of abstract quasi-naturescapes that are the foundational imagery of the paintings on display. This source image allowed for Minimalist and reductive elements, as well as subject matter as close to meaninglessness as possible—a concept that again demonstrates an alter-ego alive within an illustrator soul. Bandsuch is not concerned with conveying meaning through these works, nor is he interested in the surface texture or color theory of painting (all of his colors were straight from the tube, or perhaps slightly mediated with white)—“THE WAY NOT THE WAY” is a deep meditation on process, resulting in imagery that illustrates a genealogy of mark and line, where each subsequent iteration between media or added layer inherits something from its predecessor, both replicating and altering it. 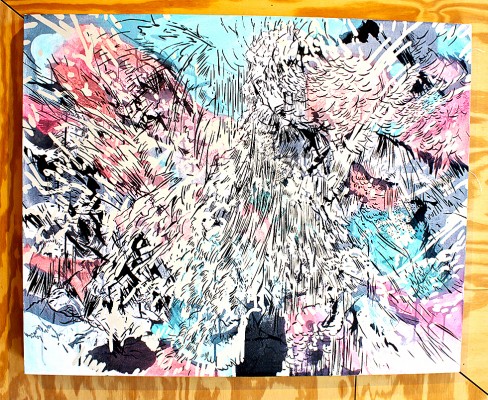 In this way, each painting is like a network of memory  —wherein the original experience is altered each time it is recalled, adding or deleting pieces and reunifying them into the perceived memory. Several of Bandsuch’s pencil-on-paper drawings—“unintentional landscapes,” as he calls them—are on display, alongside the largest work in the show, a staggering wall-sized canvas in graphic black and white, with bold splashes of yellow. These and other drawings are translated to digital images, and sometimes painstakingly layered in Photoshop, before being projected directly onto canvas for transcription to the finished pieces. “As I’m going through, things are working or things are not working,” said Bandsuch, during his talk, pointing out the inevitable emergence of quasi-figurative elements; here a snippet of what looks like traditional Japanese wave painting, here a cartoony little face, here a cloud. As Bandsuch creates the paintings, he makes decisions to play up the chance elements, resulting in finished canvases that cannot be directly traced back to any single image, but represent the full inheritance and mutation of their genealogy. In the same way it might be considered that our bodies are really just vessels for genetic strains that connect us to the whole of human history, Bandsuch’s canvases might be considered vehicles for ideas that are riding through various physical manifestations throughout the whole of art history. 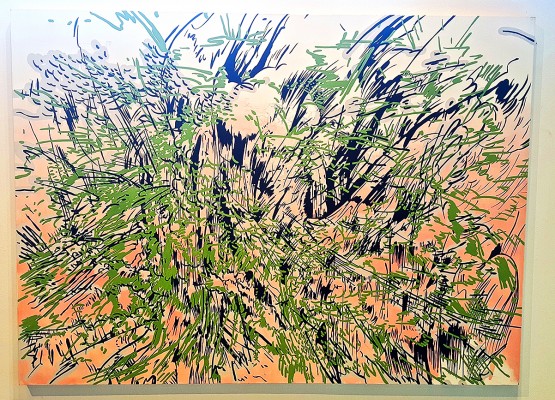 The intensive work of meticulously shepherding these forms speaks to Bandsuch’s dedication and his obsession with the underlying processes of making. His artist talk makes it evident that this is a labor of love, which takes on new depth and literally increasing dimension at every turn. To borrow a phrase, it might be said of “THE WAY NOT THE WAY” that it is a true demonstration of journey as destination.