“As Above, So Below” –  Kimia Ferdowsi Kline and the wise conduct of life

The culmination of Kimia Ferdowsi Kline’s residency at Wayne State University, funded through the Basil Alkazzi Detroit Residency and the New York Foundation for the Arts, is a jewel-like array of visual storytelling that is currently on display at Elaine L. Jacob Gallery at Wayne State University. The impressive body of work revolves around a famous book of fables, Kalila and Dimna, in which a succession of interrelated stories featuring animal protagonists unfold, like Russian dolls, one emerging from the next. This foundational group of stories, originating in India and evolving through Persia, became the inspiration for the fables of Aesop and the Brothers Grimm, among others. Kline’s appreciation for the ancestry of a work of art is apparent, not only in her choice of subject matter, but in the conscious homage she pays to such painters as Henri Matisse, David Hockney, and Richard Diebenkorn in her lush, engaging work. 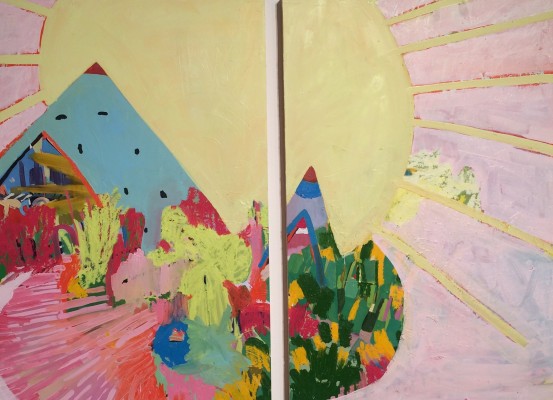 The fables become a narrative clothesline on which Kline strings visual flights of fancy rendered in a vibrant California palette (Kline earned her MFA at the San Francisco Art Institute and speaks eloquently of her love for the California painters and their granddaddy, Matisse.) The paintings themselves strike an exuberant balance between Modern Western painting (Matisse’s abstract, sublimely lit grids, Diebenkorn’s broad fields of pulsating color that congeal into horizon-less landscapes) and the illustrative tradition of illuminated Persian miniature paintings (the collapsed, vertical placement of figures and movement that propel a story from one frame of action to the next, and that influenced artists of Matisse’s generation to free themselves from the shackles of Western linear perspective). Kline is just coming into the full flower of her abilities, and slings the paint with a joyful abandon that projects a moment to moment experience of absorbing, and distilling, her subject and her influences. Her smaller paintings are bombs of formal beauty and technical virtuosity- the off-hand yet incredibly nuanced treatment of the female figure in “Woman Bathing Two Jackals” kept beckoning from the corner of my eye as I perused her larger pieces, drawing me back again and again to wonder at the light-hearted, yet incredibly serious montage of symbols dancing around the picture plane. 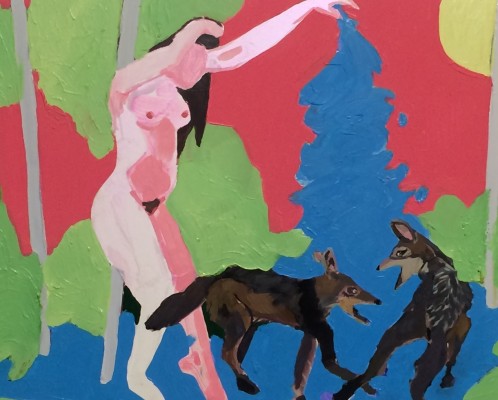 “Pomegranate Warrior” gave me the same experience, with a cinematic twist, following the rider out of the picture plane and into unknown regions. Kline’s best work in “As Above, So Below” does exactly that- engages the eye with the unbridled joy of her palette and dynamic composition, then subtly embeds itself in the subconscious for later unpacking.

The title of Kline’s show, “As Above, So Below,” derives from Hermetic teachings about the nature of the universe. According to this philosophy, the individual is a microcosm of the universe, and the raw material of everyday existence bears within it the traces of the divine matter from whence it came. This divinity is parsed as it makes its descent through the ages, picking up influences from history and experience. Kline’s work is a perfect visual distillation of that idea- she continually weaves fresh content from the materials and narratives of her ancestors, cultural and artistic. Her work is a refreshing reminder of all that we still have to sift through and re-arrange from the wisdom of those who came before us- and the myriad paths such a practice can help us to experience. 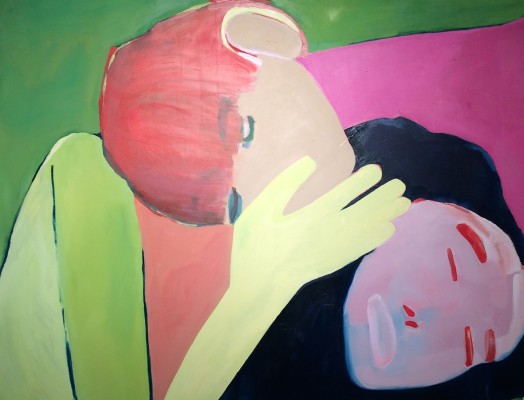 “As Above, So Below” is on view at Elaine L. Jacob Gallery at Wayne State University, Detroit, MI, through June 24, 2016

Dance! @ The Detroit Institute of the Arts