Architecture of the Soul in a Serendipitous Space

Holding House, an art/work space two years in the making that began engaging with art and community in Southwest Detroit in 2013, has been fashioned, roots up, from a gutted storefront (shuttered in 1978 and not re-inhabited until co-directors Andrea Eckert and Adrienne Dunkerley took it on) into a magnificent, light-filled space that still retains choice features of its former identity. Its roomy, raw-edged gallery is the absolute perfect setting for Simone DeSousa’s new solo exhibition, “Calculating with Absence.”

“Calculating with Absence” is installed, and should be viewed, from the roots up. The denser, slightly older works installed in Holding House’s lower level comprise a sort of prima materia which bursts, on the gallery’s main floor, into a constellation of airier, more succinct works that take the viewer on a meditative journey through space, silence, and the evocative, multivalent power of the gesture which stands alone. 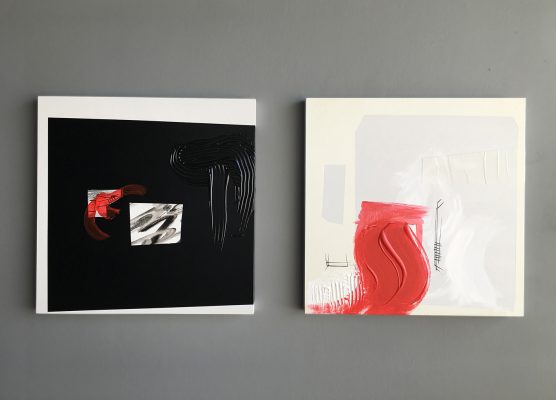 Simone DeSousa, “Calculating with Absence (The Temple of Bliss and Emptiness 1 and 2)”, Acrylic on Panel, 2016

DeSousa’s early career in architecture is evident in her work- abstract and sharply minimal as it can be, it speaks in the silent, echoing language of space. The more built-up works read like cityscapes, layers of geometric forms and linear gestures crowding the picture plane, built up with industrial surface texture- swirls of resin and caulk. Some of those same textures appear in the quieter works, where they are accompanied by the barest of architectural scribbles, or simply given an unconventional format for a setting- DeSousa’s panels bend, nick off at corners, elongate, and spread along the gallery walls more like evolving visual conversations than self-enclosed paintings. 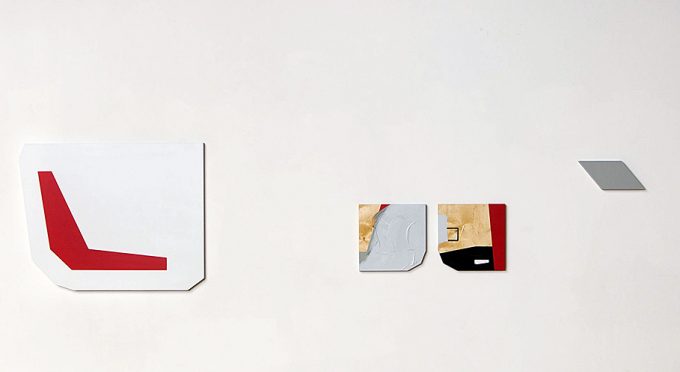 The power of the gesture is uniquely engaged in this format. As immediate as the forms in these paintings feel, their surroundings are carefully considered and have great bearing on how each gesture reads, and moves out into its surrounding space. The cohabitation of DeSousa’s textural swaths with delicate architectural elements suggest both massive scale and confusing layers of space. 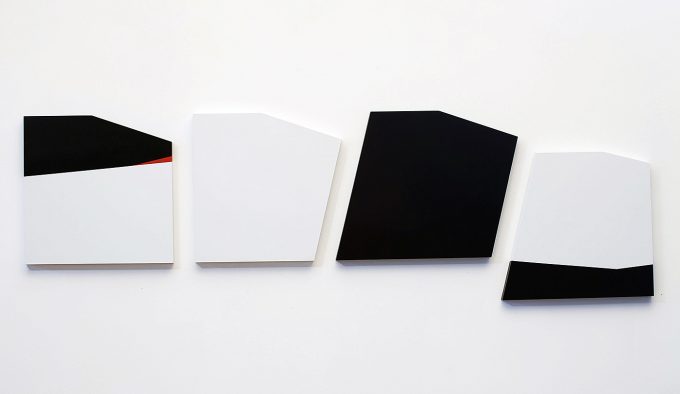 Simone DeSousa, “Calculating with Absence (Base, Path, and Fruit)”, Acrylic on Panel, 2016

Seen as forms within pictures, the gestures rupture the quiet recession of space suggested by the drawing, like a sudden realization can rupture a settled sense of reality- conversely, seen in the context of the gallery space, the gestures project from their oddly shaped receptacles to create visual rhymes and dialogs with the surrounding architecture itself. Here is the serendipity of the show’s setting- the exposed beams and raw, plastered edges of Holding House’s interior draws DeSousa’s one-shot gestures out of their pictorial settings, and sets in motion a parallel, but separate dialog with actual space, fostered by the ever-finessing nontraditional formats on which she works. In “Calculating with Absence,” DeSousa has accomplished something very special and rare- two dimensional works that simultaneously dialog with, about, and into three dimensional space while maintaining their own autonomy as beautiful, sharply composed paintings. As a long-time fan of her curatorial prowess at Simone DeSousa Gallery (formerly Re:View Contemporary) in Midtown, I guess I shouldn’t be surprised that DeSousa brings as much clarity and power of vision to her studio practice. I sincerely hope we get to see more of this side of DeSousa’s practice in the future.

“Calculating with Absence” is on display at Holding House through June 10, 2016.

“Pictures of You” @ David Klein Gallery