Red Bull House of Art has made its name in Detroit by showing some of the most cutting-edge young artists in town. Now, as the residency/gallery space transitions to get an international influx of artist in the mix, a palette-cleansing show, 15 Steps: Perspectives in Drawing, curated by local artist and organizing powerhouse Tylonn J. Sawyer brings the focus back to the basics of drawing. 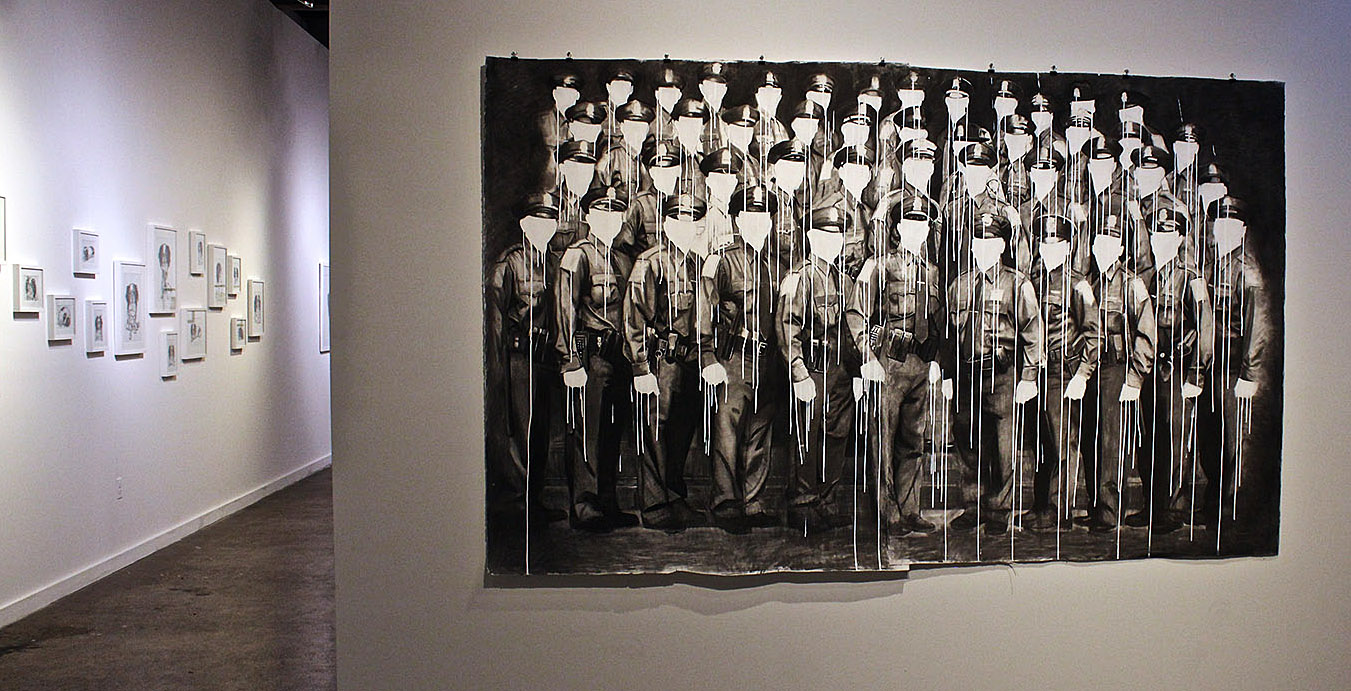 “When I lived in New York, I attended drawing shows all the time, yet I can’t think of any in the surrounding area, other than the DIA Drawing and Prints gallery,” said Sawyer, regarding his motivations for the show’s theme. “Drawing is very instinctual practice. As children, we are compelled to pick up crayons and scribble. Early on in mankind people felt the need to record their daily lives on caves as in parietal art.  I think there is an honesty in drawing and in the process of drawing.  To do it well takes repetition, practice and caring.  For many of the artists (in this show), drawing is not their primary art form, but it remains somewhere in their creative process.” 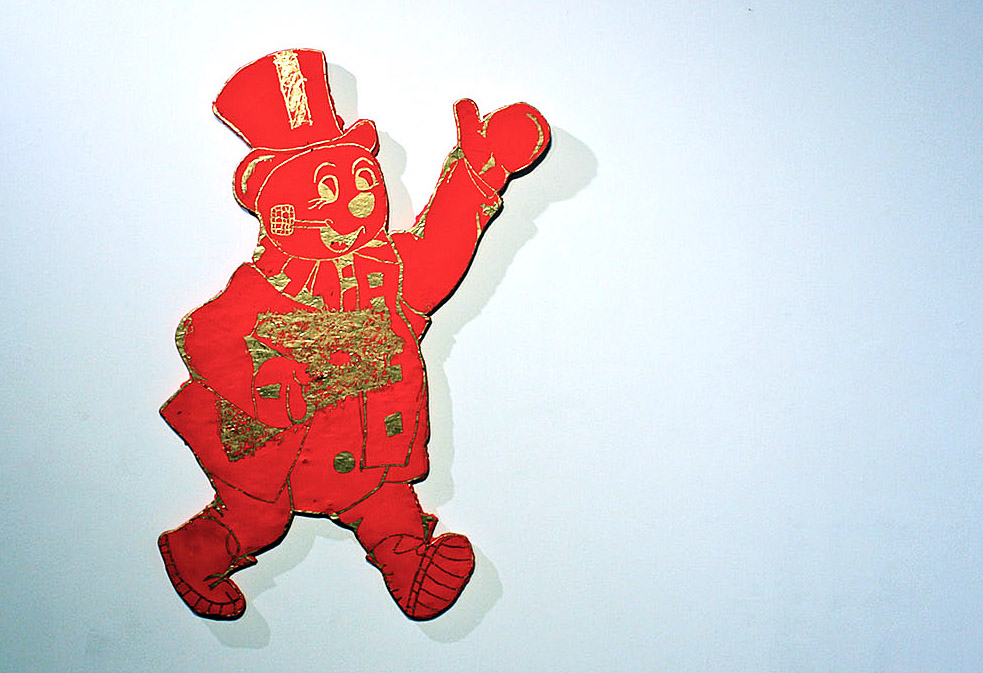 Despite its thematic foundations in drawing, the show has some unexpected outcomes as the result of these various creative processes, including an augmented piece of found object art by one of Sawyer’s fellow MOCAD employees, Leto Rankine, and a breathtaking large-scale print work by Detroit newcomer and CCS Professor of Fine Arts and Printmaking, Tyanna Buie. Buie’s piece, Class Portrait, works from imagery lifted from one of her own childhood class pictures, universalized by the obscuring of the facial features of the children pictured, yet still somehow achingly personal.

“What prompted me to make this particular piece was my response to what is happening within the public school system in our country, but specifically in Detroit,” said Buie. “My memory of my time in a public elementary school in Chicago, IL, was not made clear until I received documentation of my achievements and class photographs from that school. I thought the schools that I went to was not special and didn’t teach me anything of importance. However, once I looked at the class photo, I began to analyze it…I realized how much the principal took pride in the school and how the teachers worked hard to make sure we also had a since of pride in ourselves. The school I once went to from 1990-1993 is still standing, but is now a charter school. I wanted to make a piece that would give a subtle nod to public schools for making a difference in our communities through the children despite the many challenges faced.”

By what Sawyer characterizes as the “happiest accident ever,” Buie’s work is directly in conversation with a large-scale piece by Sawyer himself, which applies a similar technique and aesthetic to a large-scale class portrait of another kind. “In Cabal: Class of 2016, I am presenting the institution of law enforcement standing tall and proud as one collective or brotherhood, ready to do their sworn duty to enforce the law of the land,” said Sawyer in an artist statement about the piece. “Yet we live in a time where literally hundreds of videos and news reports highlight police officers behaving less than professionally, and the majority facing no consequences. I imagine the institution of law enforcement struggling to maintain integrity in the public eye, and this struggle visually manifesting itself in the form of officers physically falling apart or melting away. I purposely removed all the faces because when I think of police officers, I don’t think of them as individuals, but rather parts of a whole.”

Other contributions to the show are more lighthearted and more strictly limited to drawing as a final process, rather than a foundational one. A collection of 16 drawings by Christopher Batten take, as their subject, a Japanese Chin named Kobi. In an era where the internet threatens to collapse beneath the ponderous bulk of adorable pet pictures, there is something endearing about the process of capturing a (presumably) beloved pet in this more analogue form. Batten’s work is face-to-face with a colorful wall of visual and performance artist http://baileyscieszka.com/—a kind of insane clown posse unto herself—who also has a few pastels on display in a show of local talent at What Pipeline, Ever get the feeling we’re not alone in this world? 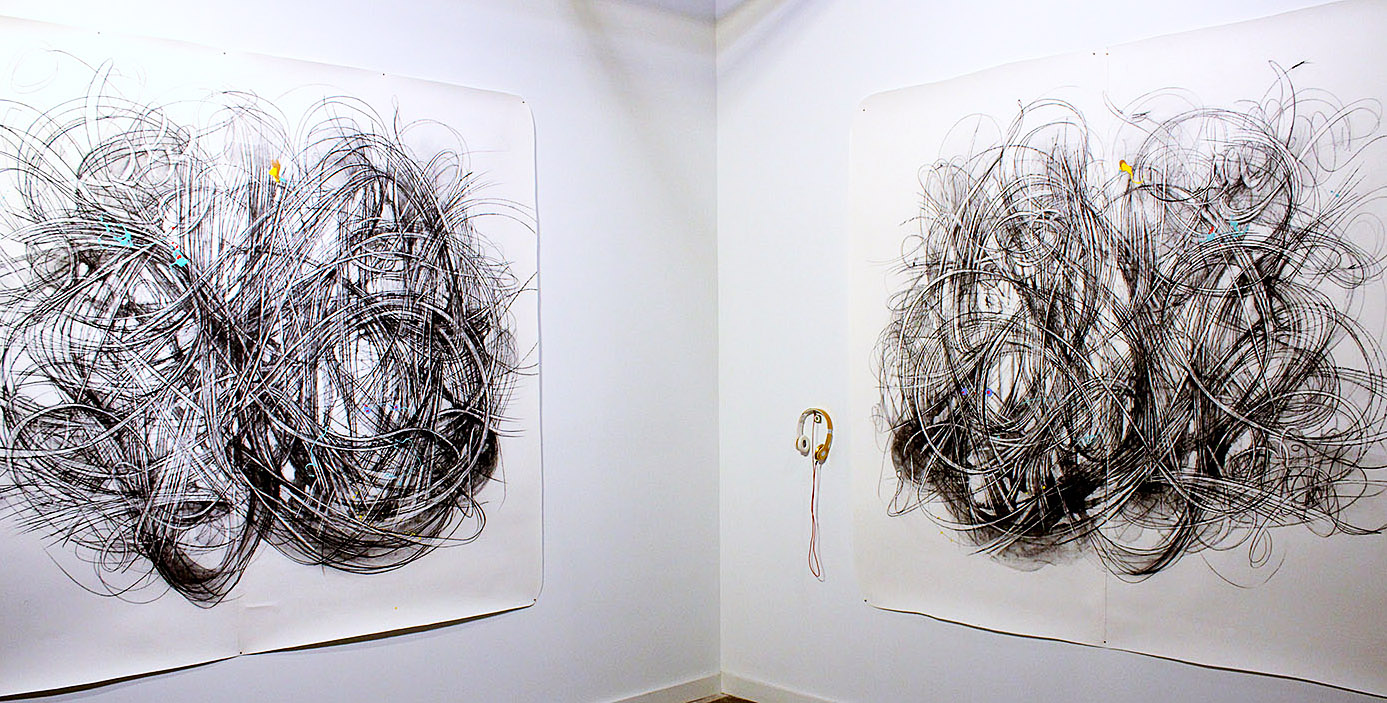 Truly, there is no lack of innovative approaches and gratifying results, an outcome that Sawyer consciously cultivated with the group of 15 artists on display. “I don’t know if I would characterize this collection of artists, especially in any monolithic terms,” he said. “That’s kind of the opposite of what I was going for. Diverse is the first thing that comes to mind. Some of the artists are documenting life as they see it, some are trying to negotiate traumatic experiences, and others humorously reflect on some of the worst aspects of our current society. I asked each artist to contribute more than one piece, so that viewers can see that the work presented in the House of Art show is not a lark, but rather a small glimpse into the creative practice of each individual.”

Collection of works by DeMags, Circles of Routine – Installation/detail view

The appreciation that Sawyer, and House of Art curators Matt Eaton and Robert-David Jones have for the arts, artists, and viewers is evident in the open process that permeates both the HOA residencies and the construction of 15 Steps. It’s a brilliant showcase of a wildly diverse range of talent and approaches, one that’s definitely worth taking a few steps out of your way to go experience!

15 Steps: Perspectives in Drawing will be on display Saturdays from 10-3 (or by appointment) at the Red Bull House of Art through July 9. For an appointment, you can make contact at redbullhouseofart@us.redbull.com.