With it’s commercial focus, David Klein Gallery present work that, at times, places a higher value on aesthetics than challenging the dominant paradigm—but a trio of solo exhibits, which opened on Saturday, September 17, 2016 collectively present a playful push and pull around the subject of gender roles and interpersonal relationships. 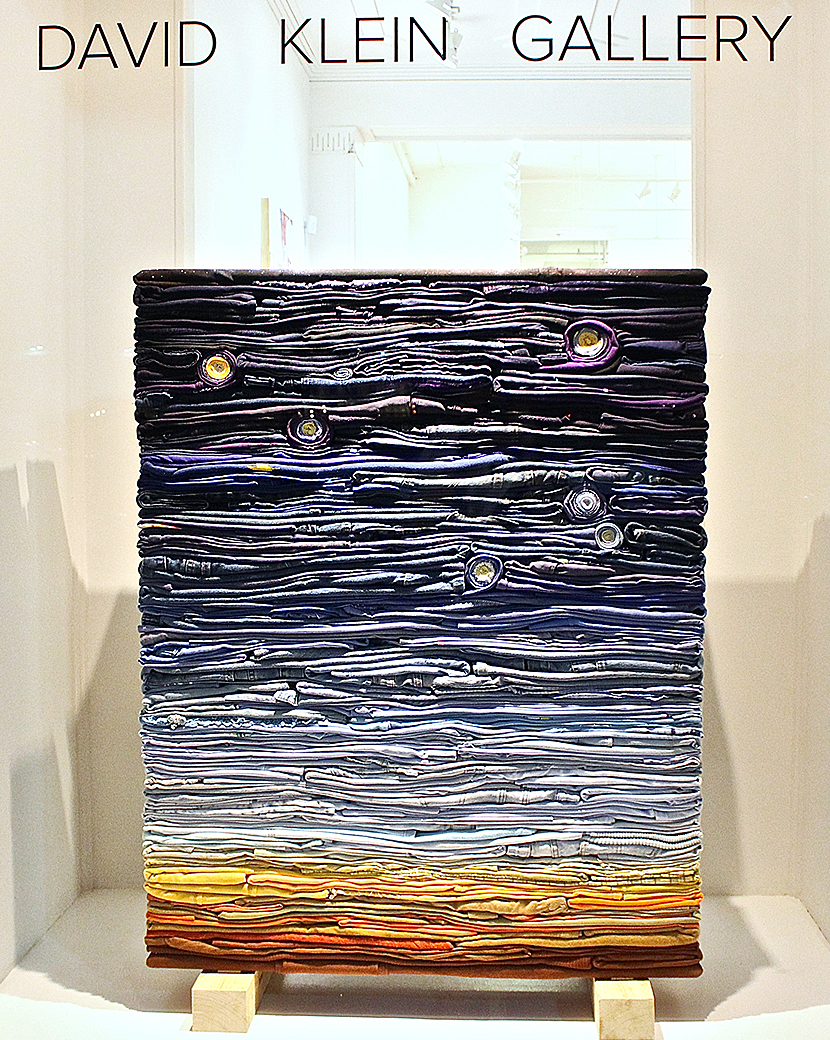 Welcoming viewers is a front window display by Derick Melander, working in the typically female-dominated realm of folded laundry. Melander’s meticulous towers and tableaus, rendered in compressed and expertly folded garments, are not only visually pleasing, but carry an intense allure for anyone with OCD aesthetics. Night Sky (2016), on the lefthand side of the gallery’s entryway, goes so far as to depict a Van Gogh-like scene, with the fold lines, punctuated by tight rolls of concentric garments, echoing the swirling brushstrokes of one of the late painter’s most popular works, The Starry Night (1889). Other works present more abstract chroma-towers, that create ombre fades through hundreds of stacked garments, resembling soft core samples or geologic strata. 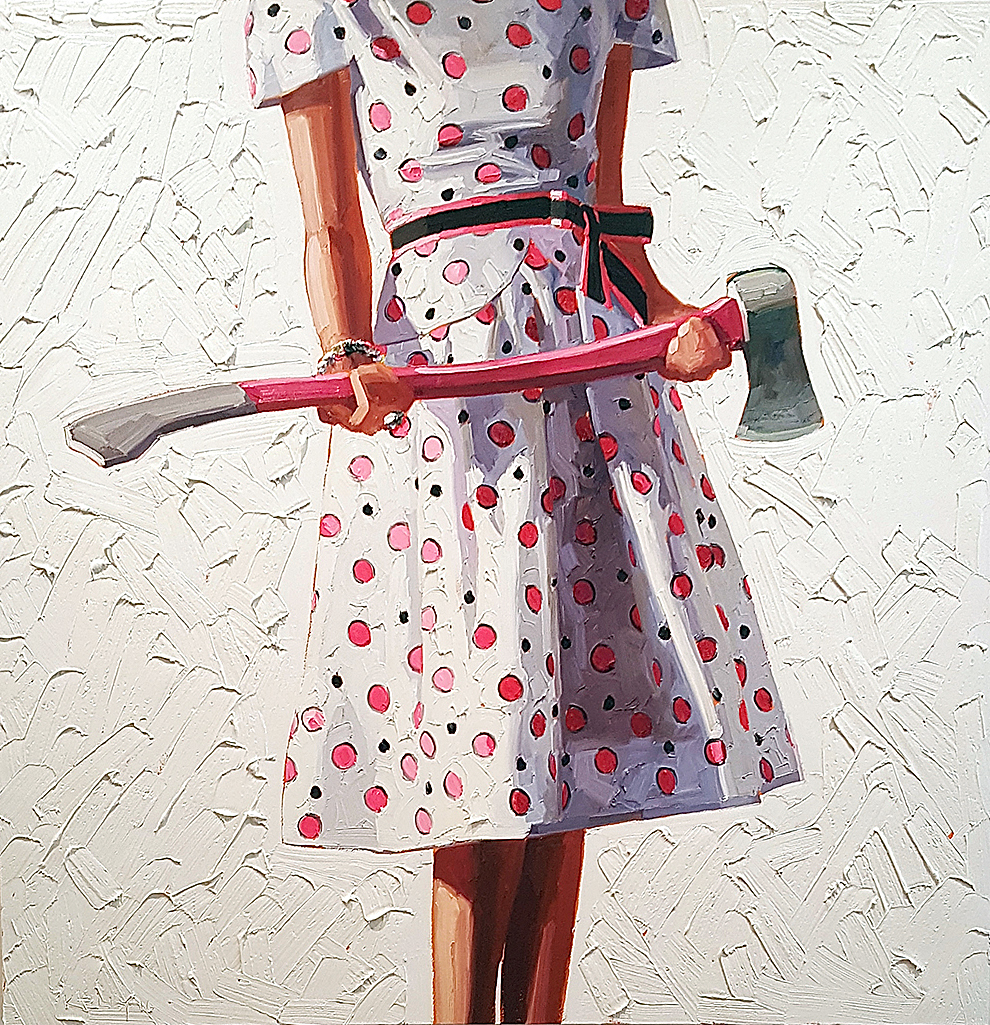 With the gentleman handling the laundry, the gallery’s main room makes way for the ladies of Kelly Reemtsen’s “Over It.” The series is thematically tight, featuring three to five foot oil paintings of women in party dresses, standing on ladders or chairs, and wielding tools. Her subjects are largely generic, depicted from the shoulders, waist, or knees down, wearing lavish skirts and dresses and high heels that evoke a sense of 1950s housewife pageantry. They clutch their tools—sledgehammers, axes, shears, and chainsaws—with calm determination, or trail them coquettishly behind their backs. Already balanced in their frivolous footwear, they seem stable atop footstools and chairs, even kicking back one flirtatious foot off an A-frame ladder in Social Climber (2016). These are not women dressed for the occasion of home demolition or tree removal, and therefore the implication is a little more sinister—as the title would suggest, Reemtsen’s subjects are fed up, and preparing to take some kind of action. This clash of girly accessorizing and a hint of violence is echoed in Reemtsen’s Fuck the System sculptures (Siren Red, Frosted Pink, and Hot Pink, respectively), which feature Oldenburg-scale tubes of lipstick in stainless steel with a dazzling chrome effect, their contents stubbed out onto their pedestals like discarded cigarettes. 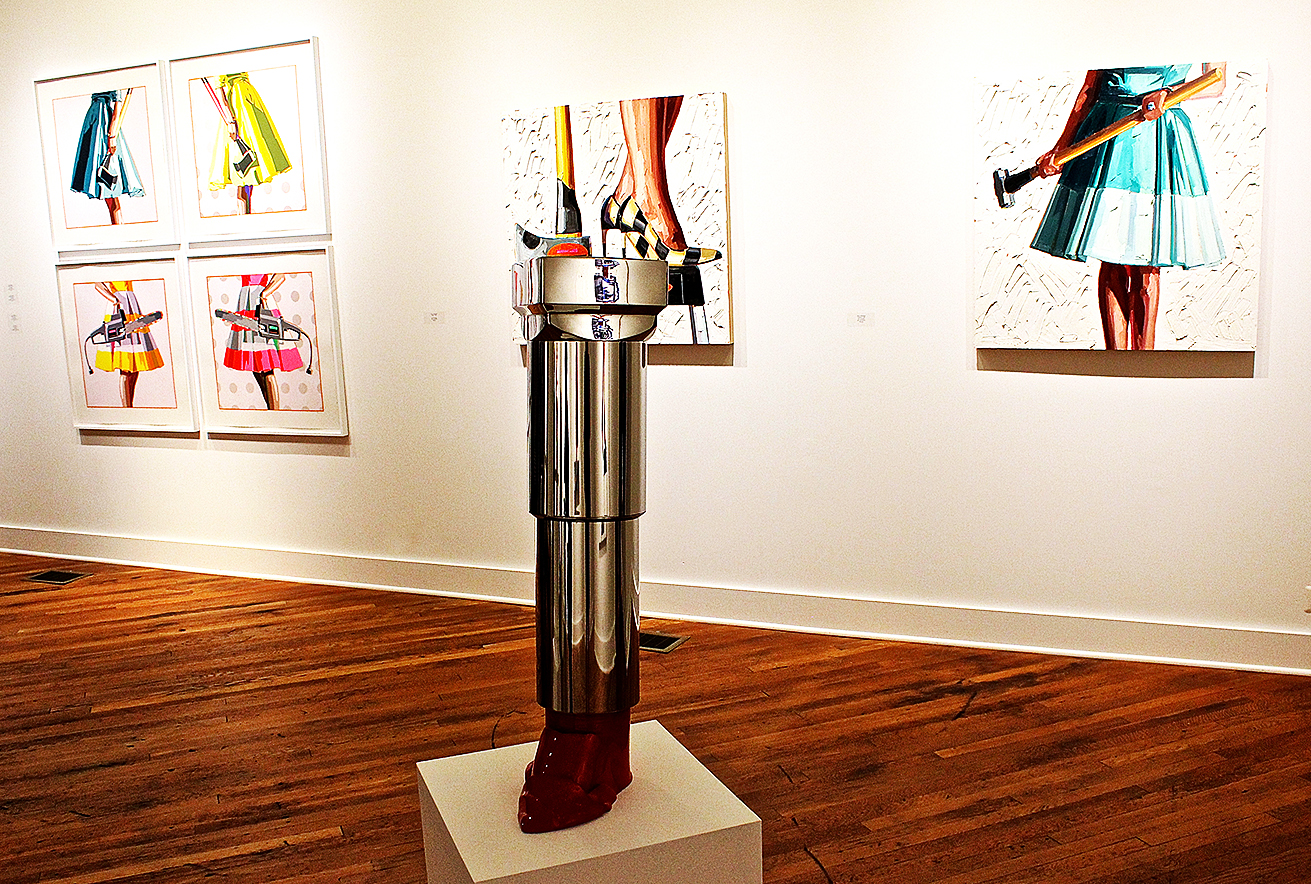 Even the finish of Reemtsen’s paintings warp the edges of gendered labor; the artist manages to administer a thick veneer of stucco to the background of the paintings that would impress the most seasoned contractor. When one considers the language of labor, it is striking to realize that there are gender-coded words for what amounts to the same action—ask a man what “detailing” a car actually means, and he will be forced to admit that it is “cleaning.” The control and appeal that Reemtsen achieves in her identity-neutral portraits mirrors the restraint and artifice that is the daily work of presenting a polished, female-coded facade to the world, and it is heartening to see that women are generally expressing the sentiment that they have had enough of it. 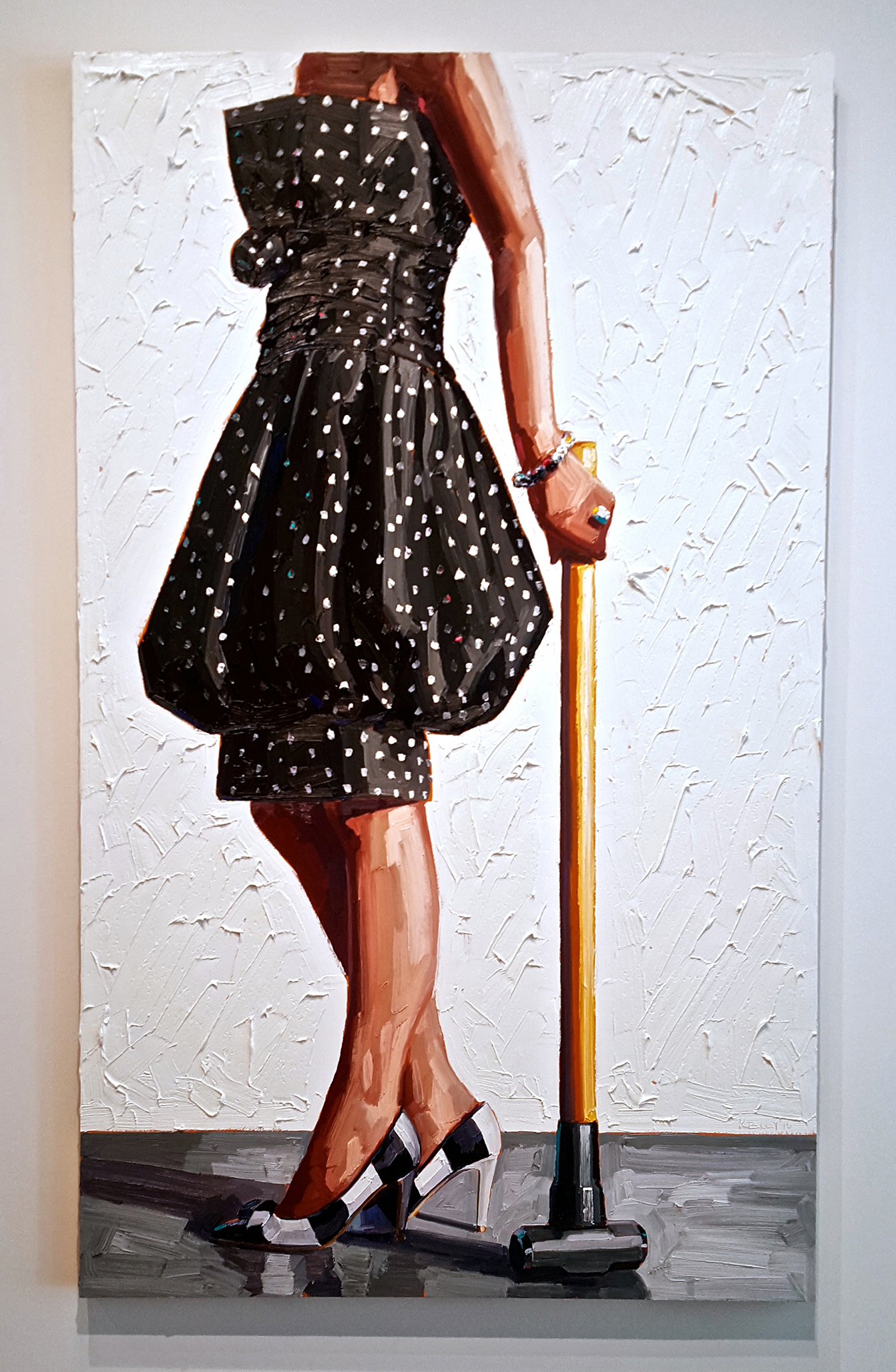 All this gender-bending veers into the abstract world of feelings as we progress to the heart of the gallery, where Emmy Bright’s “Why Don’t You Want This?” rounds out the show. Bright presents a collection of silkscreen prints on paper and newsprint, that playfully juxtapose words, sketched out images, and fields of color. These works successfully leverage simple wordplay and open-ended diagrams to create a surprising depth of meaning; Bright is acutely sensitive to the workings of the heart, and manages to spin out a collection that reflects a kind of emotional complexity belied by their visual simplicity. 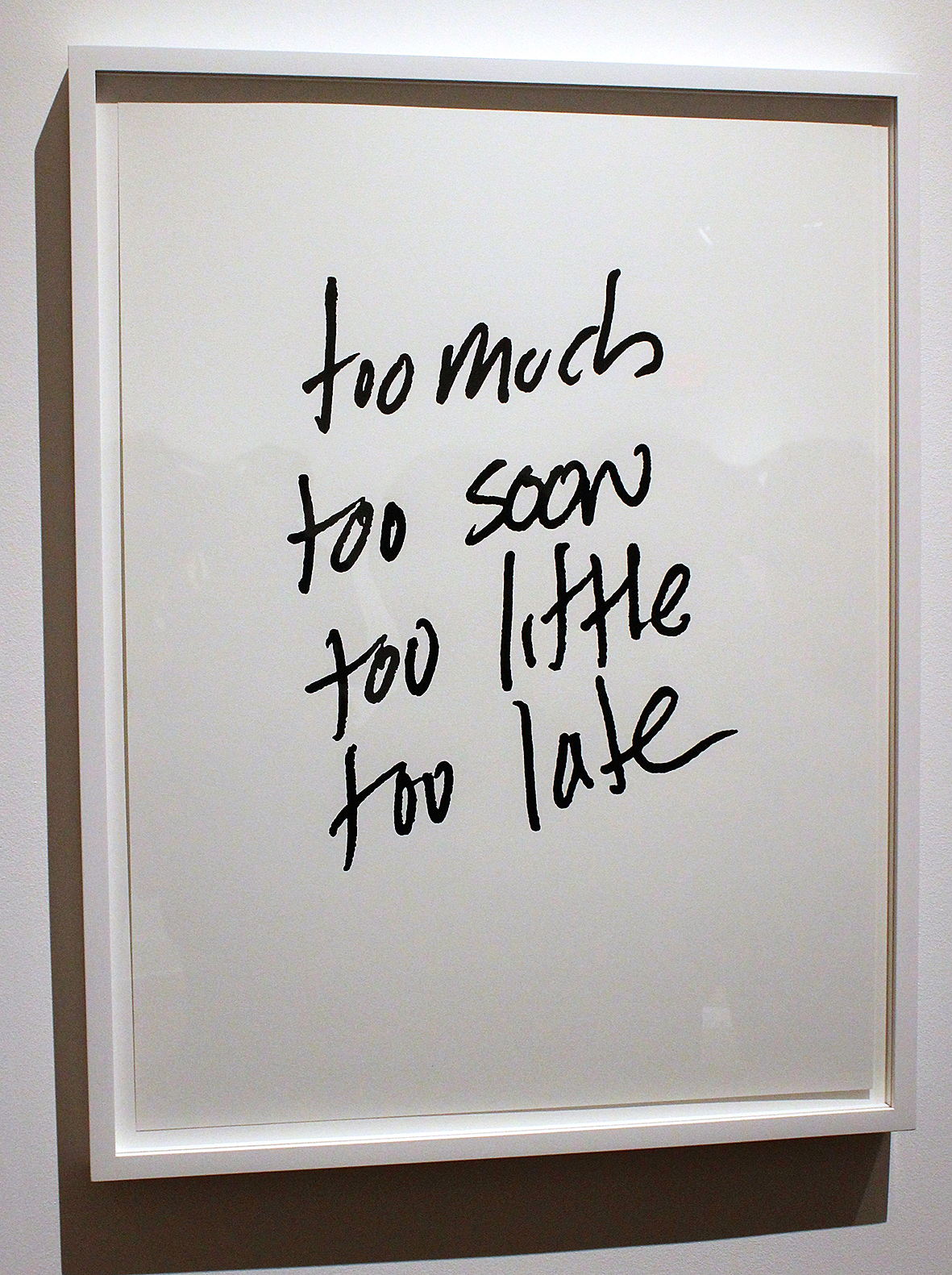 Having created this visual lexicon of emotional placeholders, Bright goes a few steps further with the creation of More Stupids: A Tarot. This small edition tarot deck, featuring Bright’s prints as 44 oversized tarot cards with an accompanying book of interpretations, aims to shuffle and deal these fundamental feelings into readable form. Never one to leave her viewer hanging, Bright spent a week following the opening performing scheduled art card tarot readings, where visitors were treated to an emotional forecasting by Bright, or her alter-ego, Dr. Ladybear. The tarot deck collects highlights from Brights “Three Stupids Practice,” a daily process wherein she goes to the studio and makes “three things that are stupid and wrong in some significant way.” As her gallery guide states: “If they are good, they are also right in another significant way.” 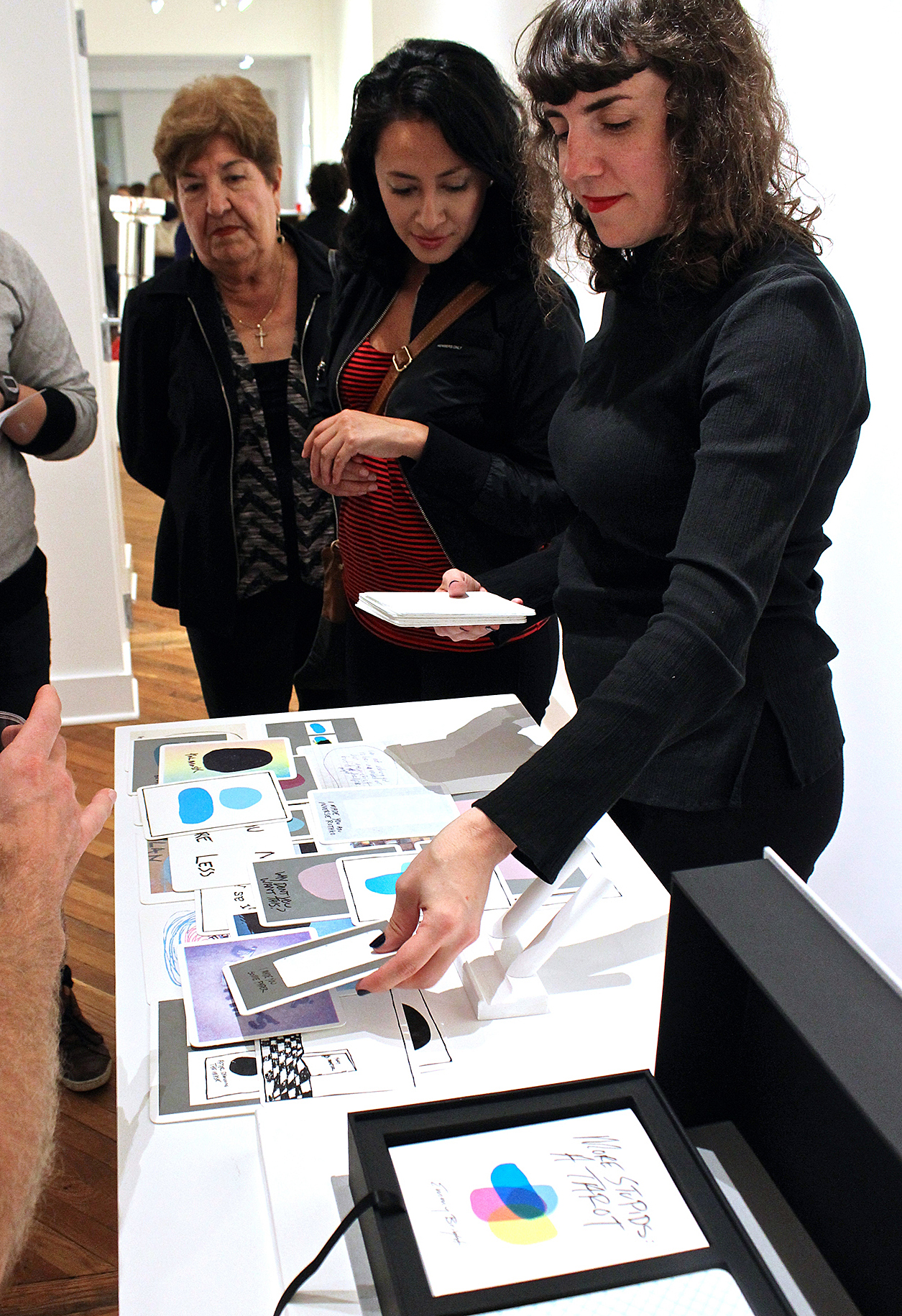 An assistant lays out selections from More Stupids: A Tarot during opening night

In fact, Emmy Bright has it very right, and her sometimes-poignant, sometimes-funny, and exceedingly gentle explorations of emotion provided a beautiful counterpoint to the spirit-draining world outside the gallery walls. If these three artists can take joy in the mundane, draw the line at oppressive categorization, and open their hearts to the possibility of connection, perhaps they can inspire us all to do the same.