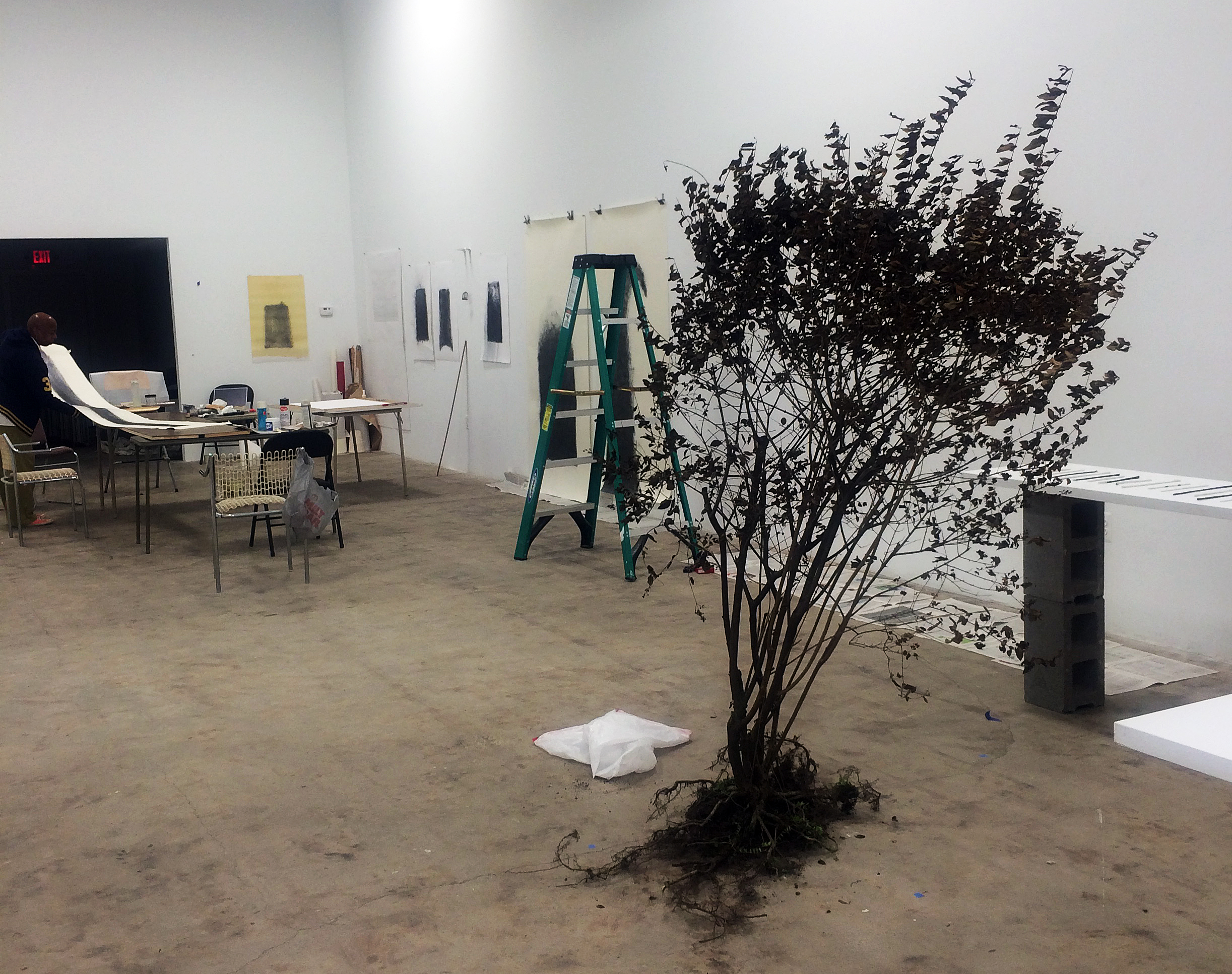 ElizabethYoungblood defines herself first as a craftsman. A quote that describes her trajectory well is a simple one- “I respect making.” The broad range of media she employs- textiles, drawing, basket-weaving, ceramics, wire sculpture- attest to her democratic fealty to a very personal, singular hunt. With Righted- A Trajectory of Work by Elizabeth Youngblood, Youngblood has transformed 9338 Campau’s sprawling Hamtramck gallery space into a hive of activity, presenting her work in an unprecedented format- a retrospective that includes works in progress that Youngblood is developing within the gallery itself. She is taking advantage of the vast amount of space there to both gather her work into one place large enough to give it breathing room, and realize large works on paper that she has long desired to explore but hasn’t had the space, until now, to properly develop. Youngblood’s residency at 9338 Campau feels revolutionary, both for an artist in full command of her powers with a distinguished career in the bag already, and for an explorer who makes the most of every space she is given for her work to take center stage.

Asked to qualify her vast body of work into a single context, she explains how one branch of her exploration leads, maintaining conceptual consistency, from one medium to the next. Youngblood’s devotion to mastering the strengths of every material that passes through her hands, and the joy she takes in immersing herself in the process of finessing each one, gently, into her lexicon, is doubly striking in the context of Righted, where one can view long-culminated works alongside raw, vulnerable works in progress. The very presence of the works in progress casts Youngblood’s retrospective work in an unusual light- as open-ended, questioning works in progress themselves. This impression suits Youngblood’s whole-hearted focus on process as a studio practice- allowing the current of her concept to carry her from medium to medium, presenting each work as a direct flowering from the clues unlocked, and the questions raised, in the last. 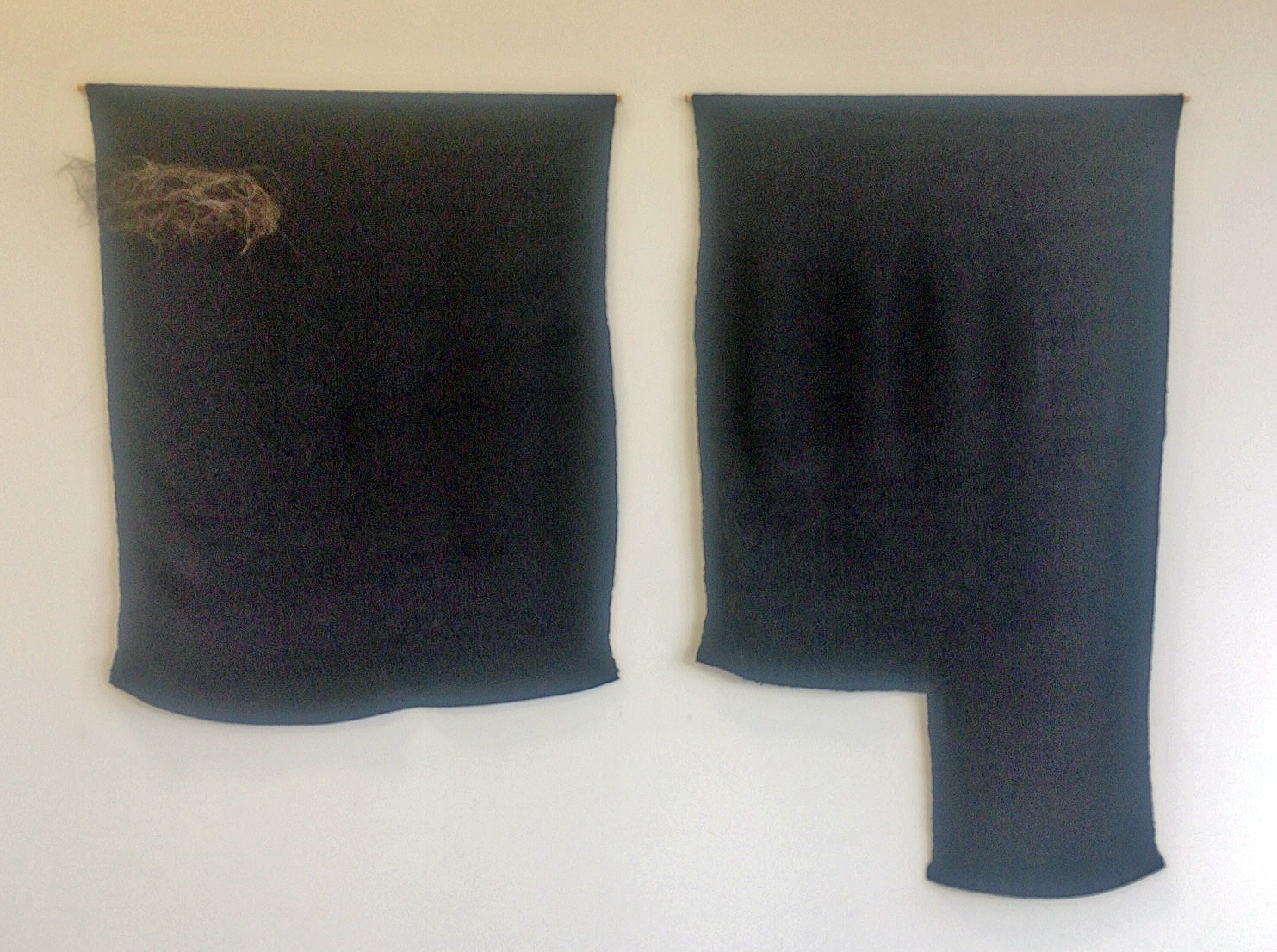 Talking with Youngblood about her work reveals the ultimate unimportance of form in her studio practice. This came as a surprise in light of the striking formal continuity I made out in her work- indeed, it was the first thing that enabled me to pass cohesively from one piece to the next, given what different media she ropes in. This formal consistency, it turns out, is Youngblood’s soul pattern, a template on which she explores such concepts as the dogged devotion of craftsmanship, the solitary joy of wreathing visions out of tactility, and the construction of planes out of lines. 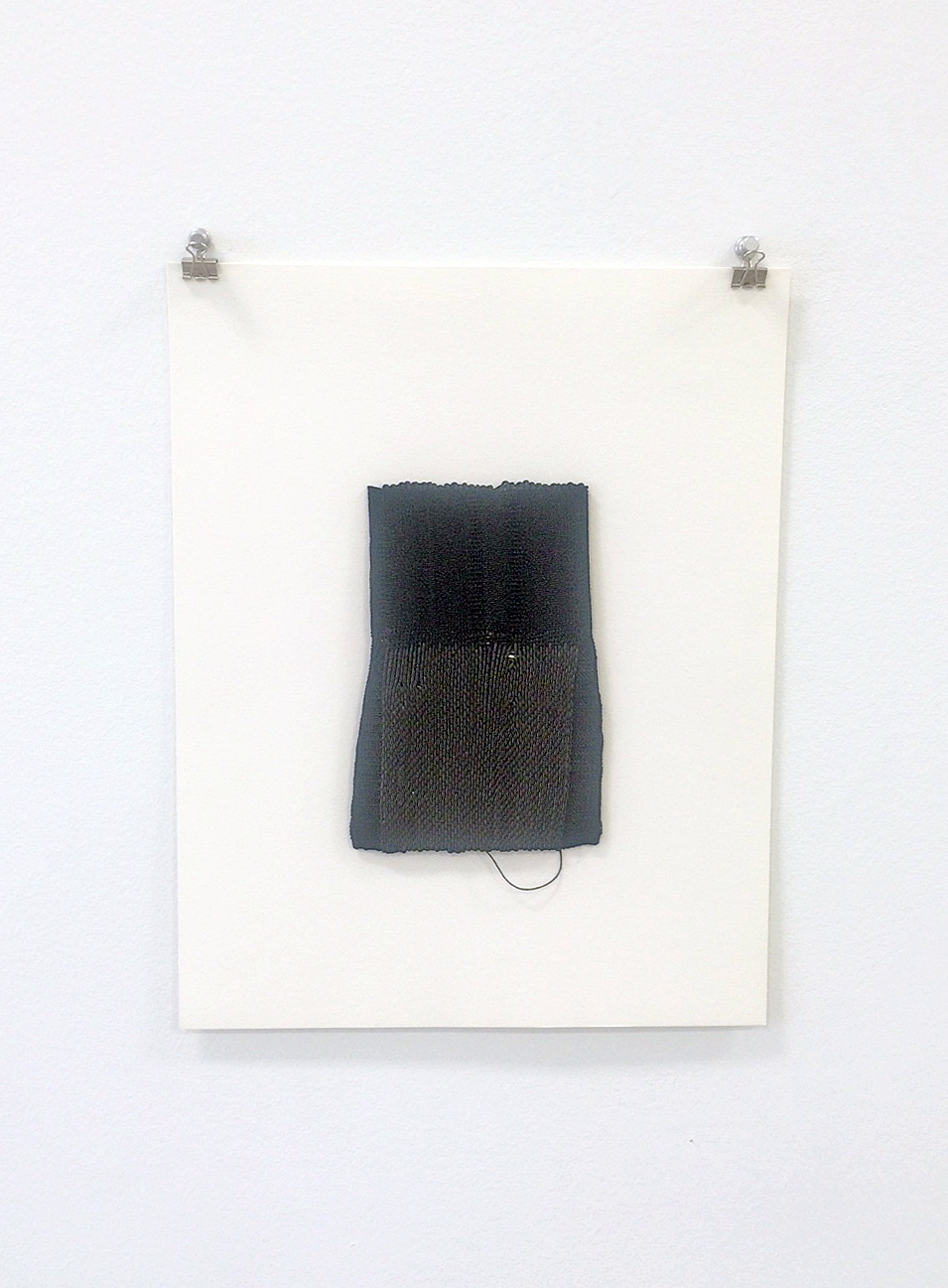 Youngblood’s artistic chronology mirrors her bodies of work. Trained as a graphic designer, she has worked in that profession, on and off, since her tenure as an undergraduate student at the University of Michigan. She is quick to point out, rightly, the subtle craft demanded by graphic design. Between her design work, her teaching career, her years spent in New York, and interludes in craft-oriented industries such as bar-tending, she has snatched pockets of time to hone her planar exploration in various media at artist residencies such as Haystack and Penland School of Crafts. Her travels have pulled a variety of media into her exploration- her vision remains remarkably consistent as she applies it to different traditions of making. She emphasizes the importance of material and craft as a conduit toward greater understanding of place, such as North Carolina and its history as a hub of furniture craft (the baskets on display in Righted were created at Penland, inspired by the materials and methods of furniture-making.) 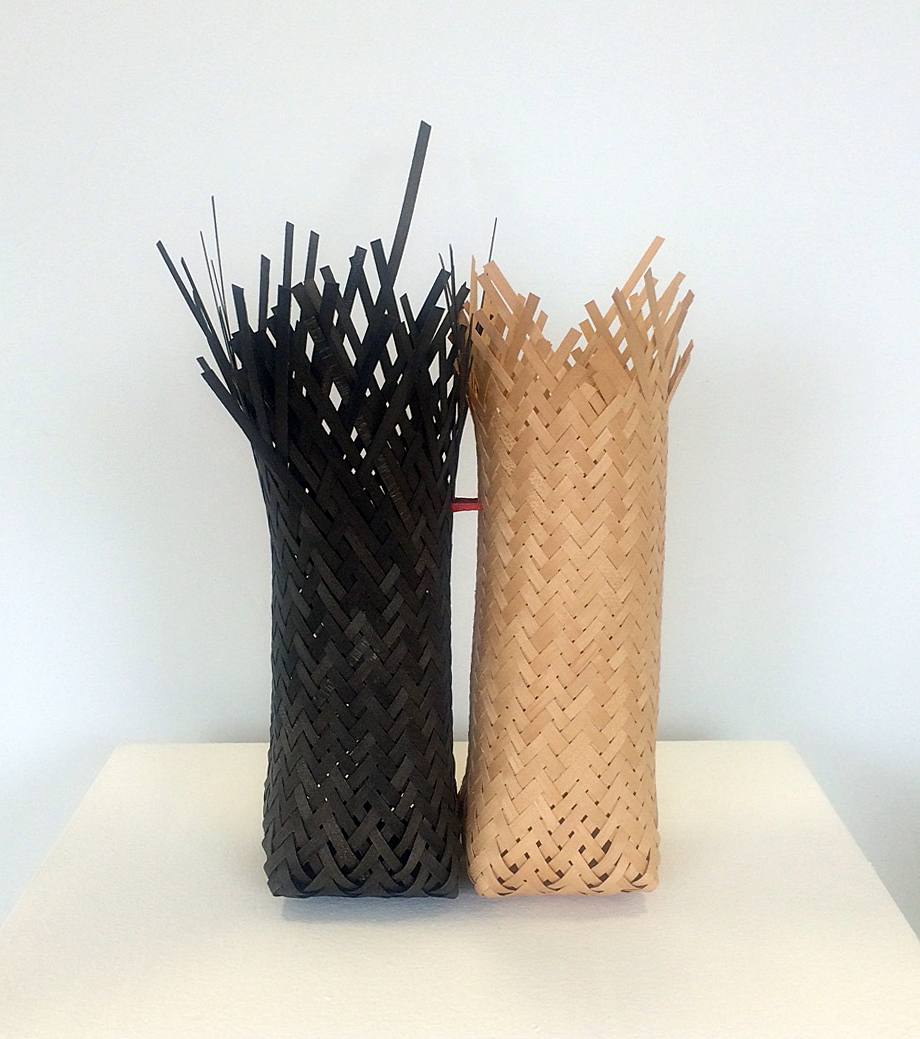 This breath of Place, in turn, enriches Youngblood’s exploration of process as a path toward distillation of an artifact of conceptual, rather than utilitarian or formal value. Youngblood speaks with quiet admiration of the traditions of crafting she has been privileged to explore, and how they have added their own regional, historical voices to her practice.

As she continues to explore, chasing her vision of planes built of carful, joyous repetition, Youngblood pulls traditional craft forms, seemingly effortlessly, into a body of work that maintains an astonishing formal trajectory, presenting razor-sharp meditations on process in various media encased, almost like home-jarred preserves, within an all-encompassing, monolithic form. The form, seductive and enigmatic as it is, is no more than a ground for her process. Asked her opinions on the tension between fine art and craft, high and low art, she expresses less interest in that argument than in the status of media as “women’s work” versus “men’s work.” The large-scaled drawings Youngblood is developing during her tenure at 9338 Campau are an exploration into a quicker, more decisive way of making that has historically been associated with the bodies and thought processes of men. 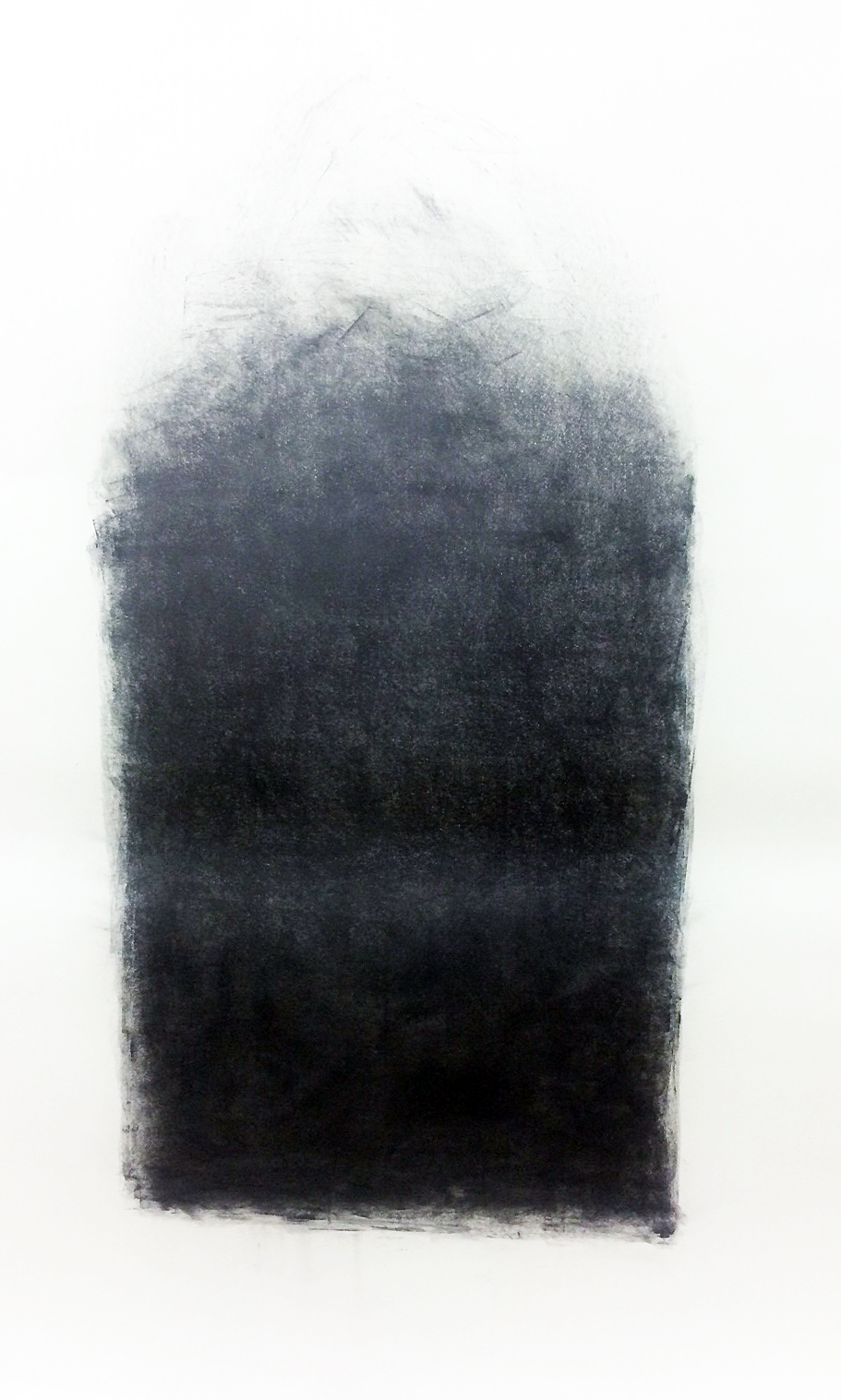 “Men’s work” as Youngblood describes it, seems less a political appropriation on her part than a desire to master yet another craft- one she, for the moment, has the physical space to pursue. Spending time with Youngblood in her studio is a lesson in veneration for processes that unite, rather than polarize, the complex history of making as it indexes various times, places, social demographics, races, and genders. To sum up, Youngblood respects making, and, though she is acutely aware of the cultural associations that come with each material she ropes into her vision, her devotion to process and skill-building manage, miraculously, to shed the oppressive political discourse that has hung around craft for decades and present it, unilaterally, as a vast conduit for exploration of an artist’s conceptual vision. Youngblood’s is a true Twenty First Century studio practice- and she’s earned it.

Righted- A Trajectory of Work by Elizabeth Youngblood has percolated at 9338 Campau Gallery in Hamtramck, MI throughout the last breaths of summer. A public reception of her work will be held on Saturday, 9/24/2016 from 7-10 pm.