From Lens to Eye to Hand: Photorealism 1969 to Today 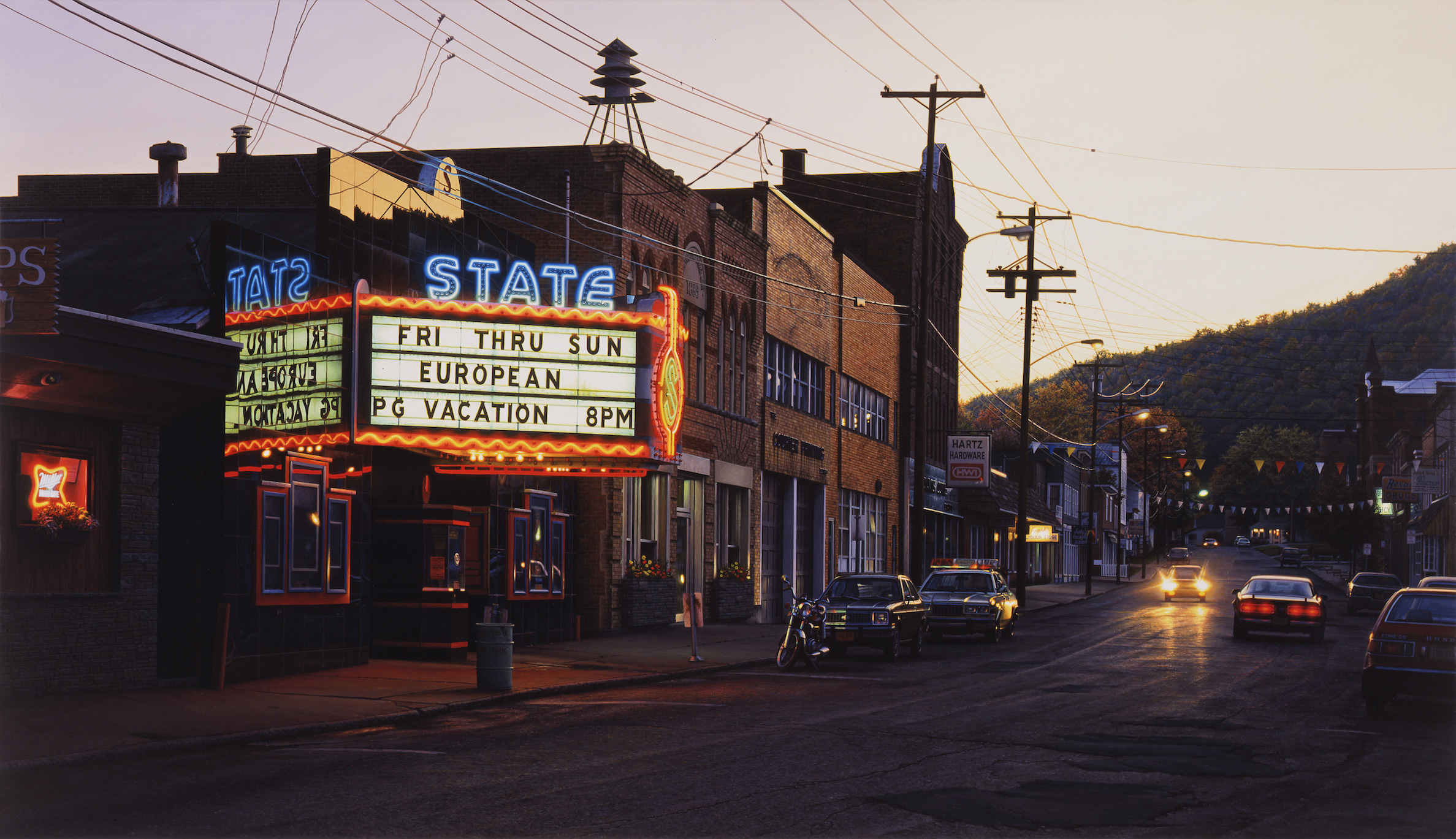 According to the ancient historian Pliny the Elder, two rival artists, Zeuxis and Parrhasius, once had a public competition to determine which of the two was the better painter.  When Zeuxis unveiled his painting of a bowl of grapes, the story goes that they were so realistic that birds approached the painting and pecked at it.  Convinced he had won, Zeuxis turned to his rival and asked him to unveil his painting.  But Zeuxis had been deceived; Parrhasius had merely painted a very realistic image of a veil, which had fooled not just Zeuxis, but everyone present, and he was thus declared the winner.  The tradition of hyper-realistic painting never died, and even in the 20thcentury when abstract expressionism took the world by storm, some artists chose instead to rebel against the rebels by creating paintings that rivaled photography in their realism.  Through August 12, a fine survey of the first and second generation of photorealist painters is on view at the Flint Institute of Arts, emphatically making the point that the realist tradition is alive and well. 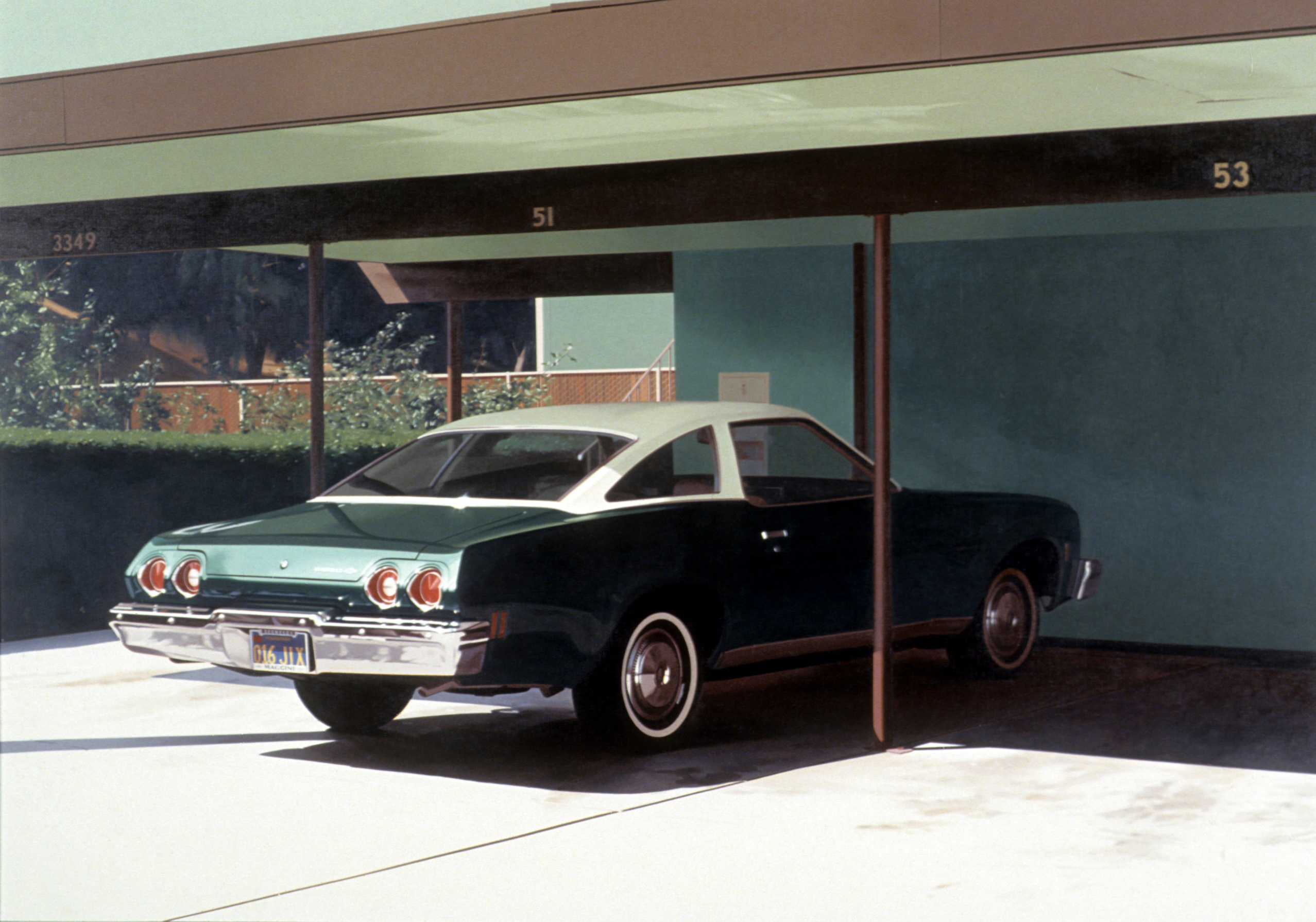 The show snugly fills the spacious Hedge and Henry galleries at the FIA, and traces the history of photorealism from 1969 through the present.  The movement began in densely populated areas in America’s east and west coasts, and the subject matter frequently featured the stuff of urban life.  Early photorealist artists like John Salt and Robert Bechtle produced candid images of automobiles, going out of their way to not beautify the mechanized, industrial world of postwar America. John Salt’s Albuquerque Wreckyarddepicts a junkyard populated with abandoned cars.  Although the scene is unidealized, Salt flaunts his deft ability to connivingly translate reflective chrome surfaces into paint, and the effect is visually striking.  The painting also works as understated social commentary on consumption and waste.  Tom Blackwell’s arrestingly large paintings take a different approach, focusing instead on the aesthetics of the wiring and mechanical components beneath the hood.  His Indian’s Chopper Modified ’57 Harley offers us a close-up of the inner workings of a motorcycle.  Divorced from any frame of reference or context, the highly reflective chrome and the intricacies of the engine components almost become a work of abstract art. 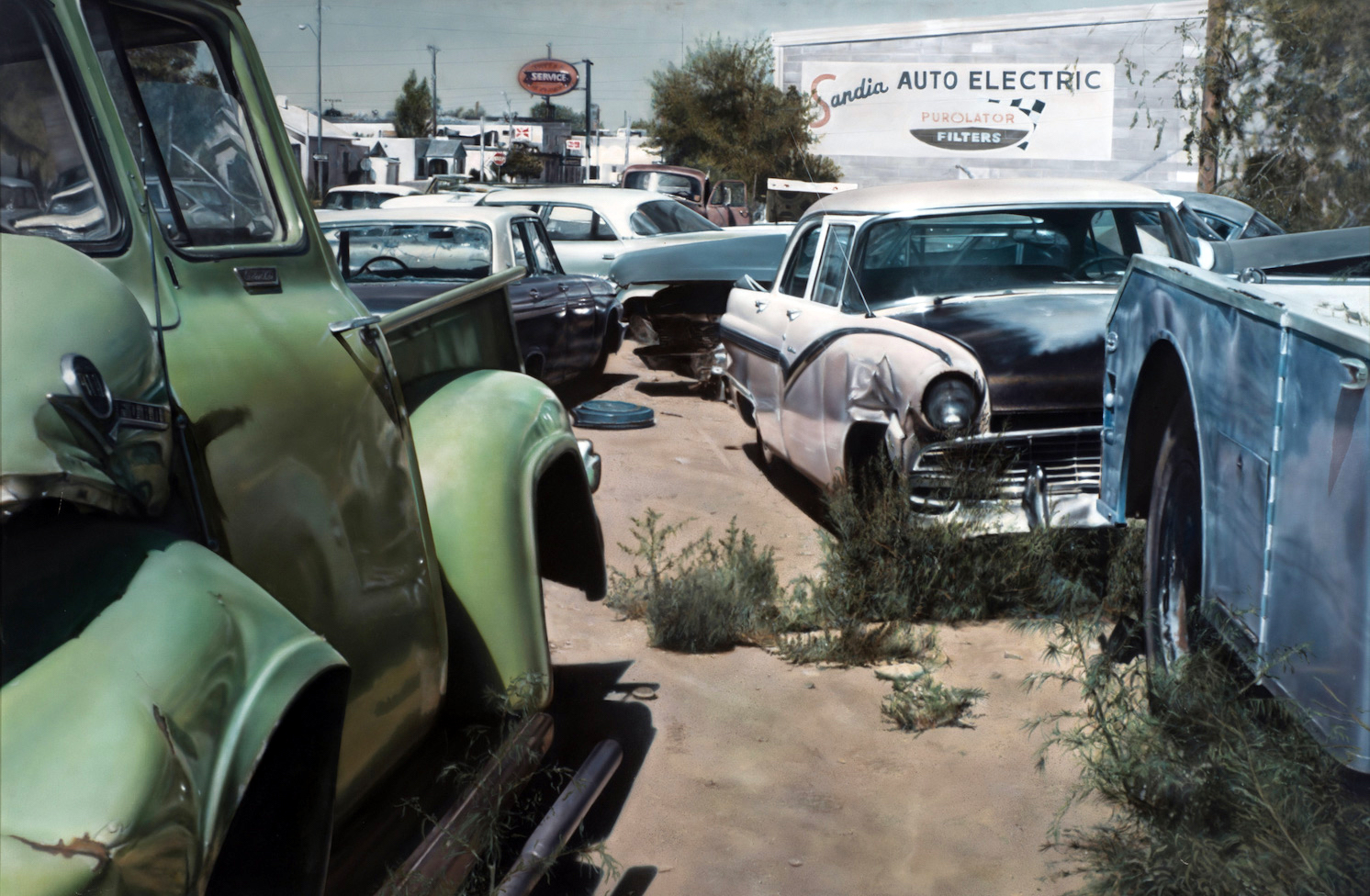 This exhibition makes clear that there are different approaches to photorealism.  Some artists wanted their paintings to quite literally translate photographs into paint, replete with points of sharp focus in the foreground and blurring and distortion in the background.  Audrey Flack’s iconic 20thcentury vanitas Wheel of Fortune, is a good example.  And at almost ten feet square, this monumental painting is arguably the star of the show.  Other artists believed that painting could actually improve on photography.  Richard Estes’s cityscapes portray the world in extreme lucidity—both foreground and background retain crisp focus.  Strictly speaking, Estes is a photorealist, but his paintings certainly don’t look like photos. 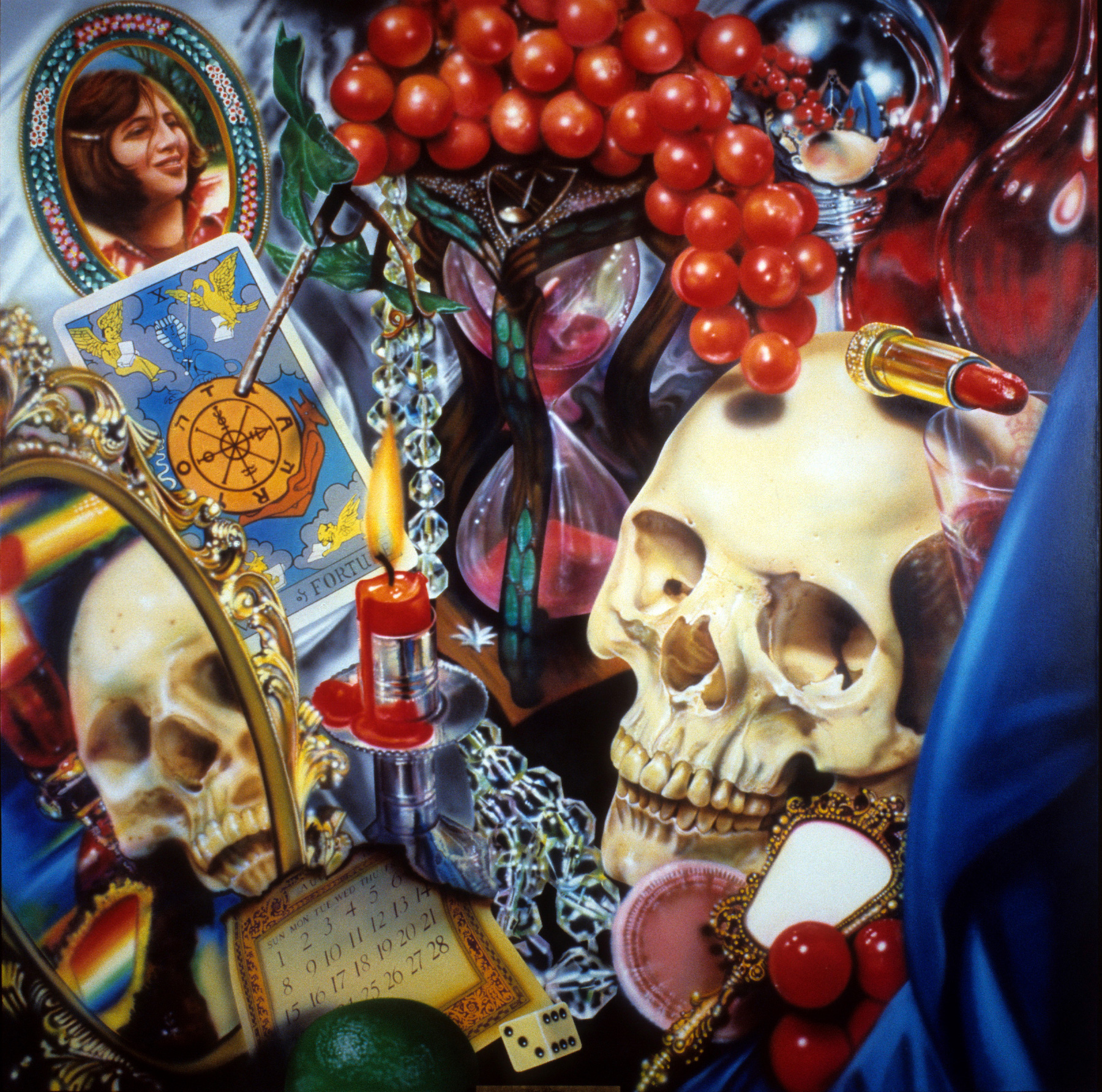 The show divides the exhibition into two sections, representing the first and second generations of photorealists.  Unlike the pioneers of the style, the artists of the second generation have more technology at their disposal, such as the use of computer software to assist in the transfer of a photo onto canvass.  The works of contemporary photorealists are every bit as satisfying as those of the pioneers of the movement.  Yigal Ozeri blows up small photographs into huge paintings, and his ability to convincingly translate the sparkly dance of sunlight striking ripples in Mediterranean waters into paint is virtuosic.  Perhaps the most convincing work in the show might ironically be the most passed-over, simply because it looks too deceptively real to even be a painting; in a witty demonstration of trompe l’oielwizardry at its finest, we’re deceived into thinking a cardboard box filled with money is resting under glass on a pedestal. It’s in fact a carefully-painted wooden sculpture. 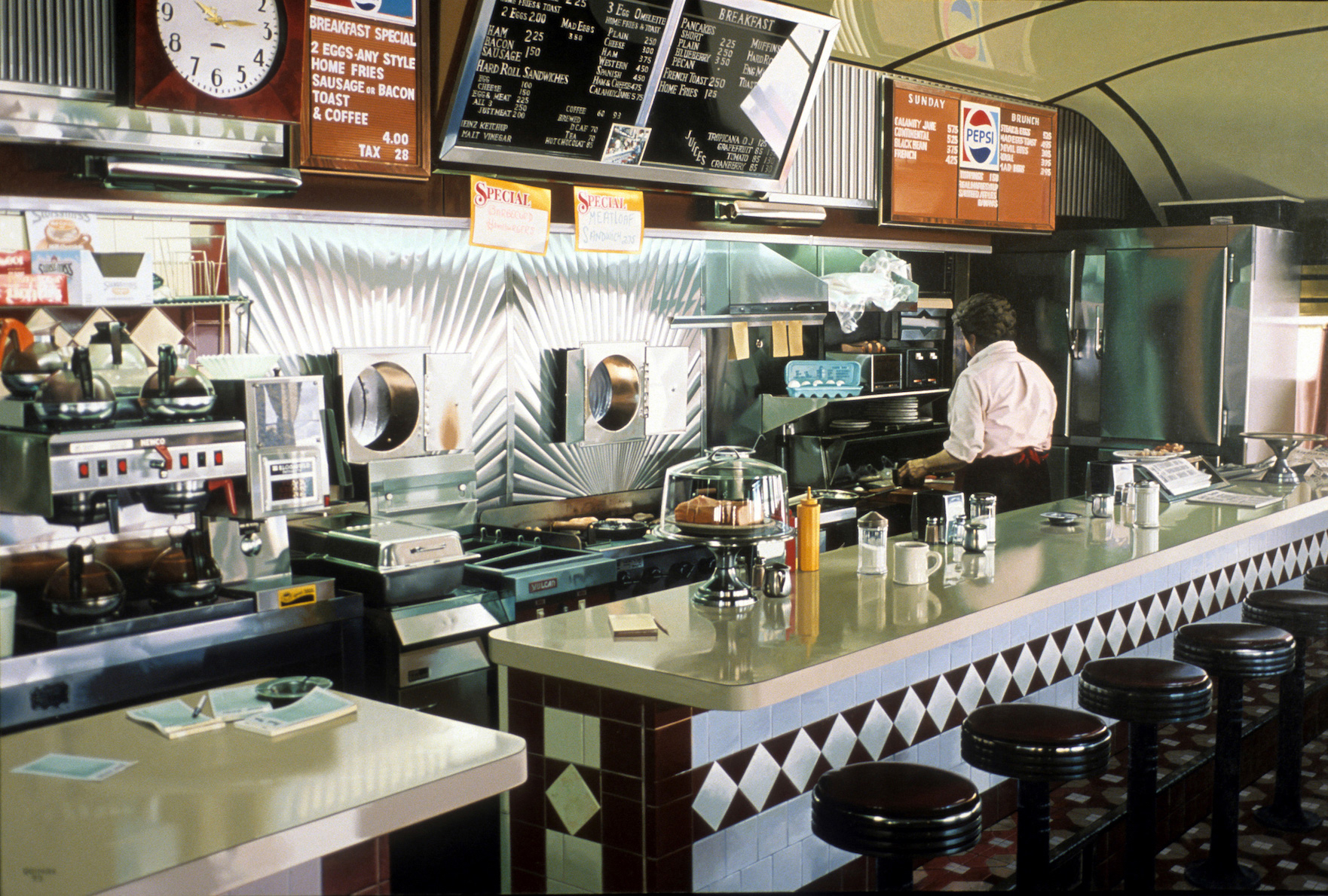 The visual force of these works gets lost in translation when they’re photographed and reproduced in diminutive form in print or online.  Only in person, for example, looking at Richerd Estes’s Plaza, a cityscape crammed with busy details, do we see that the artist rendered the socks of a foreground figure with a few scribbled in, almost impressionistic brushstrokes.  And the playful ripples in Jack Mendenhall’s Pointe Hilton, when seen close, reveal themselves to be horizontal swipes of paint, bristle-strokes clearly visible.  I was reminded of Rembrandt who, in his 1654 portrait of Jan Six,shows the subject standing with gloved hands; but zoom in close on the gloves, and we see a calculatedly scribbled mess that might just as well be a detail from a de Kooning abstraction.  So while the artists on view are unmistakably contemporary, the tradition in which they work extends through the centuries all the way back to the likes of Zeuxis and Parrhasius.  And From Lens to Eye to Hand emphatically makes the point that even in a world oversaturated with photographic images–  almost exclusively in the form of advertisements– traditional painting triumphantly retains its enduring relevance.