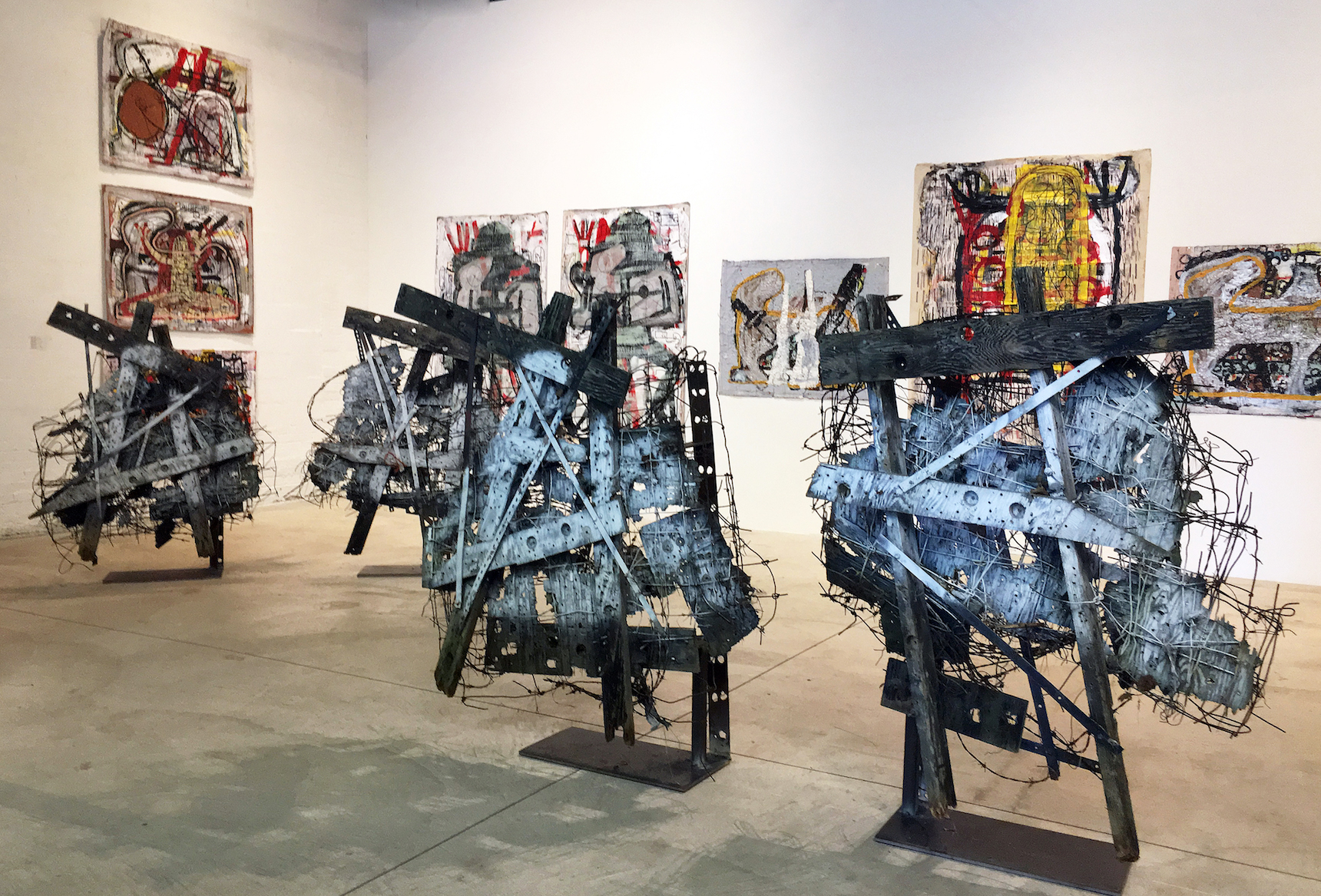 Even veteran observers of the art of Michael Luchs might be knocked back by the opening salvo of the artist’s exhibition just unveiled at the Museum of Contemporary Art Detroit (MOCAD). A line of three- dimensional assemblages of entrapped rabbits (c. 1980), six in all, forms a kind of phalanx to be threaded as one enters the first gallery. This introductory cluster of immobilized rabbits, recently unmoored from their long-term, outdoor habitat in the upstate woods of Lewiston, Michigan, and moved indoors, populated the grounds of the home and studio where the reclusive artist lives and works.

The circular spray of white on each, front and back, adds a spectral quality to their presence and long-term, al fresco durability. Larger than life and rail thin, the assembled effigies, surrounded by a wall mounted menagerie of yet more denizens of woods and ponds–rabbits, plus frogs (all c. 1988 – 2000), not only reinforce impact but testify to the indefatigable practice of Luchs, an artist seemingly devoid of fallow intervals of invention.

At long last, sighed one patron at the debut, a mini-retrospective of Luchs’s decades-long career and gloriously resilient vision. Curated by Elysia Borowy-Reeder, and assisted by Robin K. Williams, “Michael Luchs: Fictitious Character” will be on view for nearly three whole months.

Fresh insights abound in this deployment of two of Luchs’s animal surrogates: furry, silent, horizontally poised rabbits counterpointed by vertically splayed, speckled, croaking frogs. Rabbits, one might conjecture, are easy to like and therefore lend themselves to empathetic audience responses, whereas frogs, who live in watery muck and scum, less so. (Bears and squirrels also romp and gambol in Luchs’s portrayals of forest dwellers, but have gone missing here.) 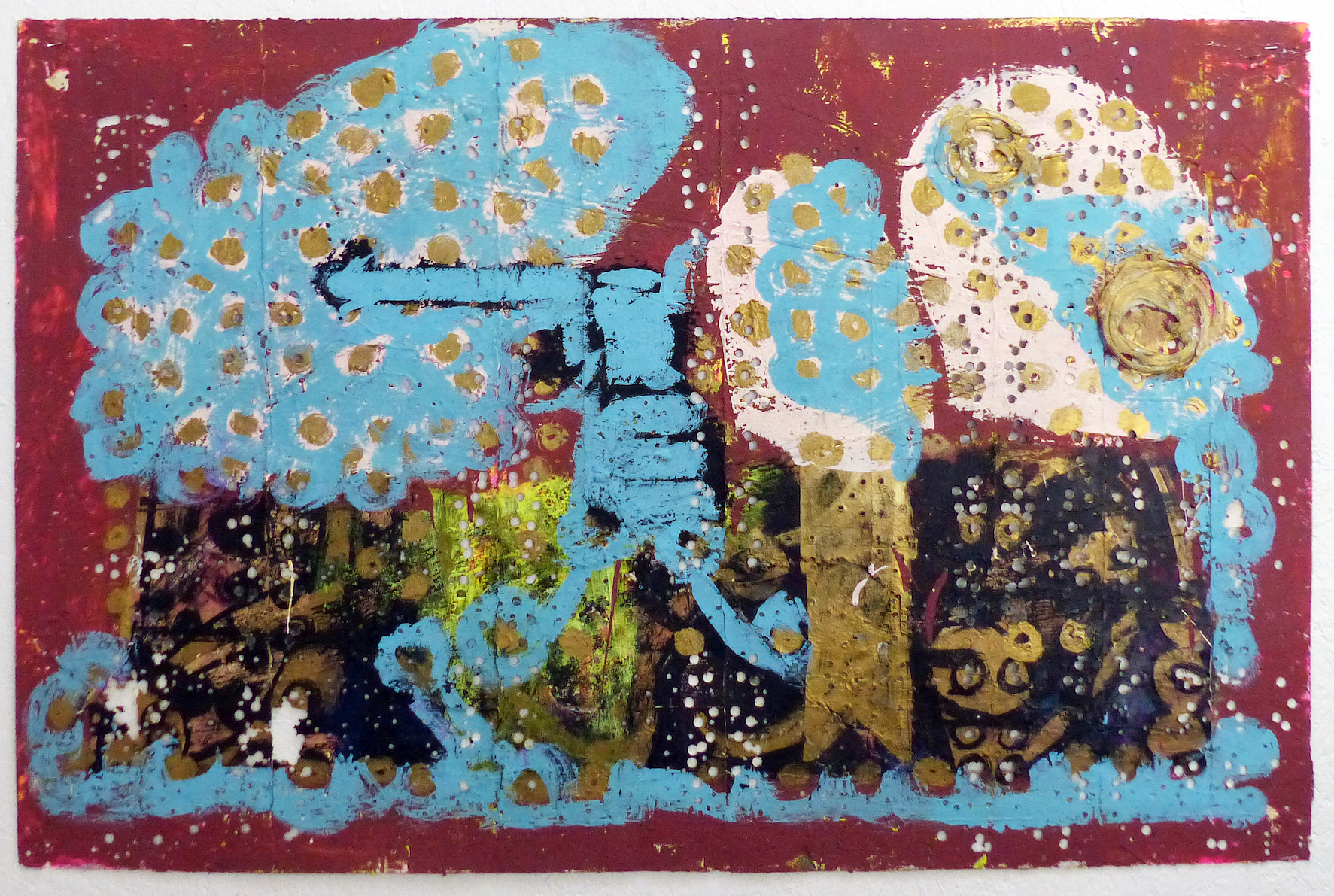 The aforementioned cluster of introductory rabbits seems particularly fraught, each pinioned between crisscrossed planks of weathered wood and concentric circles of barbed wire, well-nigh inescapable barriers for comparatively small, frisky, and wily animals who might usually wriggle free under less restrictive, over-the-top barriers. Alternatively, when free of restraints, and depicted in lush, pastel pinks or blues accented with gold and silver, as in Untitled Rabbit (c. 2000), one of four on view), they recline calmly and passively, yet embedded within each is a pistol implying a weapon of their own demise, or mayhap a defensive weapon tucked behind their deceptively placid demeanors. 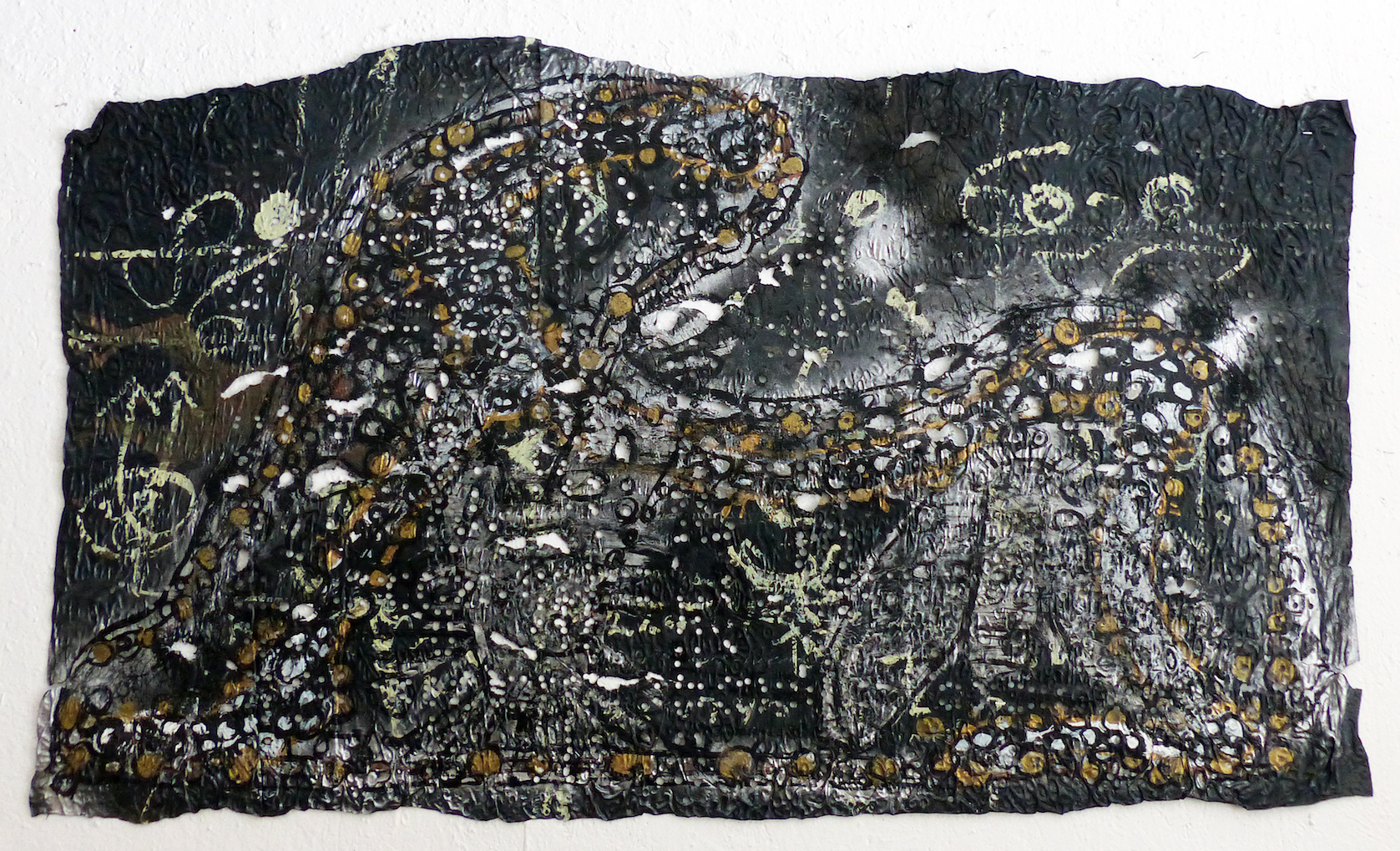 Another rendering, of an Untitled Rabbit (1988) outlined against a night sky, appears, despite its relatively modest scale, beguilingly bejeweled and monumental, its contours firmly etched against an enveloping darkness. Peppered with a plethora of holes the size of a paper punch, it nevertheless evokes stability and self-possession, albeit rendered on a heat-wrinkled length of sheet vinyl. 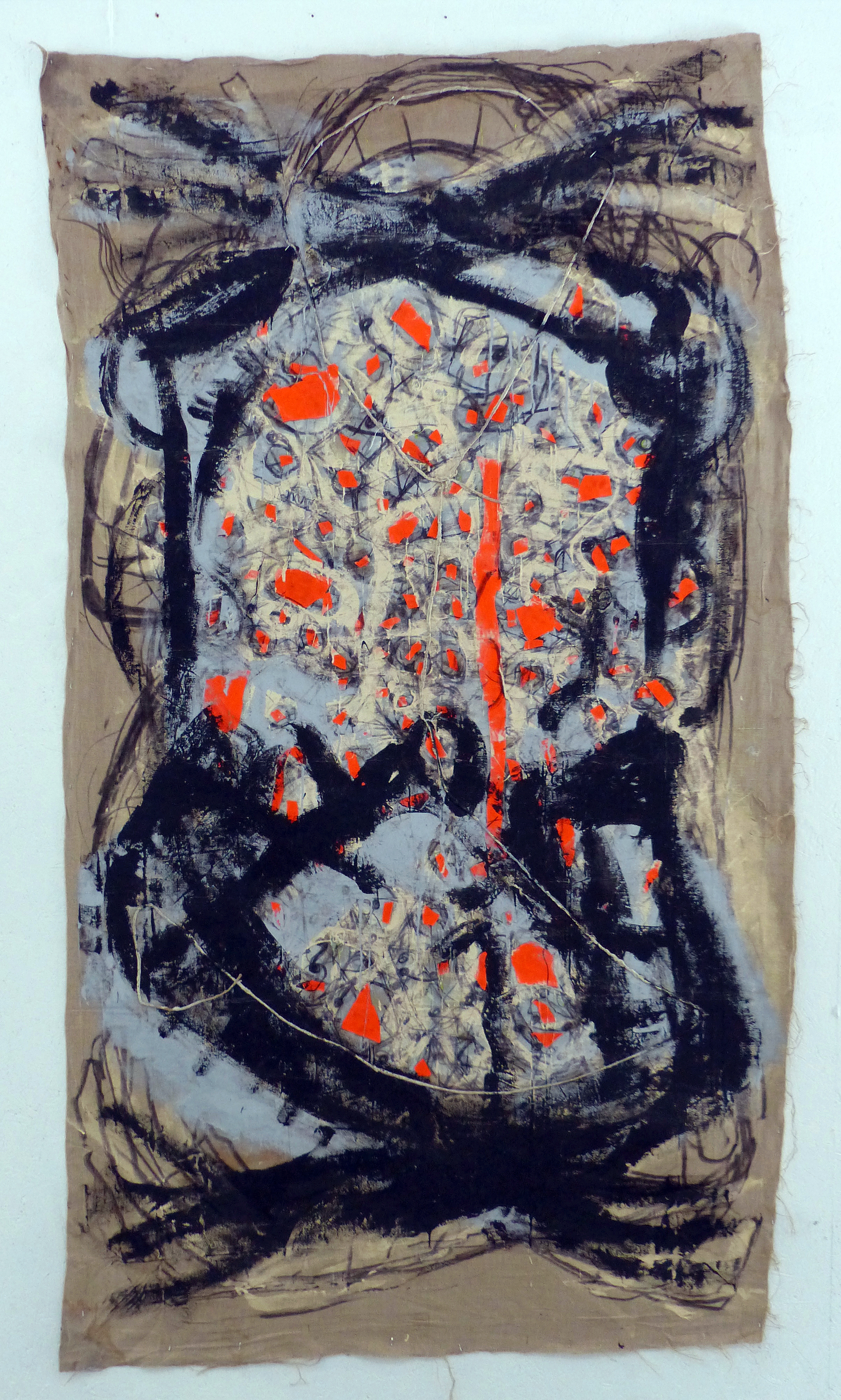 Luchs’s versions of gigantic, totemic frogs are also standout images that hold their own in the capacious, high-ceilinged expanse of MOCAD’s repurposed commercial building. Untitled Frog, from 1994, its body splayed and upright (two akimbo legs and webbed feet squeezed in at top and bottom), and towering nearly eight feet, has been dotted with a pattern of random, irregular patches of red-orange fabric. The bird’s eye view suggests a sunning frog or perhaps a captured, spread-out amphibian whose rotund body outlined with broad swaths of black pigment evoke its skittering, leaping motions. 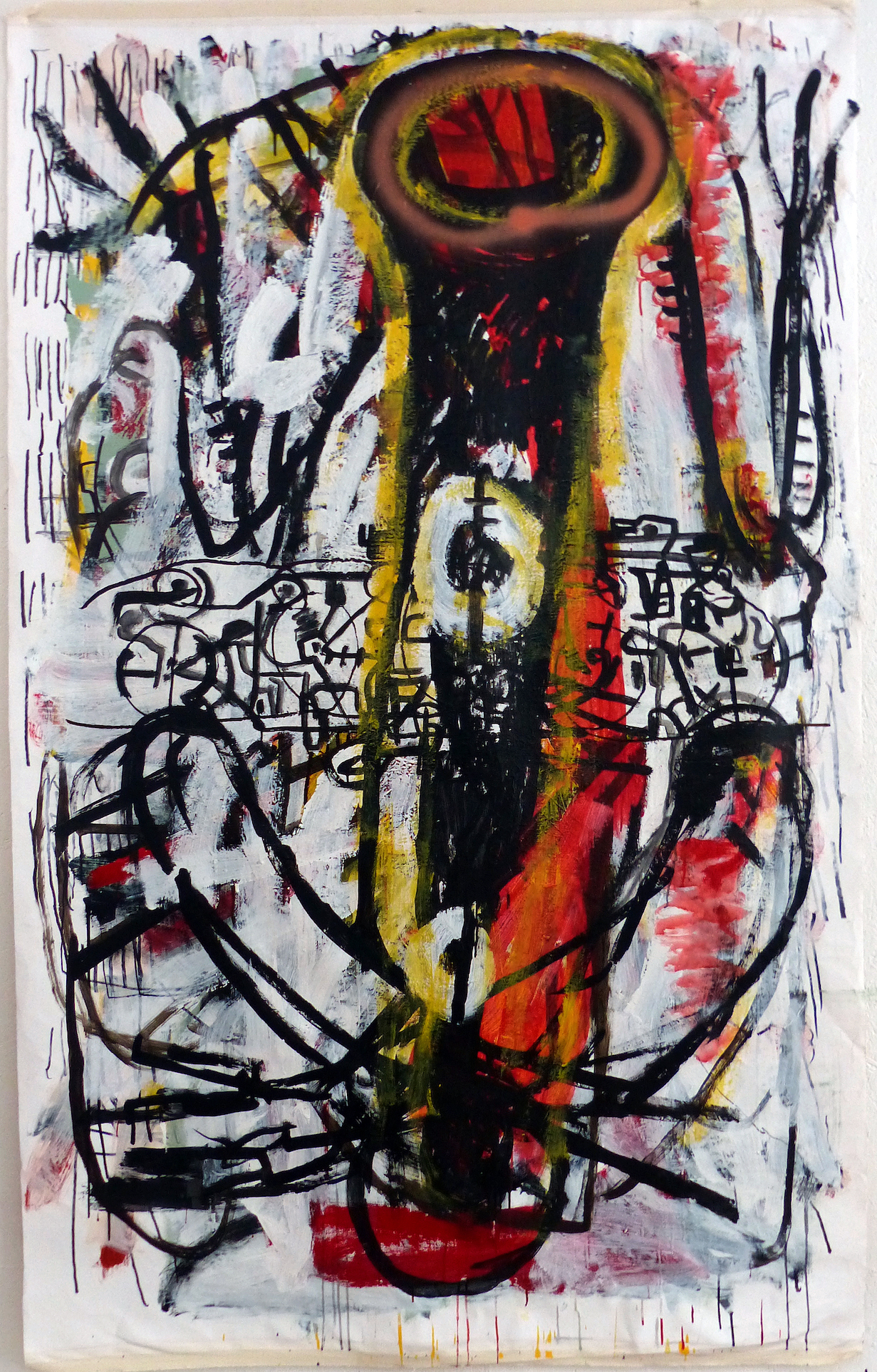 In two of the most recent frogs in the show (2018), their bulbous bodies and spasmodic legs have been overlaid with a trumpet extending from mouthpiece to bell, as if to signal that the noisy, raucous vocalizing of the frog is akin to the martial timbre of a blaring trumpet. In Trumpet Frog #2, a red tongue-like shape emerges from the bell of the trumpet as if to humanize the sound a visitor might hear issuing from the instrument, undertones surely consonant with the sensibility of Luchs who, as  his statement emblazoned on the gallery wall affirms, has wrought an art of “resilience…searching…absurdity…humor…[and] seriousness.”