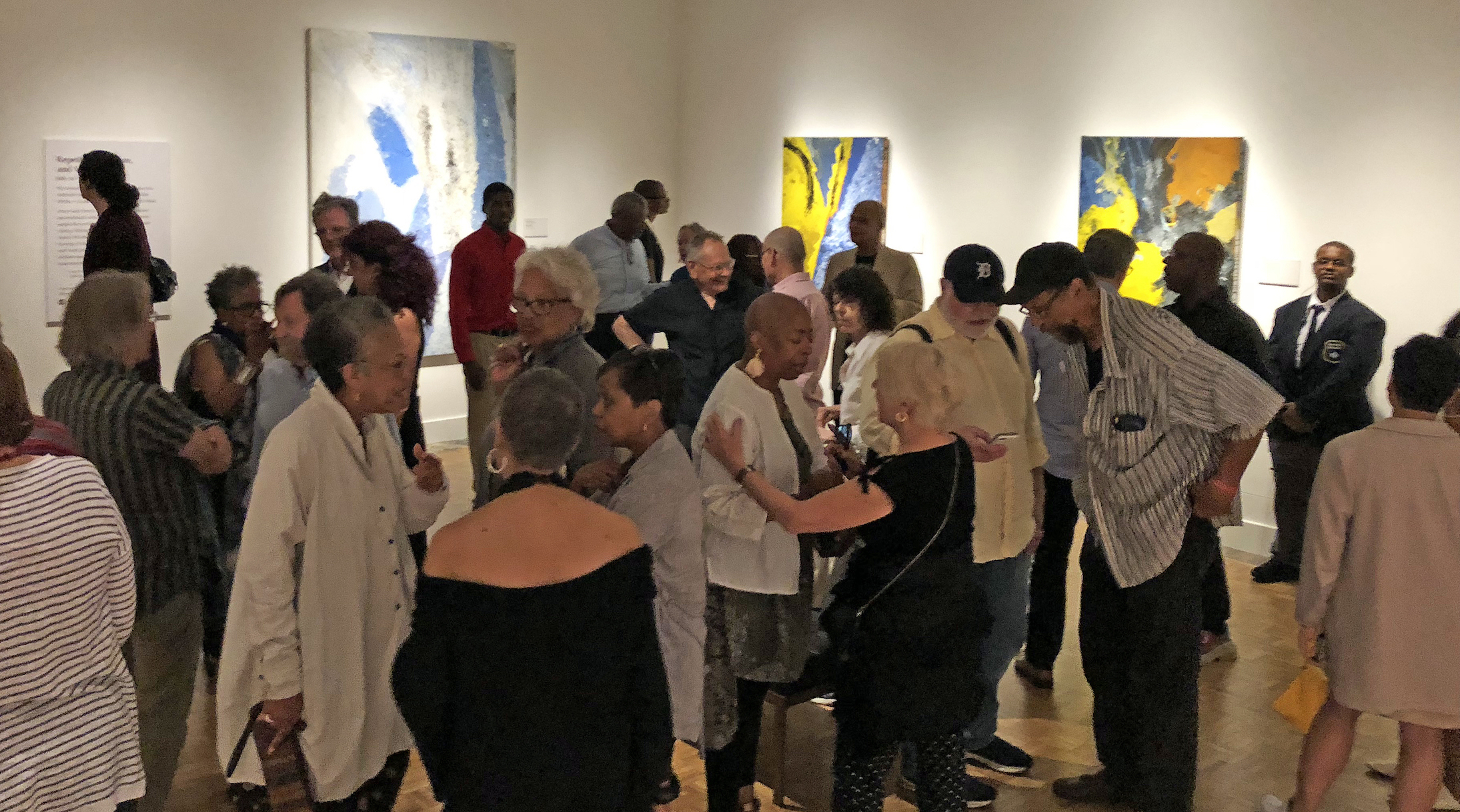 As part of the kick-off for the Detroit Art Week events, the Detroit Institute of Arts mounted an exhibition coordinated by Laurie Ann Farrell, department head of contemporary art at the museum and curated by Amani Olu, Repetition, Rhythm, and Vocab, features the visual art of Carole Harris and Allie McGhee. Both artists have been prominent in the Detroit art community for over forty years, each delivering their own individual language of abstraction. The celebration commenced with a talk, and this writer was pleasantly surprised to see a full house of guests in the DIA auditorium where the artists gave a part biographical, part philosophical, talk just before the opening of their two-person exhibition in the second floor Robinson Gallery. 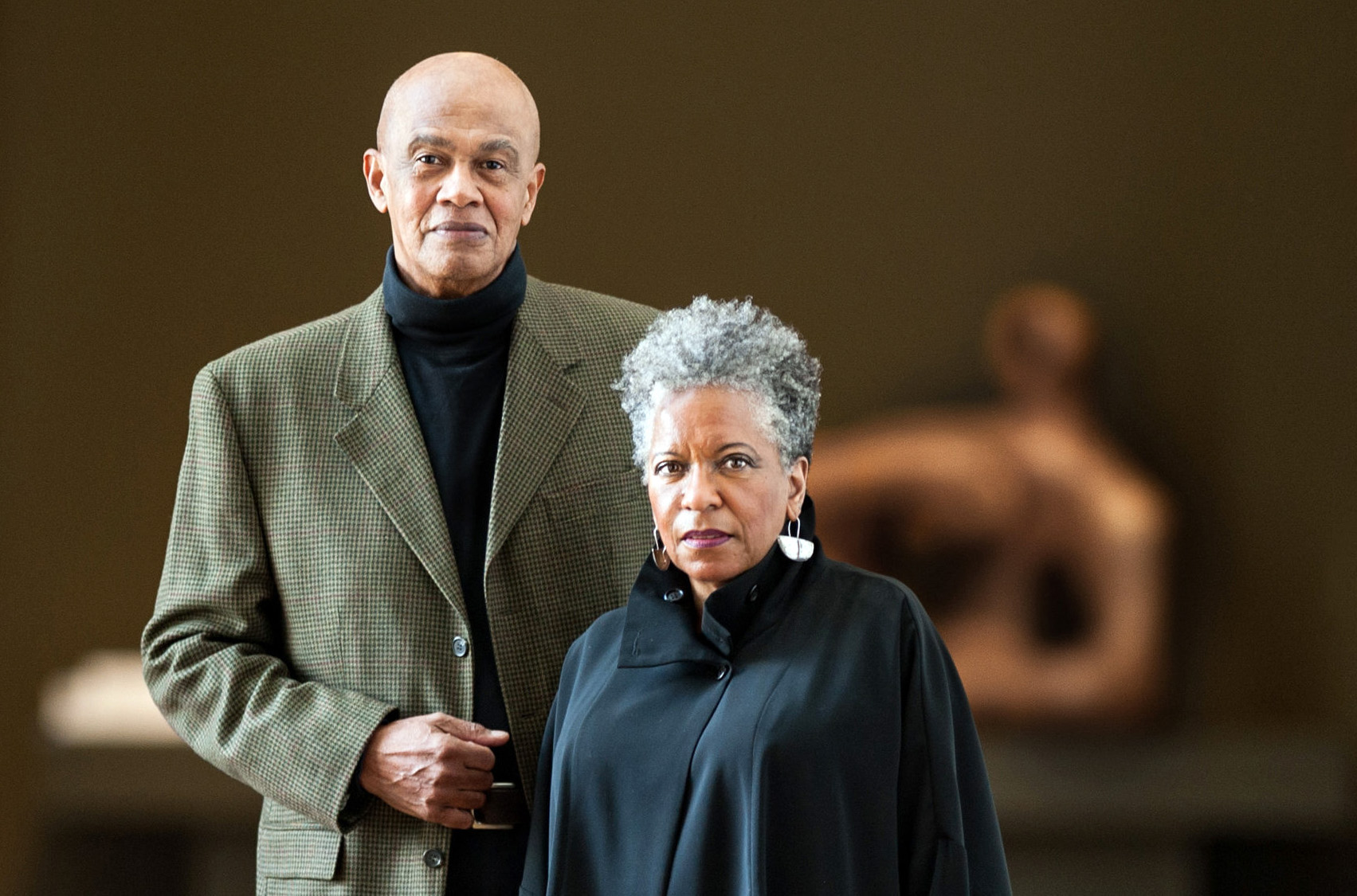 Introduced by DIA Director Salvador Salort-Pons, with remarks by Farrell, the talk was moderated by Amani Olu, the producer/organizer of the new Detroit Art Week.  Originally from Philadelphia, later working in New York City, Olu moved to Detroit in 2016 and founded a business to provide marketing and business consulting services to individuals, companies and organizations in the arts.  He said, “The overall vision is that we want to do our part to establish Detroit as a global destination for contemporary art just like every other major city.”

As the talk got underway, both artists shared many common themes, as they both were educated at Detroit’s Cass Technical High School and attended state colleges, Harris at Wayne State University, and McGhee at Eastern Michigan University.  They both mentioned the importance of early family support in their pursuit of art, as each told stories about their mother’s influence, and both did not see their work as part of any political movement, or part of Detroit’s revitalization, but more about a constant internal energy to create and evolve as an artist, regardless of politics or race. Harris mentioned her work was continually evolving, and McGhee suggested the influence of science, and both gave credit to the impact of the Kresge Foundation for the Arts.

I have written about both artists multiple times for exhibitions at the N’Namdi Center for Contemporary Art and most recently at the Hill Gallery where both artists’ work were present. Allie McGhee has a long exhibition record starting back in in the mid-1970’s.  McGhee says he favors using sticks to apply paint rather than brushes. Rejecting the brush, he pulls and scrapes the paint across his material, whether it is canvas or paper. The action of the stick allows McGhee’s hands to interact with the paint and the surface in a visceral way, where the thin paint spatters as he arranges his lathe-like constructions. He has often folded thick painted paper into shapes that display themselves as objects on the wall. 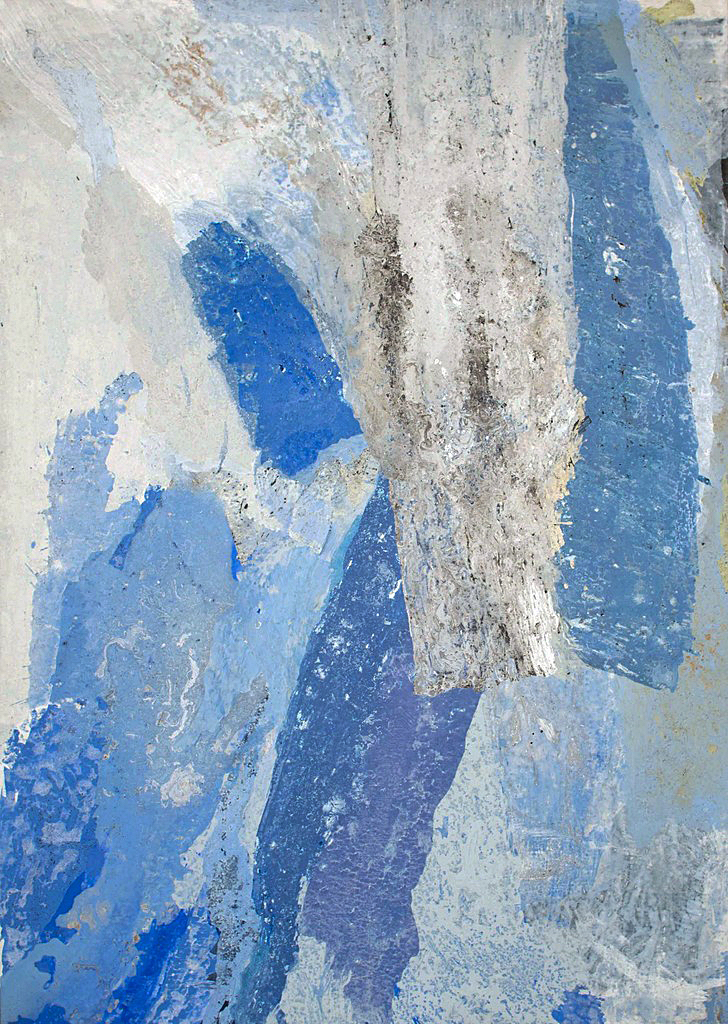 Music is an apt metaphor for McGhee’s methodology. Miles Davis, one of the artist’s favorite musicians, was an explorer of musical forms who gave up traditional jazz in favor of improvisation. Likewise, McGhee has talked about the art of experimentation, and working every day to explore a variety of paint mediums on a vast range of materials, from canvas to paper, window shades, fiberglass, wallpaper and cardboard.

As I wrote about his exhibition Now & Then at the N’Namdi Center for Contemporary Art, “ [McGhee’s] emphasis on discovered and spontaneous correlations that are twisted, crushed and crumpled, remind this writer of John Chamberlain, who worked in a similar fashion but mostly with metal and automobile parts. Given the time period of Allie McGhee’s formative years, the obvious influence here is Abstract Expressionism with shades of Willem de Kooning and Franz Kline that, despite a seemingly spontaneous appearance, maintains a balance of chaos and control.”  The steady march of fluid and spontaneous abstract expressionism has elevated the work of Allie McGhee to a significant force in Detroit alongside artists like Al Loving, Sam Gilliam and Charles McGee. 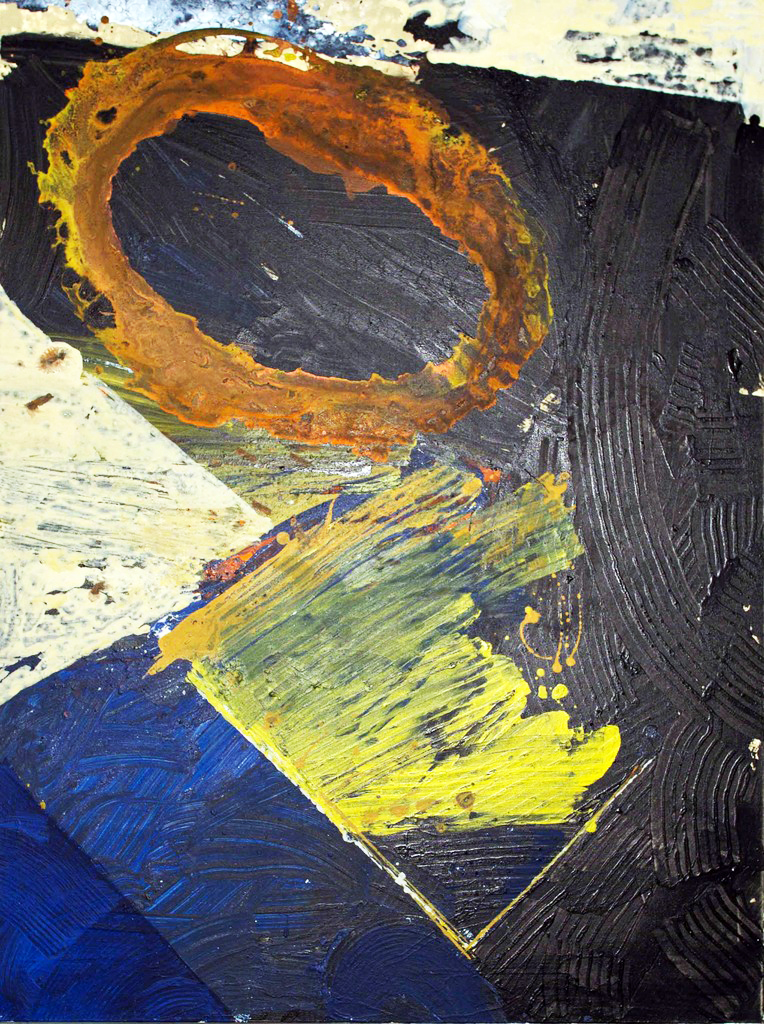 Carole Harris has been called a needle artist, a quilt artist and a fiber artist, but her work and life seem to have always been in transition.  Now her works of art are titled mixed media textile, and she seems most comfortable being described as a visual artist. It has been a journey for Harris whose mother introduced her to needle arts at an early age while teaching her embroidery and crocheting.  She has had a career as an interior designer working with architectural firms, but the road has led her to express herself with stand-alone mixed media constructions that hang on the wall.  “My work relies on improvisation. I am fascinated with hue and pattern, often drawing inspiration from the color, energy, and movement. It’s like the rhythms of ethnographic rituals as well as jazz, blues, and gospel music that I have learned growing up in Detroit.” 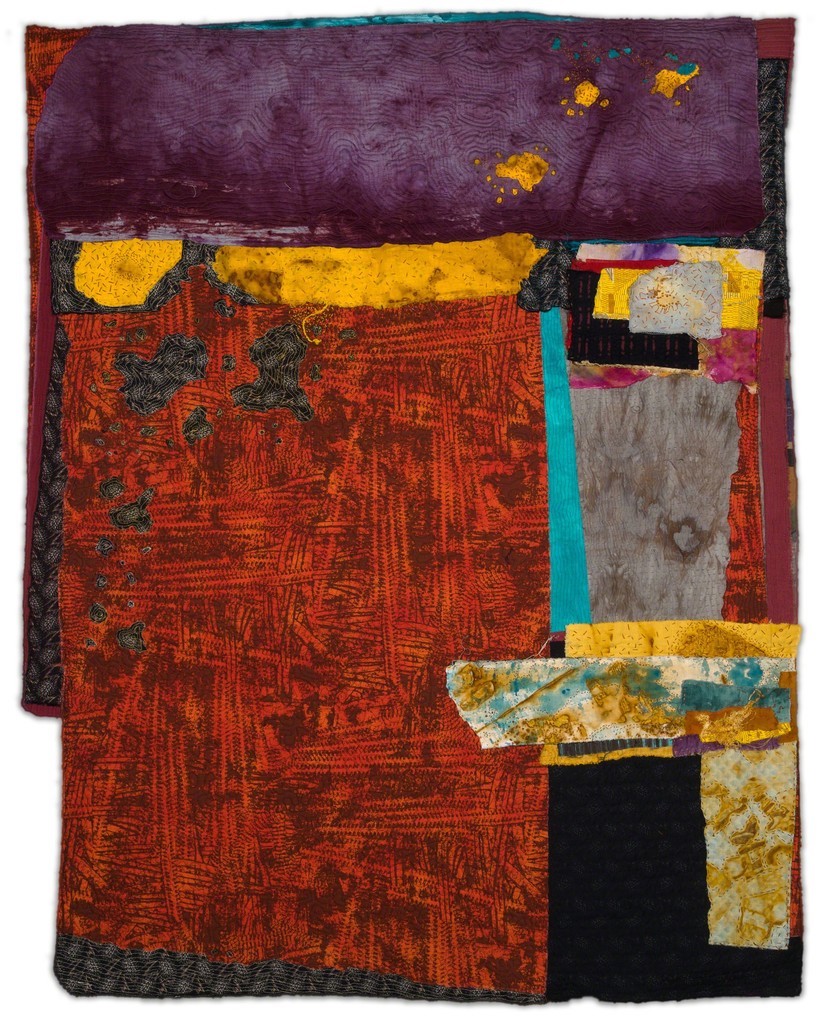 The first thing that jumps out from the work Bearing Witnessis not her choice of material, but her use of color, form and composition.  The strength she demonstrates draws on her informal use of space, the counter-play of color, and the texture given to torn shapes and line work.

When I wrote about her work in April 2016, I described it like this: “For visual artists who quilt, Harris’s work transcends the traditional expectations we think of when mentioning quilting. In a web-based reproduction, we see an abstract painting, dynamic in the use of color, line, shape and form. It’s only on closer observation that one realizes these are compositions executed using embroidery, stitchery and multiple patterns of cotton, silks and hand-dyed fabric.”

Glen Mannisto wrote for the Detroit Art Review about Carole Harris’s solo exhibition at University of Michigan NCRC Rotunda Gallery. “Bearing Witnessis a tour de force of contemporary image making. It amalgamates not only Harris’s quilt-making magic with the disparate influences of her far-reaching eye, but is a profoundly rich metaphor for the deep struggle of living, of the balancing of life’s experiences, of listening and watching and caring for the world. This sublimely visual layering of color, shape and line is not only an act of art but — what resonates through in this process of layering the fabric of life by hand— is an act of deep caring. The title “Bearing Witness” is thus not misplaced on Carole Harris’ practice as a whole.” 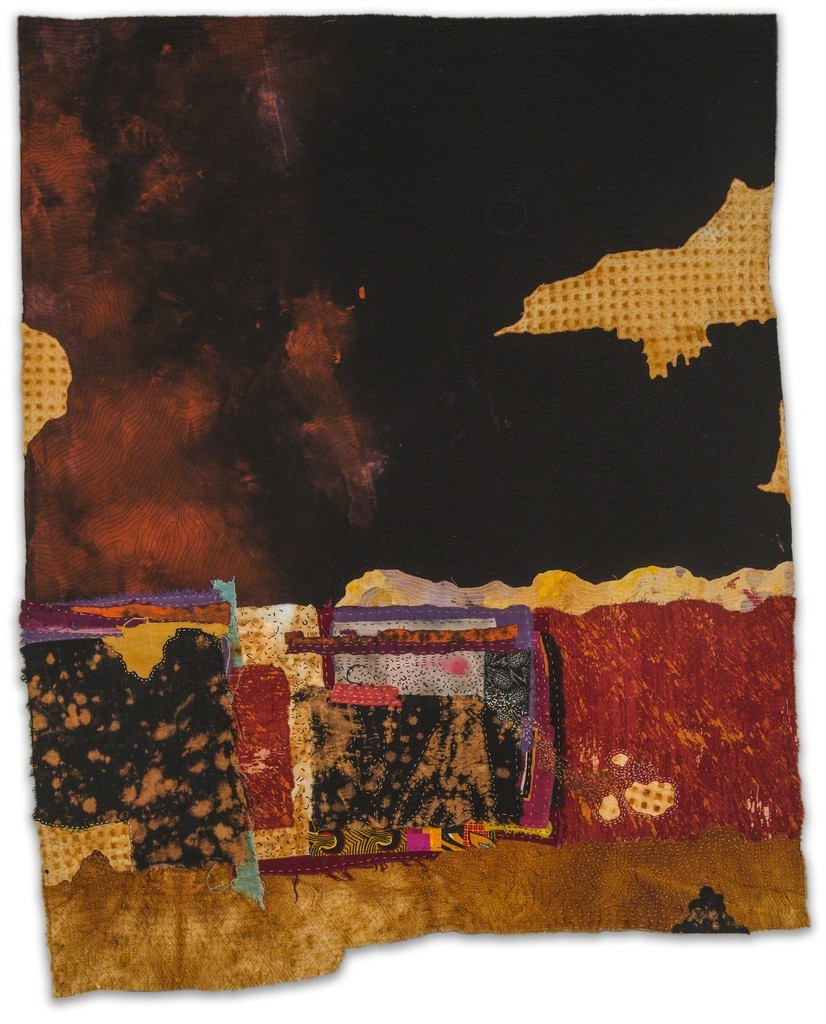 Carole Harris and Allie McGhee’s distinct abstract language has evolved for more than forty years. McGhee is a painter whose abstraction rises to the top based on day-in and day-out hard work where he pours his pigment and allows himself to release an intuition to create variations in composition, color and shape.  Carole Harris rises beyond the confines of fiber or quilted art, revising her decisions that are usually set in place by a medium that progresses linearly. Both of these artists have endured using a distinct abstract aesthetic that has created an homage to the harmony of an improvisational language of abstract expressionism.

In mid-July, during the dog days of summer when the art scene usually lays back and starts to plan and prepare for the fall season, the concept of Detroit Art Week provides some attention to Detroit artists and hopefully creates a tradition for years to come.

Detroit Institute of Arts, Repetition, Rhythm, and Vocabruns through November 4, 2018