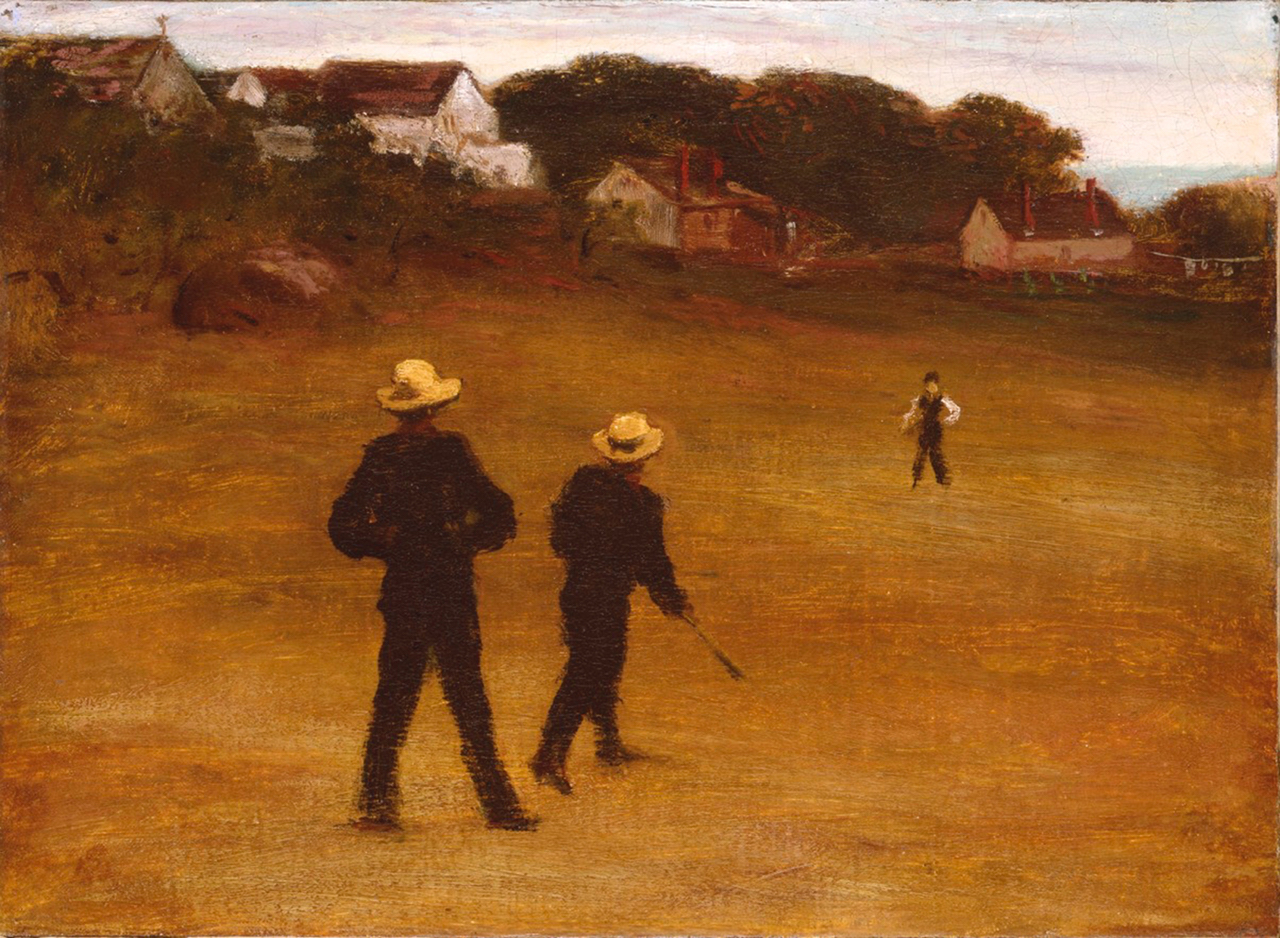 The great American pass time returns to the DIA for a second season with selections from the extensive memorabilia collection of Rochester, Michigan, attorney E. Powell Miller. Last year’s exhibit featured my personal favorites, the ‘68 Tigers. This year’s star players are the 1907, ‘08, and ’09 American League champion Tigers, and the phenomenal ‘84 Tigers. Detroit fans of the game will certainly enjoy this. Not to be overlooked at the beginning of the exhibit are the National League’s 1887 champions, the Detroit Wolverines. Detroit businessman Frederick Stearns purchased the Wolverines in 1885, the same year he helped found the Detroit Institute of Arts. The cross pollination of high art and the art of the commonplace, in the same venue, infuses both with a lively acculturation.

Baseball trading cards figure prominently in the show: in particular, an extraordinary“T206 White Border Set, 1909 – 1911” from the American Tobacco Co. The Metropolitan Museum of Art in New York has exhibited baseball cards, but this collection is “better” according to Miller. He is justifiably proud of possessing one of the top collections of rare cards anywhere, and he revels in Motown besting NYC. 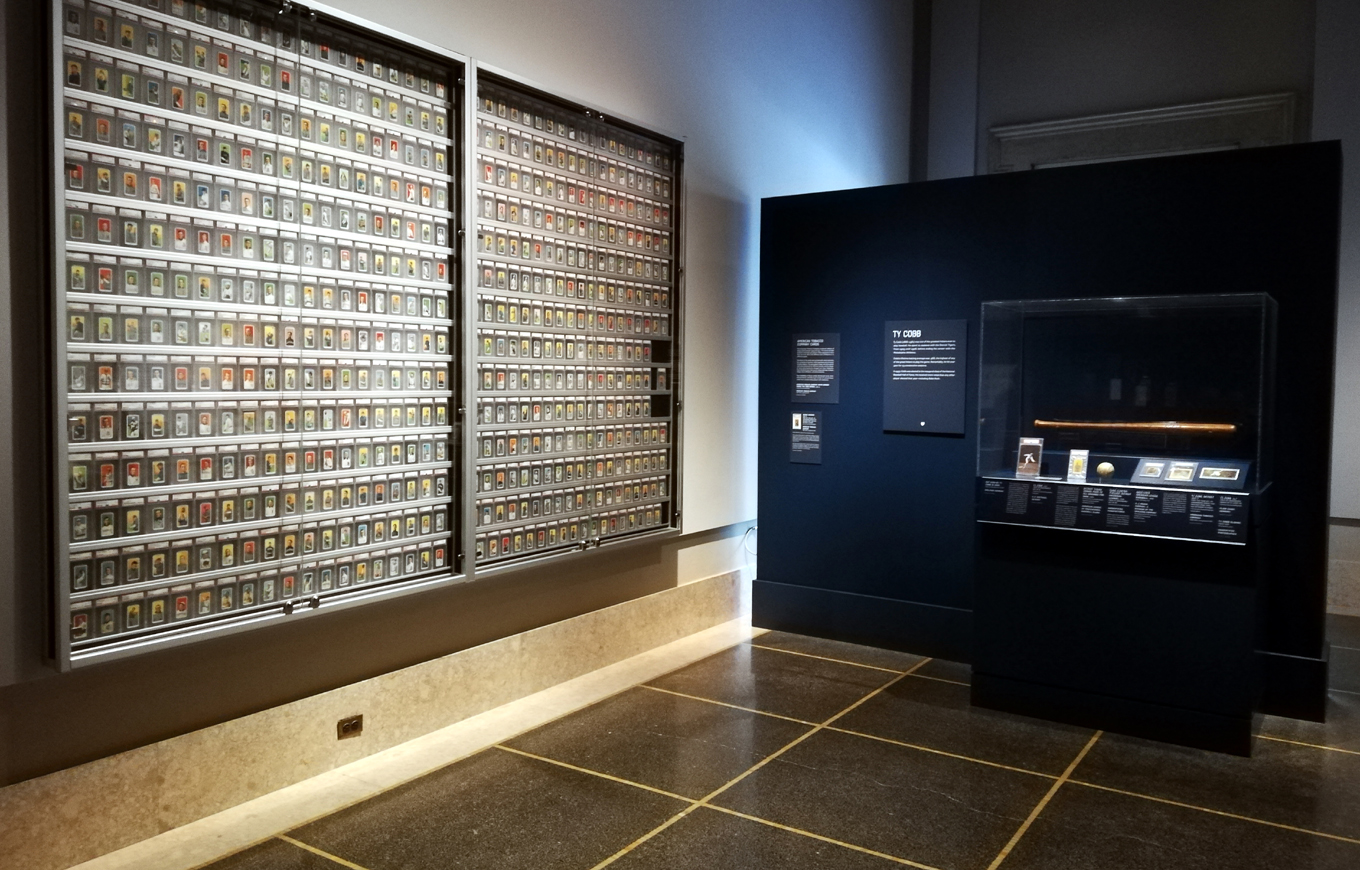 The ‘84 tigers are well represented too, with a unique ‘retro’ feature. A maple finish, Early American-style console color TV loops a reconstructed broadcast of Kirk Gibson’s 3 run homer off ace reliever “Goose” Gossage of the Padres, pretty much sealing the deal for Detroit in game five of the World Series. Flanking the TV set are autographed team jerseys worn on the field by Gossage and Gibson.

If you collected cards as a kid (or still collect them,) or remember the summertime thrill of Ernie Harwell’s “That one is loooong gone!” or experienced the Tigers’ winning it all in ‘68 or ‘84, watch out for the wistful nostalgia permeating this exhibit.
Play Ball! Transforming the Game, 1876-2019 is organized by the Detroit Institute of Arts.   June 15 – September 15, 2019; free with museum admission.

Humble and Human: Impressionist Era Treasures from the Albright-Knox Art Gallery and the Detroit Institute of Arts, an Exhibition in Honor of Ralph C. Wilson, Jr. @ the DIA 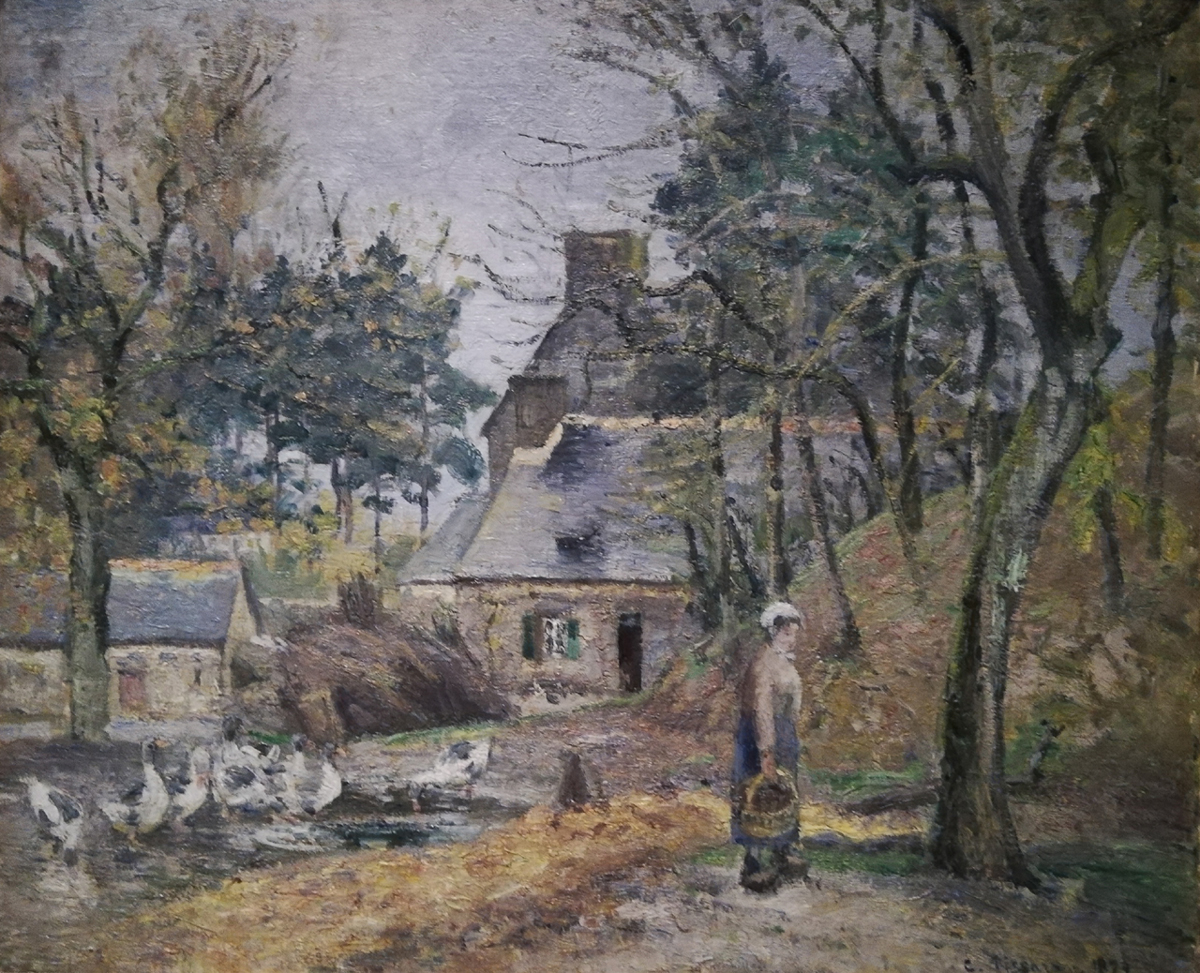 Another smaller scale exhibit at the museum is also related to professional sports, albeit indirectly. Ralph C. Wilson, Jr. (1918 – 2014) was the founding owner of the Buffalo Bills AFC football team. Humble and Human is a tribute to Wilson: businessman, philanthropist, and art collector who focused on French Impressionism. Raised in Detroit, Wilson called both Detroit and Buffalo “home” – two cities noted for their large working-class populations and love of hometown professional sports teams. Wilson had an affinity for the beauty and significance to be found in the ordinary stuff of life. He saw in Impressionist subjects facets of his own appreciation of the everyday. It might be a simple path next to a canal with a factory in the distance, a woman sewing, or farmers tilling the soil, it was all worthy of a painter’s memorialization. 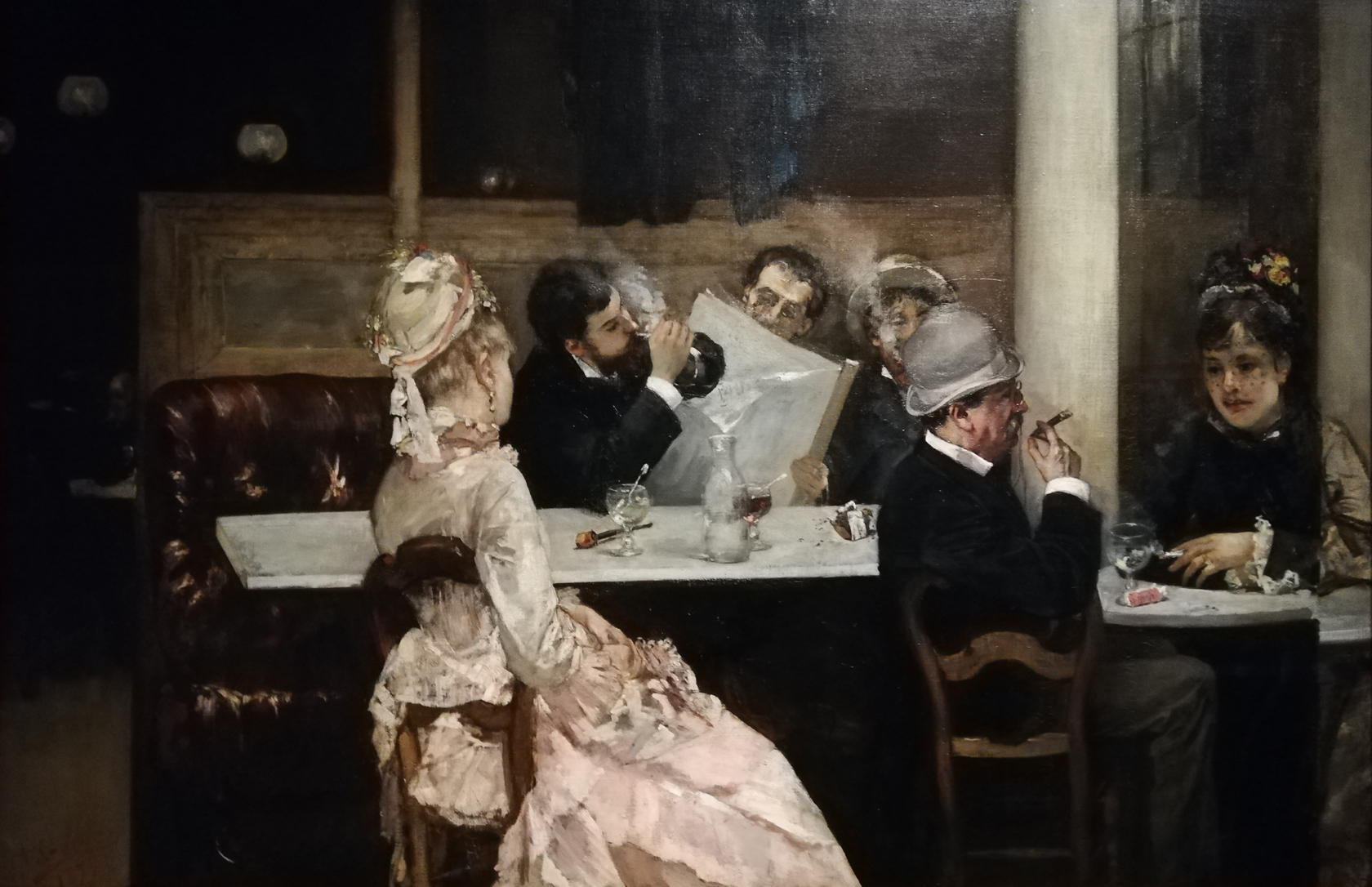 In a video interview with Mary Wilson, Ralph Wilson’s widow and board member of the Wilson Foundation, she relates how “he fell in love” with a Monet and purchased it at auction. From there he built his collection to include Degas, Morrisot, Pissaro, Renior and others. Humble and Human reveals a thoughtful collection with varied examples of a revolutionary movement in art. Several atypical pieces are note-worthy – for example, an early Renoir landscape, or a small figure sculpture by Gauguin. Through the three galleries of the exhibit, one can trace the progression of 19th century French art from Realism (Courbet) through Impressionism (Monet) to Post-Impressionism (Van Gogh) and the cusp of Modernism (Gauguin.) 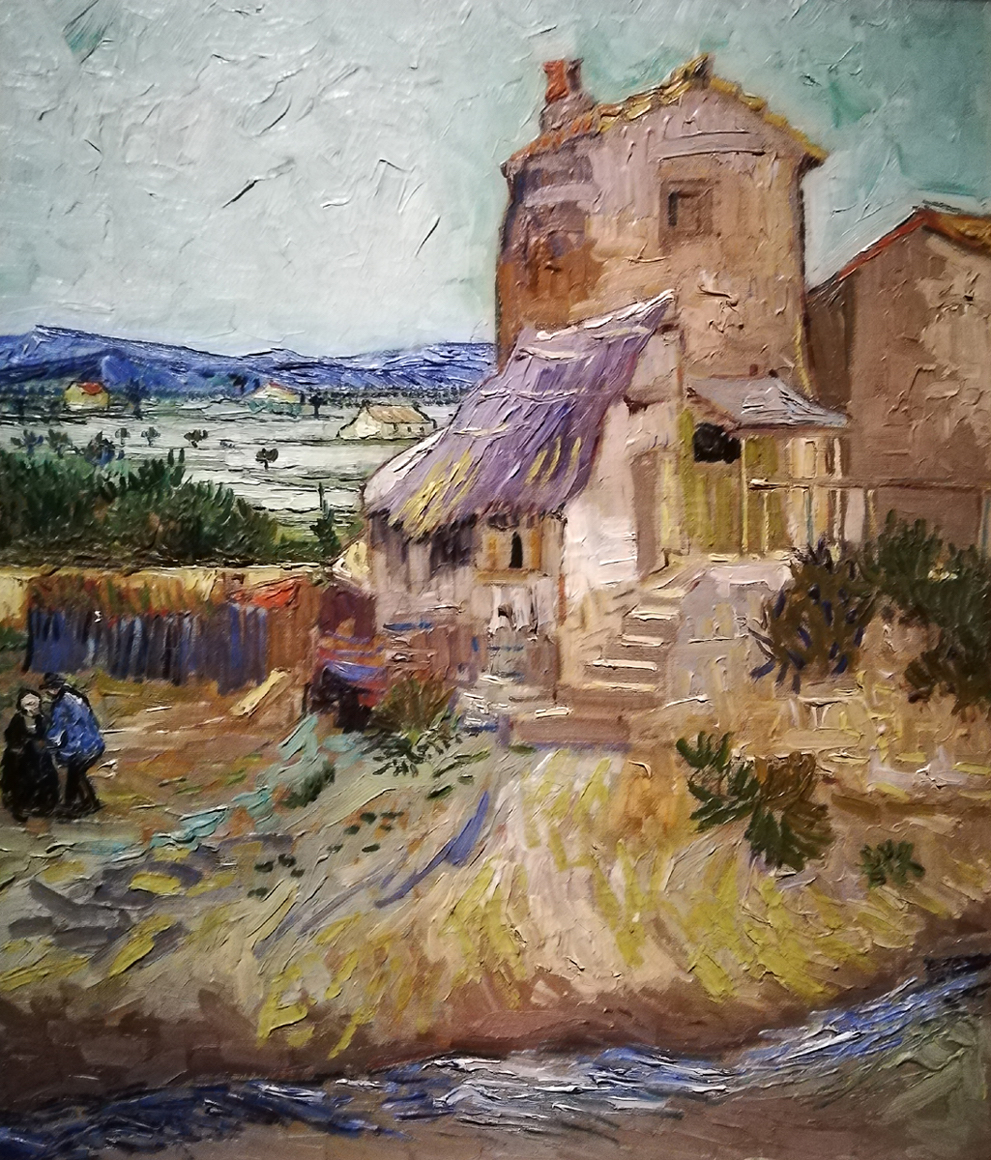 Mention should be made of the unusually dark walls of the galleries for this show. The works are lit with intense spots, separating each with discrete auras. This not uncommon display technique facilitates concentrated viewing of the individual works. Here, the pronounced contrast between the pieces and the gallery walls might be surprising, but the effect does not overwhelm. Once attuned, the viewer appreciates a momentary isolation before each work. 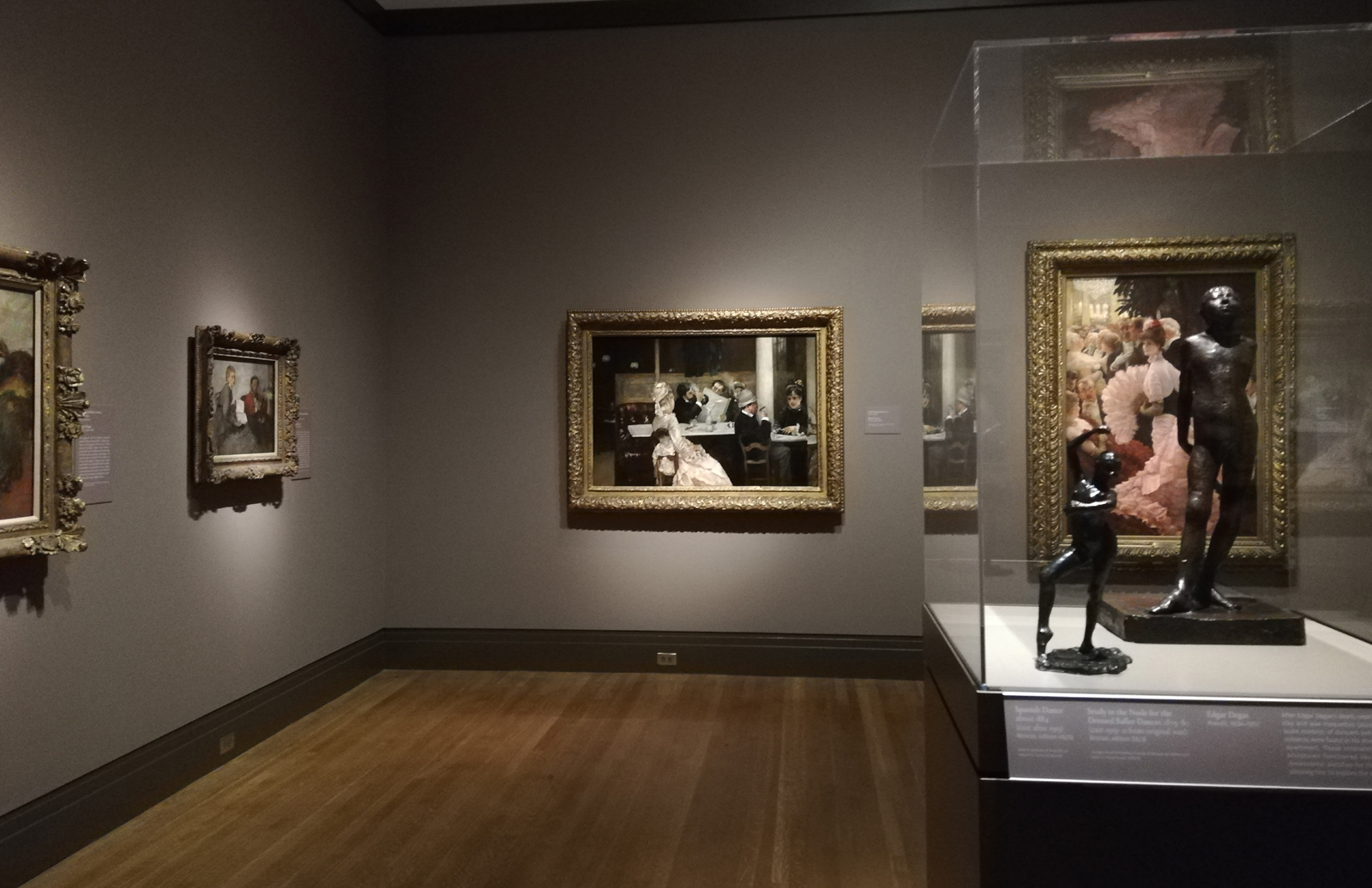 Humble and Human: Impressionist Era Treasures from the Albright-Knox Art Gallery and the Detroit Institute of Arts, an Exhibition in Honor of Ralph C. Wilson, Jr. is organized by the Detroit Institute of Arts and the Albright-Knox Art Gallery, Buffalo, New York. The exhibition is made possible by the generous support of the Ralph C. Wilson Jr. Foundation.  This exhibition is a part of the Bonnie Ann Larson Modern European Masters Series.