My first impression of artist Richard Lewis came from an exhibition at CCS Center Galleries in 2017. Evidence of Things Not Seen was written by Sarah Rose Sharp and consisted of a collection of drawings, featuring works on paper by Richard Lewis, Mario Moore, Sabrina Nelson and Rashaun Rucker and, let’s not forget, was curated by Michelle Perron. It was the drawing, Rent Party, 48 x 60” where Richard Lewis demonstrated his incredible ability to imagine and draw. For Richard Lewis, it was something that he began at age four.

Fast forward to the opening of his solo exhibition on August 13, 2021, at Galerie Camille and a collection of eleven oil paintings, a combination of figure and still life paintings that are both bold and traditional representational artwork. “These are mostly friends and family.” He said in a modest, hushed voice.

Lewis grew up in Detroit, attended Cass Technical High School, and after college and graduate school, returned to live his life where it began, among his family and friends in the city. 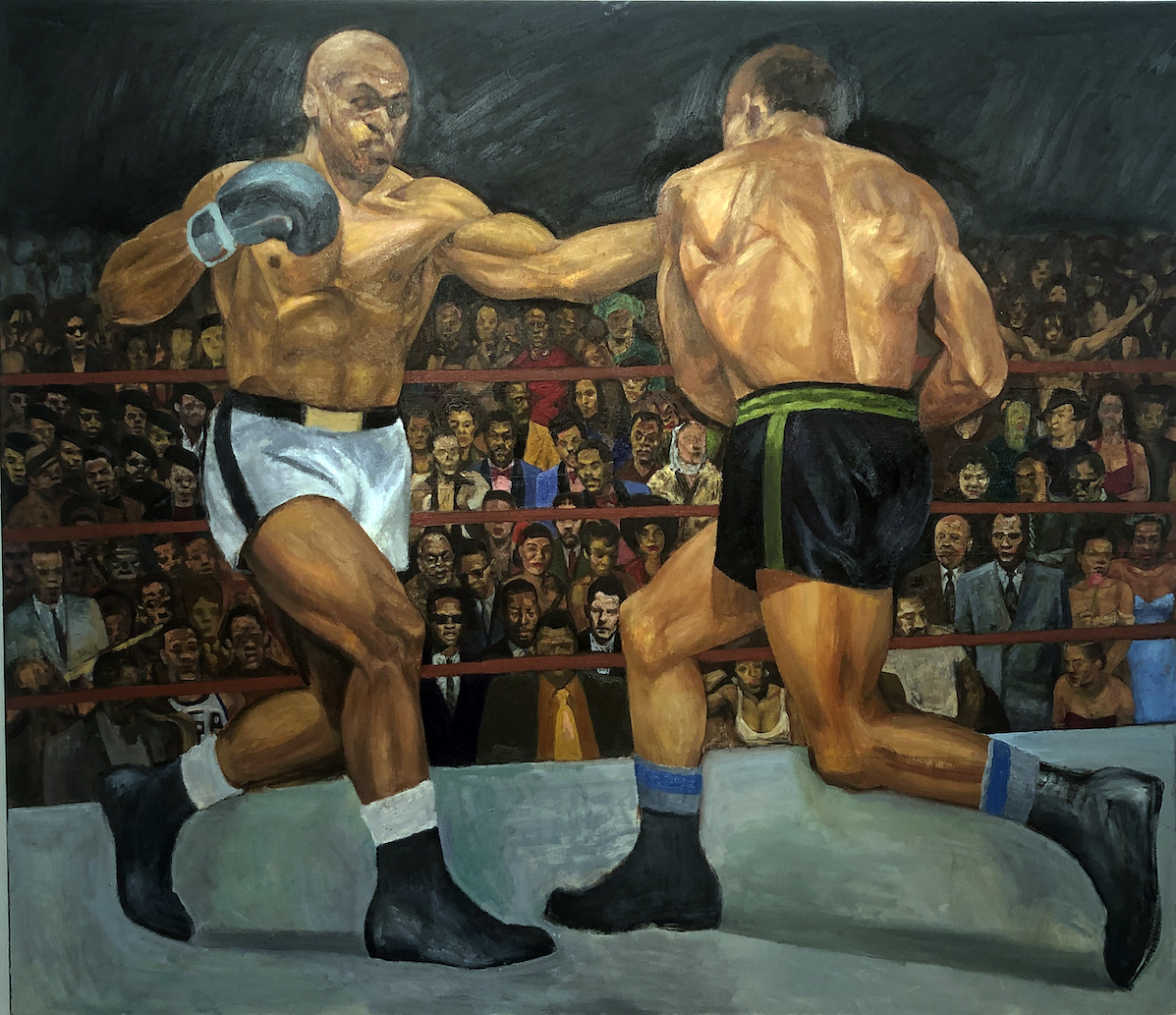 From ancient times to the present, the visual and emotional drama that is inherent in the sport of boxing has always attracted and inspired artists. What leads the show is this large oil painting, Takyi the Boxer, which draws on George Bellows, Club Night in 1907, where realism is on view from a point placing the viewer close to the action and looking beyond into a large audience of dark-skinned people. The painting Club Night was followed by The Brown Bomber by Robert Riggs, 1938, and here Lewis is drawn to the Ghanaian Boxer Samuel Takyi, where he won the Bronze medal in the Olympic games. It is a nostalgic painting, paying homage to the famous boxer of color. 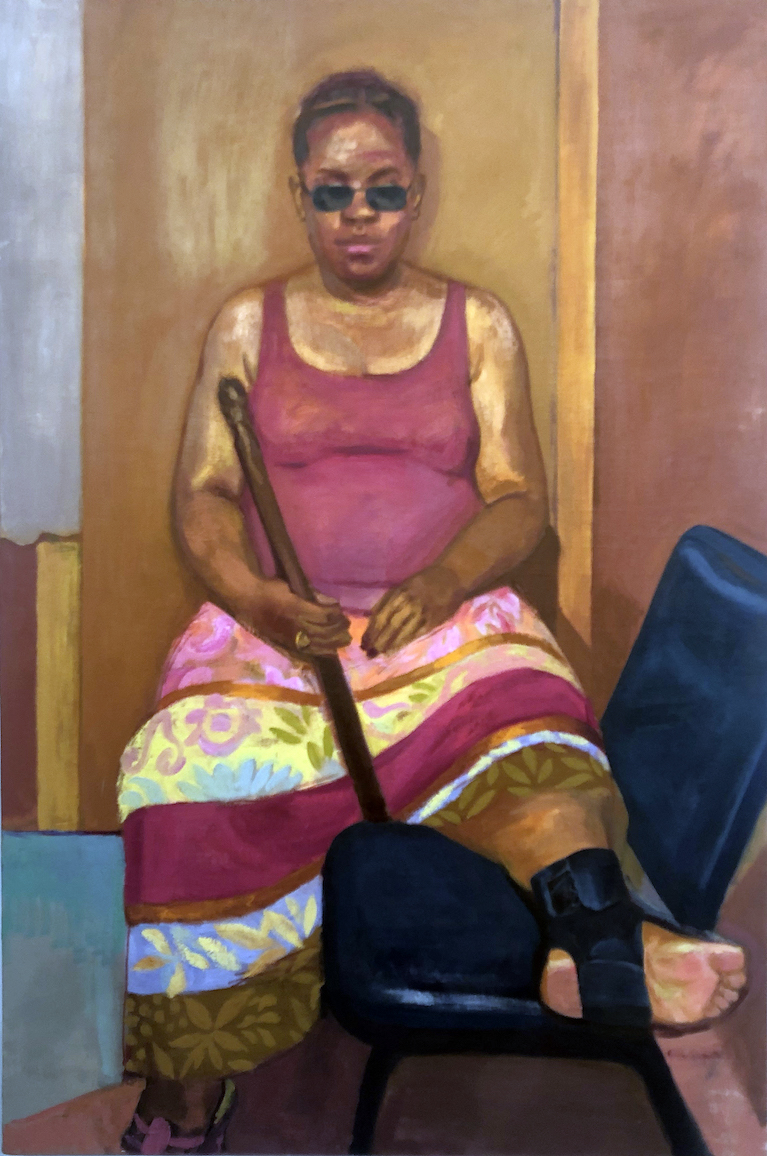 Richard Lewis, Tracey with an Ankle Brace, Oil on Linen on Plywood, 72 x 48″

Richard Lewis conveyed to me that he is using family and friends as models for these somewhat casual figure paintings that capture a pose quickly and go so far as to say they are works in progress. “The show is called ’Works in Progress’ because I usually consider my paintings ongoing.  I never have drastic changes in my work, but a deepening understanding, or simply a different perspective, that comes from working on something over time.” 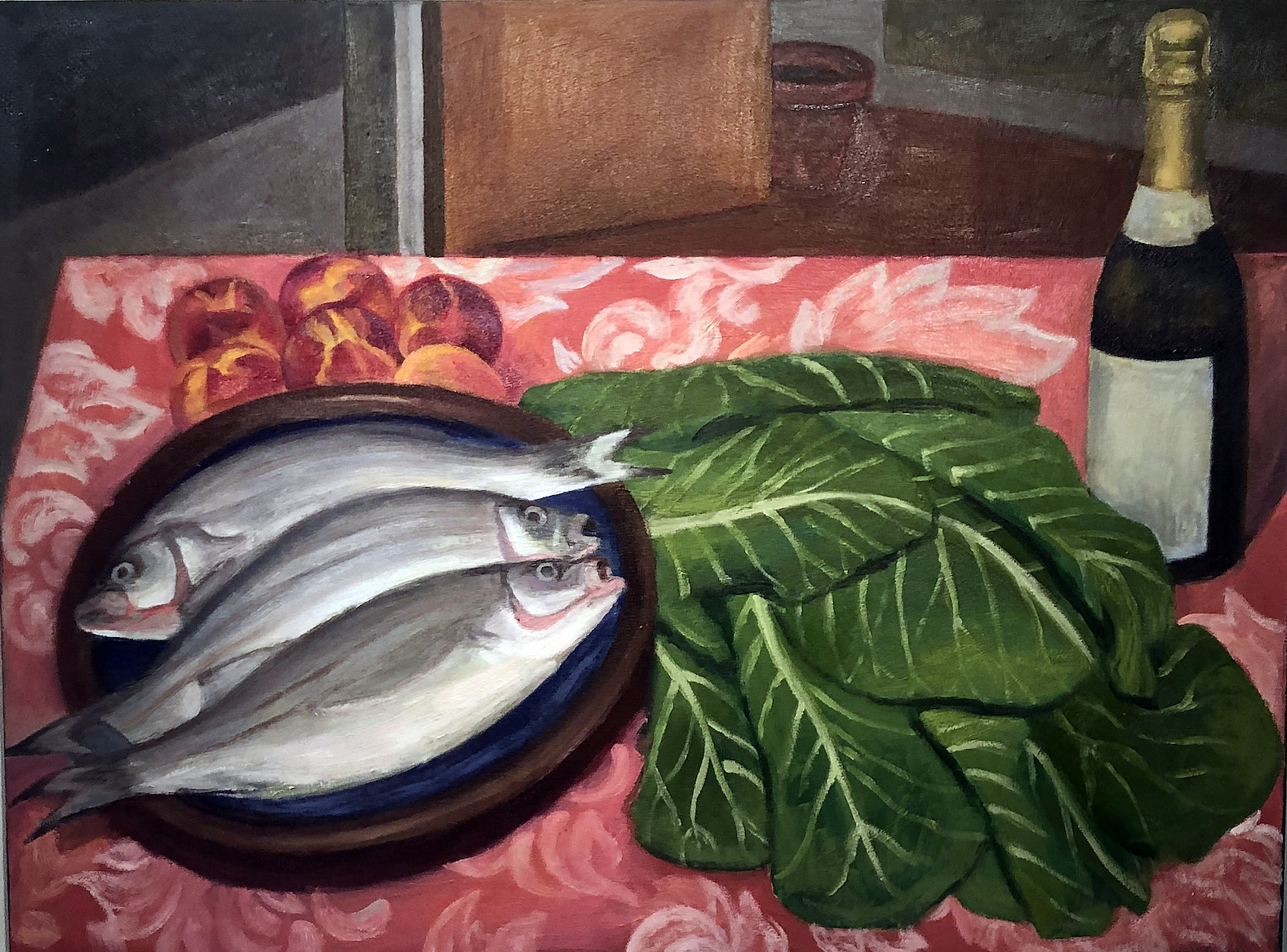 The still life painting, Still Life with Fish, flattens out the space and leans on the work of Paul Cezanne in this depiction of a plate of three fish and some lettuce, peaches and a bottle of Champagne using primary and secondary color, and the print missing from the bottle label. The artwork in this exhibition is simple, traditional, straightforward and personal. 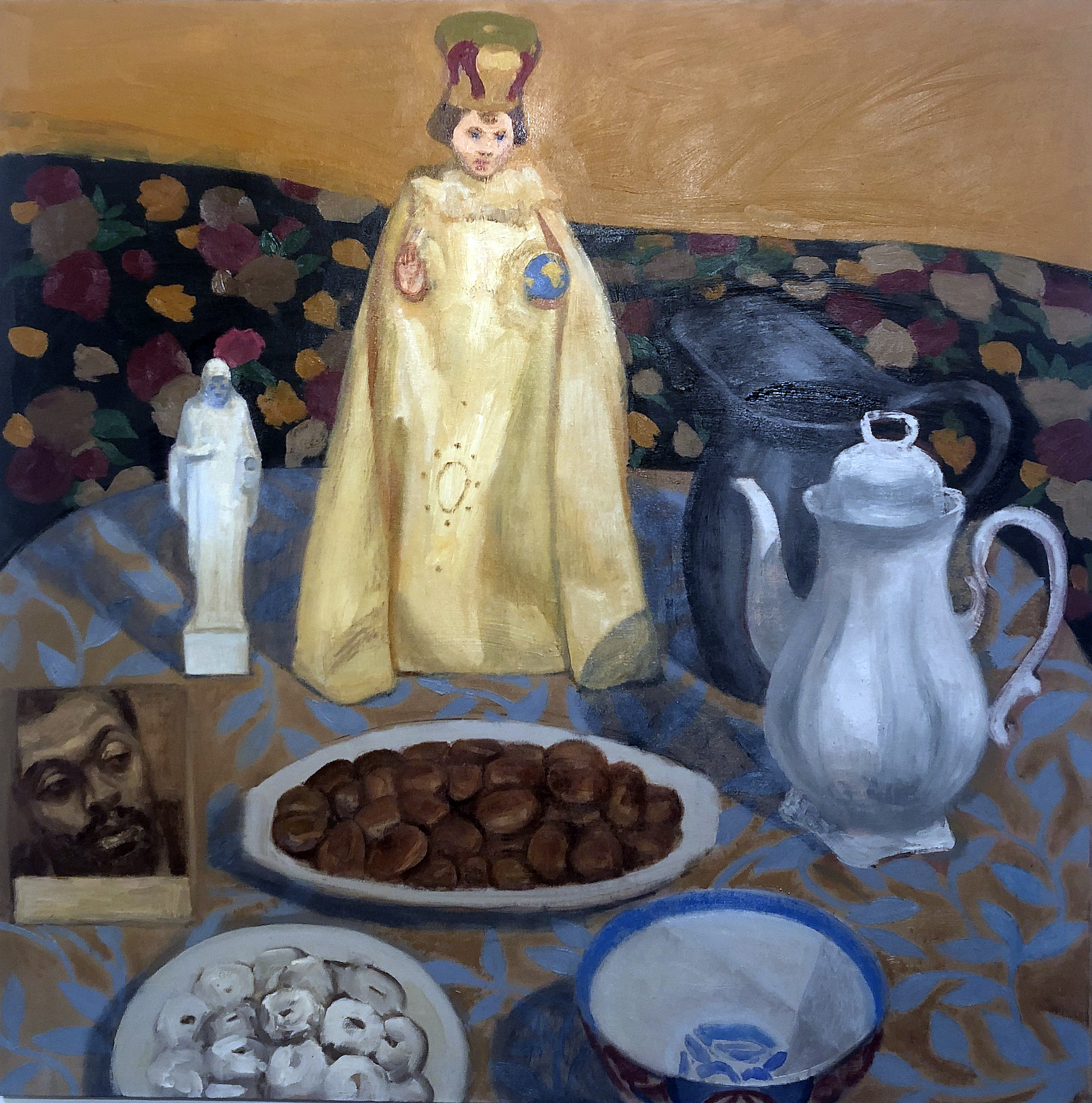 Spatially and equally flattened out, the still life, Still Life with Alter, has its light source coming from the right across the table cloth and combines pitchers, a bowl, a plate of chocolates, a small picture of a friend, and two religious statues. The larger statue dominates the entire composition.  I am drawn to the sacred statues, but that may just be a personal preference. I also like the addition of the small photo and the print pattern on the floor. 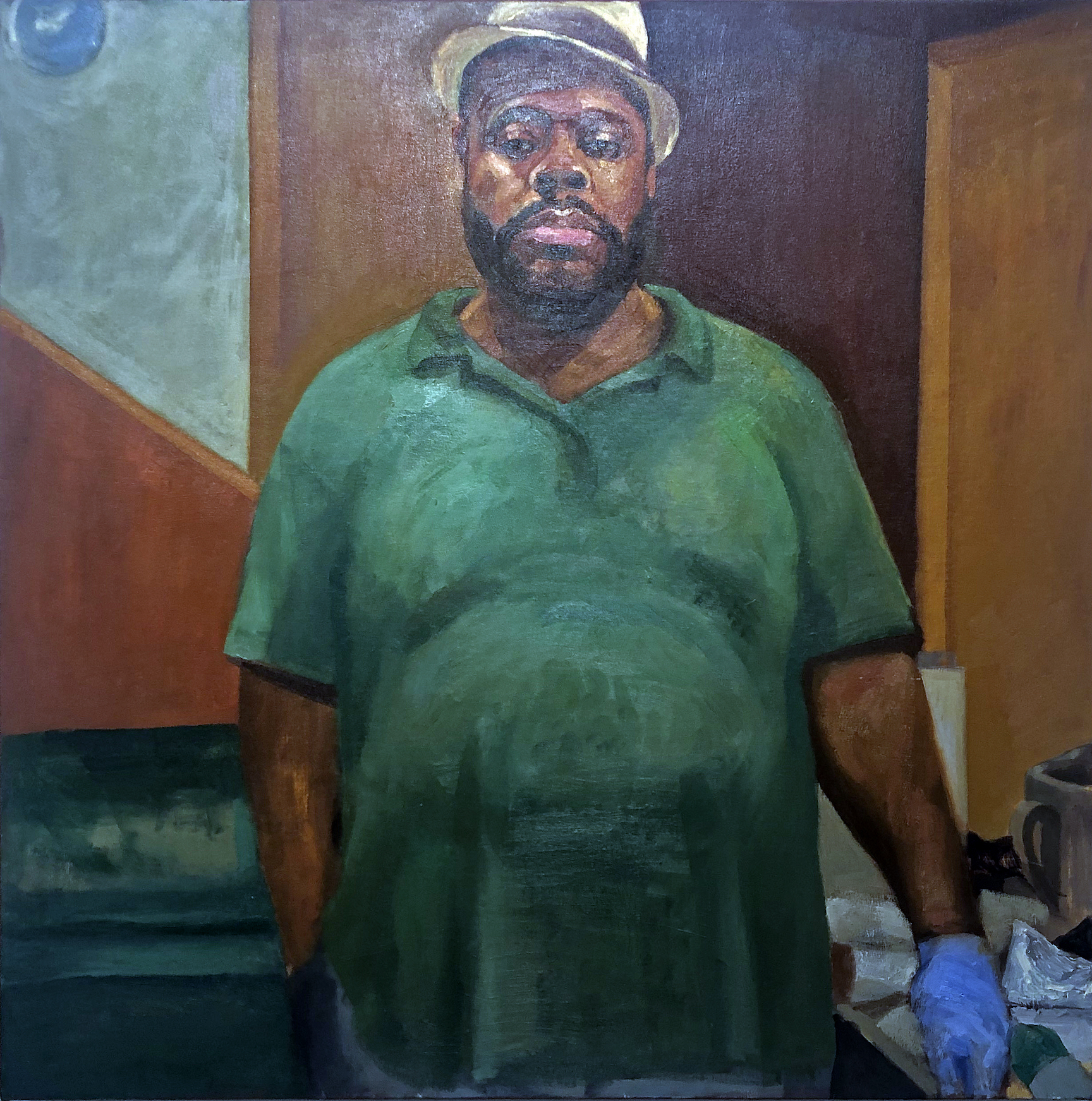 The large self-portrait he titles Noir Self-Portrait is a big close-up of the artist wearing a BIG green shirt, hat, and a blue glove. One of its strengths is that it is simple enough. Noir is French for black, a type of fiction with tough characters, cynical, bleak, and pessimistic nature. It is good to always have some self-portraits, and Lewis delivers here by keeping his eyes on the viewer.

Richard Lewis was born in Detroit in 1966. He graduated from Cass Technical High School in 1985. He earned his B.F.A. from College for Creative Studies and his M.F.A. from the Yale School of Art. He was awarded the Kresge Foundation Fellowship in 2011, which was well deserved.

The Galerie Camille presents A Work in Progress, August 13, and runs through September  11, 2021