The lion’s share of Rosalind Tallmadge’s large, luminous paintings in “Terrain” at Detroit’s David Klein Gallery call to mind relief maps, drone’s-eye views of alien, metallic worlds with surfaces both beautiful and hard, and utterly inhospitable to human life. The show, which features work all completed in 2021, is up through Dec. 18, 2021.

But these light-filled, fraught surfaces are actually more earth-bound than you might initially guess because, in addition to piling up natural elements in rich, stratified layers, Tallmadge pulls in a range of man-made materials that evoke both fashion and femininity, whether sequins, glass beads, or glitter. And who doesn’t like glitter?

Several of the most striking pieces on display, including “Ember,” “Dusk Lightning” and “Cross Section X” are so highly reflective, despite their variegated texture, you’d swear they were giving off heat. This is particularly the case with the appropriately named “Ember,” which is covered in a rose-toned gold leaf that resembles polished copper and hooks you with seductive warmth and the lure of the sparkle.

These are paintings with a visceral physical presence, products of a creative synthesis Tallmadge, a 2015 Cranbrook Academy of Art graduate now living in Brooklyn, N.Y., terms “disco alchemy.” For all their brightness, these works ideally call for consideration over the long term, an unhurried process of getting to know the idiosyncratic geography on each sequin-fabric canvas. They’re not cheap dates. They’ll reveal even more of themselves over time.

The rewards associated with this work, it must be noted, are not of the chirpy sort. The paintings exude an almost Cassandra-like vibe, glimpses of an out-of-control future, however glittering. Some pieces are utterly beautiful – there’s no other word. But they’re all grave in aspect as if they sprang from worlds where the zeitgeist is grim. 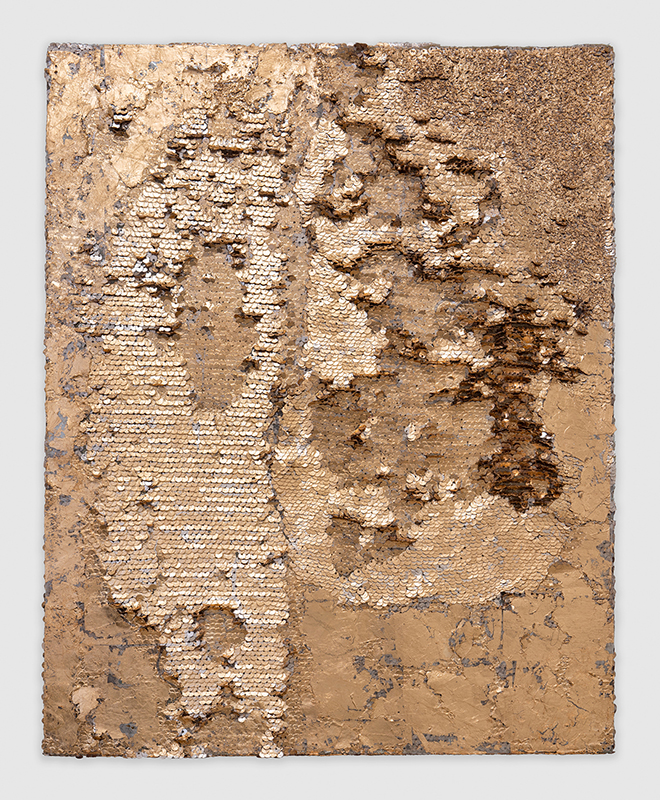 Unspooling the cosmic metaphor a bit further, Tallmadge has invested these works with a certain timelessness, geologic in breadth, that seems to span millennia by the hundreds. There’s something ancient and fire-blasted about them. Indeed, some look very much like metallic lava of impossible purity, somehow produced in the igneous cataclysm of a volcanic eruption. Or perhaps they’re the product not of catastrophe but unending, unyielding metamorphic heat and pressure, like gemstones. In any case, time hangs heavy on them. Little wonder, perhaps, that a 2018 exhibition Tallmadge had at Marquee Projects in Bellport, N.Y. was titled “Deep Time.” For its part, Brooklyn’s Carvalho Park gallery, where Tallmadge had a show in 2019, termed the Cincinnati native’s work “nebulous and spectral.”

This is what you hope for when you’re a serious art student. Shortly after Tallmadge got out of grad school, David Klein mounted a solo show for her in 2016. Her work has also been exhibited in New York City, Seattle, and Chicago. Prestigious residences she’s snagged include ones at the Oxbow School of Art and the Yale Summer School of Art.

For her part, Tallmadge says in her artist’s statement that she wants to create “elusive, experiential paintings that activate the viewer’s body through their seductive light-based surfaces.” They’re meant to evoke, she adds, “degraded urban surfaces or worn rocks you would happen upon in nature.”

The online, French-language mezzanine notes that Tallmadge “does not paint canvases. She creates atmosphere.” The journal added, “With her, the celestial immensity becomes tangible, though always remains mysterious.” For her part, the artist responds to a question by noting that her paintings “are also a reflection of my daily life in New York. The asphalt surfaces, the worn-out sidewalks, and subway walls furnish my subconscious.” 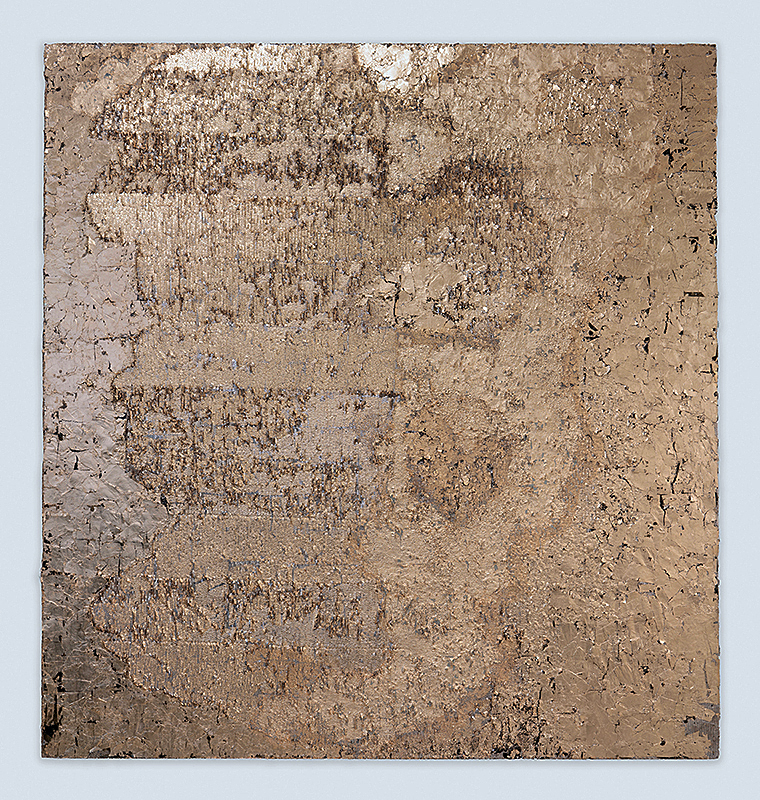 The natural material that Tallmadge employs most, jammed up against her beads, glitter, and sequins, is mica. There’s an intriguing balancing act going on here between, to use the terms very loosely, the feminine and the masculine. Falling into the latter category are surely the chunks of glittering mica – a shiny form of silica that breaks into wafer-thin, translucent layers—that Tallmadge employs all over her thickly textured canvases. There’s something in mica’s very instability, always threatening to fracture, that plays a role here as if to say, “I glitter, but beware – I’m also brittle. I shatter.” 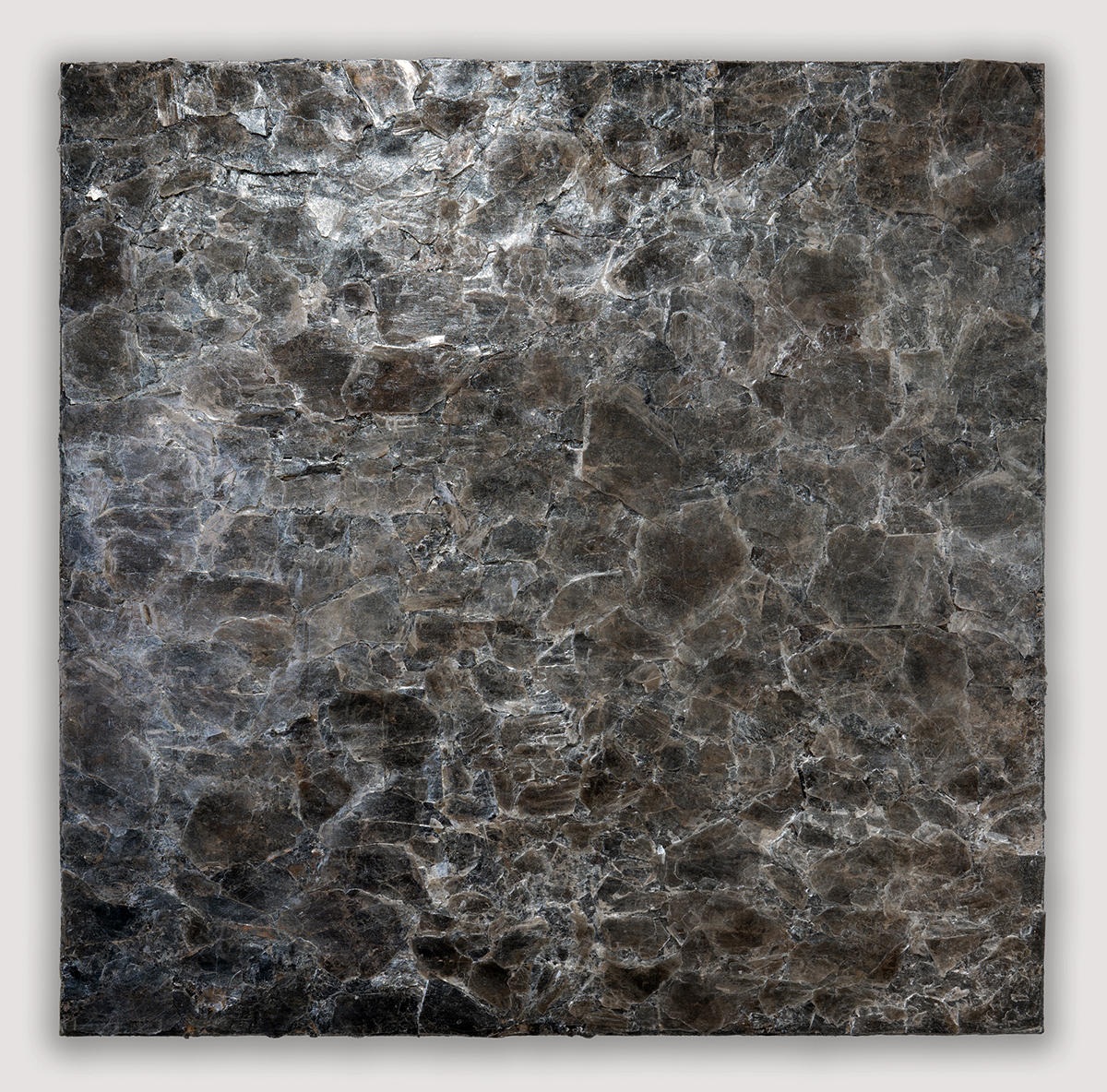 These qualities are on full display with “Omen” and “Estuary,” both crafted from larger pieces of mica stone and pumice. They’ve got smoother surfaces, a break from Tallmadge’s rich impasto elsewhere, and are less raked and eroded than many of the other works on display. “Omen” almost looks like one sheet of black-brown glass that’s been violently shattered but still miraculously holds together. “Estuary,” despite its riverine name, when viewed up-close, looks a bit like the inside of an astonishing geode when you’ve sawed a rock in half and polished the surface.

By contrast, “Cross Section XII,” fabricated with powdered glass and pewter leaf – Who knew?— is blistered and brooding. To return once again to the planetary metaphor, it looks a bit like a silvery moon that’s been battered and scoured by solar winds and remorseless radiation. 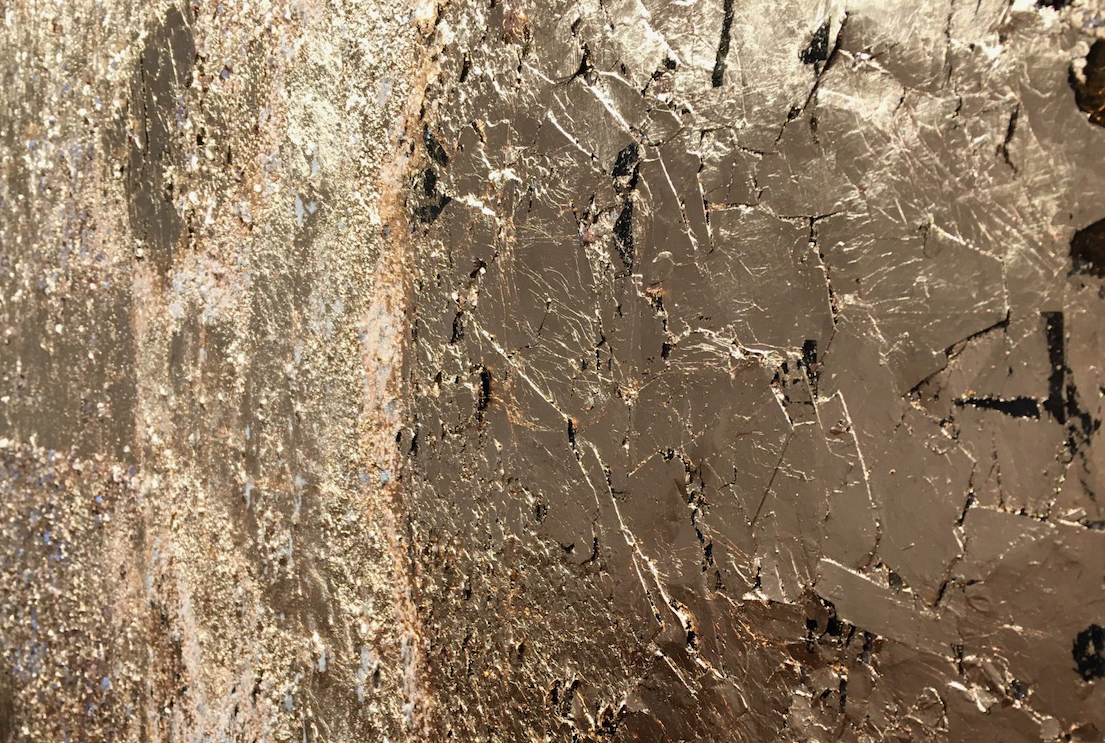 Particularly with the most heavily textured canvases, it’s fun to examine the surface off to one side and at an acute angle to maximize your appreciation of just how 3-D and stratified these meticulous constructions really are. It’s also gratifying that this is a spaciously hung show, with no cramming works together in unnatural, close proximity. This is important in part because of the glow most of these give off, a nimbus you wouldn’t want competing with radiance from another work right next door.

“Rosalind Tallmadge, Terrain” will be up at the David Klein Gallery in Detroit through Dec. 18, 2021