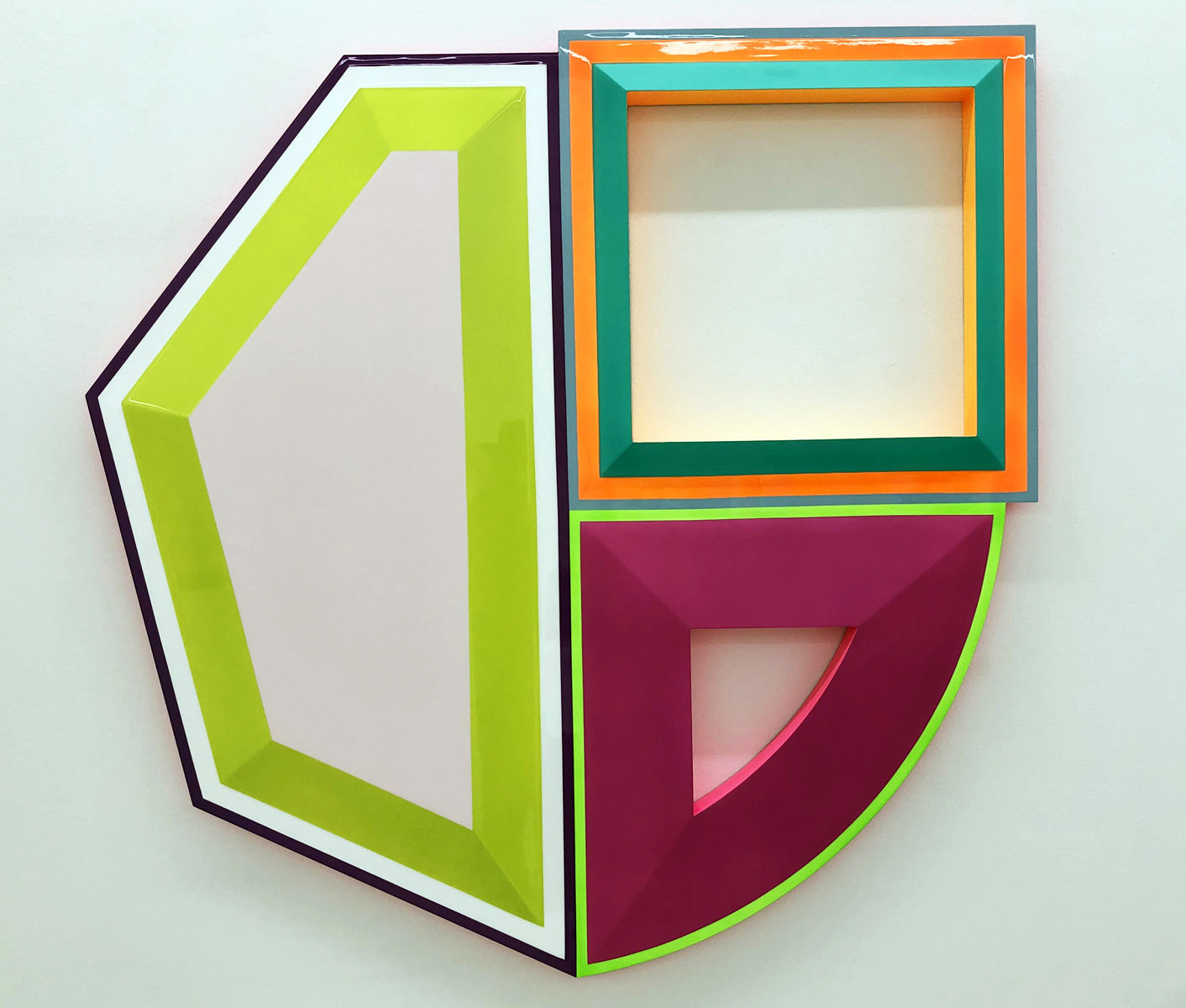 Zenax, an exhibit featuring thought-provoking work by two creative voices in dialog, is on view at the Library Street Collective until January 6. Detroit artist Beverly Fishman and California painter Gary Lang have combined the words Zen and Xanax in the exhibit’s title, creating a neologism that deftly names each artist’s thematic intent. The work of both bears a passing resemblance to the self-referential minimalist paintings and constructions of Frank Stella and Kenneth Noland, but Fishman and Lang appropriate and subvert the memes and tropes of 1960’s and 70’s minimalism to achieve their very different–and quite specific–goals.

Fishman’s wall constructions speak the language of manufactured consumer products, of blister packs and digital devices. But most especially they speak the language of pharmaceuticals. As part of her ongoing studio practice, she explores the implications, both good and not-so-good, of pharmacological self-modification in emotion and behavior.

Fishman has researched, online, the seductive shapes, colors, and surface sheen of pills and drug packaging to develop her idiosyncratic visual vocabulary. Using these found shapes as source material, she begins her creative process with collages in a variety of materials and in colors that range from the fleshy pink tints of makeup to paint sample colors from the hardware store. Specialists then fabricate the slightly convex trapezoids, rounded polygons and bisected sections of circles. They are finished with smooth, featureless surfaces in consumerist colors, which are assembled into the final artworks. Fishman links the slickly constructed components based on her intuitive sense of how the shapes and colors interact. Her compositional intention is tore-configure and re-arrange them “until they finally surprise me.” 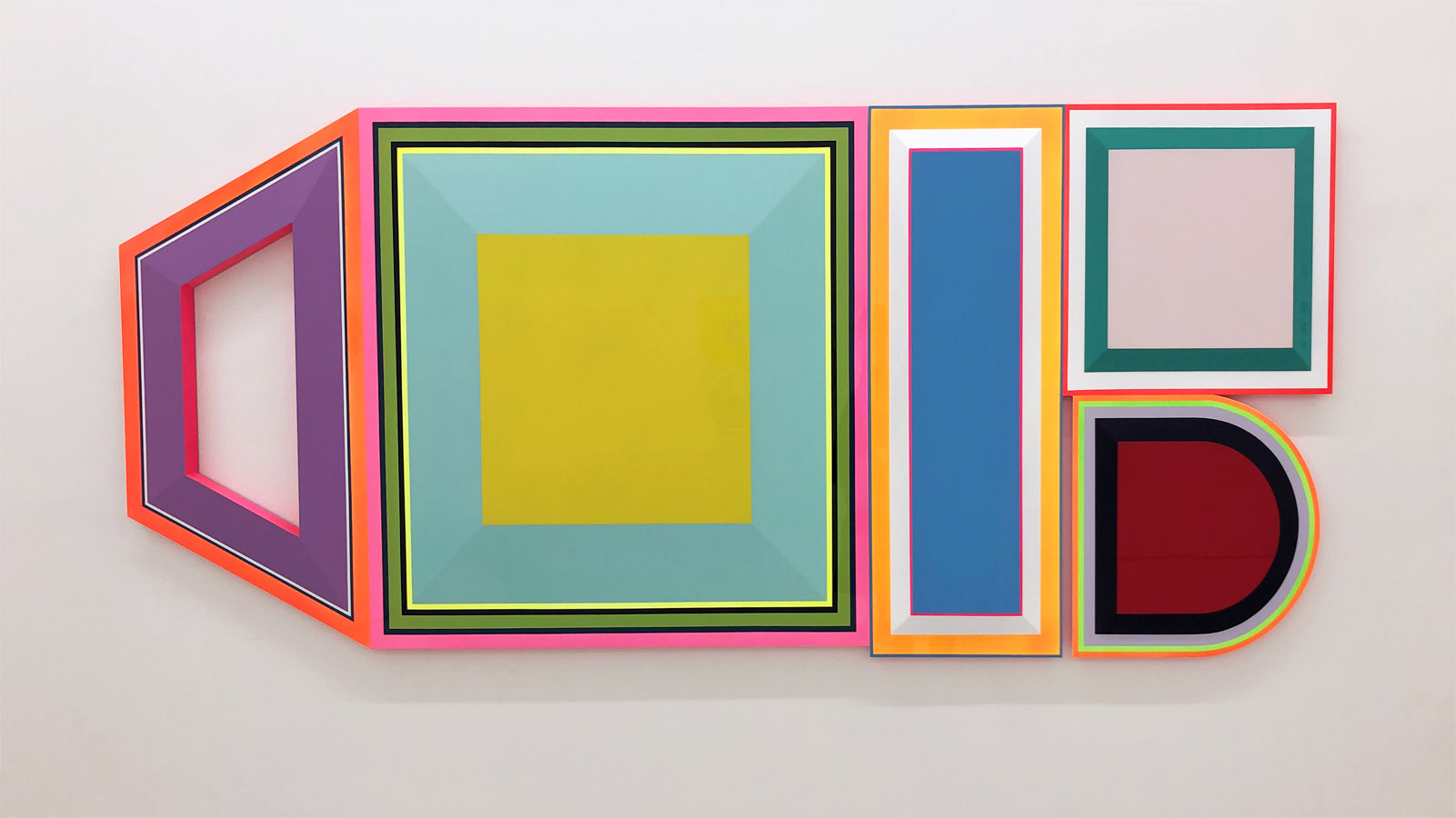 Fishman’s 5-piece wall construction, Untitled (high blood pressure, depression, antipsychotic, depression, anxiety), is the largest of the four pieces she has contributed to Zenax, and showcases her creative strategy. The color palette is an aggressively pleasant combination of pastel and neon hues that are at once both attractive and slightly ominous. The consumer-friendly colors—pinks, aquas and burgundies—are bordered by neon reds, greens and oranges that both unify the composition and militantly guard the boundaries of the constituent shapes.

Perhaps more than most artists, Fishman uses the titles of her wall constructions to guide the viewer toward her underlying theme. She both praises and condemns modern medicine for giving us the dubious capacity to deliver social control on a molecular level–scientific advances with unexpected side effects. Her somber observation:  pharmacology has advanced to the point that drugs can control not only how we behave, but what we are allowed to feel.

After the chilly perfection of Fishman’s shaped artworks, the three paintings by Gary Lang in Zenax seem almost lyrical. While subtle, the sweep of his brush and its interaction with the surface of the painting is palpable and ever-present. Lang works within the same visual language of geometry and optics as Fishman, but his aim is transcendence. His meditative use of repetition and a highly organized, yet intuitive compositional methodology results in paintings that seem to vibrate with silent energy. 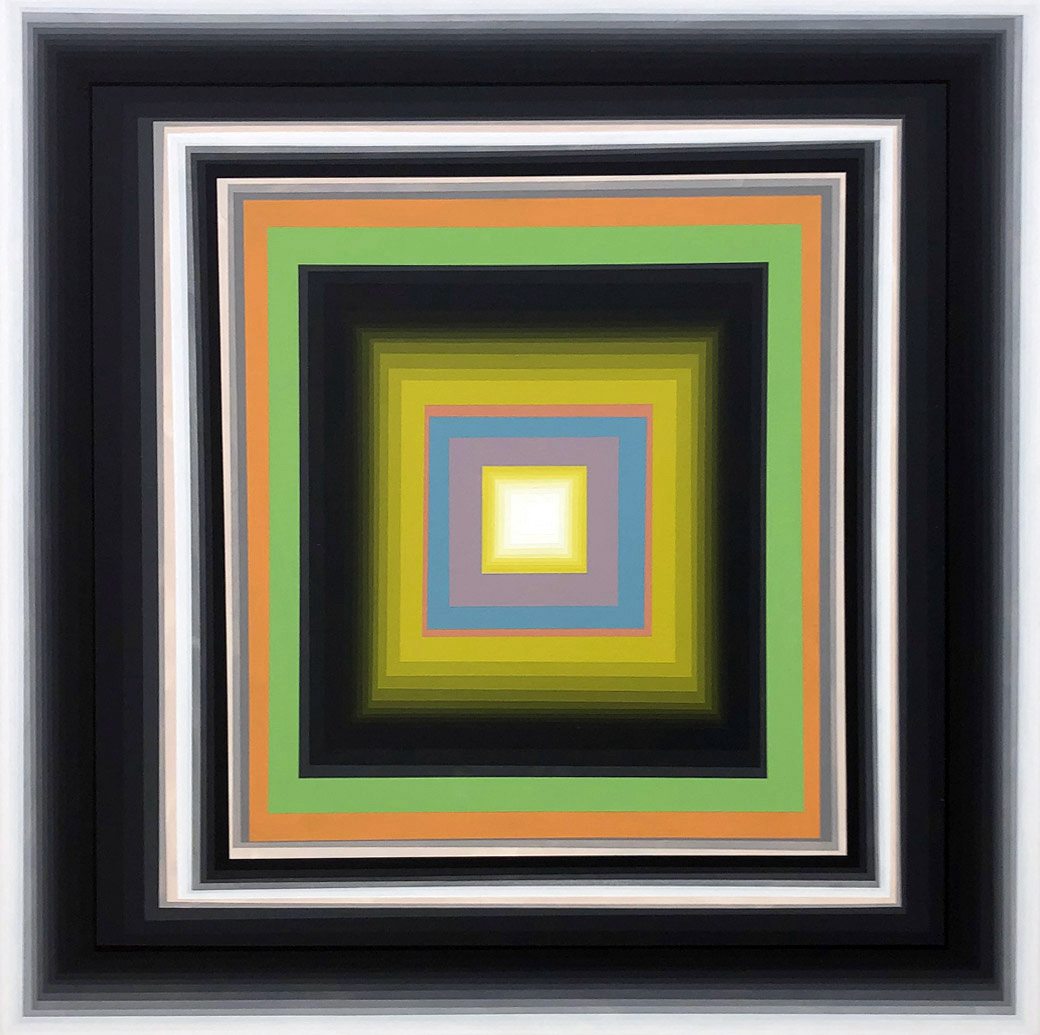 Lang skillfully wields the optical properties of his colors to manipulate the perception of the space within his paintings. Maverick 2, shows this strategy at work. A black square-framed in white marks the outer boundary of the painting. A thinner black and white frame repeats the outer boundary and seems to invite entrance. Two flat bands of green and orange mark the surface of the inner picture plane, with a gray shadow seeming to raise them slightly off the surface. Lang leads the eye into the fictive space behind the surface with carefully calibrated, concentric veils of translucent yellow-green. Yet another double band of flat color delivers us–finally–to the glowing inner core of the painting.

His painting ROR bears a passing resemblance to the Ojo de Dios, a native American votive object, and provides another clue to the meditative aims of the artist. The repeated black diamonds alternating with flat primary bands and the graded yellow-green layers fading into white light once again beckon the viewer toward a higher state of being. 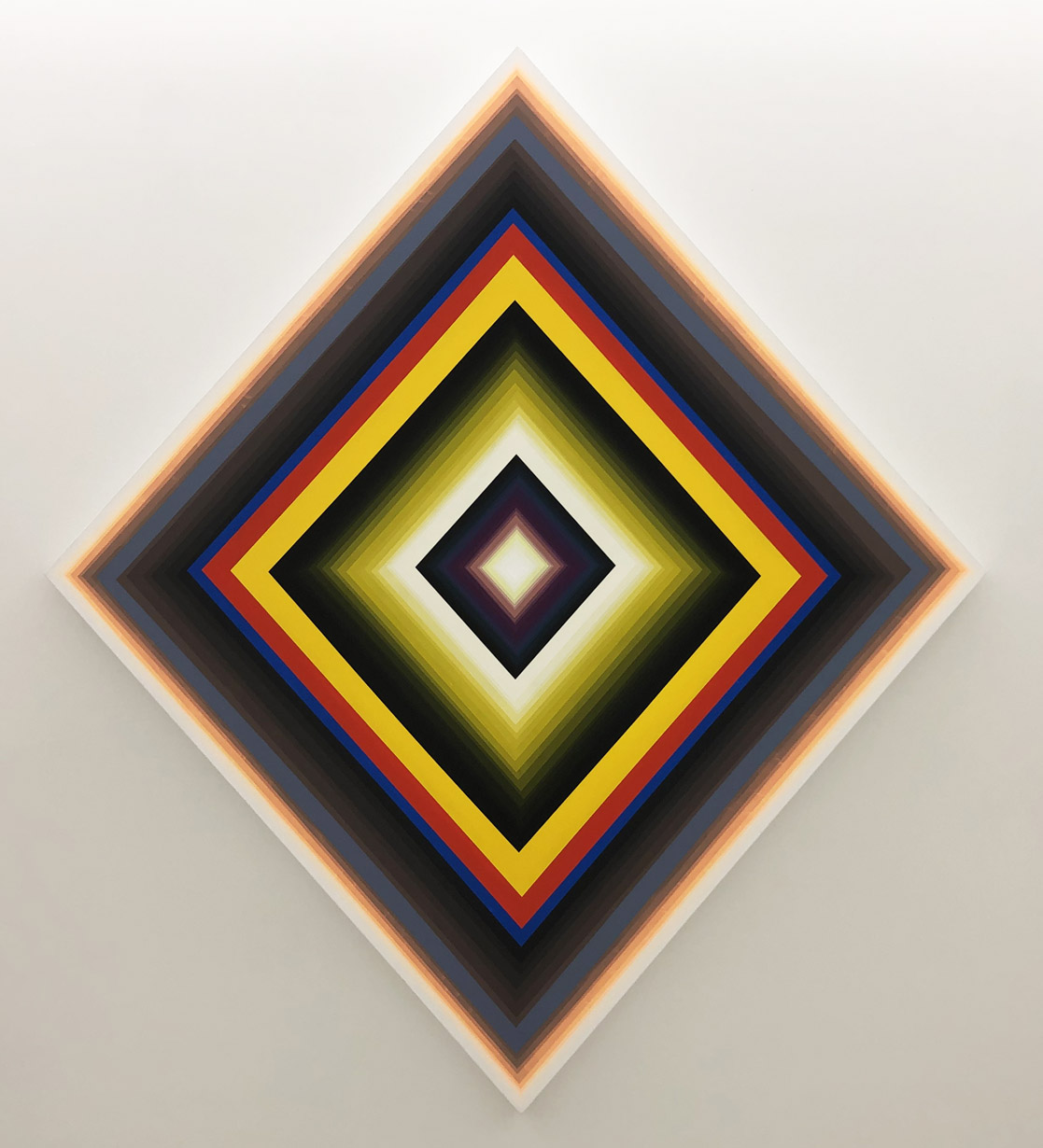 While the alternating and telescoping colors within the paintings appear calculated, for Lang they are intuitive. In a 2015 interview with Eric Fischl, he describes his method: “I juggle colors and spatial ratios compulsively prior to painting in order to get a mutable footprint, and adjust and articulate my notations spontaneously once [I am] painting.” The result is a body of work that invites comparison to sacred objects and altered states.

The artworks in Zenax share a common formal vocabulary that allows an interesting dialog between two artists who wield similar means toward contrasting ends. Fishman flatly rejects the purely formal; her work is specifically referential and represents a kind of socially engaged abstraction. Lang’s aims are specific as well but refer to the life of the spirit. Consciousness is the subject at hand for both artists though: its nature, its susceptibility to alteration by means pharmacological or spiritual. It’s a conversation worth having.