“King Tutankhamun: ‘Wonderful Things’ from the Pharaoh’s Tomb” at the Charles H. Wright Museum of African American History” through August 22, 2022.

Installation image of “King Tutankhamun: ‘Wonderful Things’ from the Pharaoh’s Tomb” at the Charles H. Wright Museum of African American History. All images courtesy of DAR, unless noted.

Detroiters asked for it, so 100 years after British archeologist Howard Carter discovered his tomb, King Tut and his fabulous furniture are back at the Charles H. Wright Museum of African American History with “King Tutankhamun: ‘Wonderful Things’ from the Pharaoh’s Tomb.”  It’s a glittering show it’d be silly to miss.

Comprised of 130 meticulously recreated artifacts that took over 10 years to make (the real deals from the Cairo Museum only toured in 1976), “Wonderful Things” was a big hit for the Wright in 2008, and museum officials admit there’s been sustained clamor ever since to bring it back. (The quote in the title, by the way, was Carter’s gasping response when asked what he saw when he first peered through a drilled hole into the tomb.)

One conclusion you won’t be able to escape — those ancient Egyptians, and here we’re talking the 18thDynasty when Tut ruled, sure were nuts about their gold. It’s hard to find an artifact here that isn’t gilded, and each and every one pops against the Wright’s color-saturated walls. 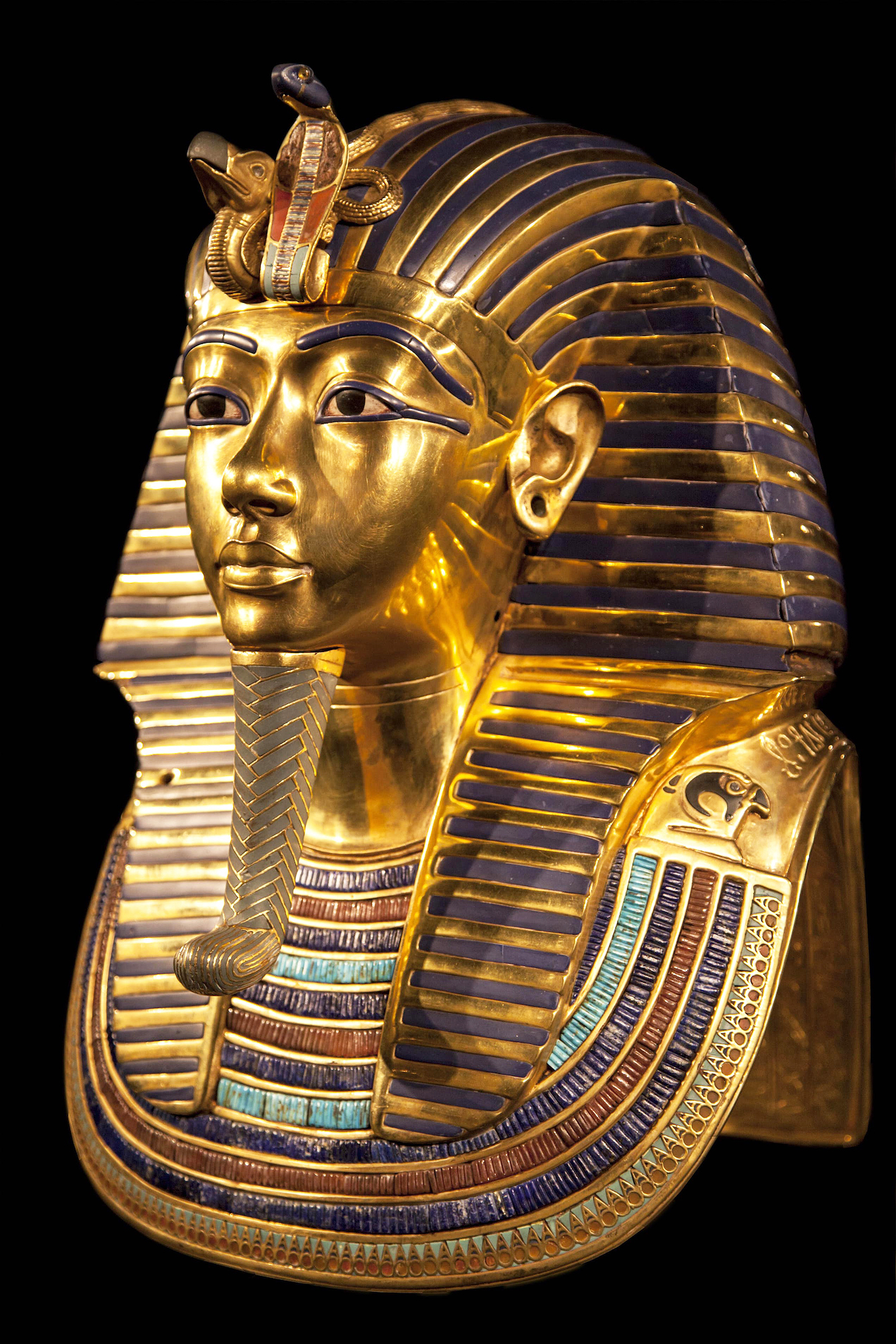 So it’s easy to understand Carter’s astonishment when he got that first glimpse: “As my eyes grew accustomed to the light,” he would write, “details of the room within emerged slowly from the mist, strange animals, statues, and gold—everywhere the glint of gold.” Among items on display that he discovered, you’ll find Tut’s iconic gold mummy case, his throne, child’s chair, a statuette of Tut throwing a harpoon, an embalming couch, bed, jewelry, the dazzling royal mummy itself and the astonishing, and super-famous, funeary mask — probably the one image that almost everyone around the world remembers.

Tut is called the boy-king for good reason – he ascended to the throne when he was just 9, and died about a decade later, probably of malaria and complications from the inbreeding typical of Egyptian royals. (His wife was his half-sister, daughter of Nefertiti.)

But we’re lucky any of this treasure was ever found. Back in 1922, Carter had been searching for Tut’s underground tomb in the Valley of the Kings for years, with nothing to show for his pains. Just as the British earl funding the research was about to pull the plug, the archeologist decided to excavate the ground between the tombs of Ramesses II and Ramesses VI. Carter wasn’t holding his breath. The vacant plot showed some evidence of workers’ huts that might have been erected during the construction of one of the nearby crypts, and it seemed unlikely they’d be allowed to camp out on top of a pharaoh. 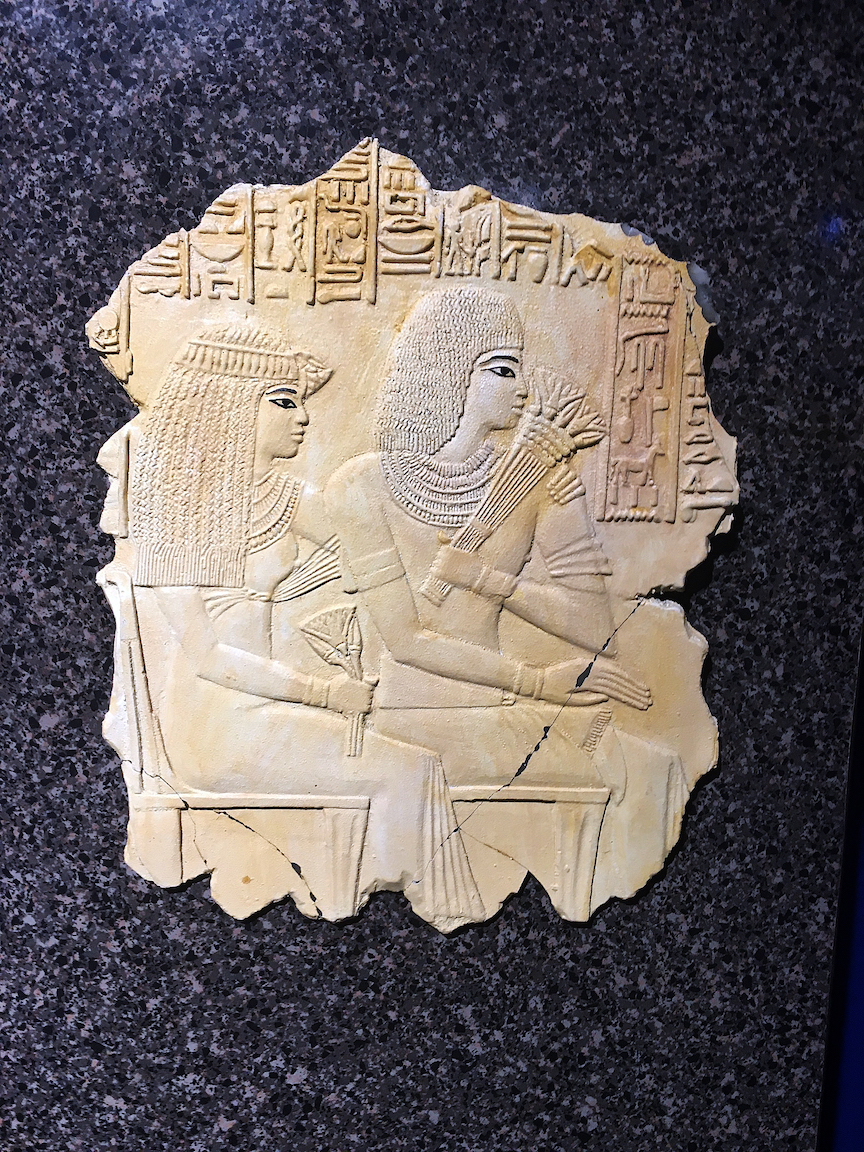 “Relief of a Noble Couple at a Banquet,” 18th Dynasty, Louvre Museum

All the same, Carter’s men began digging and eventually discovered a stairway, gateway to the extravagant tomb. As Steve Martin put it on “Saturday Night Live,” King Tut’s “condo made o’ stone-a” consisted of four rooms – an antechamber, which had been ransacked, and the untouched annex, burial chamber and treasury, where some of the most remarkable finds were located, beyond.

Interestingly, at the start of the excavation – after workers dug down to where the stairway ended at a door marked with symbols of a royal necropolis – Carter had them fill the entire thing back in and posted guards. He wanted to get his patron, the fifth earl of Carnarvon, to Egypt before he pushed into the tomb itself that November, and wasn’t going to take any chances that vandals might discover the tomb before then.

For its part, “Wonderful Things” is loosely divided into five sections covering ancient Egypt, the archeological discovery, the “private” pharaoh, the “public” pharaoh, and the royal burial. Dominating the center of the first gallery is the “Golden Canopic Shrine and Tutelary Goddesses,” a tall, lavishly gilded chest mounted on a sledge that held the embalmed viscera of the young king. Surrounding it are four gilt goddesses, each responsible for safeguarding a different internal organ – the liver, lungs, stomach and intestines.

The “Shrine” didn’t make the trip from Egypt to the U.S. in 1976 (amusingly, all artifacts were transported by the U.S. Navy). So if you’re at all chagrined about looking at replicas rather than the original, bear in mind that you wouldn’t have found the “Shrine” or the casket with its embalmed Tut in the original 1976 show. 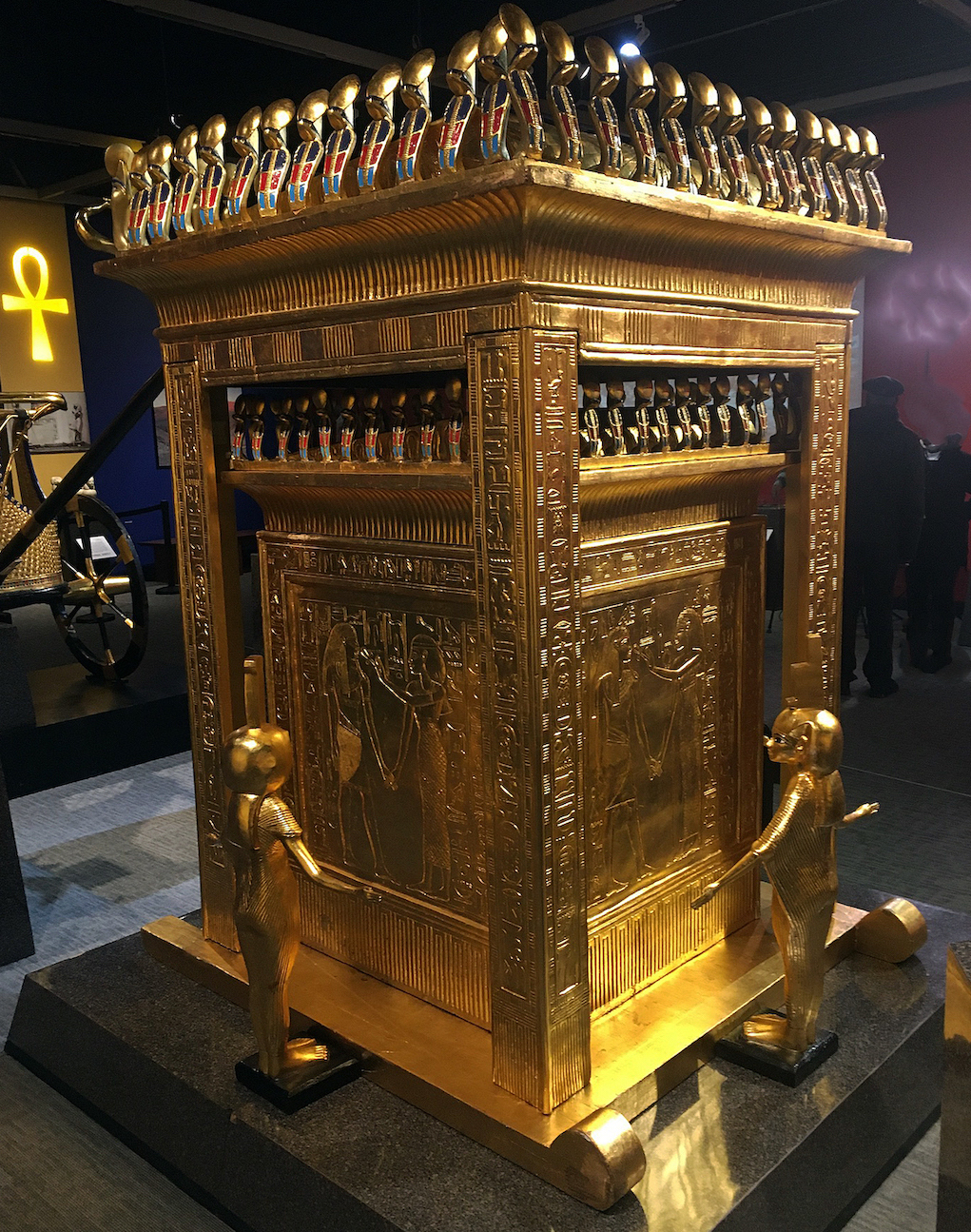 There’s no denying the shrine is a striking monument, but it gets a lot of competition from the reconstruction of Tut’s “Golden State Chariot,” which would make any kid tooling around town look cool, as well as the gilt, open casket containing a recreation of Tut’s withered, embalmed, and very black body. (Note to parents – little boys will love this one.) All the artifacts in the show, by the way, were created by artisans using the same techniques as the ancients as far as they could. Intriguingly, the coffin – which in real life was solid gold — was first sculpted in foam, then covered with polyurethane and painted.

As it happens, the Egyptian embalming process blackened the skin. But it still raises the old question as to whether Tut resembled contemporary Egyptians or south-of-the-Sahara Africans. One of the reasons the Wright was interested in a Tut exhibit 13 years ago, said Patrina Chatman, curator of collections and exhibitions, is because emerging research suggests the boy-king did not have the light skin we associate with the Arab world.

Noting that some statues, like “The Guardian,” are ebony black, Chatman said, “The point is that ancient Egyptians were not the ones we see in the movies, but members of a dark race,” adding that Tut and his family had Nubian blood mixed with the Egyptian. 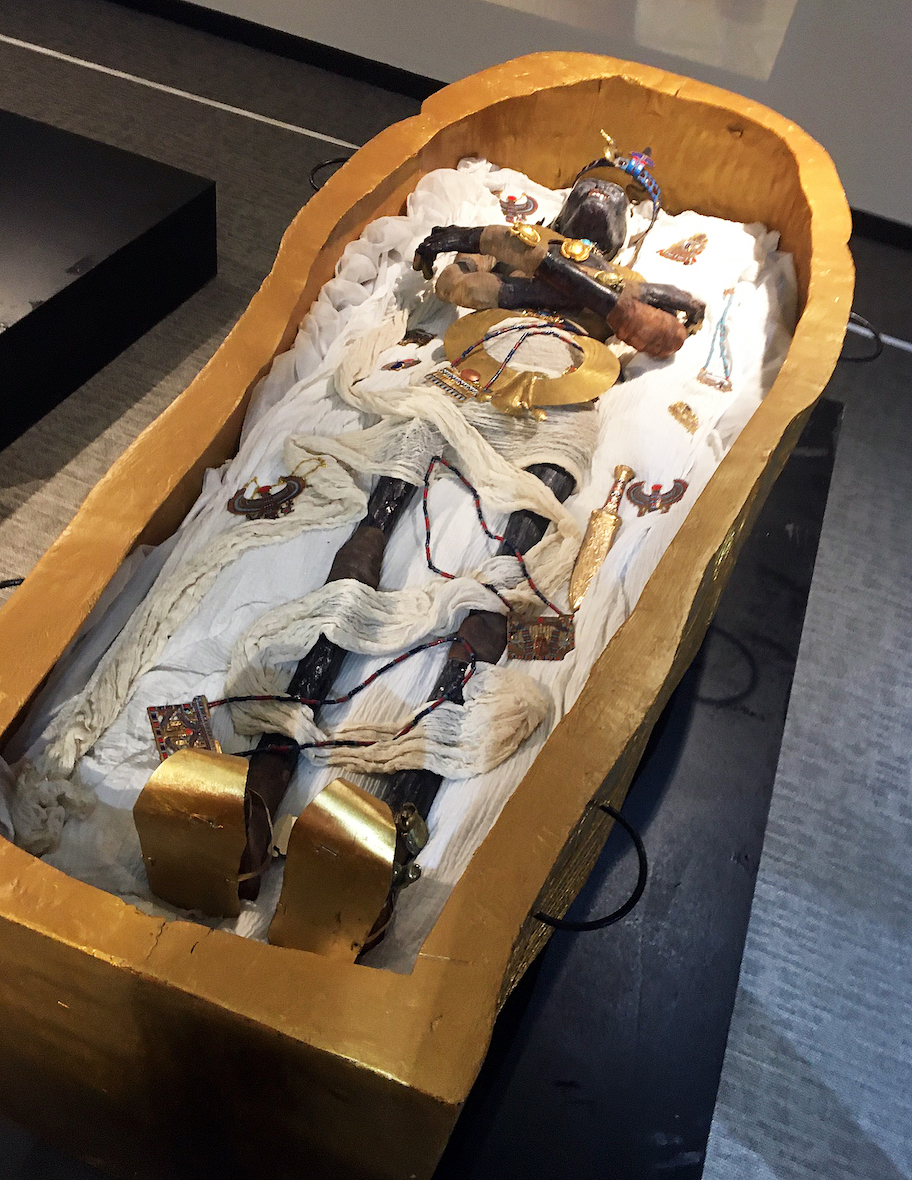 Truth be told, King Tut – who ruled from 1333 BCE to 1323 BCE – was not a particularly important pharaoh as these things go, no matter what the boy-king himself might have thought. That said, he had no way of knowing that his would be the most-famous tomb ever discovered — one in which vandals only made it into the first chamber, and not to the greatest treasures beyond. A bit like Imelda Marcos and her shoes, King Tut would become a worldwide symbol and legend based almost entirely on his accessories. Lucky boy.