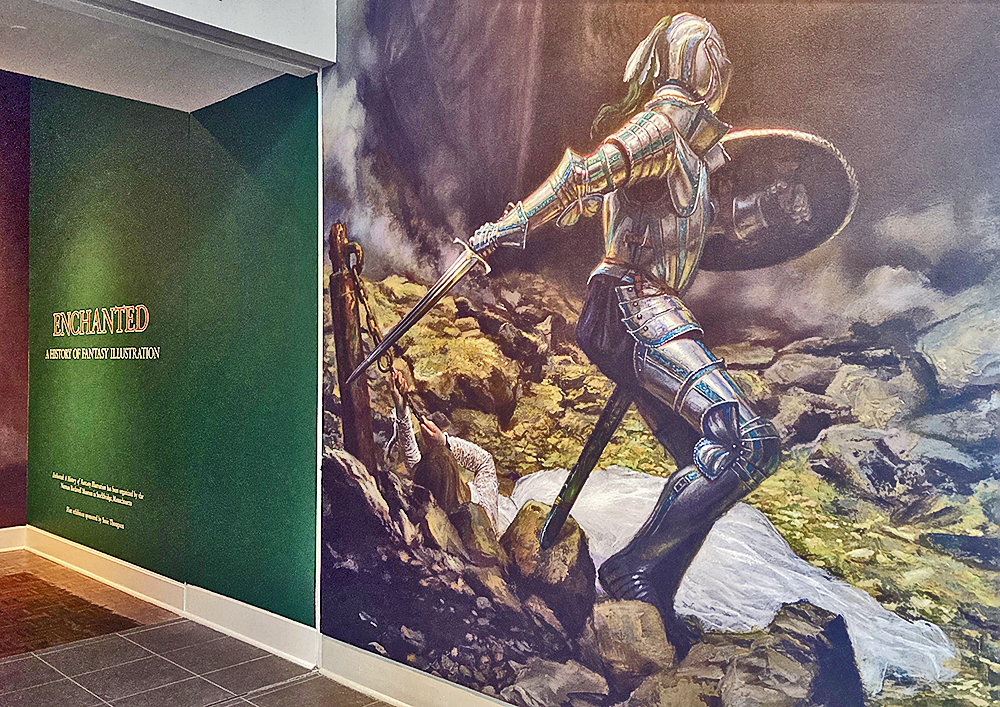 View of exhibition entrance with a large-scale digital print of St. George and the Dragon by Donato Giancola, oil on panel, 2010. All photos: Ashley Cook

The role that enchantment has played in the history of storytelling dates as far back as 2100 BC with The Epic of Gilgamesh, which is considered the point of emergence of the hero’s journey and various fantasy archetypes that we know so well today. The dragons, great floods, serpents and treks through the underworld are just some of the elements that have reliably appeared in scenes of imaginative tales told through time, so much so that the world-building efforts of fantasy writers have constructed an actual parallel universe complete with its own rules, landscapes, species and lessons. Since this first rendition of the dragon, writers and illustrators have contributed to further developing this place that conveniently mirrors our own to serve as a tool for catharsis, entertainment and morality. Enchantment: A History of Fantasy Illustration is the first ever full-scale exhibition to take a serious look at the expanse of this genre and its influence on the history of art, religion, popular culture, and subcultures, with a timeline of works spanning from as early as 1589 to as current as 2021. 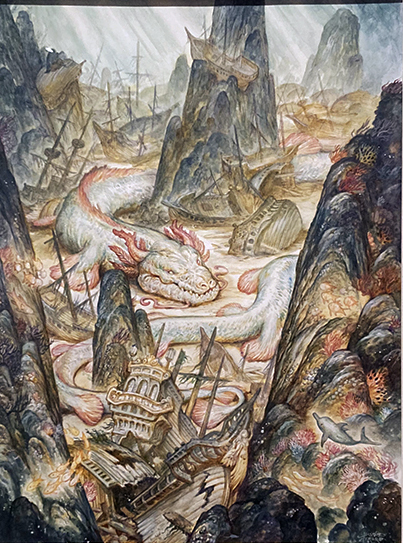 Justin Gerard, Lair of the Sea Serpent, watercolor on paper, 2019.

Two large galleries of the Flint Institute of Arts have been reserved for over 150 original works; the collection was curated by Jesse Kowalski of the Norman Rockwell Museum in Massachusetts, where Enchantment was first shown. It is not surprising to learn that Kowalski has worked on a number of exhibitions that highlight illustration and fantastical subject matter. A text for this exhibition asserts that “the many facets of fantasy illustration have often been misunderstood or overlooked” and this observation seems to be one of the driving forces behind these curatorial efforts. 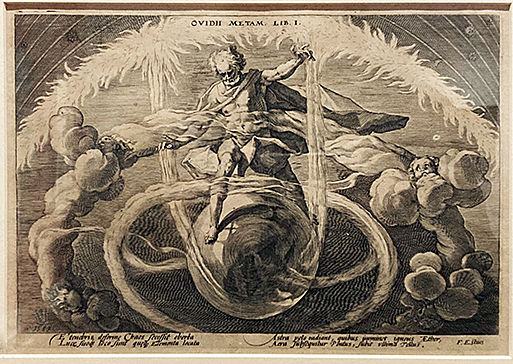 Guests who are familiar with the Henry and Hodges galleries of the museum may notice the walls were freshly painted to set the tone for the rich colors and dreamy compositions of the show. Appropriate to the setting, the styles in which most of these pieces were done employ classical techniques like oil painting, etching, watercolor, and pencil drawings, with the occasional works rendered digitally by the 21st-century artists of the group. One may even occasionally forget that they are looking at scenes from a world of mythical landscapes and not from our own classical kingdoms of the past, as there is so frequently a thematic and aesthetic overlap between the two. Artworks like A Deep Sea Idyll by Herbert James Draper, Garden of Hope by James Gurney, or Allegory by Omar Ryyan place terrestrial beings and elements into impossible realities with a conviction akin to the old masters, and this blurring of the boundaries between imagination and reality is what makes fantasy so powerful. 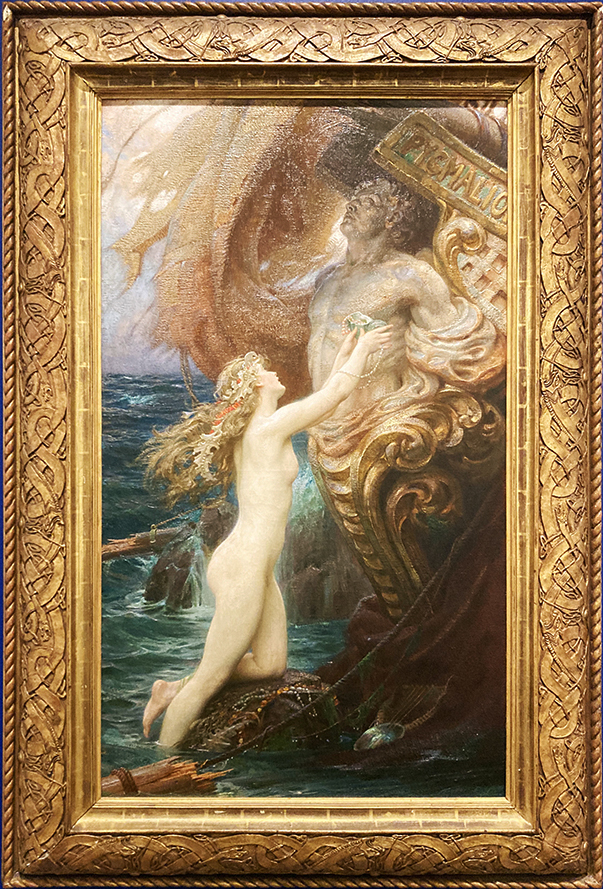 The show has the potential to please visitors of many ages and backgrounds. For those whose palates are less versed in the world of fantasy, the exhibition space becomes a place for learning, with many sources of in-depth information and insight to contextualize the surrounding works. Along with exhibition texts focused on some essential aspects of fantasy including storytelling, adventure and the play between good and evil, there are also information plaques about each individual artwork which note the background of the artist and their role in the lineage of fantasy illustration. Taking in this information may be as enjoyable as basking in the quality of the material application or the beautifully carved frames surrounding the art, but for the visitors who are fantasy connoisseurs, it could be particularly special to read that some of the artworks before them were made for productions as big as The Lord of the Rings or Game of Thrones. In fact, almost all of the artworks included in the exhibition have played an important role in the history of fantasy illustration throughout time. 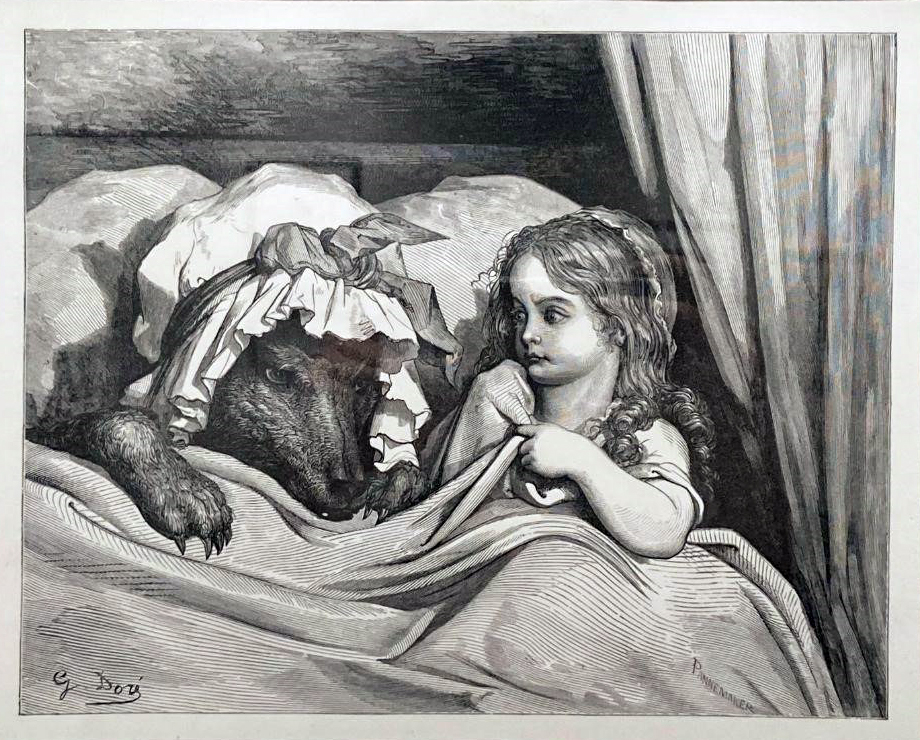 What is interesting about this show is the breadth of work it covers, successfully linking old masters like Gustav Doré, Hendrick Goltzius, Arthur Rackham and Howard Pyle with emerging artists like Victo Ngai and Wayne Barlow. Despite all of the artworks being displayed in a traditional museum style, framed and hung on a wall, many of them were actually originally produced for films and books. There are comic book illustrators like Hal Foster with a drawing from the Prince Valiant series and Dan Dos Santos with the illustration of Red Rose made for Fables. Then we have pulp fiction illustrator Mark Zugs with The Princess of Mars, which was produced for the cover of Mars Trilogy, a compendium which contains original novels originally released in 1917-1919 by Edgar Rice Burroughs.  Henry Clarence Pitz’s Dark Water then brings us back to the early 20th-century ink on paper renderings, predated by the oil painting The Other Side by Dean Cornwell, yet throughout this extensive lineage, a strange consistency has been handed down from generation to generation that allows for almost anyone who has been read a fairy tale to feel at least somewhat at home. 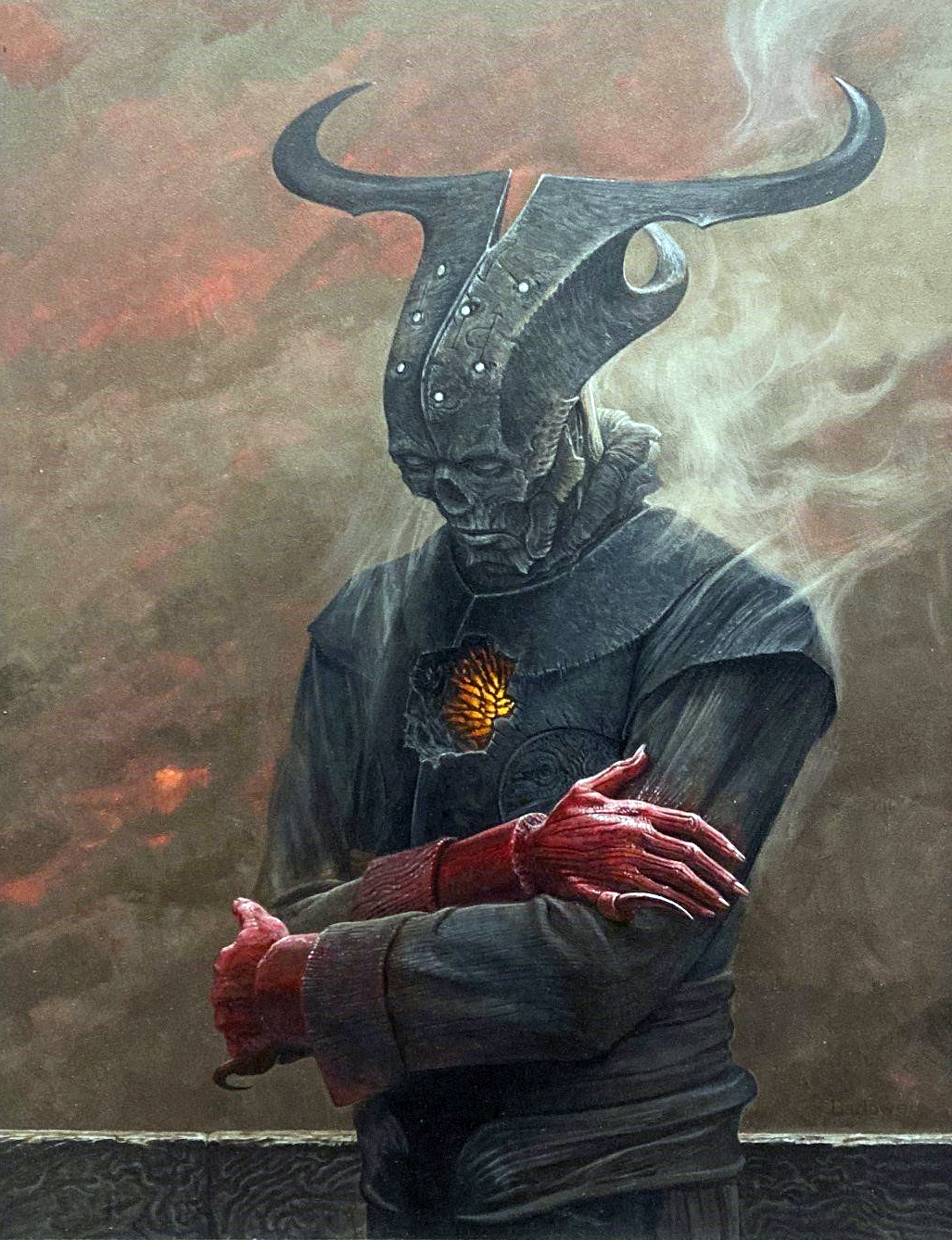 Enchanted: A History of Fantasy Illustration opened September 24, 2022 and is on view until January 8, 2023. Please visit https://flintarts.org/ for more information.